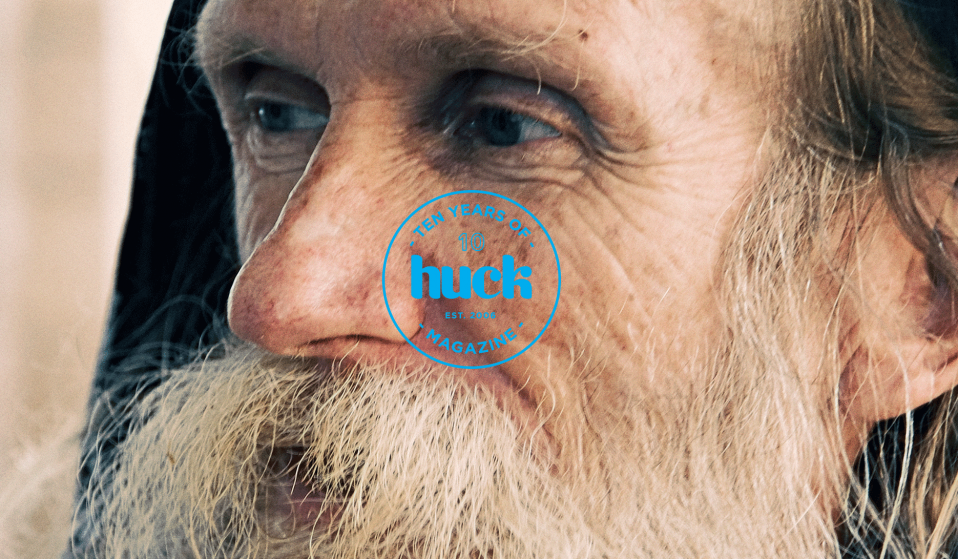 We head to Jeffreys Bay, South Africa, to catch up with the enduring living legend of Bruce Gold.

To celebrate 10 years of Huck, we're digging through the archives to unearth stories that feel as relevant as ever. We head to Jeffreys Bay, South Africa, to catch up with the enduring living legend of Bruce Gold.

Jeffreys Bay, South Africa. A tall, old man appears quietly on the wooden boardwalks on the dunes overlooking the point, amongst the exploding orange aloes, and clusters of coffeeclutching surfers. Incongruous amid their hip labels, the codger looks like he has stepped out of Alby Falzon’s Morning of the Earth.

He’s wearing torn, bright rainbow-hued pants, a leather waistcoat, and all manner of leather pouches and ankh-shaped artefacts which dangle under his straggly white beard. He greets a few locals and squints into the breaking day as a set rolls in. He then approaches you and a mutual friend and blurts out a vibrant “Shalom Chom!”, adding that he’s noticed a lull in the crowd and he’d better get on it before the sun gets too high.

Your acquaintance then introduces you, and you bump fists. “Fine Weather Positive,” he smiles a toothless grin, and offers you a piece of grapefruit (which you politely accept), before he moves off with surprisingly sprightly intent. As you splutter on the bitter citrus, you realise you’ve just met a living legend, as much part of J-Bay as the pelicans and dolphins, and the town’s last true hippie: Bruce Gold. Bruce, who celebrated his sixtieth birthday in 2007, is one of the few sexagenarians to brave the cutthroat line up of J-Bay’s ultimate arena, Supertubes. He’ll tackle it up to six feet plus, although if it gets any bigger, he’ll usually either go down to the mellower waves of Point, or take up his place in the peanut gallery overlooking the surf with the other old timers.

It’s only around four feet today though, and as you paddle out a while later, you see him sitting in the line up with the same hat on, bidding a passing seagull top of the morning with equal friendliness he did you. Although he tends to go straight, his arms often raised in an old-school, soul-arch ‘salute’, Bruce’s wave knowledge, honed over four decades, is obvious, as he steers and trims his favourite 8’2” effortlessly through the racy Supers sections, to the appreciative hoots of those paddling out.

As one of Jeffrey’s Bay’s longest full-time surfing residents, Bruce remembers when the first Americans arrived in a Land Rover in the early 1960s with cameras, and how the few local surfers (mostly ferals camping in tents on the dunes), thought that this sacrilegious appearance was the beginning of the end. Of course, it took a while for the crowds to reach the apocalyptic levels of today, so back then, the main problem for Bruce and his fellow itinerant ‘pot smoking hippie’ surfers was steering clear of the conservative Afrikaans community, with whom they had to share the small fishing town.

For a while he lived in a derelict house held together with wire, and at times has been without a fixed address, but Bruce now stays alone in a former servant’s quarters in a mansion belonging to an American surfer, Kurt, where he tends to the garden overlooking the entire bay. Bruce has had a few women in his life, but is laughingly averse to marriage, saying it is the enemy of surfing freedom.

He’s got few possessions, besides scores of shells and other flotsam and jetsam collected on the beach, and two-dozen surfboards ranging from a rare Midget Farrelly single fin to a Joel Tudor fish. Bruce grins as he taps a metal chest, and explains how it contains the last possessions of his mate Miki Dora. He explains how Da Cat asked him to never open this surfing Pandora’s Box, but he jokes, “Dora always used to say, ‘Don’t sell out’, but I’m thinking of auctioning off the contents when Leonardo Di Caprio brings his movie out.” “Selling out” or, in fact not selling out is something Bruce discusses often. He jokes that pro surfers are ‘whores’ even though he’s on firstname terms with many of them, and is not averse to scoring a bit of free product himself. Always the true hippie, however, Bruce gets by on minimal ‘bones’ (his term for cash) and sustains his bohemian lifestyle by flogging shells that he picks up on the beach, bartering, and surviving through his amiable, raconteur nature from the generosity of others, prompting one local to remark, “Bruce can always find a hot meal in J-Bay.”

Although he’s sometimes known as ‘Boozer’ (a nickname from his youth that he hates), Bruce’s longevity and survival also stem from careful habits. He is fastidious about staying away from sugars and fast food and he cooks up a mean stew. His philosophies include an equal fascination with religion, unicorns and far-out theories. These make, if you are so inclined, for hours of fascinating conversation – be it in the sober light of day, or late at night over a few sly cigarettes or doobies following yet another J-Bay party. “I’m still a kid,” Bruce is fond of saying, especially after a few ales.

However, in a more pensive mood late one night, Bruce concedes that Jeffrey’s Bay is perhaps not the place for him anymore. The town is far removed from the short-lived, mushroom-enhanced, surfer nirvana era he’s never really grown out of. It’s now a crowded, gaudy holiday resort, a fast-living place known to corrupt old-timers and teenagers alike. In fact, many of the latter also consider Bruce himself something of a relic – although it’s hard to imagine J-Bay without its unofficial mayor and very own Gandalf. One bright Sunday morning, as he is preparing to go surfing down at nearby St Francis, Bruce dons a towelling shroud to protect himself against the fierce African sun and thwart skin cancer (he’s already had surgery a few times, but reckons that sun cream is toxic). He clowns around with a wooden staff, completing the visual analogy to the Tolkien character. He humbly declines a seat in the front of his nephew’s ute and jumps in the back with his small dog, Scooter-Girl, with adolescent excitement. “You know what the cowboy said when he lost his dog?” he calls out before they leave. “Doggone! He said doggone, bru.”

If you are ever in J-Bay and see this friendly, unmistakeable old surfer, go and greet him and get him to tell you a story or a joke. He’ll be happy to oblige. You’ll have met a living part of local surfing history and, who knows, you might even score a free wedge of grapefruit in the process.

This article originally appeared in Huck 9 – The Jack Johnson issue.

Linkedin
RELATED ARTICLES
OTHER ARTICLES
For decades, an area of East London has served as a community hub for Vietnamese people looking for a taste of home.
Whether it's partygate, the climate crisis or the spiralling cost of living, the fightback begins on the picket lines writes Tommy Vickerstaff
With inflation now at a 40-year-high of 9 per cent, demonstrations organised by TUC took place to demand action from the government.
Wealth inequality and the rising cost of socialising is placing a strain on people’s relationships, reports Eve Upton-Clark.
Finland-born photographer Sirkka-Liisa Konttinen looks back on her decades-long documentation of life in Northern England.
In the latest instalment of Photographers in Conversation, the chronicler of raves, protests and beyond explains why he’s drawn to such specifically visceral environments.