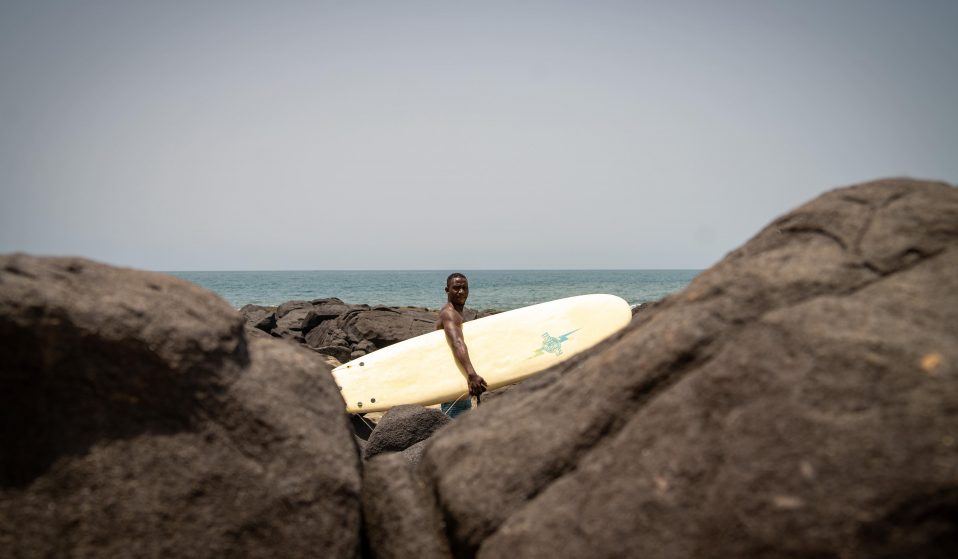 In 2012, a small coastal town became home to Sierra Leone’s first ever surf club, kickstarting a journey that has seen it transform into the nation’s wave-riding capital.

Bureh is located on the Sierra Leone peninsula, a crescent-shaped cove known for its golden stretch of sand. It’s here that the country’s first ever surf club was born, kickstarting a journey that has seen the town become the nation’s wave-riding capital – despite the challenges it continues to face.

It’s early in the morning at Bureh Beach, a stretch of sand situated on the far tip of Sierra Leone’s Western Area Peninsula. Something apocalyptic is brewing. Fearsome Atlantic waves batter the shoreline. The sky is overcast with the Harmattan, a northerly wind that blots out the sun with Saharan sand. A lone figure looms out at sea.

Again and again, the silhouette disappears beneath the towering waves, which crash down one after the other like soldiers marching out to battle. Each time he resurfaces, imperious and unmoved.

But on the horizon, one wave emerges larger than any other before it. It rapidly swells and foams, cresting several metres high and looking for all the world like it will crush him. At the last moment, however, he jumps up onto a surfboard and cuts across it, twisting and turning his way to shore.

“Dude, did you //see// that?” shouts John Small, strolling up along the sand in his black wetsuit. He takes a seat on a large rock, surfboard in hand, its leash still tied to his ankle. “I was so close to getting wiped out by that beast.” 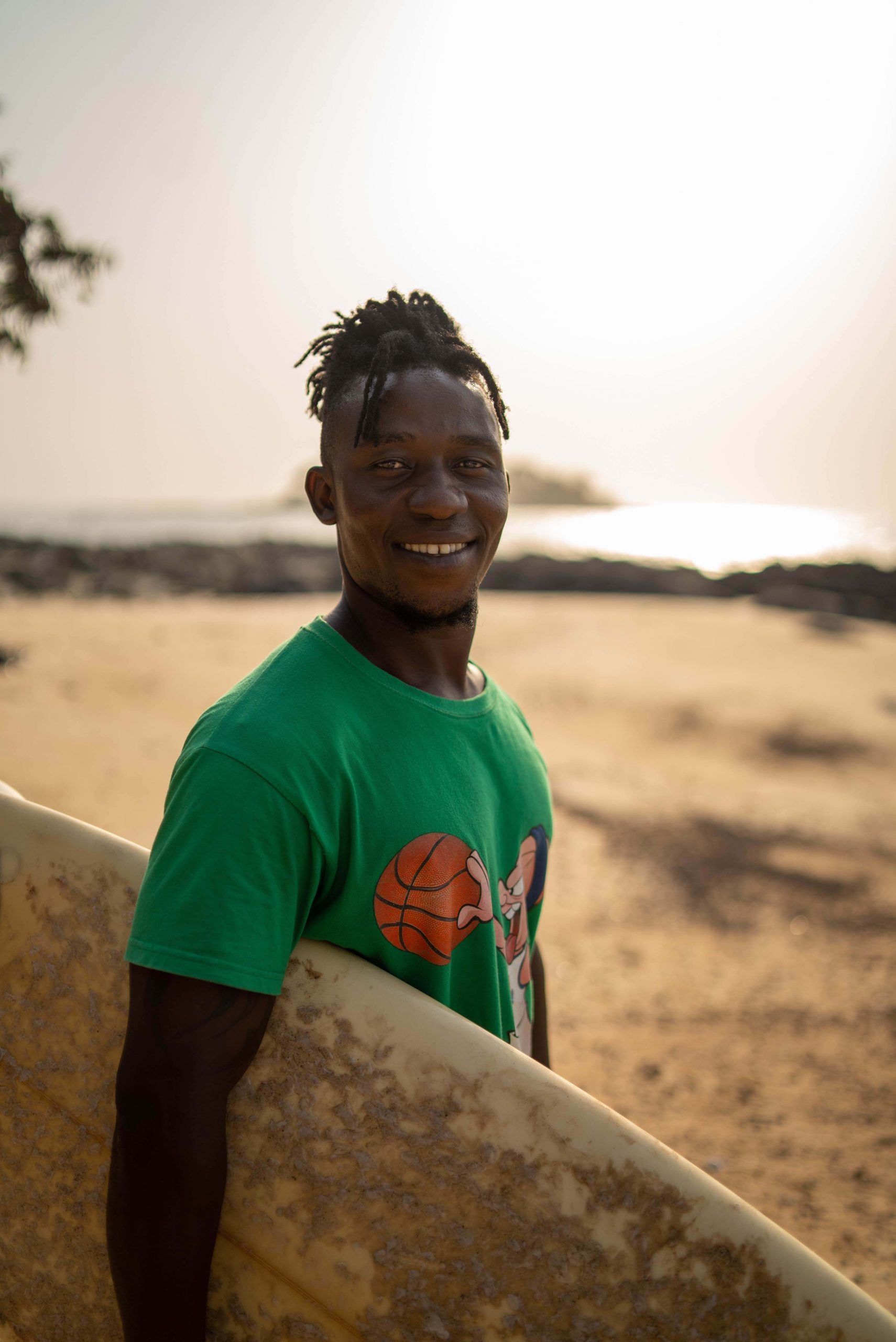 The 27-year-old Small, with his distinctive knotted dreadlocks, chunky goatee and disarming grin, is one of a growing number of surfers taking to the waves in Sierra Leone. Bureh, a picturesque coastal town with a crescent-shaped cove, has become the nation’s surf capital. For residents, this has had a transformative effect.

Small, who was born and raised in Bureh, first began surfing when he was just seven years old. He’s a self-described “beach baby”, who became mesmerised after witnessing foreign surfers on the beach for the first time. “I’d never seen it before,” he recalls. “I was like, ‘What is this? What magic is this?’”

Around that time, a Belgian family who had moved to Freetown – Sierra Leone’s capital – began visiting Bureh almost every weekend to surf. Small would borrow one of their boards for five minutes every now and again. “At the start, I was crashing down every time,” he says. “But one day, I finally caught my own wave.”

By the age of 10, Small was teaching others, including his older brother. At the same time, plenty of other beach babies like him were following suit. The scene in Bureh quickly began to snowball, despite the fact its surfers were working with limited equipment. 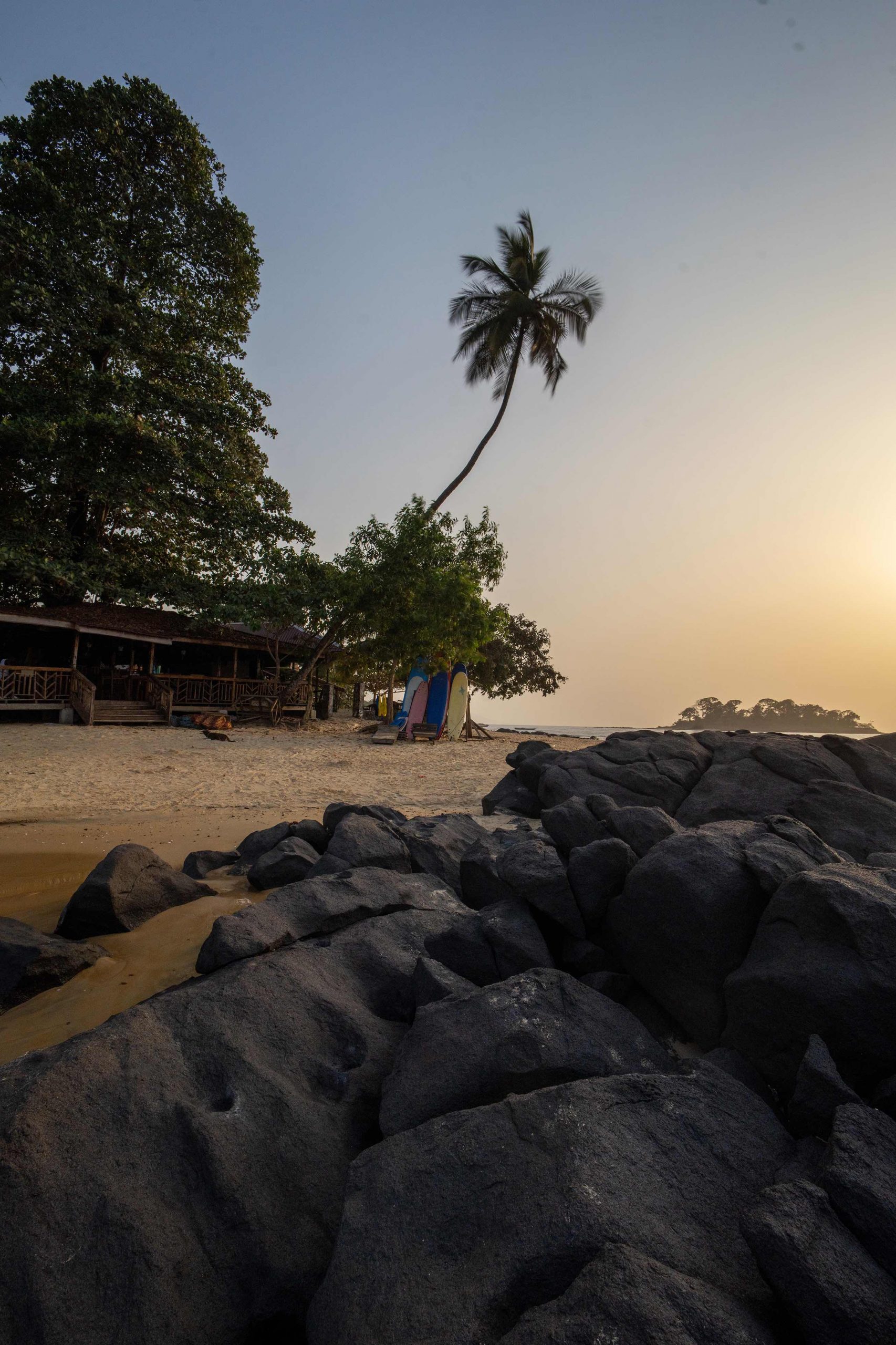 “I was doing body surfing with a broken canoe,” says Jahbez Benga, 32, who began surfing when he was eight. “I got it from a fisherman who said it was too old for him to use anymore. So we took a machete and shaped it like a bodyboard. But it was really difficult – it was maybe 20 or 30 pounds heavier, there wasn’t much speed. It’s what we call an ‘African surfboard.’”

The real seachange didn’t arrive until a few years later. A group of local surfers, along with an Irishman called Shane O’Connor, managed to convince the village’s elders that a surf club would help protect their coastline and bring positive economic benefits to the community. Eventually, land was set aside and a fundraising campaign ensued. Friends of O’Connor’s sent used surfboards, the German NGO World Hunger Health provided building materials, and the surf forecasting company Magic Seaweed sent over several soft-top beginner boards.

In 2012, now stocked with a decent selection of boards and housed in a newly-built wooden clubhouse, the Bureh Beach Surf Club officially opened its doors for business. It was the first ever in Sierra Leone. Run like a cooperative, the 30 or so members gave lessons, hired out boards and cooked up  beachside seafood meals to fund their own surfing – as well as letting young Bureh kids use the gear like a lending library. “We wanted to change our community through surfing,” says Small, who was one of the club’s founding members. “That day we opened, there was a huge party.” 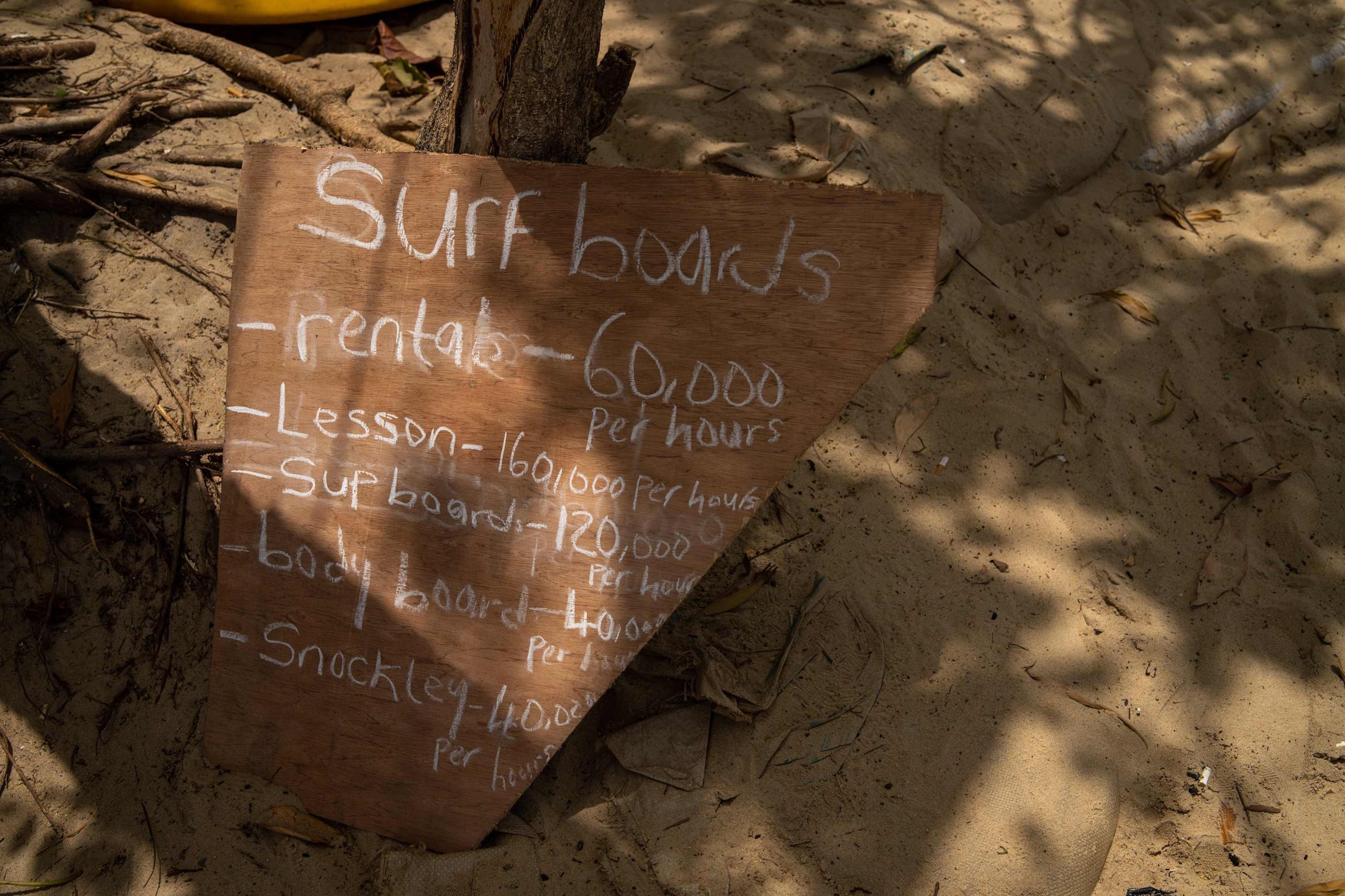 A decade on, restaurants, beach huts and guest houses have sprouted up along the coast thanks to the constant stream of visitors – and the trickle-down effect of that higher footfall benefits everyone. On top of that, the Italian charity Surf 4 Children has funded the construction of the village’s first health clinic, which they did after hearing about Bureh’s surf club.

At the same time, Bureh’s surfers have received growing recognition. Over the years, they have been invited to competitions in neighbouring Liberia and the Ivory Coast. In 2017, largely thanks to the work of the club, Sierra Leone was accepted into the International Surf Association (ISA), joining more established African surfing nations like Morocco and South Africa to become what was then the 98th member worldwide.

“Before surfing, Bureh wasn’t well known,” says Benga, who is also the president of the Sierra Leone Surfing Association. “Now it’s known internationally. People visit Bureh from all over the world. It’s all because of the surfing club.”

Fernando Aguerre, ISA President, echoes that sentiment, emphasising the wider benefits to the community. “It creates opportunities at a competitive level but also for lifestyle, employment, recreation, and therapy,” he says. 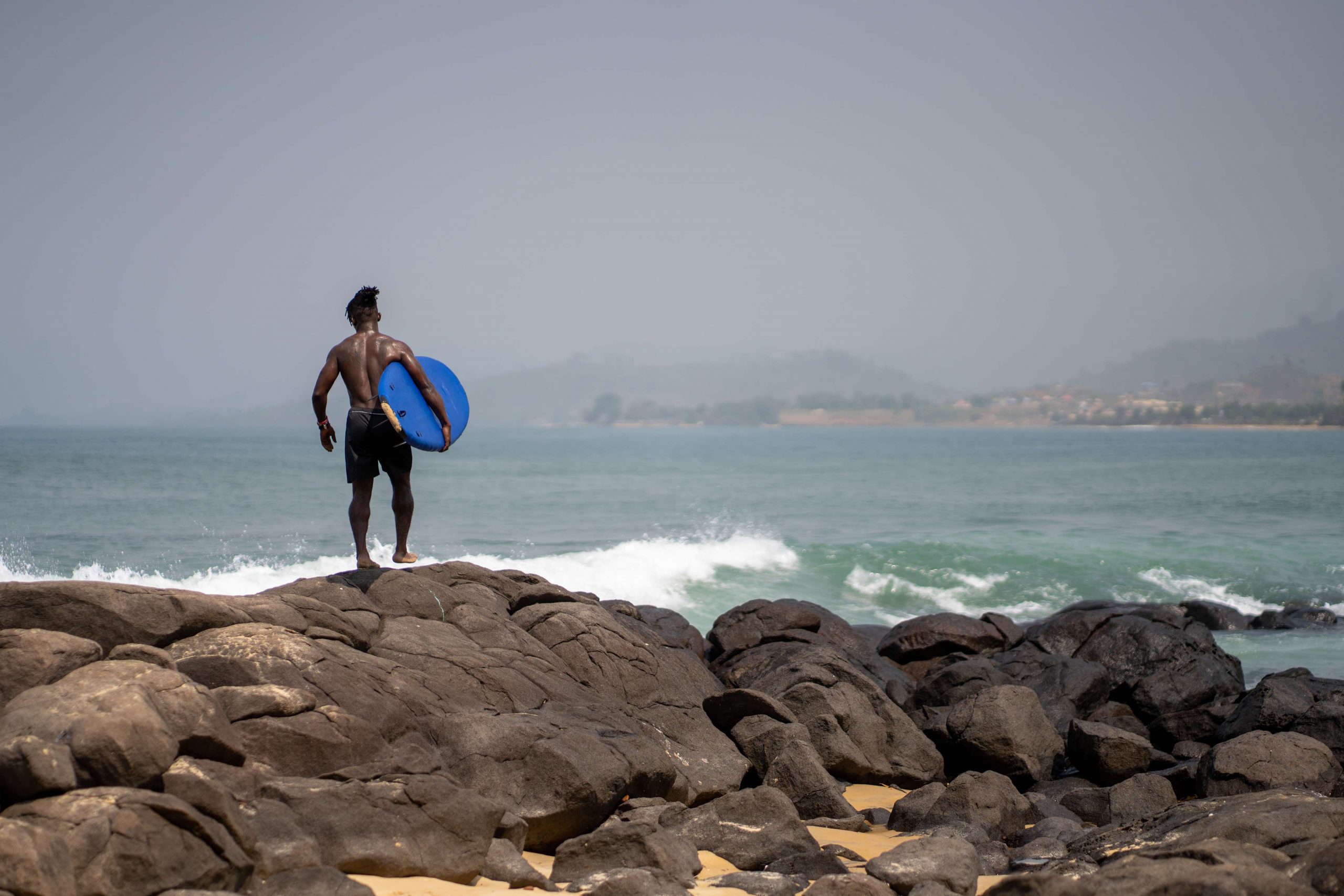 Bolstering those opportunities, the ISA runs a scholarship programme for surfers under the age of 18 who show dedication to both schooling and surfing. Scholars receive funds for education costs, surfing equipment, training, and competition participation.

To date, there have been more than 350 scholars worldwide – 11 from Sierra Leone – including one of John Small’s pupils, Samuel Johnson. The 18-year-old was a scholar in 2017 and has already been riding for seven years, usually borrowing a board from the club after school finishes. “John’s like a big brother,” says Johnson, who hopes to be a doctor in the future. “He taught me everything. I love the sport.”

But besides economics and education, for many, surfing is important in a far less tangible manner: it helps process trauma.

Ashleigh Heese, Training and Partnerships Manager at Waves for Change, a surf-therapy non-profit based in South Africa which works with several partners in Freetown, says that surfing has a special effect in this context. “Surfing helps people feel better,” she says. “But we need to open up access. Because of poverty it hasn’t been accessible to certain communities, despite their proximity to the beach.” 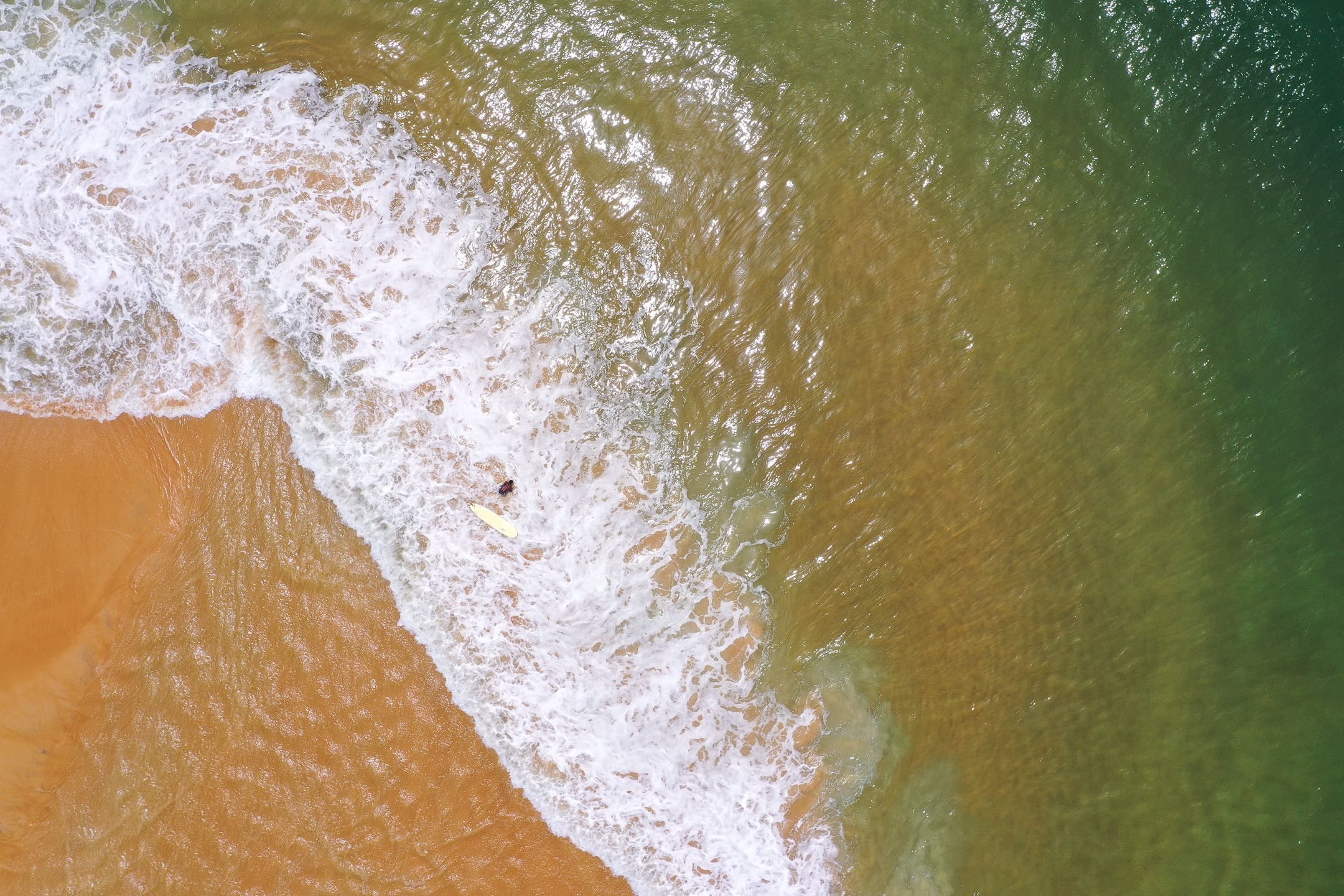 Surfing, a physical activity that cultivates a shared identity, has natural therapeutic qualities. In this respect, Heese believes its ability to distract is unrivalled. “Surfing is challenging because it requires a lot of focus… you’re not thinking about the things that could cause you stress.”

Sierra Leone has experienced more than its fair share of turmoil. Between 1991 and 2002, a civil war triggered by conflict over the infamous “Blood Diamonds” – as well as other natural resources – tore the country apart. Up to 200,000 people were killed; millions were displaced. Then, between 2014 and 2016, a deadly epidemic of Ebola hit the region, killing more than 11,000 across Guinea, Liberia and Sierra Leone. Even now, it is one of the poorest countries on earth – the average person earns just $1.70 a day.

As a result, perhaps unsurprisingly, many of the surfers in Bureh have their own tale of adversity. Mohammad Bangura, known by his friends as “Medo”, fled his home province of Moyamba due to the civil war. He was forced to relocate to Bureh with his family. “They destroyed our houses, killed a lot of people,” says the 26-year-old. “We can’t go back.”

But Medo, who was also taught by John Small, says surfing has transformed his personality and worldview. “Surfing changed my life,” he says. “Before I was too shy, always in the corner. It opened up my mentality and I made a lot of friends. It has brought the community together.” 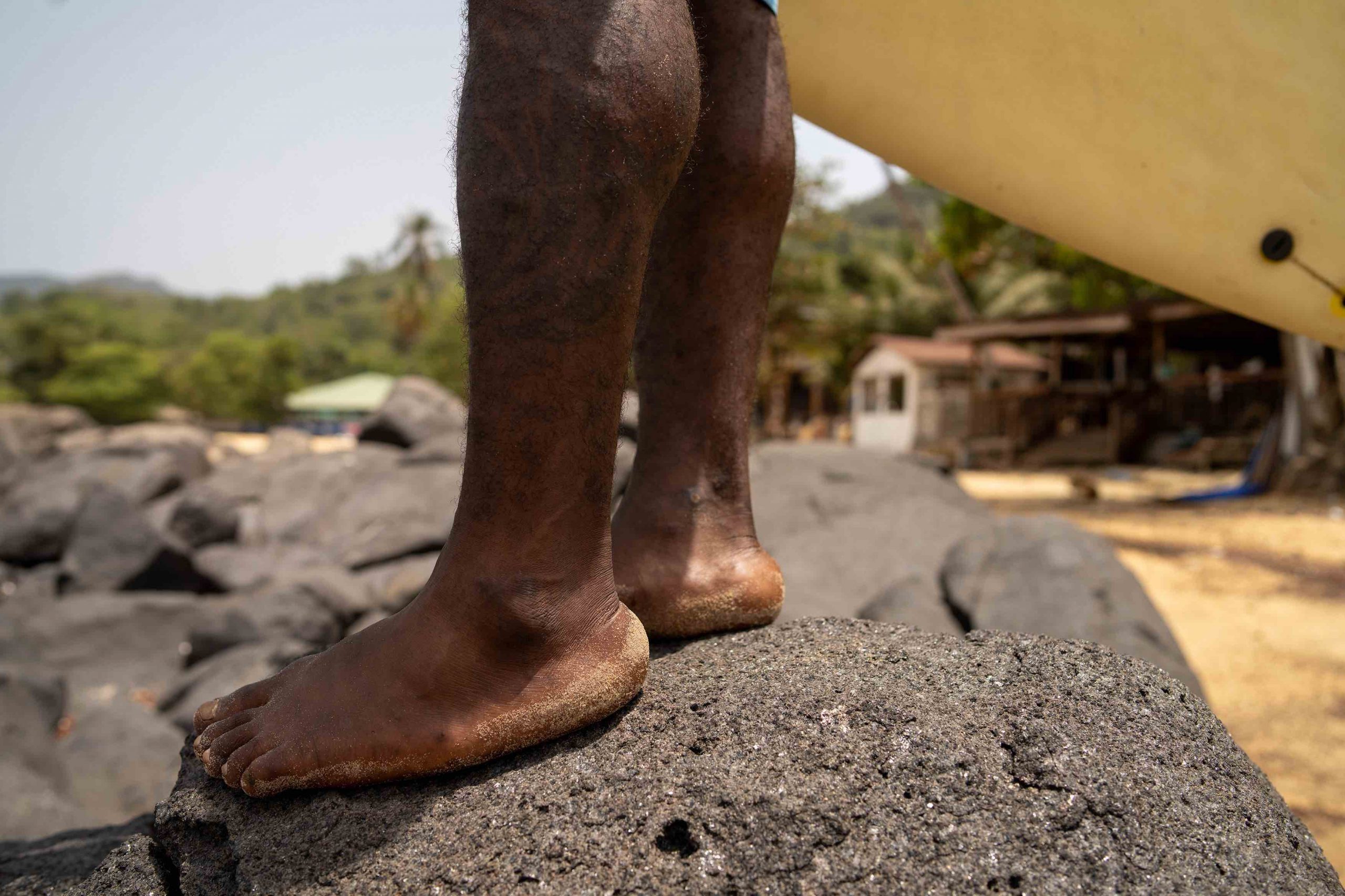 The same goes for Small, whose father – strongly opposed to his son surfing – died when he was just eight. “My dad was against it, he didn’t want me to do it,” he says. “One time he hid my surfboard for a week. He told me, ‘You need to go to school.’ But he would be a proud man if he was alive today. He would see what surfing has done for the community.”

Others describe their relationship with surfing in more direct terms. “If I have stress or I need closure, I just take my surfboard and go to the ocean,” says Benga, who left Bureh for New York City in 2016 after marrying an American woman. “The ocean is my church.”

But even now, several challenges remain. There’s the threat of coastal erosion, which is brought on by both climate change and sand mining – a lucrative yet illegal practice that is rampant in the area. Despite the rapid progress made by the new generation of surfers, Small says that limited resources have put a ceiling on what they can achieve for now. “The kids are so fast now, but they don’t have the facilities.”

However, with surfing recently making its debut in the Olympic Games, there’s hope that not only Sierra Leone, with its hundreds of miles of golden beaches, is put on the surfing map – but that surfing is put on the map for Sierra Leoneans. 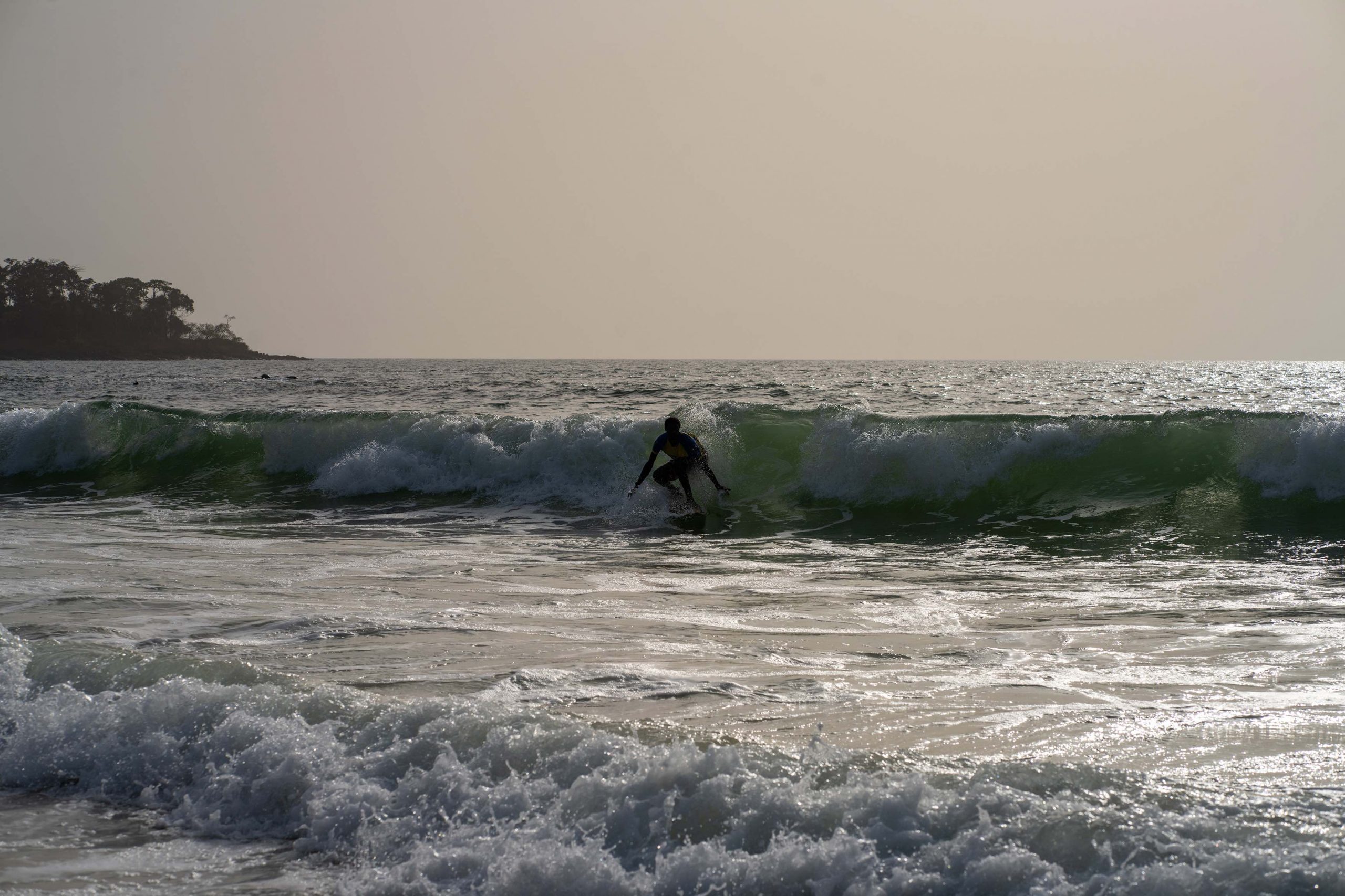 “The surfing scene is still new here, we are trying to establish it,” says Small. “Many people in Sierra Leone struggle to understand, ‘What do you //mean// riding the waves?’ But my dream is to have representatives from Bureh in the Olympics. Every kid you see on the beach here is a surfer. We have to create opportunities for them.”

While the surf cultures developing along Sierra Leone’s shorelines are, to an extent, relatively new, they are part of a centuries-old tradition. The first known account of surfing in Africa was written by a German merchant during the 1640s in what is modern day Ghana.

Back at Bureh, after the sun has blasted away the morning chill and the wind has lost its breath, beach life is back to its normal, vibrant beat. The coconut-draped palm trees move in the breeze and the scent of plantain wafts over from the surf club’s kitchen.

John Small gets up and paddles out into the ocean. It’s unusually still, with transparent tropical water gently lapping onto his board. “Whenever you’re out there it can take your mind off things,” he says. “You’re smiling when the waves are fresh and the sea is clear like now. My mind is like this: ‘More waves, more waves, more waves.’” 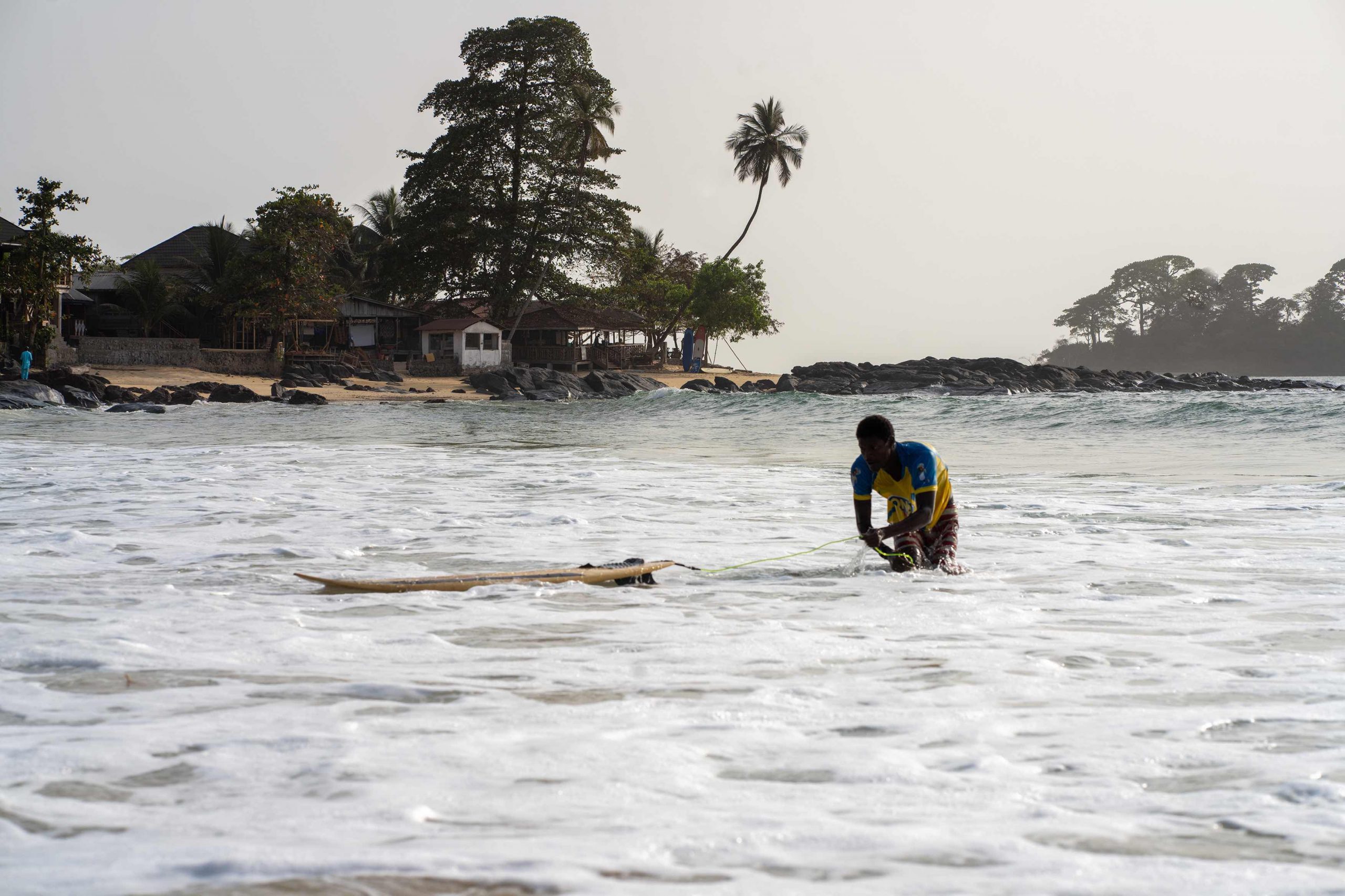 Linkedin
RELATED ARTICLES
OTHER ARTICLES
Photographer Ira Lapu documents the lives of ordinary Ukrainians living amid a brutal conflict.
The hate Just Stop Oil faced after throwing soup over a Van Gough painting has been immense. Here, they explain why it won’t deter them.
After voting to strike across England, prison teachers explain why they’ve been pushed to a breaking point.
SOAS Detainee Support detail the appalling conditions they witnessed at the dangerously overcrowded immigration centre in Kent.
Shaunak Sen discusses his documentary chronicling an ad hoc hospital’s efforts to protect the city’s birds of prey.
Following the release of their third album, the duo talk collaboration, family and connecting with the dead.