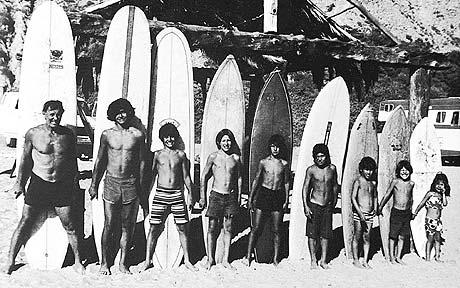 In our humdrum world of nine-to-five, it isn’t difficult to talk of escape. Only the brave don’t talk – they simply do.

In our humdrum world of nine-to-five, it isn’t difficult to talk of escape. Only the brave don’t talk – they simply do.

Dads can be predictable. They come in all shapes and sizes – strict, laidback, cool as hell – but are generally bound by one thing: education, and making sure you get one.

Dorian ‘Doc’ Paskowitz has a slightly different take: “There is a wisdom in the wave – high-born, beautiful – for those who would but paddle out.” With a philosophy that laced surfing as number one, the Texas-born doctor packed up his clan (wife, eight boys and one outnumbered girl) in the sixties, boarded a motor home and, echoing Kerouac, hit the road for a life spent chasing waves.

Education for the Paskowitz kids was a home-schooled curriculum of surfing and health. “It was the same way one of the Rothschilds might wanna share banking with his kids,” says the eighty-seven-year-old. “There is a core, central power point in my life that has just moved everything. And that has been surfing.”

Having tuned in and dropped out, the Stanford-trained doctor traded in fixed abodes and regular pay for a vagabond life, but ended up becoming a surfing pioneer of political proportions. The Paskowitz Surf Camp, founded in 1972, etched the family name into surfing’s history. But it’s the footprint Doc left in Israel that reverberates a little deeper.

“It turned out to be a fantastic media issue,” says Paskowitz of a trip he took last year with Surfers For Peace, which he co-founded with Kelly Slater, to hand-deliver surfboards to surfers in Gaza. “Over a billion people saw us give those boards. But it didn’t start off with a billion people in mind – it started off very simply. We saw a picture of two guys in Gaza, who were Arabs, sharing a surfboard and my friends and I – mostly Jews – said, ‘Oh hell, that’s no good. If they want to surf as much as we do, we just gotta go get them some boards.’ So we did. That was the end of it for us – that was the beginning of it and the end of it.”

So what does a nomadic, pro-peace, surfing physician see when he looks back over his life? “I have been a beach bum since I was twelve years old,” says Doc. “On top of that I became a lifeguard, a research physiologist and a medical doctor. But you know, it was all what you might call T-shirts on top of a bare-skin beach boy. It was a great life. I’m sure I’m gonna miss it.”

Linkedin
RELATED ARTICLES
OTHER ARTICLES
Huck spoke to four creative young Israelis and Palestinians for new perspectives on the ongoing conflict in the Middle East.
Dion Agius chases freedom for a living. But in the unpredictable world of free surfing, the contracted wanderer is seldom free.