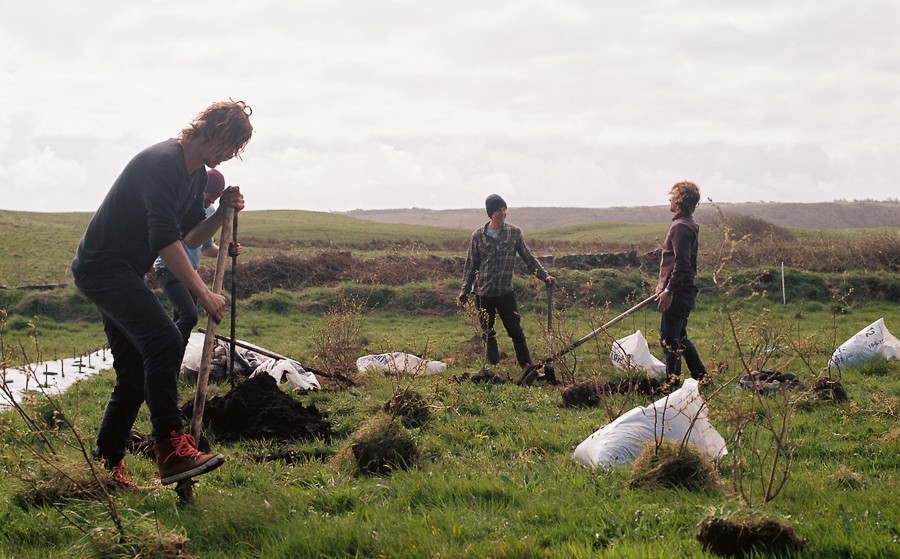 Irish surfer Fergal Smith has paddled into some of the world’s largest waves, but it’s the tiny seeds he’s growing at home that he hopes will be his legacy.

Irish surfer Fergal Smith has paddled into some of the world’s largest waves, but it’s the tiny seeds he’s growing at home that he hopes will be his legacy.

It’s difficult to imagine Fergal Smith living the pro surfing dream, lapping the globe with an energy drink in hand. When we meet on a frosty morning, he’s taking soft little footsteps through the dew at dawn, up and down neat rows of vegetables. He’s wearing a torn hoody and a dirty-looking beanie, mud under his fingernails and calloused hands. Winter is spring’s potential and all around his feet are the waiting fruits of shared endeavours. The Moy Hill Community Garden, outside Lahinch in County Clare, West Ireland, is the work of many hands, but Fergal is the galvanising force and the glue that binds it all together.

The garden looks across the bay to Liscannor, where the land rises sharply. Up north lies ‘The Wave’, the main event for surfers along this coastline of brutal slabs. Fergal is one of the leading lights of a vanguard crew who charge the massive barrels under the cliffs, documented by unparalleled lensman Mickey Smith. Wherever you are in the world, however hardcore your environment, Clare is a serious dreamland for a certain type of surfer. Whether or not anyone is watching, Ferg and crew will be out there, stretching the limits.

The atmosphere at their home-break is a far cry from the pro circuit. “I’d go to Tahiti for eight days, Australia for five days,” says Fergal, “and I’d meet the same people, doing the same thing. They’d chase the same swell three times.” At the ripe age of twenty-six, sponsored to the hilt and revered for his surgical barrel riding in massive waves, Fergal decided he’d had enough. The environmental impact of that lifestyle just didn’t sit comfortably with his ambitions.

I meet him planting leeks in the rain at ‘The Hill’. The quiver shed outside is something else: Campbell Brothers Bonzers, locally made single-fins, and big-wave guns in the roof, ready for whatever the Atlantic will disgorge. In the last few years Ferg has transitioned to paddling in whenever possible, eschewing petrol-fuelled jet-skis. It’s a back-to-basics attitude that informs everything he does. “This space is way more than just producing food. It’s stuff that isn’t in school, isn’t on TV, isn’t really being taught by parents anymore.”

If you ask Ferg about some of the heavy shit that’s gone down over the years, he’ll still extract the positives. Take, for instance, big-wave charger and Cushe ambassador Mitch Corbett, who broke his back surfing under the cliffs. “There are not many people who get it. Mitch just gets it. He didn’t know anything about growing but seeing his journey, with a broken back, providing him with the veg that made him buzz, it buzzed me ten times more, it made it all so much more worth it. It’s about someone who’s injured, being healed.”

Setting up the garden hasn’t been easy, but you get the sense that challenges are what Ferg thrives on. “I heard about this field six feet deep in brambles,” he says. “The guy who owns it said, ‘I’ll get you a digger to clear up.’ But I thought about it – this is Ireland and he’ll never actually do it. One day I woke up in the morning and said, ‘I’m going to have a cook-up in the field.’ No one gave me a hand apart from [Ferg’s friend] Sal, and it took us two hours to find the gate it was so overgrown. She was overwhelmed: ‘You’ve invited about fifty people to have dinner tonight, and we can’t even get into the field. You’re mental.’ But in four or five hours we made a twenty-yard circle, dug a hole and then had to run up here, pick a load of veg, run it all back down and make a fire. We fed people in a field they’d never seen before.”

Growing vegetables is part of Ferg’s heritage. He grew up on an organic vegetable farm outside Westport in County Mayo; his dad is a farmer. The effects of that first cook-up were instant and powerful.

“It’s mad,” he remembers. “I had people texting me saying that it was the best night of their year. We just put free vegetables into a pot and sat around a fire. It just showed so clearly that that’s what people connect with. That’s the inspiration we started with. The plan now is to grow loads more veg and have a weekly cook-up.”

That field is now the Moy Hill Community Garden, an education space for people to come together and learn by doing. Supported by friends like Mitch Corbett and Matt Smith, Fergal has drawn in a host of volunteers inspired by the positivity and resilience of the community.

“People feel like they don’t belong in gardens,” Ferg says. “They don’t have green fingers, or they’re not strong enough. This space is about way more than just producing food. It’s a space they can come or go, there’s no sign up.”

So, what of the future of the garden? In little over a year, the crew have created a community. But Ferg has ambitions. “The big dream is a farm,” he says. “I have this vision of a café, eco-building courses, hostel, woofing system, surfers can come for free and do some work, learn something and take it somewhere else. We’re starting small scale, learning with the community, letting the community see who we are – that we’re just trying to feed people, teach people.”

In seeking an alternative to the pro surfing dream, the Clare crew are proving that surfers can be change-makers. As social innovators embedded in their community, they’re working to reconnect vast swathes of society. And every winter, when those onion-shaped low-pressure systems spit huge swells at the Irish coast, Fergal and crew, healthier and more stoked than ever, will be right there to meet them.

“If I’m eighty-odd, and that big dream starts to come together – that’d be perfect.” says Ferg, pausing to look out over the valley. “I don’t need to be there to see it.”

This article originally appeared in Huck 49 – The Survival Issue.

Grab a copy now to read the issue in full. Subscribe to make sure you don’t miss another issue. Linkedin
OTHER ARTICLES
A nostalgic exploration of the relationship between (wo)man and sea.
A journey through Britain's most remote, and world-class, waves.
A new generation of creative freesurfers are emerging from the Basque Country and they're determined to do things their own way.