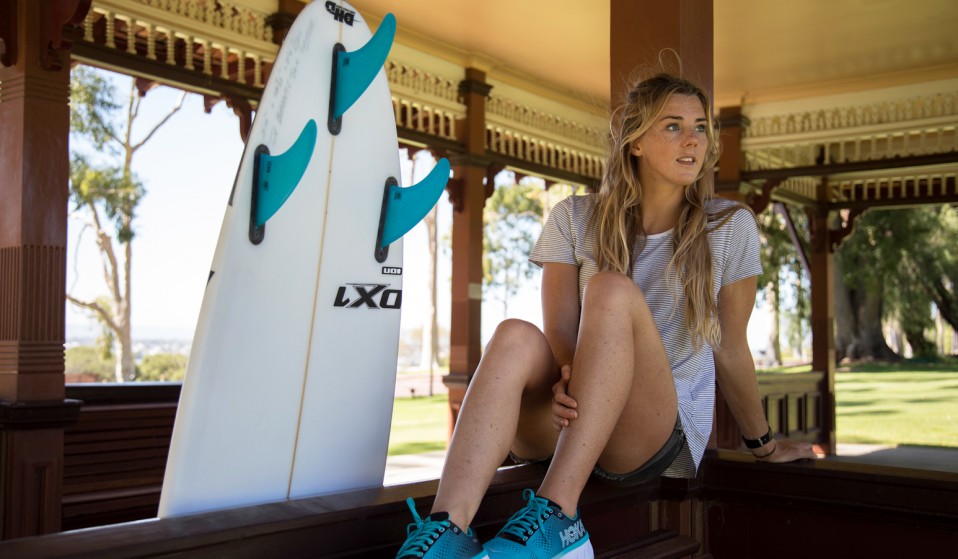 With an eye on the 2020 Olympics, surfer Lucy Campbell is hoping her athletic instincts will pay off on a quest for gold. Lucy's story is the latest in our Huck x Hoka One One series, looking at mavericks who found a new perspective through running.

When most people go surfing, they don’t have a plan. They’re out there to ride whatever waves come their way; they’re happy go with the flow. Lucy Campbell, however, has a different approach. When she goes surfing, she likes to set challenges for herself.

The 22-year-old pro surfer from Devon, who hopes to qualify for the Olympics in 2020, often tells herself: “I’m not getting out of the water until I’ve done three turns on a wave, or until I’ve done a proper carve where I’ve remembered to put my hand here, or looked back at the whitewater, or whatever.” 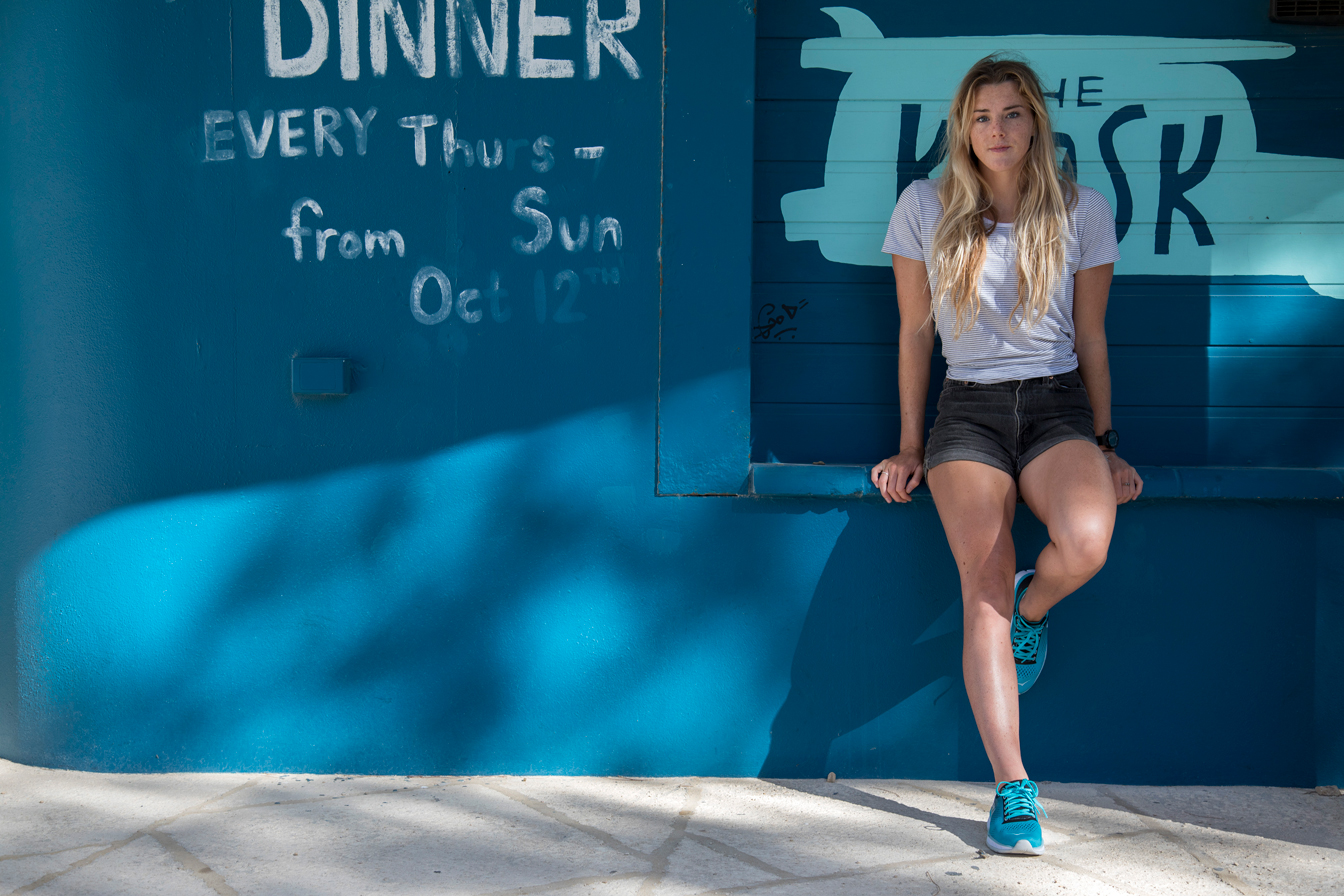 Such a habit is a legacy from Lucy’s days as a competitive runner. She was one of the best young middle distance athletes in the UK until foot injuries forced her to quit. She still runs for fun, but one of the things she misses most about her athletics training was how easy it was to measure progression.

“I miss racing against the clock,” she says. “That feeling of improvement, of pushing yourself, and knowing next time you’re going to be better. With surfing it’s tricky to know if you’re improving.”

Her biggest frustrations with the sport are the vagaries of quantifying good surfing – the way one judge might score a wave as a 10, while another might say it’s an eight – as well as relying on the ever-shifting sea conditions. “There are so many different variables in surfing that are so far from your control,” she says, “With athletics, it was just me, my trainers and the track. Just go for it. I liked that.”

Lucy has been running for as long as she can remember. As a child, she used to race her older brothers along the beach after school. “I was always really competitive with them,” she says. “They were quite a bit older, but I still tried as hard as I could to keep up with them. I don’t think I ever really thought about the fact they were boys, I just thought I should be as fast as them.” 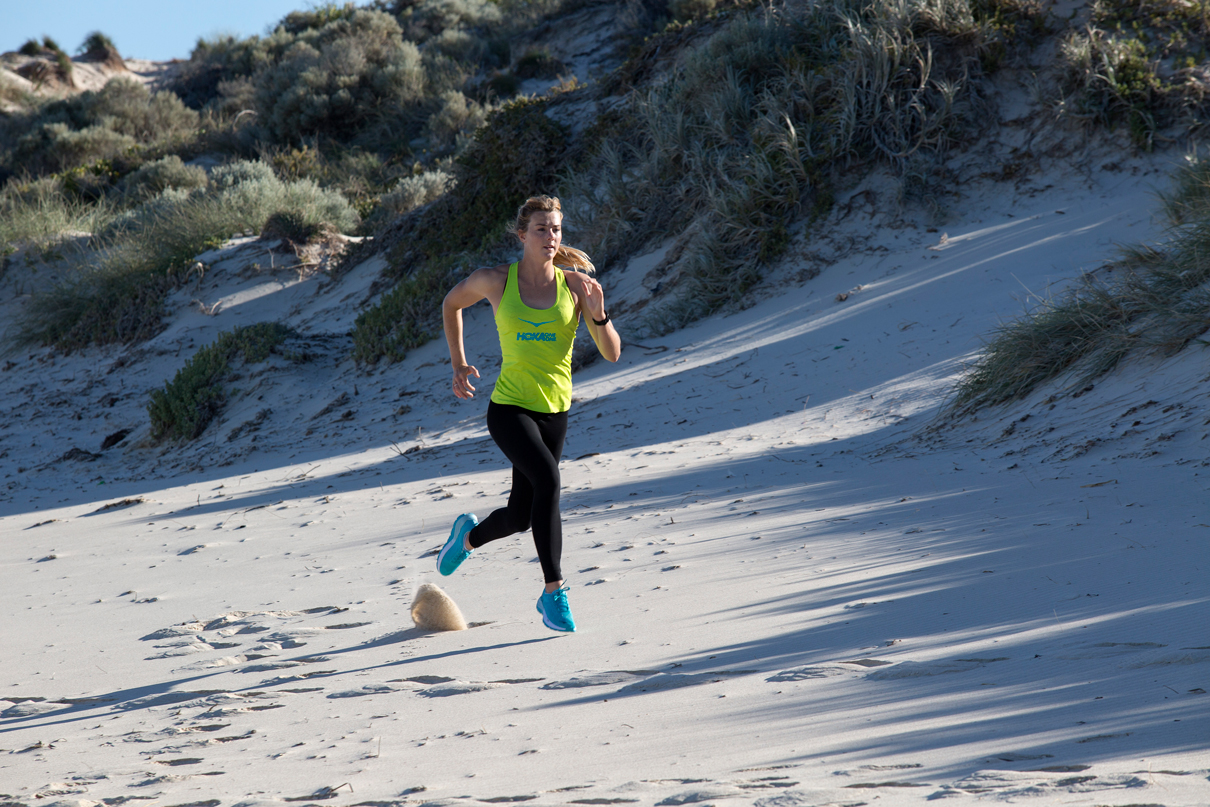 It’s a mentality she’s also brought to her surfing. She joined the local lifesaving club at a young age and when she was around 10, her dad took her out surfing. “I had a swimming hat and goggles on,” she says with a laugh. “He pushed me into waves and I loved it from the start.” But she’s never thought of herself as a female surfer — she just happens to be a woman who surfs.

“Growing up, there weren’t many girls who surfed on the same beach as me. So naturally, I surfed with a lot of boys; my brothers, or the locals boys that surfed. I think that helped push me as well. I just saw them doing things and thought, ‘I want to do that.’ It never occurred to me that I couldn’t.” 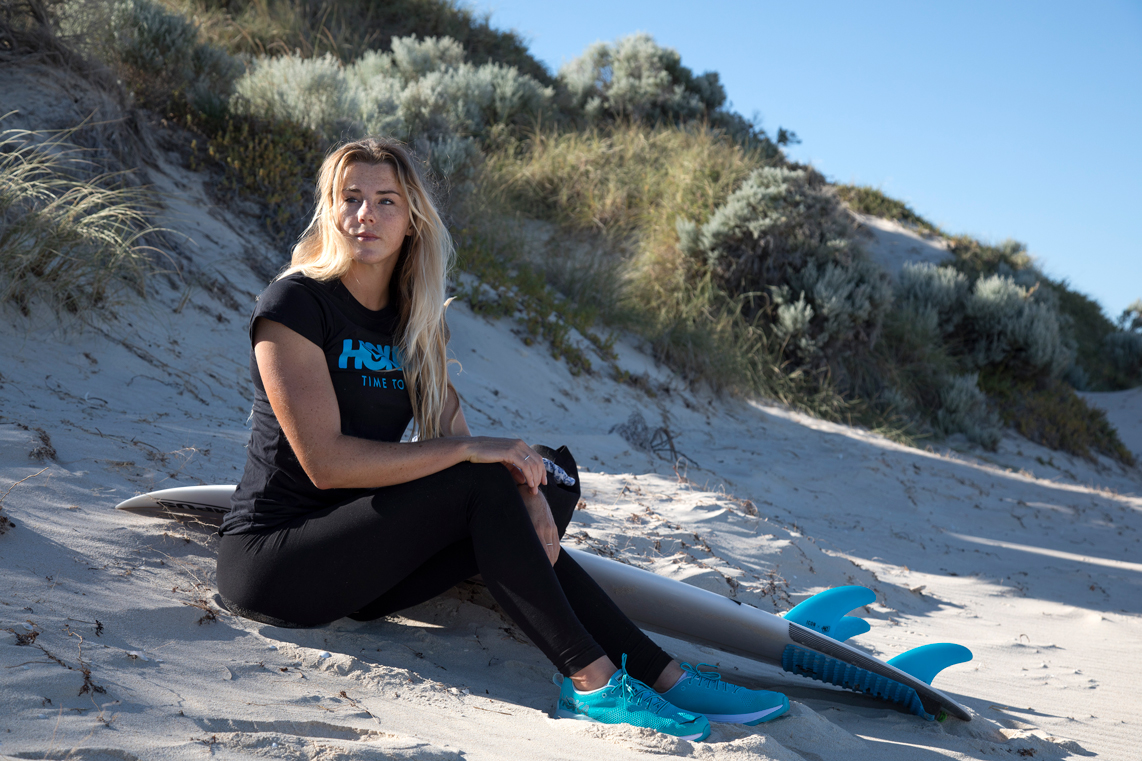 Lucy’s self-belief has been key to both her running and surfing success. She once raced in the English Schools’ Athletics Championships with a searing pain in her foot – one so strong that she almost passed out. But she kept running to the end, telling herself it was only a few minutes to get through. After the race, she found out she’d been racing with a broken foot.

“Thank goodness there was something really wrong and it wasn’t just me!” she says now, adding: “But even if they’d said I couldn’t race, I probably would have done anyway.”

Being headstrong has helped with her surfing many times too. Like the time in Bryon Bay when she got stuck in a narrow channel while a big set rolled in. As the waves smashed her into some rocks, she had to stay calm and keep paddling. Eventually, she made her way to safety. 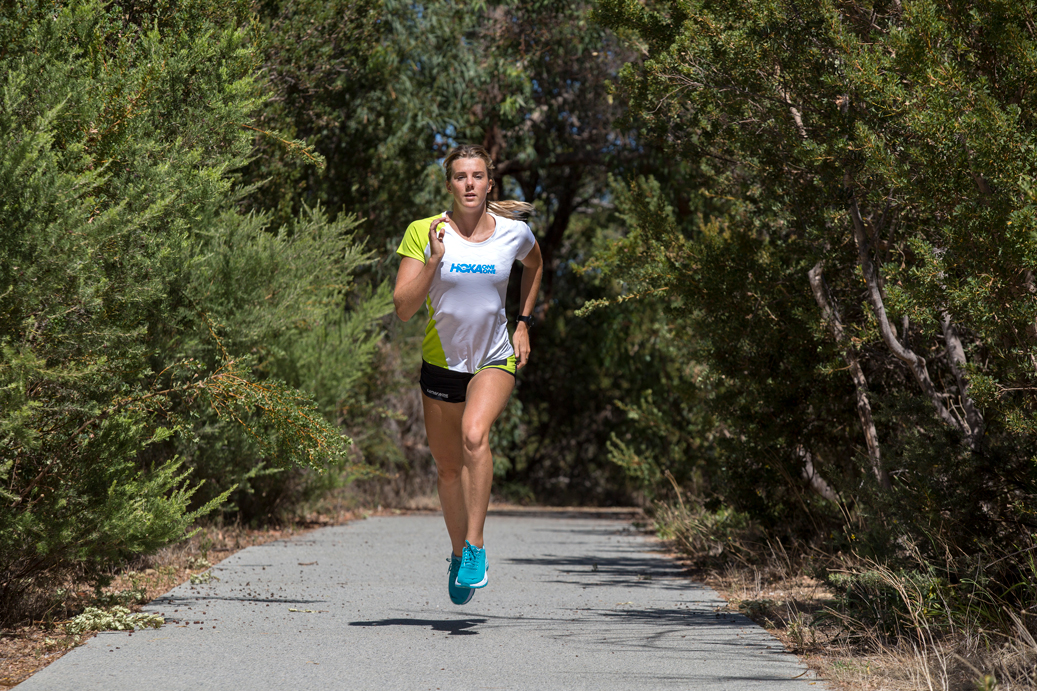 That dogged determination is an essential trait when you’re trying to be a professional surfer and you hail from Devon, rather than Hawaii, California or Australia. Instead of perfecting your moves in consistent warm-water waves under sunny skies, you’re faced with a frigid-cold wind-blown mess and trying to manoeuvre in a thick wetsuit and hood rather than a bikini or board shorts.

“It’s definitely a lot harder here as we haven’t got the same wave quality as a lot of other countries,” she says. “If the waves are good, I’ll be in for five or six hours a day. But even if they’re not good, I’ll still get in and give it a go.” 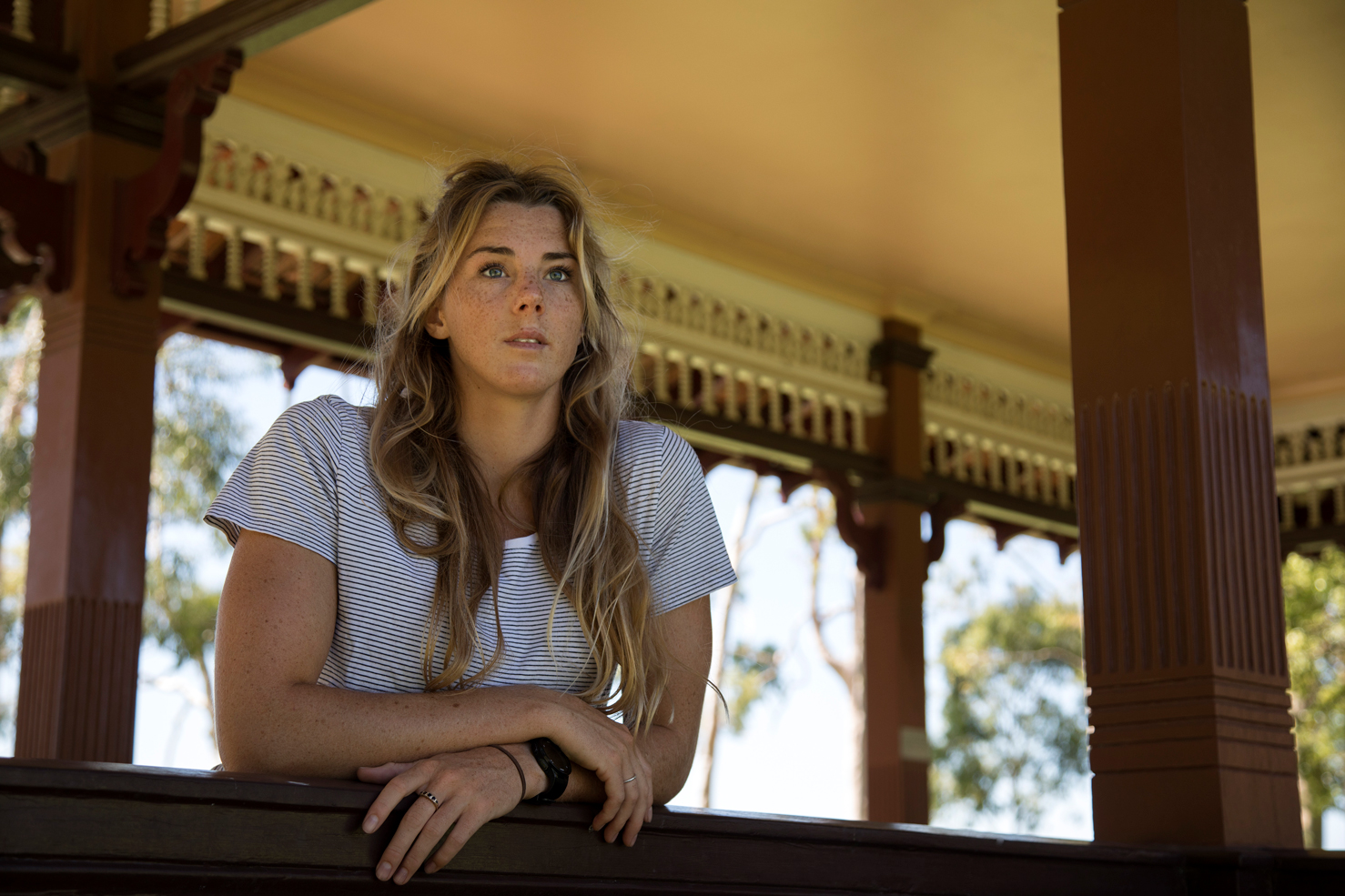 Read more Huck x HOKA ONE ONE stories here. If you run, or are thinking about making running part of your life, you can learn more about the innovative Cavu and Mach trainers Lucy wears at hokaoneone.com

Linkedin
RELATED ARTICLES
OTHER ARTICLES
In the latest instalment of Photographers in Conversation, the chronicler of raves, protests and beyond explains why he’s drawn to such specifically visceral environments.
Whether it's partygate, the climate crisis or the spiralling cost of living, the fightback begins on the picket lines writes Tommy Vickerstaff
LGBTQ+ students are keeping the spirit of the original Pride alive by fighting for liberation for everyone, not just their community.
A new report has found that the majority of Britains approach trans issues with compassion. It’s about time this was reflected by our media landscape.
Photographer Matthew Brookes recalls following a group of young people in Venice Beach living in search of the perfect wave.
The past five years have seen a staggering increase in foodbank usage across the UK. Now, staff fear things are set to get much worse.