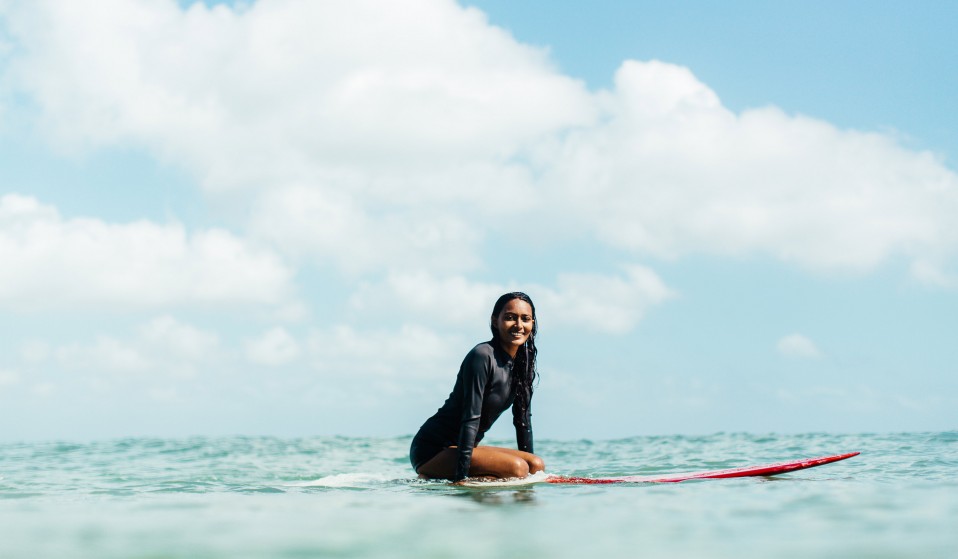 Pioneering Indian surfer Ishita Malaviya is one in a billion. And now her childhood constraints are a thing of the past.

Pioneering Indian surfer Ishita Malaviya is one in a billion. And now her childhood constraints are a thing of the past.

When you’re born into a country of 1.25 billion people, it’s hard to imagine being the first person to do anything. So it’s understandable that Ishita Malaviya didn’t believe what she was told, seven years ago. Raised far from a clean ocean, in the heart of congested Mumbai, her childhood was spent studying and doing little else. Travelling south to University, her life twisted upside down in the first year, with the arrival of a German exchange student.

“What are you doing with a surfboard in India?” she remembers her boyfriend, Tushar Pathiya, giggling when they saw the student carrying this foreign object. Along with most people she knew, the idea of surfing in India, was absurd to her. “I always thought you had to go abroad to do it,” she says soberly. Eager to be proven wrong, she and Tushar followed the student to a local temple beside the ocean. In awe, they saw two American yogis out in the water, teaching devotees how to surf. Returning days later to join in, the instructors spoke to Ishita on the beach. In a country of 1.25 billion people, she became India’s first female surfer.

“I wasn’t doing it to be a role model, I wasn’t thinking about breaking barriers,” says Ishita, reflecting on the years passed since then. “I just enjoyed it.” Now a sponsored athlete and running her own surf school with Tushar, she’s frequently in the international spotlight for challenging the traditional path expected of Indian women – consisting of education, marriage, pregnancy – and choosing the road less travelled. She stands out, literally, with a deeply tanned complexion in a country where “everyone glorifies fair skin”. Refusing to be offended by the criticism levelled at her, she laughs at it. “Surfing saved me,” she says. “It changed our lives completely.” 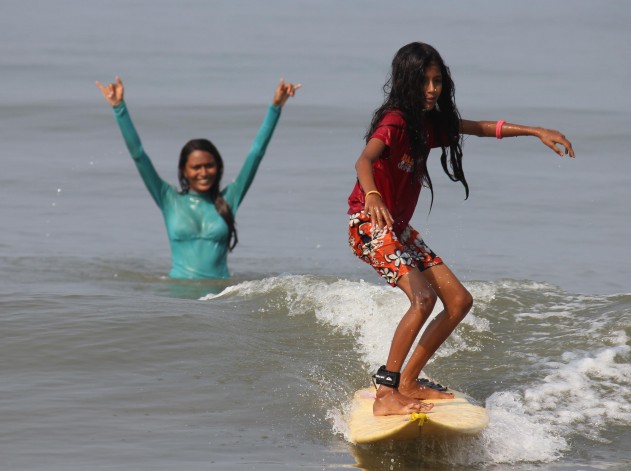 After their first taste, she and Tushar got hooked. Pawning everything they could find, they pooled their money together to buy a board. Before classes they would head to the beach with their friends, taking turns; one surfing, the rest clapping. And with no grand plan in mind, they began teaching others what they were learning, slowly becoming informal surf instructors. Expanding after two years, they bought a second board. “By the time we graduated, we couldn’t imagine moving back to the city and doing a nine-to-five job,” says Ishita. Despite finishing with competitive degrees in Journalism and Architecture, she and Tushar decided to officially establish a surf school, a decision both of their parents could not understand. “What is this? You’re becoming beach bums?!” Ishita’s mother would holler whenever they broached the topic. Convinced it was like bungee jumping, an activity you try once, there was little support from either family. Despite the disapproval, they went right ahead anyway, starting the Shaka Surf Club in Udupi, Karnataka – (about 300km south of Goa) in 2007.

Although the country’s 7,000km of coastline is littered with waves, most people in India do not believe you can surf there. “Everyone just laughed it off,” she says, describing their struggle when they first founded the business. Almost exclusively attracting foreign travellers, most locals were skeptical. A countrywide estimate of surfers sits below 500, a surprisingly low number that has roots in India’s beach culture, which – as we know it in the West – ostensibly doesn’t exist.

As Ishita explains it, in India you either picnic on the beach or go to Goa, get drunk, and throw beer bottles into the sea; even the concept of swimming in the ocean is foreign. “Most of the fishermen who go out for days on end, they themselves don’t know how to swim.” In the village beside their school, adults are terrified of the water, a fear passed down from one generation to the next. Dedicating space to the locals, they’ve gained many of the fishermen’s trust and have taught their children how to swim. “It’s like a community centre for them,” she says. Growing older, these kids are beginning to teach others inside the village, and slowly the cycle is changing. 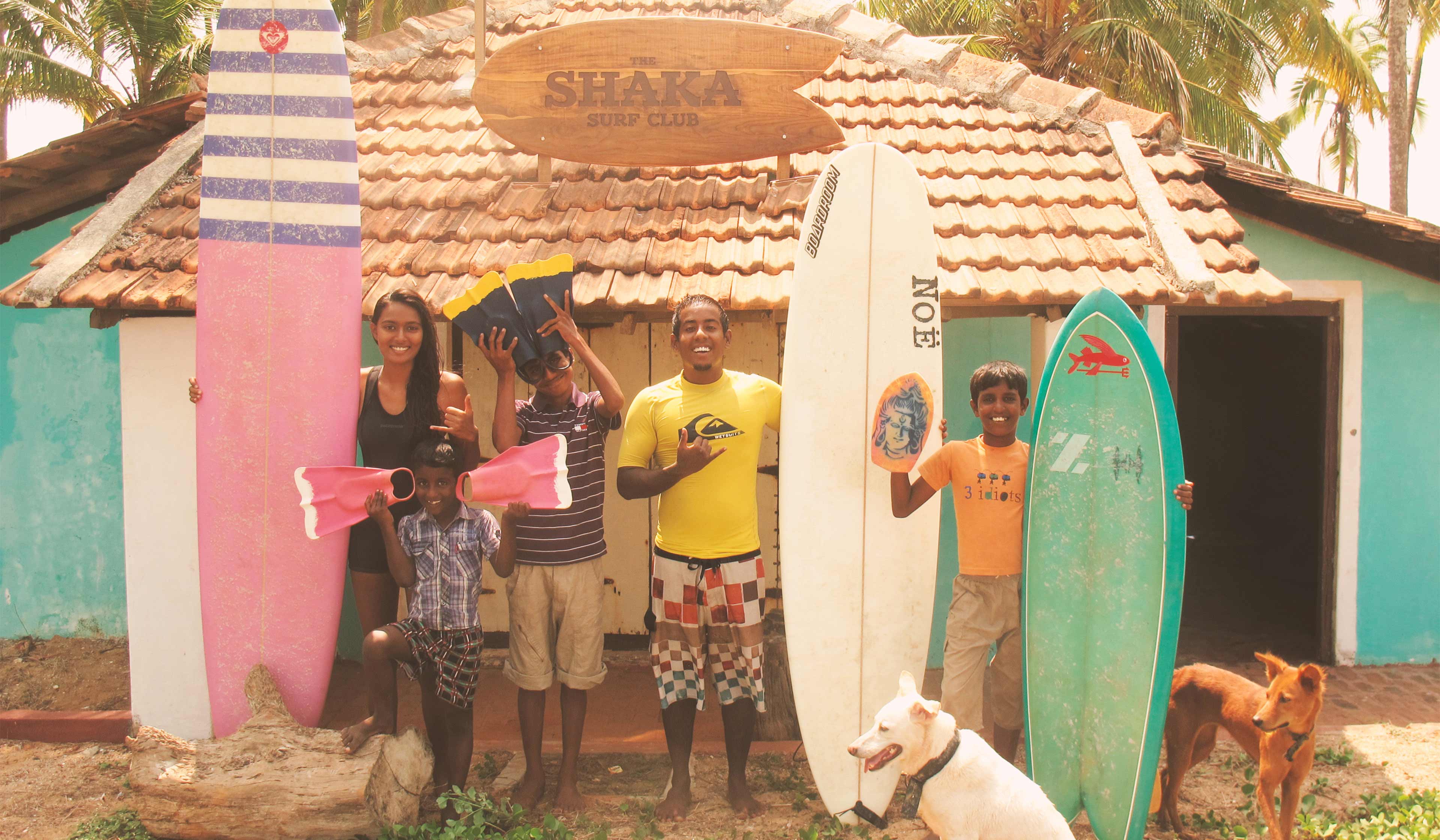 “Now I’m happy to say we get a lot of people from across India, from all the major cities,” says Ishita, who is slowly witnessing the sport emerge. With Indian society still based on a caste system – a rigid hierarchy you are born into – this rural migration is having an impact on how fishermen view themselves. Considered a low caste, their children often believe they are unlucky to be raised in a tropical paradise. “Before they started surfing, they used to look up to the big city life. They don’t really know the reality,” says Ishita, who’s now  seeing people leave the cities to live besides them. ‟When they realise what they have, they are just much more empowered to make decisions.”

With no background and little help, Ishita has appeared from nowhere to stamp her country on the surfing map. Nurturing the next generation of girls and boys, she is India’s figurehead for the sport. In her simple pursuit of the good life, she’s making change.

Linkedin
RELATED ARTICLES
OTHER ARTICLES
Following the announcement of an 80% hike in the energy price cap from 1st October, crowds gathered outside the offices of energy regulator Ofgem to protest and declare their intention to undertake a payment strike.
Yesterday thousands gathered outside Buckingham Palace after news of the Queen’s death broke.
Rhiannon Adam spent three months capturing an ageing society wracked by division, isolation, and the aftermath of scandal.
As the Scottish government announces a rent freeze, an activist with Living Rent who fought and won shares how they did it, and what must come next.
The idea that a younger generation is abandoning work has become a popular narrative online, but it doesn’t necessarily reflect reality.
In his 2008 series, the photographer pictured himself as Angela Davis, Martin Luther King Jr., Malcolm X, and other prominent figures.