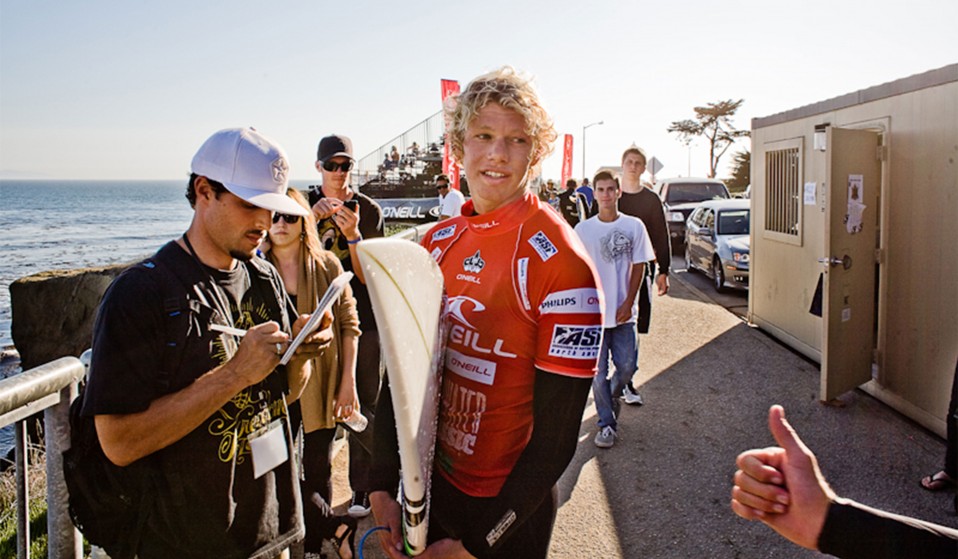 John John Florence has shed his über grom status and won the 2014 Quiksilver Pro France. And the ramifications for surfing, says Michael Fordham, run deeper than you think.

John John Florence has shed his über grom status and won the 2014 Quiksilver Pro France. And the ramifications for surfing, says Michael Fordham, run deeper than you think.

I remember John John Florence like YOU remember John John Florence. He was that blessed tow-haired über grom whose very existence proved that the myth of the über grom was not actually a myth at all. This kid was descended from a princely Hawaiian line – blessed with surf superstars as family and friends and whose backyard was the short strip of the North Shore of Oahu that has defined performance surfing since the very beginning

You saw him and his brother knocking bales of shit out of each other with big fluffy boxing gloves in those Vans ads, and then you saw an eight-year-old John John – all teeth and smiles and hair – dropping into a dredging right at Backdoor pipe, his homebreak.

But the thing is – though he has been hailed for over a decade as the inheritor of the mana of every great Hawaiian surfer since Duke Kahanamoku – in terms of World Championship Tour competition it has just never really happened for him. Until this week, that is, when in 10 foot survival-at-sea Hossegor he scored his first WCT victory at the Quiksilver Pro France, on Sunday October 5, 2014.

You know who we are. We’re the ones who spend an unholy amount of time checking the charts online trying to calculate drive-times crossed with swell conditions multiplied by wind direction. We get to put ourselves in the way of a swell for a brief, fleeting moment every couple of weeks if we’re lucky. It might not SEEM to matter to us but somehow, somewhere it certainly DOES mean something to have John John finally winning a World Championship Tour competition.

It matters that John John is winning because Hawaiians are supposed to be the best surfers in the world.

Whether or not the criteria of professional surfing competitions is actually a true and honest reflection of how ‘good’ a surfer might be – there hasn’t been a Hawaiian WCT world surf champ since the hat trick of titles racked up by late Kauai native son Andy Irons, which ended in 2004. And in fact, there have only been five Hawaiian world champs since 1964 (the others were Derek Ho in 1993 and Sunny Garcia in 2000).

The fact is that Hawaii gave surfing to the world. It’s only right that they take up the mantle of the World Championship.

Does this mean that the best surfers in the world don’t become World Champions? Perhaps. But no matter. John John might never actually win a World Title. But at least we can now remember him as a contender. It was just meant to be.

Linkedin
RELATED ARTICLES
OTHER ARTICLES
We catch up with the singer in her London studio to connect the dots between music, painting and her relationship with the city.
A new photo series documents tribes preserving the environment through simple, sustainable practices in central Asia.
Whether it was seacoalers in Northumberland or the miners’ strike, the photographer was always fully immersed in the story he sought to capture.
Jamel Shabazz’s photos honour those who were lost and those who survived one of the most brutal eras in recent history.
SOAS Detainee Support detail the appalling conditions they witnessed at the dangerously overcrowded immigration centre in Kent.
Following the release of their third album, the duo talk collaboration, family and connecting with the dead.