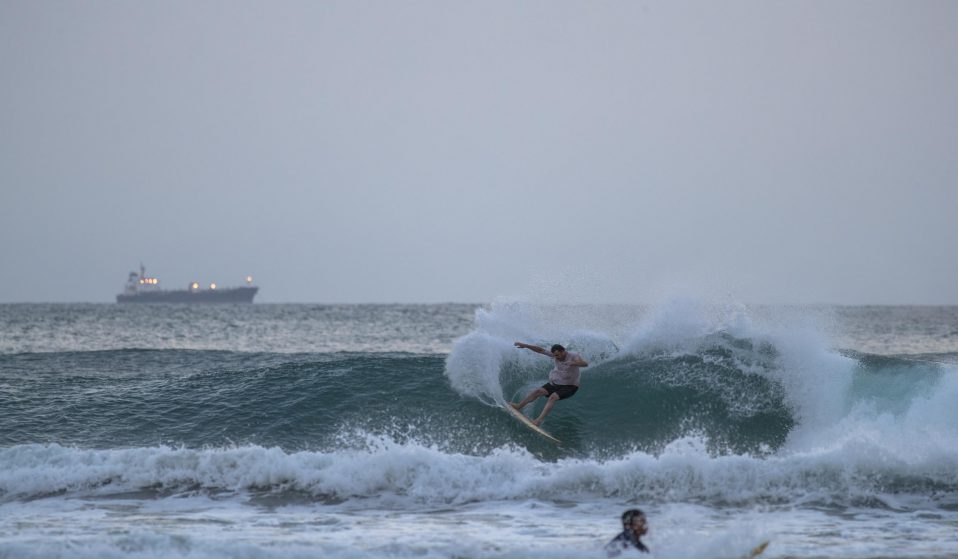 Festival Director Demi Taylor picks her highlights from the 2018 lineup: from an epic exploration of cold-water surfing in Siberia, to Chas Smith’s celebration of surf icon Lisa Andersen.

The eighth edition of the international London Surf / Film Festival returns to the city’s Regent Street Cinema on 10 October, 2018.

Bringing to the UK an exciting lineup of feature premieres, innovative shorts and underground projects from the world’s best, 2018’s festival perfectly encapsulates the multi-layered world of wave-riding in its current form.

Notably, Surf legend Rob Machado is flying in to host a very special screening – and UK Premiere – of Momentum Generation, a film charting the rise of surfing’s most influential crew: Kelly Slater, Rob Machado, Shane Dorian, Taylor Knox et al. Meanwhile, Trouble: The Lisa Andersen Story offers a frank insight into the life of its enigmatic titular icon: a 4x women’s world champion, who changed the perception of what it means to be a female surfer forever.

This year’s festival also stays true to its pledge in shining a light on independent filmmaking, bringing epic surf films – from the likes of Dane Reynolds to Noah Lane – that showcase the peak of performance on the big screen. Impactful features such as Big Wata and The Sea Empowers go even further, showing how surf culture can be used as a tool for social change.

Ahead of its opening night, Huck caught up with Festival Director Demi Taylor to discuss her highlights from the 2018 lineup.

“Lisa Anderson changed surf culture forever. Her combination of style, power, independence and drive not only ushered in a new era in professional surfing, it strode across the divide into the mainstream, changing everyone’s perception of just what it means to ‘surf like a girl’. As a female surfer, I hold her in the highest regard – every time I paddle out, I can feel the impact of what she has achieved.

Lisa is enigmatic yet ambitious, reserved yet driven, and this film offers an intimate and honest insight into her life, particularly the challenges she faced as a young woman attempting to make it as the world’s number one. The fact its brought to us by Chas Smith – surfing’s most outspoken writer and cultural commentator – just makes it all the sweeter.”

“Kassia Meador is a stylistic brilliant wave-rider who blurs the line between surfer, artist and performer. Teaming up with director Bruce Miller, the pair have crafted a creative and captivating work, combining an epic soundscape and cinematography from Scott Soens and the late, great Sonny Miller. It’s a thought-provoking piece of art to stir the soul.”

“Just when you think every corner of the globe has been covered, something always comes out of the blue (or, in the case, out of the white) and blows your mind. With its epic landscapes and vast horizons, the film – directed by, Konstantin Kokorev – is one to remember.

In Siberia winter, water temperatures average just 2 degrees and snow lays heavy on the beaches. That’s without mentioning the blizzards to contend with, too. Priboi depicts cold-water surfing at its very limits: the groundbreaking, visually-arresting masterpiece is a two-year quest across the vastness of the Russian continent, home to some 37,000 km of coastline. It’s a must-see surf exploration.”

“Surfer Poll-nominated filmmaker Andrew Kaineder teams up with stylish chargers Noah Lane and Harrison Roach for a feature-length ode to an Irish Winter, when snow dusted the high grounds, and low edges spiralled with deep depressions in the raging North Atlantic. Narrated by writer and surfer Dan Crockett, it’s a moody, crisp and emotive watch. The barrels are deep, the action is jaw-dropping and the visuals will blow you away.”

“There are rumours that directors the Zimbalist Brothers sifted through 300kg of film footage from Taylor Steele and the personal archives of Slater, Machado, Benji Weatherley, Shane Dorian, Taylor Know, Pat O’Connell, Ross Williams. That degree of unprecedented access and level of commitment has certainly paid off!

These surfers were the paradigm shifters and, in the hot house environment of Hawaii’s North Shore, their heady mix of camaraderie and deep-seated competitiveness pushed them to levels of performance previously unseen. Momentum Generation provides the insight into those key moments of contemporary surf history – the rivalries, relationships, lives and losses – from an insider’s perspective, with an honesty and openness that make the film truly special.”

“Filmmaker Tony Harrington initially set out to make a series of short films. What he ended up with is a beautiful and uplifting feature that explores the impact that surfing – and the ocean – has on a series of different characters: from icons to grommets, young, old, men, women, Australians, Hawaiians and Californians. The result is a film that encapsulates why we as surfers build our lives around those precious moments we share in the salty margins.”

Join us at the 71a Gallery on 13 October, 2018 for an exclusive photo show with Rob Machado, in celebration of Momentum Generation.

Linkedin
RELATED ARTICLES
OTHER ARTICLES
The musician, DJ and founder of Monika Enterprise reflects on a career defined by revolution and rule-breaking.
As the role of the nuclear family is increasingly called into question, people are finding new ways to exist outside heterosexist norms.
Those set to be impacted by the governments ’undemocratic’ bill explain why it risks silencing them.
Hundreds gathered together to protest the policing bill by making as much of a racket as possible.
In Sheffield, food delivery drivers are fighting back against one of the giants of the gig economy.
In the UK, Hongkongers are continuing to stand in solidarity with the pro-democracy movement.