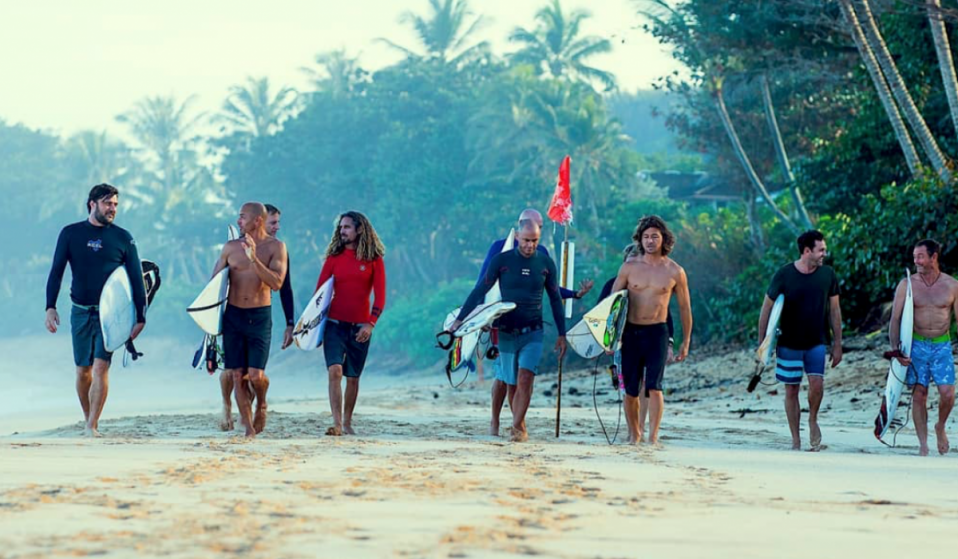 In 1992, Taylor Steele made waves with Momentum – a 35-minute film about young surfers in Hawaii. Now, two decades later, a new doc is exposing the whole story.

In 1992, Taylor Steele made waves with Momentum – a 35-minute film about young surfers in Hawaii. Now, two decades later, a new doc is exposing the whole story.

When Taylor Steele released his seminal 35-minute film Momentum in 1992, surfers watched it with rabid intensity. And then they rewound the VHS tape and watched it again.

They learned the surfers’ names and styles. They studied Slater in the barrel, Taylor Knox’s rail work and Kalani Rob above the lip. They listened to the driving punk and bought Bad Religion CDs. And they watched it again, until Momentum 2 came out.

They imitated the humor and would follow this core group as surfing grew from the fringes to cultural prominence. And then they watched it again, because at the time, there were no curated Youtube channels. There was no Spotify to discover new music. There was no Instagram.

“It was a beautiful time because people appreciated what we worked for,” reflects filmmaker Steele, who has gone on to receive acclaim from far beyond the surf world. “They would watch it for as long as it took for us to make it. That will never happen again. Today, something that takes a full year to make, people will watch it once and be done with it, or they want just the highlights. It was an exciting time to make stuff because you felt the appreciation.”

When I meet him, he’s assembled with his old surfer friends in New York City. In just a few hours, the world will see Momentum Generation – a poignant documentary by Michael and Jeff Zimbalist, which spans 30 years of the group’s collective rise. “I think that motivated everyone to put energy into those movies, the fact that they were going to be watched,” says Steele. “You knew it was going to be out there.”

Momentum Generation is, at its core, a film about growing up. The plot is as much about the characters as the age it’s set in, chronicling the friendship and careers of Steele, Rob Machado, Slater, Knox, Kalani Rob, Pat O’Connell, Shane Dorian, Benji Weatherly and Ross Williams. From the early days, all piled into Benji Weatherly’s family home, they overcame the intimidation factor at Pipeline. They made the world tour. They experienced love, the death of a close friend, and heartbreak. They became celebrities to their generation. And they dealt with all of the struggles that came with that.

“It was like an onion,” muses Knox. “This movie just peeled away the layers.”

“We would have stayed that close if we didn’t have sponsors, heats and pressure. It really affected our relationships. Shane wouldn’t know what my sponsors were telling me, what I had to do, and the pressures they were putting on me. It affects your friendship. I think if we would have been on an island, growing up as friends without pro surfing, we wouldn’t have run into a bunch of issues that we did. At the same time, we kept driving ourselves to stay on this train because it kept us together. If I were to fall off tour, I wouldn’t be able to hang out with these guys, and that was the whole point, for me, of being on tour. I didn’t want to be left behind. It was just way too much fun.”

The interviews, the reunion surf trip that provides the final scene, and now the upcoming release of the new film, have all been reasons to bring the Momentum crew together again –and it has been a therapeutic process.

Knox continues: “Sometimes, we didn’t pat each other on the back and say, ‘Dude, are you alright?’ But it’s good to be in the here and now, seeing this. All that stuff has been stripped away. We don’t give a shit about any of that stuff. It’s not going to get in the way of who we are or our friendship ever again.”

The Emmy-nominated Zimbalist brothers, best known for insightful sports feature docs like Arnold’s Blueprint, The Two Escobars, PELE, and Favela Rising, are not surfers. But they grew up aware of the cultural relevance of the Momentum crew and Steele’s films. 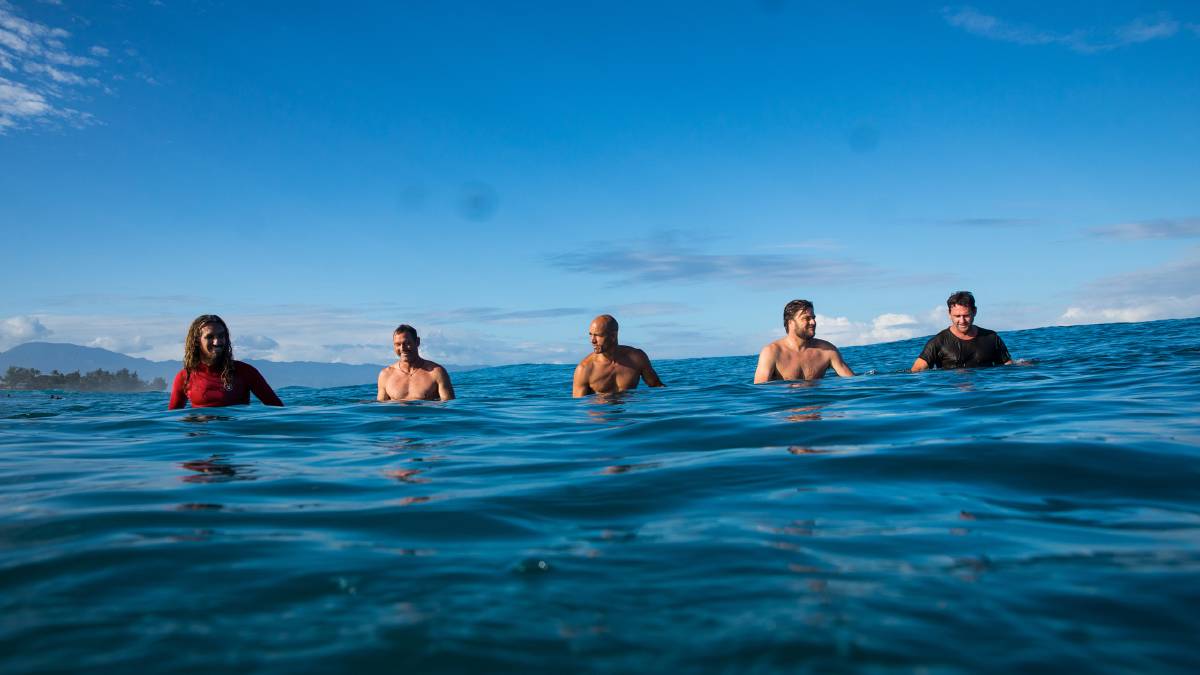 “I think the most important thing about Taylor’s work, compared to when I was getting paid to free surf and do TV shows, was the legitimacy that his movies bought,” says Weatherly. “It was undeniable. If you were in his movies, it’s because you were at that level. For 10 years after, I was just getting by, but not as focused as I was for his movies, putting so much time and effort into it. If you were in it, it was undeniable. It was the biggest thing ever.”

Steele is particularly excited that much of the footage he’d shot didn’t really have a logical home until now. When the Zimbalist brothers arrived at his California warehouse, he filled their car with 500 pounds of Hi8 tapes. With no room left in the car, their assistants had to take a taxi back to the studio. They sourced footage and photos from 138 sources. “I didn’t have any space for all this stuff I shot, so it’s nice to see it get released with this project,” says Steele.

Momentum Generation is an important film because it documents a time right before the information age, and before we could see what our icons were doing in real time. “The novelty of discovering something underground was really exciting in your formative years, your adolescence and 20s,” explains Michael Zimbalist. “So the scarcity of access of what these guys were up to just increases the value of that VHS tape or that surf magazine. You treasured the few videos, the few photos, the few songs that you have. They were that generation’s version of viral in all the right ways. That was important to them.”

As VHS gave way to DVD, the surfers moved to the next phases of their careers, and the world changed.  “I think we were pretty lucky in that we had become established in the time before the internet,” explains Shane Dorian. “We had this massive generation of people worldwide that all had surfing in common who had seen these eight films. They’d been anticipating these films every year, for a decade. ]That was a platform and had people that were psyched on what we were doing, so when the internet happened, we were able to have way more options because of Taylor’s films.”

It’s an important tale, bolstered by the perspectives of families and other relevant surfers. The story will be of particular interest to surfers, but the Zimbalist brothers have told it in a way that will be extremely relatable to a mainstream audience.

“You’ve got to find the patterns that are true across all the characters in order that the forward momentum is uniform as it were,” Michael Zimbalist adds. “You have to let go of the individual arcs for the sake of the story.”

Momentum Posse, an exhibition presented by Huck and Rob Machado, is showing at the 71a Gallery from 2 – 5pm on 13 October, 2018.

Linkedin
RELATED ARTICLES
OTHER ARTICLES
Proposals to introduce a minimum GCSE threshold for student loans will disproportionately affect those from marginalised backgrounds.
Photographer Arthur Grace recalls travelling through the Soviet Bloc and finding ways to evade the surveillance of his work.
Curator Antoine de Beaupré discusses his immense record collection and what it tells us about the intersection of music, photography, art, and commerce.
The last few years have seen an increase in LGBTQ-led initiatives to feed the hungry, with many finding ways to stay afloat despite the challenges.
50 years since its inception, and the campaign calling for recognition that capitalism depends on domestic labour is as pertinent as ever.
Photographer David Hoffman recalls documenting the extreme wealth inequality around Tower Hamlets and Hackney int the 1980s.