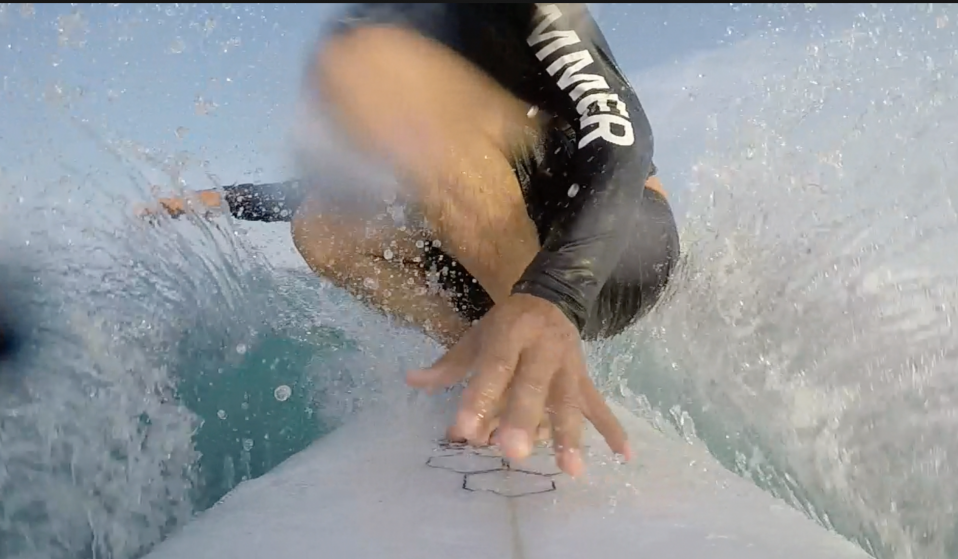 Why the Maldives? Because of a reeling and friendly righthander called Sultans, at which I have studied videos of Dave Rastovich, Taylor Knox, Tom Curren, and Brad Gerlach laying out fierce gouges and fiery hacks.

Because I’m curious about surfing’s shifting demographics. When I began this wave dance in the late seventies we were a tribe of ratbags and work-dodgers. Unfathomable was the notion of surfers staying at five-star resorts, surfing by seaplane and yacht.

Because with its highest peak at 2.4 metres, the Maldives have the distinction of being “the country with the lowest natural highest point on the planet.” With climate change, the hourglass has tipped. In twenty years it may all be gone.

I surfed Sultans for three days in a row. On the biggest day it was three feet overhead; on the smallest day head-high. It’s a kind and forgiving wave. Not a screaming barrel, not a roping freight train, but a wave that buttresses you up, allows you to botch lines and mistime turns and still make it. Tubes happen, though it’s a high tube, almond-shaped, softer than a top-to-bottom tube but also trickier.

All three days, in both the morning and evening sessions, the wind blew offshore, burnishing the faces in dimpled, iridescent glory. There were typically three or four boats anchored in the channel, and about a dozen to two-dozen surfers in the water. I heard Spanish, Italian, Portuguese, German, French, and English spoken—as cosmopolitan a lineup as I’ve ever encountered. Skill levels were low to mediocre.

A perfect harmony exists between the Maldives breaks and the high-end resorts. More often than not, the surfer that can afford to stay at the Four Seasons will be a successful professional — and thus a recreational rather than an expert surfer. Five-star accommodation has little in common with your Pipelines and Teahupo’os and G-Lands.

I got quite a few great rides at Sultans. Following the top-turn section out the back is a race track section that favors long, swooping pump turns on which the board feels like it goes beyond ninety degrees, like it should get sucked up over the falls. On a longboard this would be the sideslip boogie zone. On a shortboard it’s weightless, heart-in-the-throat stuff.

I pulled into a few barrels. They were high. The lip slapped down with a roar. Out the hole I saw palm trees, shimmering turquoise, Simon the surf instructor pushing a thirtyish Japanese girl into an inside wave. Under my board I felt a backdraft, I felt something like an air hockey puck, on the wave, in the wave, but also hovering slightly above the wave. The tube clam-shelled. A chandelier of water cracked me in the face. I went down, got rag-dolled, waited to crash into something hard — the reef, my board — but didn’t. I came up smiling.

The Four Seasons at Kuda Huraa’s surf program is run by Tropicsurf. It’s luxury surfing to the nth degree. Before each session my board was waxed for me. The boat captain dropped us as close to the lineup as possible before anchoring in the channel. After surfing I’d paddle back to the boat. A couple dozen metres before I got there a polo shirt-clad deckhand awaited me. He dropped the ladder, took my board. As I stepped off on the hot deck a second deckhand was there with a bucket of cold, fresh water. He dumped it over my head—a manual shower. A towel was passed to me, as well as a bottle of chilled drinking water. A third deckhand chopped fresh coconut into little bite-size pieces and passed them to me on a plate. The boat rocked. The Indian Ocean shimmered. I felt like a sultan.