Outdoor / Surf / Indigenous island people and the expats: Surfing in the Maldives with Jamie Brisick 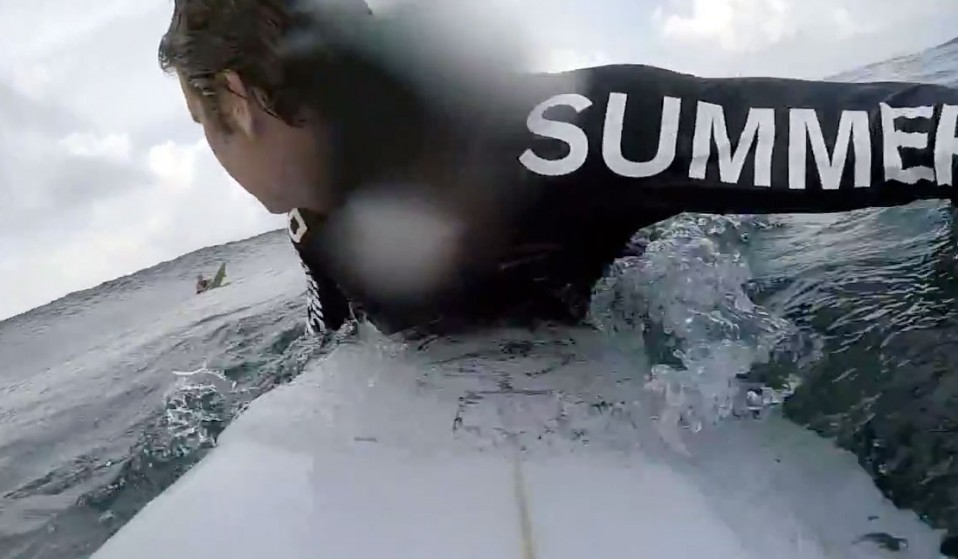 “There are no dogs in the Maldives. In Sunni Muslim culture, dogs are filthy animals.”

Forty-three-year-old Chris Prewitt and I are sitting out the back at Sultans. The sun is blazing, the ocean is an azure skatepark, the surf is head-high. Between waves Chris fills me in on the Maldives.

“1,192 islands all up. 202 are inhabited. The islands and atolls cover over 90,000 square k’s — it’s probably the most geographically dispersed country in the world. I first came here in 2000. There were hardly any tourists surfing back then. The locals on the outer islands were riding small pieces of wood for bodysurfing. We were able to give quite a few kids their first surfboards. As with many indigenous island people, I found that they picked up surfing so much more quickly than others. There were probably five surf boats working at that time consistently, so the surf was really uncrowded. There was a small group of locals surfing in Malé and a couple at Pasta Point Resort. Iboo Areef, who has been the National Maldivian Champion for years, was a huge inspiration for many of the young local kids coming up.”

A wave comes. Chris whips around, takes off. A tall, lanky regular foot with clean style, he hooks off the bottom and arcs off the top.

Chris grew up in Vero Beach, Florida. He found surfing at a young age. As a graduation gift from Tampa University, his parents gave him a triple coffin board bag and a world atlas. He immediately hit the road — Costa Rica, the North Shore, Australia. While in Queensland, Ross Phillips, the owner of Tropicsurf, showed him video footage of the Maldives. The waves were dreamy and perfect, the water looked weirdly thirst-quenching. Chris hopped the soonest flight he could get. A diver and fisherman as well as a surfer, he “pretty much found paradise”. He got a gig as a Senior Coach, Guide, and Training Manager for Tropicsurf. “I love sharing surfing with people from all over the world in such a magical place. I get to meet a lot of successful business people — I love to see them let go of the rat race and get stuck into finding the stoke in surfing,” he told me.

Chris pours his heart into his work. During my first session at Sultans, he showed me the lineup markers – a pair of palm trees and a mass of foliage. Riding home in the boat one evening, trade winds whipping, my baseball cap blew off and landed in the inky sea. Reflexively, as if it were a $500 bill, Chris dove in and retrieved it.

He arrives back in the lineup. I ask him when the surf scene kicked off here in the Maldives.

“Tony Hussein, an Aussie, got shipwrecked here in 1973. He ended up staying. He surfed here solo for years, explored the islands on traditional dhoni boats. He started the first surf camp here at Pasta Point.”

Chris nods towards the neighboring island we pass everyday en route to Sultans. A resort sits on an idyllic point with a long lefthander peeling across it. I’ve only seen it with a severe cross-chop, but according to everyone I spoke to, on the right wind and swell…

“It gets really good, but it’s privatised. Can’t surf there unless you’re staying at the resort.”

A wave sneaks up on us. It’s sapphire blue and velvety. We stroke towards it, just barely punch under the breaking lip. Needles of spray shower down on us. A rainbow dazzles for a second then disappears. We straddle our boards.

“Anyway, Tony Hussein married a local woman. He lived a good life here. About five years ago he died — he had a heart attack while kicking out of a wave at Pasta Point.”

“Are there many local Maldivian surfers?”

“There’s a really strong community that’s starting to blossom. The locals have surfed in the ‘QS events here. There are some local female surfers. Malé, the capital, has a break that might get destroyed. They’re trying to build a bridge from the airport island to Malé — I think it’s a Chinese company. The local surfers have been rallying against it. There’s a ‘Save the Wave’ campaign. But the locals are really shy and giving. They’re genuinely giving and sharing people.”

I tell Chris that I’m blown away by the Four Seasons, the service, the luxury of everything. He laughs.

“’The art of luxury surfing’ is our mantra. But seriously, this is a guilt-free surf trip. Guys can bring their wives and kids and they’re looked after, they’re pampered. We’ve got consistent surf, water’s bathtub warm. Doing what I do work-wise, there’s nowhere else I’d rather be.”

A set looms. We drop to prone and paddle.

“After fifteen years of being here,” adds Chris, “I still get once a month or so that moment where I stop and can’t believe my luck.”