Outdoor / Surf / Shark attacks Mick Fanning during a surf comp. But do we have ourselves to blame? 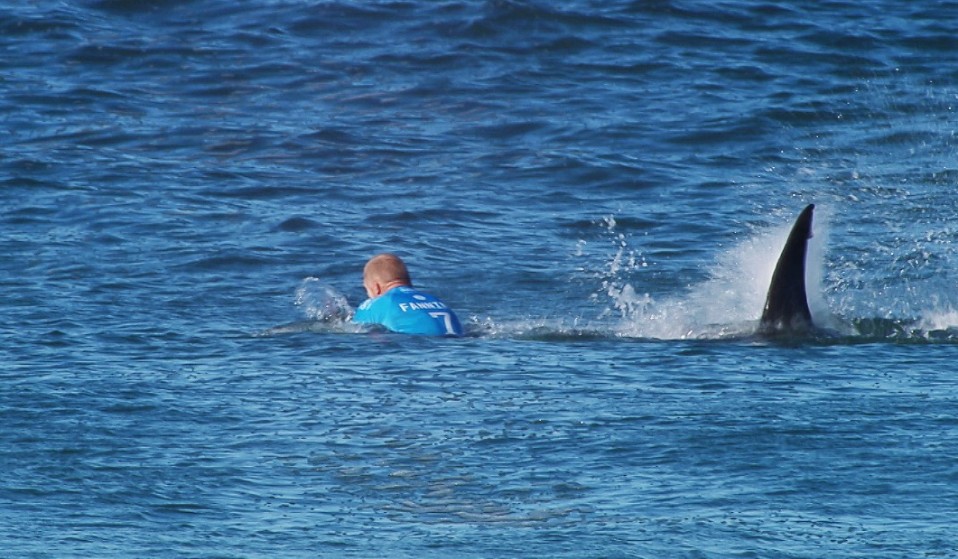 Champion surfer Mick Fanning was lucky to escape with his life after a shark attacked him in the finals of the J-Bay Open this weekend. But with shark attacks on the rise globally do we need to accept some responsibility?

Champion surfer Mick Fanning was lucky to escape with his life after a shark attacked him in the finals of the J-Bay Open this weekend. But with shark attacks on the rise globally do we need to accept some responsibility?

Surfing hardly ever makes the national news in UK. Once in a while a monster swell hits these islands. There’ll be a smattering of badly informed surfploitation pieces in the mainstream press and on the BBC. But when an unsuspecting shark poked its pointy nose into the final of the J-Bay Open and tickled former world champ Mick Fanning in the ribs, we had to be prepared for a perfect storm of mainstream hackery.

And the newly formed, allegedly fracking-funded World Surf League must be rubbing their hands with glee at the spectacle of Julian Wilson and ‘Manly’ Mick Fanning shrugging off a live-streamed attack. Gazillions of views. An acreage of follow-up column inches. Spikes in viewing figures for the next round on the tour.

The alarmist headlines, though, come at the height of a thread that’s been running through surfing lately – call it galeophobic or galeophilic. If you’ve even paddled out in zones where the men in grey suits have been known to strike you will have come across people who love to tell shark story, musing on the statistical likelihood or otherwise of coming to blows with the apex predator of the deep.

Controversy has been raging especially hard in South Africa these last few years. SA has of course seen an unprecedented rise in Shark tourism. These days its easy. You can pay a man to lower you down in a cage and check out the beasties for cash up close and personal. To attract the monsters of the deep a practice known as ‘chumming’ has been growing – where shark bait in the form of offal and other cuttery from the fishing industry is weighed out the side of boats. The idea is of course that tourists paying hard cash for their once-in-a-lifetime shark perving spectacle need to get the goods, like, now. Our long-evolved fishy friends have in turn associated the unguent effluent of chum with the presence of humans as well as a rare and hard-to-find food source. It’s hardly surprising, then, that – along with other environmental factors like rising sea temperatures – there has been, according to some reports, a blatant and alarming rise in the shark attacks.

It’s open-season, in other words, on shark hate as well as shark bait.

Organisations that care for the ocean environment, and who, unsurprisingly are often staffed by passionate surfers and other ocean users, are therefore caught on the horns (or should we say teeth) of a tricky dilemma. We want to be able to use the oceans safely. But we also don’t want to oppress and endanger species that cruise the beaches and points and river mouths of the world, and have done so for aeons.

A casual trawl through the webs will reveal a complex truth – that though shark attacks on humans, particularly surfers, are desperately rare compared to the amount of sharks we kill and cull for sport and food.

Whatever side of the debate you find yourself, stone me if I’m not going to go and buy a pair of Mick Fanning board shorts after this recent showdown. Coming to you soon with extra room for those unflappable cojones.

Linkedin
RELATED ARTICLES
OTHER ARTICLES
The demonisation of the shark may be rooted in centuries of irrational fear, but the threat it poses to the species is real.
Kelly Slater on swinging from the stars, prancing upon the planets, falling back to earth and his ambitions as a wave pool entrepreneur.
Shark conversationists call for a measured response to a fatal shark attack at Shelly Beach, New South Wales.