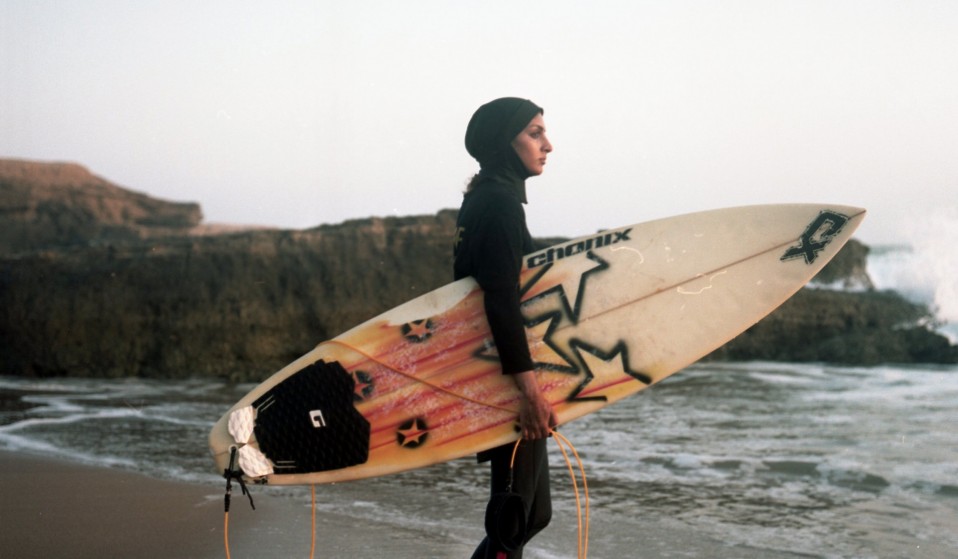 In the quiet Iranian village of Ramin, a revolution is underway. At its helm is Shahla Yasini - the first Iranian woman to have surfed in the country.

In the quiet Iranian village of Ramin, a revolution is underway. At its helm is Shahla Yasini - the first Iranian woman to have surfed in the country.

Ramin is a small village in the extreme south of Iran, located just a few miles away from the city of Chabahar. The region, known as Baluchestan, is the most remote in the country, and is known for its widespread levels of social deprivation. It’s here though, and here alone, that Iran currently offers a place with the potential to surf.

After arriving from Tehran, the desert scenes of Ramin are breathtaking. I’ve arranged to meet Shahla Yasini here, the first Iranian woman to have surfed in Iran. We meet in a taxi, both shy and hesitant. It was only a few weeks ago that I reached out to her on Instagram. Shahla offers me a cigarette. I tell her I’d been told it didn’t look good for an Iranian woman to smoke in a public spaces. She laughs at my clumsy comment, our timidness immediately falls away. 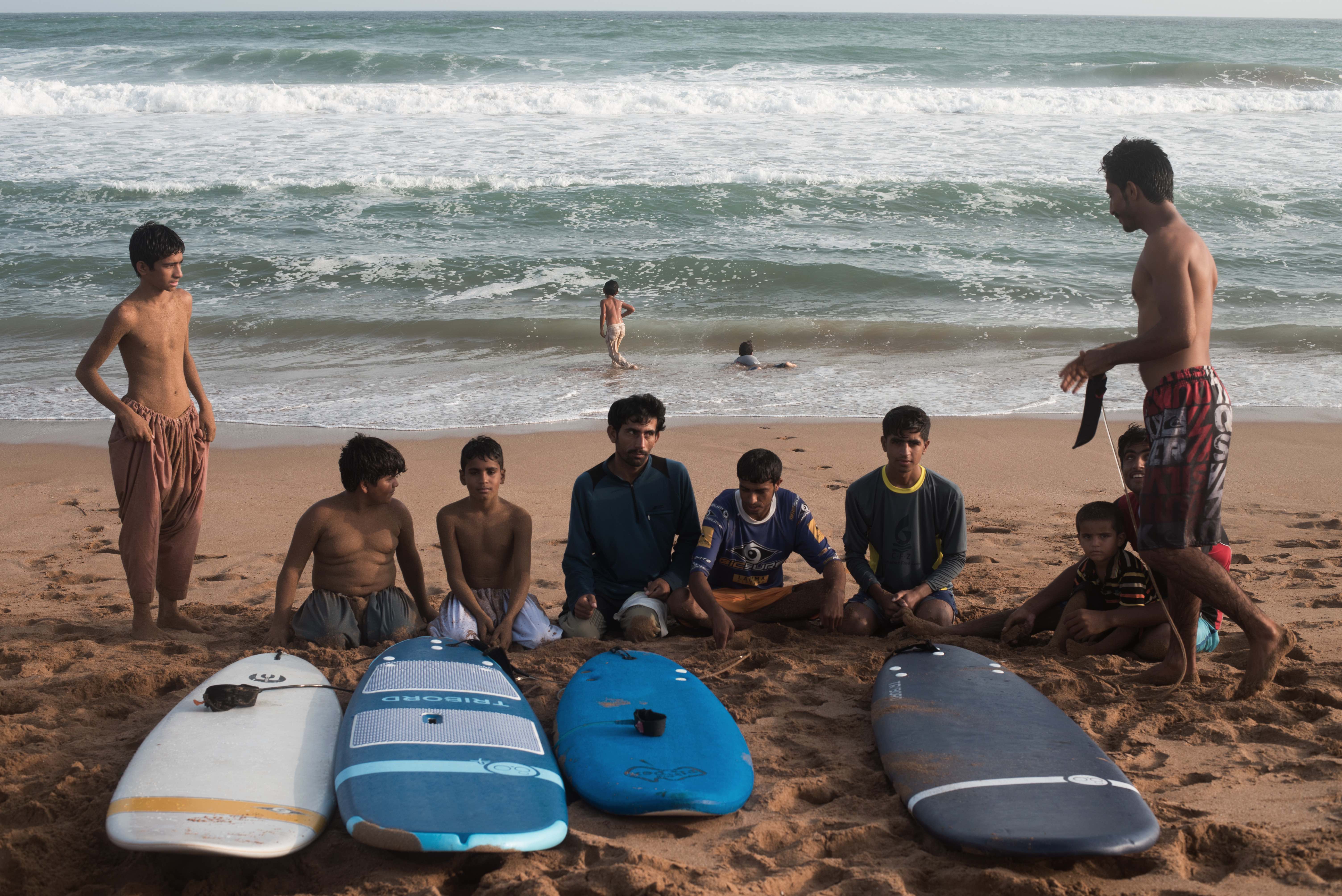 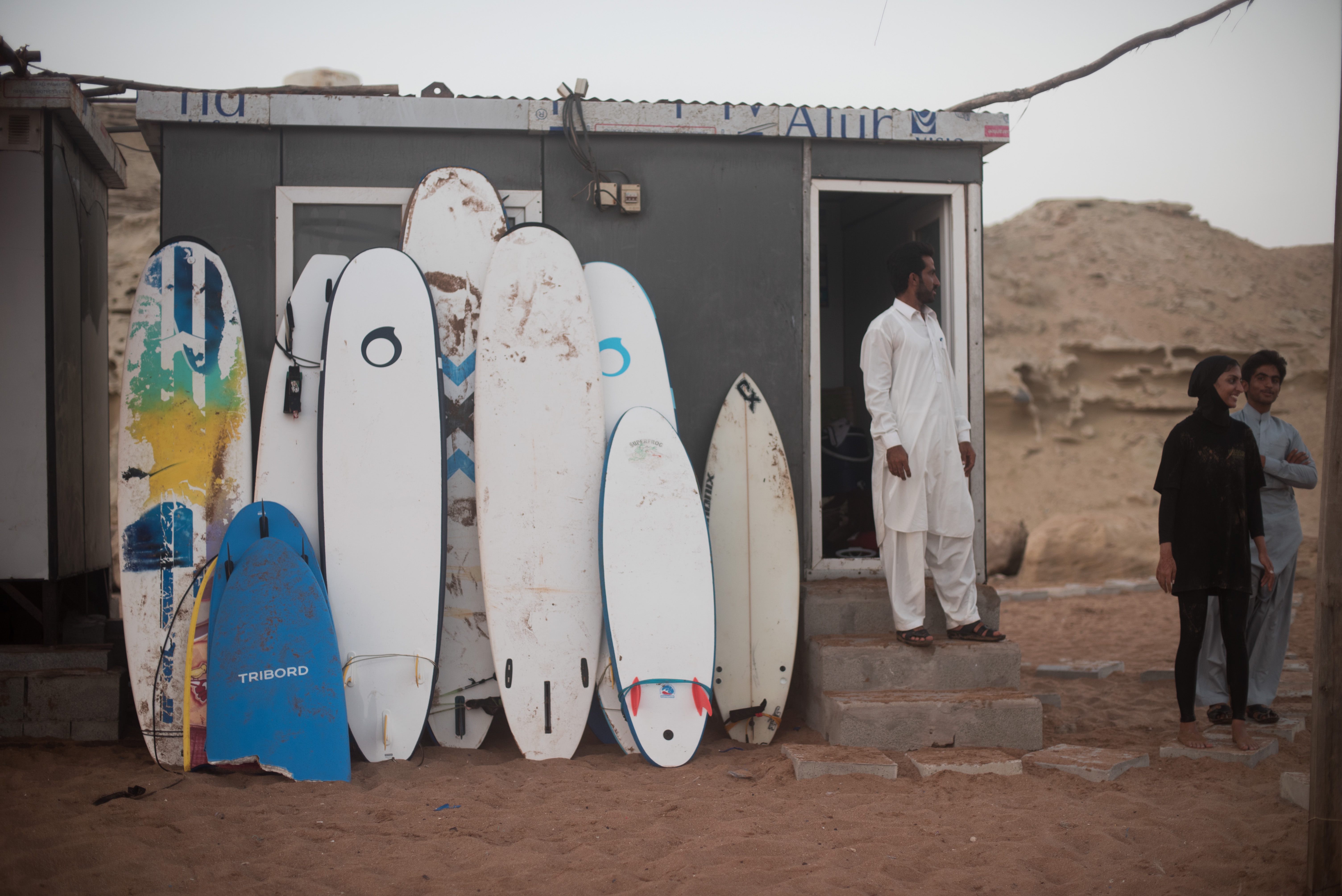 The night is quiet and warm when we reach the beach of Ramin. Shahla tells me about her strong connection to water, especially to the Indian Ocean, and about how that passion had prompted her to become a diver and lifeguard. Still, she could have never anticipated that in 2013 pro Irish Surfer Easkey Britton would extend  an invitation to Shahla to be part of the first women’s team to surf in that same Indian Ocean.

Partnered with another Iranian female athlete (Mona Seraji) , Shahla and Easeky managed to find the perfect surfing spot here off the beach of Ramin, a stretch of sea near a harbour with waves good enough for surfing throughout the summer. At the time, they didn’t know they were about to make history for Iranian women. Considering the proximity to the border of Pakistan and the ethnic and social instability of this region, no one had ever explored Baluchestan so deeply to discover a spot for surfing before Easkey, Shahla tells me.

Shams Fuladi was born and raised in Ramin, one of those local guys who back in 2013 was introduced to surfing thanks to Easkey, Shahla and Mona. Tonight, as we’re stood on the beach with only moonlight to see, he comes closer with his motorbike, shining his headlight at us before giving Shahla a hug.

After grabbing the attention of the local communities, the women athletes started teaching surf to the boys from the local villages, pioneering a new trend among the youngsters. Since then, a new community of young Iranians have been populating the place: organising events, encouraging foreign guests to take to the waves, while searching for sponsors to donate equipment that might help sustain the ‘Makran Moj’ surfing site. 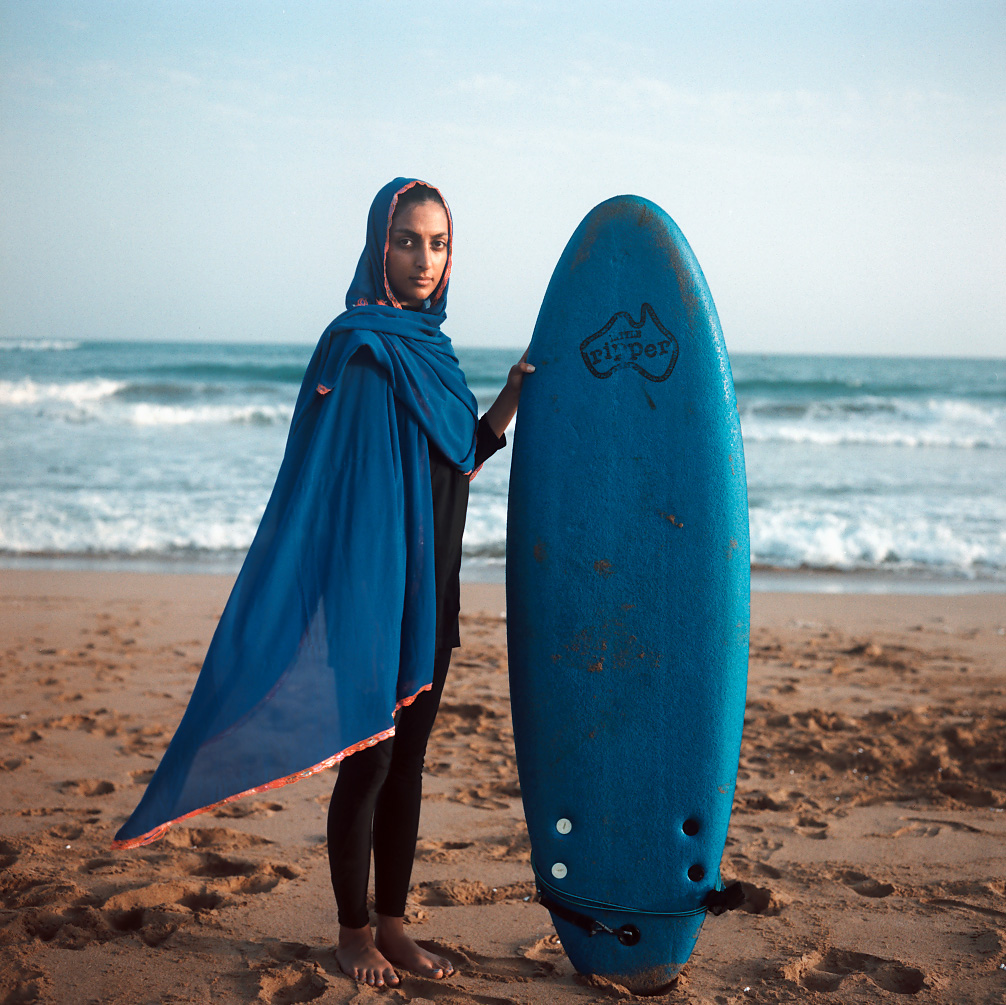 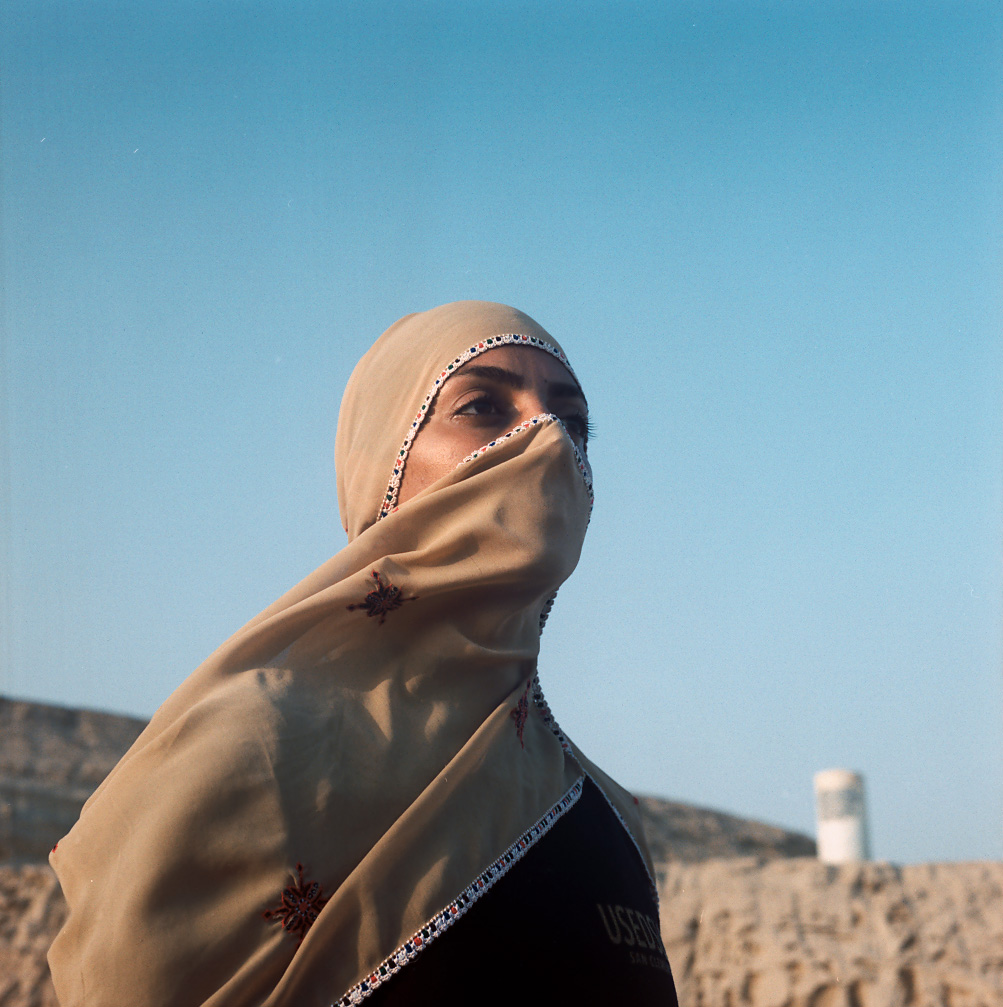 I decide to stick around for a while. Over the next few weeks, we’ll go to Ramin beach every single day. It’s September, and the wave season is almost coming to an end, however neither Shahla nor the local boys are missing a day of practice. I find myself in a limbo, witnessing one of the incredible paradoxes of Iran entangled between modernity and tradition. I find my attention shifting from boys holding surfboards and walking on the shore to local Baluchi families dining on the beach.

There are men smoking shisha and people praying at different times throughout the day. There are local women on Ramin beach too, but they are wrapped in their black chador, holding the hands of their children and waiting for the men to finish swimming in the sea.

One day Shahla tells me how sports in Iran are generally open to women, as long as their bodies are fully covered and their hair is not visible. The lack of sportswear suitable for Muslim women in water sports is, according to Shahla, one of the many challenges athletes like her face. 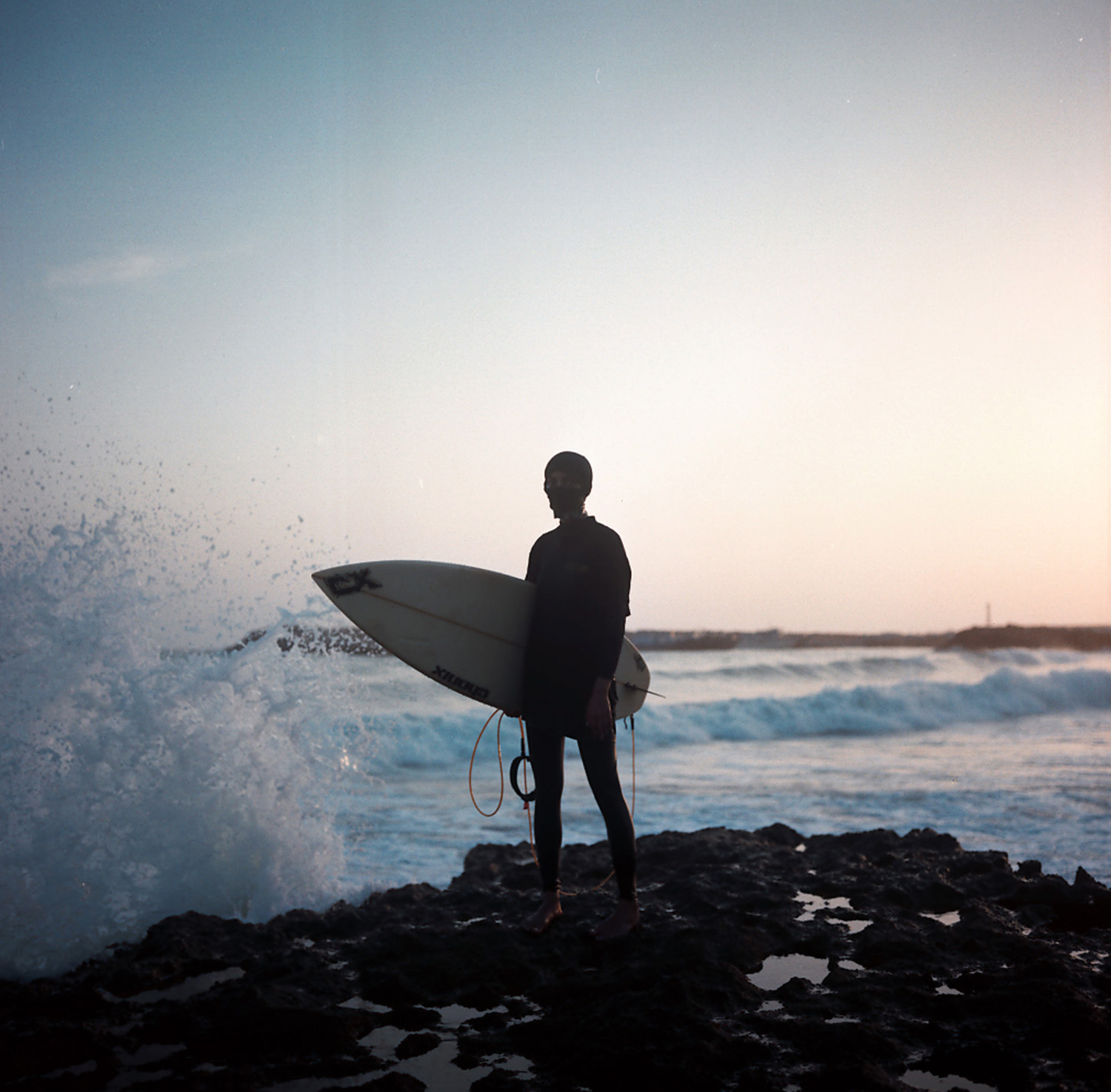 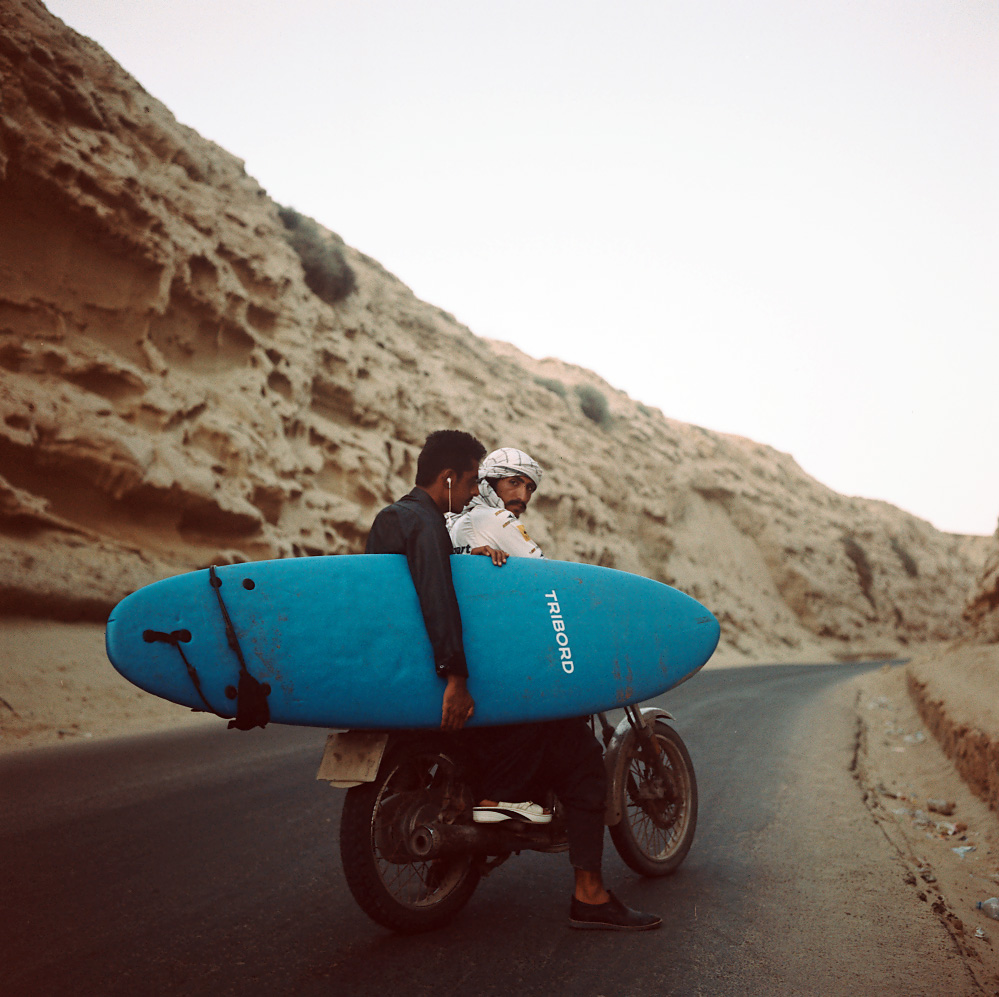 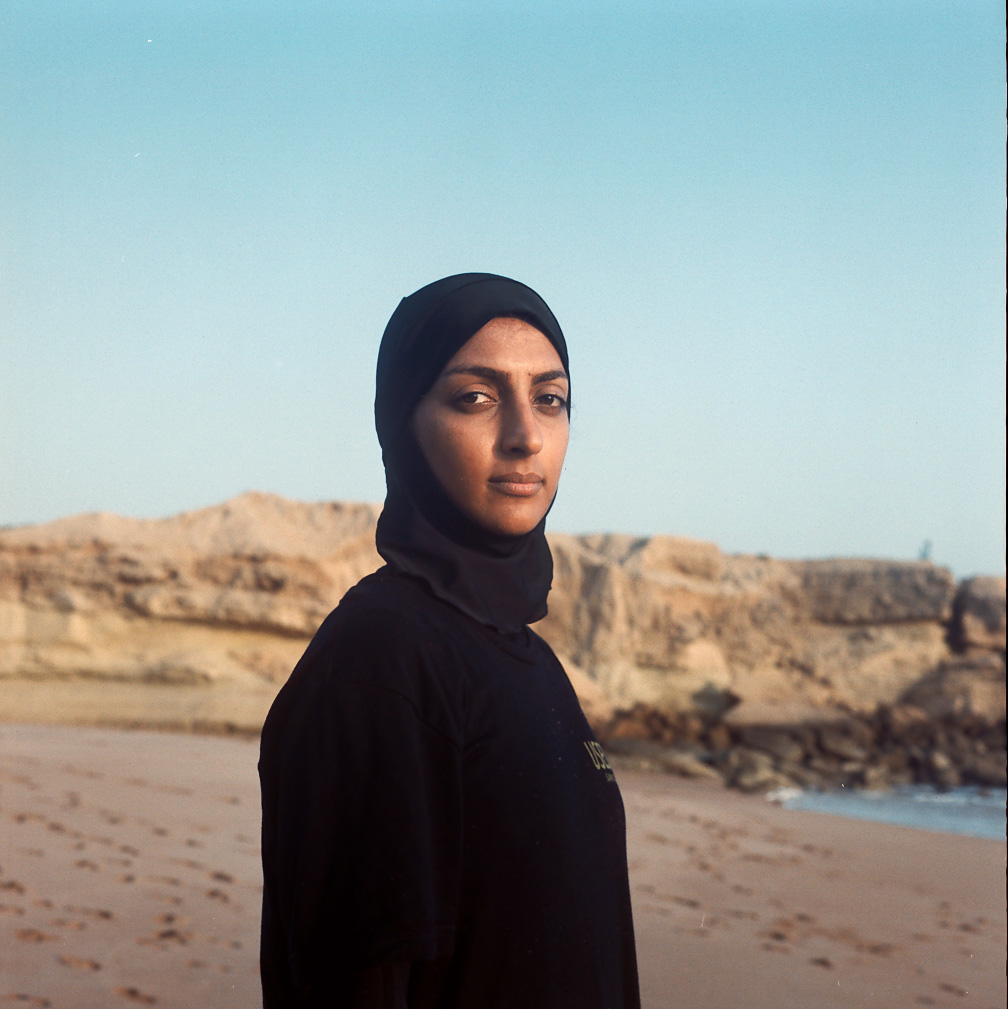 “The lack of freedom in movement prevents women from moving quickly and feeling comfortable in the water,” Shahla tells me. “It’s also further distancing other women who are not used to sports, stopping them  taking their chance to get close to water. Moreover, a very male dominated mentality is the greatest obstacle , especially here in Baluchestan. Myself and the other women involved in the surfing movement have to face and fight against.”

“Baluchi women are still kept secret, away from the beach most of the time, married to the household and without any chance to wish for a different perspective.”

Abed Fuladi, one of Sham’s older brothers, has been part of the surfing community here since its inception. “It will take time, decades perhaps, before Baluchestan gets accustomed to new trends and ideas,” he says. “I do think surfing has already made big steps, and the future of Ramin looks rather positive and hopeful.” 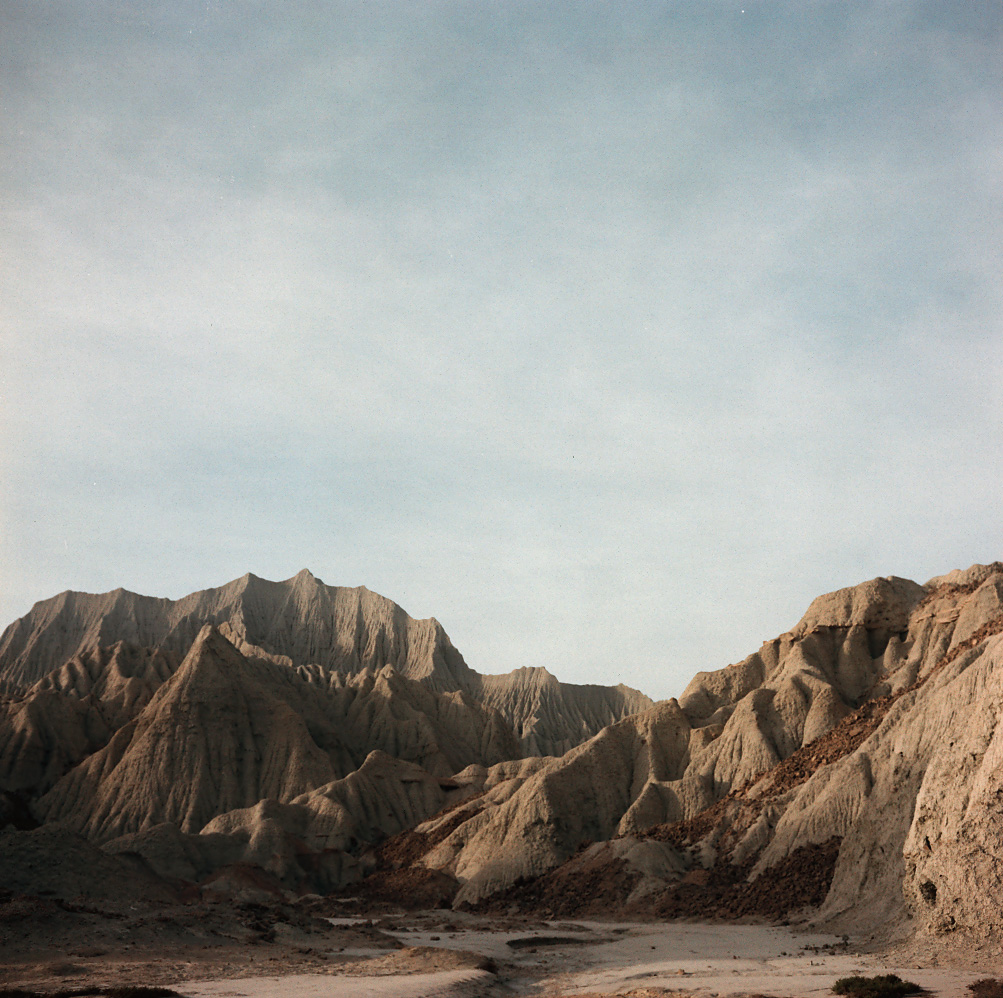 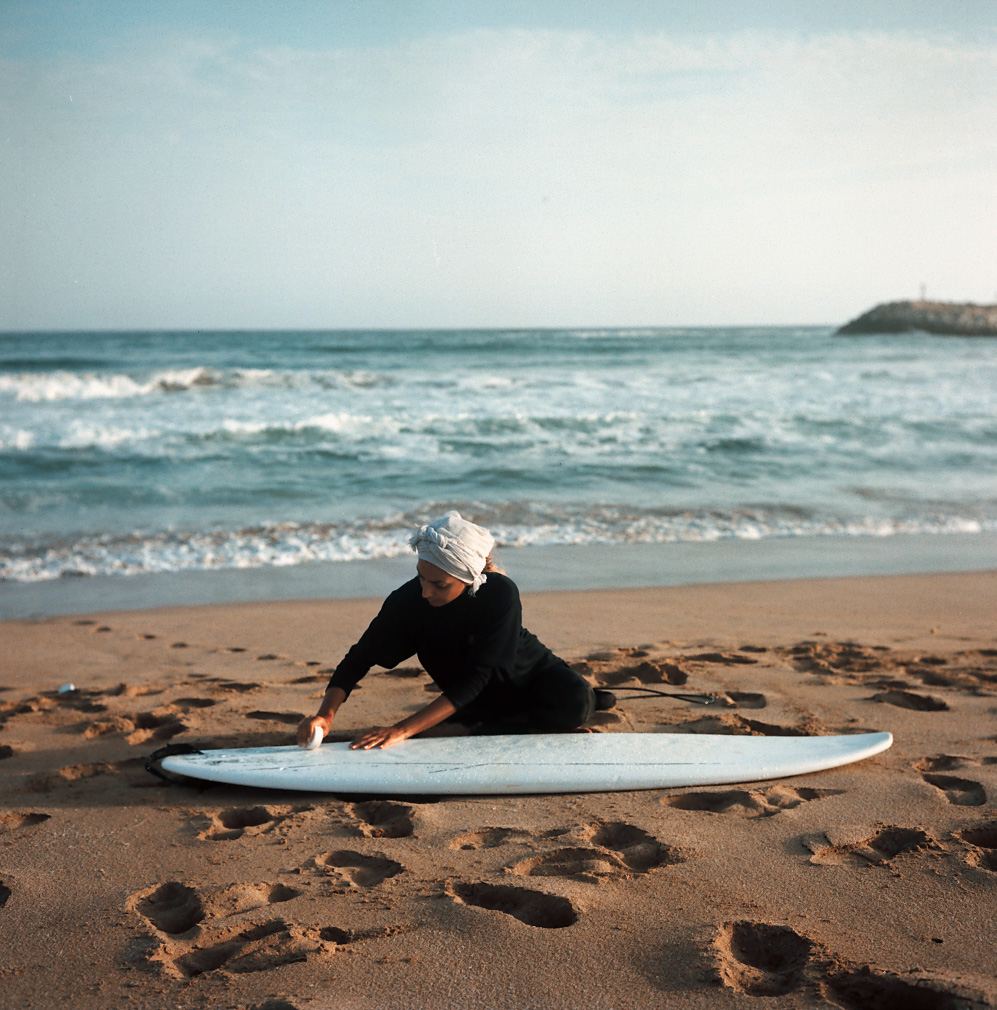 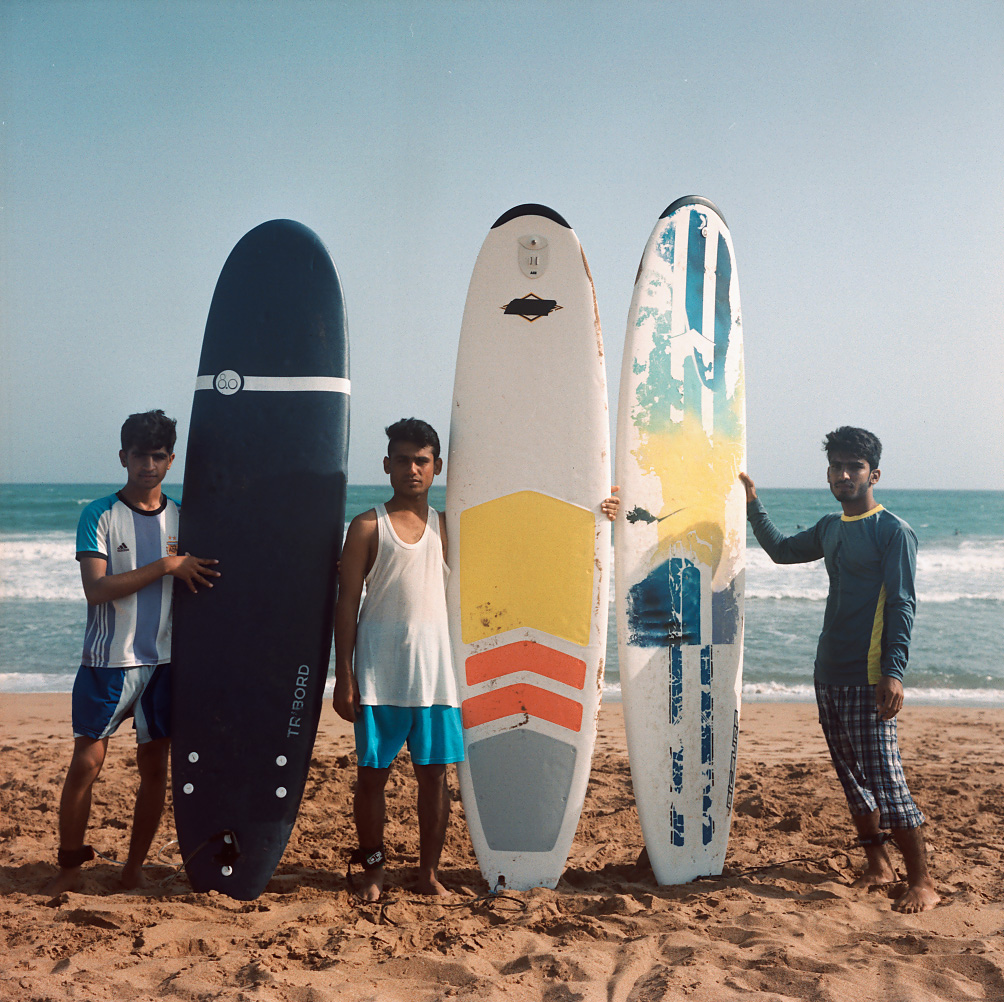 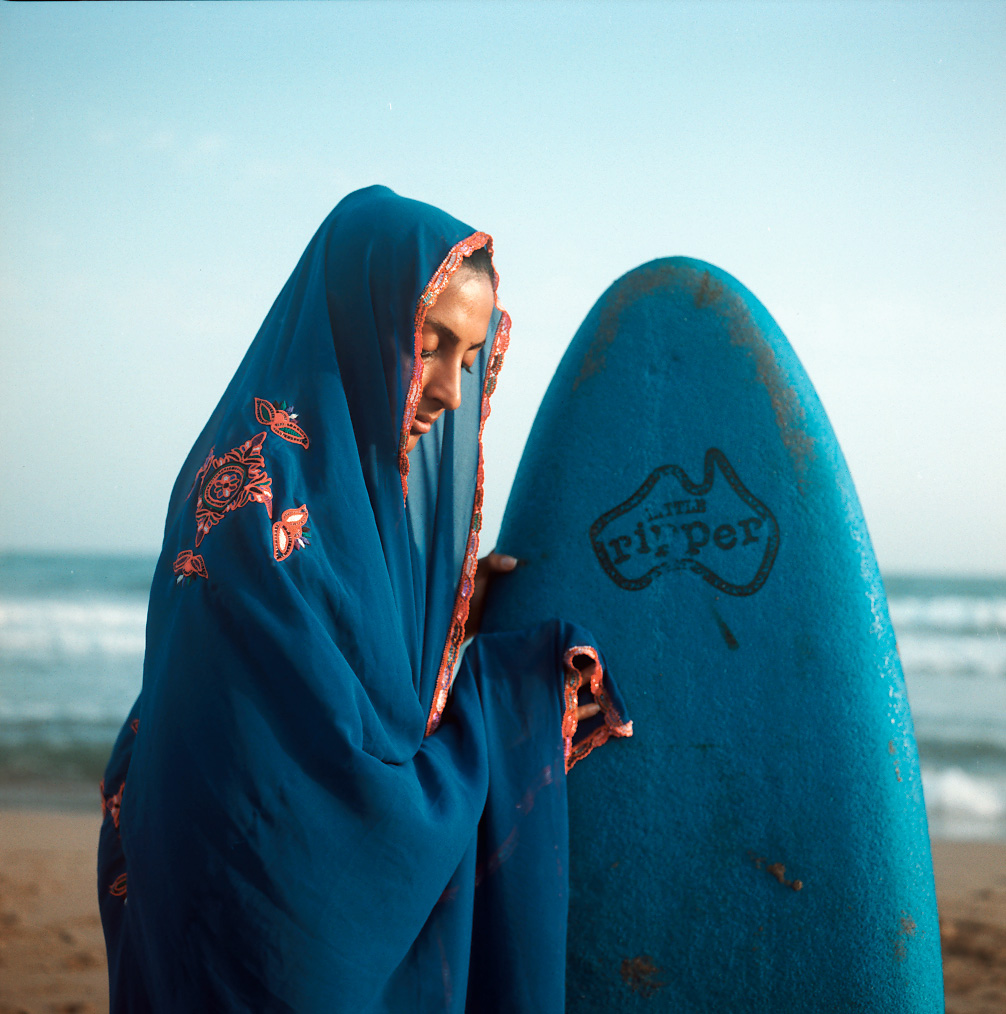 Linkedin
RELATED ARTICLES
OTHER ARTICLES
Following the release of his latest album God Don’t Make Mistakes, the rapper talks horror villains, police brutality and being unafraid to show his vulnerable side.
Our new magazine is here, starring the inimitable Mitski. Order your copy now and join us on a trip around the world.
The situation in Afghanistan remains dire, with many groups facing persecution at the hands of the Taliban.
Photographer Robin Graubard’s debut book offers an unflinching record of turbulence and change across the Balkans.
The government’s failure to take long Covid seriously has led to the formation of a group campaigning for the thousands of forgotten victims of the illness.
In the last of our dispatches from OFFF Barcelona, Rufus Deuchler and Vincent Gault discuss the future of creative process.