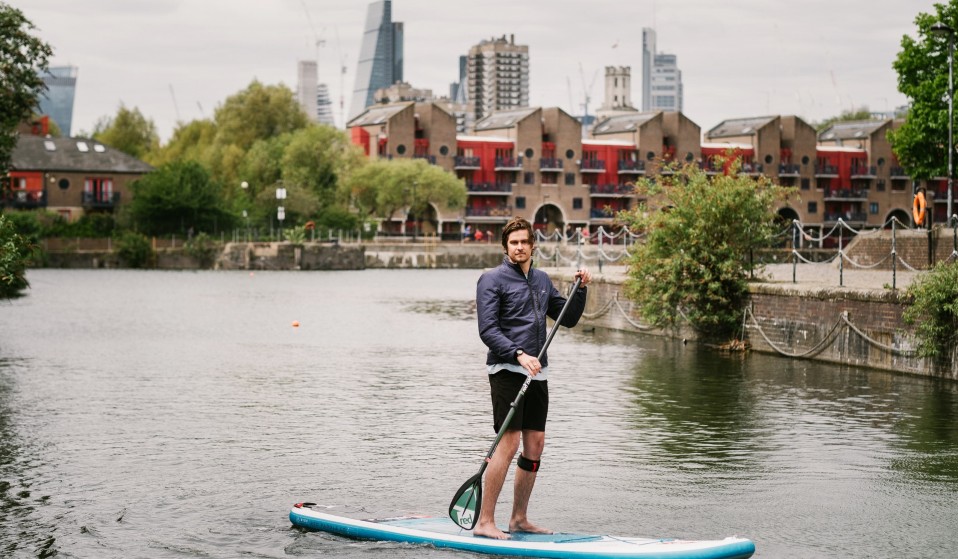 Living in the centre of a bustling metropolis doesn't mean it's impossible to escape onto the water. Grab a board and get paddling in the city.

Living in the centre of a bustling metropolis doesn't mean it's impossible to escape onto the water. Grab a board and get paddling in the city.

It’s possible to still have an adventure, even if you’re studio-bound,” says Ollie Stafford, Huck’s art director. “You just have to use your imagination.”

Ollie has surfed all manner of craft since he was a teenager and spends as much time as possible at the coast. With constant rolling deadlines in London, however, it’s vital for him to get out and get paddling as much as possible. “This is where the inflatable stand-up paddle board comes in,” he says. “It’s so nice to be able to take a stroll down to the canal with the board in the backpack and just get out on the water for an hour after work. I’m even thinking of commuting!”

London’s network of cuts, canals, basins and other waterways, each of which wind slowly down to the Thames, is a natural habitat that most Londoners simply pass by. But paddling the waterways is a beautiful aspect to city living that brings the potential of the stand-up paddle board (SUP) to life. “This time of year is my favourite,” says Steph Jed, a London-based photographer, who often hits the water with Ollie. “It’s amazing to take an early morning paddle or to jump in after work. It just really connects you to your environment.” 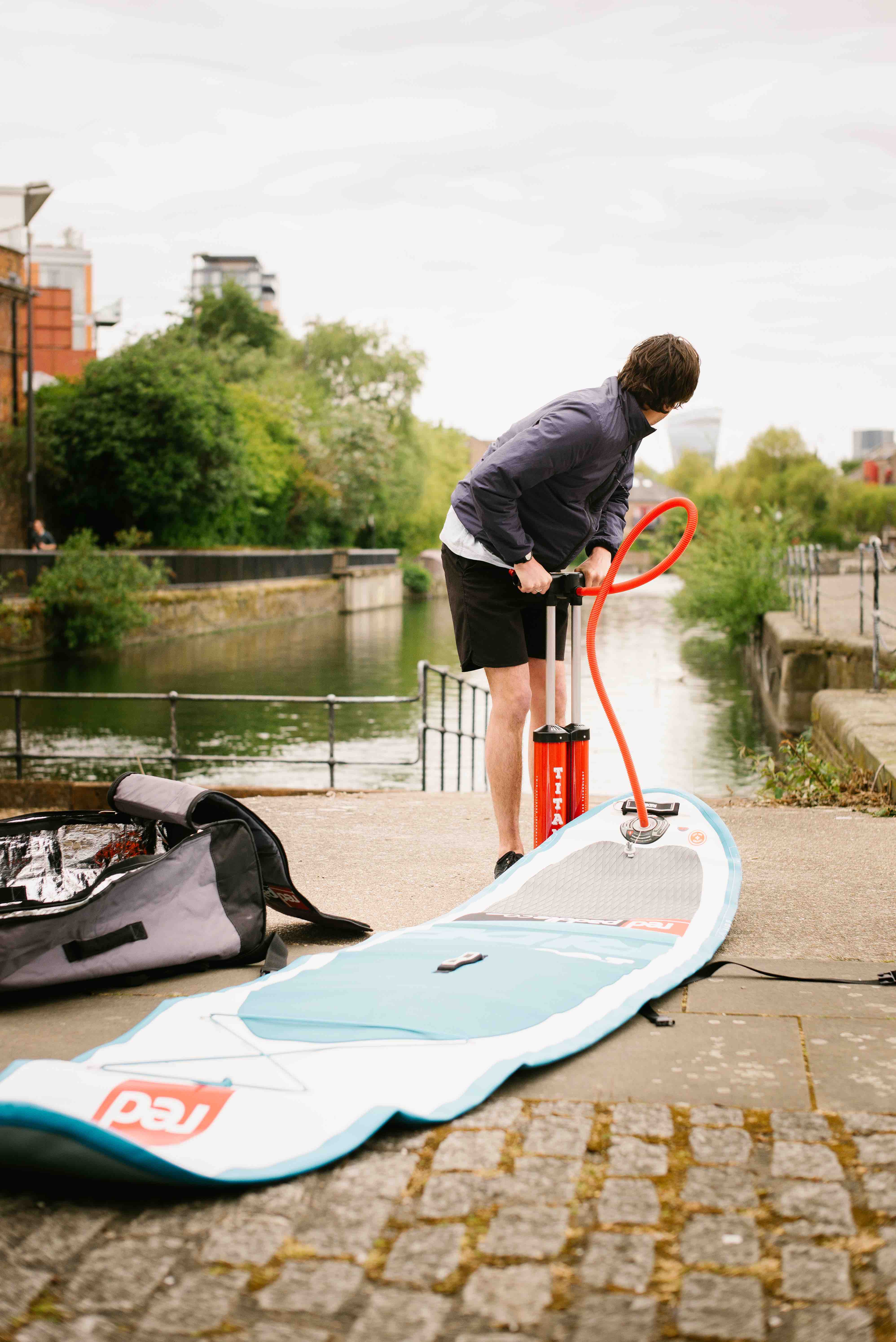 Even if you cycle around the city, with all the fumes and the steel flying around, that feeling of connection can be a hard thing to achieve. “Riding these boards in London isn’t of course the same as paddling out into the open ocean but it’s great for keeping acquainted with the physics of how a surfboard works as well as the environment,” adds Steph. “And you can get a real workout in just an hour or so. It certainly beats the gym.”

The beauty of Red Paddle Co’s inflatable boards are, of course, their portability. “They’re really easy to inflate with the big double-cylinder pump that comes with each of them,” says Ollie. “I reckon I can be up and paddling in about five minutes wherever I am. You do get a funny look or two but you’re starting to see more and more people on these boards because it’s obvious how practical they are.”

And indeed SUPs have been absorbed into mainstream surf culture all over the world. It’s well over a decade since Hawaiian pioneer watermen, like Laird Hamilton, forced them front and centre, by going hard in some of the most challenging conditions imaginable. Anyone who has surfed around the world knows the nightmare of turning up at a dream break to find your nose crushed, your tail squashed, and your rails creased beyond all recognition. 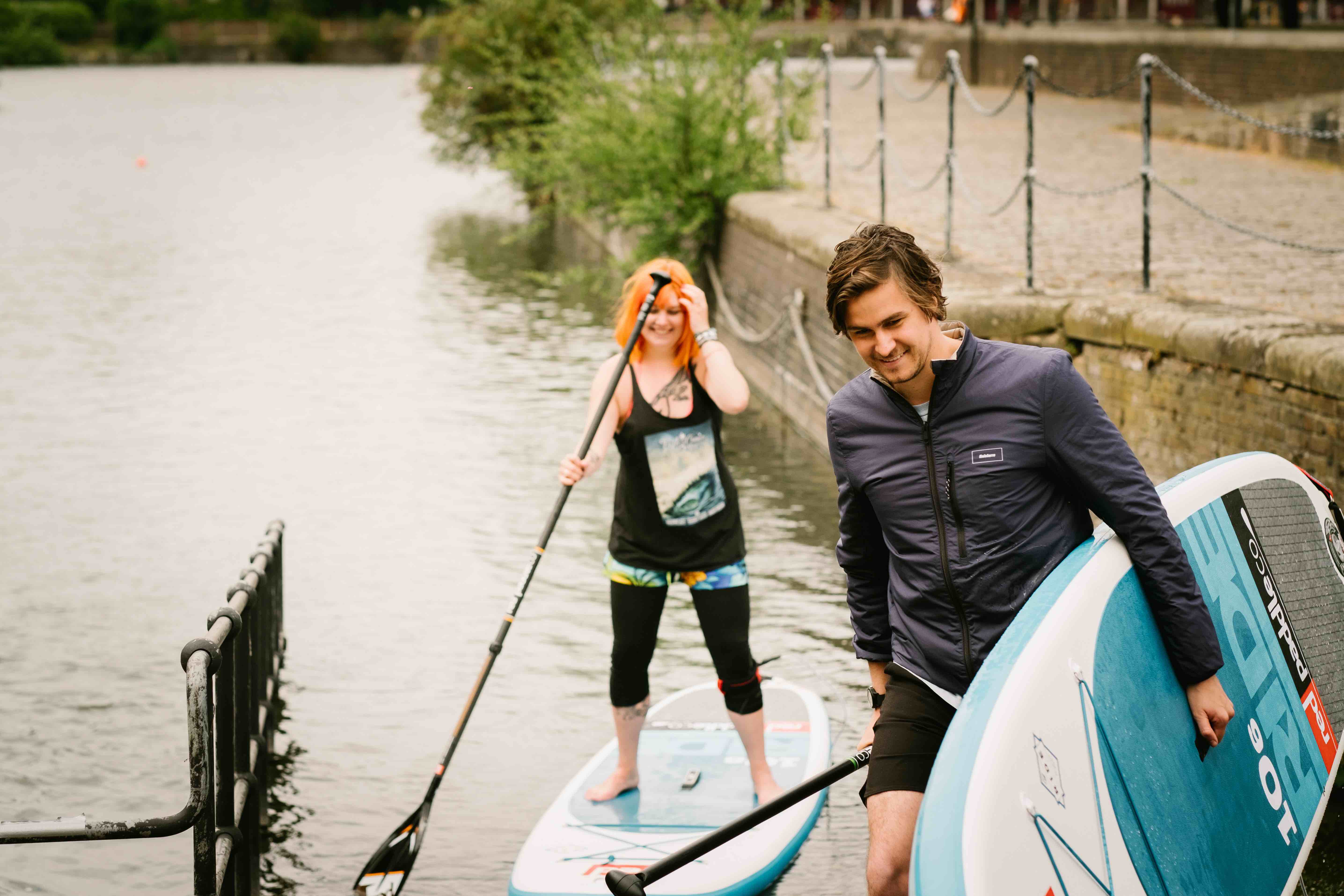 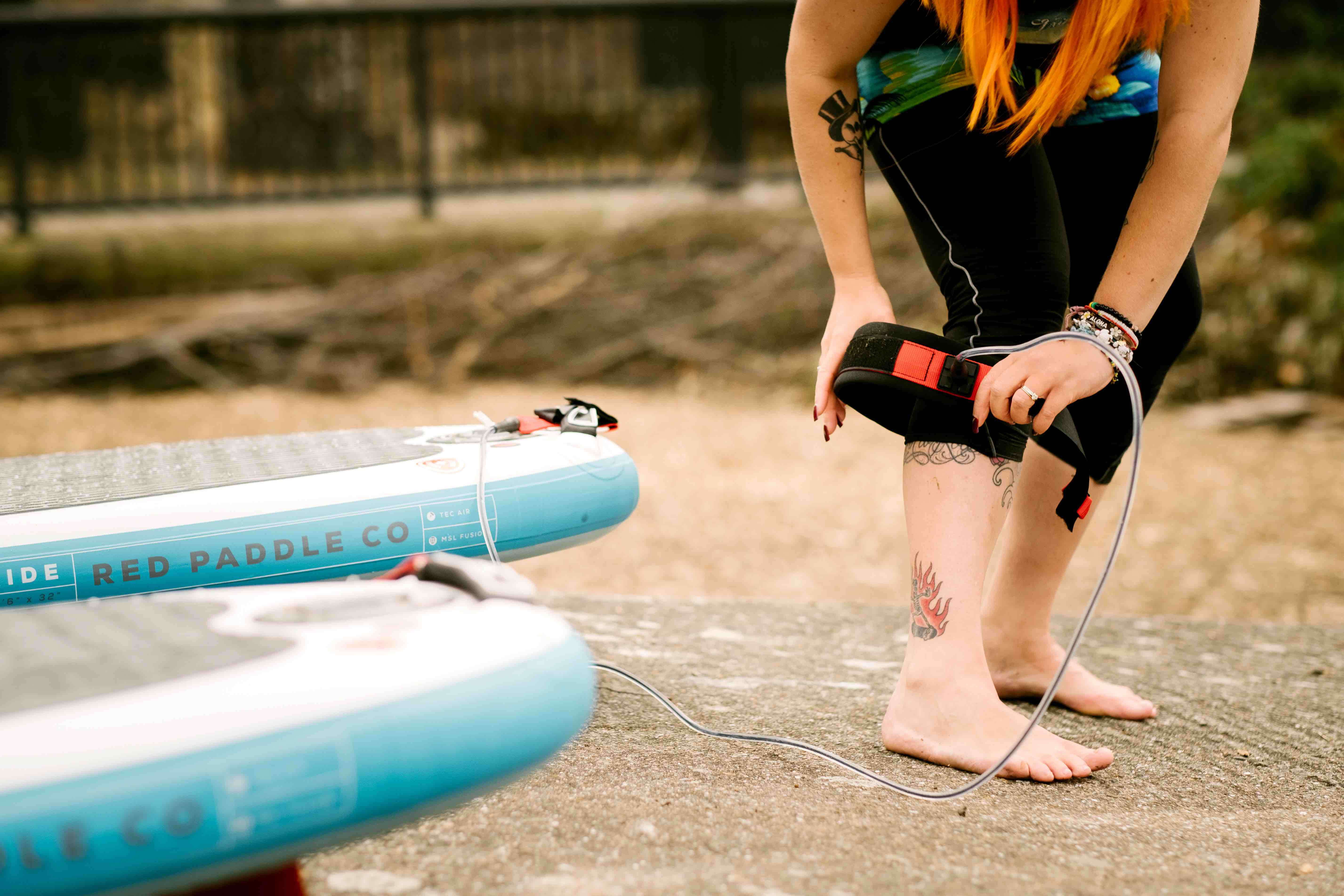 “These inflatable boards are almost becoming a scene in their own right,” says Steph. “Not only can you use them anywhere, you can get them on international flights without being charged an arm and a leg. And even the most reckless baggage handler would be hard-pressed to destroy one.”

For city-dwellers like Ollie and Steph, as well as dyed-in-the-wool wave riders, every trip to the coast can benefit from the inclusion of an inflatable SUP. “If you don’t live at the coast, you have to take your trips to the beach when you get the opportunity,” says Steph.

“That means there might be no swell about, which is why it’s perfect to have one of these inflatables on board. I’ve had so many trips to the coast saved by these things. I’ve discovered tiny little coves at the bottom of inaccessible cliffs; I’ve done two-day coast-hopping camp trips and haven’t seen a soul. If you open your mind with one of these boards, the possibilities are endless.”

Find out more about Red Paddle Co., and enter their competition to win an ocean adventure for two in the Caribbean.

Linkedin
RELATED ARTICLES
OTHER ARTICLES
50 years since its inception, and the campaign calling for recognition that capitalism depends on domestic labour is as pertinent as ever.
Photographer David Hoffman recalls documenting the extreme wealth inequality around Tower Hamlets and Hackney int the 1980s.
Photographer Arthur Grace recalls travelling through the Soviet Bloc and finding ways to evade the surveillance of his work.
Freddie Miller’s new series of photographs investigates who today’s trainspotters are and what drives their unfettered enthusiasm.
Curator Antoine de Beaupré discusses his immense record collection and what it tells us about the intersection of music, photography, art, and commerce.
Photographer Matthew Brookes recalls following a group of young people in Venice Beach living in search of the perfect wave.