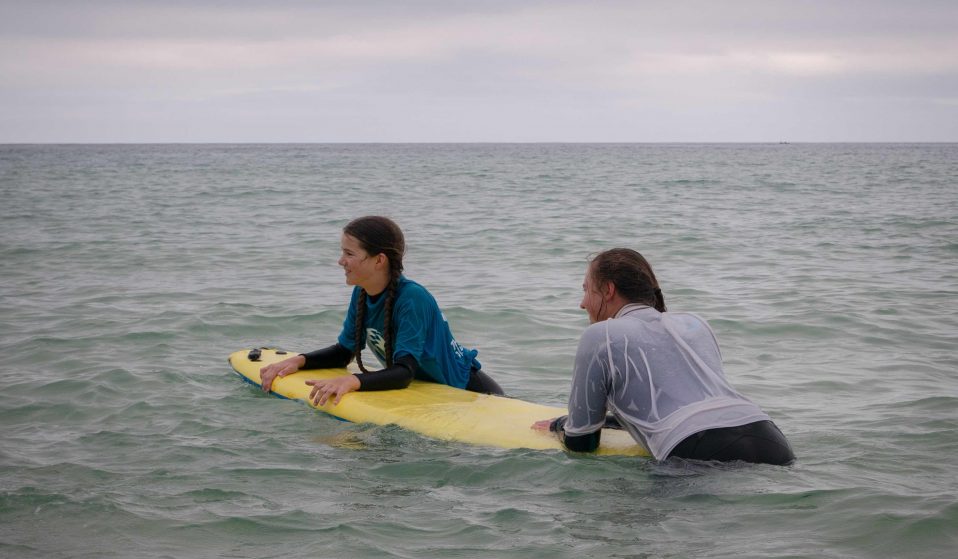 “Once you enter the water, you leave all your baggage and your worries on the shore,” says Katy, Project Coordinator for The Wave Project in West Cornwall. “And for that hour or whatever that you’re in the sea, you don’t think of anything else.”

“We’re trying to reach the young people who need this intervention the most,” explains Katy. “Kids are referred to us by professionals working with them – often a doctor, teacher or social worker – if they’re experiencing very high levels of anxiety and they’re socially isolated.”

“Obviously the more isolated you get, the worse your mental health becomes, so we’re trying to break that cycle by taking away every barrier possible to get them to join in in our surf therapy sessions.”

Given the breadth of the anxiety spectrum, a typical surf session might include people with physical disabilities, learning difficulties, family problems or issues at school with bullying. 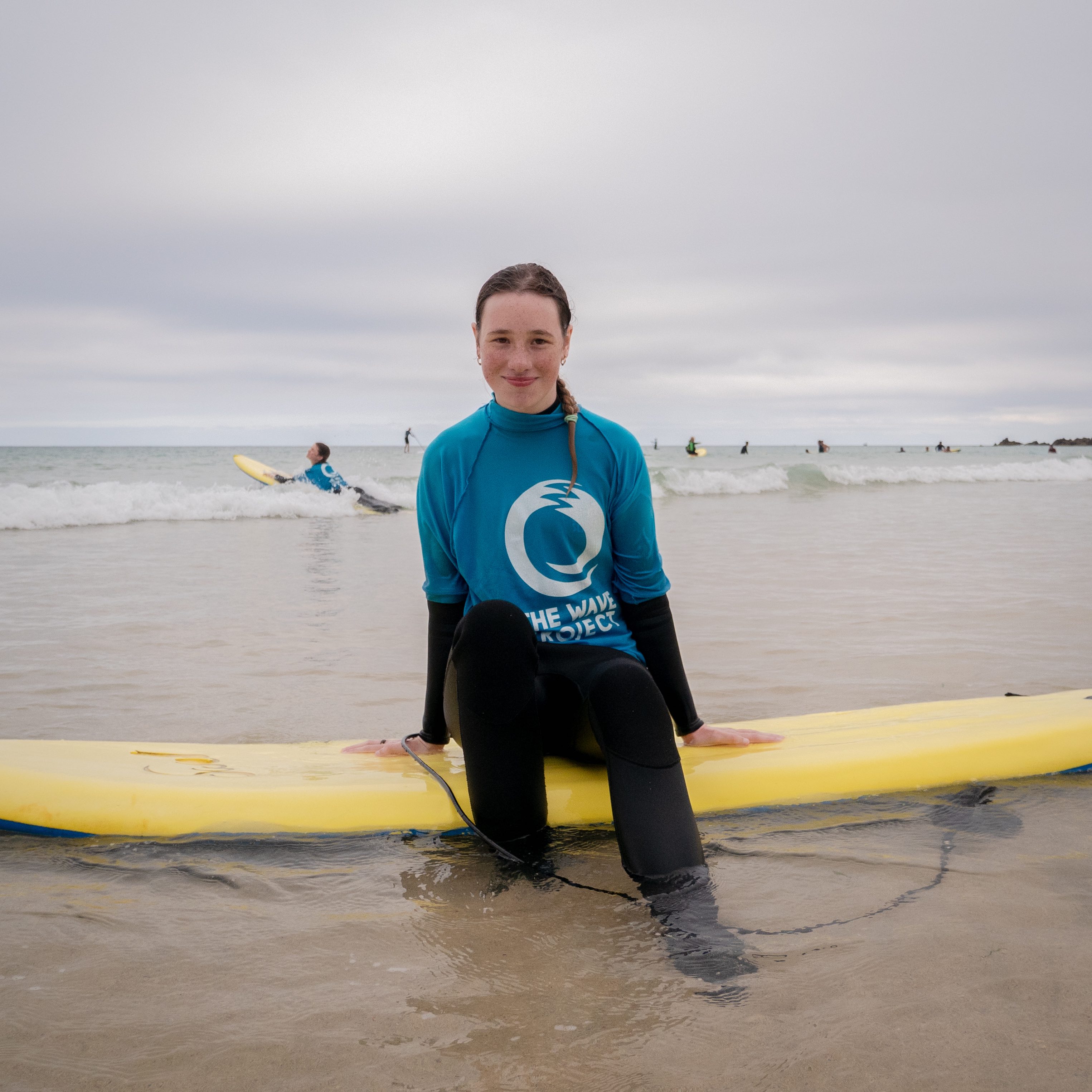 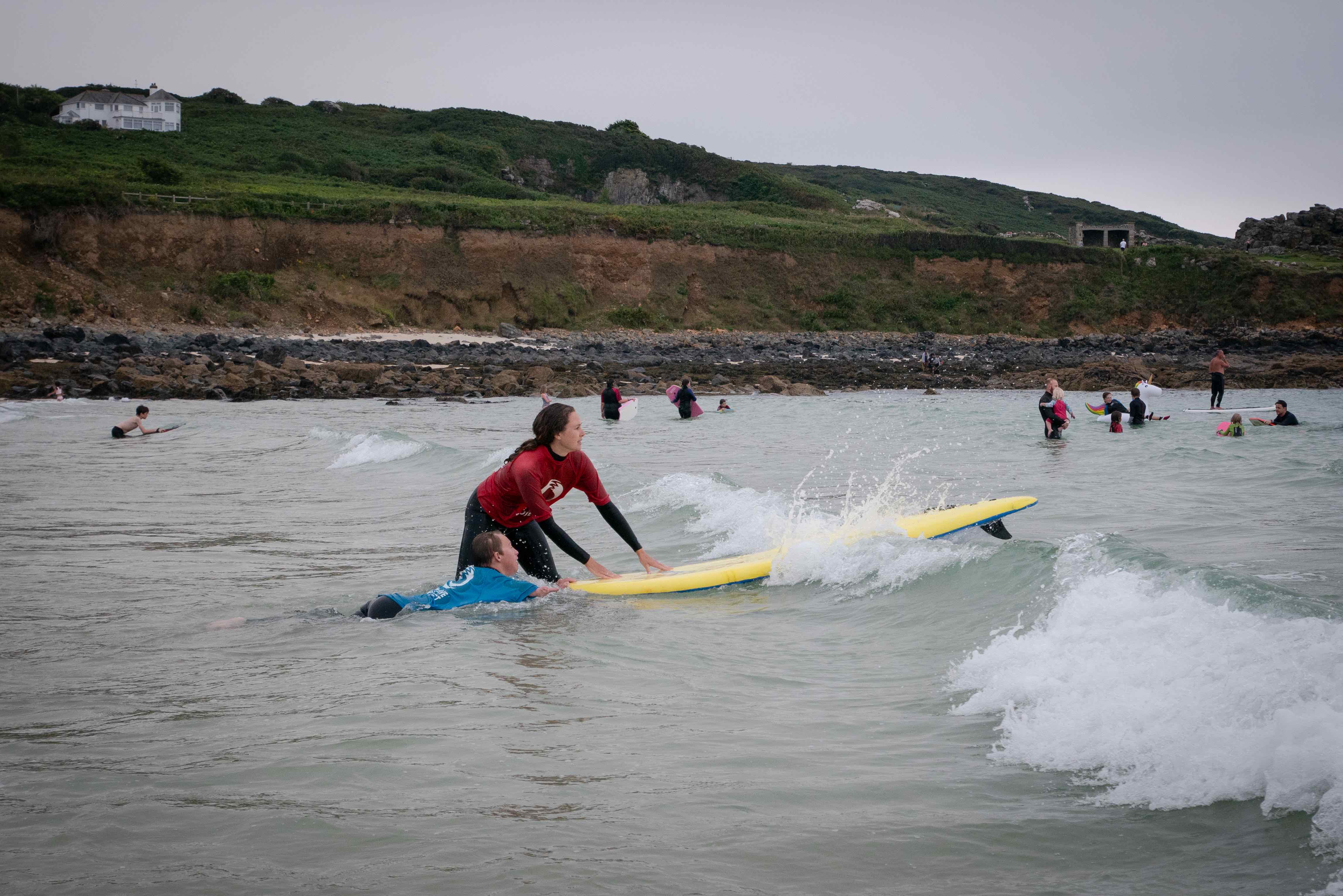 Surf therapy is a relatively new concept, yet the evidence so far shows it is having a positive impact in terms of wellbeing and self-esteem. An NHS-funded pilot of The Wave Project in 2010 – involving a group of 20 young people with mental disorders – revealed that wellbeing increased among the group overall, with participants feeling calmer, less angry and more connected to each other after surfing.

Surf therapy projects are also springing up globally for a range of demographics. Warrior Surf, for instance, works with military veterans in the US to alleviate symptoms of post-traumatic stress disorder (PTSD). Likewise, the Waves for Change program, based in Cape Town, South Africa, operates in communities impacted by violence, poverty and conflict.

“Surfing in particular, helps to build resilience because the nature of learning to surf means you have to fall off a lot and try again,” says Katy. “You take away failure and that helps to actually build resilience, which they can then transfer to other areas of their life.”

Katy also highlights the importance of risk-taking and overcoming fears. “On the first day before you enter the water, your anxiety is through the roof,” she says. “Some of the kids are absolutely terrified and anxious to the point to where they really don’t want to do it, but if you can just get them in the water, I would say that’s where the magic happens.”

Each person at The Wave Project is allocated a one-to-one peer mentor, and encouraged to take things at their own pace. For those who want to continue after the six-week course ends, they can attend Surf Club. But as the scheme doesn’t receive direct funding and relies largely on donations, it costs £5 per session. 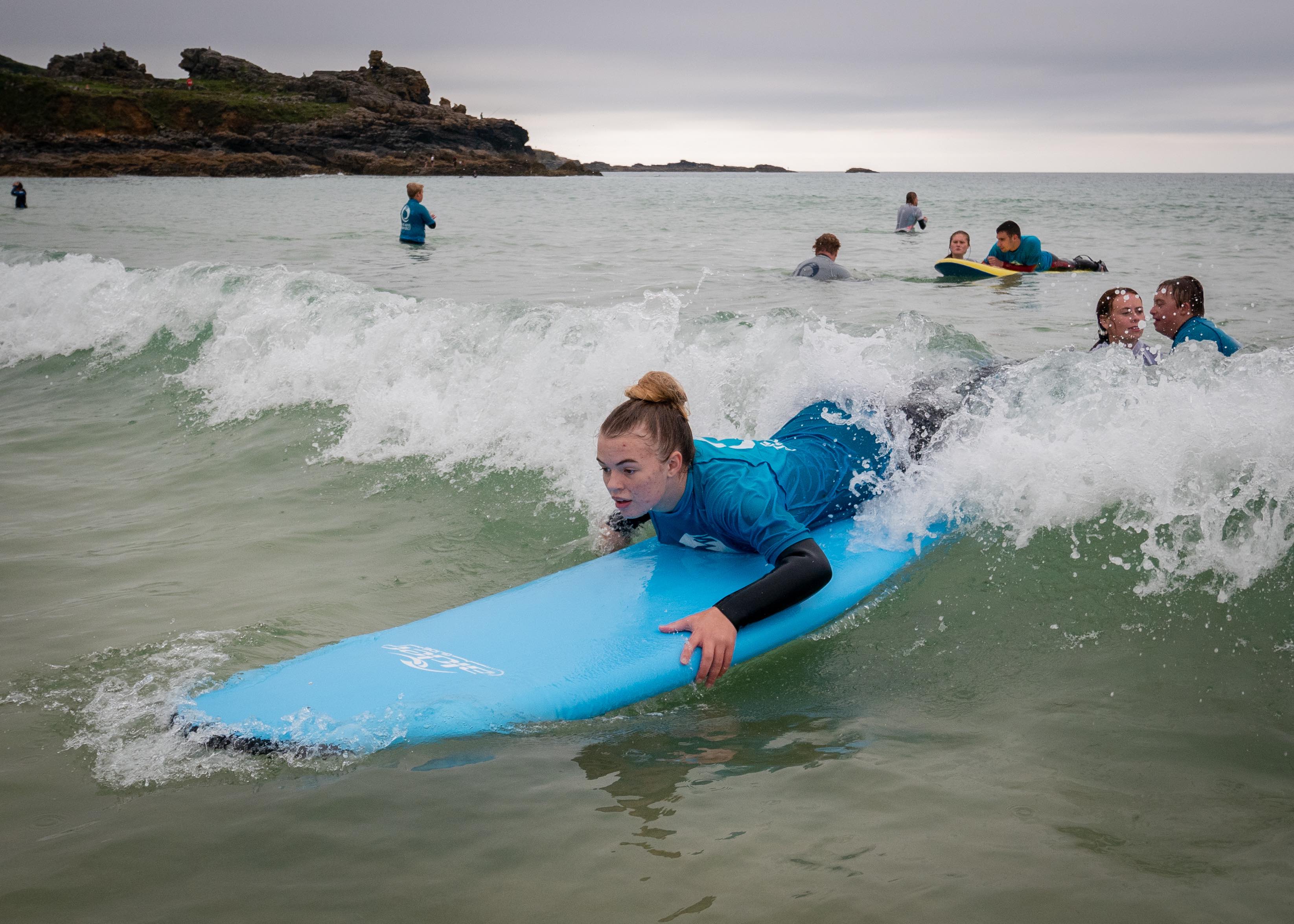 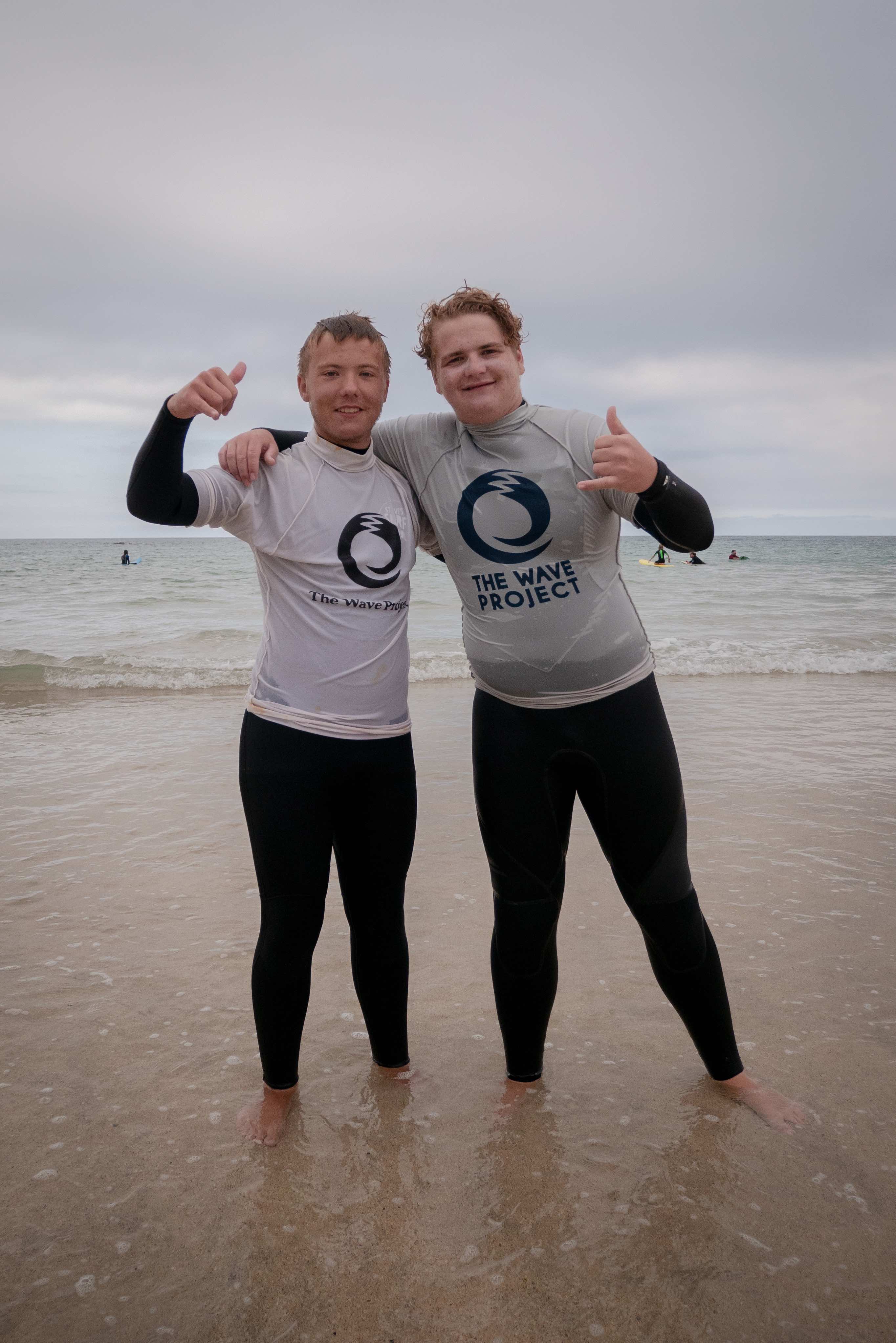 In Cornwall, where the Surf Club has been running for over five years, around 60 per cent of people attending the initial six-week course have gone on to join Surf Club or expressed an interest in doing so, and 10 per cent of those over 14 and able to do so, have become volunteers with The Wave Project.

Lewis, 16, has been volunteering with The Wave Project for two years. “I started off as a student and then since then, I’ve wanted to give back what I had,” he tells me. “Most weekends I’ll come down to St Ives and volunteer. I live in Penzance, so it’s a bit of a trek but it’s really good fun. It’s pushed me to learn new techniques and want to become a surf teacher myself.”

“It’s like a second family,” chimes in Harvey, who’s volunteered since 2017. Although it can be challenging at times, Harvey says he learns more because of it and claims the experience has improved his communication skills.

Like Harvey, Lewis says the group is like family and the beach his second home. For him, being able to help people overcome fears is an especially rewarding factor of volunteering: “Some people might be scared of sand or the sea, or putting on a wet suit, but you just gradually build their confidence around it and by the end of the six weeks they’re loving it, loving life.”

“It’s just being in the sea,” he adds, finally. “There’s something about it, isn’t there?” 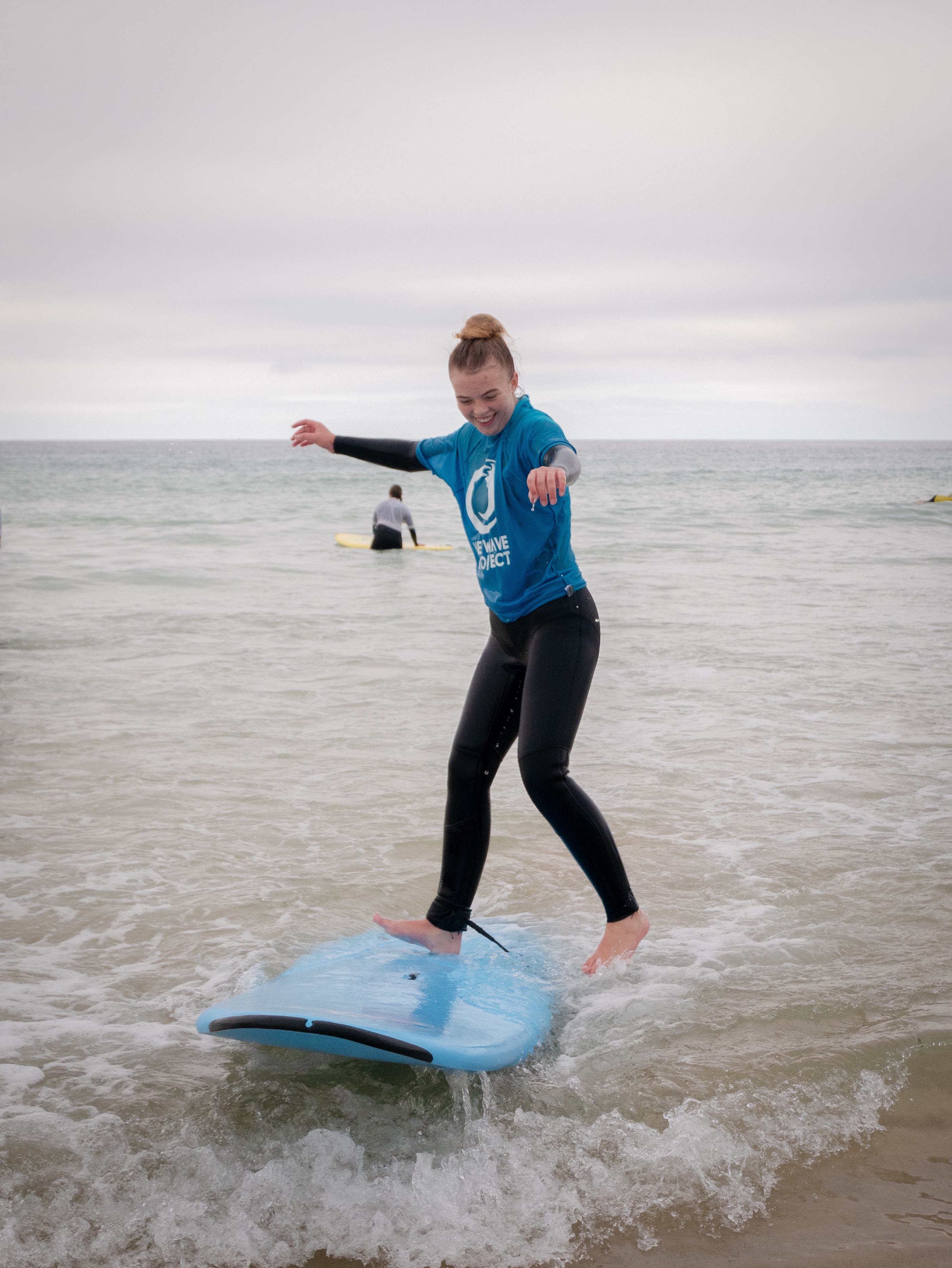 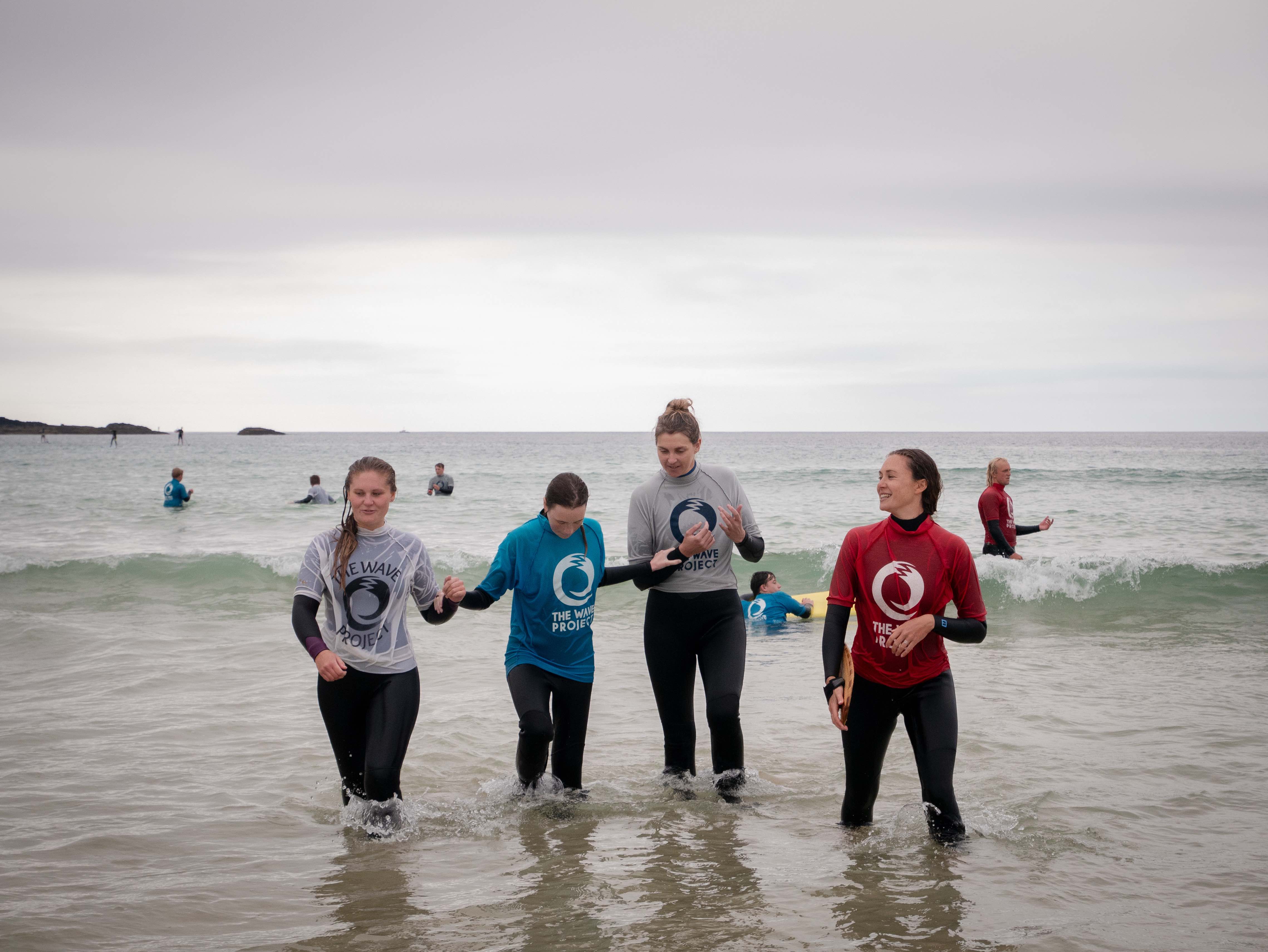 Learn more about The Wave Project on its official website.

Linkedin
RELATED ARTICLES
OTHER ARTICLES
In her new book, the author explores the country’s housing crisis in human terms and calls for radical action to address a broken system.
On the fifth anniversary of the tower fire, around 18,000 joined the walk to remember the 72 dead and to demand justice.
For decades, an area of East London has served as a community hub for Vietnamese people looking for a taste of home.
The last few years have seen an increase in LGBTQ-led initiatives to feed the hungry, with many finding ways to stay afloat despite the challenges.
Photographer David Hoffman recalls documenting the extreme wealth inequality around Tower Hamlets and Hackney int the 1980s.
Freddie Miller’s new series of photographs investigates who today’s trainspotters are and what drives their unfettered enthusiasm.