Outdoor / What it means to be 15 and female, anywhere… 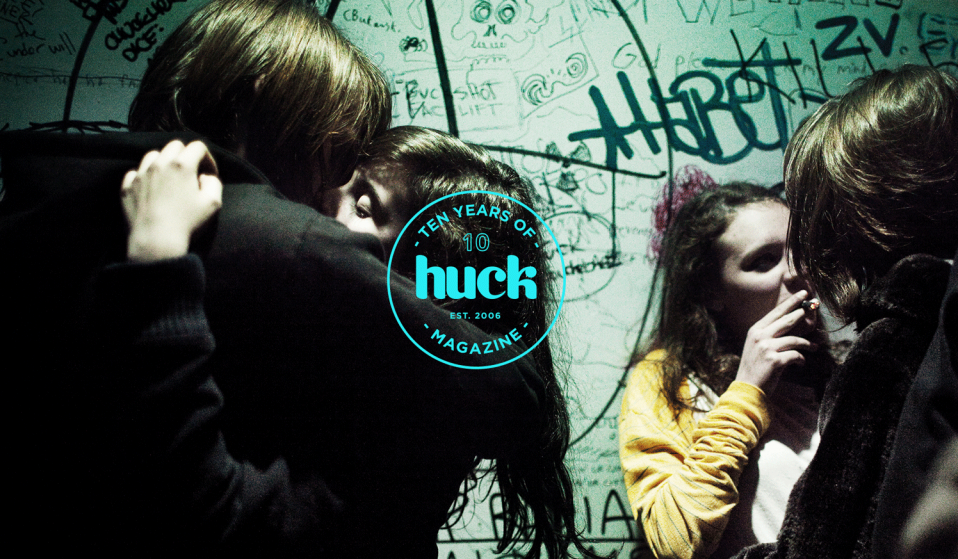 Coming of age is a tricky business, whether you’re born in Brooklyn or the Middle East. But as photographer Ilana Panich-Linsman shows, some strands of adolescence stay the same no matter where you are.

Coming of age is a tricky business, whether you’re born in Brooklyn or the Middle East. But as photographer Ilana Panich-Linsman shows, some strands of adolescence stay the same no matter where you are.

Adolescence, with all its chemical shifts, is universal. Yet its manifestations differ according to context.

I photographed 15-year-old girls from Brooklyn, New York, because I was curious about this moment when the push and pull of childhood and adulthood can be equally strong.

It’s when a girl begins to define herself as a woman. I became curious about cultural differences in this age group, so I followed the idea from Brooklyn to Palestinian refugee camps in Lebanon and Jordan.

While it may seem like an obvious comparison, I’ve never seen the two sets of photographs juxtaposed as they are before you here.

These images have ceased functioning as interplay between my eye, my subjects and myself; they’ve become a dialogue revealing religious, political, social and cultural differences and similarities between two small corners of female teenage culture.

Each pairing of images has been matched with a song, which you can listen to as a mix on Spotify. 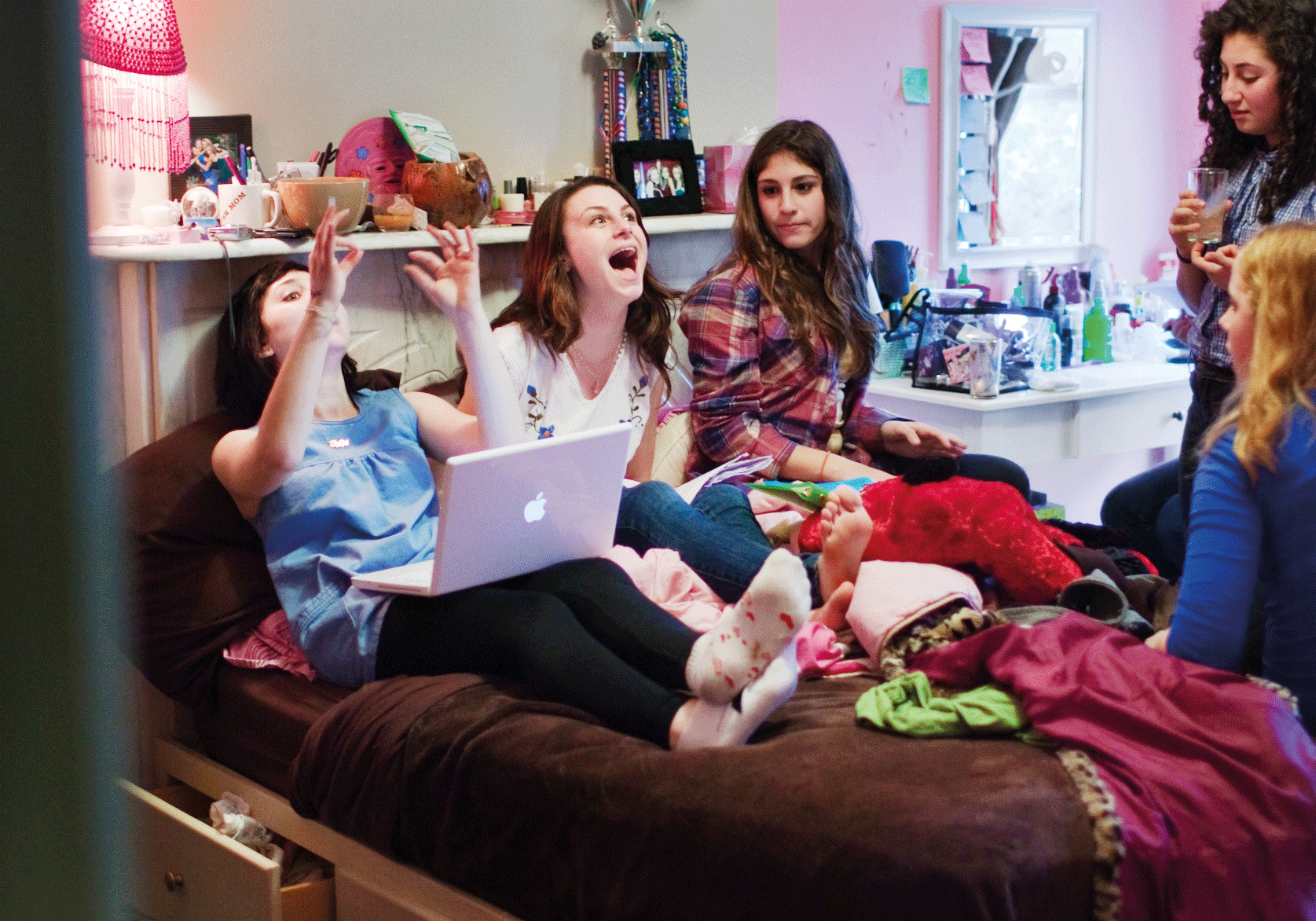 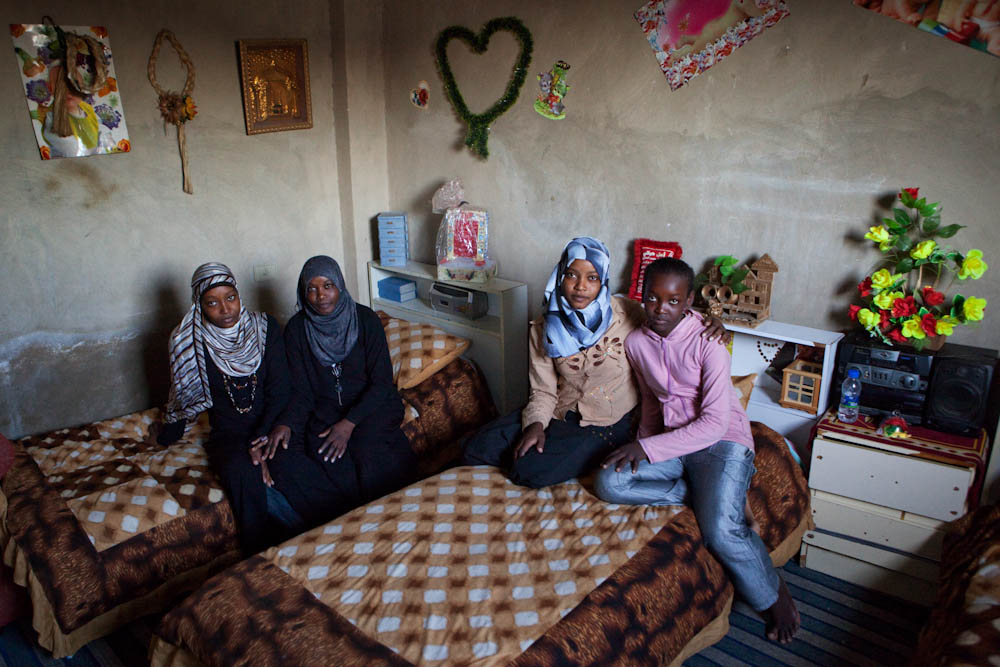 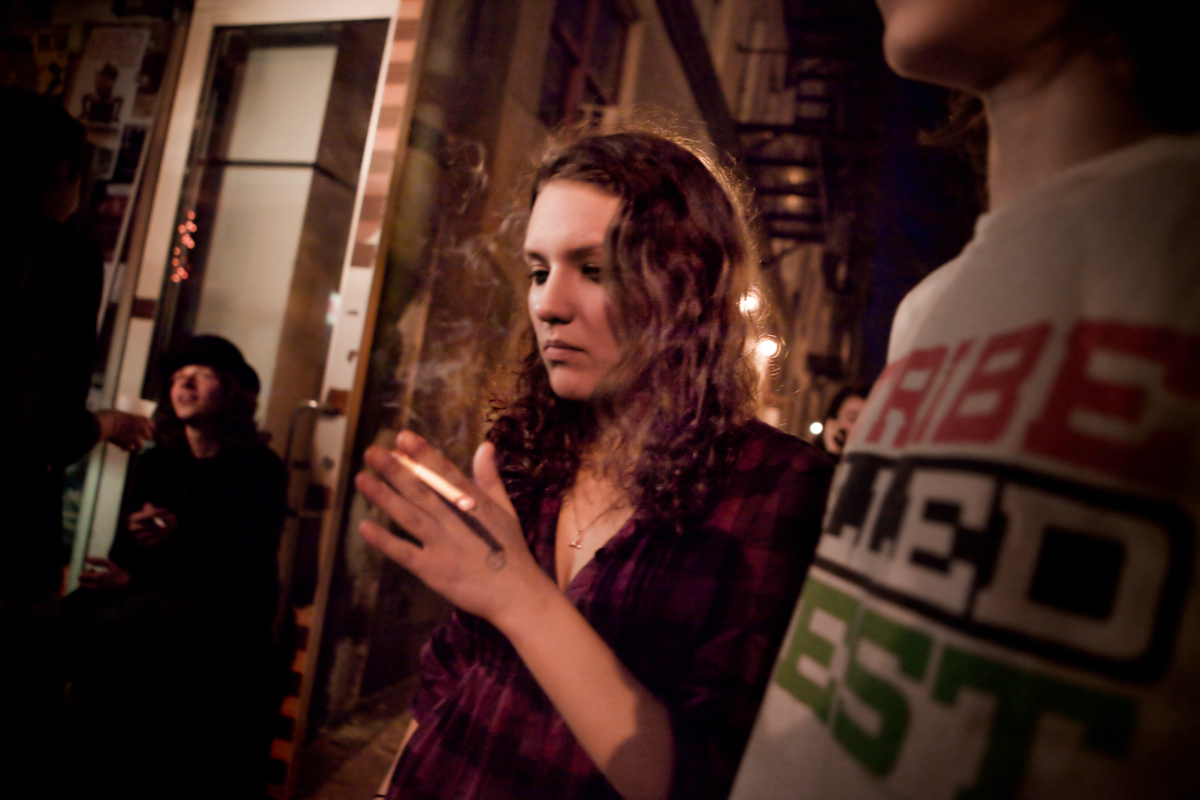 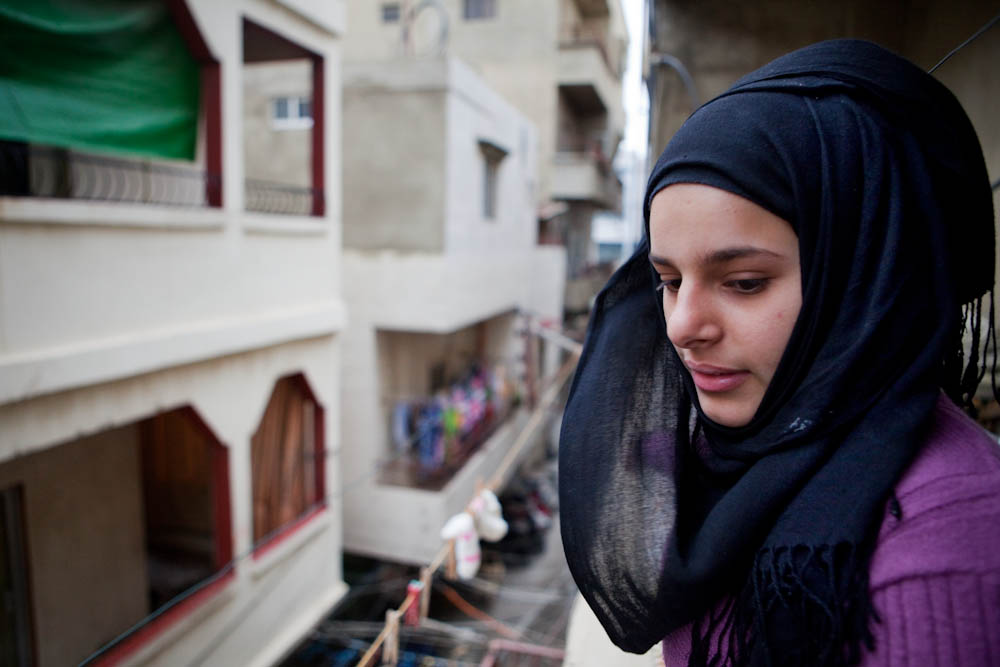 Paul Simon – Me and Julio Down by the Schoolyard 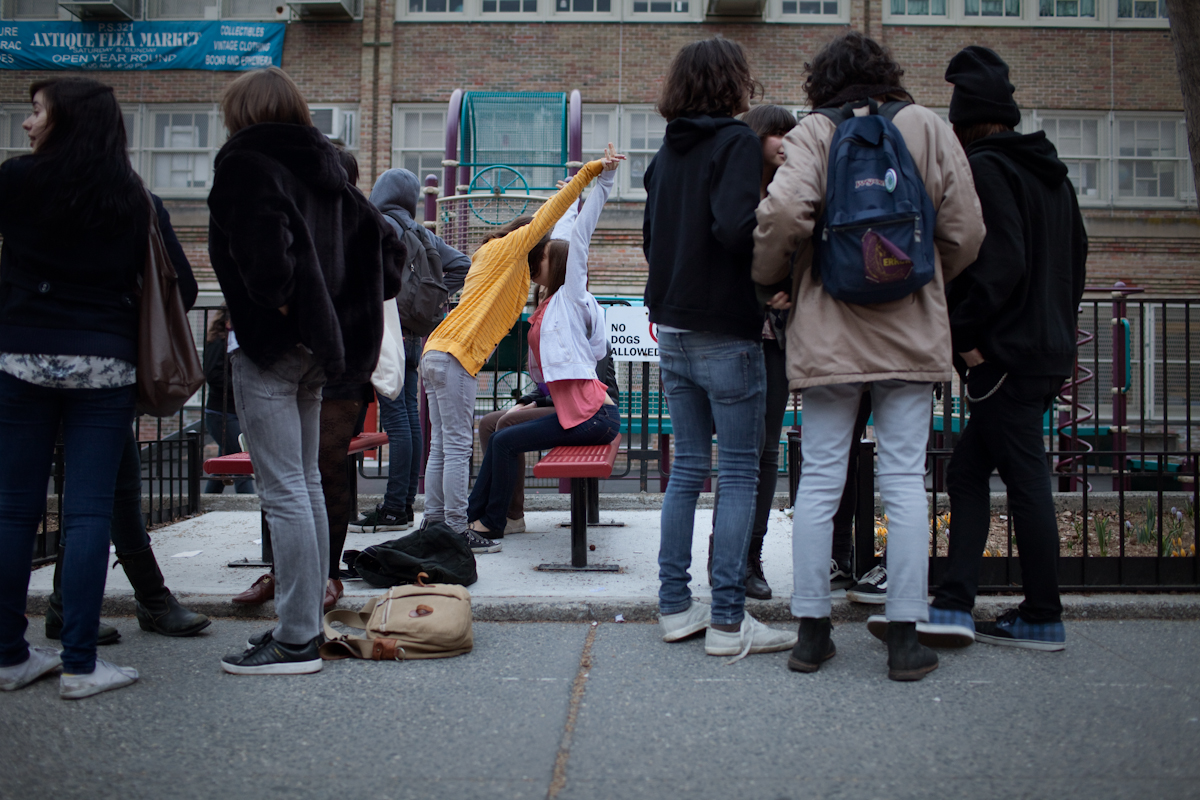 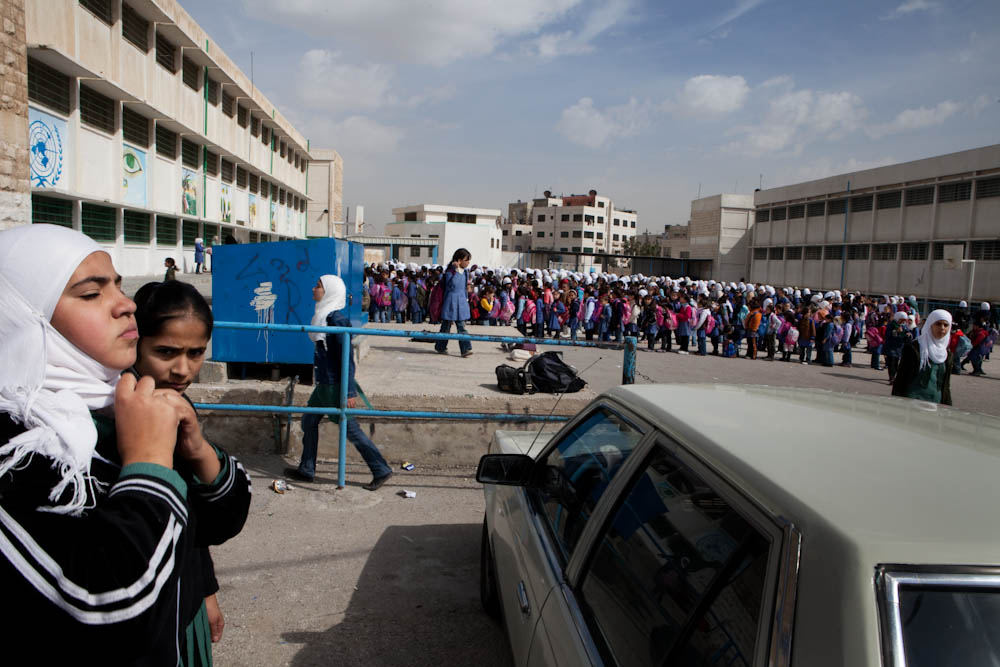 Top:Hannah (15) and Libby (15) embrace in front of their former elementary school in Park Slope, Brooklyn.

Bottom: A young girl adjusts her hijab outside an elementary school run by the United Nations Relief and Works Agency (UNRWA). 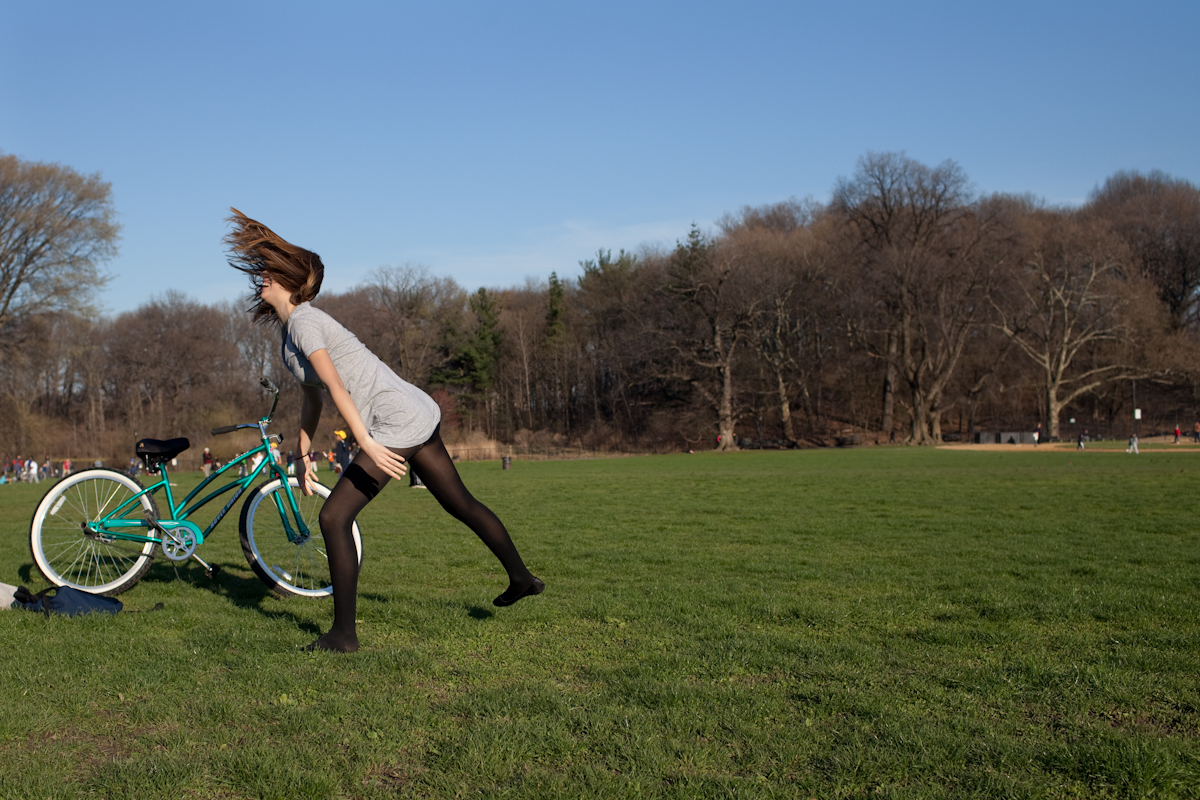 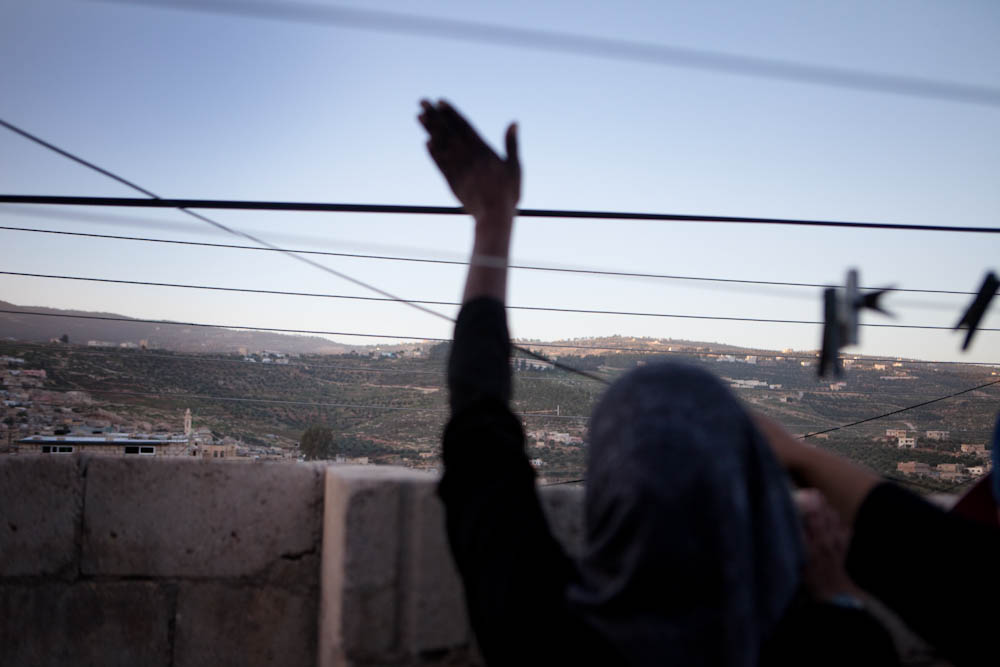 Top: Libby performs a cartwheel in Prospect Park, Brooklyn, where she and her friends often hang out.

Bottom: A teenager waves over a wall at Jerash Camp. 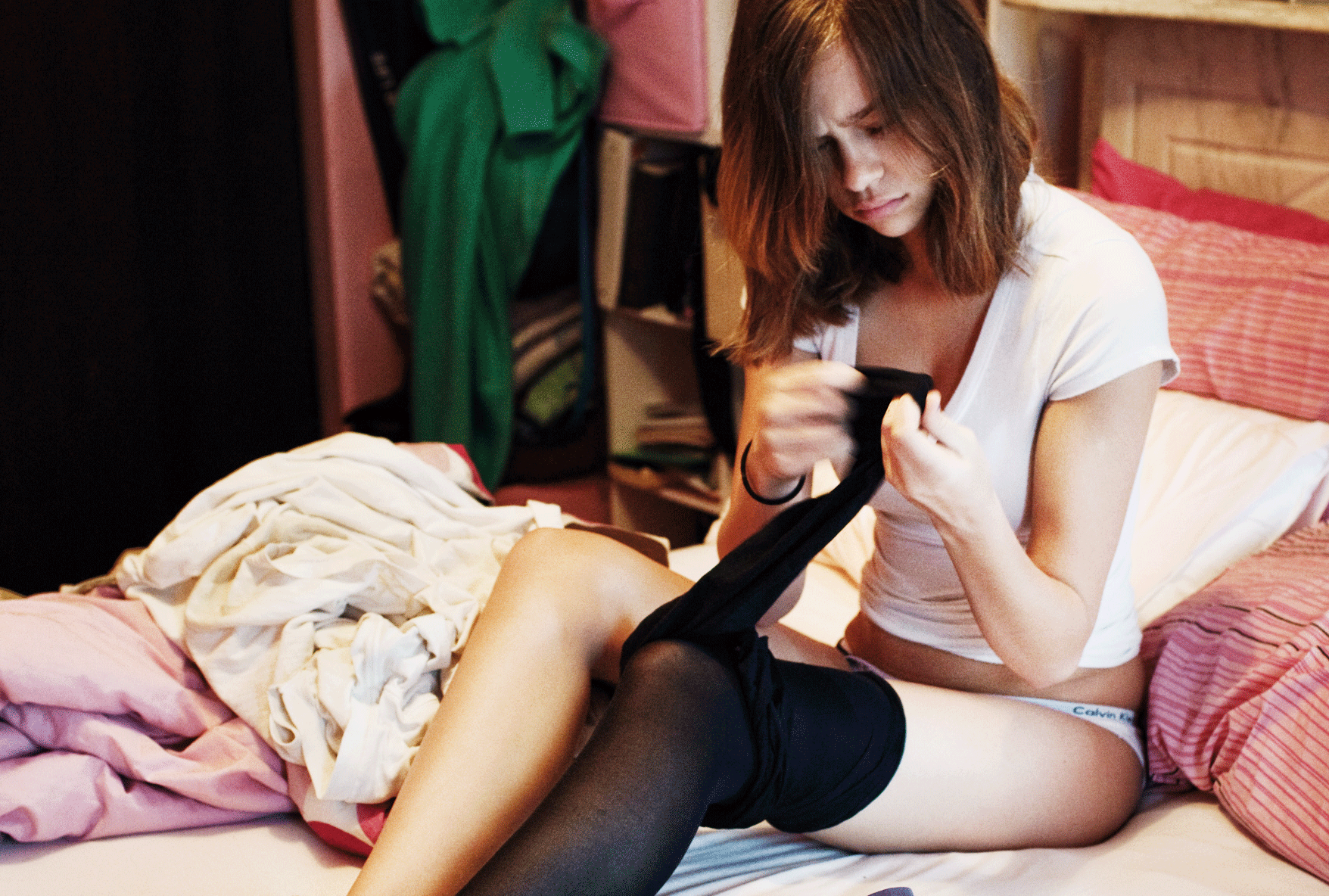 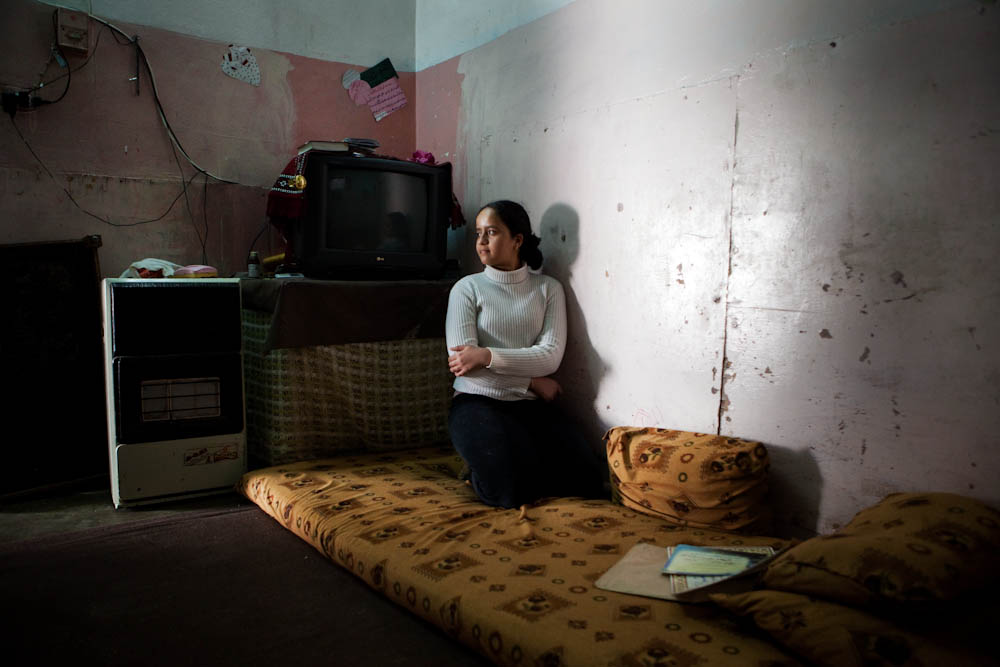 Top: Libby dresses for school. She attends a rigorous high school in Park Slope and plans to go to college.

Bottom: Shahanez (13) was born in Gaza Camp. Her family came from Ramla in Palestine.

Shahanaz loves school and hopes to become a doctor, but will not be able to do so unless her legal status as a refugee changes, thereby affording her the same rights as local citizens.

Beastie Boys – Fight For Your Right (To Party) 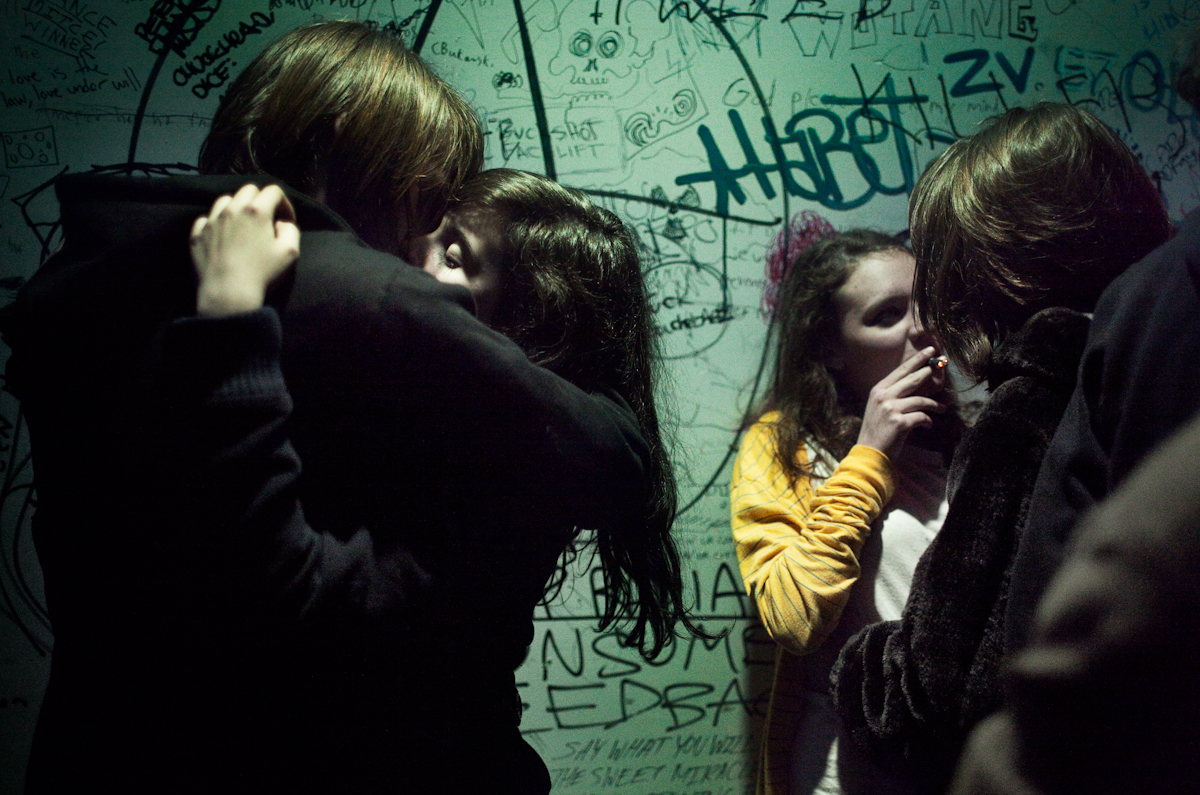 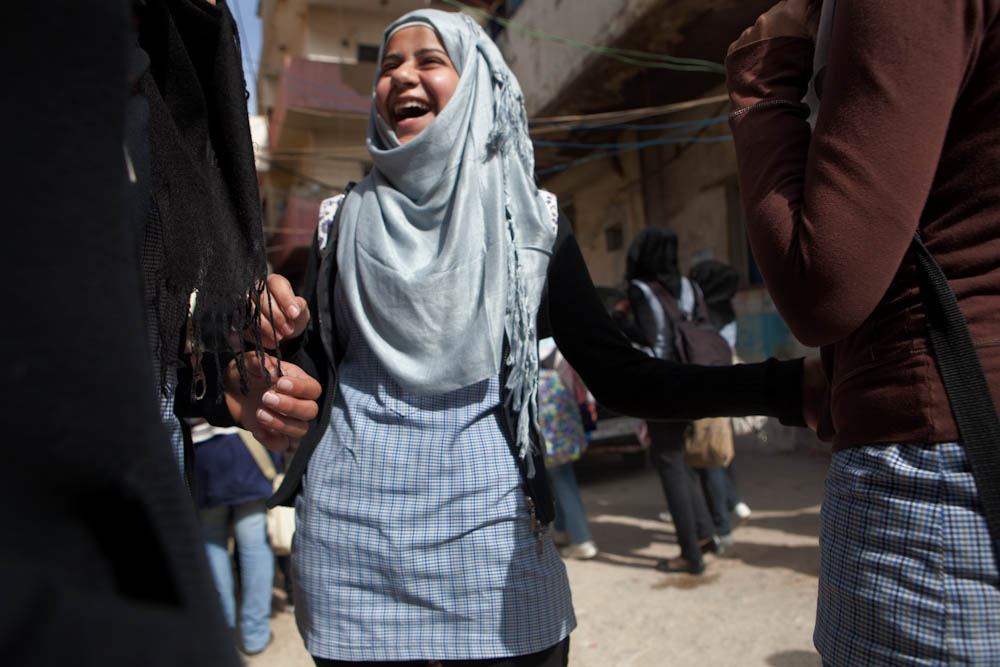 Top: Hannah smoking at a party with her boyfriend.

Bottom: A girl laughs with friends. Young Muslim women in the camps rarely spend time with boys from outside their own families.

Deftones – Be Quiet and Drive (Far Away) 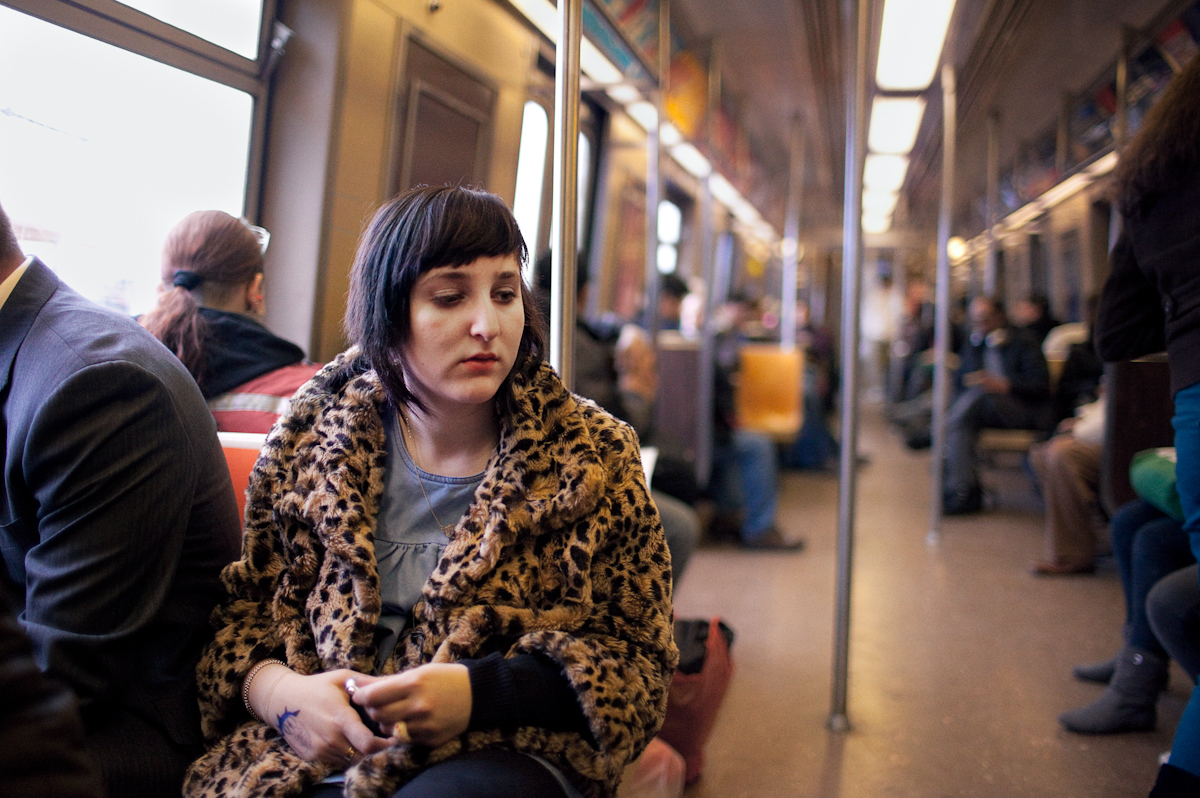 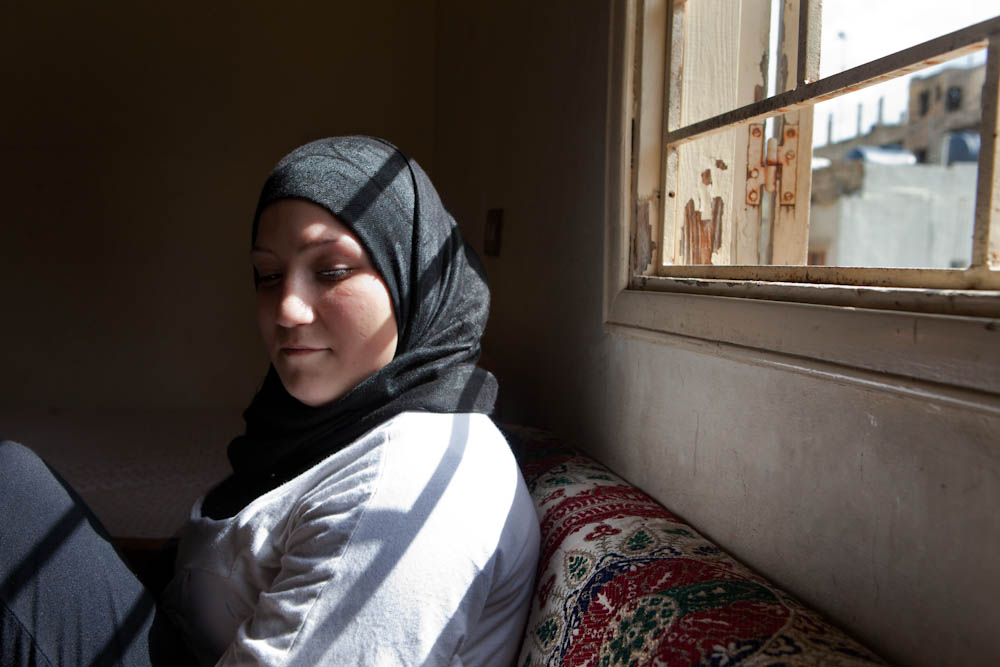 Top:Katie (15) rides the subway home from school every day, alone or with friends.

Bottom: Mona Mhmad Al Masri (15) at her home in Burj El-Barajneh camp in the outskirts of Beirut, Lebanon.

Against Me! – Pretty Girls (The Mover) 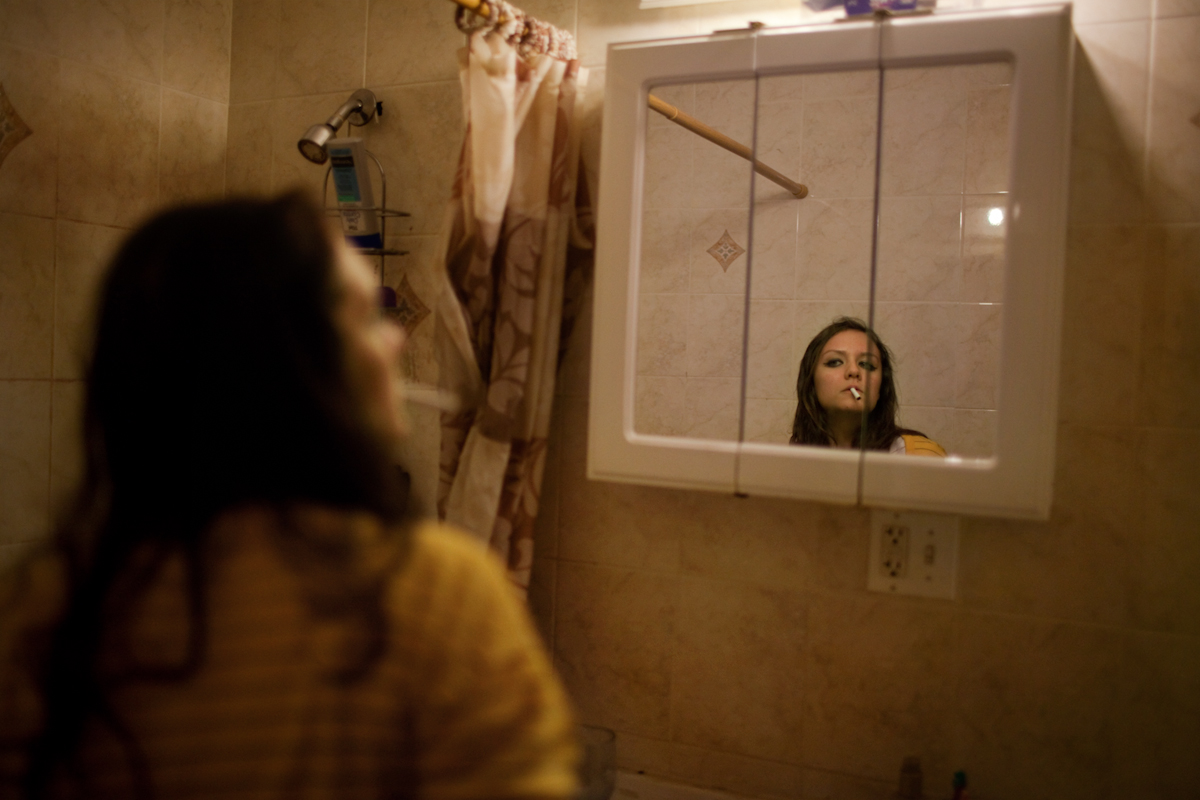 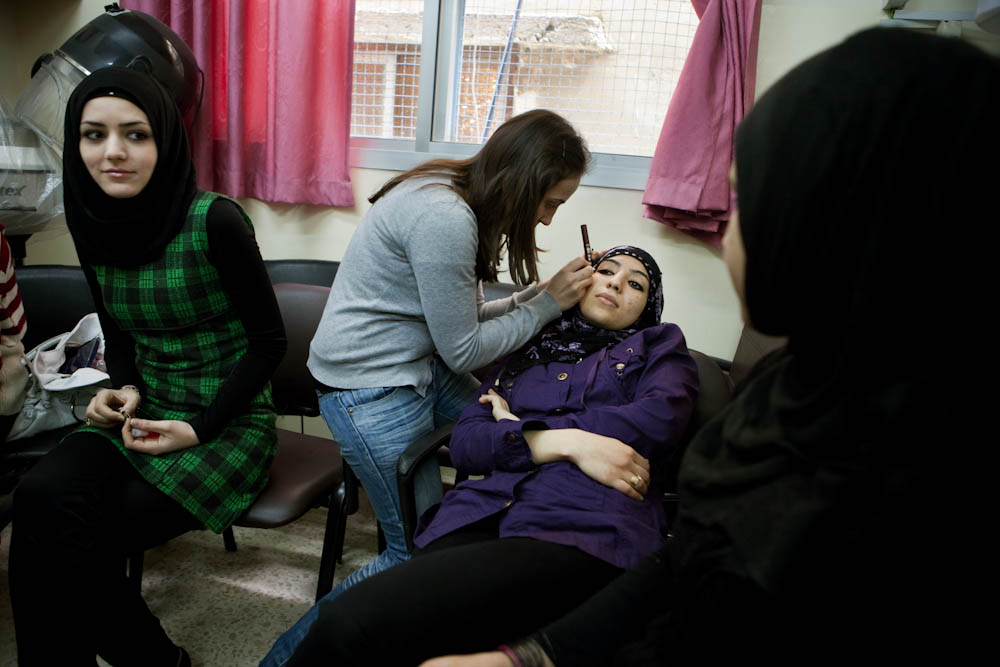 Top: Hannah checks herself in the mirror at a party.

Bottom: Saher Taweh (21), Ruba (20) and Kamar Wakad (18) chat with Wafaa Zeid (17) while they take turns applying makeup to one another during a beauty class held by UNRWA in Beddowi Camp, Tripoli, Lebanon. 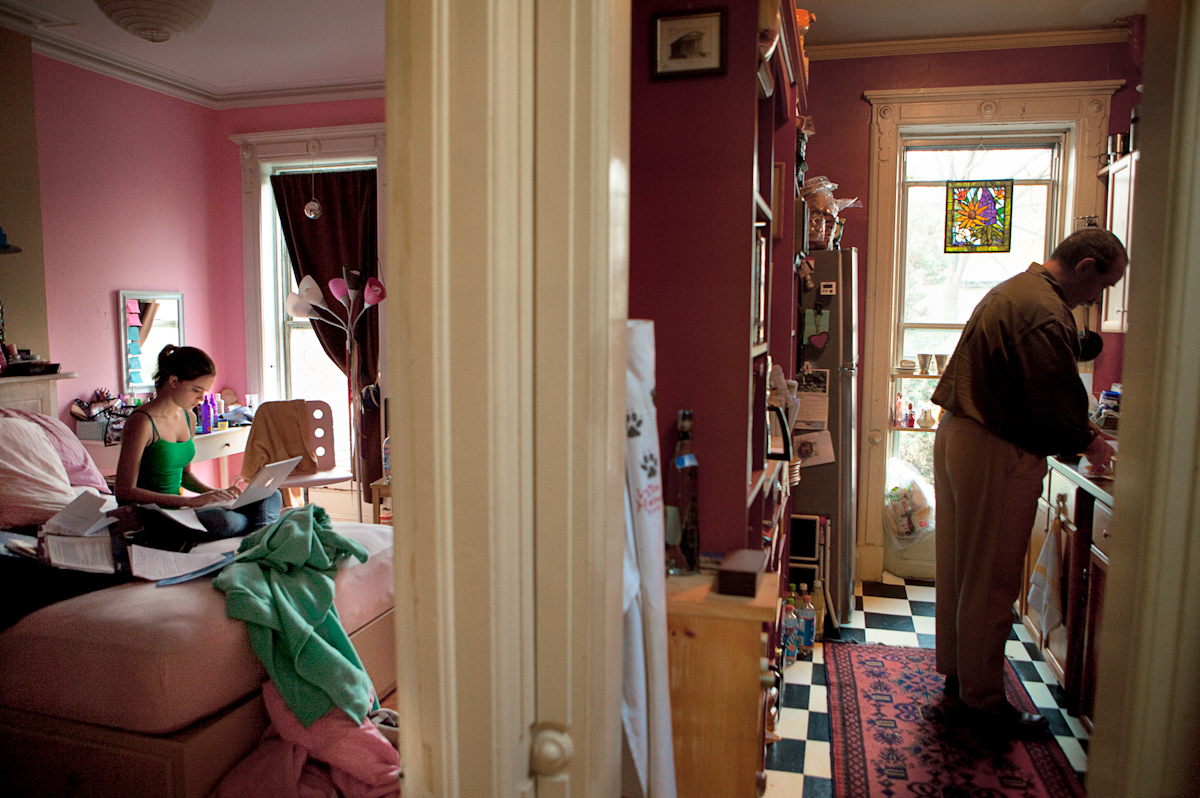 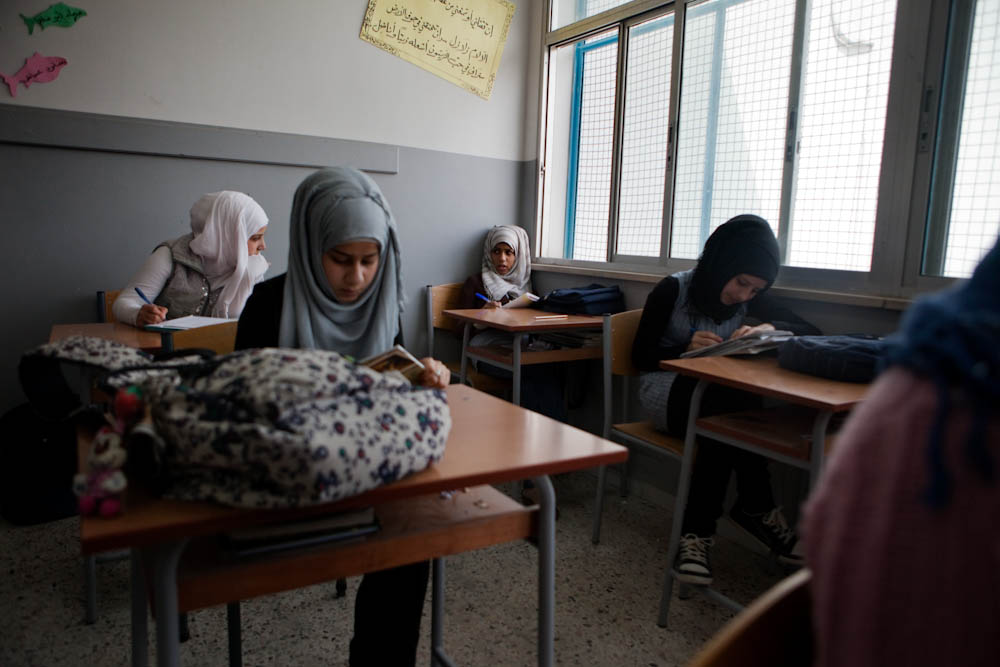 Find out more about Ilana Panich-Linsman’s Fifteen project or listen to the above mix on Spotify.

Linkedin
RELATED ARTICLES
OTHER ARTICLES
Photographer Bud Glick recounts documenting everyday life in the area, and what it taught him about the Chinese immigrant experience.
A new series of photos by Johny Pitts shines a light on communities and subcultures that have all too often been overlooked.
After rewriting the indie rulebook with her devastating songs about romantic longing, the singer-songwriter is now imagining a future in which the artist is no longer a product.
Students are being left to languish in unsafe housing, in some cases leading to serious health complications.
With the virus now a global health emergency, we must take steps to fight misinformation and demand a swift UK-wide vaccine roll out, writes Phil Samba.
One year on from the fall of Afghanistan to the Taliban, Tiara Ataii speaks to those who have been forced to make the treacherous journey to Europe for safety, and the barriers and horrors they have faced.