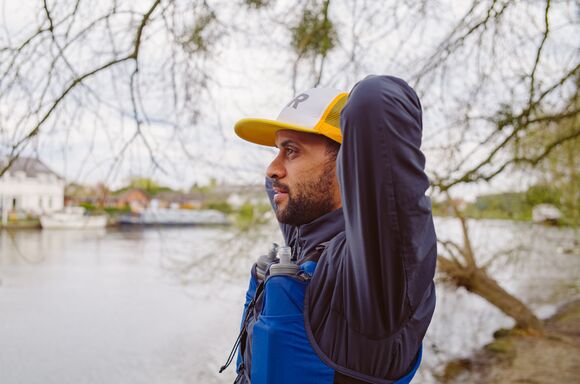 Exploring what it means to be Black runner in Britain today, ‘Run to the Source’ tells a tale of struggle and endurance.

Exploring what it means to be Black runner in Britain today, ‘Run to the Source’ tells a tale of struggle and endurance. Director Matt Kay explains why it’s such an important story.

When he first started ultra running, Martin Johson – or MJ – was often the only Black runner on the start line. Covering almost superhuman distances, ultramarathons span any length longer than a marathon’s 26.2 miles. MJ has been working to bring greater representation to the sport, and helped formed the group Black Trail Runners in the wake of George Floyd’s murder by police in 2020.

In Run to the Source, filmmaker Matt Kay follows MJ as he attempts a feat of extreme human endurance. The challenge is to run the 184 miles from the mouth of the Thames in London to the source in Oxford, all while beating the fastest known time (FKT) of 40 hours and 47 minutes.

Setting off on the first anniversary of George Floyd’s murder, MJ is running for, in Kay’s words, “something greater” than his own personal achievement. Kay’s documentary speaks to this: splicing archival footage alongside MJ’s run, he seeks to rewrite the narrative of Black people in Britain and explore the lack of representation in the country’s rural spaces.

In the film, Kay – who knew very little about ultra running before starting work on the film – tells the “hidden histories” of the Thames colonial past, using the river to thread different stories together. As we follow MJ on his journey to the source, a three-part poem from Safia Sinclair, narrated by Adjoah Andoh, talks of the people that came to Britain on the tide of the river – from slaves to the Windrush generation.

Run To The Source also provides a portrait of MJ the man. His family come into his training practice: we see him pushing his son Ned in a pram while running along the Thames path. During his journey from the heart of London into the Oxford countryside, we see not only the brutality but also the human struggle, as he completes his challenge – spectacularly – in under two days.

When Patagonia approached you to make this film, why did you say yes?

I knew very little about ultra running or trail running beforehand, but associated a marathon as being a really long distance – let alone these runs of 50 miles, 100 Miles, or in MJ’s case, 184 miles. So it was a combination of this amazing feat that he was trying to accomplish, but then also trying to shed light on an issue that I also try to shed light on within my work.

What were your main influences making the film?

When I first started making it, I thought of the film like Free Solo meets I Am Not Your Negro. Free Solo is another amazing feat – climbing without any harnesses, so very dangerous. I Am Not Your Negro is a film about James Baldwin which also uses archival footage in a very interesting way. I was trying to make an amalgamation of those two films, to capture this amazing, inspiring feat, but also incorporate the greater context that people often don’t think about.

One of your inspirations for Run To The Source were the photographs of Ingrid Pollard. What was it about them specifically?

Ingrid Pollard took these Black people into the countryside to photograph because all the photographs she’d seen of people in the countryside were white, and she wanted to switch that narrative. They were done in the ’80s, and what MJ is trying to do 40 years on is very similar. Lots of the archival that I use in the film – some of the protest footage you see of Brixton riots, or after the New Cross Buyers, or Margaret Thatcher talking about people being afraid of this rush of immigrants coming – it’s often the same rhetoric and the same pictures that you see now.

Unfortunately, lots of this history is cyclical. Ingrid’s work speaks to a lack of diversity in the countryside and tries to shift that narrative, as MJ’s work speaks to that. They seem to me parallel journeys and I thought those photos could be the epitome of what the film is about. 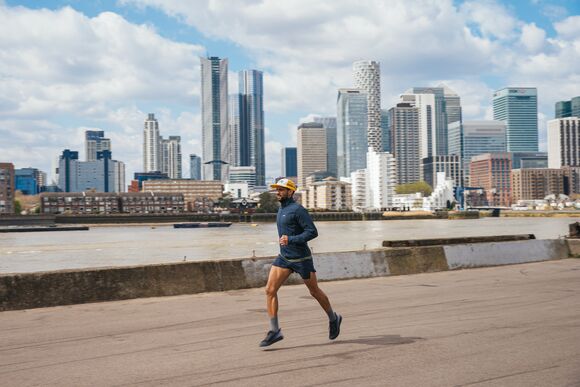 Representation in sport is something you’ve explored in your previous work – why is this important to you?

Sport crosses many borders and boundaries, both culturally and through language and class – it’s a great leveler. Film is also a great leveler, most people can sit down and watch a film. Within sports there are often subcultures and subgroups that emerge, whether that’s to do with access, or to do with financial restrictions, but I feel that people that try and bypass those restrictions and barriers are interesting.

I’m inspired by trailblazers and pioneers. I feel the people that are leading the way for a different social group, or different gender, or different race, are very brave. I like to shed light on that. But also from a personal perspective, I like to meet those people and see what inspires them and what their motivations are.

The film talks about how there aren’t very many Back trail runners. Why is that? Why is the work of the Black Trail Runners so important?

Loads of Black people run, up to marathon distance. But then it drops off in popularity considerably after marathon length. It changes to become predominantly male, white and quite middle-class. I think lots of Black people often feel a reassured safeness in urban areas and are less likely to explore rural areas and the outdoors. Obviously, trail running is inherently in these rural spaces, so there’s a juxtaposition within that.

But Black Trail Runners are trying to bridge that gap and create safe spaces and encourage diversity in the outdoors. It’s ultimately something that people, when they do feel safer and reassured, they can be encouraged by other people doing it. Hopefully that will start a snowball effect. It’s tricky to be what you can’t see, so hopefully, people like MJ and Black Trail Runners are providing the blueprint for Black people that want to get outdoors and explore. 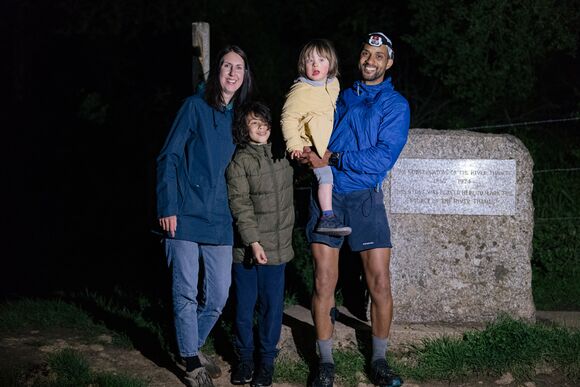 Why does MJ’s story lend itself so well to the anti-colonial retelling of the river’s history?

The Thames, as a river, is integral to London – it’s very iconic. People often think about, say, EastEnders or they may think about the docks, but they wouldn’t necessarily connect the Thames to slavery and colonialism, and the fact that many of the ships coming from the Caribbean with sugar and spices also came with slaves.

America is often seen as the country with slavery, and Britain has always tried to distance itself from that, which is not true. So I tried to bridge that connection to make it part of the history which is often unexplored. MJ is also exploring new roots by running down there because 100 years before he may not have even been to run as a Black man down the whole pathway. It’s interesting to explore this route that he’s doing and this challenge that he’s taking on, which isn’t something that should be taken for granted.

MJ talks about the Thames’ different personalities. Was there a particular personality you wanted to show?

I’ve got a new appreciation for the Thames since doing the film and seeing it in different forms. It changes a lot in terms of the affluence of the area, and the power of the river. It’s got many faces that vary in wealth and in force, and in age.

Why did you choose the poem for the narration?

It’s an amazing poem by a woman called Safia Sinclair who’s a young Jamaican poet, and she’s based in America now. With it being a British story, I thought [the link between Jamaica, the UK and US] was connected to the triangular slave trade. Her poem gives a different perspective to Britain, from within it, but also from outside it. Poetry can be very illustrative and emotive without being declarative and telling facts. I wanted to stray away from telling people what to think, but more towards giving a voice to things: giving a voice to the river, giving a voice to a young slave and giving a voice to an immigrant or the son or daughter of an immigrant. These voices say a lot but don’t necessarily tell you what to think, they just tell the story. Poetry is a great way to connect the emotional journey with the physical.

How would you sum up the meaning of the documentary?

It’s inspirational. MJ is an inspirational person, doing a very challenging task, but trying to do it for more than just the goal of achieving the fastest known time, he’s running for something greater. There are themes of fatherhood, themes of hidden histories that aren’t widely represented, and also the Black experience living in London and going out into rural areas outside of London. And what it means to be a black British person today, or in decades that have gone. But ultimately it’s a film about struggle, and overcoming struggle. 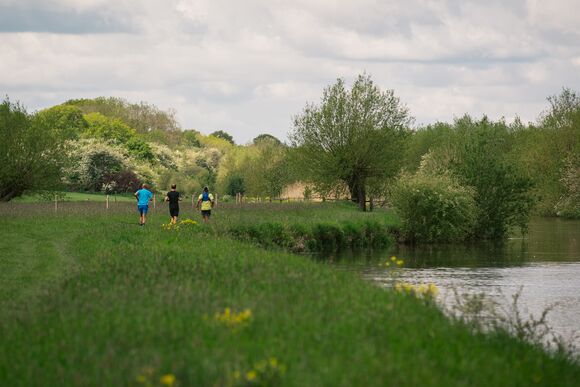 Watch Run To The Source on the Patagonia website.

Linkedin
RELATED ARTICLES
OTHER ARTICLES
Photographer Matthew Brookes recalls following a group of young people in Venice Beach living in search of the perfect wave.
Thomas Hoepker‘s images taken during a road trip across America provide a searing social commentary about a divided country.
Proposals to introduce a minimum GCSE threshold for student loans will disproportionately affect those from marginalised backgrounds.
The last few years have seen an increase in LGBTQ-led initiatives to feed the hungry, with many finding ways to stay afloat despite the challenges.
LGBTQ+ students are keeping the spirit of the original Pride alive by fighting for liberation for everyone, not just their community.
In the wake of the decision by the supreme court to overturn Roe v Wade, thousands of protestors filled the streets to express their rage and anguish.