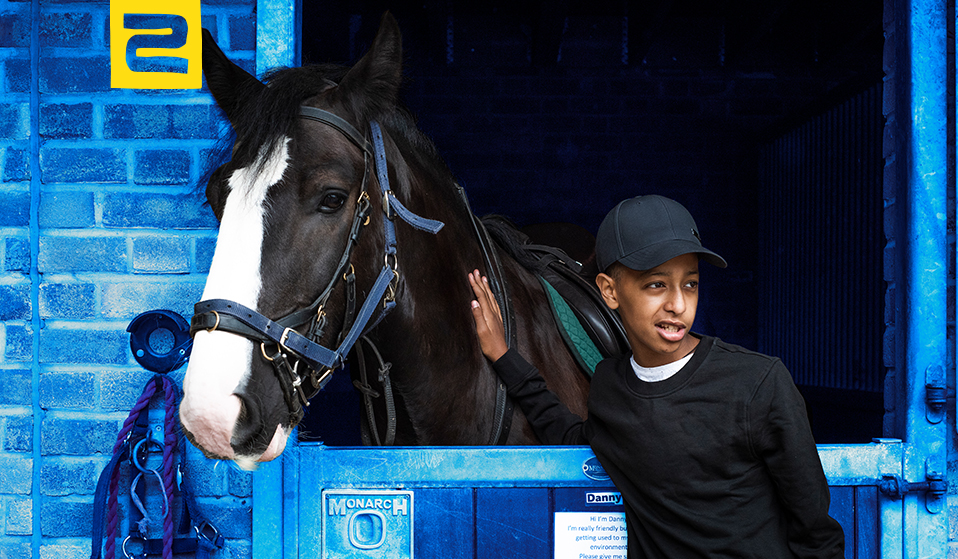 The healing power of horses

A growing number of stables and clubs are providing vital youth services, including equine-assisted therapies, for young people, and opening up horse-riding for all.

“At first it felt a bit weird to be sitting on an animal. Normally animals are small and you touch them. I was surprised to get on one.”

It’s one of the year’s fleetingly hot summer days and I’m at Ebony Horse Club – a riding school in the heart of Brixton – talking to 10-year-old Shilo. “If I’m angry and I come here after school, I get all the anger out. It makes me move on and calm down… horse-riding makes me happy again.” The more we talk about horses, the more animated he becomes. “When you go over jumps you feel like you’re flying!” 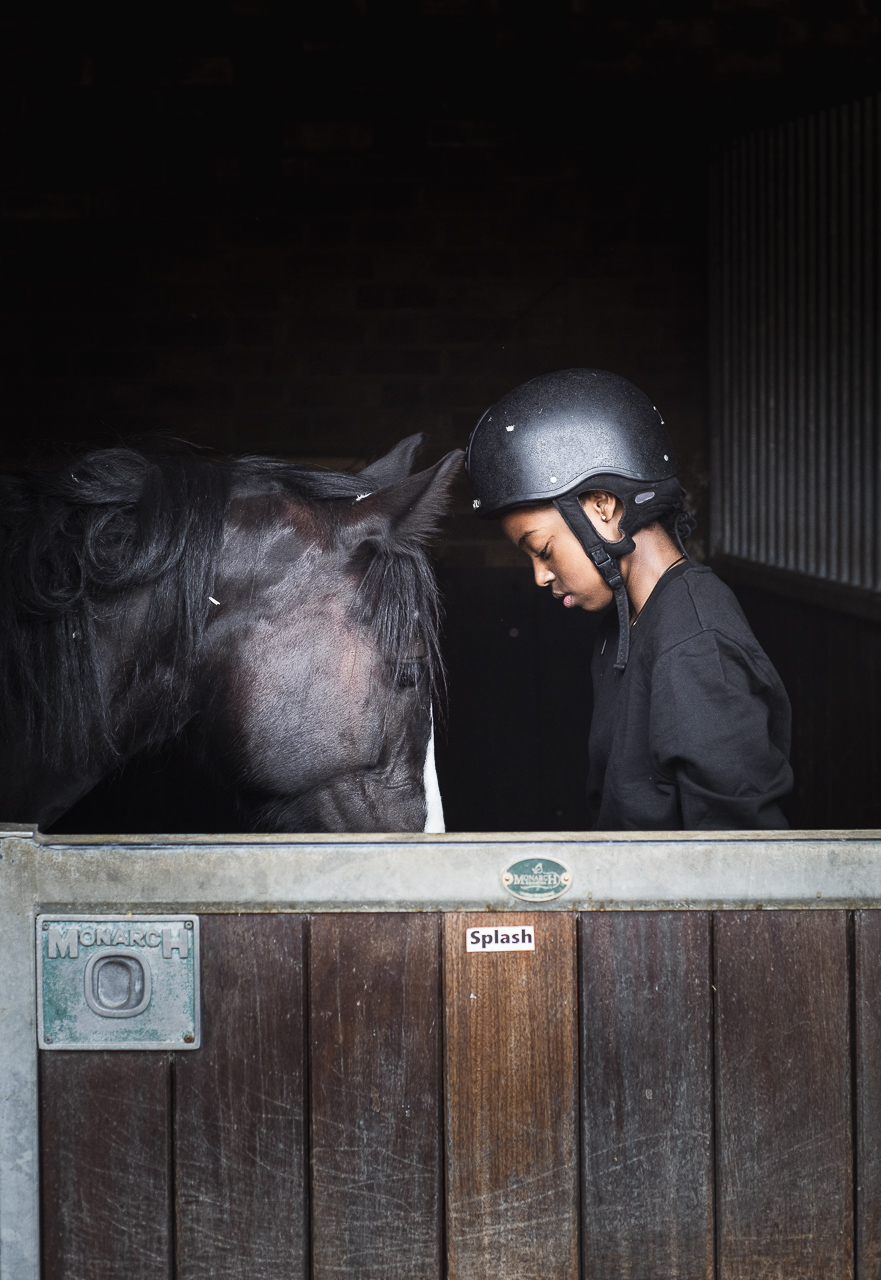 Nestled between tower blocks and railway arches, Ebony is as much a part of the local community as Brixton’s Caribbean restaurants and barber shops, and it reflects the community it serves. “I remember being so excited to tell my mum, ‘There’s a riding stables with black people!’ The diversity makes it so unique,” says Christine, one of the club’s instructors. “If you look through the gates, you see a lot of our young people are from BAME backgrounds – even our male to female ratio is about 50/50.”

Today, the beating sun isn’t slowing anyone down. Boxes of ice lollies are being distributed at a rapid pace, while teachers and volunteers saddle up horses for the next lesson. Taking a break from his Deliveroo shift, I meet Andrew, 18, who has been coming to Ebony for five years. “I used to get mocked [for riding]” he says. “But I had a strong mindset from the get-go. I enjoy it. I’ve done a lot with it. I’ve raced before, but it’s eventing that’s really inspired me – show-jumping, dressage and cross country. I never thought I’d be going to competitions. You know what type of area this is, when you see horses around Brixton, you just wouldn’t expect it.” 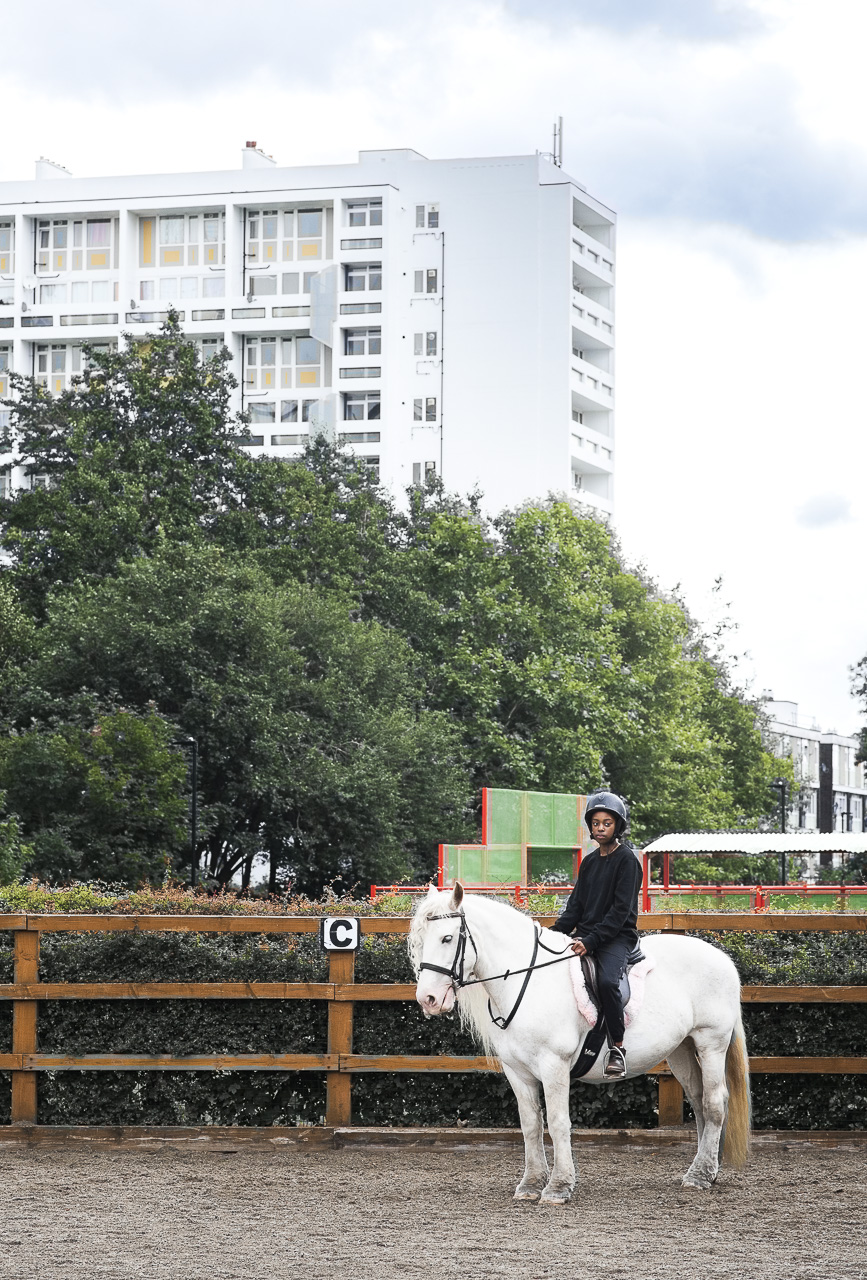 The equestrian world is often perceived as exclusive and inherently elitist. Most riding clubs and horse owners are based in the countryside making it difficult for people living in cities. It’s expensive – lessons can cost up to £75 an hour – and like many outdoor sports, it tends to be an overwhelmingly white and middle-class pursuit. But clubs like Ebony are challenging the status quo, offering an alternative way for diverse inner-city communities to experience riding. Lessons are subsidised and cost £3 an hour, and members can give back to the club and gain further experience by volunteering. 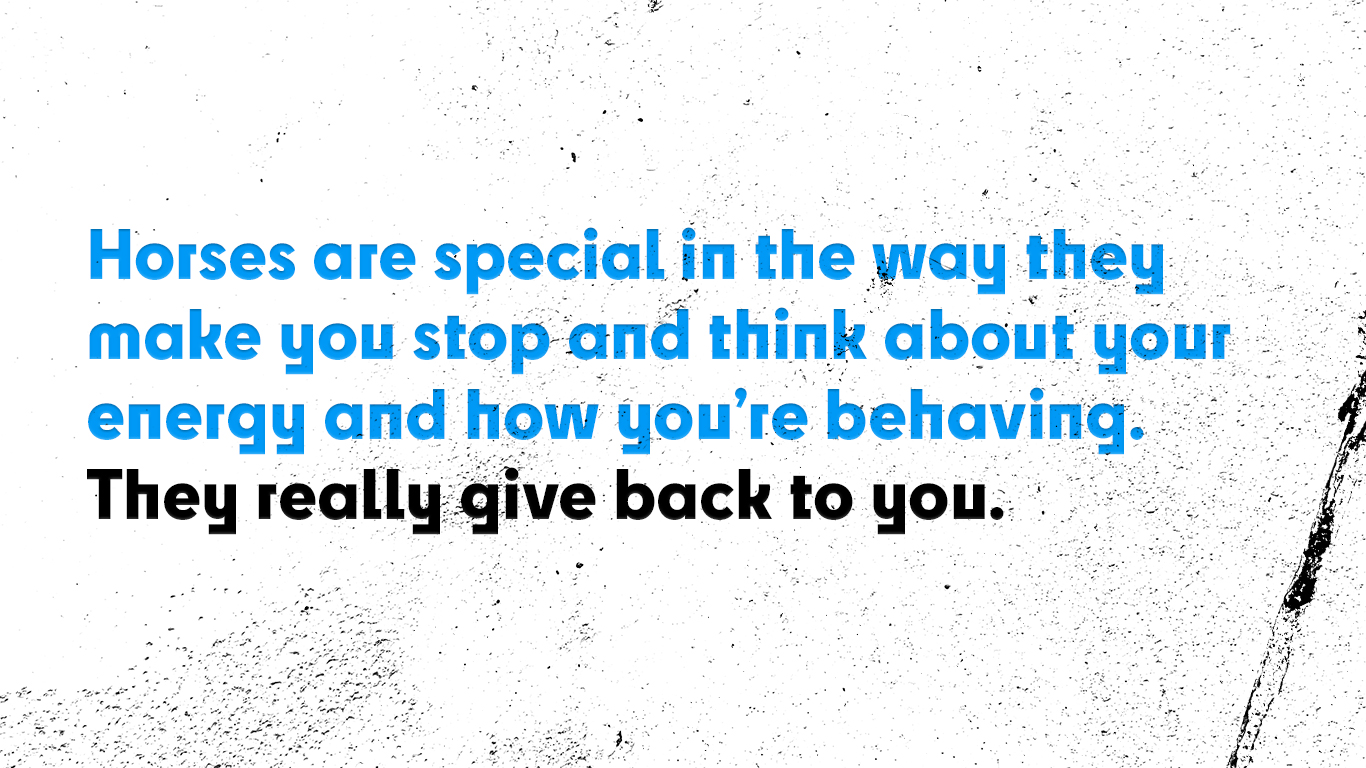 One of the things that sets Ebony apart – aside from the fact it’s a riding school in the middle of a city – is that it doesn’t just teach horse-riding. The club works with local services and employs youth workers to provide additional support to its members. “In London, and across the country, there’s a real lack of spaces where kids can just be,” says Ebony’s General Manager Naomi Howgate. “When people come here, they don’t necessarily come for the youth work, they come for the horses, but once they’re here, they realise that it is a bit more than just riding. We see a lot of teenagers that have challenges at home. Some might have a learning difficulty or be on the autistic spectrum and communicating with people can be quite hard. Horses are special in the way they make you stop and think about your energy and how you’re behaving. They really give back to you, and so we see young people build up these amazing relationships with horses. They often continue that [relationship-building] with people. If they love a horse and see how staff look after it, they learn to trust us too.”

Radhika Nagar is the club’s Senior Youth Worker, she supports Ebony members both during lessons and individual sessions. “Services refer young people to us, and they might be mixed in in lessons with people who don’t have any additional needs. We don’t single people out, we’re very inclusive. Some people thrive just by being here, and if anyone needs extra support we’re on hand.” 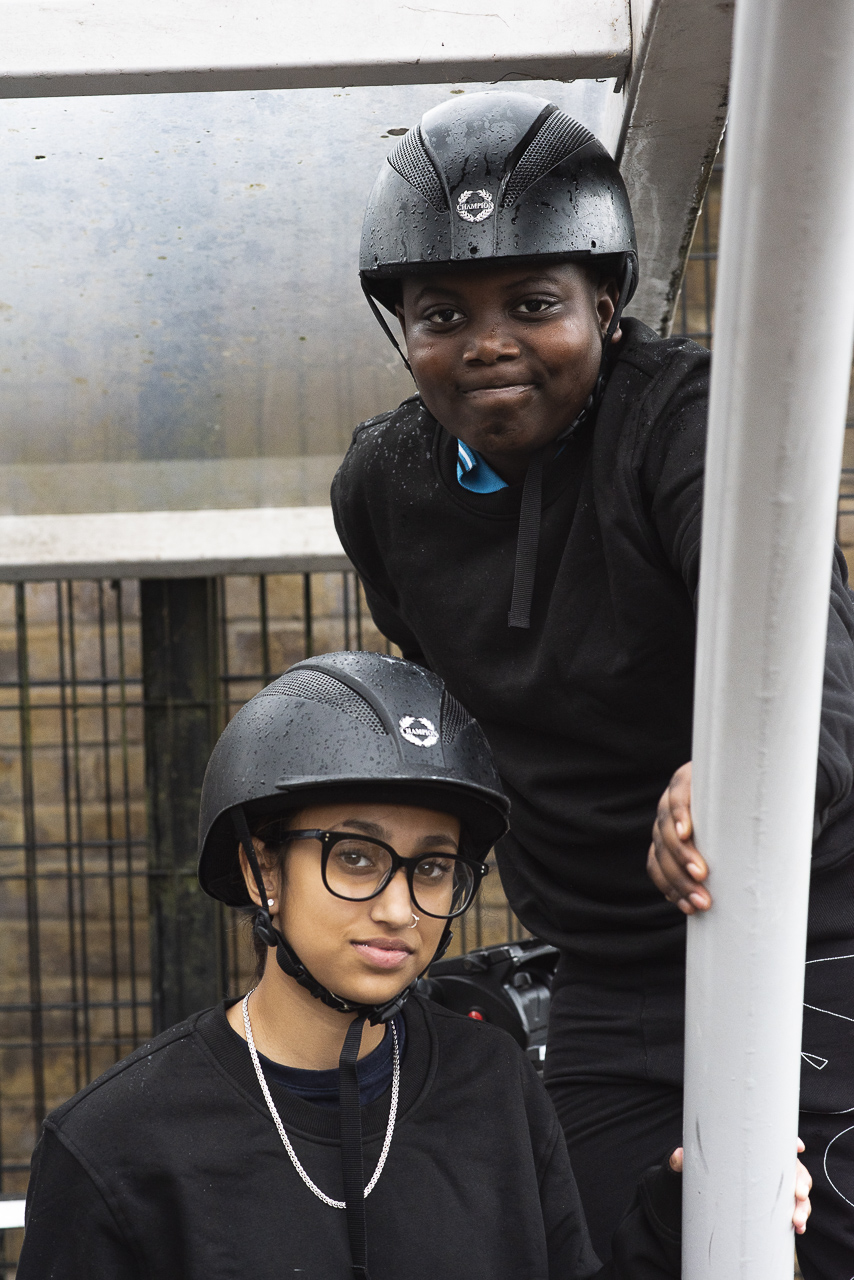 Though horse-riding and youth work might seem like a strange mix, equine-assisted therapies – an experiential form of therapy that involves working in collaboration with a horse, a therapist and an expert horse handler – are on the rise. In South Devon, 200 miles from Ebony, Hannah Burgon runs Sirona, a stables offering various forms of equine-assisted therapies. “I came from a completely non-horsey family,” she explains. “My parents divorced when I was five and my mum took my brother and I to live in North Wales, where I was lucky to meet this amazing woman called Lucy Reese. She wrote one of the first horse psychology books back in the ‘80s which looked at how we can understand horses and work with them in a kinder way, rather than the traditional dominant approach of ‘breaking them in’”.

Interested in how humans can foster alternative relationships with horses, Hannah started working with Lucy, learning how to train and rehabilitate horses with behavioural issues. “They became my therapy,” she says. “If you’re having a hard time as a teenager, going and hugging your horse is really therapeutic. I always had that understanding.”

After working at Fortune Centre for Riding Therapy, a specialist college for young people with learning difficulties, she eventually went on to set up her own practice in 2012. Today, Sirona’s programmes include Equine-Based Mindfulness (EBM) which helps young people feel safe around the animals. “At the beginning of every session we teach a very simple breathing exercise so we can be calm around the horses, which in turn, keep the horses calm.” 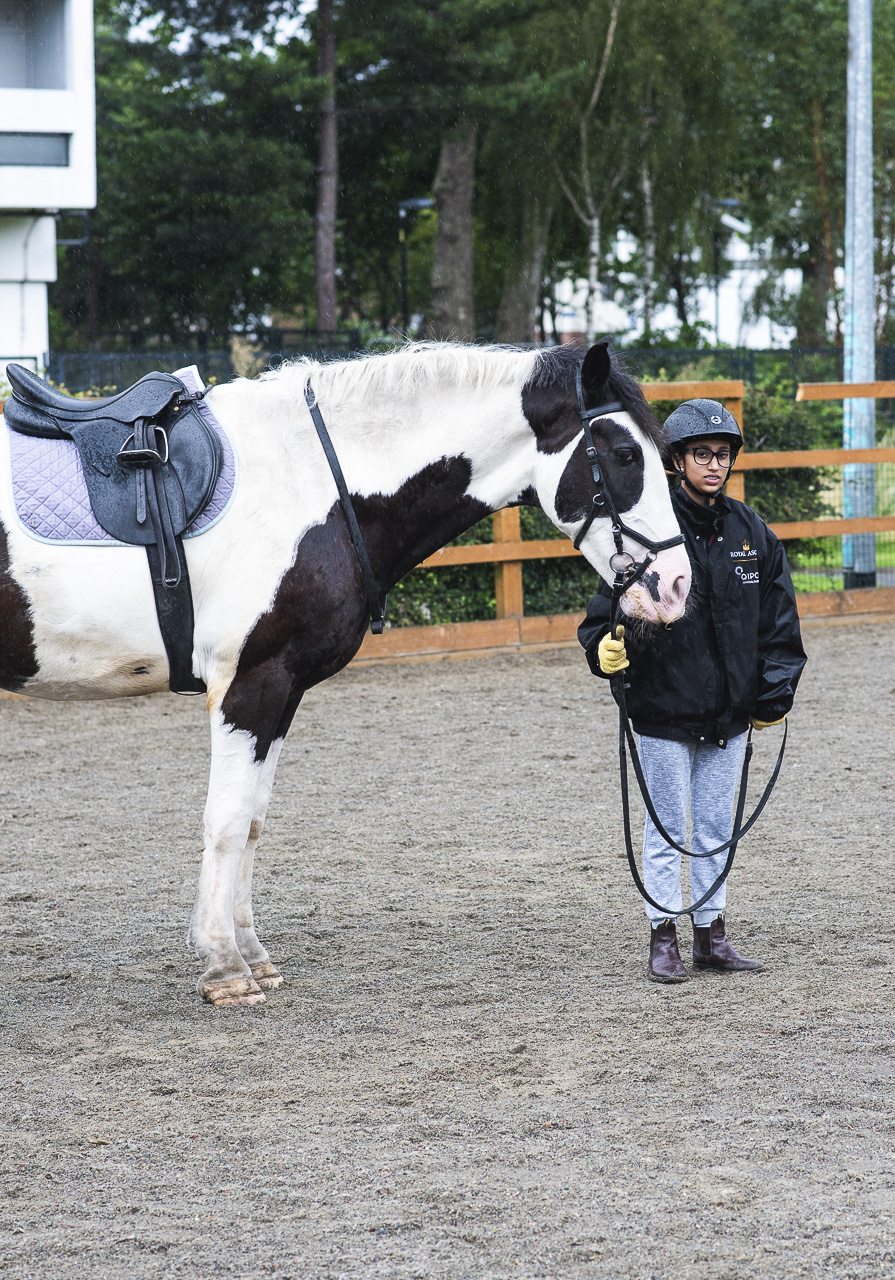 Hannah says often young clients are initially dubious about working with horses. “We get a lot of young males from youth offending who turn up and think there’s no way horses are for them. As soon as they’re with a big horse that all changes. We have a rescue horse called Toro, he’s big and black and he’s very bolshy – he had a difficult past and his way of managing his anxiety is by barging into you. He might try and bite you, he can be really intimidating. One particular young person built the most amazing relationship with him. He could understand the horses behaviour, he knew that sometimes it would be more sensible for Toro to walk away from things rather than try and fight. He really made those connections and that’s the beauty of this work – you can tell a young person about consequences till you’re blue in the face, but they have to understand it themselves, and if they can understand it through the horse, then that’s much more powerful.”

While equine assisted-therapy is a fairly new phenomena in the UK, the charity Riding for the Disabled (RDA) has been using horses to support people with mental and physical disabilities since the1960s, now serving over 26,000 people a year. “For people who have mobility problems or degenerative conditions where they are losing core strength, then the physio that comes from the movement of the horse can be incredibly powerful” says Caroline Ward, Head of Communications and Insight at RDA. “Then you have people who come to us with a whole range of learning disabilities, there are so many ways riding can support people with those conditions. You can’t underpay the confidence-boosting, relationship-building elements of being part of an accepting community group that is welcome, accessible and treats everybody equally.” 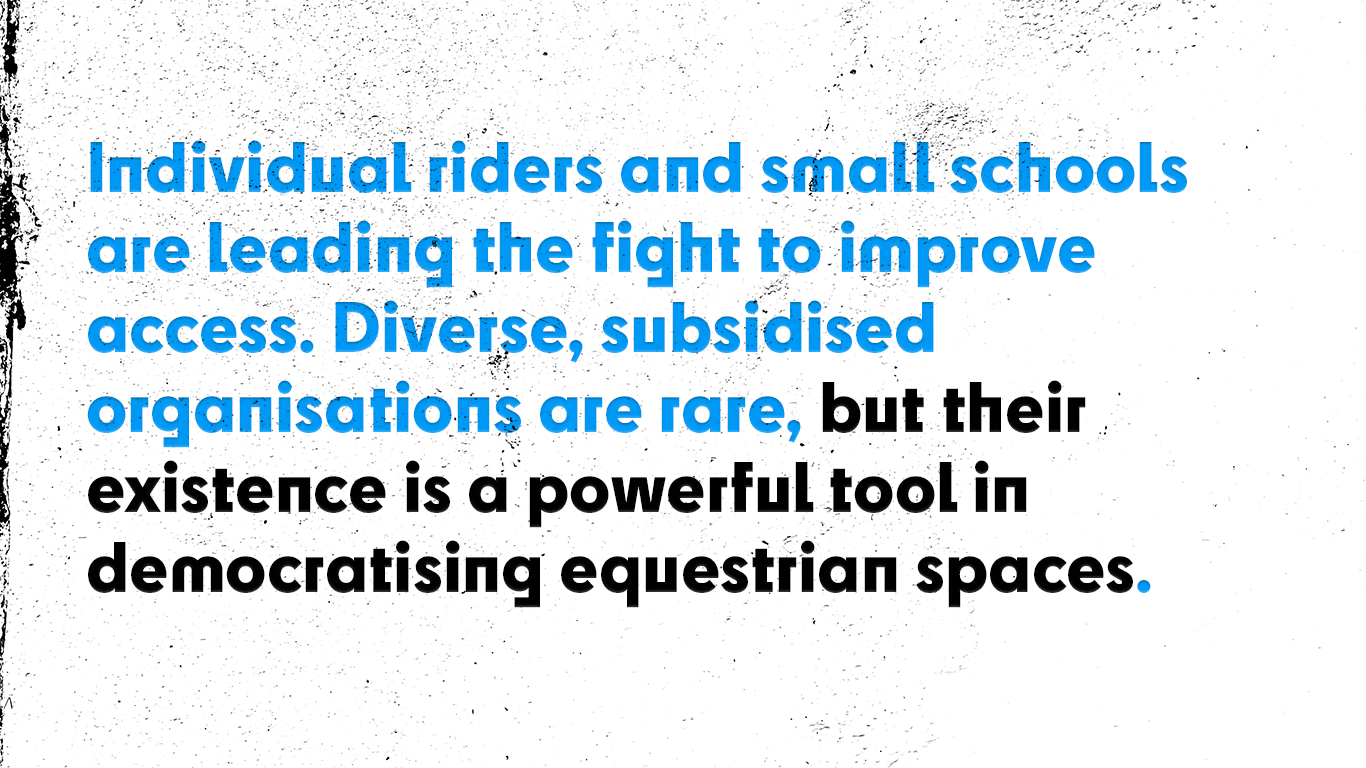 With horses offering significant physical and mental health benefits for a broad section of society, individual riders and small schools are leading the fight to improve access to the equestrian world for all. Diverse, subsidised organisations like Ebony and Sirona are still rare, but their existence is a powerful tool in democratising equestrian spaces and challenging larger federations.

British Equestrian – the National Governing Body for horse sports in the UK – currently holds the intermediate level of the Equality Standard for Sport, after demonstrating a commitment to equality. It’s now working towards the advanced level, which will be achieved when significant progress towards diversity is evident within “the board, staff, members and participants”, and the organisation has developed, “further initiatives to address each protected characteristic”. 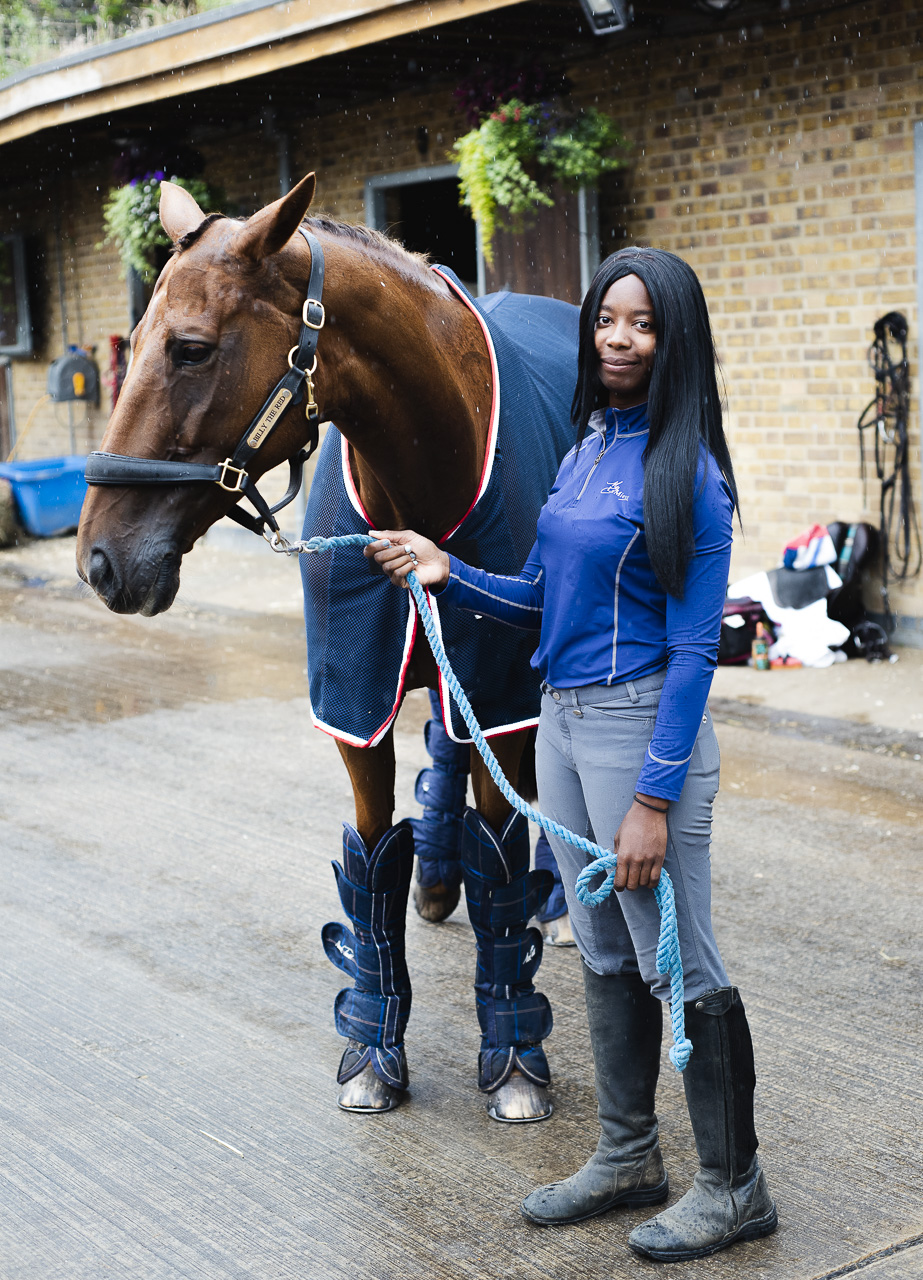 Peckham teenager Khadija Mellah is one of the club’s powerful success stories. After falling in love with riding and racing, she was able to progress in the sport, winning the Magnolia Cup in 2019. Her historic victory marked the first time a British Muslim had won a UK race, as well as the first time anyone had raced in a hijab. This year, aged 20, she set up the Riding a Dream academy with the British Racing School – an initiative to support riders from under-represented backgrounds get into racing through scholarships and residential weeks. While shifting the perceptions and the accessibility of horse-riding shouldn’t fall on individuals, as more riders and clubs unite in their fight for change, the wider industry is taking note and a new precedent for progress is being set.

Linkedin
RELATED ARTICLES
OTHER ARTICLES
The Egyptian government are continuing the repressive mistreatment of environmental campaigners.
Over the weekend, the United Families & Friends Campaign organised a protest calling for an end to deaths at the hands of the police.
After voting to strike across England, prison teachers explain why they’ve been pushed to a breaking point.
Photographer Ira Lapu documents the lives of ordinary Ukrainians living amid a brutal conflict.
With the singer’s tour in full swing, we sat down the musical production company who made the electrifying show possible.
After being subject to racism growing up, Kavi Pujara’s photo series allowed him to reconnect with and reimagine his hometown.