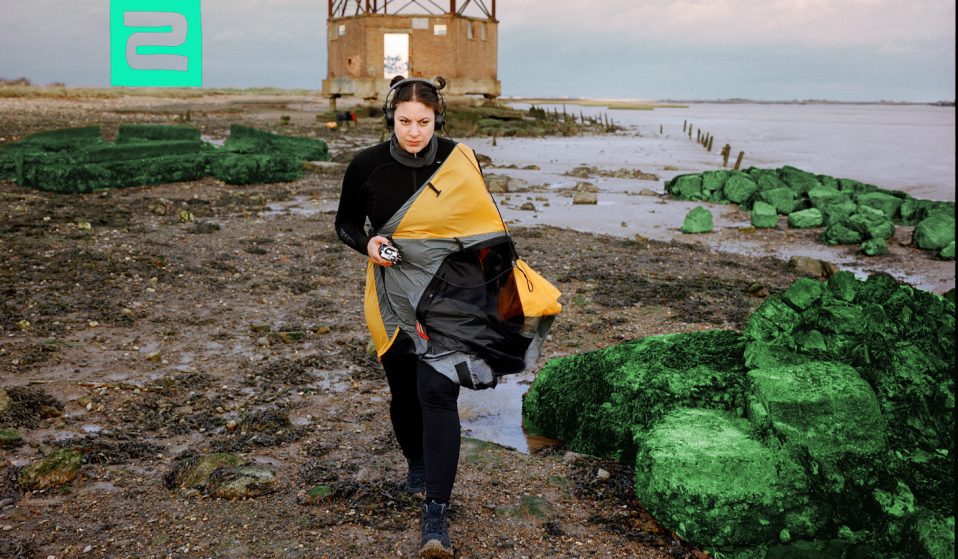 How the sounds of nature, air force bases, walking across the country, Windrush and synthesisers have influenced one woman’s journey through music and life.

How the sounds of nature, air force bases, walking across the country, Windrush and synthesisers have influenced one woman’s journey through music and life.

Zara Truss Giles is a renegade. She’s walking her own path to her own tune, quite literally – and she’s perfectly happy with that. A trained dancer, successful DJ, avid walker, outdoor enthusiast and self-confessed analog synthesiser obsessive, Zara’s been combining the inspiration and sounds of nature with the music she creates. “Walking has always been therapeutic for me,” she says. “The silence of it, the challenge of it, having to navigate, map read, force your body to keep pushing through to get to your end point before dark. It’s how I meditate and clear my mind. It’s also where I feel my most creative.”

She recently walked across the UK, from Bowness-on-Solway along Hadrian’s Wall to the coast beyond Newcastle. “I was researching untold African histories and presence in the UK going back as far as 122 AD,” she says. “It was a really difficult time and that walk saved me in so many ways. It was during the easing of lockdown and after a series of Black Lives Matter Demonstrations and a lot of visible violence towards black people, including George Floyd. There was a lot to grieve for and that walk really helped centre and heal me. Going to places with really strong histories and ties to our ancestors is incredible for my mental health. I’m able to place myself a little bit better and feel more comfortable in the histories and stories that I know to be true but can struggle to find reminders because we are not taught these truths in school, college or in a lot of institutions. Getting out of London is key for me to do this.” 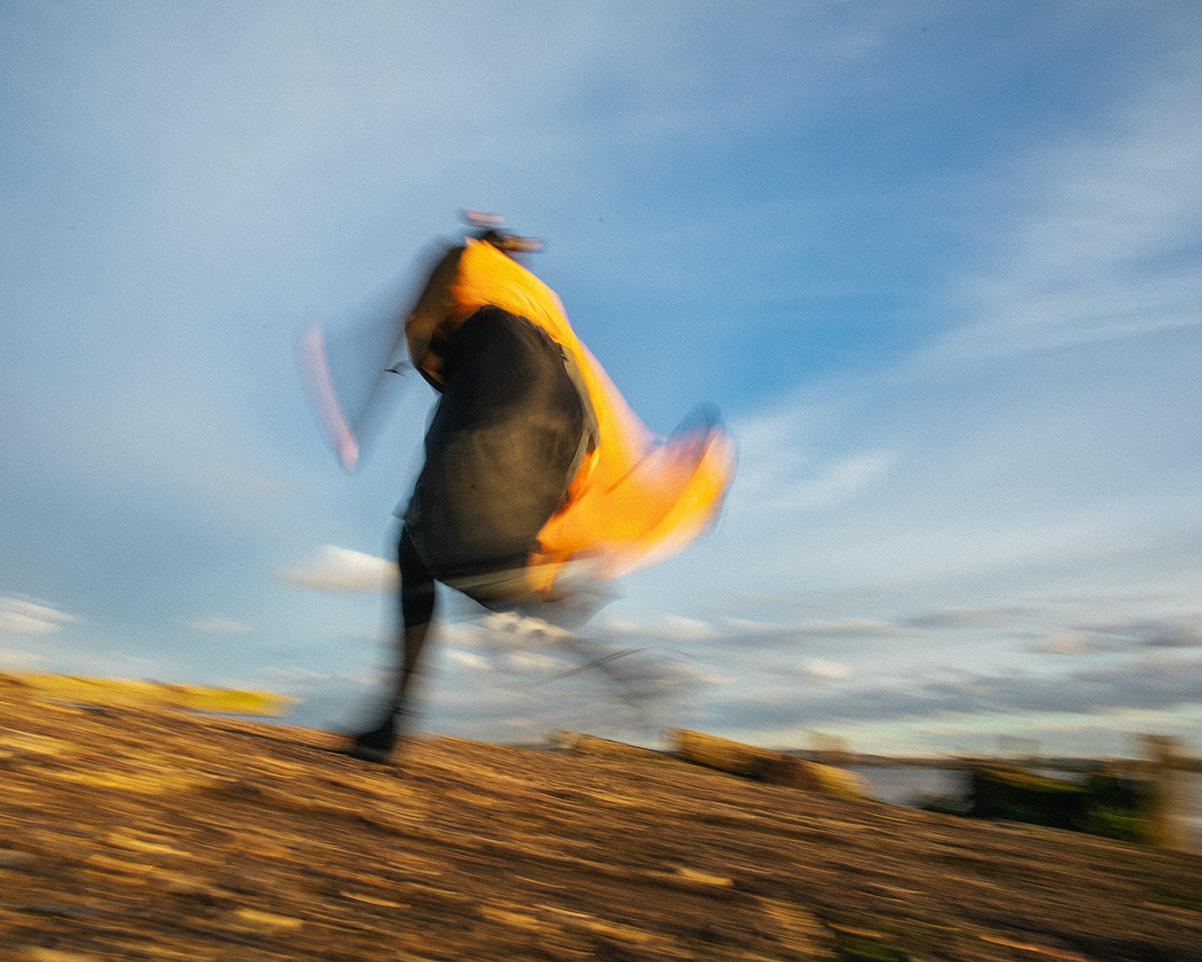 Born in Peterborough, UK, before moving to an Air Force Base in Missouri, Zara has been based in London since she was 17 and is co-founder of the collective Distribution of Power – a place for experimenting and workshopping text, voice and field recordings and archival material with synthesisers. They’re aiming to build an Electronic Instrument Library and Archive for borrowing, storing and collecting a range of instruments, including synths, which can be accessed and shared by those who have limited means. “I can hear so much nature in synthesisers,” she says. “I really enjoy being able to recreate and expand and share how I hear the world. For a very long time I assumed that everyone experienced sound, vision, touch, the sensory world in the same way as me. I just thought everyone saw sound as physical moving shapes, colours and weight.

“I think the first time I questioned this was studying music. I could never learn how to sight read in music. I’d spend extra time writing out the notes in letter form, learning what the notes sounded like to know where to place my hands on the keys of the piano. It made me feel a bit thick, that style of learning, but I also had a passion for it and could learn something really quickly if it was played in front of me. Maybe that’s why I feel so comfortable walking, and fold the act of walking into my work at any given opportunity. We don’t learn how to walk by looking at pictures, you just have to watch, practice, fall on your arse and get back up until you’ve found a way to get from one place to another.” 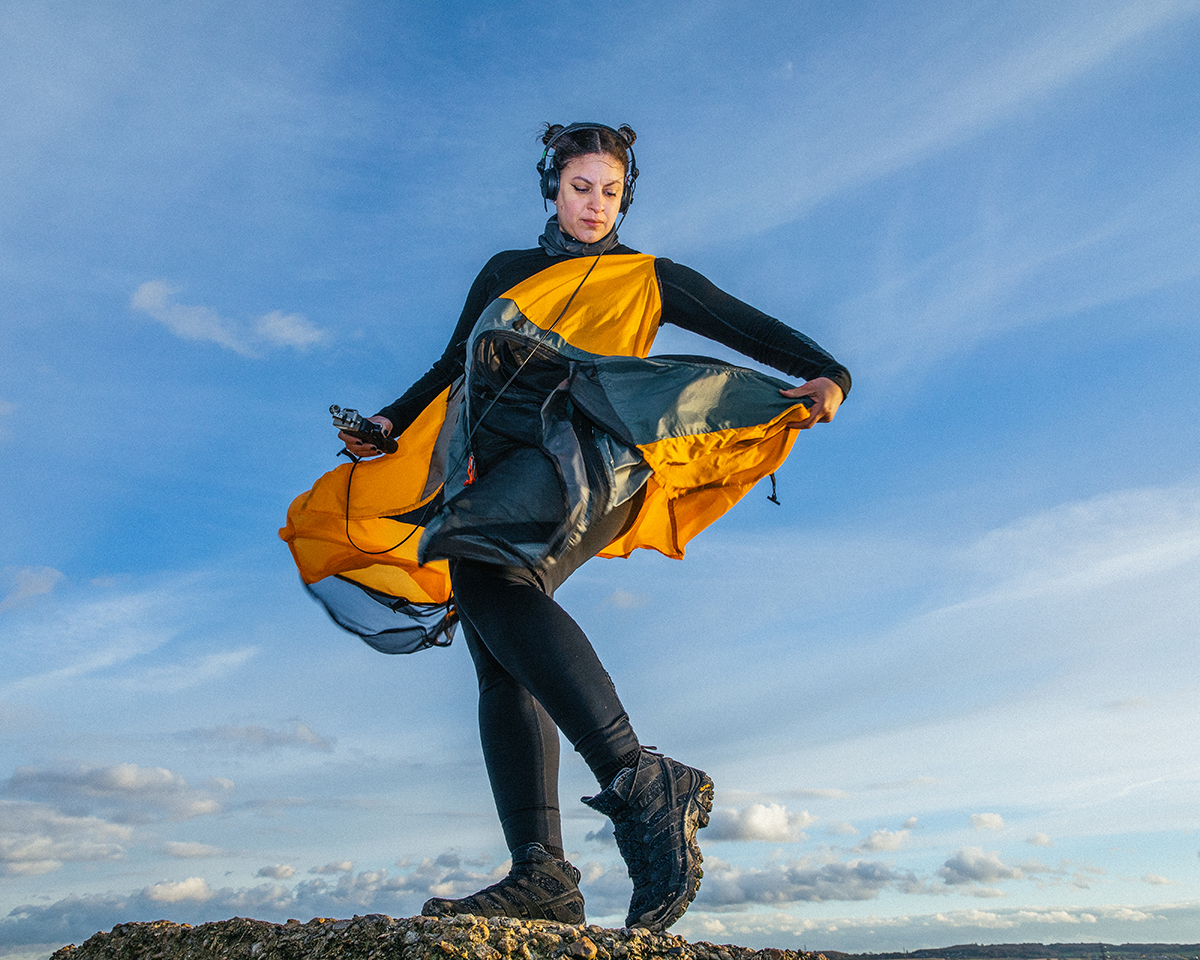 She may live in London but getting to the outdoors is an integral part of Zara’s DNA. “I am of multi-heritage and also feel I’ve inherited ancestral memories of nature from my maternal Jamaican/Jewish family who migrated to the UK as part of the later Windrush generation,” she explains. “My paternal family mainly come from East Anglia, and my earliest memories are of walking in nature and the study of land, trees and birds. My maternal grandparents travelled from Jamaica to London to Northamptonshire, where my grandmother worked for many of the clothing and shoe factories to support her family.”

The move to the United States came when her stepdad, who was in the American Airforce, was stationed first in New York, then Boston, and eventually at the enormous Whiteman Air Force Base in Missouri – a place that turned out to be pivotal in her musical vision. “It was loud with the boom of military planes,” she explains. “I sometimes wonder if that’s why drone sounds can sound quite calming to me. I’m really into loud industrial noises, metallic clangs and durational bassy hums, as well as quite opposite sounds of water, birdcall and weather. I remember hearing an archived interview with electronic music pioneer Delia Derbyshire and she said, ‘I was there in the Blitz and it’s come to me, relatively recently, that my love for abstract sounds [came from] the air-raid sirens: that’s a sound you hear and you don’t know the source of as a young child… then the sound of the ‘all clear’ – that was electronic music.’” 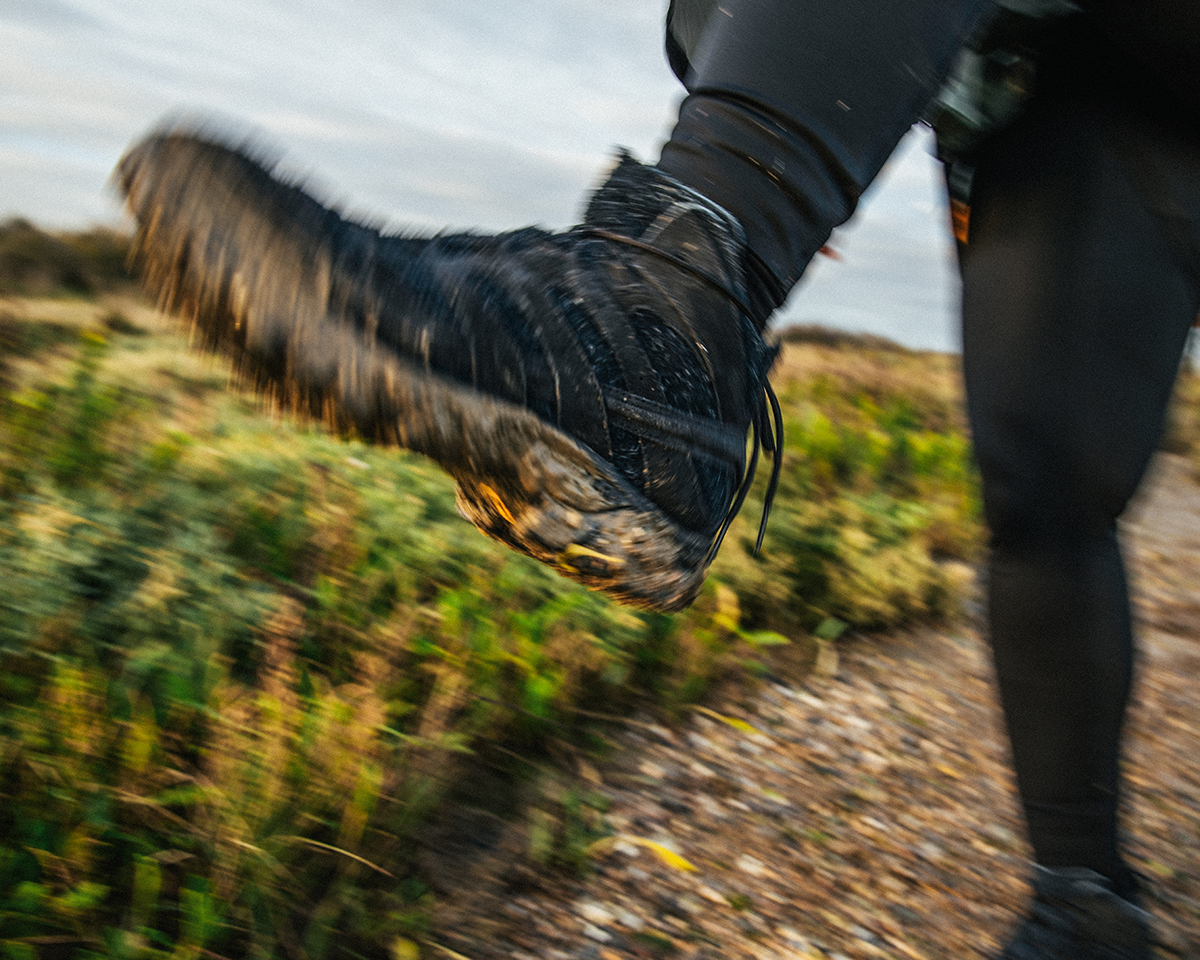 Zara’s latest project is called W.H.Y. – an experimental live a/v performance and archival project, which references activists, political figures and theorists. It celebrates those who have, and continue to, prop up community and social/human rights movements from Black, queer and feminist activists, as well as witches and folklore storytelling, psycho-geography to working class histories and popular culture.

For this feature, Zara chose to be photographed at the marshland at Tilbury Docks – the principal container port of the Port of London, and perhaps most infamous for being where the ‘Windrush Generation’ – those who arrived in the UK from Caribbean countries between 1948 and 1973 – first set foot on UK soil. It’s a place that’s close to Zara’s heart: “It means so much to come down to Tilbury Docks Marsh or Tilbury Bridge for the shoot. It allows me to think, hear and see the land that my ancestors and maternal grandparents arrived on in the UK from Runaway Bay and Kingston, Jamaica, during the Windrush.” At the photoshoot Zara did some field recording to capture the sounds – both natural and industrial – of Tilbury and will be turning it into a body of work. 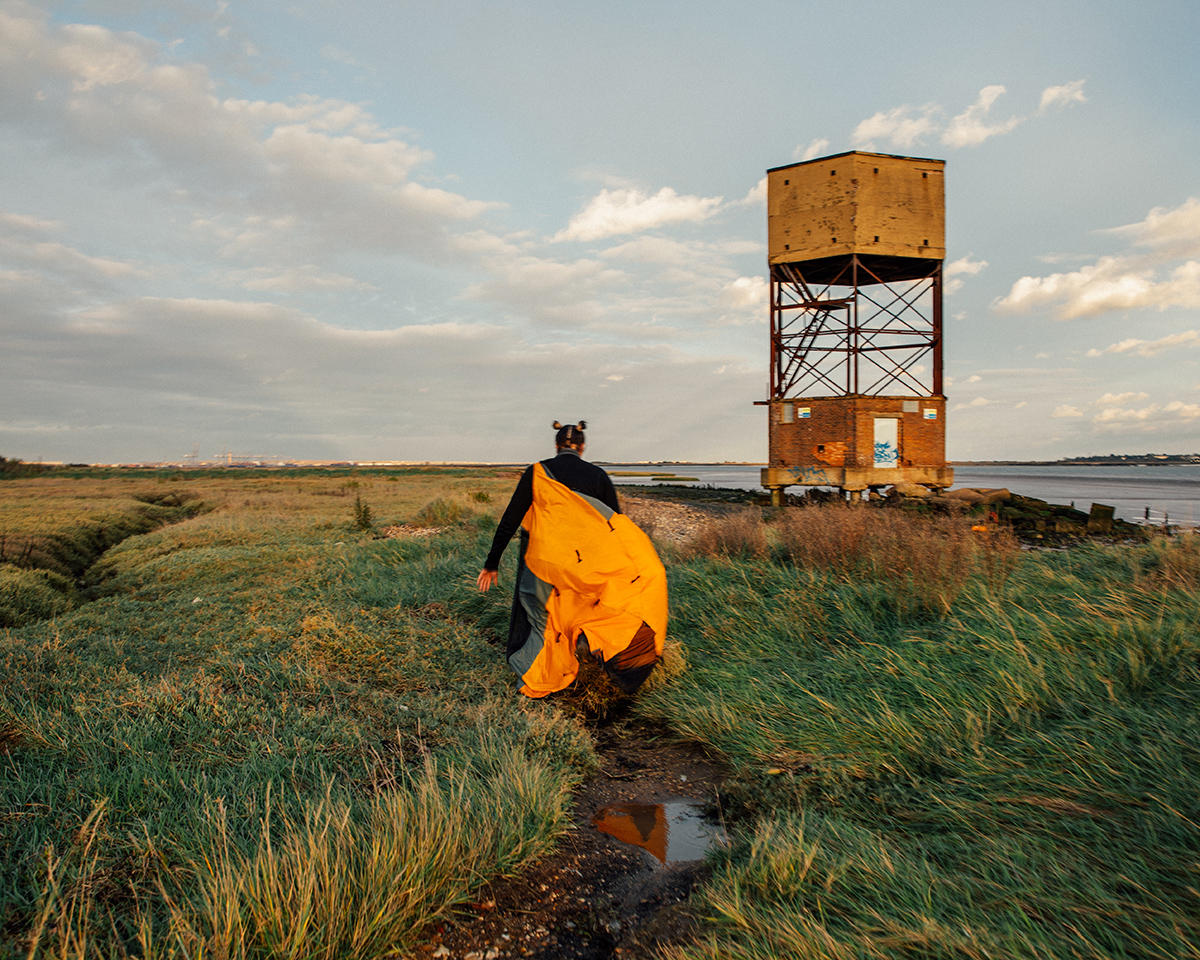 Over the years Zara has gone on long-distance walks alone or with her daughter, partners, friends and various walking groups across the UK. “A few of us had a walking group called Hashtag Hipster Walking Group up in Glasgow,” she laughs. “Over the past five years I have tended to walk more regularly around Wiltshire where some good friends of mine live. These walks are fascinating. The group always changes, and we all have interests in experimental sound, esoteric histories and early neolithic structures.”

Walking around the countryside in the UK can be challenging for Black people and people of colour – something that Zara has personally found tough at times. “I went walking around Cornwall and I got a lot of looks, heard comments and felt unwelcome,” she says. “I was followed on a campsite and asked if I was meant to be there and where I was ‘from’ a lot. It was really uncomfortable. About a month later I discovered the book Journey Through Britain, by John Hillaby, where he walks from Land’s End to John o’ Groats in the 1960s, and talks about the history of where some of the nice and not-so-nice encounters he finds stem from. Reading this book really helped heal some encounters I’ve had and deepened my understanding of collective ignorance and prejudice, which helps me see through it and not put me off walking.” 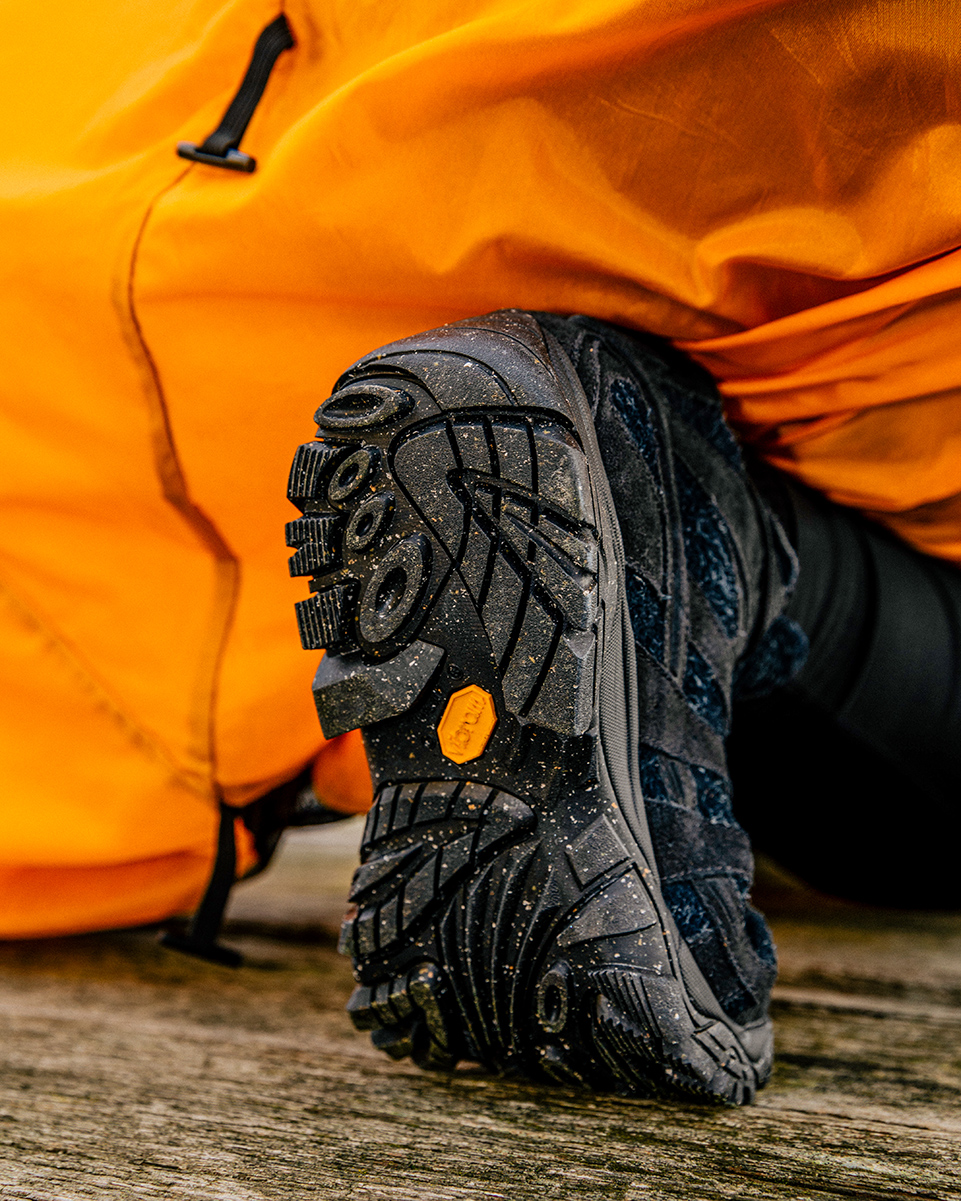 Zara wears the Moab 2 Decon Mid in black. The Moab 2 Decon mid is a 1TRL double-suede iteration of the walking shoe staple. A reimagination of one of Merrell’s most iconic and versatile silhouettes through the lens of a casual desert boot. Using a combination of suede and mesh to create a breathable lining, the boot also features 100% recycled laces and webbing as well as recycled mesh lining. A molded nylon arch shank, Merrell AirCushion and EVA foam midsole sit on a Vibram® EcoStep outsole, made from 30% recycled rubber. Delivering instant step-in comfort with no need for breaking in.

1TRL is an exclusive collection of outdoor footwear designed and curated by outdoor footwear innovator, Merrell. Sitting at the intersection of contemporary culture and outdoor performance, 1TRL introduces new concepts alongside reinterpreted classic models. Embodying the core principles of exploratory design, independent experimentation and respect for natural spaces that founded the footwear giant.

Linkedin
OTHER ARTICLES
A new podcast is opening up the conversation between trans women and trans amorous men in the hope of building coalitions.
After blocking the Scottish government’s gender recognition reform bill, Westminster is now devising further changes to the law to make it harder for trans people to self-identify.
AI companies that develop image-generators using copyrighted artwork from the internet are coming under fire from artists who say that it amounts to theft.
David 'Dee' Delgado’s photo project is about honouring and uplifting the city of his youth, and a world rapidly disappearing under the relentless onslaught of gentrification.
Since 2007, Gideon Mendel has made 20 trips to document floods in 13 countries. The result is an alarming record of what has already been lost to the climate emergency.
Theo McInnes’s photos of the annual event provide an intriguing snapshot of contemporary Britain.