Outdoor / The climber welcoming LGBTQ+ people to the wall 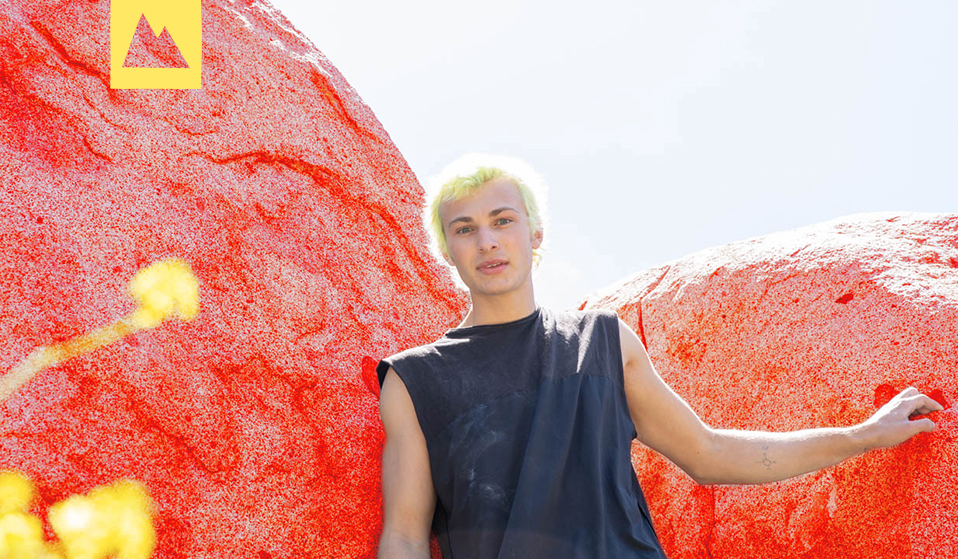 Karl Ludvik is a strong and talented gay climber. Throughout his youth contest career, he’s sought to challenge the narrative that only straight men get to be tough. And now, he wants to help others do the same by tackling the underrepresentation of LGBTQ+ people in climbing.

Karl Ludvik is a strong and talented gay climber. Throughout his youth contest career, he’s sought to challenge the narrative that only straight men get to be tough. And now, he wants to help others do the same by tackling the underrepresentation of LGBTQ+ people in climbing.

Climbing, like most historically hyper-male pursuits, is not a sport that celebrates queer culture. Instead, its narrative focuses on strong men taking on physically-gruelling ascents, or stories of extreme survival – such as the climber who had to saw his own arm off after being trapped in a canyon for 172 hours. And while we’ve thankfully moved beyond the days when it was socially acceptable for first time ascenders to name climbing routes using homophobic slurs, you don’t see a lot of openly queer climbers on the scene either.

This makes 18-year-old Karl Ludvik a breath of fresh air. The former youth contest climber, who has Czech heritage but moved to San Diego when he was 12, is one of the few who frequently posts about his sexuality and is vocal in his support of LGBTQ+ rights. His social feed is a mix of technical climbs on indoor walls and outdoor boulders, interspersed with rainbow emojis and dreamy portraits of him with captions like: “me looking kinda gay”. 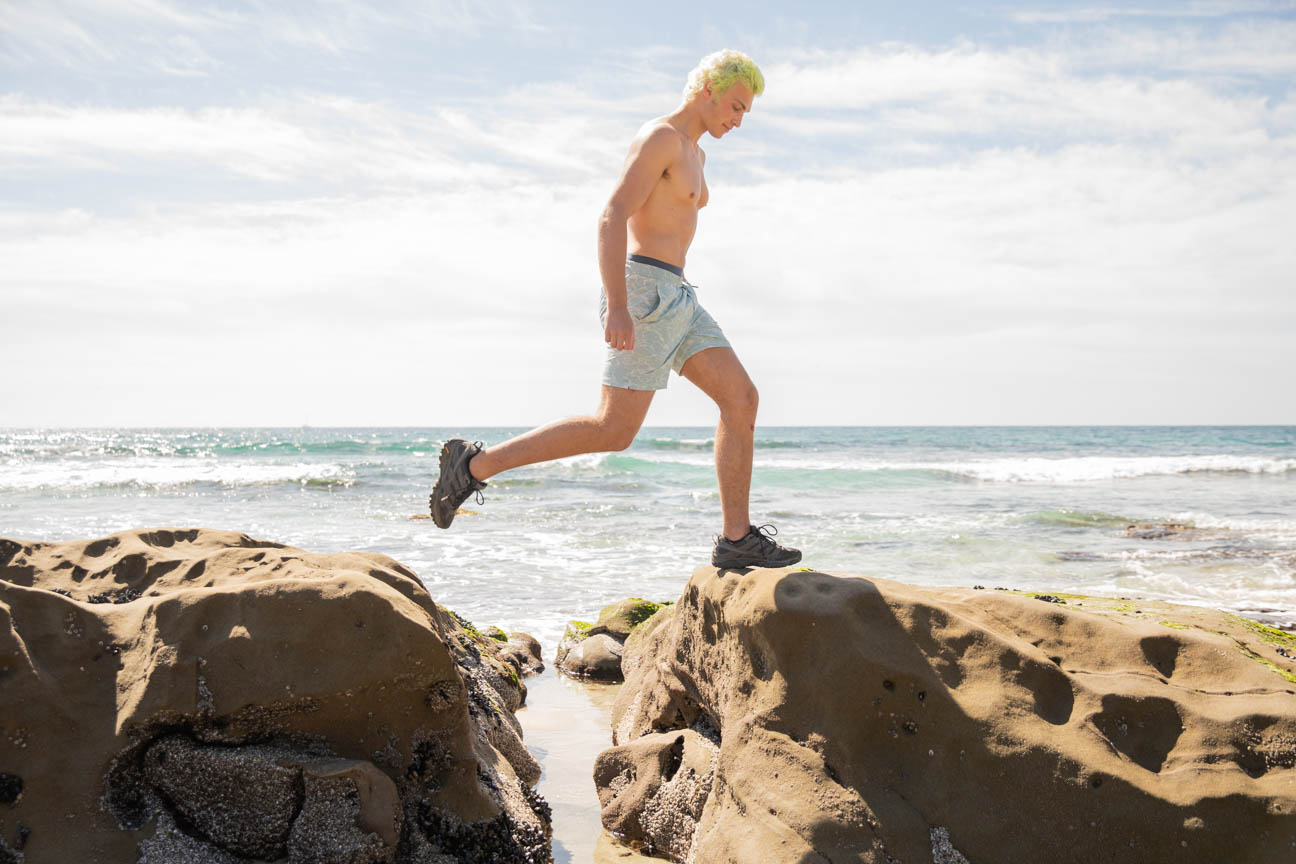 “I’ve never had a climber say anything bad or weird to me,” Karl tells me over video chat from his apartment a few streets from the Pacific Ocean.  “In my experience, climbing has always been accepting of gay people and of whoever you are.” But he’s also aware from talking to friends and from the messages he receives online that climbing can still appear quite conservative and insular, and not necessarily a welcoming place for LGBTQ+ people looking in from the outside.

“Part of the reason I try and post stuff about me being gay on Instagram is to reassure people [that it’s a safe space],” he says. “I don’t care at all that I’m gay, it doesn’t define me, but I get DMs all the time saying: ‘Oh my god, I’m so happy you’re posting about this’ and ‘thank you for showing that you can be a strong gay climber.’”

For Karl, it is super-important to counter the narrative that champions straight men as strong and minimises gay men as somehow lesser in that regard. “Climbing is a really tough sport, it’s really hard but it’s not just straight people who can do tough sports,” says Karl. “Gay people can do that as well, that’s what I want to show people, that’s why I post like that.”

Karl started climbing relatively late compared to other kids on the contest circuit. He first tried it aged 13 but quickly became obsessed. “I was a really big nerd,” he says, “Then all of a sudden I found climbing and it was the greatest thing ever. I felt like I needed to do it all the time and would climb for six hours a day.”

At one point his coaches had to ban him from the wall to enforce some rest days in his schedule, but that dedication also paid off and he soon began to rise up the US rankings, competing in National Cup events, and travelling to Japan and Europe for the sport. He enjoyed contests, especially the challenge of intense problem solving in a short space of time, which reminded him of maths, another passion of his, and he loved the competitive element too. 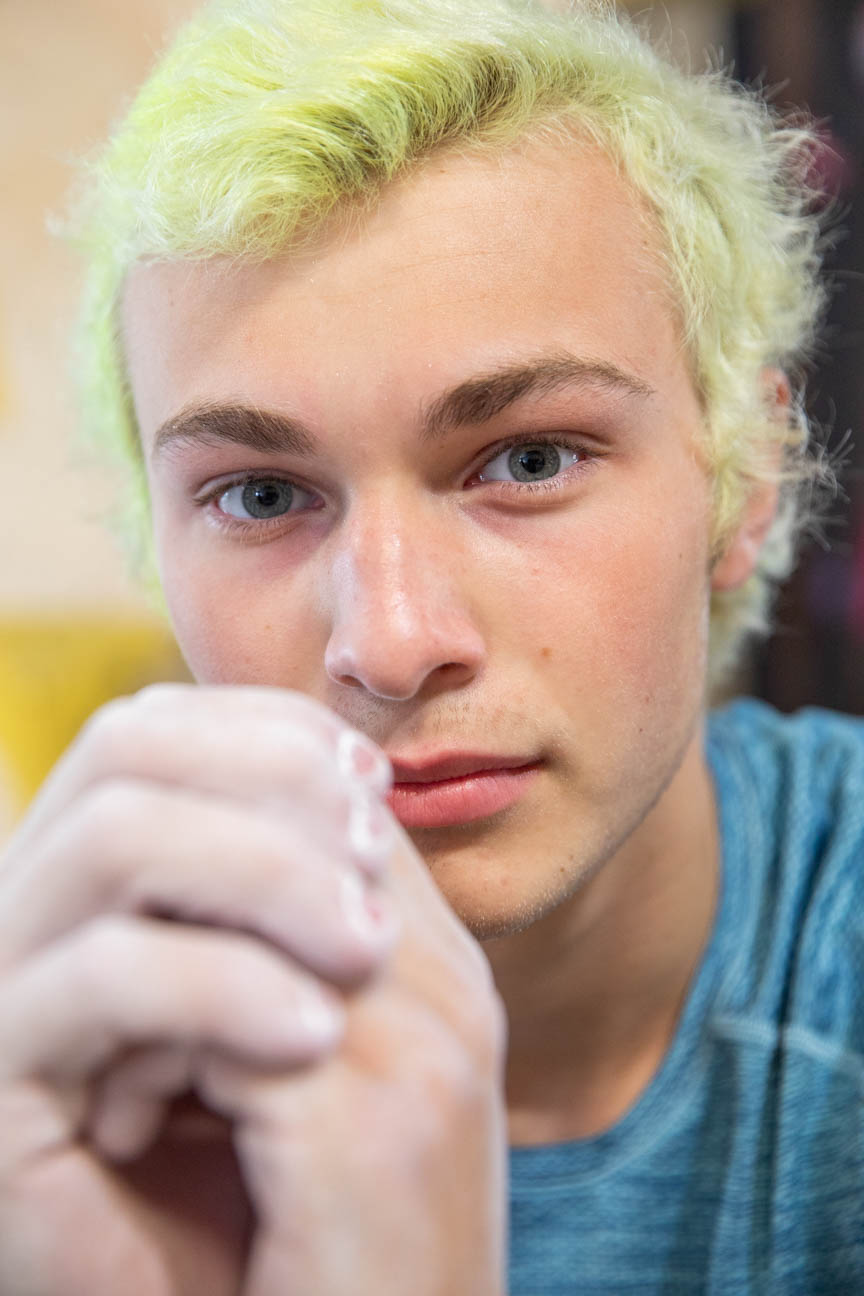 “It feels good to beat people,” he says, “Like you’ve done all this hard work and now it’s paying off.” But he’s a sensitive soul and Karl found it frustrating when contests didn’t go his way, like the time he placed 13th at the US Nationals but only the top 12 made the final; he left the venue in tears. “I’d made a mistake, it wasn’t like I was super tired and couldn’t do more,” he says, still visibly vexed about it now.

When lockdown struck in 2020, Karl was in the best shape of his life and he found the enforced break from contest climbing a struggle, especially as the indoor walls closed too. “I was really excited to compete that year and bummed that it couldn’t happen. It really took a toll on my mental health,” he says.

Karl has had to work hard to get his climbing fitness back but doing the sport again regularly has helped him recover, both physically and mentally, from the stress of this past year. “Climbing is like a natural high,” he says. “My body feels better, and I’m happy when I’m climbing. You can’t be sad or think of anything else, you’re just there on the wall in the holds, moving your body, it’s the best meditation.” 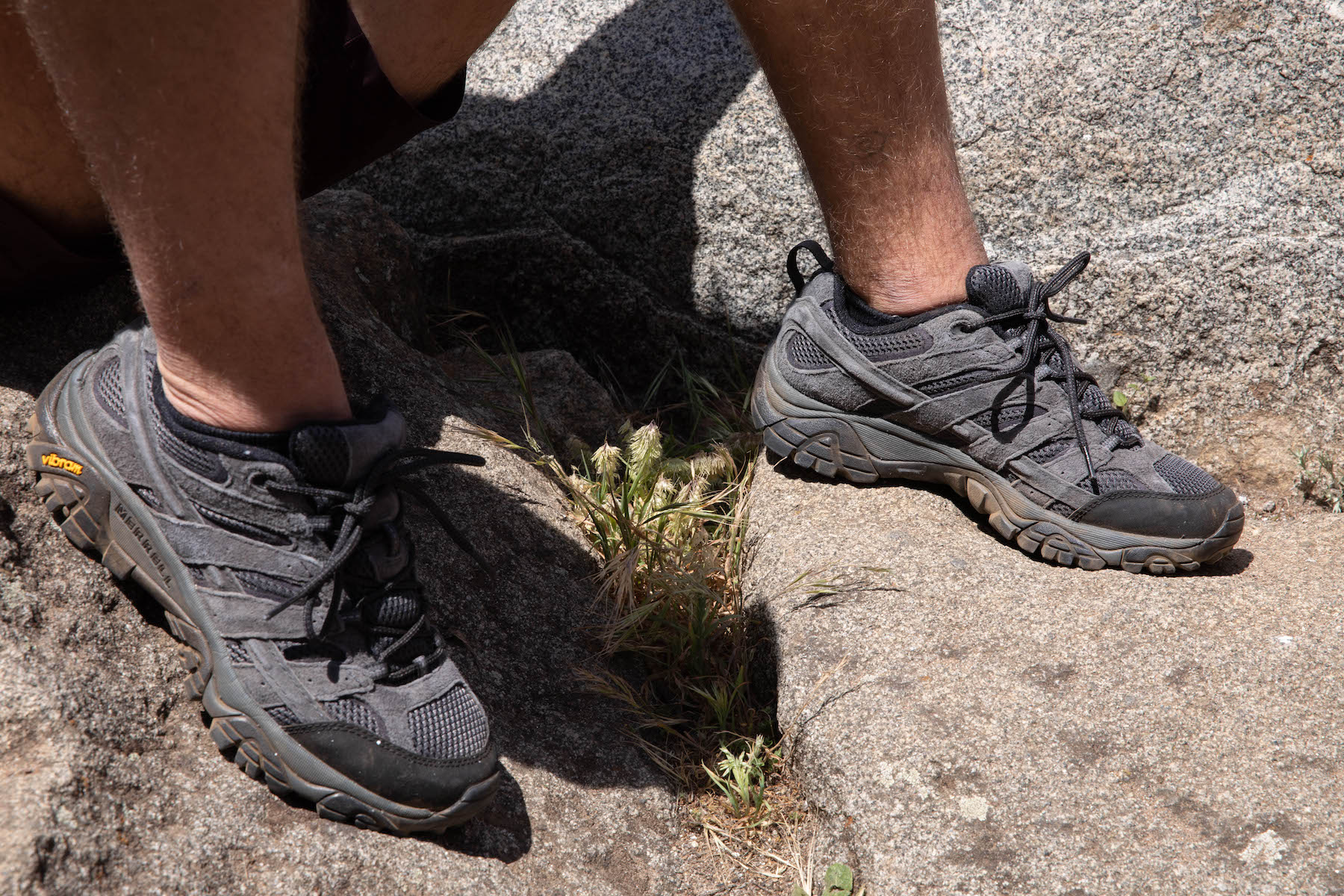 He hopes to compete again but isn’t rushing back to contests at the moment, as he wants to take a year to enjoy his climbing and plan some fun outdoor trips, such as to Black Mountain, a granite boulder hotspot east of LA. He also wants to focus on his college applications, and he’s hoping to study chemistry. When I suggest he’s bucking the dirtbag climber stereotype with that move, he’s quick to tell me climbers are actually often super-smart; it ties with that rapid problem-solving ability. “They might seem dumb at the surface as they say bro and dude a lot but if you talk to a climber they’re extremely intelligent,” he says.

In the future, Karl is looking forward to nurturing the other interests in his life, like fashion and surfing, a shift which he thinks may even help his climbing. “There were points where I dedicated my life to climbing and that crowded out other stuff and at those times I wasn’t the best climber. I was the best climber when I did other stuff as well and had a balance in life.”

He also wants to spend more time with his non-climber friends, in part so he can encourage more of them to try climbing, a mission he’s already been working on with his gay friends. “I show them climbing and they love it,” he says. “And often they’re really good at it. LGBTQ+ people are underrepresented in climbing, so if I can help bring [people to the sport] and they have fun and grow in confidence, that’s a really good thing.” 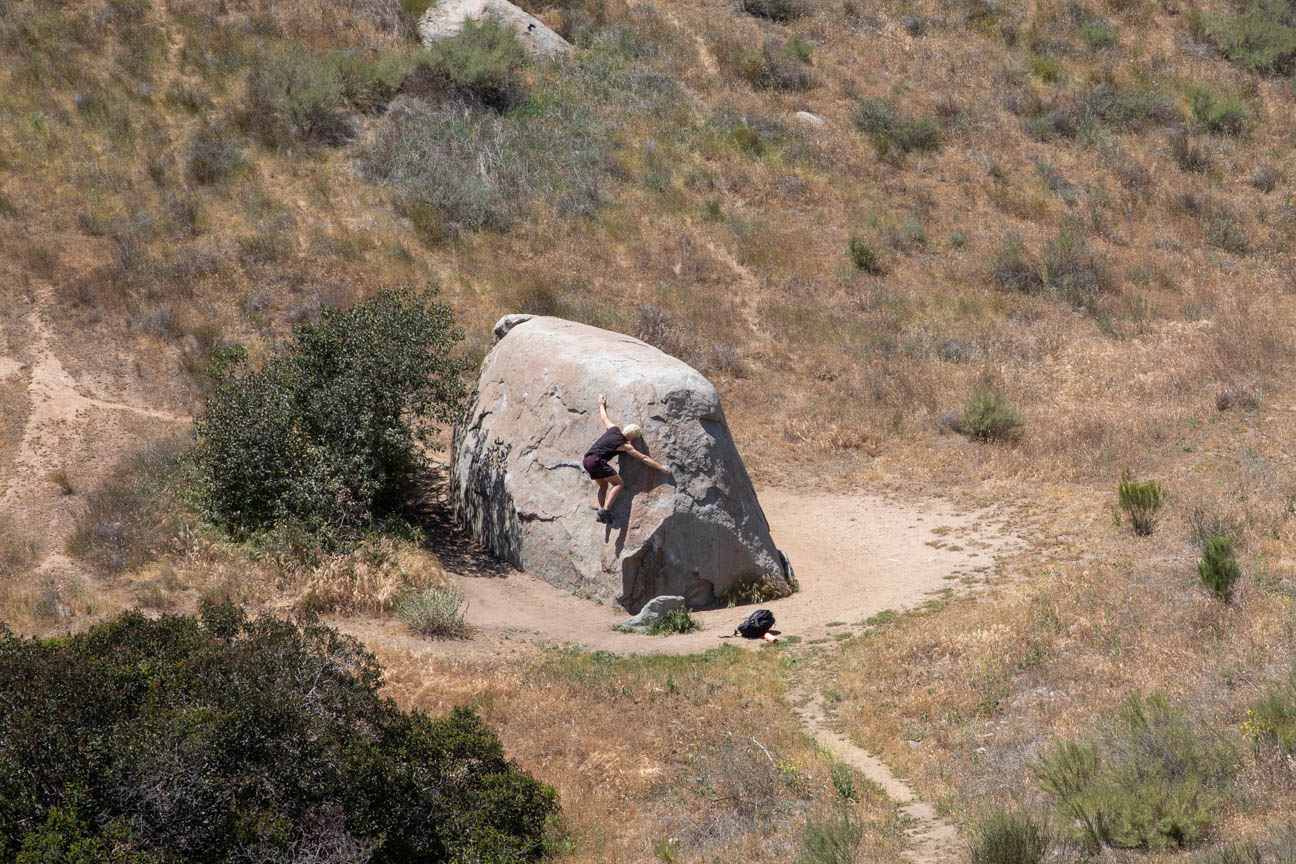 Karl wears the Moab 2 Vent from the SS21 collection – an archival model that combines a Kinetic Fit™ ADVANCED insole and EVA midsole, as well as a Vibram® TC5+ sole for increased performance and safety on challenging terrain. Available in black night, pecan and granite colourways. www.merrell.com/1trl

Linkedin
RELATED ARTICLES
OTHER ARTICLES
In the latest OFFF Dispatch, the enigmatic designer dives into his process, connecting the dots between his unique and varied creative output.
From the Yakuza to a biker gang, Bruce Gilden recounts capturing Tokyo and Osaka in the ‘90s.
In the last of our dispatches from OFFF Barcelona, Rufus Deuchler and Vincent Gault discuss the future of creative process.
The author discusses her blistering new novel about history, revolution and queer love.
A new documentary explores the government’s efforts to quash the protest movements of the late ‘60s by any means necessary.
Our new magazine is here, starring the inimitable Mitski. Order your copy now and join us on a trip around the world.