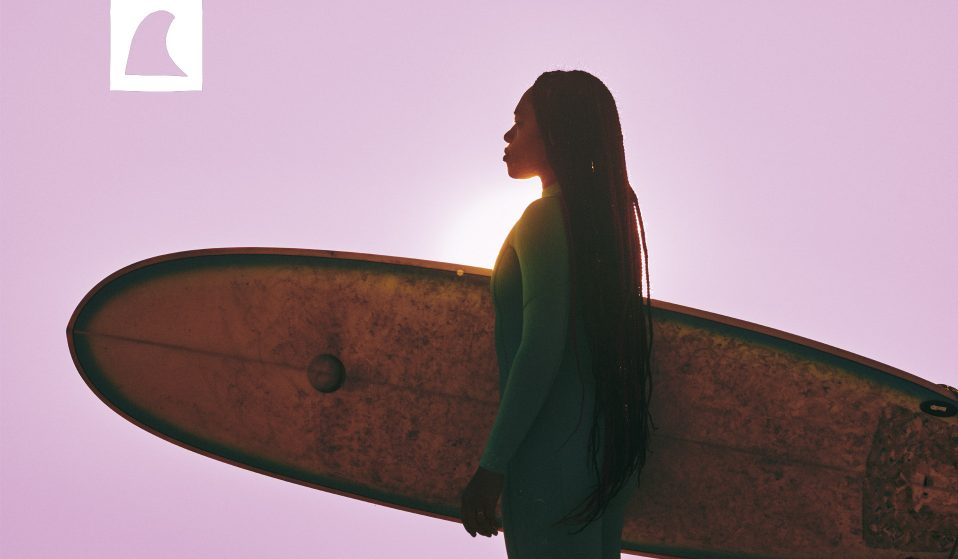 Cynthia Hicks teaches surfing to kids from traditionally excluded backgrounds, sharing a message of inclusion, water safety but above all fun – with every single ride.

Never one to let perceptions come between her and her love of the water, 34-year-old Cynthia Hicks used to be the only person of colour – and the only female – on her swim team in The Bronx. She now lives a stone’s throw from the Atlantic at Rockaway Beach and teaches surfing to kids from traditionally excluded backgrounds, sharing a message of inclusion, water safety but above all fun – with every single ride.

A swim instructor by profession and very much in her element in the water, Cynthia’s introduction to wave riding came much more recently, some five years ago. “It was a nice 2-3ft day, a group of us were out there in the lineup with these older locals that surf there every day, kinda giving us the look. So we all had it in our heads, when the set comes in, we were just all gonna go for it, whatever. I remember that feeling of gliding on the water, the wind, the little spray off the wave hitting me in the face, and I was like, “OK, this is my new addiction.”

Originally from The Bronx, when Cynthia moved out to Rockaway, a peninsula community on the southern edge of the New York borough of Queens, she was surprised how relatively few in the community were integrated into a beach-focused lifestyle. “That very first year living out here, I had to rescue a guy in the ocean. It’s devastating how many people drown in Rockaway, mainly children, always people of colour; black, Hispanic, Indian. They get no formal water education, versus kids that live more uptown on the peninsula, who literally grow up with swim training, junior lifeguard programs. The kids here are missing out, and they’re also the ones dying.” 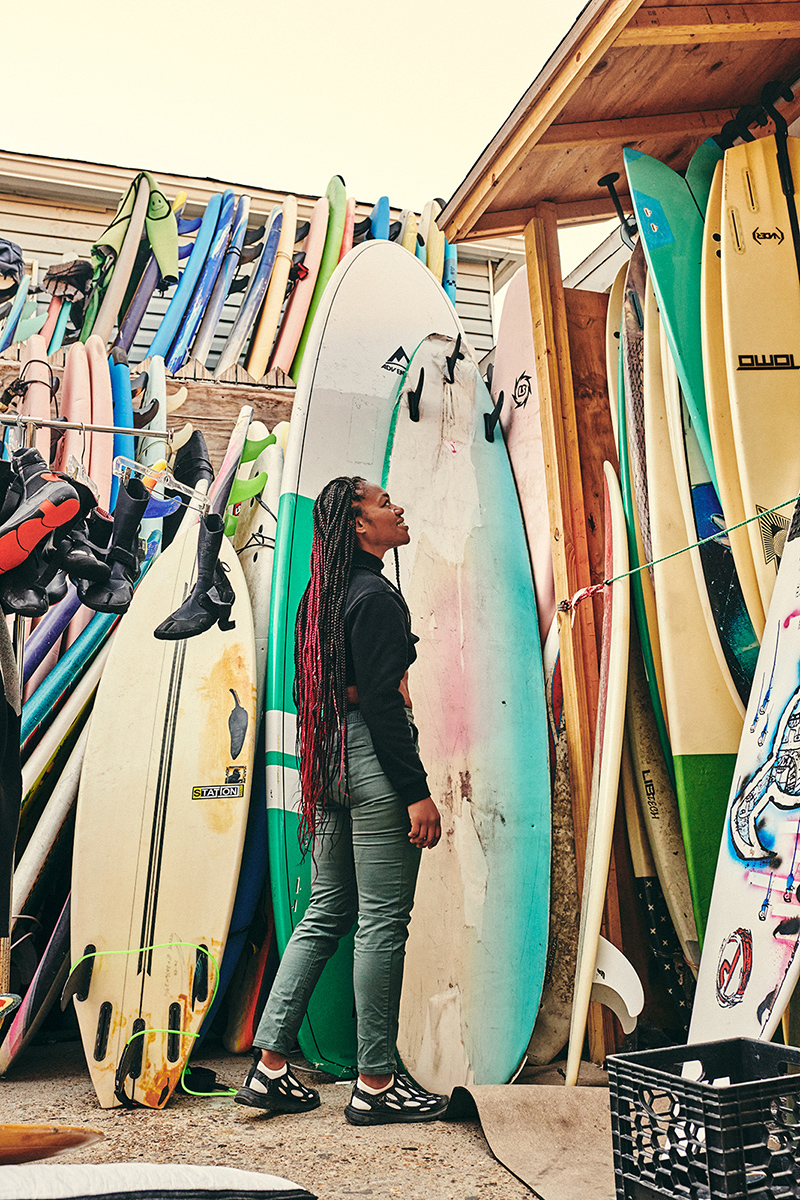 Cynthia became involved with Laru Beya Collective, a non-profit dedicated to empowering the historically excluded youth of the Far Rockaways through surfing. Having started out using her swim training background to help with water safety, last summer she qualified as a surf instructor. “People have to be comfortable before they can even attempt to learn something,” she explains. “So I’ll just start by getting them familiar with sitting on the board, I’ll wiggle it so they fall off, and then get them right back on. You have to make it fun so that they wanna come do it again — not by being a drill sergeant,” she laughs.

Being comfortable not only comes from the confidence of gaining water skills, but also by feeling welcomed and included in a relatively unfamiliar environment. “I know how these kids feel, coming to the water feeling like outsiders, because that was my experience too. In my swim team back in The Bronx, I was the only female, the only black person. I didn’t even know this peninsula existed, before I moved here. Kids from the projects or bad neighbourhoods, usually they’ll have had no chance to experience the water. Maybe their parents can’t swim, so they don’t wanna take them to the beach to learn. It’s a cycle.” 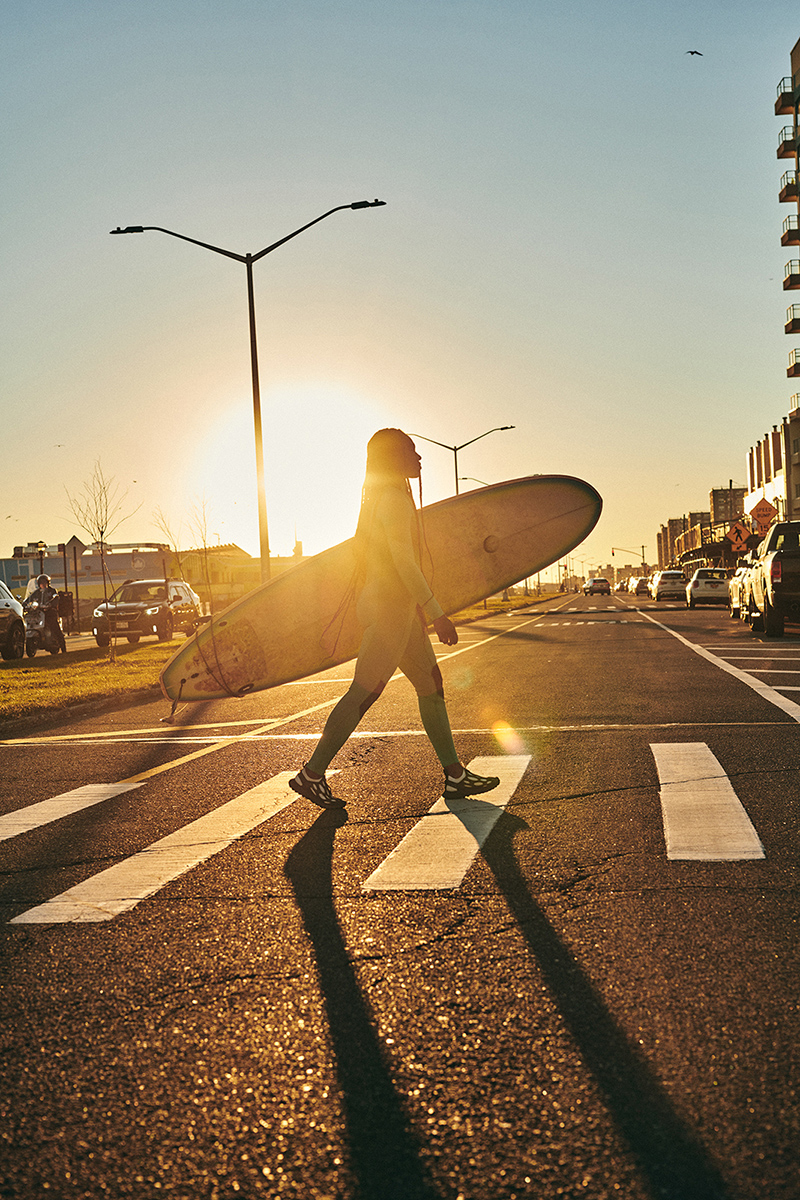 Living half a block back from the beach, Cynthia can plan a good day of surfing by splitting her time between riding waves herself and teaching lessons. She’ll likely be up early for the dawn patrol session on her mid-length board, before setting up for the kids to come out and share the stoke through education and participation. Meanwhile, storms and swells come and go, sandbars shift and life connects with a pattern of natural cycles — the deeper the immersion, the bigger the pay off. It’s a powerful hook that keeps surfers all over the world ever coming back for more, despite the discomforts of getting up in the mid winter dark, or pulling on a wet, freezing wetsuit.

As for inspiration in the surf space, Cynthia points to Hawaiian pro surfers like Nique Miller, Kelia Moniz and Carissa Moore. “Nique’s fun, stylish, but mostly effortless. I admire that because all my best waves come when I’m thinking about it the least, and just go for it.” Hawaii is the spiritual home of what’s now a truly global sport, and the history of surfing there is particularly poignant. As the islands were colonised, missionaries from New England discouraged and suppressed surfing along with other expressions of indigenous Hawaiian culture for generations. As surfing gained global popularity in the mid 20th century, its rebirth into popular culture came with a new archetype of blond Californians at the fore, rather than Polynesians. Public beaches on the US mainland were racially segregated as recently as 1968 and today, barriers still exist in other forms — less conspicuous, but pervasive nevertheless. Many places with the best surf conditions in the US and Europe tend to be affluent coastal suburbs, where the beach remains largely a white, middle class leisure stronghold. But perceptions are changing. 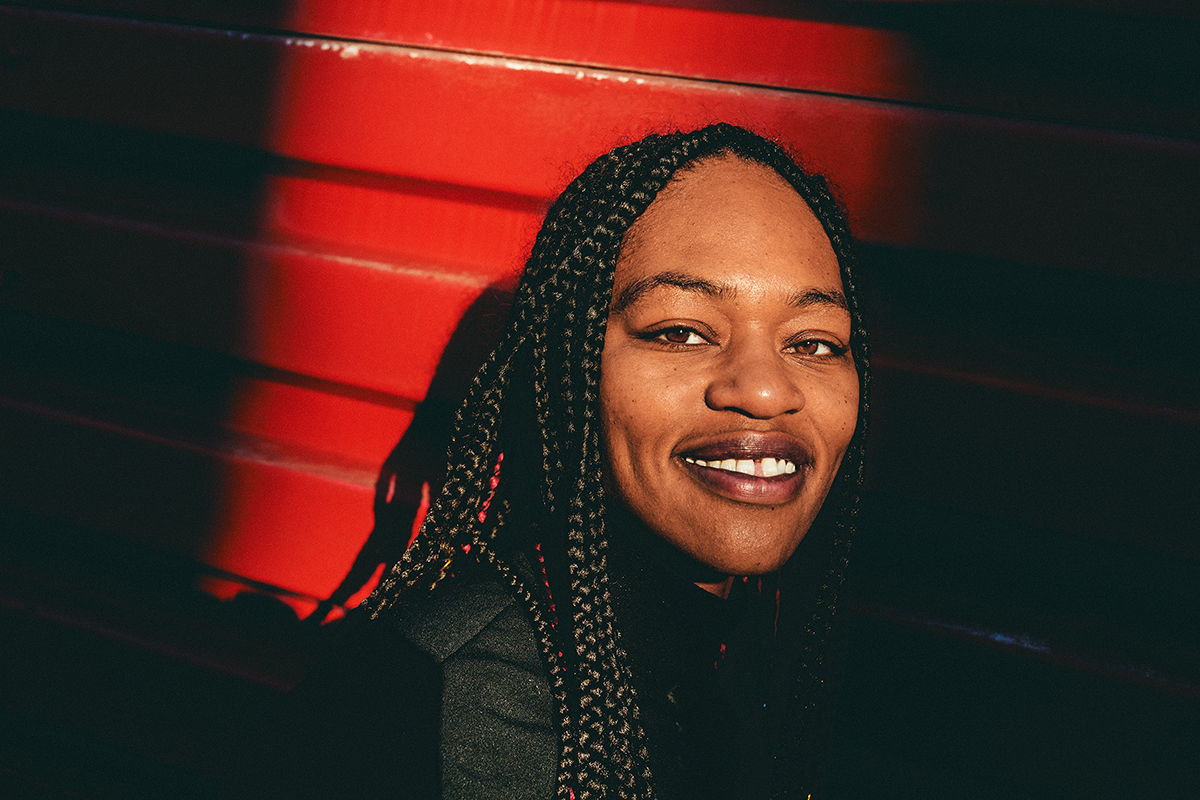 “When these kids come and put on a wetsuit for the first time, they’re like “Wow. We didn’t see anyone that looked like us doing this before.” I have a daughter, and the community that these kids have found together through the beach, the joy on their faces, it’s priceless. We’re out there, we’re good at what we do, and we’re making a name for ourselves. The children are seeing that, and it opens them up to an entire new world, one that should have been available to them, anyway. People come to us all the time saying “I wanna surf, but I can’t swim, and I wanna learn.” For the most part, it’s not white people keeping us out, it’s that we’ve not had the access, the opportunity, and that’s what we want to change.”

These days, Cynthia sees that change out in the lineup first hand, as the surfing demographic becomes ever more diverse. “There’s a lot of us now, and we’re growing every day. That first year I was involved with Laru Beya, there were maybe one or two people of colour out there. Now you can go down the beach, and just see a friend and be like, “OK let’s go surf together.” We have that cameradie, that community and inclusion.” Just as the buzz of surfing is infectious, so too is participation, as friends bring more friends to the water, and bonds are formed over epic rides and wipeouts, but mostly shared laughs. “We just enjoy our time in the water, it’s our happy place.” 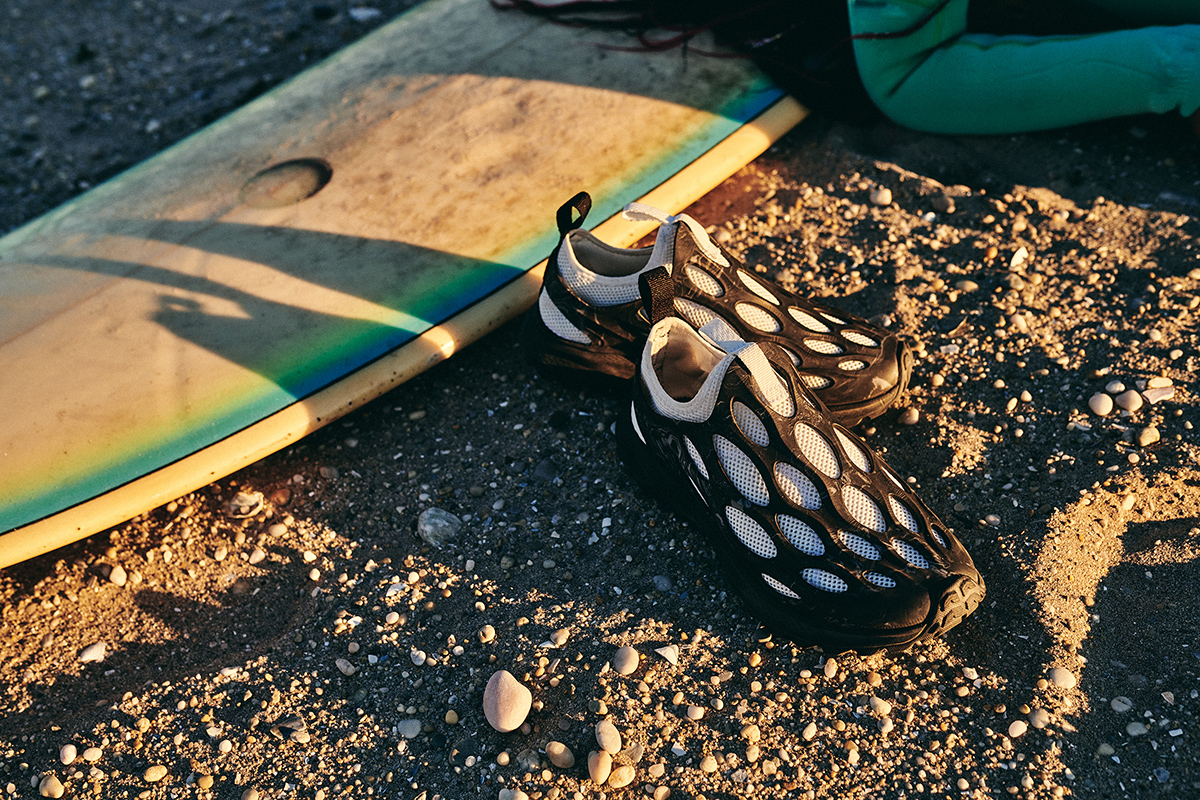 Cynthia’s hopes for the future centre on her own relationship with the waves, as well continuing to share the surfing experience as widely as possible. She’d love to travel more to some of the surf world’s iconic breaks, as well work on her cross-stepping skills – walking up and down the board as it trims. “As a person, I just aim to continue to be unapologetic about my situation.” And if she could convey a message to any kids out there who maybe don’t feel that the surf is their space? “Come ride waves, don’t be afraid, you don’t know until you try. Just go for it. Because the beach is for everyone.”

Cynthia wears the Hydro Runner in black/white. The Hydro Runner sees Merrell 1TRL veer once more from the well-trodden track, with a shoe that combines the uncompromising design of the iconic ‘Hydro Moc’ with Merrell’s trail running technology, to deliver a light-weight trail shoe that is water-ready. Each shoe features an EVA shell and

breathable mesh upper for a lightweight and flexible fit. This is combined with a lightweight high rebound EVA foam midsole for stability and comfort, and a Merrell sticky rubber outsole with durable traction for grip.

1TRL is an exclusive collection of outdoor footwear designed and curated by outdoor footwear innovator, Merrell. Sitting at the intersection of contemporary culture and outdoor performance, 1TRL introduces new concepts alongside reinterpreted classic models. Embodying the core principles of exploratory design, independent experimentation and respect for natural spaces that founded the footwear giant.

Linkedin
RELATED ARTICLES
OTHER ARTICLES
At his West Bank restaurant, Fadi Kattan established himself as the voice of modern Palestinian cuisine. Now, he’s bringing his innovative, bold flavours to the UK’s capital.
Following the release of his debut single, Deyaz talks battling addiction, dealing with his struggles through music, and building a budding music career from his living room.
After building his reputation covering the US civil rights movement in the 1960s, the photographer went on to produce some of the most enduring images of the past century.
After blocking the Scottish government’s gender recognition reform bill, Westminster is now devising further changes to the law to make it harder for trans people to self-identify.
A new film from Berghaus traces the story of Adam Raja, who left behind a turbulent upbringing to discover the healing power of climbing.
Tristan O’Neill’s shots of dancers caught in moments of reverie at the height of rave’s golden age are a testament to the UK’s legendary club culture.