News & Politics / Activism / A brief history of the Molotov cocktail 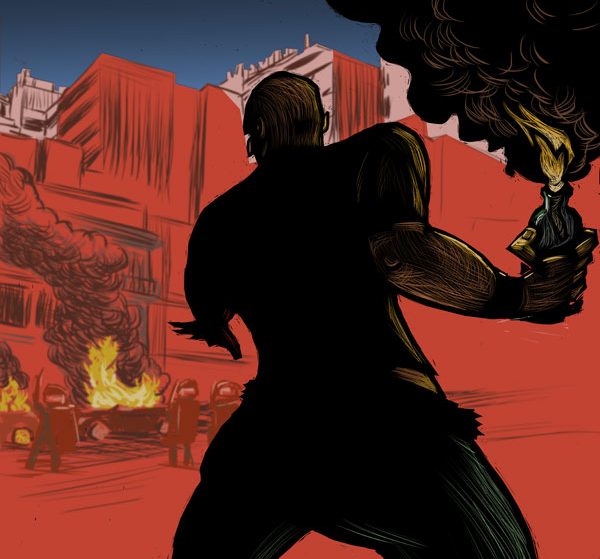 Unlike armed insurgency, a Molotov – also known as a petrol bomb – is more likely to damage property than it is to kill people. Writer James Stout considers its legacy of anti-fascist action and its unique place in protest movements.

In 2018, Dr. Mohamad Ali Kadivar published a paper exploring democratisation movements around the world from 1980 to 2010. Dr. Kadivar, an assistant professor of sociology and international studies at Boston College, found that what he calls “unarmed collective violence” played a crucial role in transitions to democracy across the world.

The paper, published in Socius: Sociological Research for a Dynamic World and titled “Sticks, Stones, and Molotov Cocktails”, isn’t a how-to guide for regime change, but it does look at the data on civil resistance and democratisation over three decades.

Its findings suggest that both armed insurgencies and peaceful protest movements are less likely to succeed in securing democracy than an unarmed movement willing to damage property and stand toe-to-toe with violent police forces.

Kadivar’s definition of “unarmed” simply means without firearms or explosives. Of the 51 mass mobilisation movements for democracy studied in the report, “8 involved episodes of armed insurgency, 38 had unarmed campaigns, and 5 transitions involved both”.

This, and other data in the article suggests, that in recent decades citizens fighting against the state have been more likely to democratise their countries by taking mass unarmed actions against property, rather than taking to the mountains with Kalashnikovs.

From the Winter War to the Arab spring, there has been a rudimentary tool in the hands of people undertaking this approach to fighting government oppression: the Molotov cocktail.

Explosive devices such as grenades or landmines contain potential energy that is released as heat, light, pressure, and sound. By contrast, incendiary devices like a Molotov only give off heat and light.

They are typically made with a glass bottle or jar, a burning wick, and a flammable substance like gasoline. You throw them, they break, fire happens. This might not seem like a big distinction, but in practice, it means that a Molotov is more likely to damage property than it is to kill people.

A grenade, on the other hand, is specifically designed to kill or wound large numbers of people and would be considered armed violence. Molotovs are part of a repertoire of what Kadivar told me amounts to “tactics used by civilians that don’t require much-advanced technology”.

Molotov cocktails have been widely used all over the world, from this year’s Greek protests at the US embassy to protesters in Iraq hurling them at government buildings. Now, with protests against police violence still raging across the US, these civilian weapons are becoming a more common sight at demonstrations in America.

Kadivar noted that the use of Molotovs was “one of the more violent or destructive examples of unarmed violence,” but given the unjustified excessive force used by police departments all over the country, it’s not terribly surprising.

But to understand why Molotov cocktails occupy such a unique place in protest movements, it’s important to know where they came from. The Finns invented the term ‘Molotov cocktail’ during their fight against totalitarianism in 1939, when Soviet forces bombed their country as a prelude to the gigantic strategic mess that was the Winter War.

The war began with a bombardment of Helsinki, which Soviet foreign minister Vychaeslav Molotov claimed was a humanitarian aid drop. The Finns, retaining their dark humor, called the bombs “Molotov’s bread baskets”. Soon everything bad was associated with Molotov: blackout curtains — used to stop bombers spotting urban areas from overhead by blocking out visible light from windows at night – were called “Molotov curtains” and bombing planes were “Molotov’s chickens”.

Within a month of the Soviet invasion, Harold Derry of the New York Times wrote: “The Finns have a rough, home-made weapon that they find very effective, it is simply a mineral water bottle half-filled with gasoline, with a stick attached like a fuse.”

By 1940, the Finnish military was calling these bombs Molotov cocktails, perhaps because they were a great pairing with the “breadbasket” bombs, or because they were churning them out on an industrial scale from liquor factories.

But the Finns were not the first to use “bottle bombs” – that honour goes to the Spanish. In October 1936, Franco’s nationalists relied on petrol-filled bottles with a rag tied over the top to fight the democratically-elected Republican government’s Soviet tanks.

Soon, fascist Germany and Italy sent huge numbers of troops and weapons to Franco, and Britain, the US, and France looked the other way.  The Republicans might not have had fascist friends to fight for them, but they did have 45,000 volunteers from around the world who were more than happy to firebomb a fascist. Just like the people Kadivar studies, these volunteers were fighting for democracy. 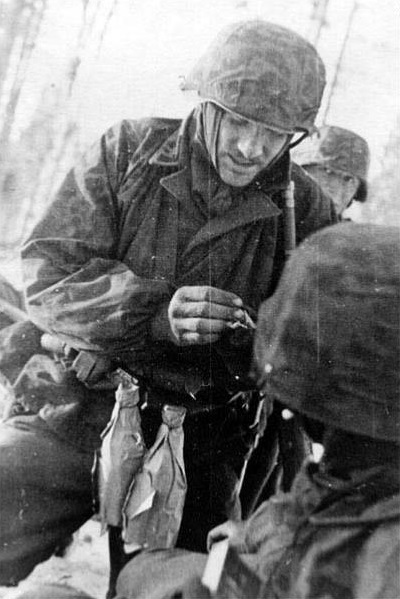 Volunteers came to Spain, often by crossing the Pyrenees on foot, as individual anti-fascists who wished to make Spain “the tomb of fascism”. In some instances, they were exiles from Italy or Germany and knew that rolling back fascism was the only way they would ever return home.

In other cases, they were British, French, Candian, American, or Chinese, and felt that even when their governments would not support Spain’s republic, it was their duty as anti-fascists to do so. These volunteers became the International Brigades, and again they made up for a lack of training with a surfeit of motivation and glass bottles full of petrol.

Their heroics would be profiled by everyone from Ernest Hemmingway to Langston Hughes. George Orwell fought alongside them as a volunteer for a Catalan militia, and they made liberal use of “bottle bombs” in their underdog struggle against fascism.

Like the Finns, the Spanish Republicans have gone down in history as heroes who fought against overwhelming odds and lost. By the time the International Brigades left Barcelona in 1938 the writing was on the wall, the Spanish Republic was doomed and with it the last hope of peacefully stopping fascism.

When the British volunteers who had fought in Spain returned home, they knew what Germany’s Blitzkrieg across Europe would look like. They also knew how to fight it: with a bottle, a rag, and a can of petrol. By 1940, the British Home Guard were training with what Pathé news called “cocktails à la Molotov… served with plenty of gusto.”

By August of 1941, the British army had mass-produced six million Molotovs under the slightly less infamous moniker, the No 76 Grenade. These grenades were never widely deployed, but they stood ready to defend British democracy from fascism.

International Brigadiers came from the US as well. Once the American volunteers arrived in Spain, they formed the Abraham Lincoln Brigades and elected Oliver Law, a Black communist from Texas, as their commanding officer.

He was the first Black man to serve as commanding officer for white US soldiers in battle. Law died leading a charge against a machine gun in Spain, but when his soldiers returned, they did so ready to fight intolerance and racism at home. In the 1960s, when the Lincolns stood up against what they saw as a war of colonial aggression in Vietnam, students up and down the country threw Molotov cocktails into ROTC buildings on their campuses, opposing a colonial war that Law and his comrades would have stood against.

In 1973, Veterans from the International Brigades joined the American Indian Movement in their occupation of Wounded Knee. For 73 days, AIM members held off the FBI and US Marshals with rifles and Molotov cocktails.

Veterans from Spain joined the Black Panther Party for Self-Defense as well, and the Molotovs came with them, burning police cars in Detroit in October, 1970. The Molotov cocktail was already a veteran of the fight against fascism and Stalinism; it fitted easily enough into the hands of the US’s civilian resistance against racism and colonialism.

Of course, bringing a weapon of war home introduces its own set of ethical issues. As Kadivar told me, the use of unarmed violence “has disadvantages for sure. The critiques of the tactics are not wrong”. But he added, “These things only become meaningful in response to the level of violence of the government. So when you compare Palestinians throwing stones with the IDF, that just doesn’t add up to much.”

Unlike peaceful protest, the Molotov cocktail and unarmed violence “is very disruptive. It captures the attention of the media and the public. That attention can go in both ways, and that can intimidate agents of oppression,” Kadivar says.

Unlike armed insurgency, a Molotov tends not to trigger massive government use of lethal force. That’s the beauty of the Molotov – it sits between protest and insurgency and communicates anger, without starting a war.

It’s a shame that Molotov cocktails are named after a government official, as they have nearly a century-long history of fighting the kind of oppression and colonialism of the kind which Molotov perpetuated. But along with petrol, every Molotov cocktail contains a little bit of the legacy of anti-colonial and anti-fascist action that it came from. And while Molotov himself is long gone, the legacy of his ill-advised assault on the Finns remains a thorn in the side of state oppression everywhere.

Linkedin
RELATED ARTICLES
OTHER ARTICLES
In our first OFFF Dispatch piece, the Arce Studio founder shares her tips on standing out from the crowd.
In the latest OFFF Dispatch, the enigmatic designer dives into his process, connecting the dots between his unique and varied creative output.
The revered showbiz chronicler recalls his journalistic beginnings, documenting subcultural scraps in the ’80s.
The failure to hold landlords to account is denying tenants their basic dignity, writes Bella Saltiel.
The government is scrapping the Human Rights Act in a move that will hit marginalised people hardest.
From the Yakuza to a biker gang, Bruce Gilden recounts capturing Tokyo and Osaka in the ‘90s.