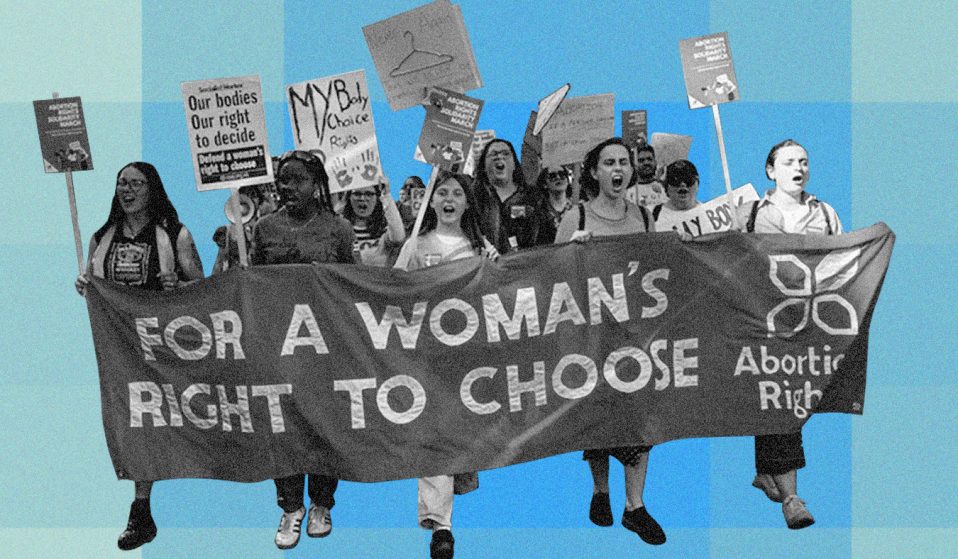 We introduce our series spotlighting the voices of people who’ve been impacted by anti-abortion laws and anti-choice protestors.

In the wake of the Roe v. Wade reversal, we introduce our series spotlighting the voices of people who’ve been impacted by anti-abortion laws and anti-choice protestors.

The first rumblings of a seismic shift in abortion rights in America came at the start of May when a draft of a Supreme Court opinion overturning Roe v. Wade was leaked to the press. The opinion, written by Justice Alito, overruled the 1973 ruling that had legalised abortion across the nation. The outrage was immediate, and ricocheted around the world. Almost two months later, on 24 June 2022, the decision was officially released and universal abortion rights in America were no more.

In the hours after, thousands of protesters marched to the Supreme Court to decry the justices’ decision – where people shouted, “This decision must not stand, legal abortion on demand” and “We won’t go back!” – with demonstrations spreading across the US. Solidarity protests also took place overseas in London and Berlin.

Since then, at least 12 states have implemented laws and trigger bans that make abortion illegal or heavily restricted, with few exceptions. At least ten other states have laws in place that pave the way to quickly ban or severely restrict access to abortion. These restrictions will disproportionately impact those with the least economic resources and people of colour.

In many ways, this new era of unsafe abortions is unchartered territory, with digital surveillance presenting novel threats to reproductive rights. Just last week, it was reported that a mother and daughter from Nebraska are facing criminal charges in connection to an alleged self-managed abortion after Facebook turned over the pair’s messages to authorities. This abortion tracking is likely to become part of other forms of criminalisation and surveillance marginalised communities face, such as racially biased data-driven policing and the surveillance of low-income people seeking welfare.

The Supreme Court ruling has been years in the making, in many ways due to the relentless campaigning of the global anti-choice movement. Huck has already reported on how the newly-emboldened movement is targeting clinic employees and patients in the US while in the UK, campaigners are currently fighting to implement abortion ‘buffer zones’ to protect clinic workers and people seeking abortions from protestors.

The global landscape of abortion is constantly in flux – a sign of how fragile these rights are, and of how easy it is for them to be stripped away. Many have rightly pointed out that Roe v. Wade – built on shaky legal foundations – would never be enough to protect bodily autonomy. The 1973 ruling galvanised anti-abortion activists, serving as a catalyst for the Christian right to get engaged in politics and to make abortion a partisan issue.

Our series Right to Choose will spotlight the stories of people who have been forced to cross state lines, denied potentially life-saving abortions, and risked their safety for fear of criminalisation. We’ll meet people who’ve dealt with abuse from anti-abortion protestors in the UK and US – either while working in a clinic, or seeking an abortion themselves. Their stories are just a handful out of the millions of people who will face devastating consequences as a result of anti-abortion laws.

Read the first piece in the series, in which a young woman who self-managed her own abortions explains how criminalisation put her life at risk, here.

Linkedin
RELATED ARTICLES
OTHER ARTICLES
For over a decade, gamblers have won big by employing people to place live bets from the court. But does this dubious method still work?
Following the announcement of an 80% hike in the energy price cap from 1st October, crowds gathered outside the offices of energy regulator Ofgem to protest and declare their intention to undertake a payment strike.
Thousands attended the annual event this year to wheelie through the city and call for ‘knives down, bikes up’.
The idea that a younger generation is abandoning work has become a popular narrative online, but it doesn’t necessarily reflect reality.
A new project is documenting formerly incarcerated people as they transition back into civilian life.
Yesterday thousands gathered outside Buckingham Palace after news of the Queen’s death broke.