News & Politics / Activism / A year after the Beirut blast, the fight for justice continues 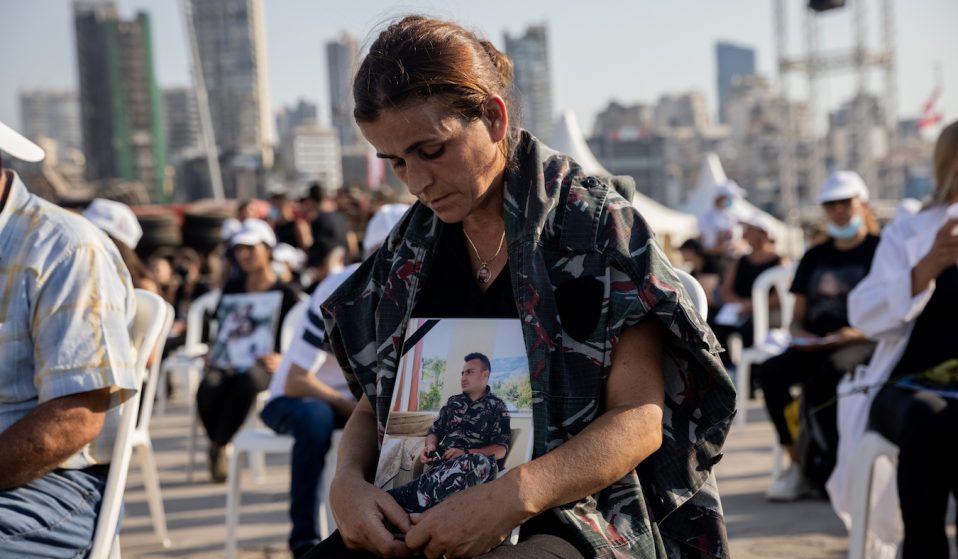 On 4 August 2020, an explosion in Beirut killed 218 people and injured 7000 others. A year on, protestors still fighting for answers gathered together.

On 4 August 2020, a large quantity of ammonium nitrate exploded in the port of Beirut, killing 218 people and injuring 7000 others. A year on, protestors still fighting for answers gathered together on the streets.

Lama, 28, along with several hundred other demonstrators, began their march from the Palace of Justice in Beirut in the searing heat of the Lebanese afternoon sun. This was one of several planned demonstrations, all coordinated to start at the same time in the capital. Speakers mounted onto the back of trucks thundered out familiar songs of uprising and revolt, as the protesters marched slowly holding up banners, and pictures of lost loved ones.

It is August 4th. A date that carries with it the heaviest weight of grief and anger. It is hard to believe that a whole year has passed since sections of the city were reduced to rubble, and the national psyche was scarred forever after the combustion of improperly stored explosive material in the port sent shockwaves through the streets, levelling buildings. 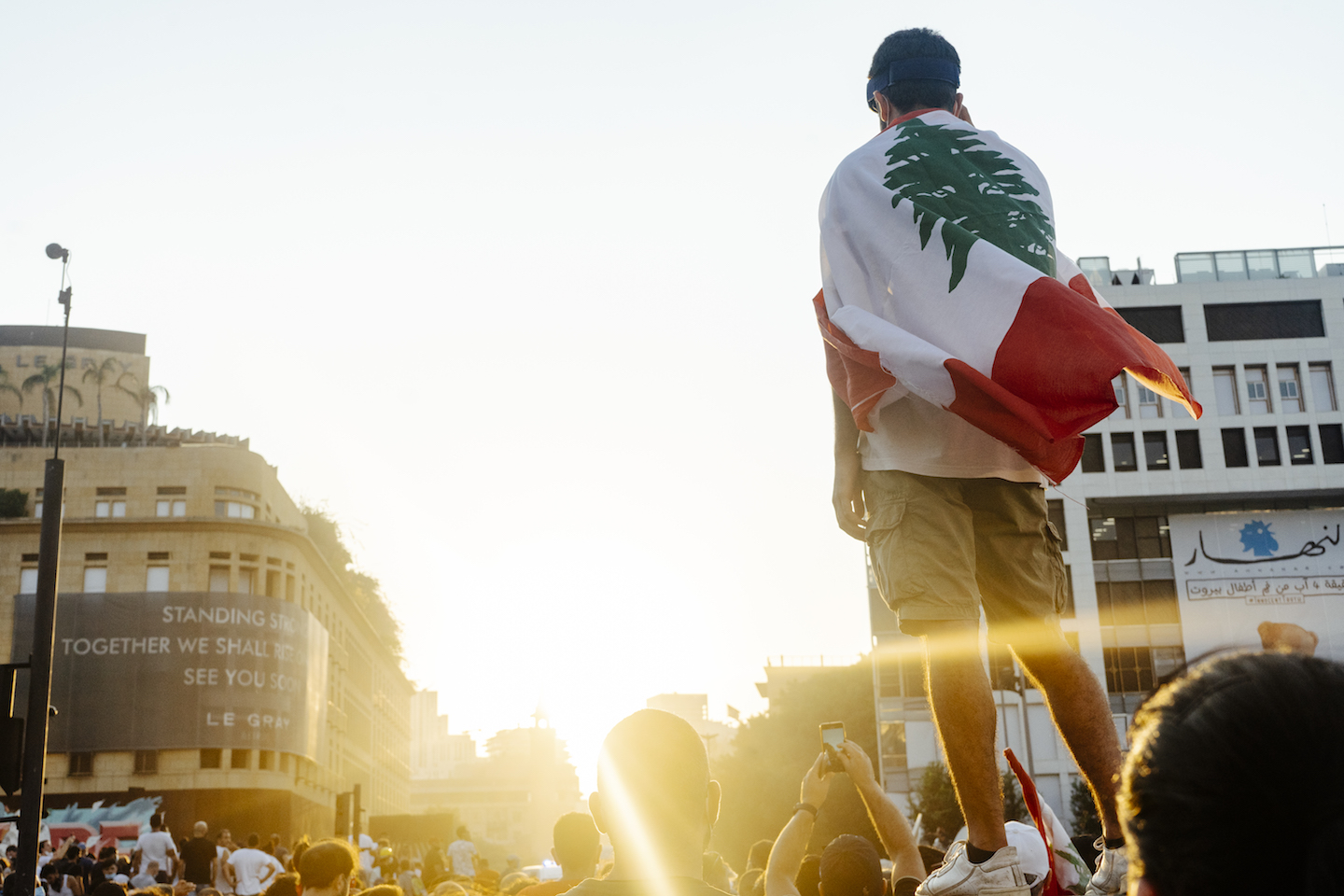 After the minute of silence at the port, large swathes of protestors made their way to Martyr Square, the scene of multiple historic uprisings in Beirut. Photo by Matt Kynaston 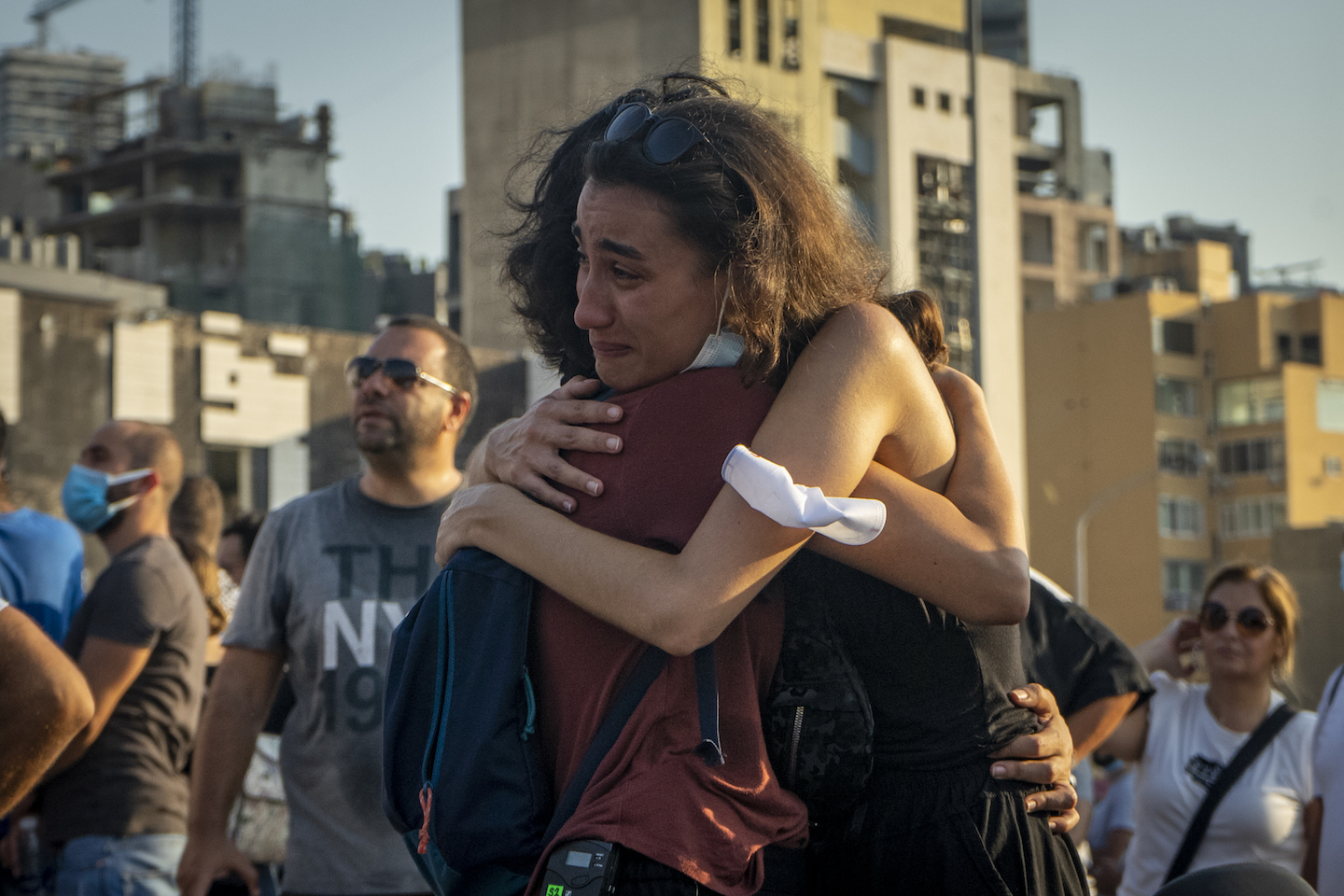 Friends embrace during the moment of silence at 6:07pm. Photo by Matt Kynaston

“We aren’t healing yet. And we won’t heal until we get justice and get our rights from the criminal regime,” says Lama, an architect and political activist.

This protest was one of many coordinated actions that were taking place around the city to commemorate the date, declared a national day of mourning. Among the crowd alongside Lama, were relatives of some of the victims whose lives were taken that day. Bereft of any sign of justice for their loss, they are angry. Their grief is often painfully displayed in the national media. Just last month, cameras had captured them being assaulted by security forces who were preventing them from protesting outside the house of a senior government minister. As the year has gone by, more evidence has come to light, implicating officials who knew that the dangerous stockpiles of ammonium nitrate that caused the blast were stored in the port for six years and did nothing to remove them.

Lama’s fate was so nearly connected with these families, and is reminded of that as she marches alongside Sarah, her sister. August 4th is Sarah’s birthday. Last year, she had been celebrating her 21st with friends in Beirut’s famous party strip, Armenia Street, in Mar Mikhael, just 600 metres away from the epicentre of the blast. “I don’t remember the impact,” she says, “but everything went completely grey, we couldn’t see each other.” 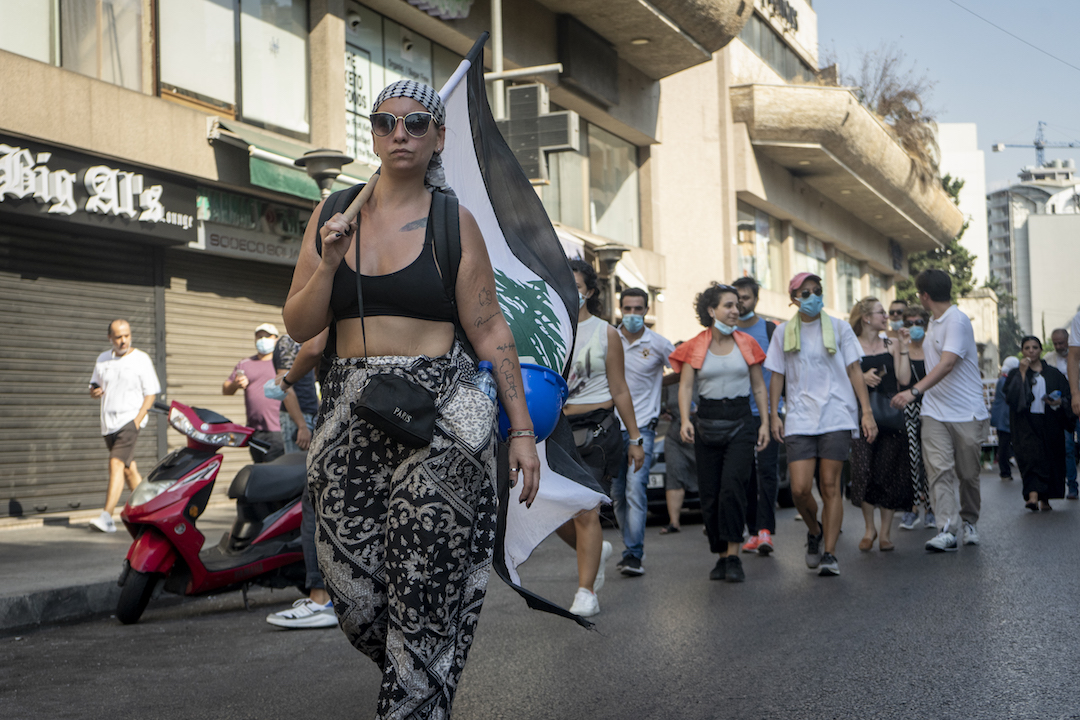 Marches and demonstrations throughout Beirut began at approximately 3:30pm. Photo by Matt Kynaston

Just up the road from Sarah, Sam – a humanitarian activist – had been on his way to deliver food parcels when he saw smoke coming from the port. He stopped to get a better look. Sensing something wasn’t right, he got back into his car just as the blast hit.

“Suddenly the car shook. My first instinct was to open the windows. I put my head down and everything blew up,” Sam remembers, pausing from marching for a moment to talk. “I just got out of the car, helped some people, checked myself. I had escaped death.”

It is impossible to convey the level of destruction in the city. Shattered glass covered every street. Cars were upturned and crushed, strewn across previously busy throughways. Entire neighbourhoods gutted out, tens of thousands of apartments instantly rendered unliveable. The hospitals that weren’t destroyed were overwhelmed with the injured and dying. 218 had lost their lives, and over 100 were missing. 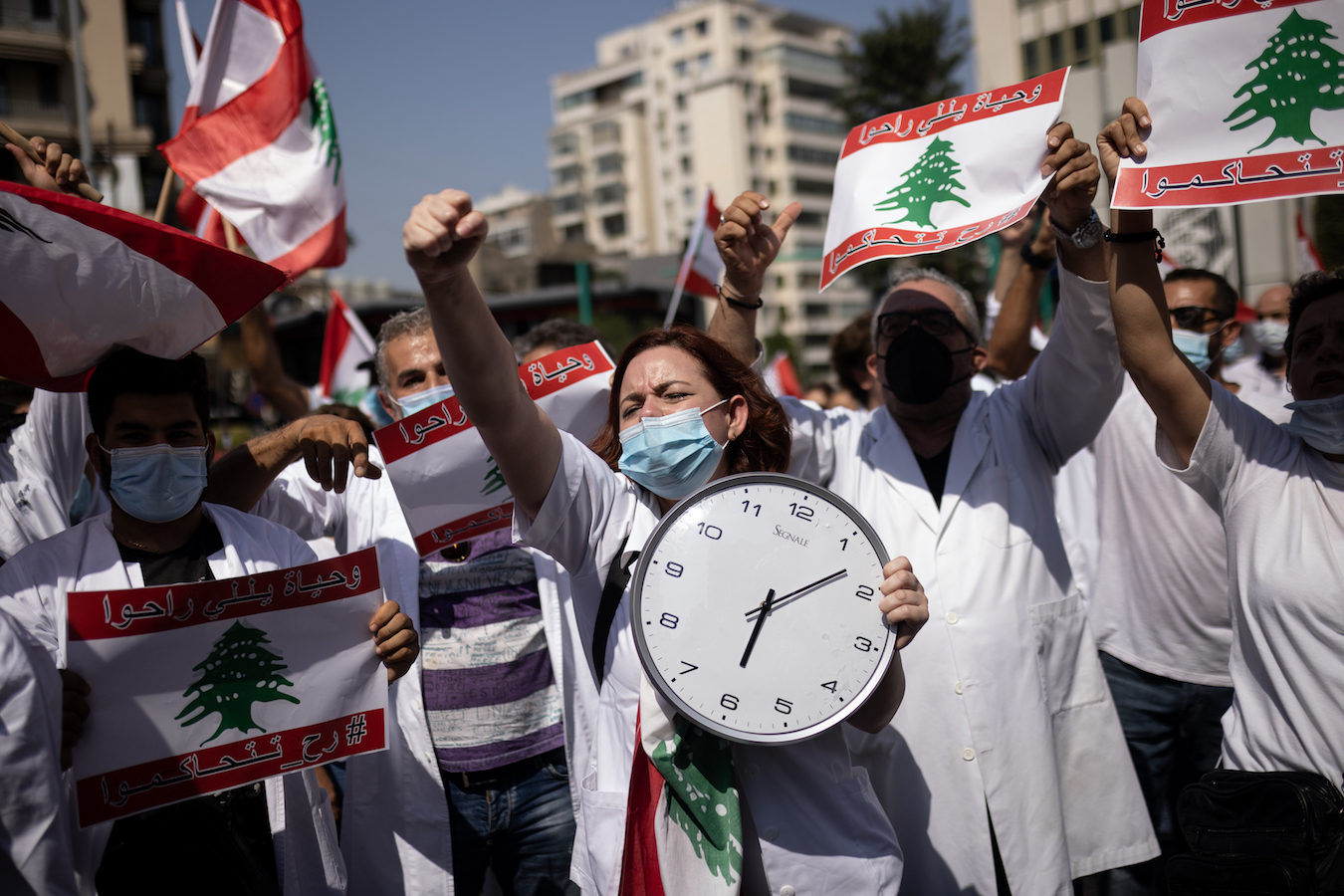 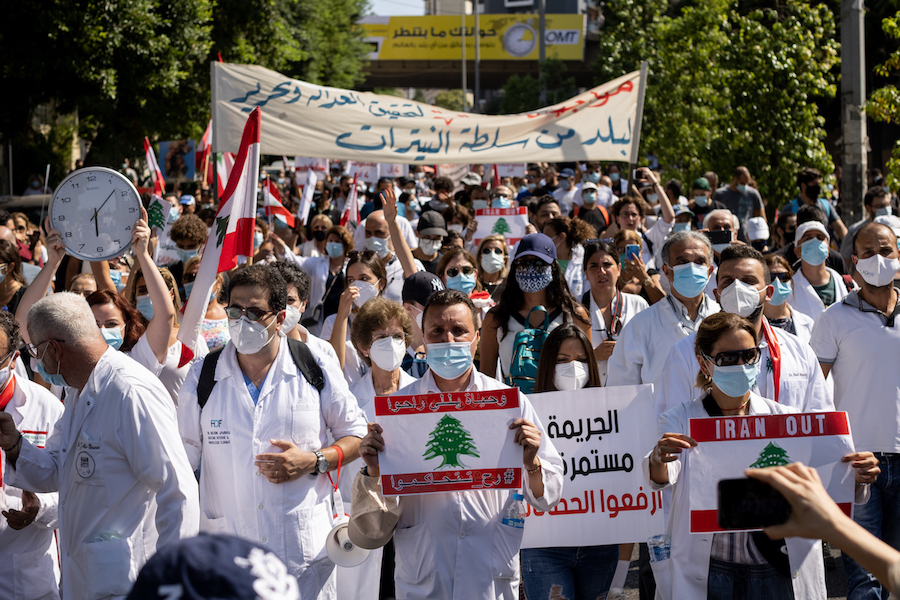 On August 5th, the sun rose on a city in shock. As people began to pick up the fragments of their lives, there was a stark and painful absence: any assistance or presence of the Lebanese government. The political class, so often accused of being inactive and neglectful, had lived up to its reputation in an unimaginable way. State apparatuses, like the army or police weren’t deployed to help with the clear up, or protect destroyed properties from theft. There was no assistance in delivering aid, housing or feeding the displaced. The clean-up was left completely in the hands of volunteers.

“The day after we created ‘Base Camp’ – it’s a relief camp” explains Sam. “It was made up of many institutions, as civil society came together and started helping people: cleaning Beirut, reconstructing and rebuilding homes, delivering hot meals and clothes.” He co-founded Base Camp, along with members of ‘Minteshreen’, a social movement which emerged from the protests of October 2019, when approximately one million people across Lebanon left their work and spilled out onto the streets. Triggered by the announcement of a tax on WhatsApp, the population was united in demanding an end to corruption and the removal of the stagnant sectarian political class that has ruled over the country for decades. “After the blast we decided to make it more of a political movement,” Sam adds.

While providing relief to some of the most affected areas, Sam and the other founders started to build the foundations of a political party, based on values and principles they had spent the previous year campaigning for: separating religion from politics, freeing the judiciary from political parties, radical environmental policy and education reform among others. 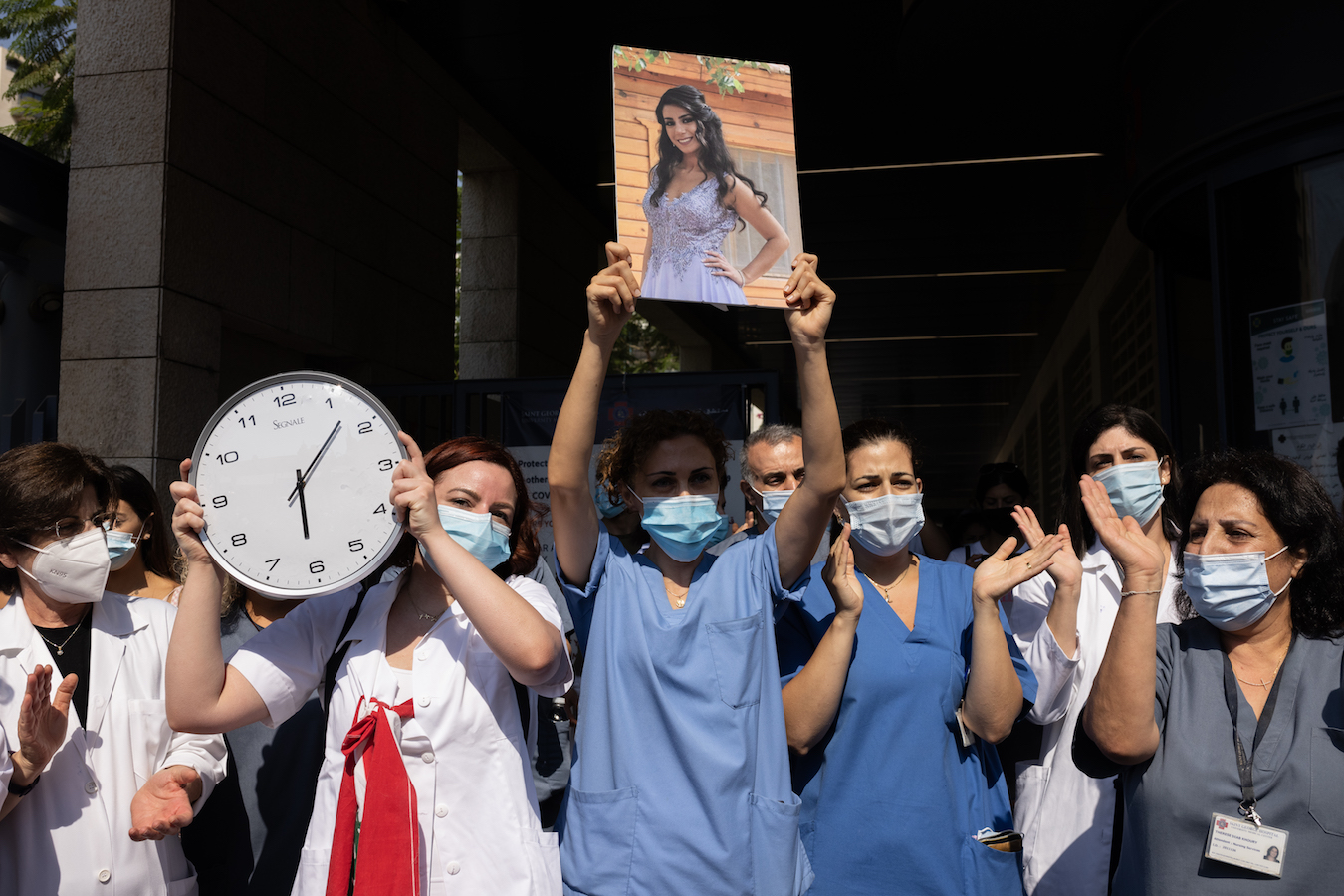 Despite being kitted out with a helmet, gas-mask and gloves for the inevitable run-in with the security forces later, Sam knows that victory will not be won on the streets. “For me, protesting every day, road closures are non-efficient at this point. Today is an important day to show up, of course. And as you see, there are so many people here.”

“But the change will happen in the elections. And you can actually see that in the university and syndicate elections. People are actually changing, they are now aware, they are choosing wisely.”

Lebanon has not had a functioning government since the blast: the last Prime Minister designate was unable to form a cabinet after months of failed negotiations with the president. He resigned last month for the third time, and was replaced by a billionaire who has previously held power twice before. Meanwhile, the country continues to slip further into what the World Bank has named “one of the most severe financial and economic crises in the last 150 years”.

With parliamentary and municipal elections not scheduled until 2022, the student and professional syndicate elections Sam mentions are the only barometer to measure public sentiment. Having been delayed several times, the syndicate elections for the ‘Order of Engineers and Architects’ (OEA) went ahead in July. These syndicates are the representational bodies for different professions, in this case engineers and architects, and have long been used and manipulated by the sectarian parties to their own advantage. In the case of the OEA, awarding construction projects to ‘friends’ as a means of winning favour and support. 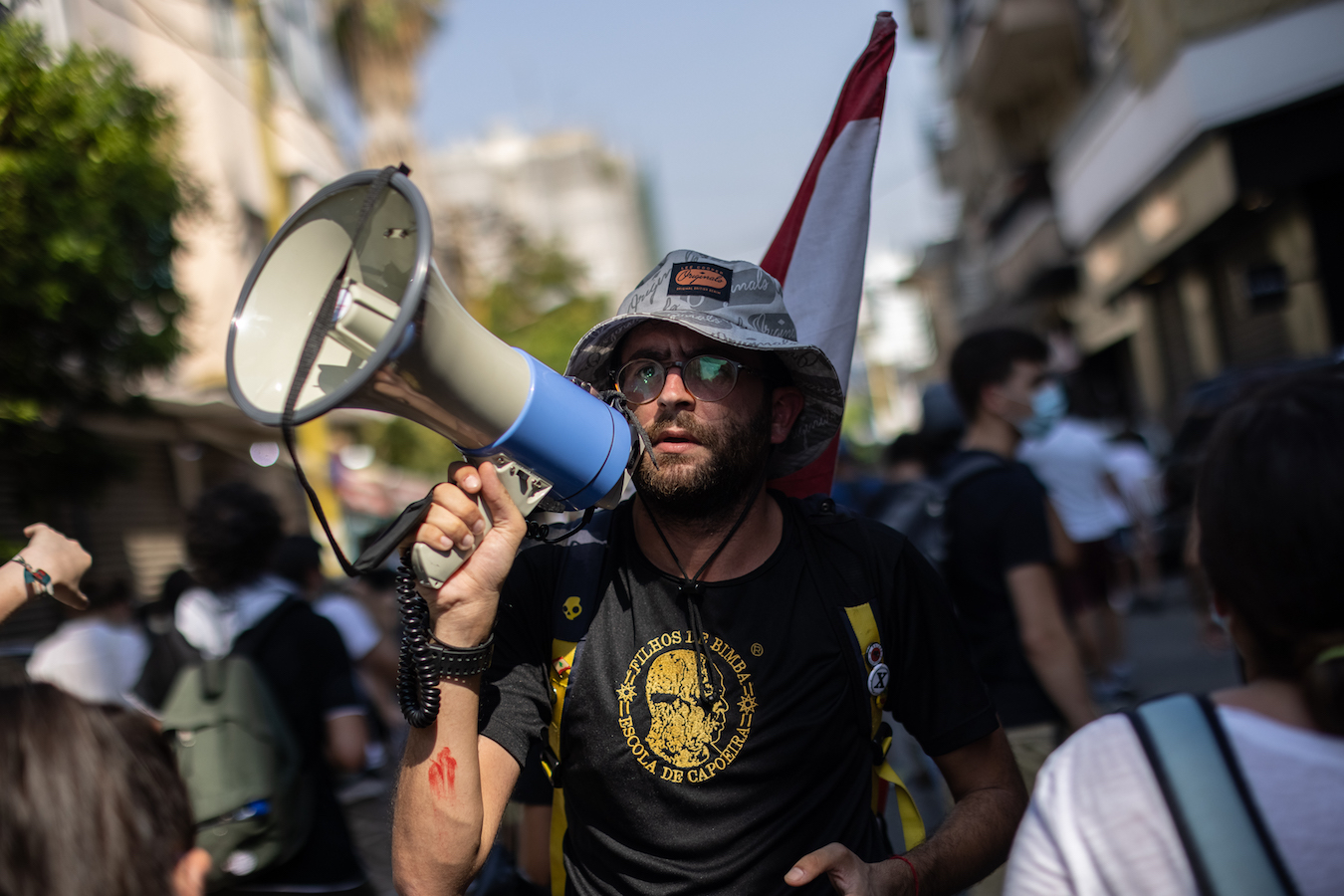 The Order of Engineers and Architects election was a resounding win for the revolutionary coalition ‘Naqaba Tantafid’ (‘The Order is Revolting’) as supported by Minteshreen among other revolutionary groups, like Lama’s party, Li Haqqi. Li Haqqi was also born out of protest movements, but came into prominence as an electoral campaign. In the 2018 elections, it was part of an alliance of parties that won 40,000 votes around the country, and 10,000 in the area where Lama lives. It’s decentralised, feminist approach was what first attracted Lama, who joined in the months after the ‘October Uprising’ in 2019.

“It has its own values and principles like decentralisation, the participatory grassroots, there’s no leaders from up to down, it’s from down to up. I like to work this way,” explains Lama.  As well as being a party with decentralised, non-hierarchical structures and principles, Li Haqqi champions values like secularism, gender-equality, social and economic justice, and accountability. “Now we are the authority in the order of engineers and architects and we have our program. So now the responsibility is to work on this program and make it happen,” says Lama.

In solidarity with the relatives of those lost, Lama and Sarah also march shoulder-to-shoulder with doctors, lawyers, pharmacists and accountants and more, all members of professional syndicates and unions who are reclaiming civic space in their professions long dominated by sectarian parties. Nurses in their scrubs hold up signs with anti-government slogans, whilst Barristers donned in black gowns steer trucks loaded with sound systems that blare out the songs of the ‘thawra’ (revolution). 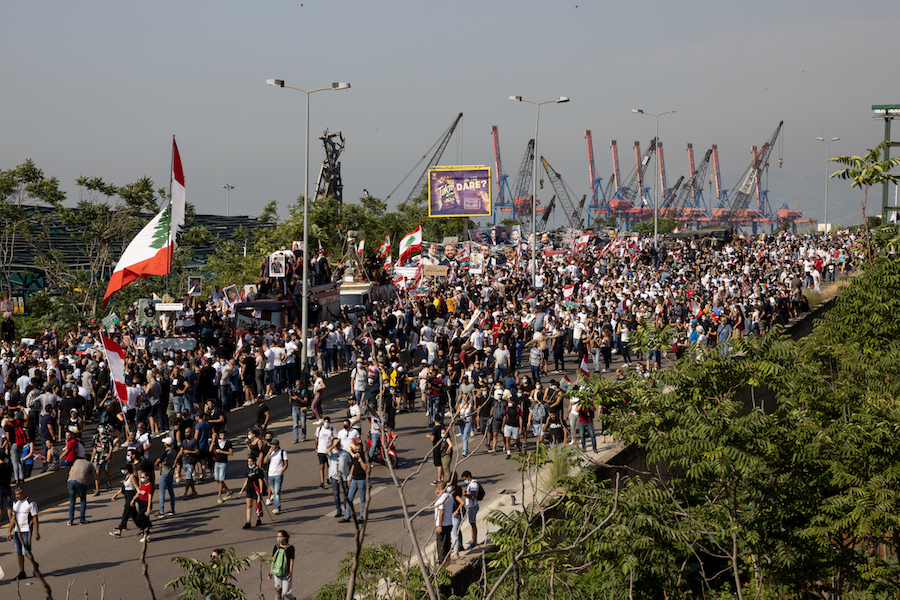 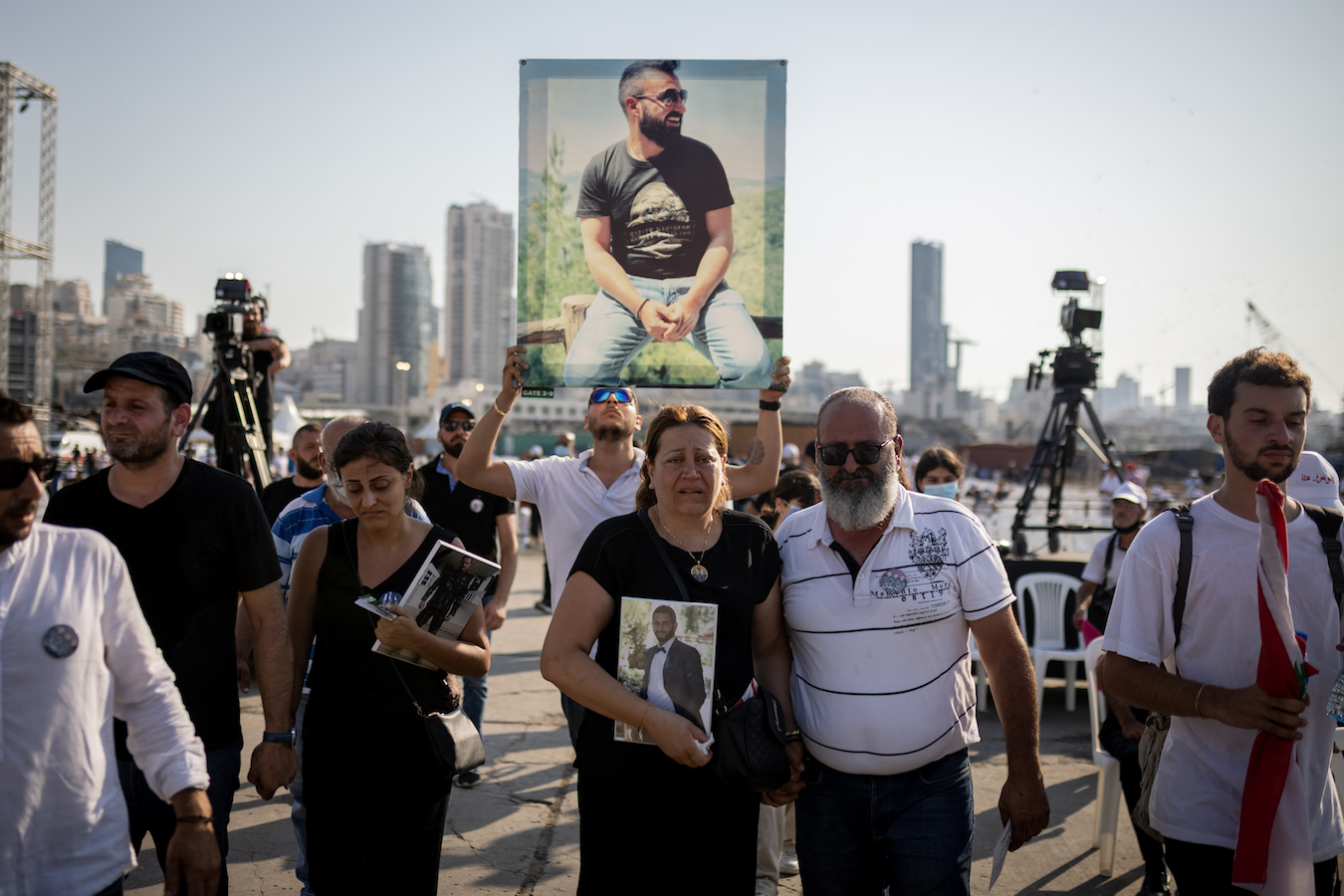 Victims of the family gather at a private memorial in Beirut port. Photo by Tom Nicholson

Both Li Haqqi and Minteshreen were instrumental, along with an alliance of other revolutionary groups, in planning the street actions on the anniversary of the blast. All the marches were scheduled so that they would coalesce at the port for a moment of silence at 6:07pm – the exact time of the explosion one year ago.

It was a sombre moment, the silence in the crowd of thousands gathered on a highway overlooking the port. They stood, some crying and holding each other under hollowed-out skyscrapers draped with signage. “Hostages of a murderous state,” one said.

After the silence was observed, Sam joined with the thousands who took their grief and anger to Martyrs’ Square in central Beirut, a short walk from the port. The setting of many historical demonstrations including when protestors occupied, and lived in tents for several months in 2019, Martyr’s Square was always going to draw crowds in the evening. Security forces anticipated as much, and protestors were met with tear gas and rubber bullets.

To think that the political wins are enough to completely turn the tide in Lebanon would be folly. But as these groups gain traction, wrestling more power away from the mainstream sectarian parties, and co-operate to keep building a viable alternative, there is momentum leaning into a vision that the likes of Sam and Lama will keep fighting for.

“Already, we have started. We are on our path and we are not going back. Everything is a step so we can take the authority from them,” says Lama. “We have to have patience, we have to have hope. It’s the only way.” 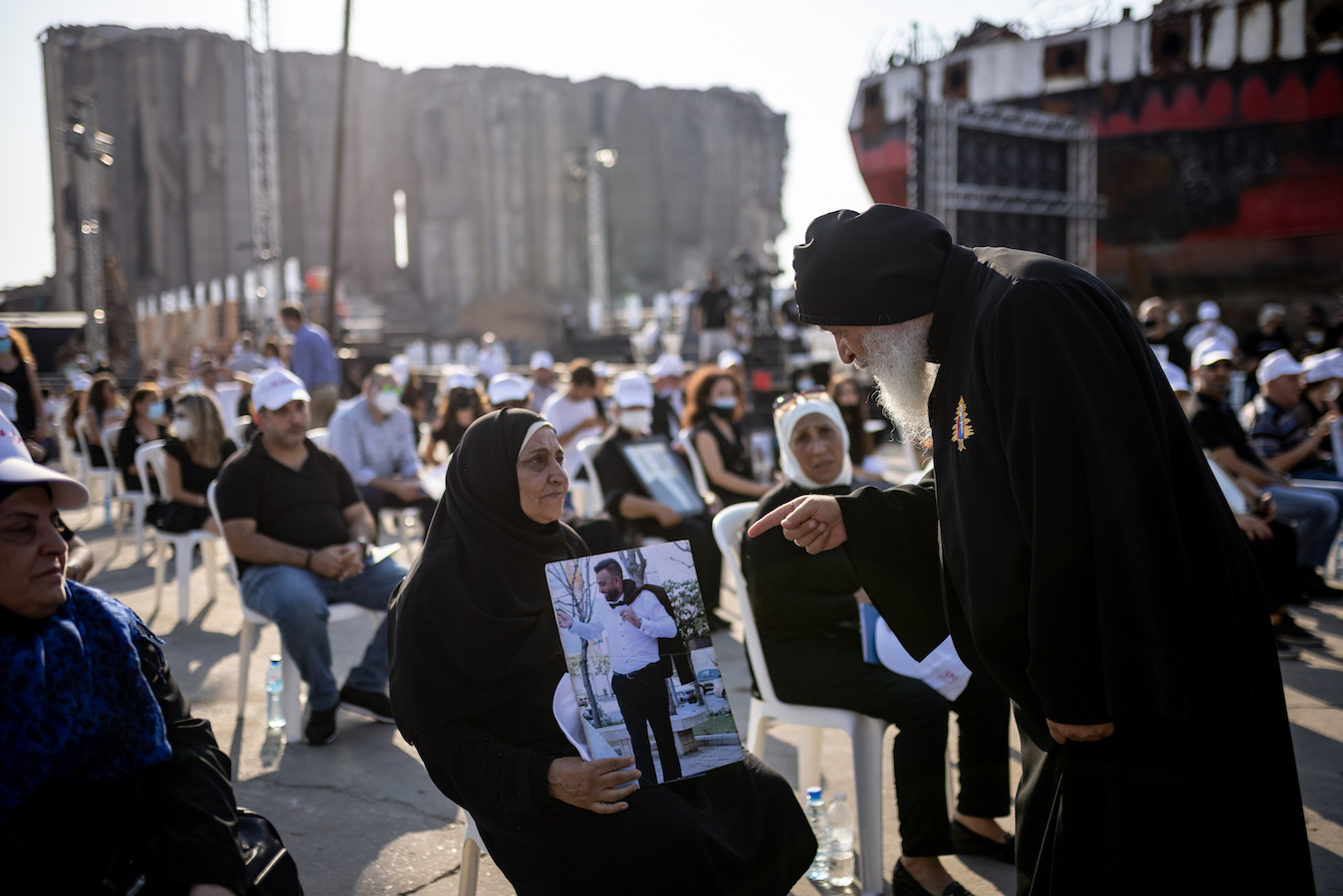 Victims of the family gather at a private memorial in Beirut port. Photo by Tom Nicholson 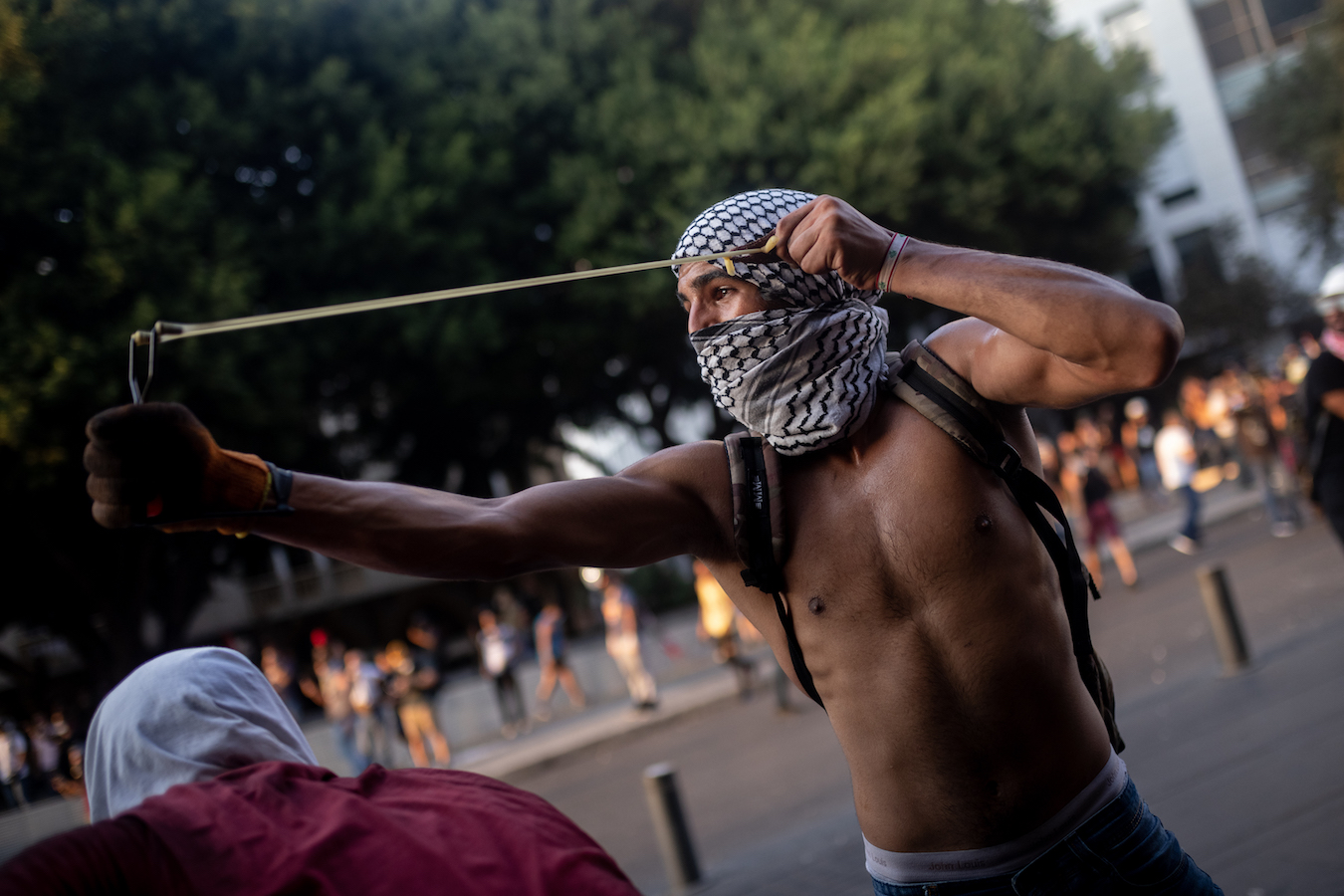 Protestors clash with police and army during a demonstration in Beirut. Photo by Tom Nicholson 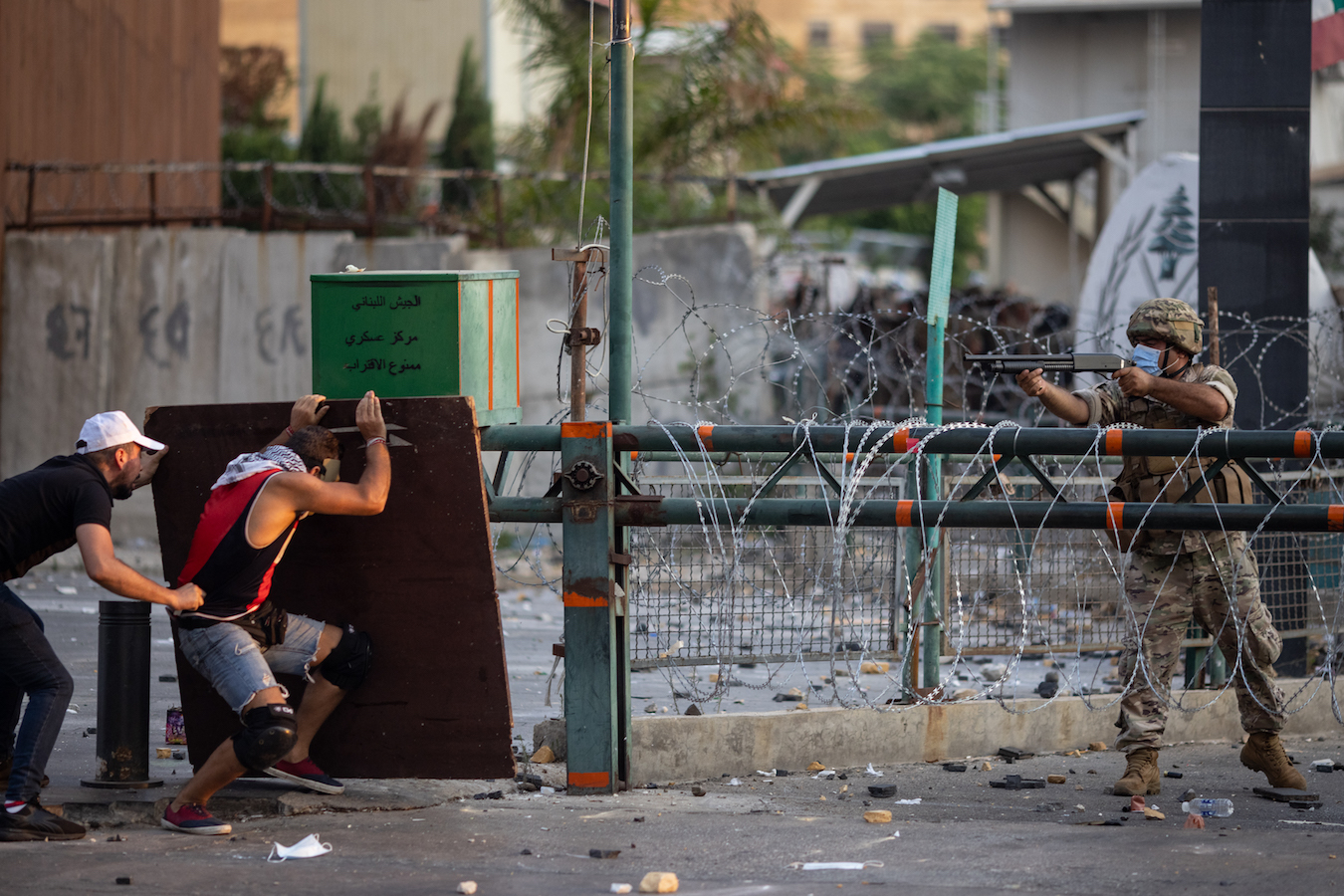 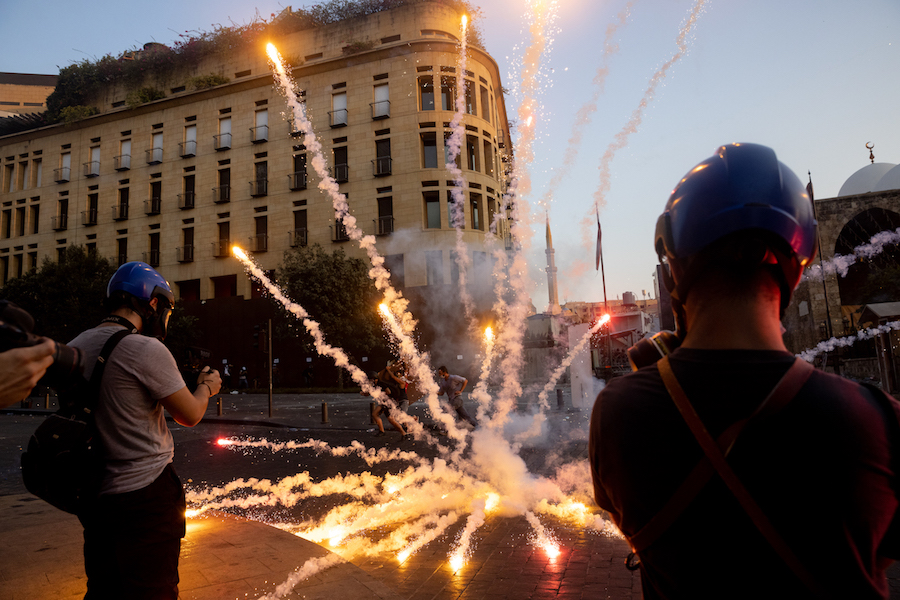 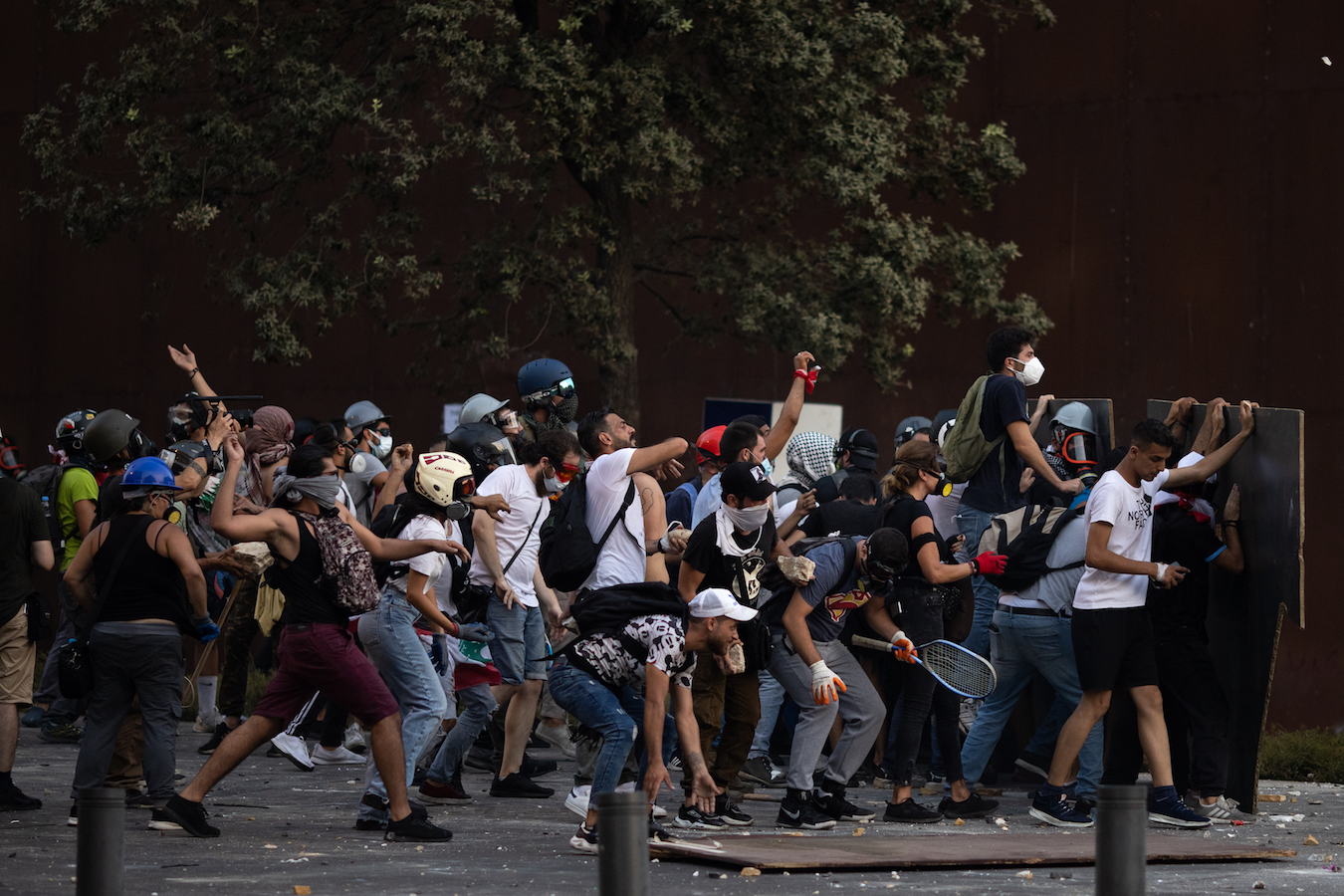 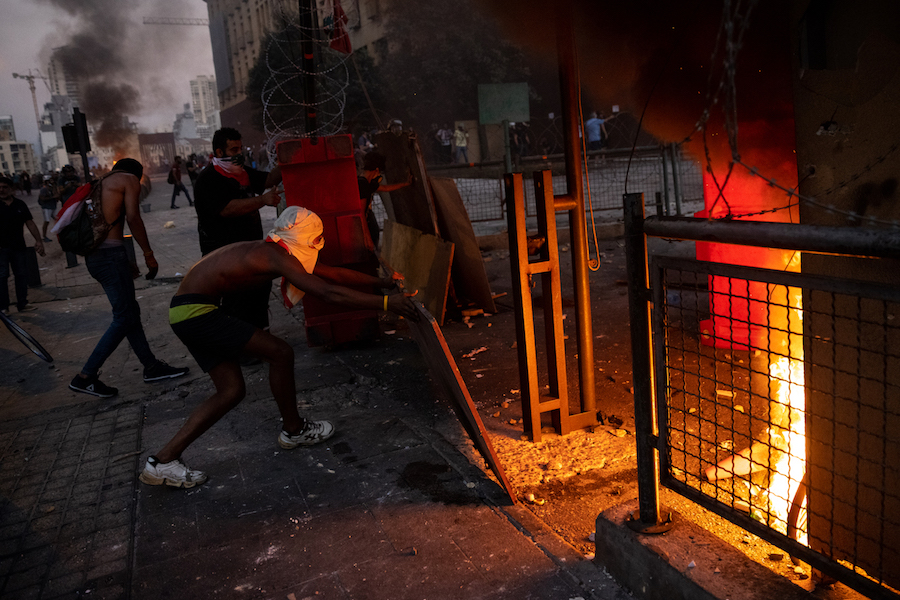 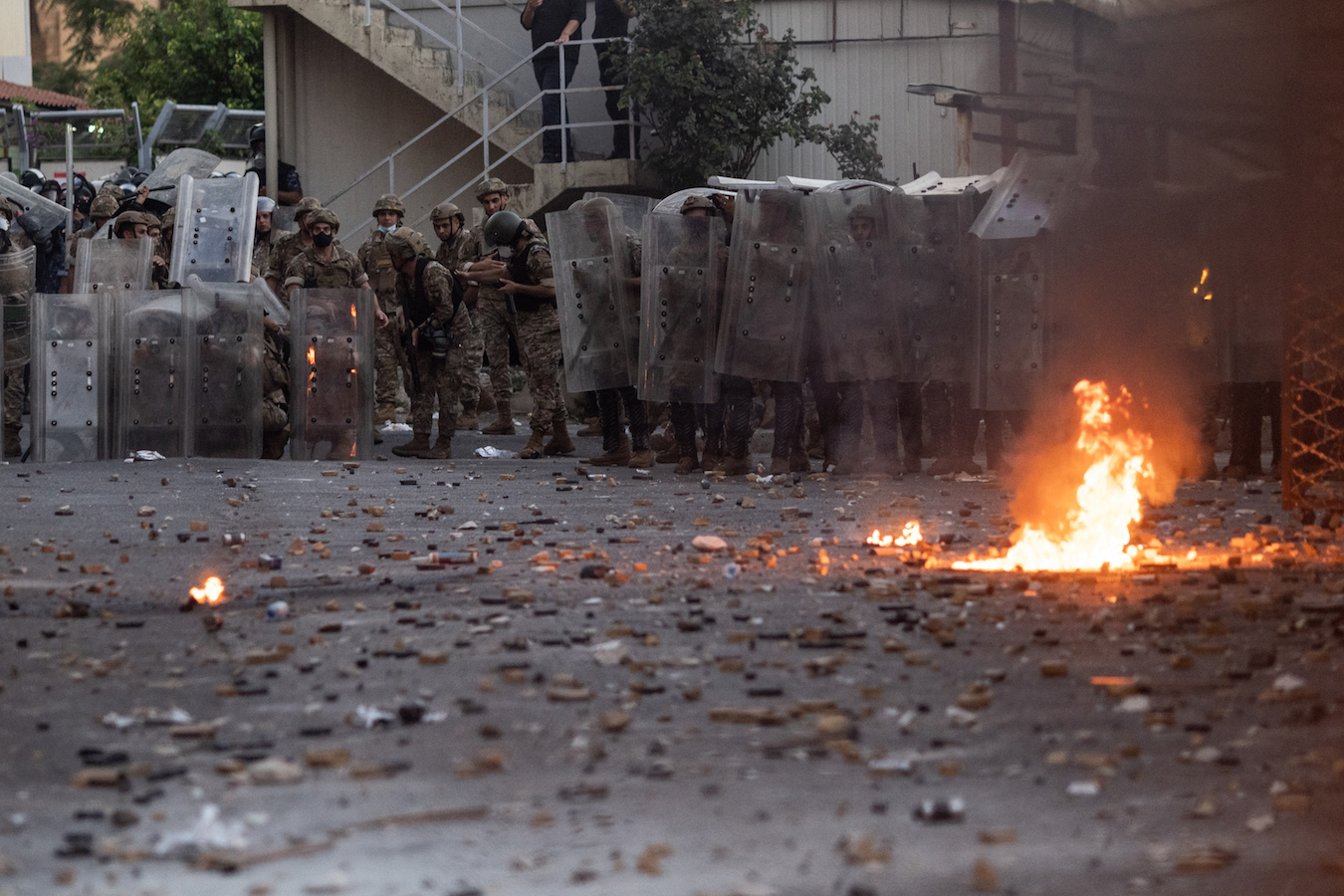 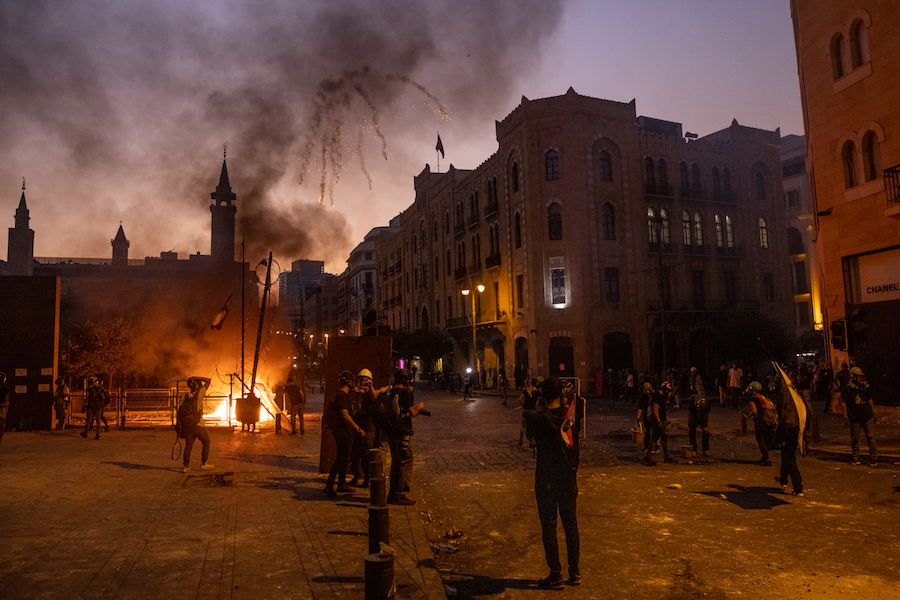 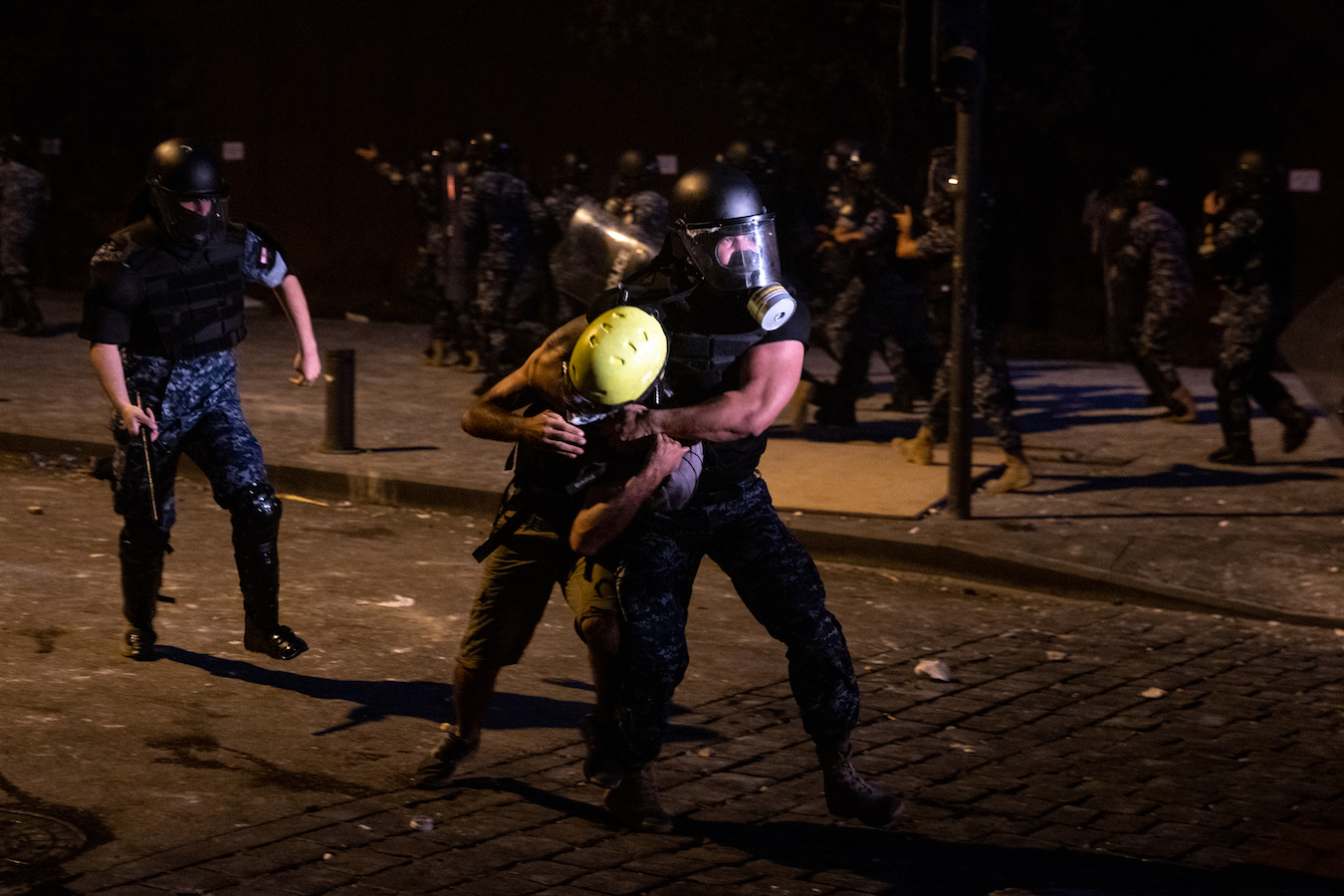 Linkedin
RELATED ARTICLES
OTHER ARTICLES
The photographer reflects on building trust with his subjects and using the street as his studio.
Photographer Melanie Nissen recalls capturing the characters, fashions and rarefied chaos of a rapidly-expanding set of punk bands who helped to redefine the genre.
The novelist discusses his electrifying debut, which offers a deft examination of masculinity under late capitalism.
Photographer Alice Mann reflects on capturing the camaraderie and discipline it takes to succeed in a highly-competitive sport.
From Brooklyn gang members, to Welsh miners and the residents of East Harlem, Bruce Davidson used his camera to shine a light on the most marginalised.
In 1984, Martin Shakeshaft set out to document the miner’s strike as it really happened, using his photography as a tool for activism.