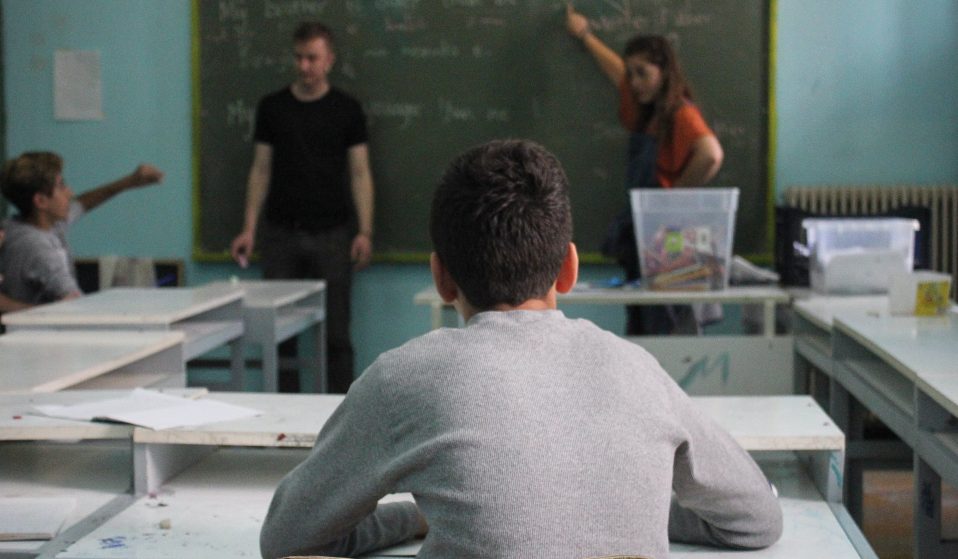 In an abandoned school in the heart of the city, hundreds of families are surviving without official support, funding or paperwork.

In an abandoned school in the heart of the city, hundreds of families are surviving without official support, funding or paperwork.

Jasmine is a large building that sits in the centre of Athens like a great marooned ship, turning an ever-darkening shade of moss green. At first glance, it looks like a regular school – but over the past two years, a few tell-tale signs have emerged that it may no longer be what it seems. Laundry bursts out of windows and hangs from the building like bunting. The children play with shopping trolleys and deflated footballs, while adults sit watching – some talking, others peeling potatoes or sitting in silence, smoking cigarette after cigarette.

Refugee arrivals to Greece are on the rise again. Official camps are often overcrowded, unsafe and inhumane, especially on the islands. But for those who manage to make it to Athens, there is another option. Jasmine is one of several refugee squats that have sprung up in former public buildings, hotels and office blocks left abandoned after the recession and government austerity cuts.

Refugees re-opened the building in 2016 and converted classrooms into dormitories. With no official funding, living conditions are extremely tough. Yet, for families who have slipped through the net of an overstretched, under-resourced and complex asylum system, this school-turned-squat provides a lifeline. And as winter bites across the region, it’s better to be here than a freezing tent, which is the reality for many of the 14,400 people still held on the islands. 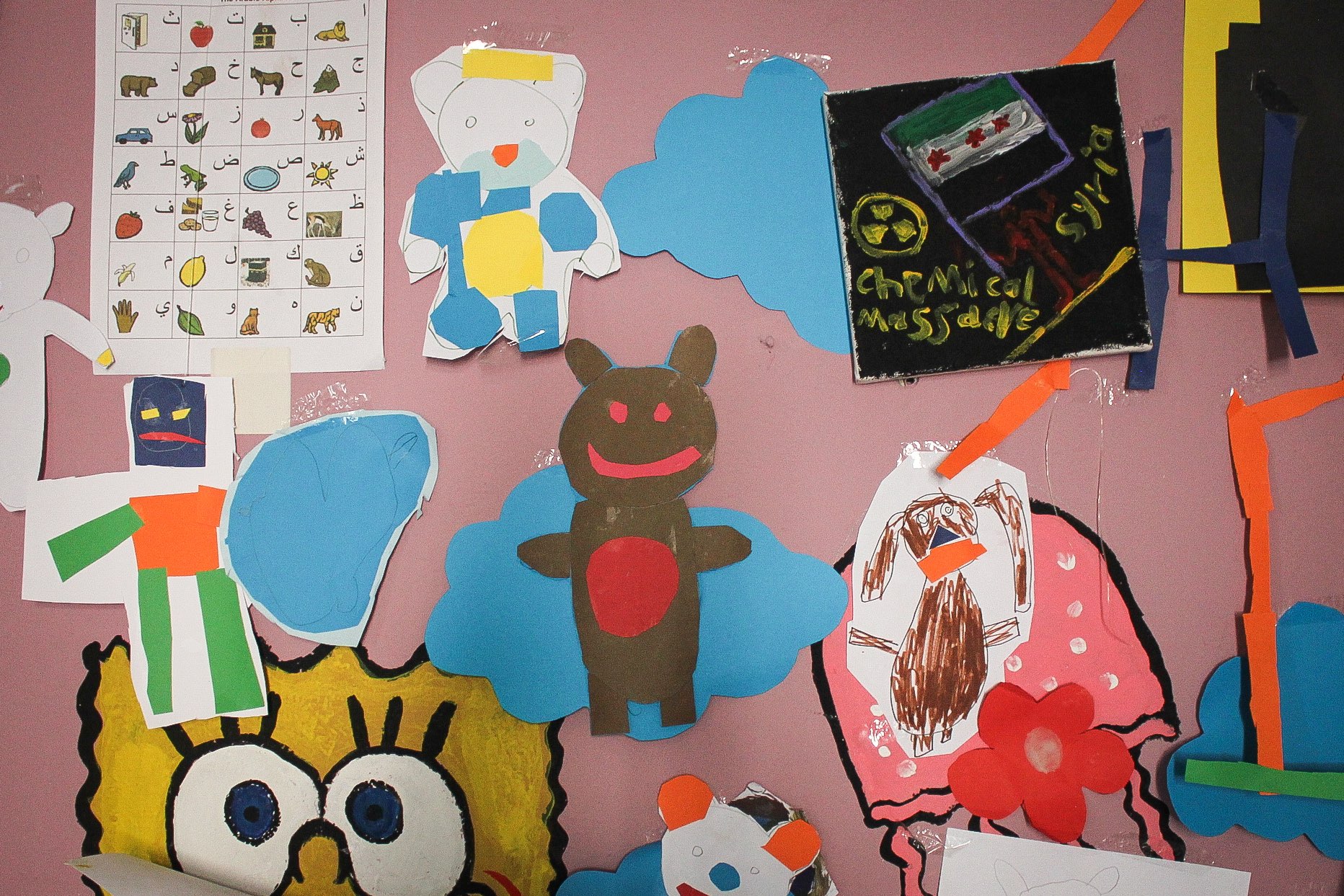 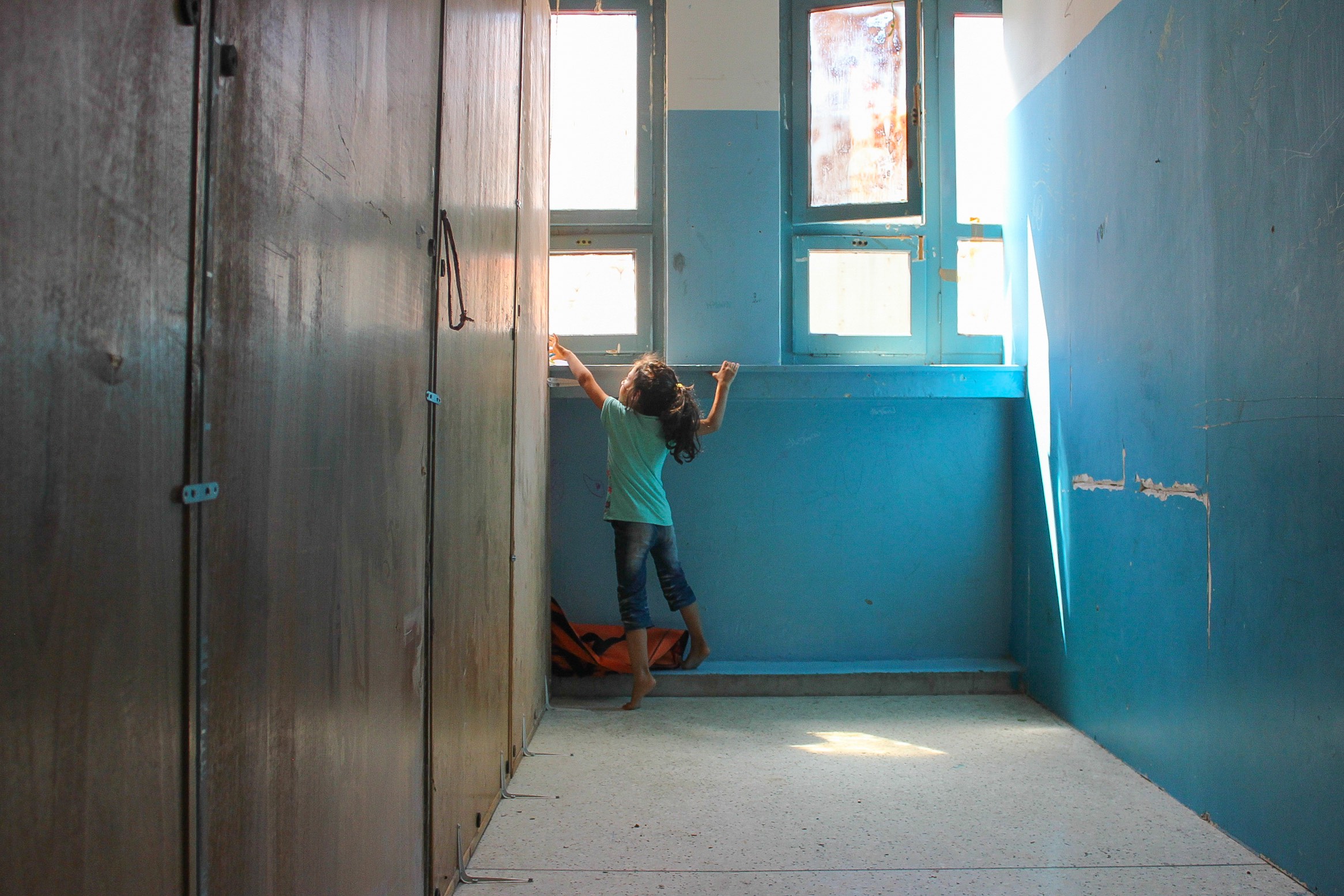 At the start of 2018, Jasmine was under the control of a shady group of men who huddled around a fire in the corner of the playground and preached a hard-line breed of Islam. Residents claim they were selling on aid donations and enforced their strict rules with violence. They patrolled the corridors, one night beating a 16-year-old boy from Syria for wearing a pair of shorts on his way to the bathroom. Most residents were afraid to leave their rooms.

Hoping to escape this oppressive reign, residents notified another local squat, who demanded the group leave. Things got violent, but after the second attempt, finally they were gone. By the end of January, the playground was full of flying balls and screaming children. Inside, families were free to roam the corridors again. A plan for repairs was drawn up and vital maintenance work began.

Struggling through the worst economic crisis in the European Union’s history, Greece’s ability to manage the refugee crisis has been much-criticised. Squats like Jasmine are some of the few places where undocumented people can find accommodation with no questions asked. Hesham is one of them, hailing from Deir ez-Zor in Eastern Syria, which was overrun by ISIS in 2015.

Hesham decided his best hope of successfully claiming asylum was to avoid the compulsory registration in Greece and, after spending months stuck behind the school gates, he paid a smuggler €4,500 to go west. The smuggler stopped answering his calls. One night, Hesham went to find him and came back to Jasmine with bruises all over his face. Resigned to never seeing his money again, he turned his attention to setting up a children’s school in the squat.

“It is not just English they need to learn, it is respect and good behaviour too,” Hesham explains, sitting in the school’s old office; a room full of mismatched chairs, empty filing cabinets and stacks of coffee cups full of ash. He has a huge smile that stretches wide across his face, an impressive collection of colourful scarves and his eyes are always wide open in fascination – wherever he is. Hesham is widely liked by all, and his good level of English enabled him to take a role of responsibility in the squat. He unlocks the school library every day and improvised lessons offered by volunteers begin at 11am.

“The most important thing is the children’s education,” he says. “First, we start with the kids’ school and then we deal with the rest.” 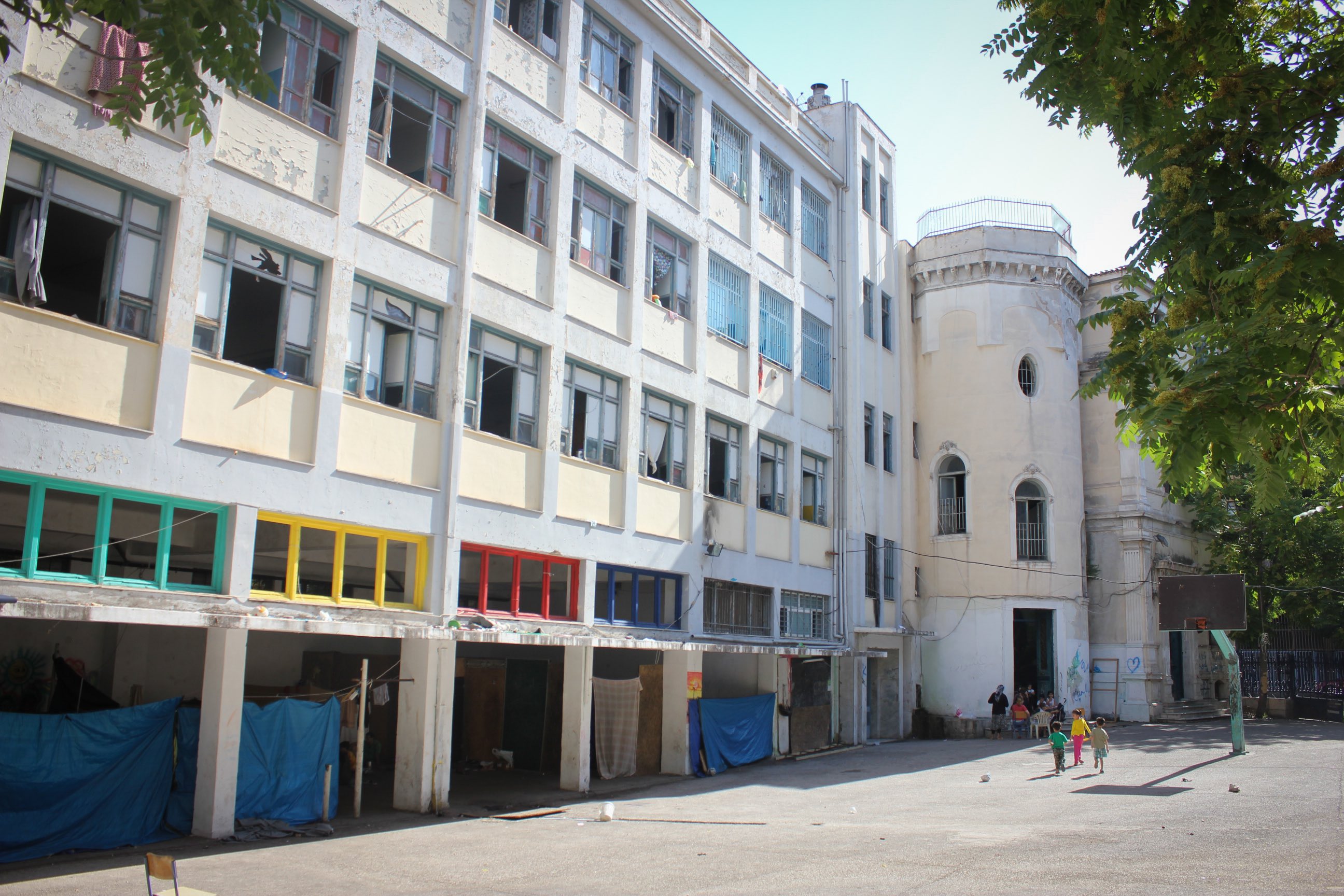 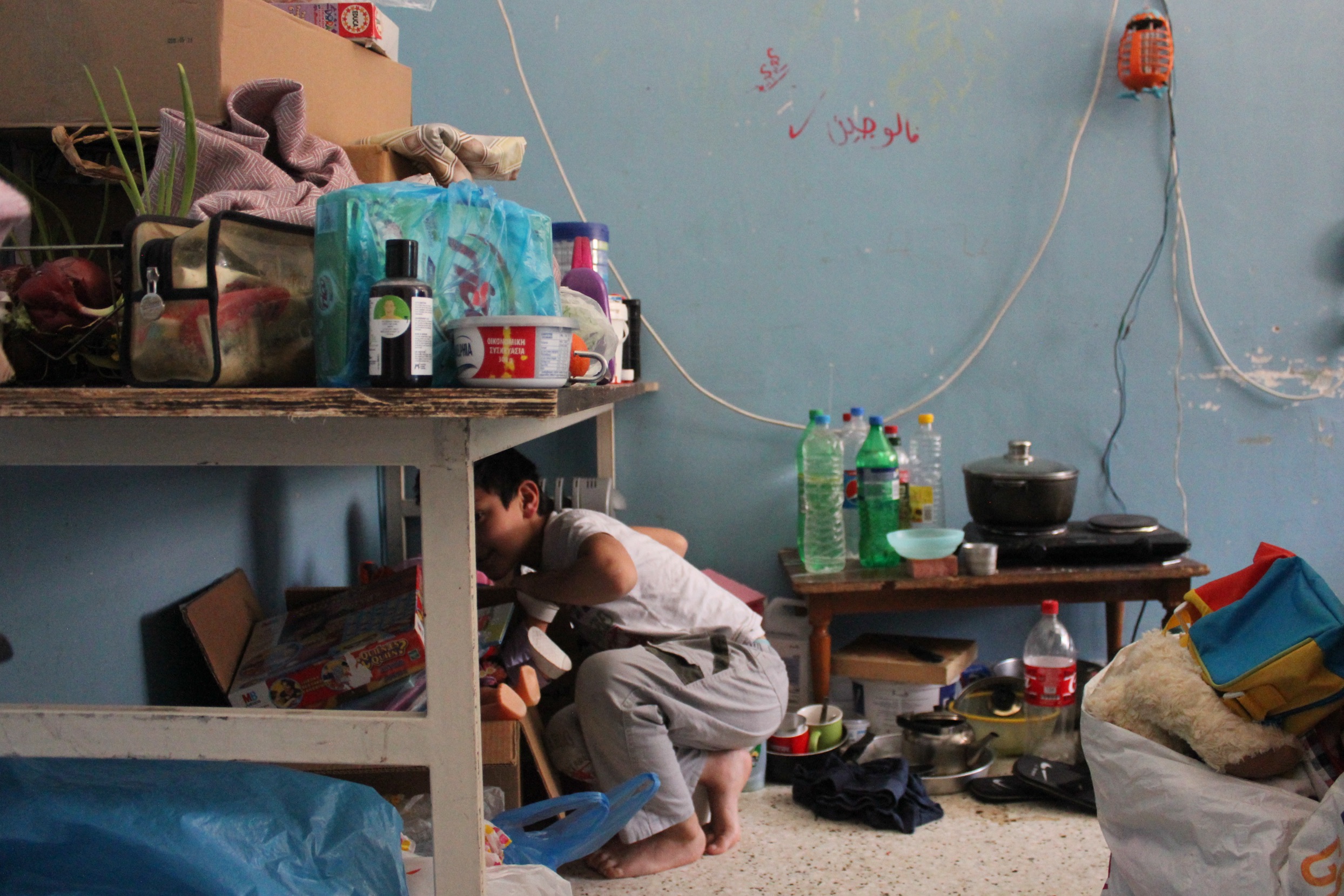 Each child who comes through the heavy wooden doors has their own vision of what school means. For Malik, an eight-year-old boy from Syria, it’s an opportunity to do the same drawing of a house, a bicycle, a car and a sun, over and over again. At the end of class, he often sneaks off, his pockets bulging with toys. For Daniel, a seven-year-old boy from Iraqi Kurdistan, school is as boring as ever – but his parents ensure he attends daily. He sits in silence and stares ahead, blank-faced. One day, when asked “Daniel, how are you?” he finally answered “I…am…a…cow!” before roaring with laughter and sprinting out of the door.

The adults are always trying to bring some excitement into the children’s lives. Once a Greek circus troupe arrived in Jasmine’s playground carrying a trumpet, a unicycle and juggling balls. The children instantly mobbed them; shrieking and squirming as swords were thrown through the air and bodies cartwheeled across the ground.

But the pressures of living packed together with around fifteen different nationalities, each with their own cultures, customs and languages, can easily produce conflict. Minimal access to basic resources, such as nappies or food, leaves people impatient. Fights have broken out over donated fans or hot plates — with residents claiming they’ve lost out because of racial prejudices. There are two washing machines for over 400 people. Bed bugs are a constant problem. Theft is common.

Nearly every day, families arrive at Jasmine’s gates, asking for a place to stay. Arrivals increase following escalations in fighting, such as when Turkish-backed forces captured Afrin in Syria in March. To say no to a family means turning them out onto the street. So, the number of residents at Jasmine swelled from approximately 250 to over 450 in less than a month. Tents sprouted across the playground, the library became a bedroom shared by multiple families and people began sleeping in the one classroom still designated for teaching. 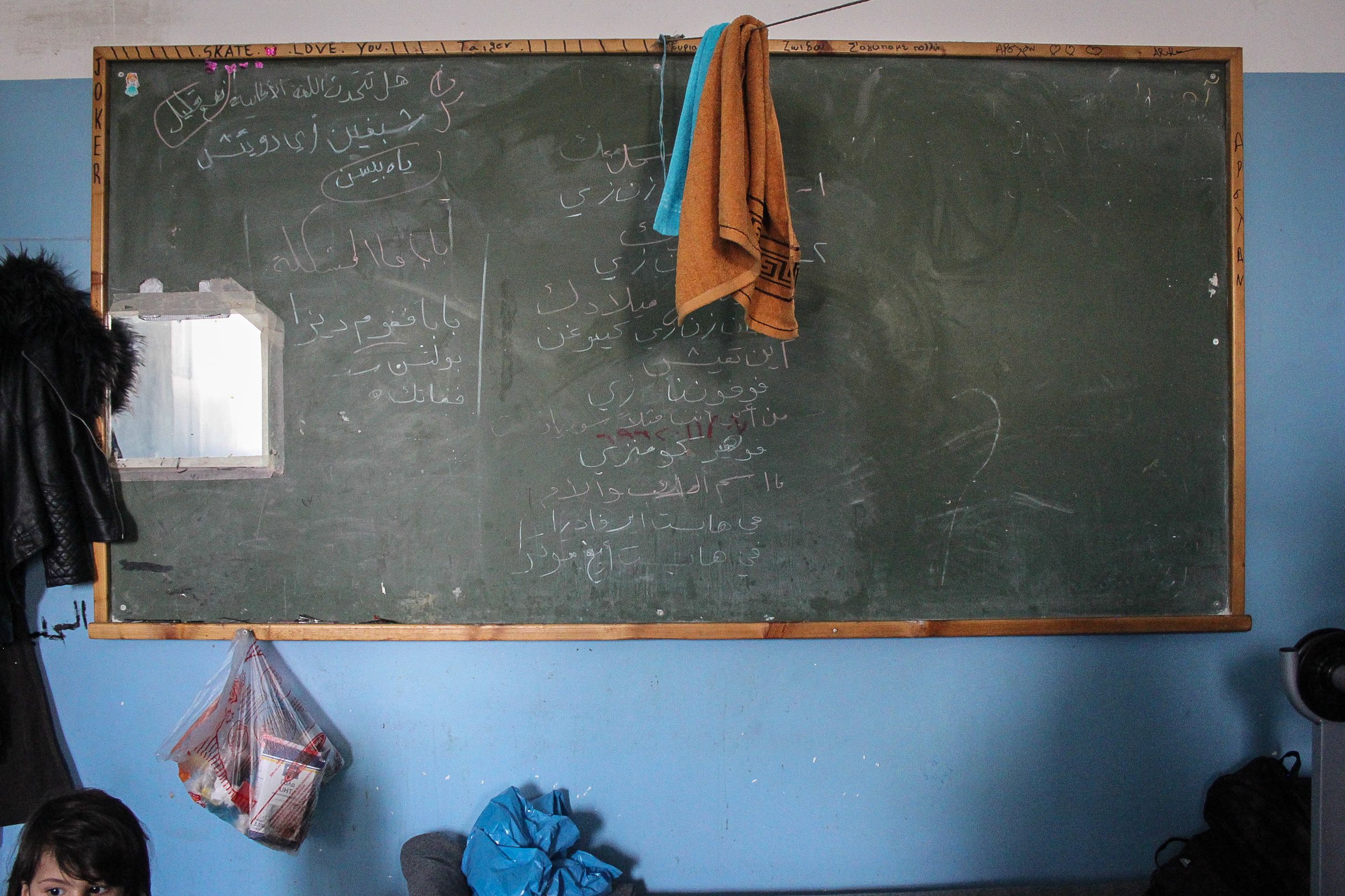 Growing numbers of people from Syria, Iraq, Afghanistan, Iran and elsewhere have been corralled in Greece since the closure of borders along the so-called ‘Balkan route’ in 2015 and the implementation of the EU-Turkey deal in 2016, which Amnesty International argues is the “main driver behind the inhumane conditions refugees and migrants face today” on the Greek islands. Relocation numbers are a fraction of what Europe promised.

Jasmine’s residents are reluctant and fearful to venture out into the surrounding neighbourhoods. With no easy path out of Greece – legal or illegal – what was meant to be merely a transit point becomes everyday life. Days turn to weeks, months and even years. People get desperate. Some leave Jasmine to walk across the continent with infants on their backs. Others find that staying together is a luxury they can’t afford. They gamble their last remaining savings on smugglers.

In April, the school’s toy thief, Malik, and his three-year-old sister, Amina, were sent to the airport by their mother to be smuggled abroad to an aunt. The children were arrested and detained, while their mother spent the next two weeks fruitlessly searching for them, becoming increasingly frantic. Eventually, they were found, together in a single Athens hospital bed, because all the official shelters were full. “Believe me, she is lucky,” said the lawyer from the Greek Council of Refugees who helped her locate and regain custody of the kids at trial. “We’ve worked on cases where children have been raped and have had organs stolen by people who claim to be smugglers.”

After ensuring that volunteers would continue to provide daily lessons for the kids, Hesham eventually set off by foot to Germany. Many parents remain, regularly calling their children who have been smuggled out of Greece, unsure when they will ever see them again. Families escape war and violence to come to Europe with hopes of rebuilding their lives. But those confined to illegal squats, who couldn’t find support anywhere else, console themselves with the belief that “Greece is not Europe.”

As the year draws to a close, cries of “Choo, Choo!” are echoing around the playground. The kids have fastened some shopping trolleys together to make a train and clambered aboard. One boy – the established conductor – pulls them all along, panting. “Where we go!?” he asks his passengers. “Alemania! [Germany],” the children chime in unison, so excited they can’t sit still. “We go Alemania!” they continue to cry, laughing as they go, but never arriving anywhere.

Journalist Francesca Mills volunteered as a teaching assistant at Jasmine’s makeshift school through 2018. Donate to the cause on GoFundMe.

Linkedin
RELATED ARTICLES
OTHER ARTICLES
For decades, an area of East London has served as a community hub for Vietnamese people looking for a taste of home.
The author discusses the all-consuming nature of heartbreak, and turning the experience into an incisive exploration of love and loss.
The last few years have seen an increase in LGBTQ-led initiatives to feed the hungry, with many finding ways to stay afloat despite the challenges.
Proposals to introduce a minimum GCSE threshold for student loans will disproportionately affect those from marginalised backgrounds.
50 years since its inception, and the campaign calling for recognition that capitalism depends on domestic labour is as pertinent as ever.
Whether it's partygate, the climate crisis or the spiralling cost of living, the fightback begins on the picket lines writes Tommy Vickerstaff