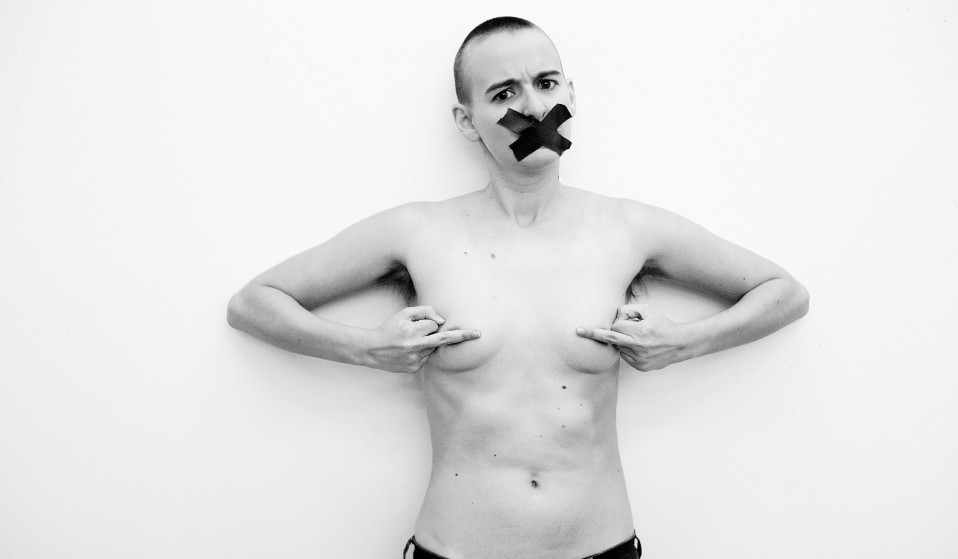 The Free the Nipple is a campaign saturated by conversations on the female body – but what about those who do not fall within conventional gender binaries? Meet two activists bringing trans and non-binary back into the politics of the nipple.

The Free the Nipple is a campaign saturated by conversations on the female body – but what about those who do not fall within conventional gender binaries? Meet two activists bringing trans and non-binary back into the politics of the nipple.

When I pick up the phone to Brit and Sam, they welcome me with warm tones – for a pair of radical activists, they sound seriously chilled. The seven hour time difference between Colorado and London has made arranging the interview difficult, but the pair have been determined to make it work.

Brit Hoagland and Sam Six are both from the small city of Fort Collins, USA, where they’re fighting hard to bring trans and non-binary visibility back to the heart of their Free the Nipple campaign. Since October, the pair have been spearheading a fight for the abolishment of a law in their town which criminalises the act of a woman being without a top in public. With backing from the likes of Miley Cyrus, Willow Smith and Cara Delevingne, the Free the Nipple movement has gathered some momentum in recent years, but there is one vital area of discussion which Brit and Sam say lacks strength: its voicing of trans and non-binary issues.

A recent survey ran by the Trans Student Educational services stated that 80% of students feel unsafe at their school due to gender expression, while 41% of trans people have attempted suicide – a painful number, which shows that fighting for the visibility and normalisation of gender fluidity is vital for our progression as a safe and inclusive society.

“I definitely think that some Free The Nipple campaigns lack conversation around gender fluidity,” Brit begins – the frustration is clear in their voice. “It’s taken such a backseat that you rarely hear about it.”

Brit has always felt strongly for rights around LGBTQ+ issues, but since coming out as non-binary late last year, they have felt even more of a disheartening backlash. “I’ve experienced the silencing myself, through news censorship. Even when I was advocating trans and non-binary issues for our Free the Nipple campaign, it still didn’t make it into the interviews that were done about me.”

Brit and Sam claim is that when a law states a ‘woman’ cannot go topless in public, based on the judgment of her breasts appearing larger than that of a cis-male, the ordinance automatically dismisses the existence of people who identify within a more gender-fluid spectrum. 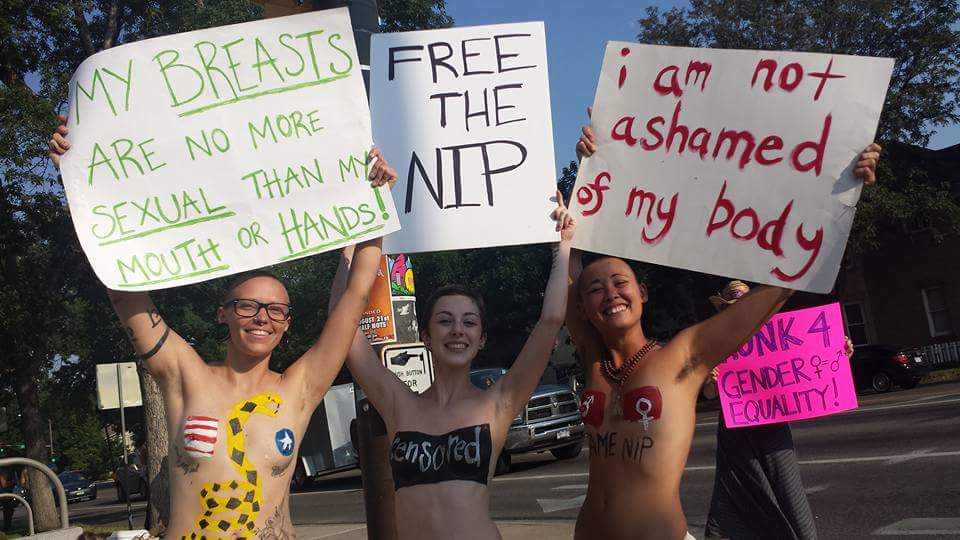 “The problem is that a lot of the language [in laws] erase trans and non-binary people, so when we try to have a conversation about it, it’s very ‘male’ or ‘female’ orientated,” Sam tells me. “We’ve been trying to change the conversation from ‘male’ and ‘female’ to just ‘people’, but it’s not been picked up on a whole lot.”

Media coverage on the pairs Free The Nipple action in Fort Collins has been widespread, but despite the activists focus on the exclusion of trans or non-binary people, these issues appear to have been dismissed. “There has been no comprehension of trans or non-binary people at all, despite how much I’ve brought that up,” Brit tells me, with sadness in their voice. “Since the start we have been very adamant that inclusive language is being constantly used,” Sam adds. “In all of our city council meetings, our emails to them, at protests on the corner and at press conferences too.”

The question is, why are people so often ready to talk about the liberation of female bodies, but not that of trans or non-binary people? Brit helped to shed some light this situation. “I think that our society is unprepared and unwilling to hear that their gender identity is something that could be brought into question,” they explain, “to look at trans issues is really frustrating for a lot of our population – then you get into non-binary-isms and it’s a whole new curve ball.”

“I would say that there is a fear of feeling ignorant or left out of the conversation,” says Sam. “A lot of people won’t sign themselves up for a conversation where they don’t know anything about the topic.”

As a progressive society, Brit and Sam implore that we must be prepared to listen and to learn more about trans and non-binary visibility. “The way that we have been conditioned society is partly to do with it not being talked about,” Sam continues, “but it’s also just not on people’s radar to understand, accept or be aware of other languages when talking about gender.”

The activists are encouraging people of their town, and those in wider communities, to begin actively using gender-inclusive language on a day-to-day basis. “I don’t know how many times I’ve said ‘non-binary’ in a conversation and people have said, ‘what’s that’?” Sam tells me, “but if you know how to use inclusive language, be consistent. Never get tired of people asking you about it.”

In light of this, the pair encourage a recontextualisation of the Free the Nipple campaign – it is not just a campaign for those who identify as women, but a campaign for all bodies. “It would be really helpful to bring the conversation around trans and non-binary people back to the movement as a whole,” Brit implores.

Linkedin
RELATED ARTICLES
OTHER ARTICLES
After rewriting the indie rulebook with her devastating songs about romantic longing, the singer-songwriter is now imagining a future in which the artist is no longer a product.
Steel City is often overlooked when it comes to the country's cultural radar despite its role in shaping electronic music.
A 28-year-old from Texas was forced to travel across state lines for an abortion that would save her life and end a pregnancy that her baby had no way of surviving.
In the latest instalment of Photographers in Conversation, the creator talks portraiture, platforms and taking inspiration from Little Simz.
We introduce our series spotlighting the voices of people who’ve been impacted by anti-abortion laws and anti-choice protestors.
With the UK now set to run out of vaccines, people working in the sex industry – particularly outside of major cities – have been left especially vulnerable, reports Brit Dawson.