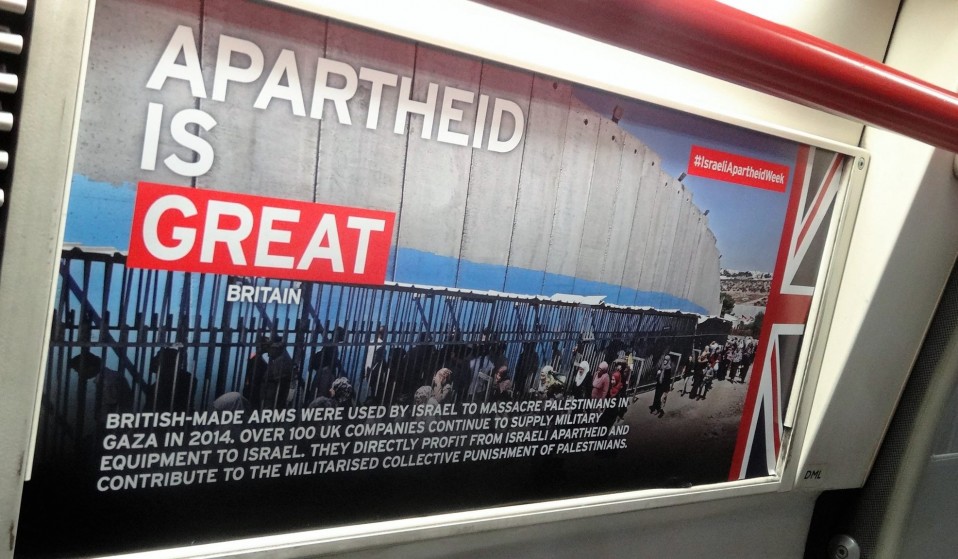 London Palestine Action hack the tube’s ad spots to highlight the British companies who profit from Israel’s illegal occupation of the Palestinian territories.

London Palestine Action hack the tube’s ad spots to highlight the British companies who profit from Israel’s illegal occupation of the Palestinian territories.

As part of coordinated protests around the world for Israeli Apartheid Week, activists from London Palestine Action decided to hack the tube’s ad spots. With hundreds of posters across the Underground network, they highlighted the role of British firms in the illegal occupation of the Palestinian territories by using spoof versions of government’s own adverts promoting British overseas trade.

In its push to promote British exports, the government has made some controversial friends, including Saudi Arabia, Bahrain and Israel – whose human rights records leave a lot to be desired, but can provide British firms with lucrative contracts. In a little-reported statement in October 2015, Britain’s most senior Foreign Office official, Sir Simon McDonald’s frank admission to MPs that human rights were no longer a “top priority” for the government seemed to confirm what activists have been saying for years: the UK government prioritises trade deals ahead of tackling injustice around the world.

Citing data from the Campaign Against the Arms Trade, LPA reminded travellers that over a hundred British companies supply military and security equipment to Israel, including BAE Systems, Lockheed Martin, G4S, Boeing, and Elbit Systems. To underline the consequences of arms sales and the lack of accountability that surrounds them to distracted commuters, they pointed out that £7m of British-made arms were used by Israel in ‘Operation Cast Lead’ in Gaza in 2014, during which more than 2,000 Palestinians were killed.

Other posters appeared, which call out Israel’s demolition of thousands of Palestinian homes in occupied East Jerusalem and the West Bank, and the services security company G4S provides to the Israeli prison system, which activists argue make it complicit with an Israeli military court system that arrests, detains and prosecutes more than 500 Palestinian minors each year. They also highlighted pro-Israeli bias at the BBC, especially during the latest outbreak of violence, which some have called “the Third Intifada”.

The Israeli government has been quick to condemn the posters and Prime Minister Benjamin Netanyahu requested the posters be removed immediately. In a statement, Transport for London said: “It is fly posting and therefore an act of vandalism which we take extremely seriously. Our staff and contractors are working to immediately remove any found on our network.”

We hit up a spokesperson from London Palestine Action to find out more.

What was the inspiration behind your latest action?
The idea started because of the biased coverage of the recent increase in repression against Palestinians. When you throw in the government’s recent promise to make parts of Palestine solidarity illegal, and the ongoing arms sales to Israel, we thought we had to do something to bust that narrative. We aren’t going to stop taking action to support the Palestinian popular resistance just because of some basic threats. 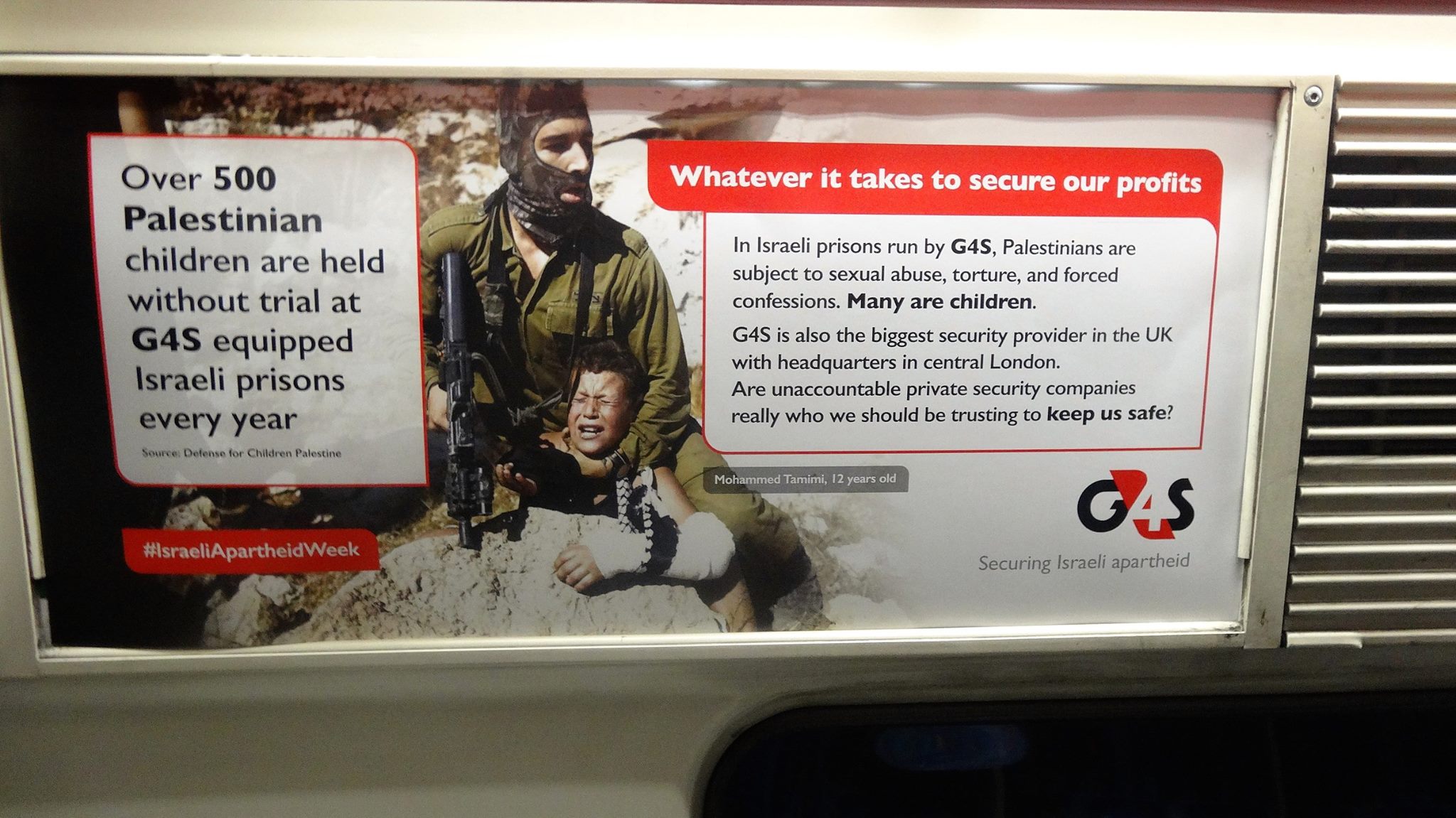 Why do you feel the mainstream media narrative is balanced in favour of Israel?
Two of every three people in the UK aren’t sure whether Israel is occupying the Palestinian territories or vice versa. This isn’t an accident! It always reminds me of that Malcom X quote: “If you’re not careful, the newspapers will have you hating the people who are being oppressed, and loving the people who are doing the oppressing.” When you throw in Britain’s history – that we stole Palestinian land too – you end up with an awful situation where news coverage doesn’t match up with either the history or what’s happening now.

Subverting the tube’s posters has been done a few times recently, by Strike! and others. Do you feel it’s an effective way to get your message beyond people already engaged with the issue?
It definitely can be! If anything, the ridiculous over-reaction from Israeli politicians – with meetings and phone calls to the UK to complain about our action – shows that Israel must think it’s effective too.

Linkedin
RELATED ARTICLES
OTHER ARTICLES
Whether it's partygate, the climate crisis or the spiralling cost of living, the fightback begins on the picket lines writes Tommy Vickerstaff
Freddie Miller’s new series of photographs investigates who today’s trainspotters are and what drives their unfettered enthusiasm.
Proposals to introduce a minimum GCSE threshold for student loans will disproportionately affect those from marginalised backgrounds.
In the wake of the decision by the supreme court to overturn Roe v Wade, thousands of protestors filled the streets to express their rage and anguish.
Photographer Arthur Grace recalls travelling through the Soviet Bloc and finding ways to evade the surveillance of his work.
Finland-born photographer Sirkka-Liisa Konttinen looks back on her decades-long documentation of life in Northern England.