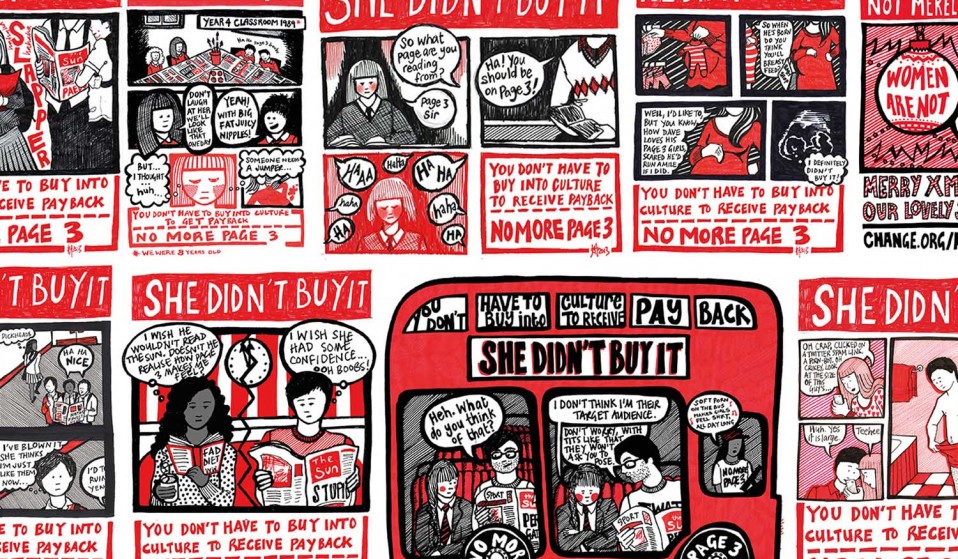 After nearly half a century, The Sun’s Page 3 girls have been covered up. A 45-year tradition of one of Britain’s biggest media institutions, Page 3 has been debated in the House of Commons, loved by builders, and hated by nearly everyone else. What does its removal mean for the future of tabloids?

Huck asked former Daily Star reporter and filmmaker Rich Peppiatt why the No More Page 3 campaign succeeded in making Murdoch and The Sun give where others had failed in the past.

Ever since his provocative Daily Star resignation letter was published in The Guardian, Peppiatt has been a vocal campaigner against tabloids, and turned the camera on their editors in his first feature film, One Rogue Reporter, which features Hugh Grant and Steve Coogan, follows Peppiatt as he turns the tables on tabloid villains such as Kelvin MacKenzie and Paul Dacre.

Do you think Page 3 being removed is as a result of shifting values, or the endless campaigns against it?

The No More Page 3 campaign has been the most vocal advocate of getting rid of Page 3 that there’s ever been and they’ve been very organised – the rise of social media has given them a platform that hasn’t existed in the past to really spread their message.

They’ve had some very high-profile supporters and I think people will look back on the No More Page 3 campaign in years to come and say: “This is how you do a grassroots campaign.”

What No More Page 3 did very cleverly was put pressure on advertisers and the places that sell The Sun – they’ve managed to force people like Tesco to hide the front pages and I think the commercial impact it’s had has had a massive influence, I’m sure that’s lost The Sun sales.

Is it as a result of changing values? I doubt that 30 years ago there was 80 percent of women saying “Page 3 is great,” I’m sure that most women didn’t like it back then either, but there was no organised way of expressing that, and perhaps they didn’t feel like there was a way to get rid of it.

People who have been vocal supporters of Page 3 such as Neil Wallis [former deputy editor of News of the World] would say that 250,000 people have signed the petition, but 2.5 million people buy The Sun. So ten times more people support Page 3 than those against it, which is completely disingenuous because supporters of Page 3 like to think that if you buy The Sun, that is a vote for Page 3, when it’s not. You can not like Page 3 and still buy it.

You said in your resignation letter to Daily Star owner Richard Desmond that what his paper does is “brand other celebrities sexist… then arrange the day’s news based on the size of the subject’s breasts” – do you think removing Page 3 will have an effect on the sexism of tabloids?

I think it helps not to have a pair of tits on Page 3. I don’t think it’s going to make tabloids some sort of egalitarian entities – all they’re doing at the moment is taking Page 3 and replacing breasts with scantily clad celebrities. It’s still objectification; it’s still putting titillation on Page 3.

Not a lot has changed apart from the absence of nipples. That’s not to diminish the result of getting rid of Page 3, but it will take a long time to get those tabloid values to disappear entirely. I think that sex sells, and tabloids are about selling – it’s going to be a long time until they abandon using sex as a way to flog their paper.

Do you think that the Daily Star will join The Sun in getting rid of their Page 3 model?

One-hundred percent not. Richard Desmond will now say “we are the only paper other than the Daily Sport with Page 3” and use that as a selling point. This is the man who owns Television X, Asian Babes and other assorted publications of the sort. I don’t think that he has any moral issues with Page 3. I think that he will now see Page 3 as his big selling point and will advertise that.

Peppiatt’s film One Rogue Reporter is screening at Somerset House as part of their Unorthodocs series on Monday 26th January, followed by a directors Q&A. The film is also available on iTunes.

Linkedin
RELATED ARTICLES
OTHER ARTICLES
With skyrocketing rents, packed out viewings, bidding wars and more, renting in London has never been harder.
The idea that a younger generation is abandoning work has become a popular narrative online, but it doesn’t necessarily reflect reality.
Following the announcement of an 80% hike in the energy price cap from 1st October, crowds gathered outside the offices of energy regulator Ofgem to protest and declare their intention to undertake a payment strike.
In his 2008 series, the photographer pictured himself as Angela Davis, Martin Luther King Jr., Malcolm X, and other prominent figures.
The two-day long event returned to London this year, showcasing a spectacular parade, steel bands and Caribbean food.
Birdy Chu reflects on documenting the historic moment in which the territory was formally passed back from the UK to China.