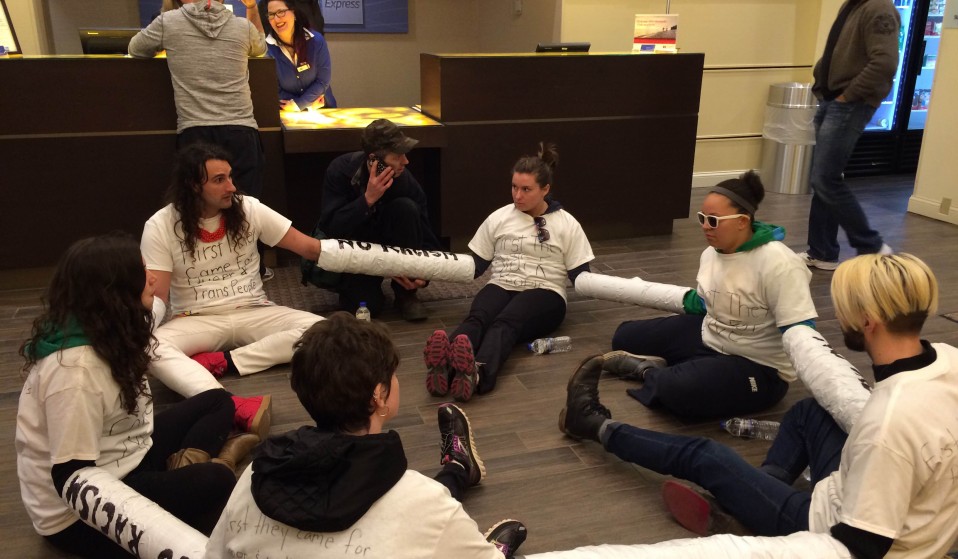 When racial justice campaigners heard that Trump was set to talk in their Wisconsin town, they were willing to be arrested to stop his hate-filled rally.

It’s beginning to look a bit like Donald Trump is going to win the Republican nomination in the seemingly never-ending race to become the next President of the United States. Yep, despite the fact he doesn’t appear to have two policies to rub together, aside from building walls along U.S. borders (which to be fair is an idea that a bloke called Hadrian came up with across the Atlantic a few thousand years ago), this man will probably be one of two people vying for control of the White House.

Despite the fact his manifesto seems to consist entirely of finger flicks to “make America great again”, his flock of supporters can literally see him do no wrong. His recent “misspeak” on abortion a prime example: when he blurted out that he believed women who get abortions should be punished, his supporters went into a whooping frenzy. Hours later he backtracked on this regressive policy, and his fans went even more berserk. It’s almost funny. Almost, that is, because in reality the explicit racism in his rhetoric presents a stark and real danger.

When confronted with the fact that KKK leader David Duke had told his white supremacist fans to vote Trump or commit “treason to [their] heritage”, Trump told CNN he couldn’t’ condemn any group until he’d properly researched them.

When a #BlackLivesMatter protestor showed up to a Trump rally in November last year, and summarily had the shit beaten out of him by Trump’s devotees, Donald suggested the attacks were justified. “Maybe [the protester] should have been roughed up,” he said. “It was absolutely disgusting what he was doing.”

“On 6 March, in a neighbouring city – just an hour from Madison – 3 people of colour were killed by a white man,” says Z! Haukeness, a community organiser from Wisconsin, who has been campaigning for racial justice for years. “It came in the wake of what Trump has been saying throughout his campaign about dangerous immigrants draining the system. It was a homicide in that vein.” 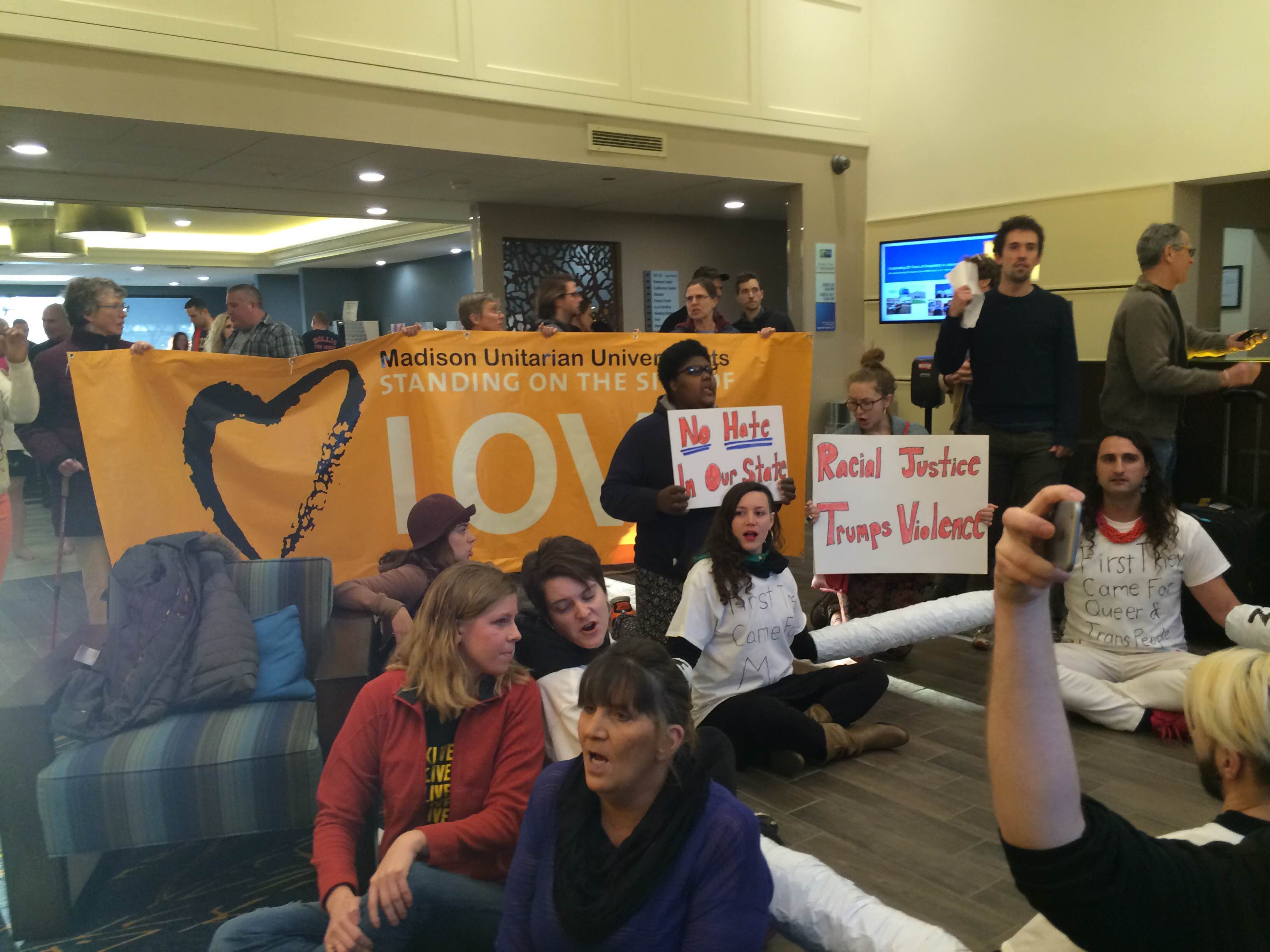 A 39-year-old man from Milwaukee has been arrested for the murder of 40-year-old Jesus Manso-Perez, 36-year-old Phia Vue and 32-year-old Mai Vue.

As far as campaigners see it, there’s a direct link between the racist and xenophobic rhetoric Trump spouts and attacks like this. The list of hate speech and attacks just keeps on going, and a growing mass of Americans are worried.

When activists from Showing Up for Racial Justice (SU4RJ) found out the Trump was set to speak in Wisconsin, they decided something had to be done to stop him.

“We just knew we had to stand up to his hate, and say “no hate in our state”, Haukeness continues. “We organised to put pressure on the Holiday Inn that was hosting him, to pressure them into cancelling the event.” The owners didn’t listen, and the rally was set to go ahead as planned. 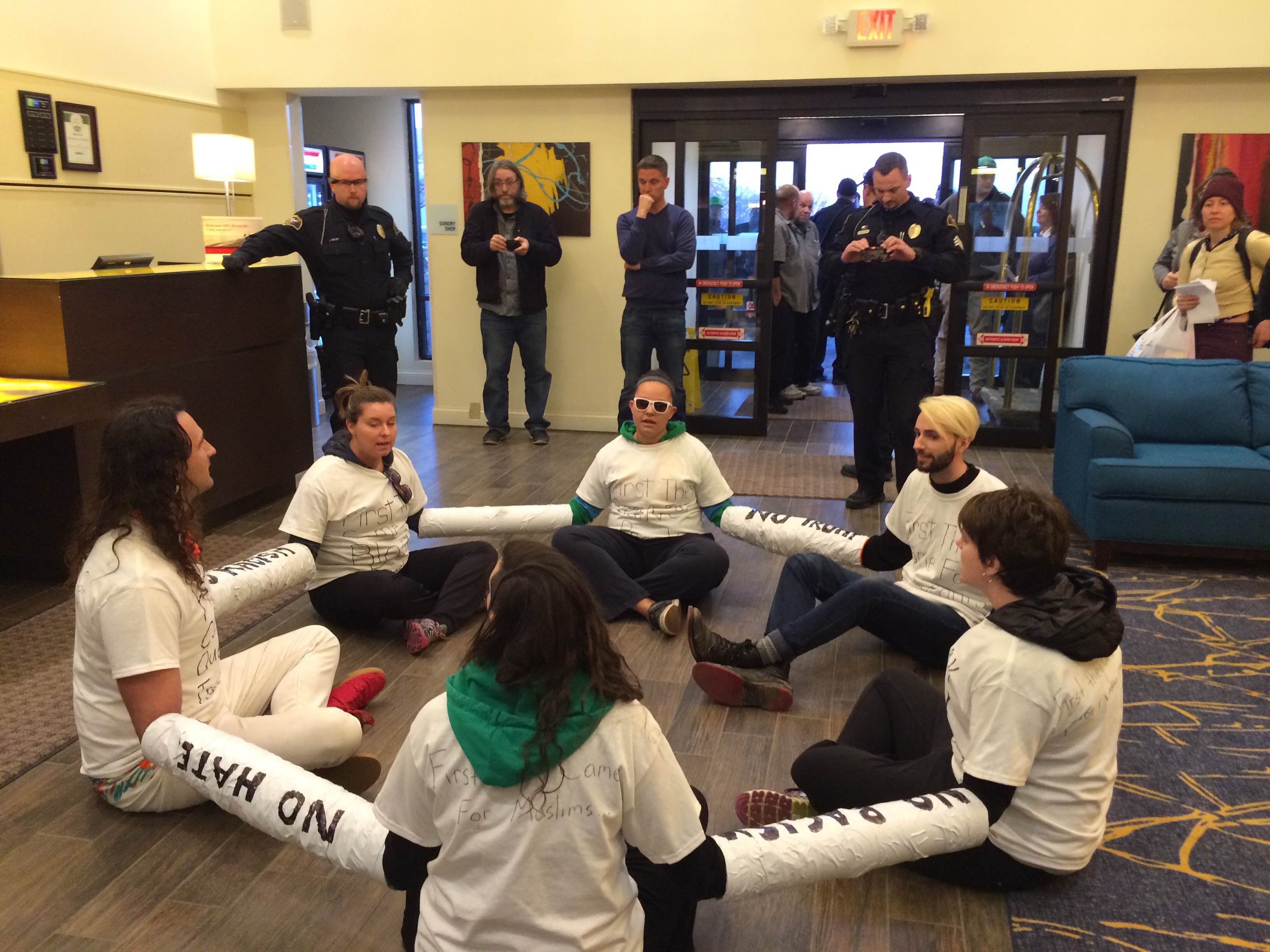 “The night before Trump was set to speak we held a protest, and did a locked on sit in in the lobby”, they say. Around 40 people turned up, chanting and holding signs, telling the Holiday Inn for the final time to cancel.

The six activists,  Haukeness included, who locked themselves on in the hotel entrance were sat there for four hours, before the police finally cut them out and made arrests – charging each with disorderly conduct, disrupting an officer and trespassing.

The planned rally still went ahead, but Haukeness reckons they still had an effect. “It provided a lot of bad publicity to Holiday Inn! This isn’t an issue of free speech; it’s about dangerous hate speech that’s leading to people’s deaths. There’s no space for it.”

Was it worth it? “Definitely,” Haukeness laughs. “We’re spreading a counter-narrative, so people who agree with our side of the story and agree with racial justice have a voice, and feel connected to some resistance.”

He argues it also should make venues in future more reluctant to host Donald Trump, because of all the bad press.

The lengths activists are going to in an effort to confront Trump, and highlight to voters his dangerous views are a testament to the real threat they seem him posing.

“When people talk about black lives mater it doesn’t mean at the exclusion of white people – it’s quite the opposite.” He uses the analogy of a burning town to prove his point. Do the fire brigade drive around and spray water on all the houses, or just the ones that are burning? Assuming you go with the latter, it can’t then be said that the fire brigade don’t care about the houses that have avoided the blaze. It’s a simple logic, but one that rings true.

“Black people have been through centuries of racism; you can’t see this movement as the exclusion of white people! It’s in the interest of people of all colours to have more racial justice. The billionaires like Trump are the problem.” Haukeness also sees Trump’s rise as an opportunity, to expose the racism and bring more people onto the side of racial justice. “While he is having success, so it this movement, he is catalysing a movement against him.”

The powerful wave of protest against Trump is gaining momentum, and Haukeness is clear it’s only going to escalate further. “People are seeing examples of how to take action, and they are following suit. As we get closer to the vote, and someone actually getting elected, people are going to show up in stronger force.”

Linkedin
RELATED ARTICLES
OTHER ARTICLES
From the chip shops, to the bingo parlors and burlesque dancers, photographer Mike Coles remembers capturing scenes of holidaymakers by the English coast.
Last week, Tower Hamlets council removed its nudity-restricting licensing conditions in a huge win for London’s kink community.
Students are being left to languish in unsafe housing, in some cases leading to serious health complications.
Following the release of his latest album, the rapper talks about finding a new approach to songwriting, attitudes to poverty, and why his music is more than a political statement.
Protestors gathered outside Downing Street following the latest atrocities committed by Israel against Palestinians living in the besieged strip.
To mark the premiere of his new documentary on surfing giant Gerry Lopez, the filmmaker and former pro skateboarder sits down to share his unique brand of wisdom.