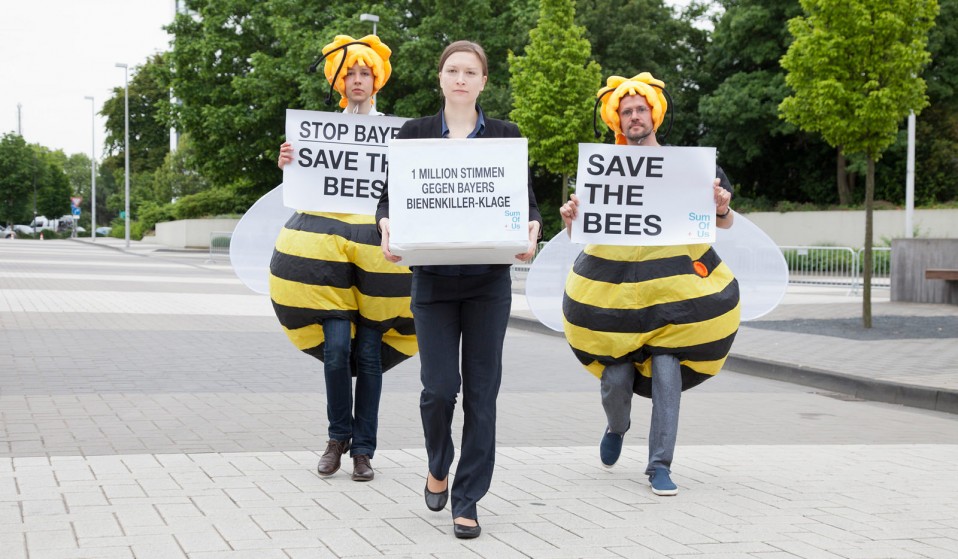 Photography © Sum of Us

Pesticides are contributing to a dramatic decline in global bee populations. If bees are pushed to extinction humans will struggle to survive, yet pesticide producers are attempting to silence protest through legal action against online activism group Sum Of Us.

Pesticides are contributing to a dramatic decline in global bee populations. If bees are pushed to extinction humans will struggle to survive, yet pesticide producers are attempting to silence protest through legal action against online activism group Sum Of Us.

Global bee populations have been in freefall for over a decade and scientists have identified climate change, industrial farming and pesticides as the primary causes. Up to a third of everything we eat is dependant on honey bee pollination and if bees disappear, we’re left with a gaping hole in our food chain.

Scientific research identified neonicotinoids as particularly harmful to bee populations, which prompted online activism group Sum of Us to join other organisations in pushing for them to be outlawed. After huge public pressure the EU banned neonicotinoids in 2013, but two of the world’s biggest agricultural companies, Syngenta, headquartered in Basel, Switzerland, and Bayer CropScience of Monheim, Germany, have taken the European Commission to court in an attempt to overturn the ruling.

Now Sum of US are being threatened with legal action by a Bayer sub-contractor, in an apparent attempt to silence pesticide critics. We spoke to Sum of Us Campaign Manager Jon Lloyd to find out more. “A research facility that is a Bayer contractor is threatening legal action,” Jon explains. “They claim that their own research into “neonic” pesticides differs from the peer-reviewed studies that we use as the basis for our campaigning. We believe their aim is for us to drop our campaigns against Bayer and retailers that sell bee-killing pesticides.”

Corporations often use legal action as a means to prevent attacks on their business practices – however it has the potential to backfire and create public relations disasters. After a successful consumer boycott, power company EDF were recently forced to back down from a £5m lawsuit against No Dash For Gas activists who shut down the newly-constructed West Burton gas-fired power station in 2012.

Perhaps the most famous example is the “McLibel” case that ran between 1997 and 2005, when McDonalds sued environmental activists Helen Steel and David Morris for producing a critical pamphlet. Although McDonalds won the case, the negative publicity generated has tarnished their reputation, and likely contributed to falling profits in recent years.

But often companies are successful. “Lawsuits are a very common silencing tactic that big corporations use,” Jon explains. “Armed with deeper pockets and large legal teams, often just the threat of litigation is enough to make a lot of groups back down – but not us. The Sum Of Us community is 6 million strong and thanks to small donations from our members we will be able to hire our own lawyers and face down these threats. There’s a lot at stake, our future – our very survival as a species – depends on the survival of bees and other pollinators.”

Head over to Sum of Us to sign the petition to get Bayer, Syngenta, and BASF to drop their lawsuits against the European Commission or help support Sum of Us’ legal defence fund.

Linkedin
RELATED ARTICLES
OTHER ARTICLES
As the Criminal Bar Association enters its fifth week of action, criminal barrister Russel Fraser explains why the legal professionals have walked out and how action is likely to escalate.
In the latest instalment of Photographers in Conversation, the creator talks portraiture, platforms and taking inspiration from Little Simz.
Steel City is often overlooked when it comes to the country's cultural radar despite its role in shaping electronic music.
Photojournalist Fiora Garenzi spoke with people still living in Eastern Ukraine, an area which seen some of the heaviest fighting since the war began.
From the chip shops, to the bingo parlors and burlesque dancers, photographer Mike Coles remembers capturing scenes of holidaymakers by the English coast.
Photographer Bud Glick recounts documenting everyday life in the area, and what it taught him about the Chinese immigrant experience.