News & Politics / Activism / Athens is rising up against police brutality 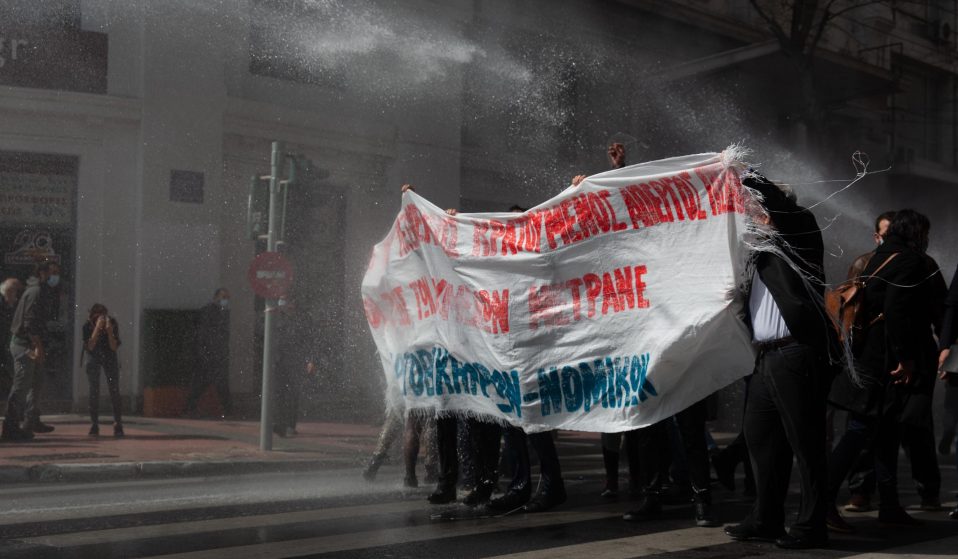 An alleged police beating in the city’s suburbia has violently unleashed pent-up anger over an out-of-control police force and the government’s mishandling of the pandemic and destruction of democratic rights.

Earlier this month, a video allegedly showing an officer beating a man circulated in Greece. It has since violently unleashed pent-up anger over an out-of-control police force and the government’s mishandling of the pandemic and destruction of democratic rights.

Last weekend (March 13 to 14) saw town squares across Athens and Thessaloniki occupied by residents determined to resist police brutality. The coordinated action came after a week of violent clashes between police and local residents, with riot squads, tear gas and stun grenades unleashed in Nea Smyrni, Panormou, Nikaia and elsewhere. But on Saturday and Sunday, thousands of local people came together to say: enough is enough.

This wave of violence goes beyond anything seen since the darkest days of Greece’s economic crisis. The uprisings across Athens and in Thessaloniki represent an aggressive rejection of the right-wing New Democracy (ND) government’s law and order agenda.

Tensions have been rising steadily for weeks, as Greece struggles through the longest and harshest Coronavirus lockdown in Europe. Cases are only now showing signs of slowing, after rising persistently, despite increasingly draconian restrictions.

The government’s legitimacy has been further shaken by a sexual abuse and paedophilia scandal after revelations about National Theatre director Dimitris Lignadis; their willingness to risk Europe’s first political hunger strike death in 40 years, as they stubbornly refused prisoner Dimitris Koufontinas his legal rights until he ended his protest after 66 days without food; and an ongoing battle with students – particularly students in Thessaloniki who occupied Aristotle University – in resistance to a new law which will create a campus security force.

Complaints of police brutality have risen 75 per cent in the last year alone, with no sanctions for officers involved – except in a handful of the most controversial cases. Despite the prohibition of protests due to coronavirus, demonstrations have been growing alongside rising tensions with police on the streets of Greece’s major cities. But a revolt on the night of Tuesday March 9 in the docile Athenian suburb of Nea Smyrni revealed the police’s inability to contain the intensity of public anger. 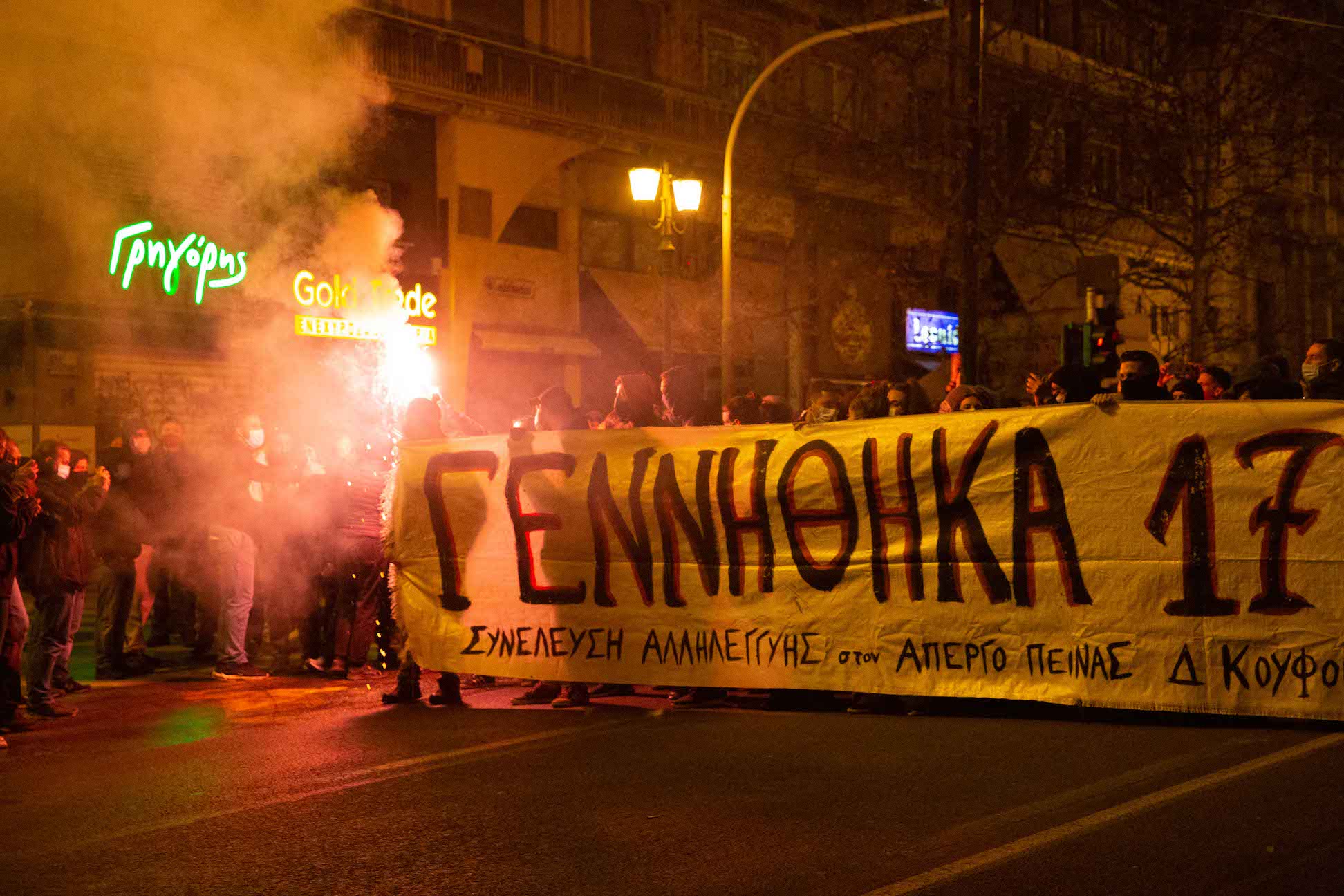 The protest was organised in response to a video from Sunday March 7, allegedly showing an officer beating a man who was shouting “I am in pain”. Police said they attended the scene in response to reports of people breaking lockdown restrictions. A spontaneous demonstration the same day drew over a thousand people and was broken up by police with tear gas.

The following Tuesday (March 9), over 5,000 people gathered again in Nea Smyrni’s central square to call for an end to police violence and punishment of the officer involved in Sunday’s attack. As night fell, violence broke out and riot police units unleashed teargas and fired flash bangs to disperse the crowd. One policeman was seriously injured after being pulled from his motorcycle by enraged protestors, prompting Greek PM Kyriakos Mitsotakis to air a special message on TV calling for calm – but denying any wrongdoing on the part of the police.

At 300 Euros, the fine for violating coronavirus restrictions is the highest in Europe when compared to the average salary. This combined with ministers’ frequent public violations of their own rules and the police’s uneven and often violent enforcement of restrictions has created intense social anger – which was revealed in the response to the attack in Nea Smyrni.

“There is a long history of police brutality in Greece, which has practically never been punished,” explains Anastassia Tsoukala, associate professor of Criminology at Université Paris-Saclay. “After receiving public support from Michalis Chrisochoidis, Minister of Citizen Protection [in charge of police], they have no reason to limit their inclination to be authoritarian. We would expect the operational and political hierarchy to place legal limits on their behaviour – or at least punish them if they overstep – but this very rarely happens. Society has largely tolerated police attacks on left-wingers, political activists, anarchists and marginalised populations. The shift is that now we have seen evidence that police violence against any area of society is possible.”

Even before ND’s latest round of police hires, Greece had the second-highest rate of police per capita in the EU (after Cyprus) but the lowest number of nurses per capita. But now, as ICU occupancy hovers persistently around 90 per cent and health workers warn the system is at breaking point, the government is facing criticism for its decision to significantly boost police numbers and shower them with new equipment, rather than invest in the austerity-weakened health system as the pandemic took hold.

For months, activists have been raising concerns over the government’s transfer of ever-greater responsibilities to the police: from refugee provision, managing demonstrations, enforcement of coronavirus restrictions, a new university security force and even taking responsibility for unaccompanied children of arrested parents away from social workers.

Fears about human rights abuses and the erosion of democratic rights have been validated, as documented cases of police violence and law-breaking have gone unpunished, while even peaceful and lawful protests have been violently suppressed. Since the pandemic began, riot police have recently been deployed against students, striking workers and doctors protesting the mismanagement and underfunding of the health service, while attacks on refugees and migrants are routine. 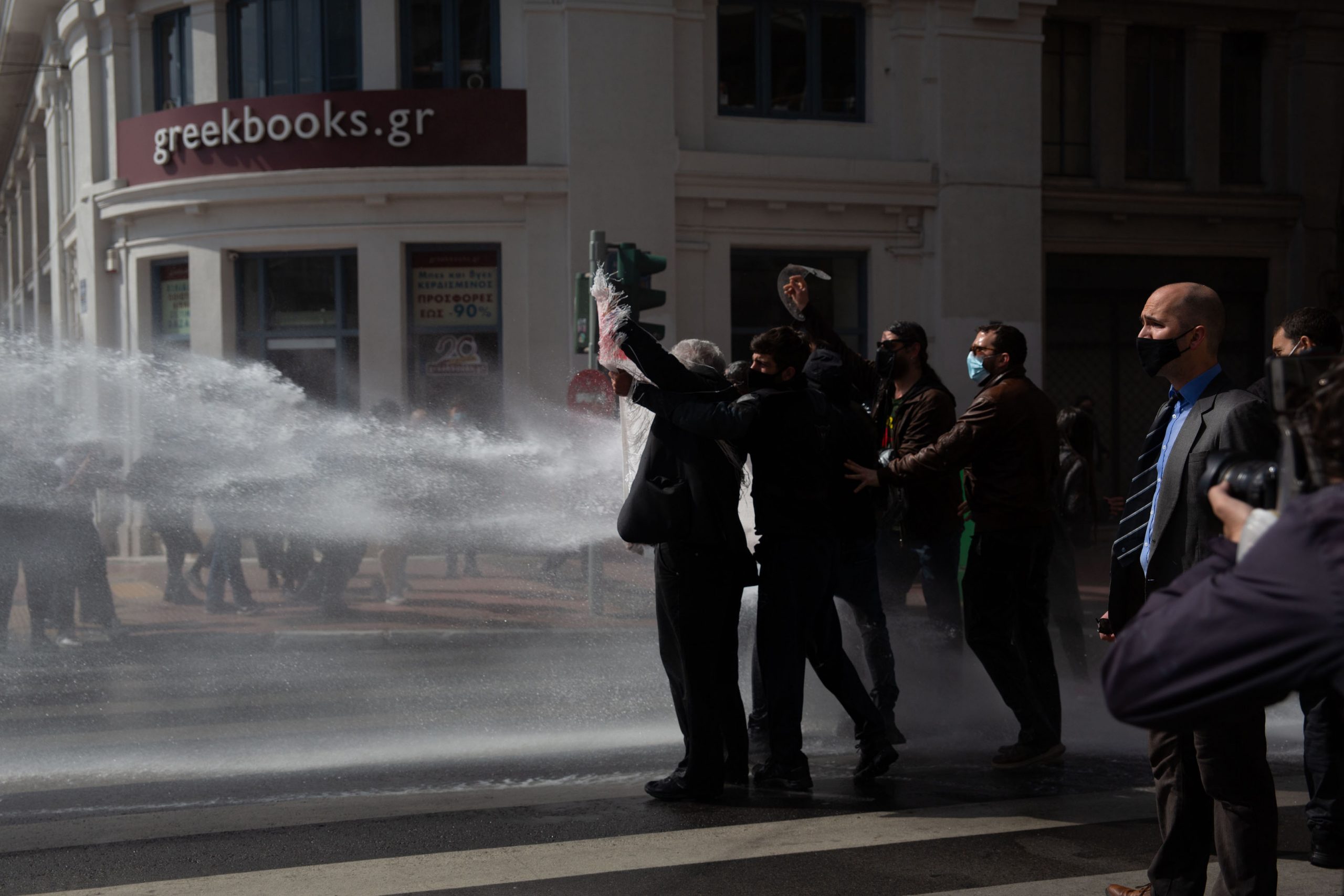 “In 2020, the government passed a law which made unconstitutional restrictions on protest, with police later issuing further unconstitutional protest bans, yet even when people try to protest without breaking any of these unconstitutional provisions, they are still violently dispersed by law enforcement,” Tsoukala explains. “This is extremely worrisome because not only is it authoritarian, it creates insecurity in law. Citizens no longer know where the legal limits lie – and by legal I mean even the anti-constitutional laws.”

On Saturday (March 6), many of the same lawyers who successfully prosecuted Golden Dawn in 2020 led a peaceful protest, demanding the government respect the law and prevent the unnecessary death of political hunger striker, Koufontinas. They were repeatedly attacked by two police water cannons and chased around central Athens, while scores of arrests were made.

In Thessaloniki, after an unsuccessful police operation to evacuate Aristotle University, students announced they would leave their occupation peacefully. But still, the government chose to order another police evacuation early Thursday morning, because they could not accept defeat.

In a rare ceding of ground, the Ministry of Citizen Protection announced the previous day the suspension pending investigation of the officer in the Nea Smyrni attack – but only after protestors turned the neighbourhood into a conflict zone and seriously injured an officer. Violence, it seems, is the only language in which the government knows how to speak – and also the only language it can hear. 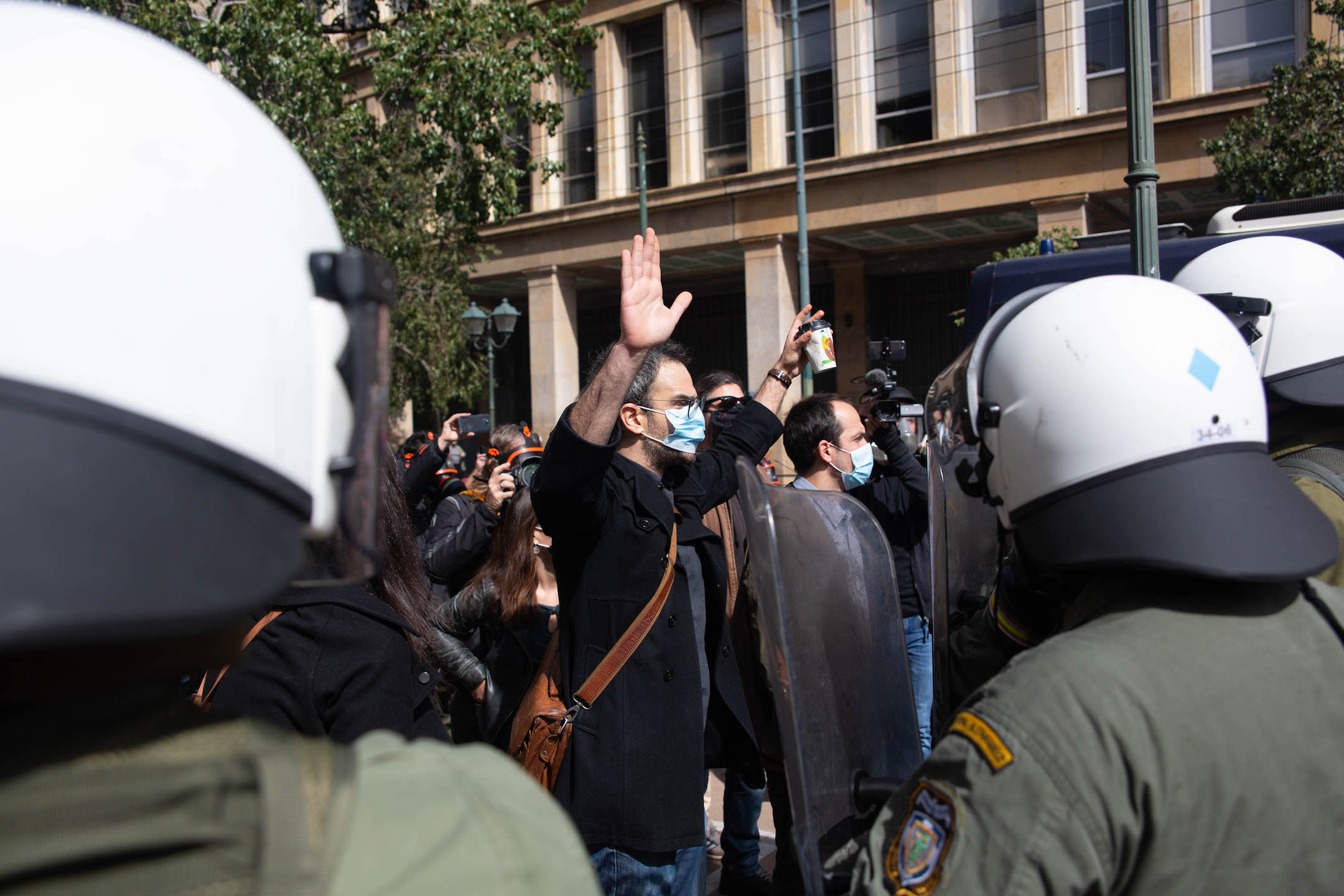 “They want to present an image of a government that imposes its will and never steps back,” Tsoukala explains. “Law enforcement agents are only punished when their actions incite broad protest across society. The suspension announcement is a symbolic communication exercise, designed to appease the government’s own electorate.”

Greek mainstream media has attempted to play down police violence, and in some cases even blame the public for unprovoked attacks, while signal-boosting government messaging. Yet, as numerous videos have circulated on social media of incidents such as police arresting random passersby or smashing up parked cars, police brutality and the lack of accountability has been the main topic of conversation on social media.

There are multiple protest actions planned, including lawyers on Wednesday, March 17, spearheading a ‘day of mass defence of democratic rights and people’s freedoms and against authoritarianism.’ But as the relationship between police and the community further breaks down, there are fears of a repeat of 2008, when teenager Alexandros Grigoropoulos was shot dead by police. This killing set off days of violent unrest across Greece, in some of the biggest riots in recent European history.

“The shape this unrest will take is not clear; it could lead to further protests and popular pressure at the local level or it could lead to a massive revolt,” Tsoukala explains. “Our institutions are no longer functioning: there is no real debate or oversight in parliament, the mainstream media is owned by the government’s political allies and the judiciary have not prevented violations of the constitution or the rule of law. We are seeing a shift to an authoritarian model of government and there is an unwillingness to take action to protect the democratic regime. I believe that the message that has been addressed to people is: ‘Either you obey or we will crush you.’”

Linkedin
RELATED ARTICLES
OTHER ARTICLES
In the wake of the decision by the supreme court to overturn Roe v Wade, thousands of protestors filled the streets to express their rage and anguish.
Photographer David Hoffman recalls documenting the extreme wealth inequality around Tower Hamlets and Hackney int the 1980s.
Thomas Hoepker‘s images taken during a road trip across America provide a searing social commentary about a divided country.
In the latest instalment of Photographers in Conversation, the chronicler of raves, protests and beyond explains why he’s drawn to such specifically visceral environments.
With inflation now at a 40-year-high of 9 per cent, demonstrations organised by TUC took place to demand action from the government.
For decades, an area of East London has served as a community hub for Vietnamese people looking for a taste of home.