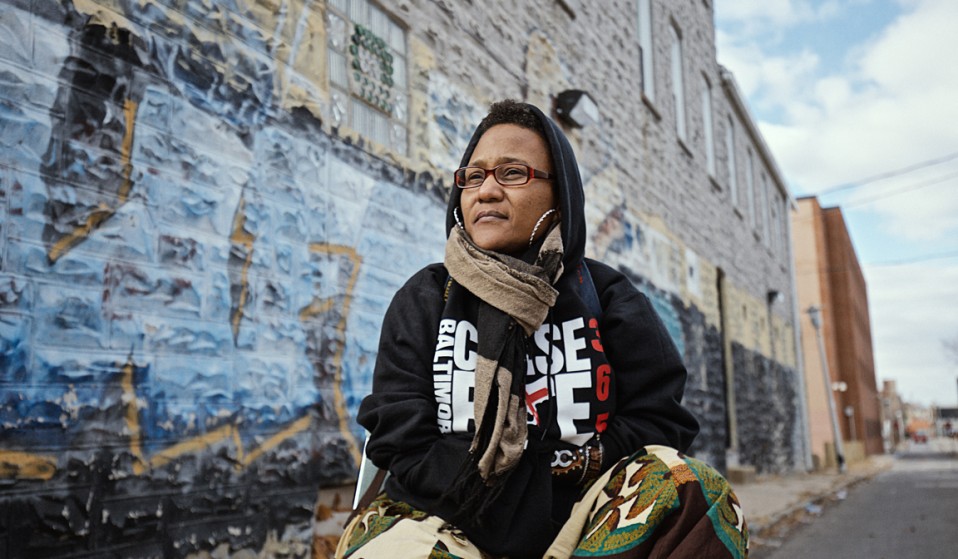 Baltimore’s murder rate has reached an all-time high. Activist Erricka Bridgeford knows she can’t stop the killings, but through a ceasefire campaign built on compassion, she’s leading the city on a decades-long quest for change.

Baltimore’s murder rate has reached an all-time high. Activist Erricka Bridgeford knows she can’t stop the killings, but through a ceasefire campaign built on compassion, she’s leading the city on a decades-long quest for change.

It’s a bright but frigid Friday afternoon in East Baltimore, where the sun casts long shadows off a row of vacant homes. Activist Erricka Bridgeford arrives at a local hub for non-profits – tucked inside a narrow brown-brick building surrounded by graffiti – and checks her phone for news. We’re nearly 14 hours into a city-wide ceasefire and, so far, no one has been killed.

Baltimore saw a record 343 homicides last year and although 2018 has barely begun, 27 men and women have been murdered in 39 days. To help stem that cycle of violence, Erricka co-founded Baltimore Ceasefire 365, a grassroots initiative with a simple goal: “Nobody kill anybody for 72 hours.”

“I love Baltimore,” she says with a flash of pride. “I’ve experienced a lot of joy and a lot of pain here. It’s made me everything that I am… But you know when someone in their eighties starts to feel lonely ’cause a lot of people are gone? I started feeling that way around 38. What’s horrible is that teenagers now feel that way.” 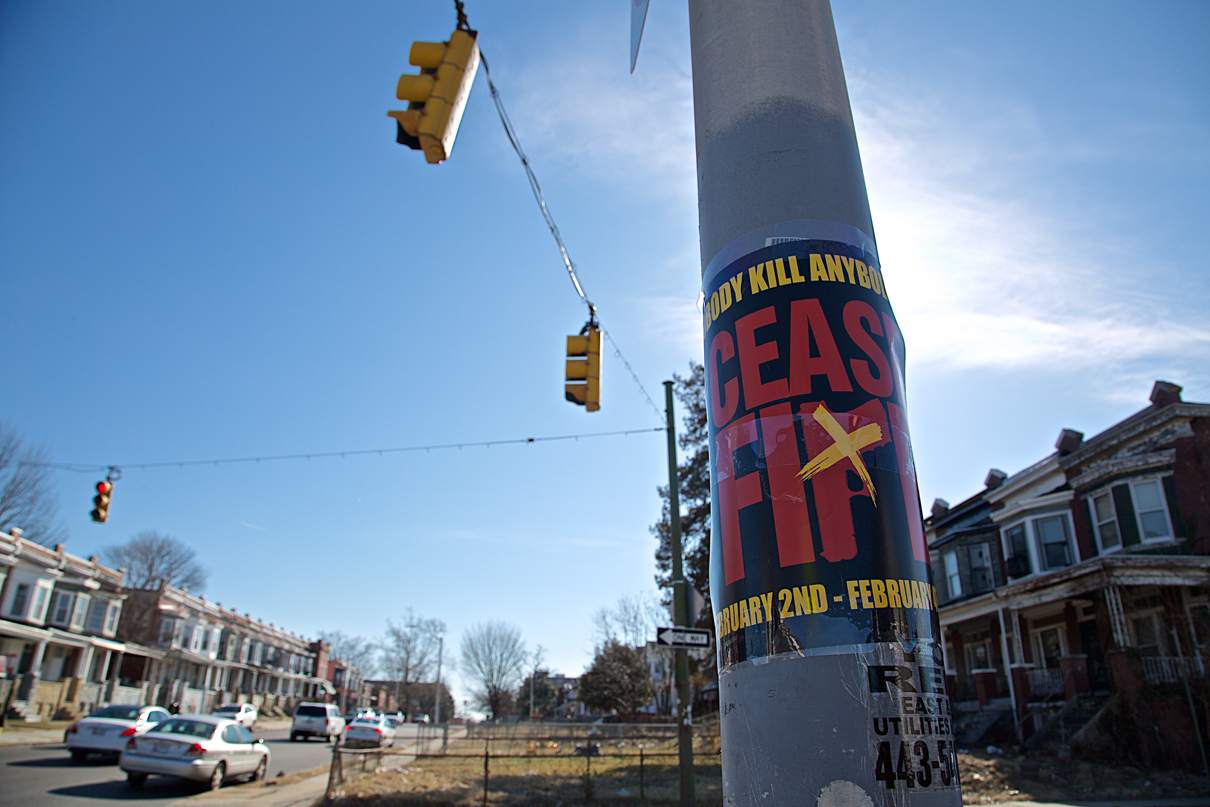 It takes months of planning for a ceasefire to have a chance at success. There are events to coordinate, from block parties to peace walks, and a wave of publicity to sustain. Even more important is facilitating dialogue at street level. Mediation is Erricka’s specialty.

Since 2002, she has been training communities and organisations across Maryland to resolve conflict. The 45-year-old – dressed in a black hoodie, dark-red glasses and hoop earrings – is just five-foot-two but carries a huge presence.

Growing up in West Baltimore, Erricka has experienced profound loss. At 12, she saw her friend Mike dying on the sidewalk. In 2001, her brother was shot and declared dead but managed to survive. In 2007, another brother was shot – this time fatally. In 2015, she lost two cousins and a stepson. “It feels like my own blood has been spilled on these streets.” 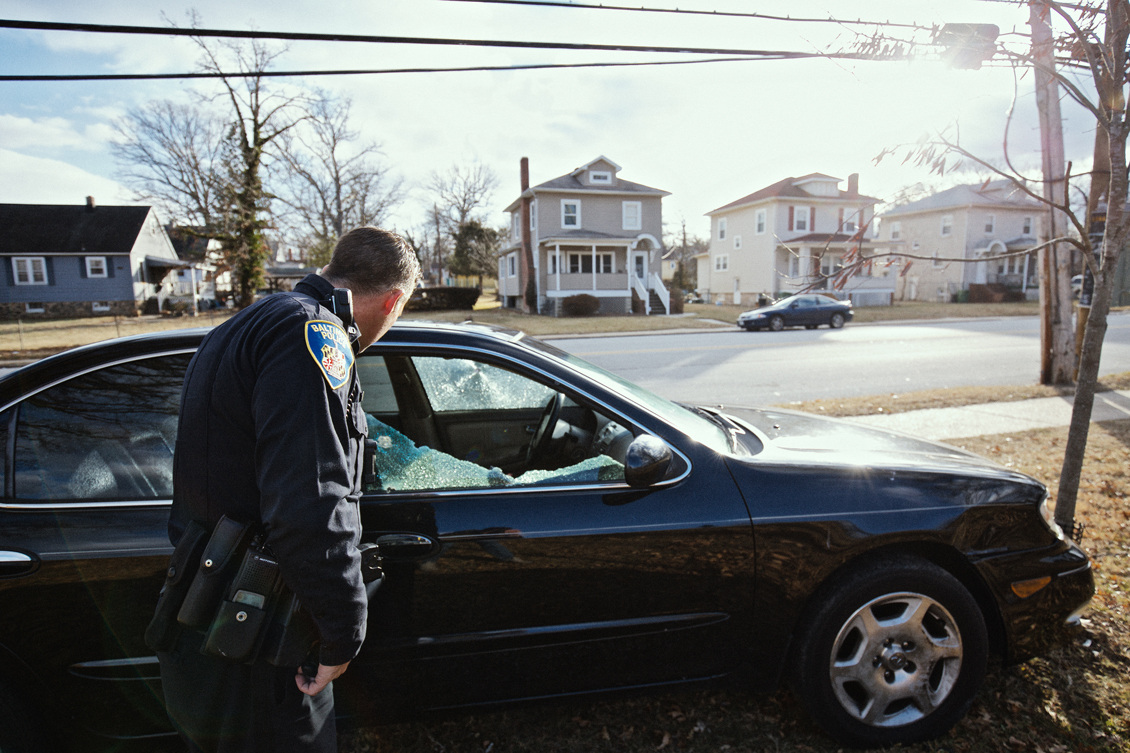 At an anti-violence march in 2015, local rapper Ogun broached the idea of a ceasefire with Erricka. She’d already made great strides as an activist: successfully campaigning to repeal Maryland’s death penalty in 2013, then working to introduce State support for survivors of homicide victims two years later. But a ceasefire never found traction until May 2017, when Erricka’s 19-year-old son drove her home from work one day and mentioned Baltimore’s spiralling murder rate.

“I’d spent all day facilitating dialogue in conflicts, helping to create peace… so it was disheartening,” she says now. “Like, ‘How is that possible with all the work we’re doing?’”

Erricka’s desire to take action at street level has been catalysed by a lack of action from authorities. In November, Police Detective Sean Suiter was fatally shot a day before he was due to testify on corruption in his own department. Since then, at least seven Baltimore police officers have been charged with a litany of crimes including racketeering, robbery and extortion. 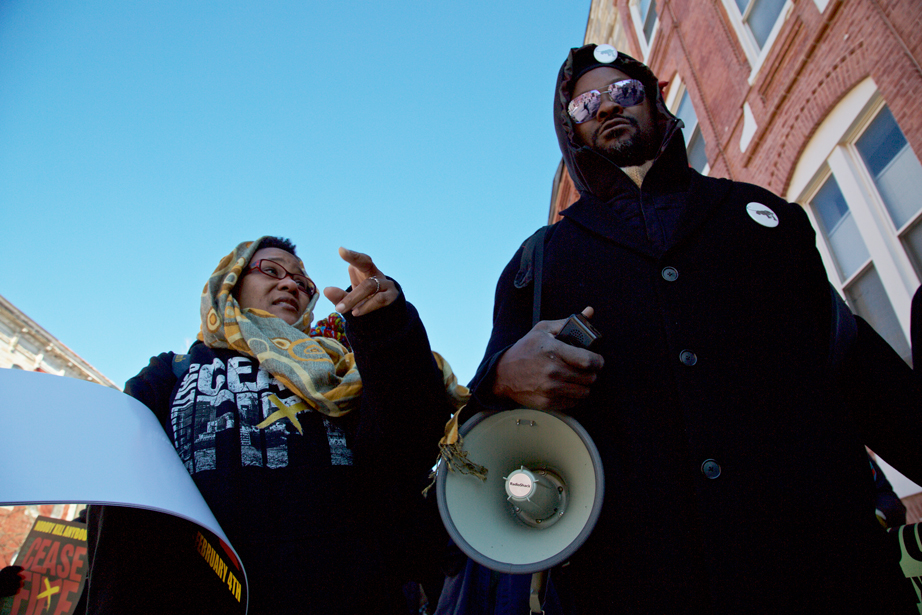 Now citizens like Erricka are taking matters into their own hands, dispelling the myth that high murder-rates are simply a community issue. “People like to say crime is this person’s problem, or that person’s problem,” say Letrice Gant, who helps organise the ceasefires.

“We recognise that America as a culture is inherently violent. America itself started with violence. It’s been part of the narrative on a cellular level. Violence has been celebrated, it’s been glorified, and when you treat violence like something that has to be in your culture, you see things like 343 people lost.”

During the first ceasefire last August, two young men were killed. Whereas the average murder went largely unnoticed, the timing of these ones created shockwaves. “We all got our hearts broken together that weekend,” says Erricka. “You could feel it in the city.”

A second ceasefire in November saw another murder, but by then locals had begun gathering around homicide locations and treating them as sacred ground – part of a new strategy called ‘Don’t Be Numb’.

“It’s a collective consciousness kind of thing,” Erricka explains. “We ask the entire city that if somebody gets killed, you stop. Then we all come together to pour light and love into that space. That’s how we should respond to murder every day.” 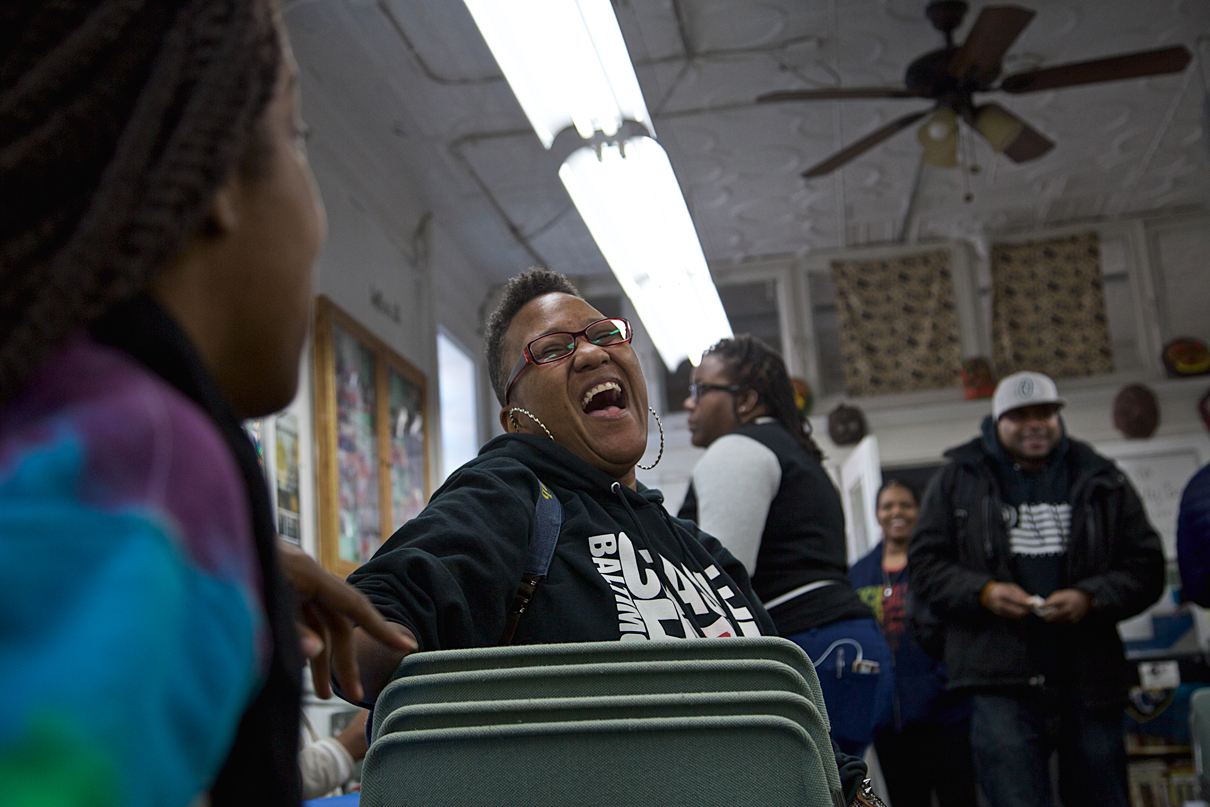 Erricka’s phone buzzes with the news she’s been dreading: a man has been critically shot not far from here. It puts the ceasefire in jeopardy, but the goal remains intact. By noon the next day, Erricka is holding a sidewalk vigil on Division Street for Sean and Mykia Dyer, a married couple killed here one week ago.

“I’m good friends with Sean’s brother, so I’d met him,” she says, struggling to hold back tears, broken glass still scattered on the ground in front of her. “Most of his gunshot wounds were on his back because he laid on top of Mykia to protect her.”

A moment of silence is held, prayers are said in unison and the mission feels buoyed once again. This is a ‘self-determination movement’ where levels of participation are flexible – even if it’s just changing your profile picture online – and Errick believes there’s enough resolve behind that to sustain 72 hours of peace. By midnight on Sunday, she’s proven right. It’s the first successful Baltimore Ceasefire, kickstarting an 11-day stretch without a homicide. 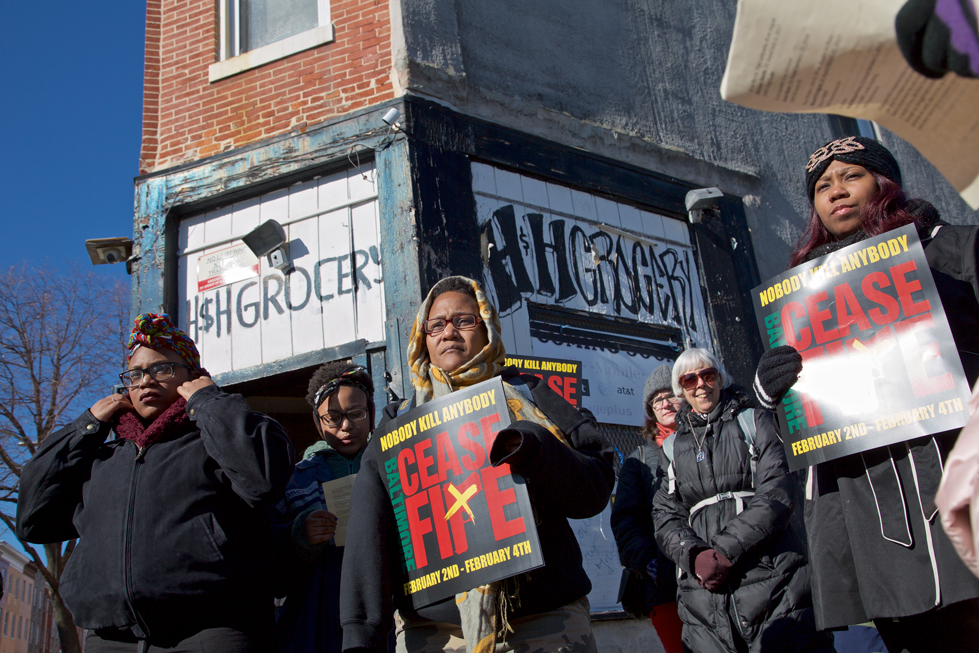 “Our goal is to not need a ceasefire at all one day,” says Erricka. “We aren’t so naive to think we can just heal all the things that cause violence in Baltimore City. That’s going to take time, just like it took time for things to get the way they are right now. This is decades in the making.”

Linkedin
RELATED ARTICLES
OTHER ARTICLES
David 'Dee' Delgado’s photo project is about honouring and uplifting the city of his youth, and a world rapidly disappearing under the relentless onslaught of gentrification.
A group of aid workers face prison for helping to save people fleeing their homes at sea. If they are charged, it will have a chilling effect on humanitarian efforts.
After fleeing the war in Ukraine, people are finding it impossible to secure affordable and decent housing in the UK.
After building his reputation covering the US civil rights movement in the 1960s, the photographer went on to produce some of the most enduring images of the past century.
Jeffrey Henson Scales intimate portraits and protest images of the BPP and its leaders offer a rare insight into organisation at a time of societal upheaval.
Zsófia Sivák’s ongoing project documents the country’s tavern culture, preserving a once defining part of rural life.