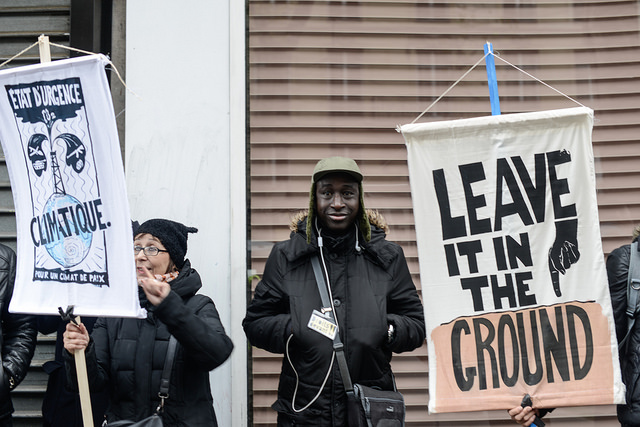 After failure at Copenhagen in 2009, the stakes are high for progress at the UN climate summit in Paris (COP21). Scientists warn we are rapidly running out of time to protect the planet from the devastating effects of climate change, yet media and politicians have primed people not to expect much from the talks.

The three-month state of emergency France declared after the Paris terror attacks means marches, protests and demonstrations are currently illegal. Civil society groups are concerned this makes pressuring for the changes they would like to see much harder. But activists have adopted innovative tactics to ensure their voices don’t go unheard, such as creating a human chain and gathering thousands of empty shoes in Place de la Republique instead of marching.

“For many groups, especially French ones, the crushing of civil liberties has made them more determined to organise,” explains Danielle Paffard, a campaigner at climate action group 350.org, currently in Paris. “Lots of groups have come out strongly to say, ‘It’s our duty to mobilise, make our voices heard and not give up our civil liberties’. At this moment, it’s important that love wins out over fear and movements win out over injustice.”

Many see the state of emergency as designed to suppress dissent, as political gatherings are banned but football matches, trade fairs and Christmas markets have been allowed to go ahead while the summit is on.

But activists are determined not to lose sight of the bigger picture: making the changes necessary to avert climate change catastrophe will require a battle that doesn’t end with Paris.

“We’ve no doubt the agreement will be a step in the right direction but it will never deliver the level of climate justice that’s needed,” Dani explains. “But Paris is not the end. It’s part of the puzzle, but it’s not the most important part. Whatever the outcome, we’ll need really strong social movements to make sure the change – the just transition we need – happens. This is a moment to reflect and build momentum, so we’re stronger and ready to have the big fights we need to have after Paris. So for us, the movement is more important than what’s happening in the conference halls.”

Find out more about what climate action group 350.org are up to in Paris.

Linkedin
RELATED ARTICLES
OTHER ARTICLES
In the wake of the decision by the supreme court to overturn Roe v Wade, thousands of protestors filled the streets to express their rage and anguish.
Whether it's partygate, the climate crisis or the spiralling cost of living, the fightback begins on the picket lines writes Tommy Vickerstaff
Photographer Arthur Grace recalls travelling through the Soviet Bloc and finding ways to evade the surveillance of his work.
Finland-born photographer Sirkka-Liisa Konttinen looks back on her decades-long documentation of life in Northern England.
Photographer David Hoffman recalls documenting the extreme wealth inequality around Tower Hamlets and Hackney int the 1980s.
Photographer Matthew Brookes recalls following a group of young people in Venice Beach living in search of the perfect wave.