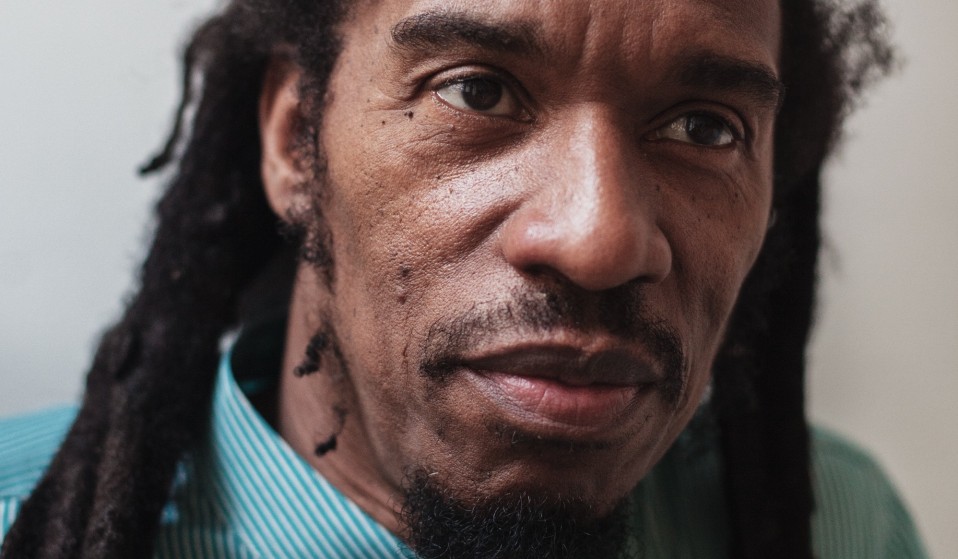 The poet, activist and writer talks racism, Conservatives of colour, and why the Windrush scandal was no surprise to black people in Britain.

The poet, activist and writer talks racism, Conservatives of colour, and why the Windrush scandal was no surprise to black people in Britain.

It feels a little odd to be meeting Benjamin Zephaniah in the Langham, a five star hotel in the heart of London’s West End. The 60-year-old poet, activist, campaigner and author has a reputation as a radical and a revolutionary. Surrounded by luxury, his views, I’d have thought, might seem a little out of place.

Born and raised in the Handsworth area of Birmingham, the dyslexic son of a Barbadian postman and a Jamaican nurse, Zephaniah’s career as a poet wasn’t always a given. “The only people who told me I couldn’t do it were grown ups who should have known better,” Zephaniah says now, as we take a seat together in the corner of the hotel’s swanky restaurant. Zephaniah was never fussed about being told he couldn’t or shouldn’t – famously turning down an OBE back in 2003.

We meet in the wake of the Windrush scandal, as Britain is in uproar following details of how badly people had been treated, sometimes deported, by the British state having arrived in the country from the Caribbean between 1948 and 1971 at the invitation of the UK government. Amber Rudd, who until the start of this week was Home Secretary, was forced to resign over the incident. It’s a topic Zephaniah has been outspoken on.

It took Zephaniah six years to write his upcoming autobiography, The Life and Rhymes of Benjamin Zephaniah. “My agent, who passed away, she was always insistent that I had to write my life story. I told her I wasn’t old enough, they you write your life story just before you die,” he explains. “Finally, she convinced me to get going. But I said there could be no contract, no deal, no money or publisher. I wanted to write it at my own pace. Last year I just thought, it’s ready to be published now.” 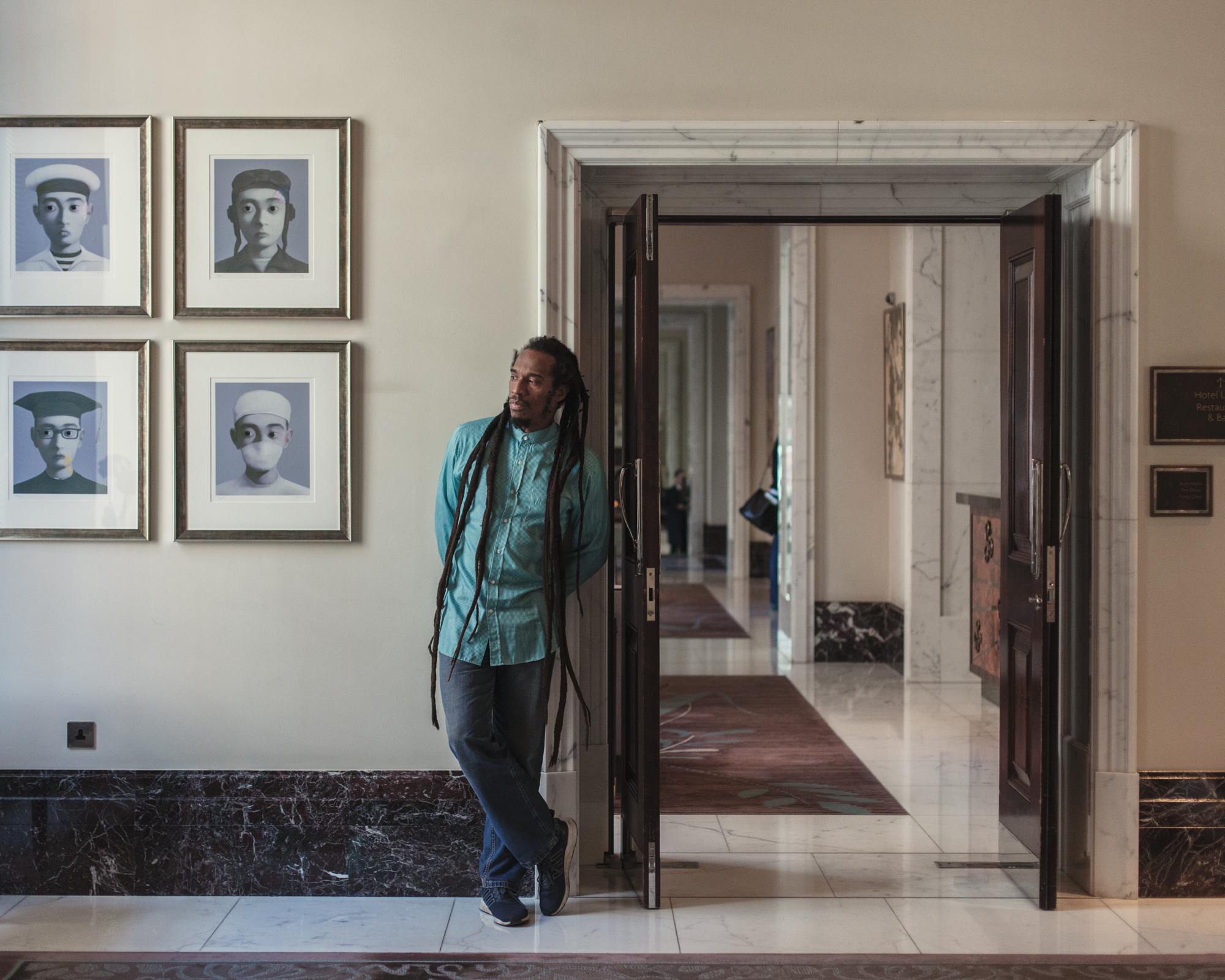 It’s worth noting that a few hours after we finish meeting, Zephaniah will speak on BBC Radio, and admit to having abused an ex-partner. If I’d have known about this when we met, of course, it would have come up in conversation. I’d have made sure of that. It’s right that people be aware of what Benjamin, who seems to show remorse, has himself brought to light.

You talk in the book about the first time you experienced the physical violence of racism, do you remember the first time you became aware of your blackness?
I was in school, when I started primary school. They picked me out. At first, they weren’t negative, they were excited to have a black kid because I could be in the cricket team. Apparently, blacks were good at cricket. There was a day where everyone had to bring in their favourite golliwogs. I’d get asked if that’s what my dad and uncles looked like. I thought to myself: shit, this is what life is going to be like. Sometimes I think people have very little understanding of how normalised some forms of racism were. 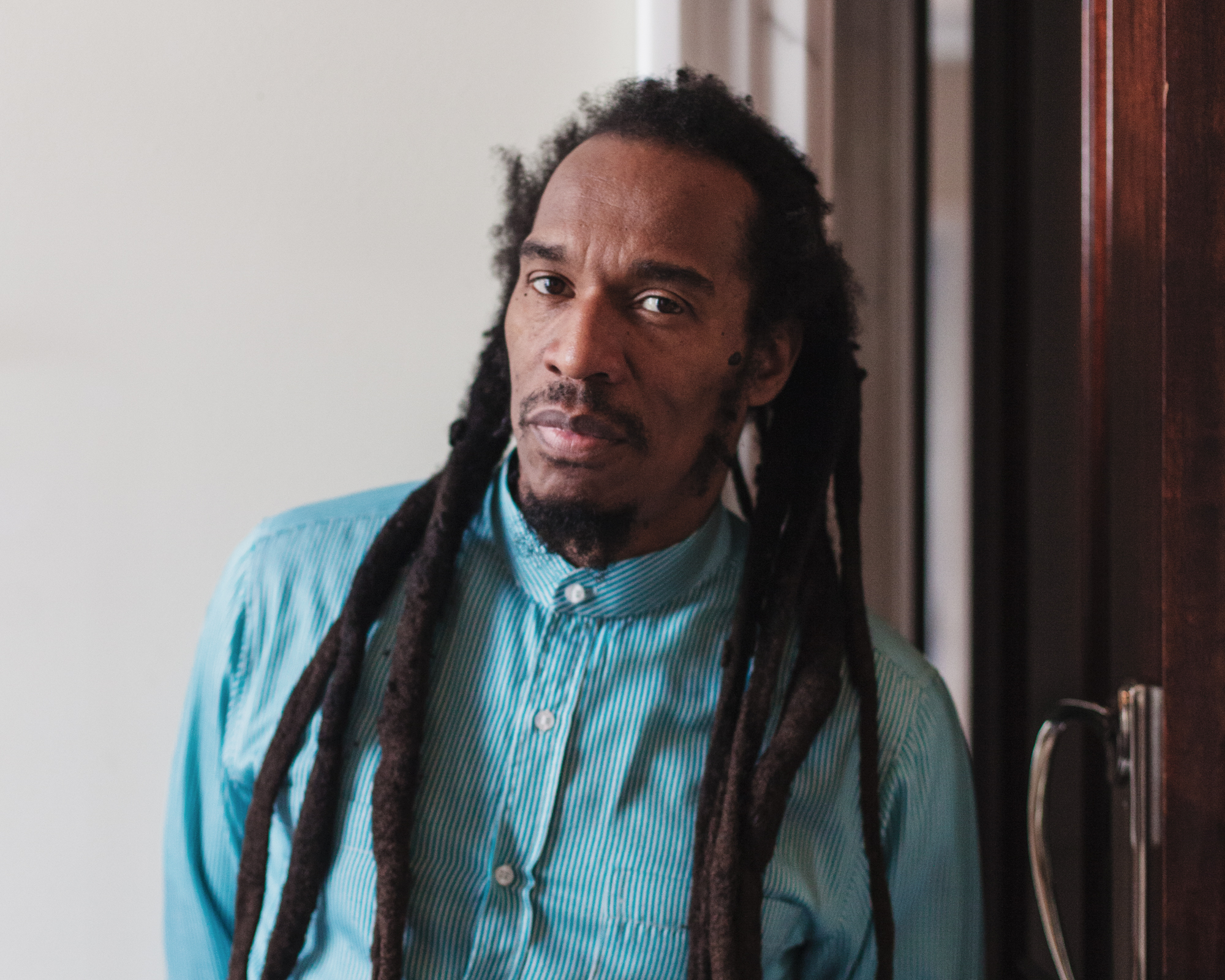 Do you think we’ve come a long way since then? Since that time, for instance, you were hit with a brick in a racist attack?
I hesitate, because I do think about how far we’ve come. I know a lot of people will say we haven’t come that far, but I have to be honest. I am a revolutionary, it’s not like I’ve watered down my politics. But I’m telling you, there are places we couldn’t go as kids. Areas that were hard National Front – pubs and clubs, where there would be gangs of racist skinheads chasing us. Of course, we come across them today still, but there were gangs of them who’d go out to beat us.

I just think racists are much more sophisticated now. They’re not skinheads, they wear suits. They’re in positions of power. There’s no need to go around on the streets to beat people up, but the threat to your life on a daily basis is not what it used to be. I don’t want to sound like there’s no racism – of course there is. We’re living through it. Things have changed, but racism hasn’t gone away.

Do you think it’s fair to describe the Conservative Party as a racist organisation?
This is the party that was racist to me, the party built on racism and empire. Now it’s the party of Windrush. The racism I experience that comes from institutions comes from policies from the Tory Party. The racist things I hear from politicians? The Tory Party. That has been my life experience, and I’m surprised now that isn’t coming up in conversation more.

Somebody once asked me when we were talking about animals what the strangest animal I’d ever seen was. I said a black Tory. To me, that’s a very strange animal. A couple of weeks ago I said Amber Rudd was going to have to go after the Windrush scandal. I said her replacement was going to be black or Asian.

Then Sajid Javid was appointed, you have Kwasi Kwarteng defending the government on Windrush. I’d go so far as to say they’re like house slaves. I have this poem: Dis Policeman Keeps on Kicking me to Death. There’s a line: he beat me so badly, I was on the floor. He said if I don’t plead guilty, he will kick me more. I was feeling sick, I pleaded ‘racist attack’. And another police came to finish me off, and he was black.’

The Windrush generation, campaigners and politicians discuss the scandal – tonight at 7pm on our special programme: #FightingToBeBritish. pic.twitter.com/80geAFUiwd

That is my experience. I was in a police station and I called an officer racist. A black policeman came in and beat me. We know that a black person in that position is going to want to impress his white counterparts. The black house slaves were the same in the days of slavery. They wanted to stay in the house, not to live out in the field. So they did whatever they could to impress their master. I hated being stopped in the 70s and 80s by a black copper. Because he’s going to try and impress his white friends.

In your real life experience, you can experience a racist policy from some government that’s being implemented by a black person. It just makes it a bit more difficult, because it’s not so, well, black and white.

A lot of young people are talking about political blackness, and whether it’s a term relevant in Britain today. What do you make of it?
From my own experiences, I’ve come to the conclusion that political blackness, or what I call black, is basically non-white. I’ve been arrested at police stations, taken into customs at airports – back in the days when they’d give you a good beating. I was arrested with other black people, who were lighter-skinned than me, and I’ve been arrested with Asian people. I can tell you, in all of those cases, nobody got a lighter beating because they were lighter-skinned. We were all ‘Pakis’ or ‘niggers’ together.

There was a stronger sense of unity, not a breakdown between groups as we have now. There was no talk of Nigerians and Jamaicans, of black British and non-black British. We know that the enemy didn’t discriminate against us like that. 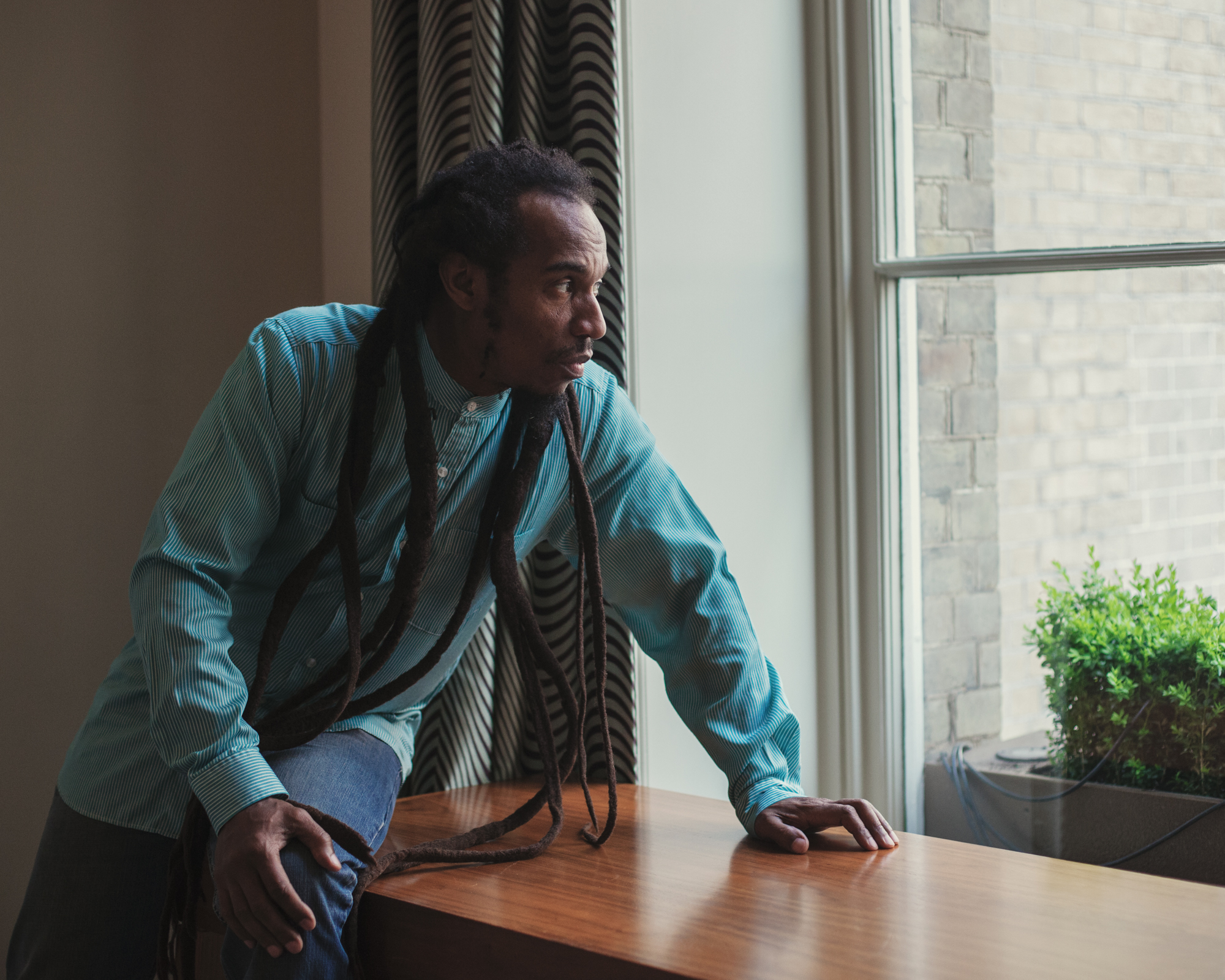 Do you think that Britain as a country is racist?
I do believe that if there was a straightforward vote, right now, which asked whether black people should be kicked out of Britain, then we’d be out. There’s a real problem in society, and this began whenever someone decided to call Britain ‘Great Britain’. Singing songs like Rule Britannia – ‘we’ll never be slaves’ – when Britain was enslaving other people. When some people promised people in Britain that this green and pleasant land would forever be safe for white people and only white people.

Black people would be in the colonies, under their control. You wouldn’t have to encounter them, unless you went to the colonies in which case you’d be privileged over them. It’s all gone.

A lot of people were seemingly very surprised by the Windrush scandal, but I imagine you weren’t.
Not at all, I was talking about this years ago. A lot of us were. Within the black community, we’ve seen people going back to Jamaica and having trouble getting back in here. It doesn’t surprise me at all. The average person is now interested because they’ve been caught red-handed. When you look at the individual stories you’d have to be heartless to say it doesn’t matter. It’s not new.

The compensation – people have lost jobs. There needs to be a no questions asked approach to the Windrush generation. If you came over then, and there’s something not quite right about your documents it shouldn’t matter. The hostile environment policy must also end, although I don’t think it will. Theresa May is trying to frame this as ‘illegal’ immigrants v legal immigrants. I support illegal immigrants. The most illegal immigrants I can ever think of are the Europeans who colonised the world. Unless the way politics is taught at school and debated in the media changes, I think immigration will always be seen as a problem in the UK.

The Life And Rhymes Of Benjamin Zephaniah is published by Simon & Schuster. Tickets to his upcoming tour are available now.

Linkedin
RELATED ARTICLES
OTHER ARTICLES
Rhiannon Adam spent three months capturing an ageing society wracked by division, isolation, and the aftermath of scandal.
In his 2008 series, the photographer pictured himself as Angela Davis, Martin Luther King Jr., Malcolm X, and other prominent figures.
Birdy Chu reflects on documenting the historic moment in which the territory was formally passed back from the UK to China.
As the Scottish government announces a rent freeze, an activist with Living Rent who fought and won shares how they did it, and what must come next.
Photographer David Corio’s archive offers a glimpse inside a revolutionary era of music and nightlife.
Financial turmoil is pushing people who work in the sex industry into more dangerous and desperate situations as a means of survival.