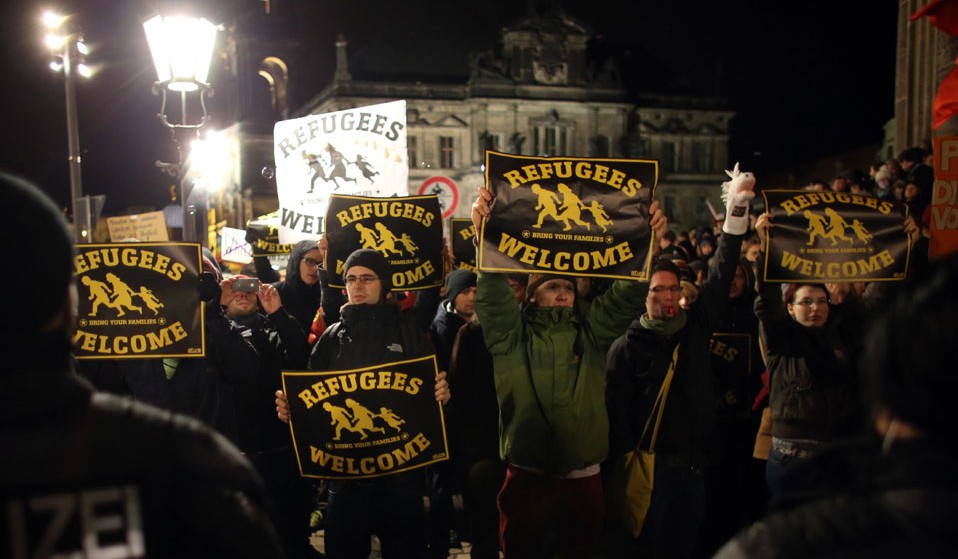 Anti-Islam group PEGIDA is rallying against multiculturalism across Germany but now there is a resistance movement fighting back.

Anti-Islam group PEGIDA is rallying against multiculturalism across Germany but now there is a resistance movement fighting back.

Since October, a group called PEGIDA (Patriotische Europäer gegen die Islamisierung des Abendlandes or Patriotic Europeans against the Islamisation of the West) has been holding weekly marches in Dresden.

On Monday this came to a head when protests against the growing presence of these marches happened in many cities across Germany as a stand against what the protesters see as a thinly-veiled excuse for racial hatred.

PEGIDA, though careful about what they say and made up of a mixed group of members, are against religious extremism and class Islam as dangerous, unwanted and too influential in German society and culture (as you can probably guess from their name). They have a 19-point manifesto that expresses their wish to protect Christian-Judeo culture in Germany and they oppose gender mainstreaming and political correctness. The PEGIDA marchers in Dresden were seen carrying flags and banners pronouncing things like, “Courage to be German,” “Freedom for Christians,” and, “Keep Germany for the Germans.”

Though the motivation and perceived large size of the PEGIDA movement is disheartening and the effort going towards intolerance and racism is shameful, PEGIDA only speaks for a relatively small amount of people. Far more important, progressive movements are happening not only in Berlin, but across Germany. I contacted some of the people of the forefront of the resistance movement to hear their take.

Lucy R, translator and protester based in Berlin

“I have German nationality now, and I would like Germany to be kept colourful.” Lucy R, a translator who emigrated from Britain to Germany and who last year became a German citizen, went to the Berlin protest where the protesters reportedly outnumbered the Pegida marchers 25 to one. “I went because I felt disgusted and worried and couldn’t bear to see the PEGIDA protestors taking over public spaces and spouting their ‘harmless’ racist slogans,” Lucy says. “It is pervasive and just the kind of UKIP/AKIP populist rallying that could lead to a serious acceptance of underlying xenophobic attitudes surfacing in Europe. There is a particular resonance when you see racism on the streets in Germany. It was a message to say ‘No, you don’t get to hog the streets and the limelight’.”

As Lucy and others have pointed out, the same football hooligans appearing at the rallies would have been cheering on the national football team made up of members of immigrant families in their win at last summer’s World Cup. This ‘selective hearing’ as she puts it, is the hypocritical picking and choosing of when – and indeed who – gets to ‘get away’ with being foreign. “My daughter is ten and I want her to understand that this is a very serious problem. She goes to a bilingual, mixed race school, so half of her best friends would be seen as undesirables. Albeit not ‘criminal asylum seekers’.”

‘Selective hearing’ definitely extends to the founder and leader of Pegida, Lutz Bachmann, whose criminal record for drug dealing and burglary is brought up time and time again in national news sources. The Pegida manifesto includes a ‘zero tolerance’ stance for immigrants with criminal records. Often when a crime is committed by a member of a persecuted group it’s spoken about as being intrinsically linked to that person’s religion, race or nationality (or gender or social class, and so on) and used as an example of why that group can’t and shouldn’t be fully accepted within a society; something that certainly does not happen with the white male national for example, who is regarded as a one-off bad egg, or reformed.

This is what happened with the recent grooming scandals in the north of England, and why Muslims and undesirable nationalities are equated with only the most dangerous individuals and religious extremists of any given religion or race as the only way of understanding them. Pegida were quick to use Wednesday’s massacre of employees of satirical magazine Charlie Hebdo in Paris to support their cause on social media.

Laura D, protester based in Berlin

Protesters feel that PEGIDA manipulate German citizens’ economic fears to drive up hatred towards immigrants and Muslims. “The economic crisis is what makes people irrational and aggressive. UKIP in the UK is using the same mechanism of fear, ignorance and economic imbalances,” says Laura D, a German who moved back to Berlin from London last year. “One of the banners at the antiracist demonstration in Berlin said, ‘It would be better to worry about the banks,’ and I think that’s true. It’s sad to see that it’s easier to hate a poor refugee receiving €500 or someone wearing a headscarf than a concept like ‘neoliberalism’.”

Laura attended the #NoRacism protest in Berlin to speak out against what she calls “racist propaganda disguised as patriotism”: “People fear what they don’t know. Xenophobia is a problem in the areas of East Germany where little or no foreigners live. In general Germany is very white; at least that’s how it felt when I came back from living in London. The German population is still very homogenous, class and ethnic differences are not as pronounced as they are in the UK. Little changes to this homogeneity cause great unrest.” Germany’s history of immigration is still quite young compared to countries like the UK, and it goes without saying that racial intolerance – any kind of intolerance – is a highly sensitive topic. This is what both partly explains this week’s anti-immigration/pro-Nationalist rallies, and simultaneously makes them so outrageous.

Many, including Laura, are frustrated at the government’s slowness to respond or engage with the growing PEGIDA movement. Though German chancellor Angela Merkel spoke out against PEGIDA in her New Year address, Laura believes the silence is why the rallies grew in the first place, with as many as 18,000 people marching in Dresden. “They felt no opposition,” she says, “It has become possible to voice very right-wing and xenophobic positions because politicians have been afraid to say that these protests against an alleged Islamisation of Germany are stupid nonsense. I’m very worried about nationalist parties growing stronger all over Europe.”

Lucy Thomas, Development and Project Manager at Give Something Back to Berlin

“Many of the followers are likely to be disenfranchised voters seeking a way to be heard…we need to open the channels of communication, but not at the cost of tolerating extremist, dangerous views,” says Lucy Thomas, Development and Project Manager at Give Something Back to Berlin. GSBTB is a social initiative that enables global migrants from all over the world to volunteer and share their time and skills with diverse Berlin community projects. “At GSBTB we all see ourselves as global migrants. While we have some projects that support refugees, we do not see ourselves – whether expats or locals – as being ‘different migrants’ than refugees…we all come to Berlin and Germany for many different reasons and we all bring a rich diversity of skills, interests, energy and experiences with us that can only benefit society.”
GSBTB enables all people to participate in the social fabric of Berlin through volunteering, networking and community building whilst viewing all new Berliners as the same, regardless of religious beliefs, legal status and life experiences.

It was important for Lucy to attend the anti-PEGIDA protest in Berlin due to the work she puts in to bring about creative alliances, educational partnerships and cross-cultural understanding with GSBTB. She sees the problem of intolerance coming from a lack of real connection between the many communities that make up Berlin: “I believe the sentiment of the PEGIDA movement is misplaced. Many demonstrating have had little or no contact with German Muslims or other non-Germans. Berlin has an inspiring and long history of effective political activism, most recently seen with the refugee rights movement, and is one of the reasons these types of demonstrations are so successful here.

“I have seen some of the types of racism that many communities face, within both the refugee rights movements and against those from many other migrant backgrounds” Lucy reports, “but there is a parallel movement in support of an open, welcoming and inclusive society in Germany. This is perhaps best portrayed by regular German citizens opening up their homes for refugees to live with them.
“Many great new social initiatives are tackling the problem of perceived distance between migrant and local communities and the list is rapidly growing. It is only a start, but many do feel a sense of positive change.”

Learn more about Give Something Back to Berlin.

Jen Calleja is a writer, literary translator from German and editor of Anglo-German arts journal Verfreundungseffekt.

Linkedin
RELATED ARTICLES
OTHER ARTICLES
The murder of 12 people at French newspaper Charlie Hebdo on January 7 was not the act of a world-conquering empire. Beware the man - or woman - who tells you otherwise.
Illustrators and cartoonists around the world rally around to show solidarity for those murdered at Charlie Hebdo magazine offices in Paris.
In the aftermath of Ferguson's grand jury decision on Michael Brown's shooting, Ted Endo dynamites whatever crumb's left of the mythologised American dream.