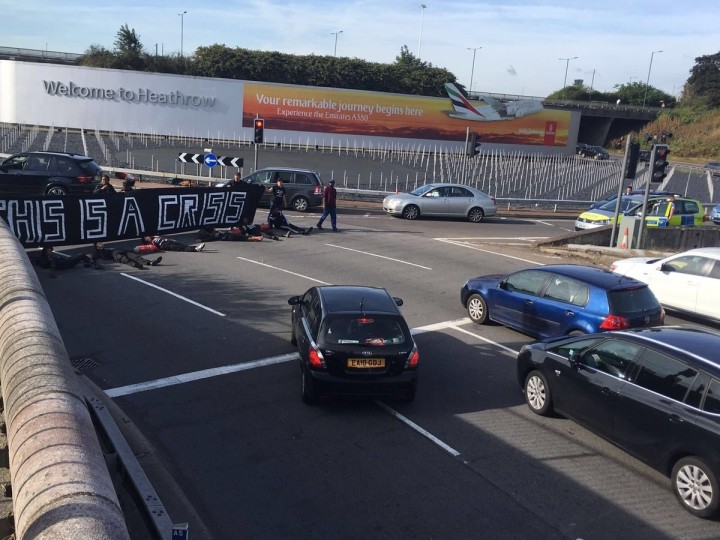 Black Lives Matter campaigners have shut down roads leading down to Heathrow Airport and other city centres in the UK this morning in a day of action.

Black Lives Matter campaigners have shut down roads leading down to Heathrow Airport and other city centres in the UK this morning in a day of action.

This morning Black Lives Matter activists have shut down roads in London, Birmingham, Manchester and Nottingham in the first wave of actions by the UK’s Black Lives Matter movement. Their actions, they say, are driven by a desire to mourn those who have died in custody and to protest the ongoing racist violence of the police, border enforcement, structural inequalities and the everyday indignity of street racism.

The main road up to Heathrow Airport remains blockaded, as activists welding banners locked themselves together on the road. Similar scenes were visible in cities across the UK, and a large protest is planned for central London this evening.

Full #Shutdown in London. Motorway closed. Police have made at least 4 arrests pic.twitter.com/QyA7COd46p

“We have chosen today for our action to commemorate the fifth anniversary of Mark Duggan’s death at the hands of the Metropolitan Police”, they say in a statement. “We stand in solidarity with the families and friends of all who have died at the hands of the British state. We take action because justice has not been delivered through conventional means: the police, the IPCC, the courts or the legislature.”

^That's in London. This is Birmingham. #Shutdown (via @MayaAnneEvans) pic.twitter.com/Xe1wJd12qB

According to the IPCC, Black people have been overrepresented by more than a factor of two for deaths in police custody since 1998., while they are 37 times more likely to be stopped and searched by the police than their white counterparts. This isn’t an American problem, it’s global.

UKBLM aims to highlight the struggle for Black Lives in the UK and #Shutdown state-sanctioned racialised sexism, Islamophobia, classism, ableism, homophobia and transphobia. We fight for liberation. The struggle is global, so must be the solution.

More on this story as it develops.

Linkedin
RELATED ARTICLES
OTHER ARTICLES
After building his reputation covering the US civil rights movement in the 1960s, the photographer went on to produce some of the most enduring images of the past century.
Author Edward Banches dicusses his new book, which examines the hard rock and metal scenes in five African countries: Botswana, Togo, South Africa, Kenya and Ghana.
A new exhibitions brings together the work of photographers who documented the deep unrest of these pivotal decades.
At his West Bank restaurant, Fadi Kattan established himself as the voice of modern Palestinian cuisine. Now, he’s bringing his innovative, bold flavours to the UK’s capital.
Theo McInnes’s photos of the annual event provide an intriguing snapshot of contemporary Britain.
After blocking the Scottish government’s gender recognition reform bill, Westminster is now devising further changes to the law to make it harder for trans people to self-identify.