News & Politics / Activism / Brazilians rise up against a far-right future 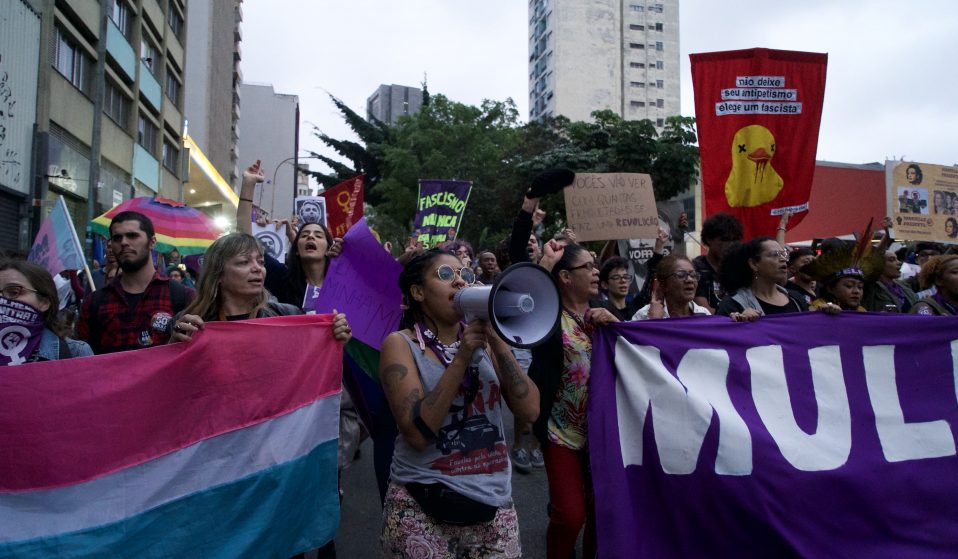 Activist groups across the country are mobilising against presidential candidate Jair Bolsonaro – a populist who has built a campaign from racism, misogyny and homophobia.

Activist groups across the country are mobilising against presidential candidate Jair Bolsonaro – a populist who has built a campaign from racism, misogyny and homophobia.

It’s October 6 in São Paulo, Brazil. Although the sky is heavy with the threat of rain, hundreds of people are gathering at the entrance of the city’s Museum of Art.

The crowds aren’t waiting for the opening of an exhibition, though. Instead, they’re here to begin a four-kilometre march, which will take them across the city to the Municipal Theatre in Ramos de Azevedo Square. Brandishing banners and placards, they are already chanting passionately – calling out the racist, misogynistic and homophobic presidential campaign of far-right candidate Jair Bolsonaro.

The #NotHim march – also known as the “Big Act Against Fascism” – is the second protest organised by the feminist group Women Against Bolsonaro over the last month. The first one, which took place on September 29, saw hundreds of thousands of protestors from across the country and around the world come out against the fascist candidate.

“I think that Bolsonaro and his voters became much more afraid after the first #NotHim protest,” says Andreza Delgado, a 23-year-old activist and Law student who helped organise the second march. “The movement got so big that he had to increase the spread of fake news.”

Earlier this month, Jair Bolsonaro shocked the world by winning the first round of the Brazilian elections. The political populist – who is being hailed as the Brazilian “Donald Trump” but is in reality much more extreme and dangerous – is a former army captain who spent 27 years as a congressman in the Lower House. His time there was marked by his radical view on public security (he believes police should have more freedom to kill suspected criminals), as well as his offensive rhetoric towards minorities.

So far, he has made several derogatory remarks about women – saying that they don’t deserve the same salary as men, and making comments about a lawmaker being too ugly to rape. He has also said that quilombola people (communities who have descended from slaves) “aren’t even good for procreating”, and that he’d prefer his son to die in an accident than be gay. 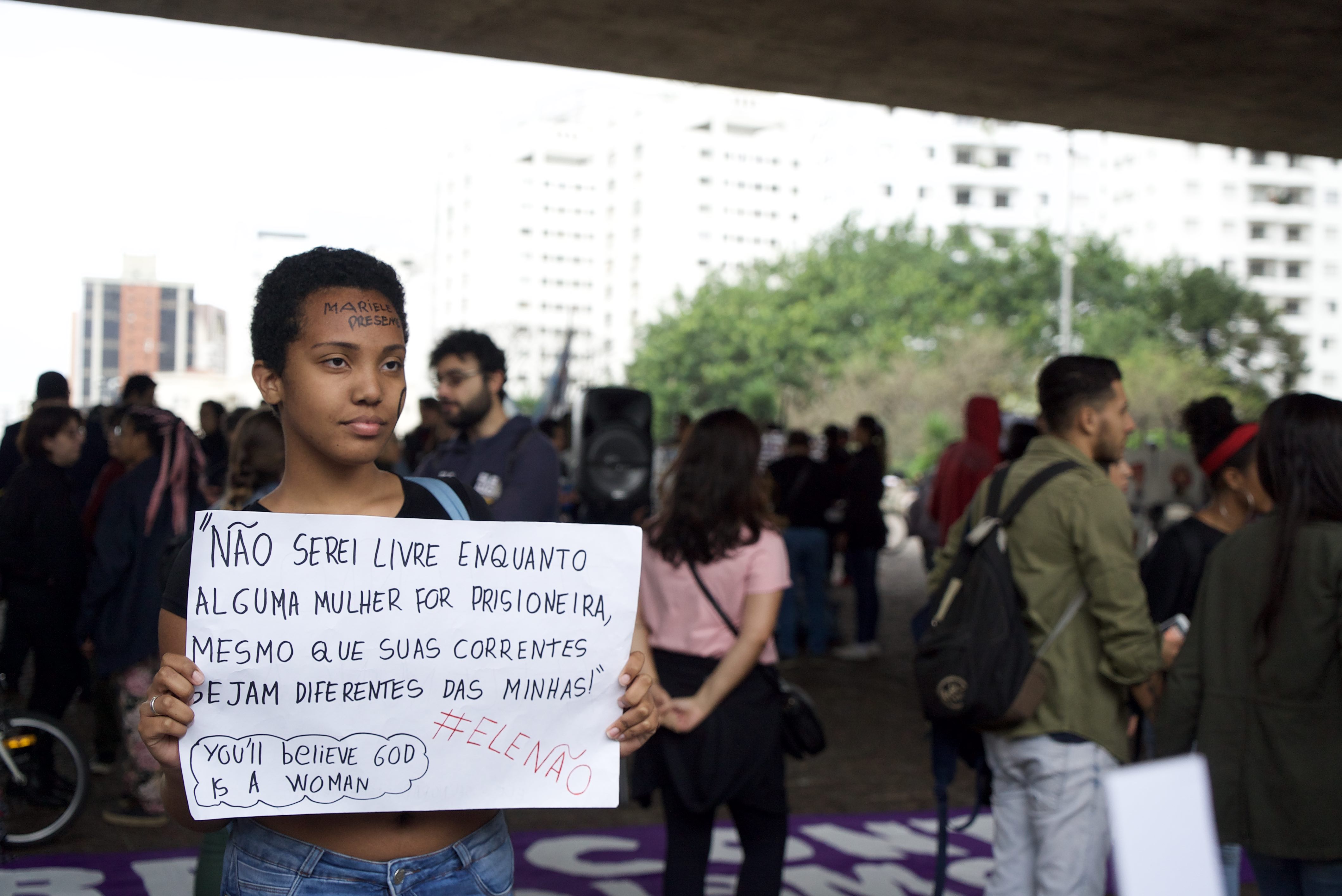 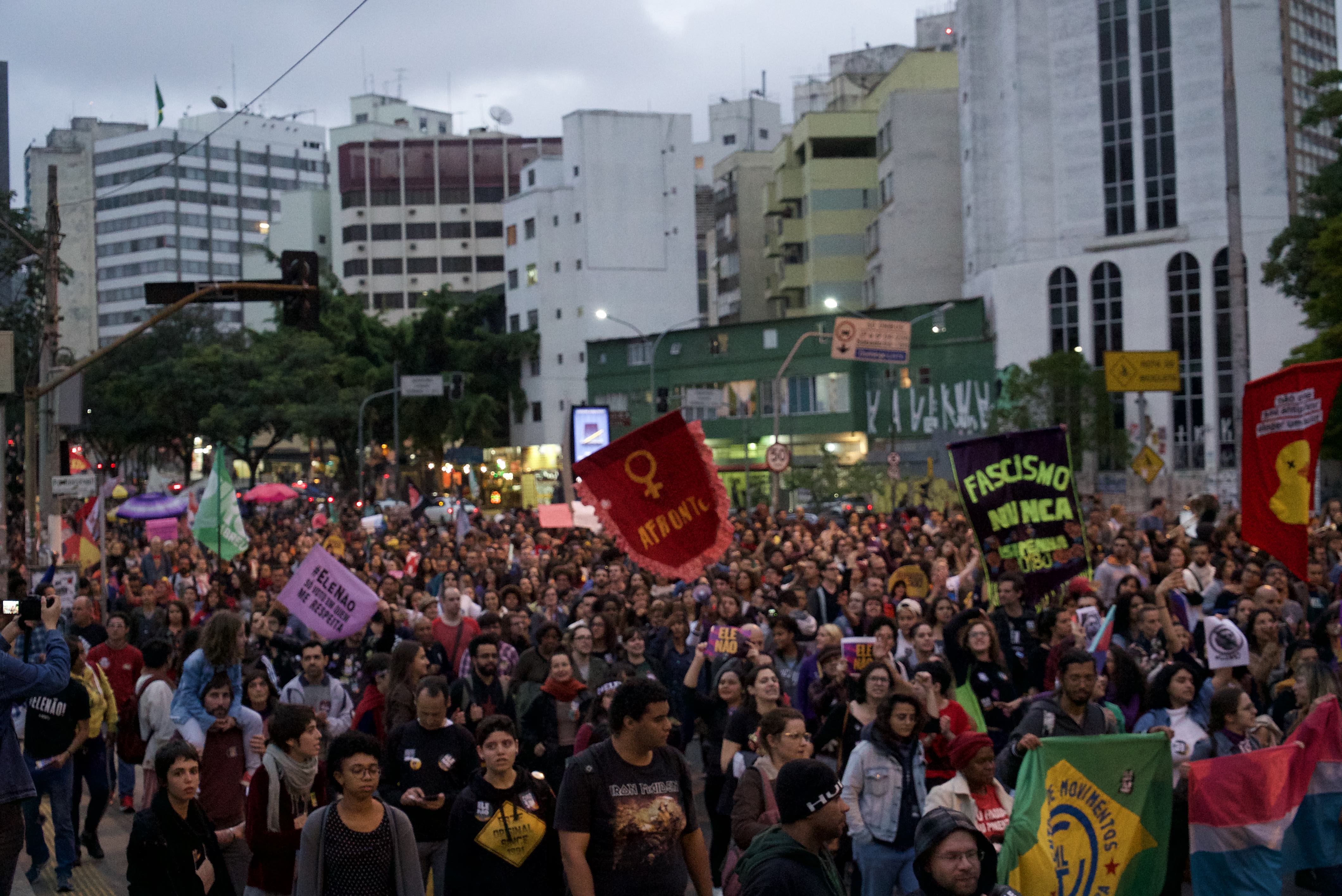 These toxic comments come at a difficult time for Brazil. According to the latest Amnesty International report, there has been a huge increase over the last few years in homicides among the LGBTQ community and young black people. Furthermore, recent research has revealed that the country is ranked fifth highest in the world when it comes to rates of femicide and domestic violence.

Andreza worries that levels of intolerance are increasing with each day in Brazil. The young activist tells me about the last time she took a taxi, when the driver started bad-mouthing homosexuals and sex workers. She says that he proudly stated that Bolsonaro would kill them all.

“I was very scared, because I’m a bisexual woman and I was alone at the time,” she says. “When I got home, I cried a lot.”

Twenty-three-year-old student Tamilis Gabriele is a member of Adelinas, a movement composed of black women that “battle against State terrorism”. Although she’s from São Paulo, she lives and studies at a college in Paranaíba, a rural city of Mato Grosso do Sul state. According to her, leftist movements in the area are faced with lots of resistance due to the conservative leanings of its people.

“I feel oppressed, and not represented at all by the presidential candidates,” she says. “We’re tired of this, and we’re willing to keep confronting it in order to change it.”

Bolsonaro failed to reach the required amount of votes (50 per cent) to win the elections outright. However, he came alarmingly close, achieving 46.3 per cent (49.2 million votes) against the Workers’ Party centre-left candidate Fernando Haddad, who only reached 29.28 per cent (31.3 million). The pivotal second round is set to take place on October 28, with numerous protests scheduled between now and then.

Whatever the outcome of the presidential election, Brazil is now faced with its most conservative Congress in history. In this race, it looks like the far-right wave is slowly turning into a tsunami. The clock is ticking. Time to fight back. 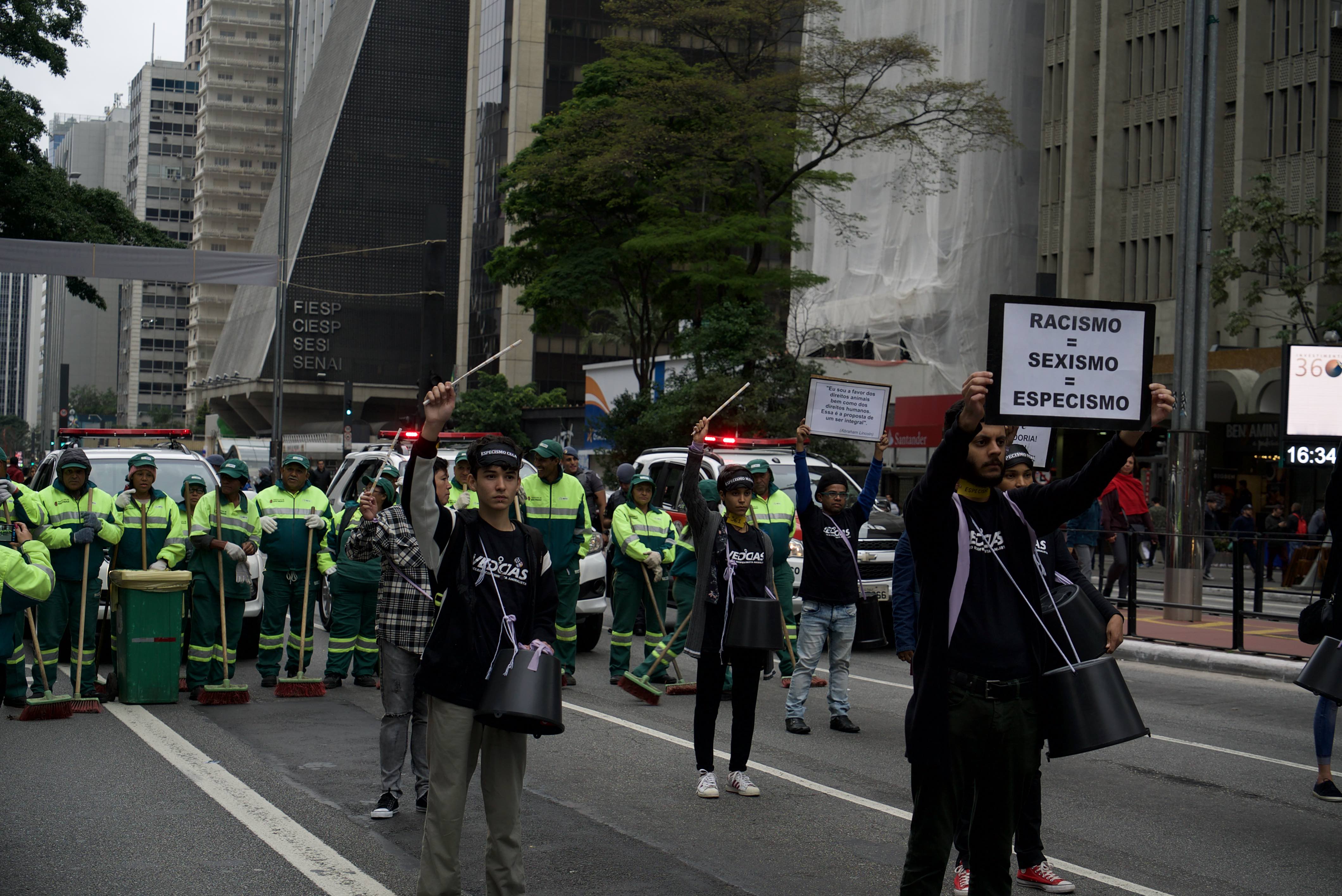 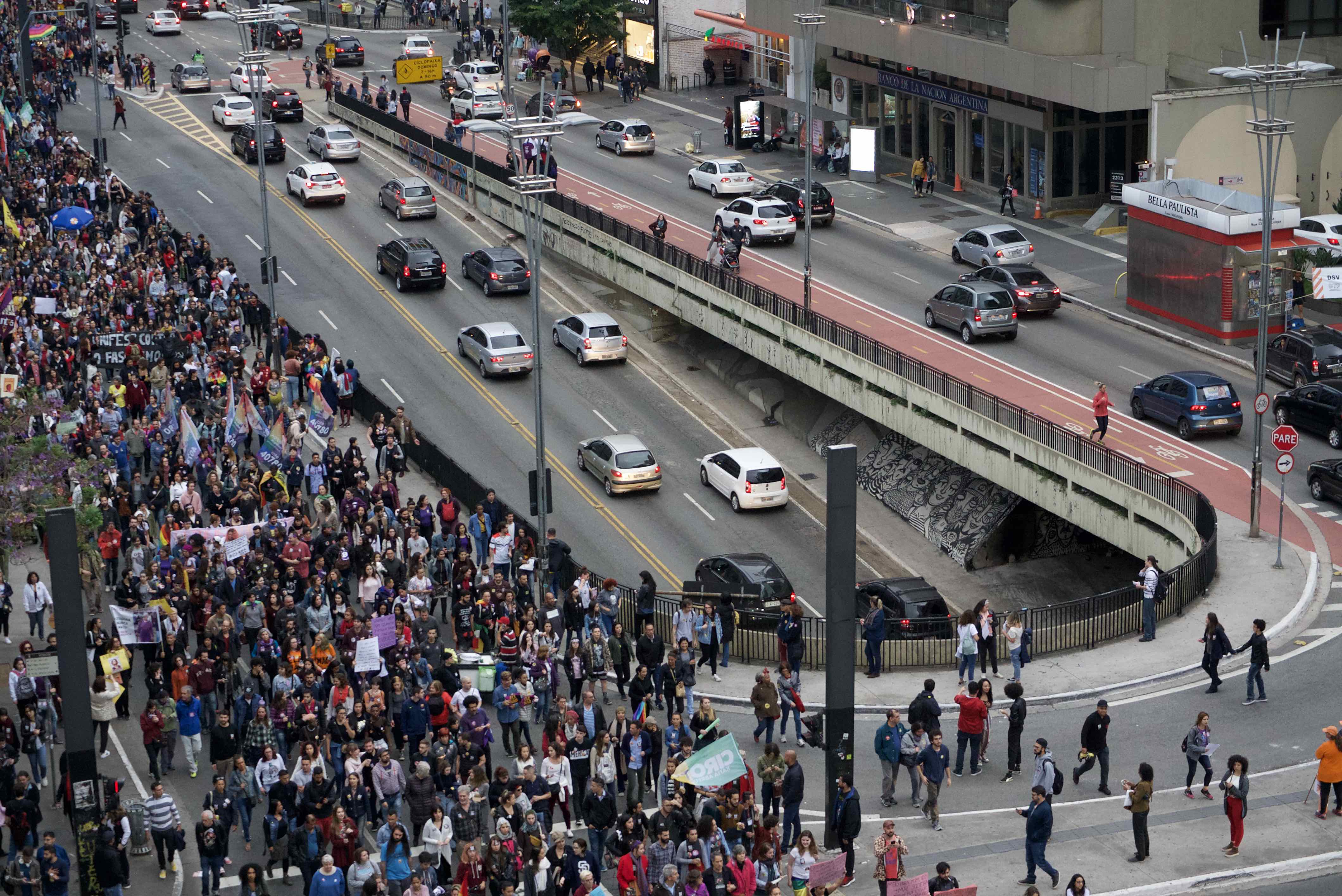 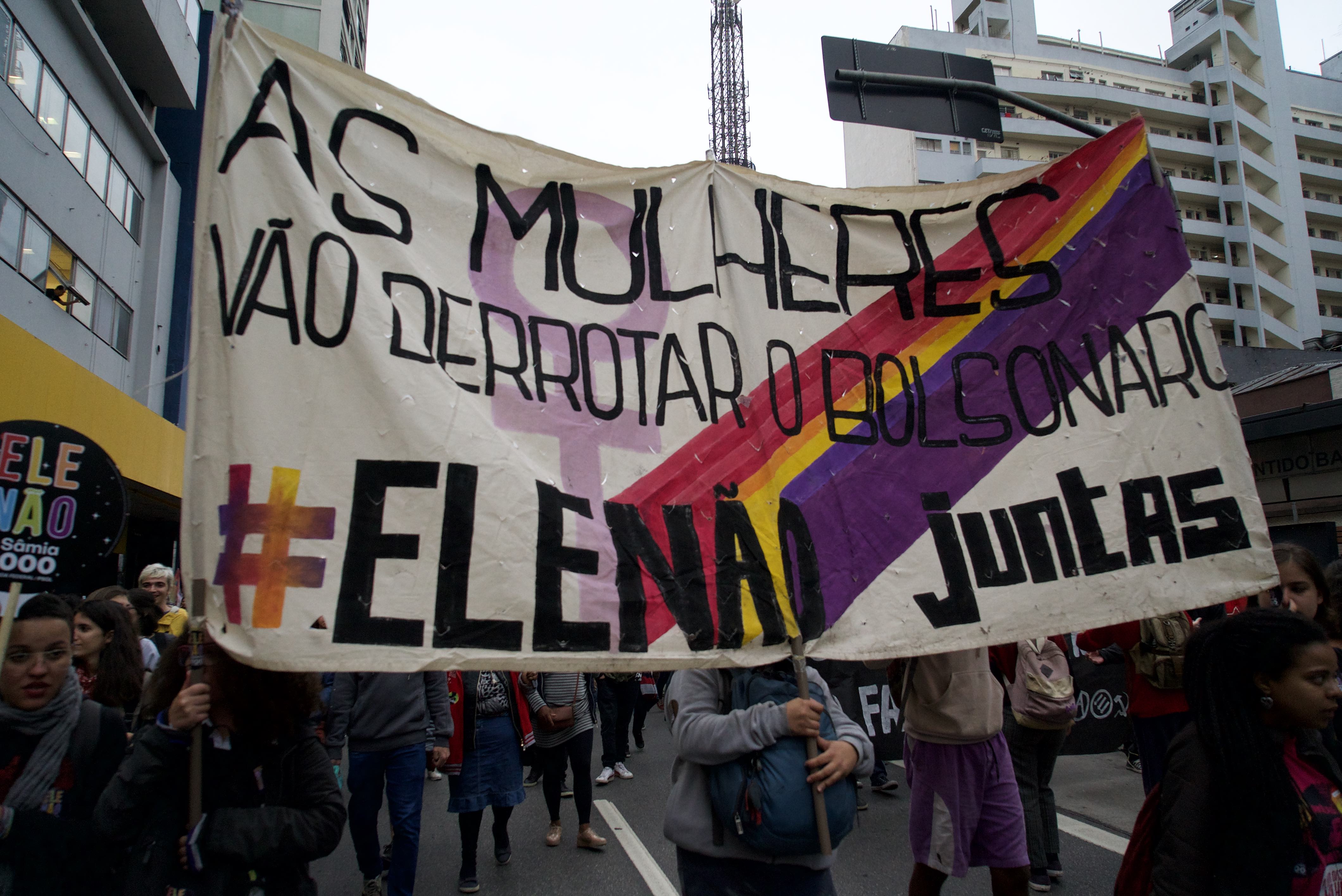 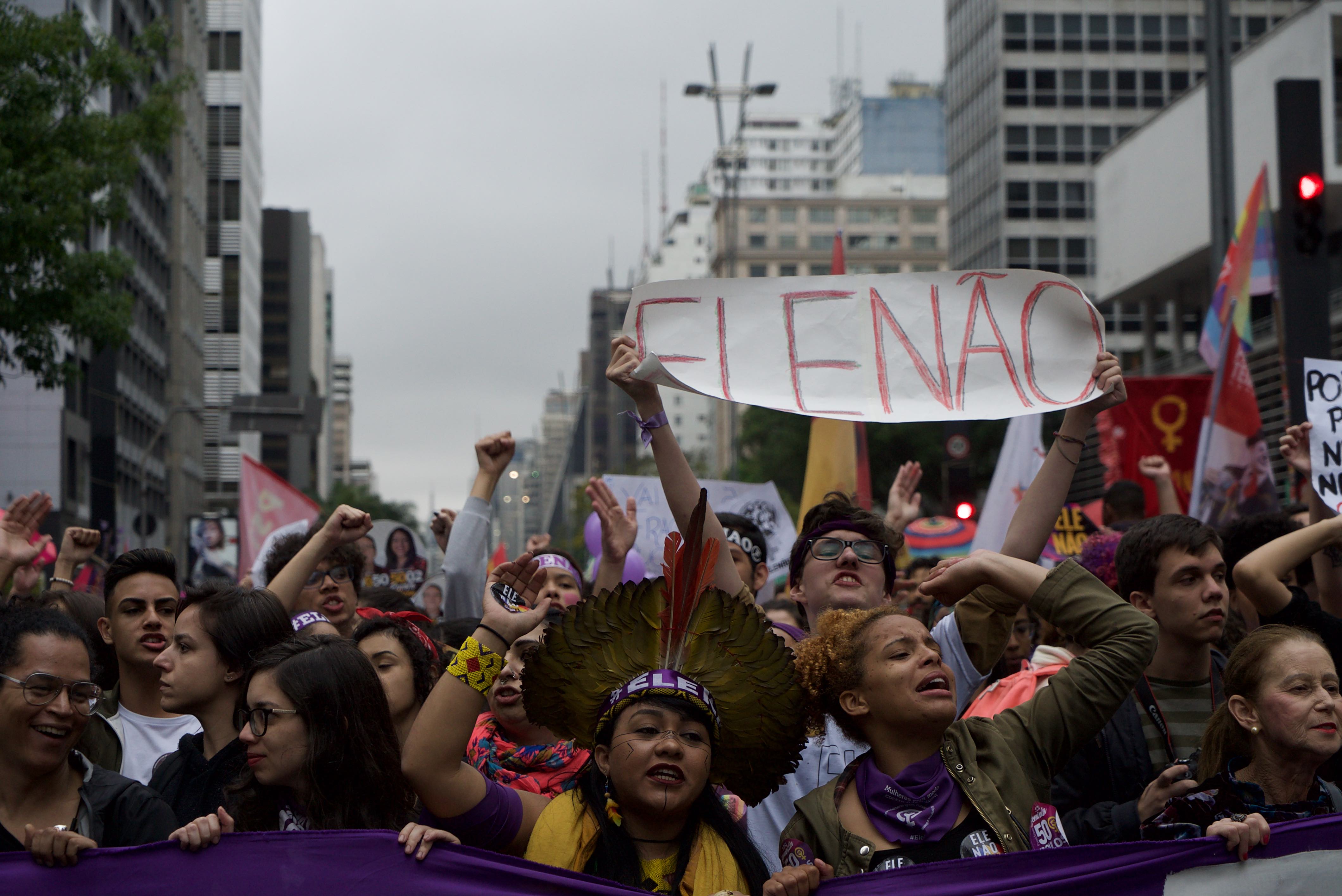 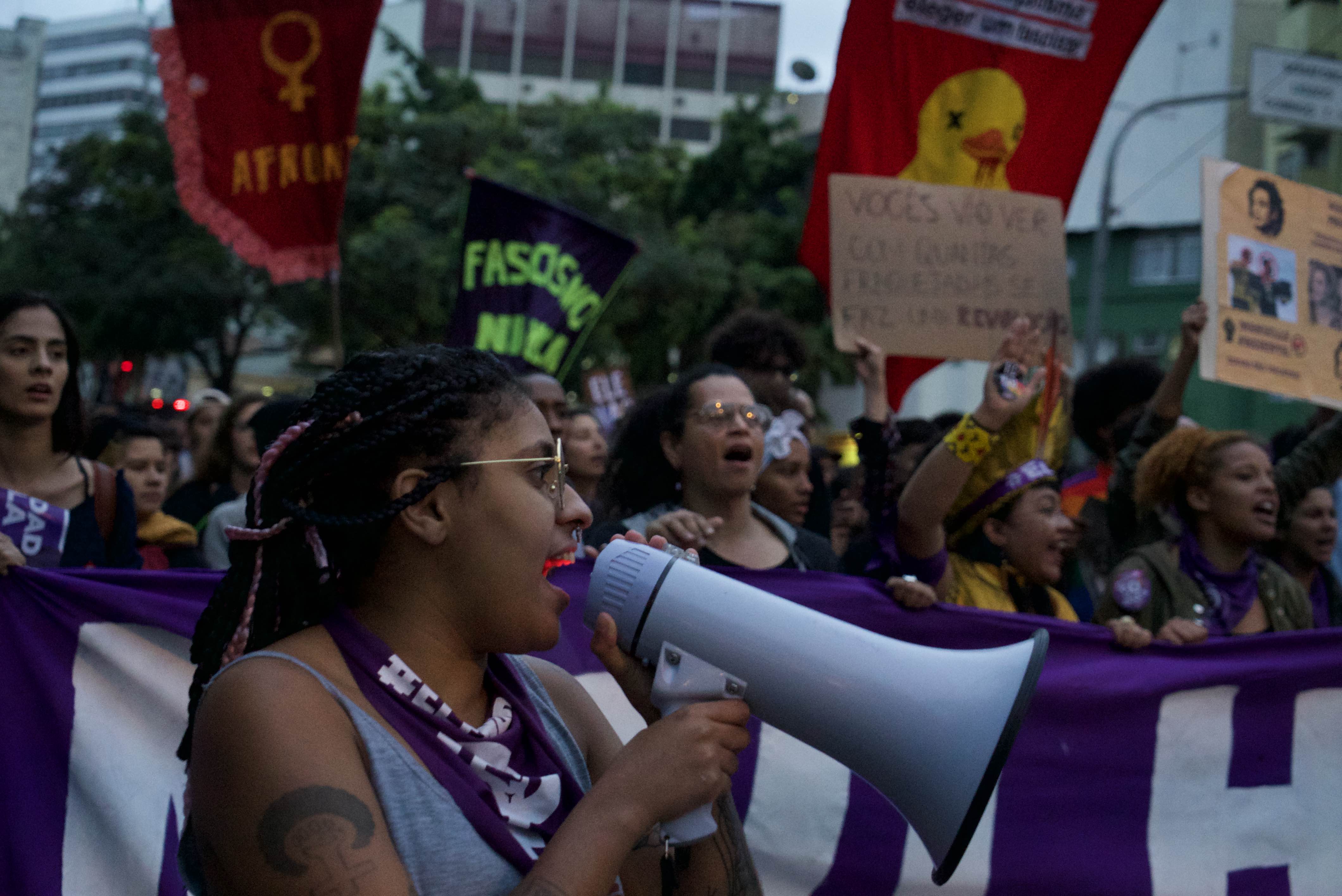 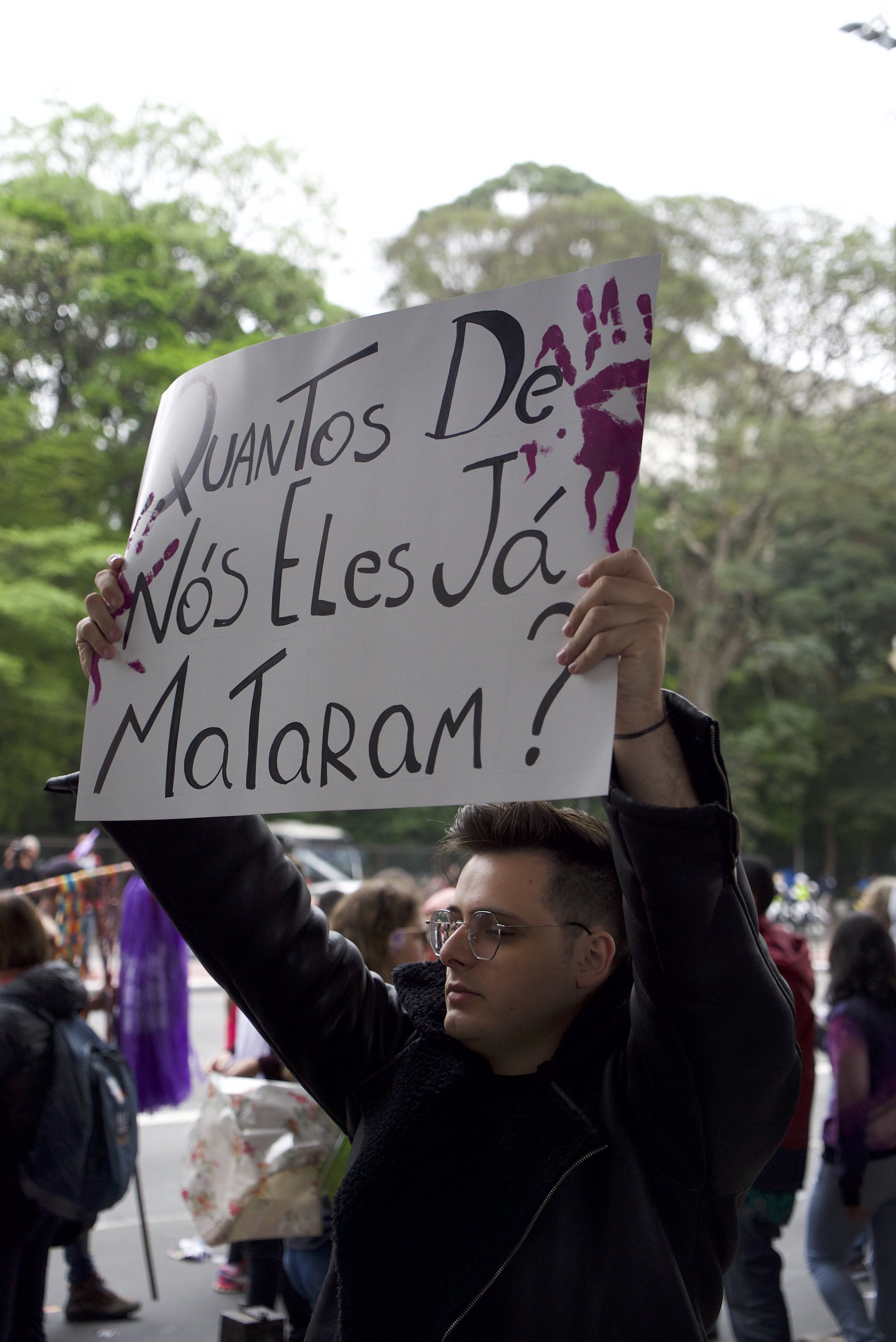 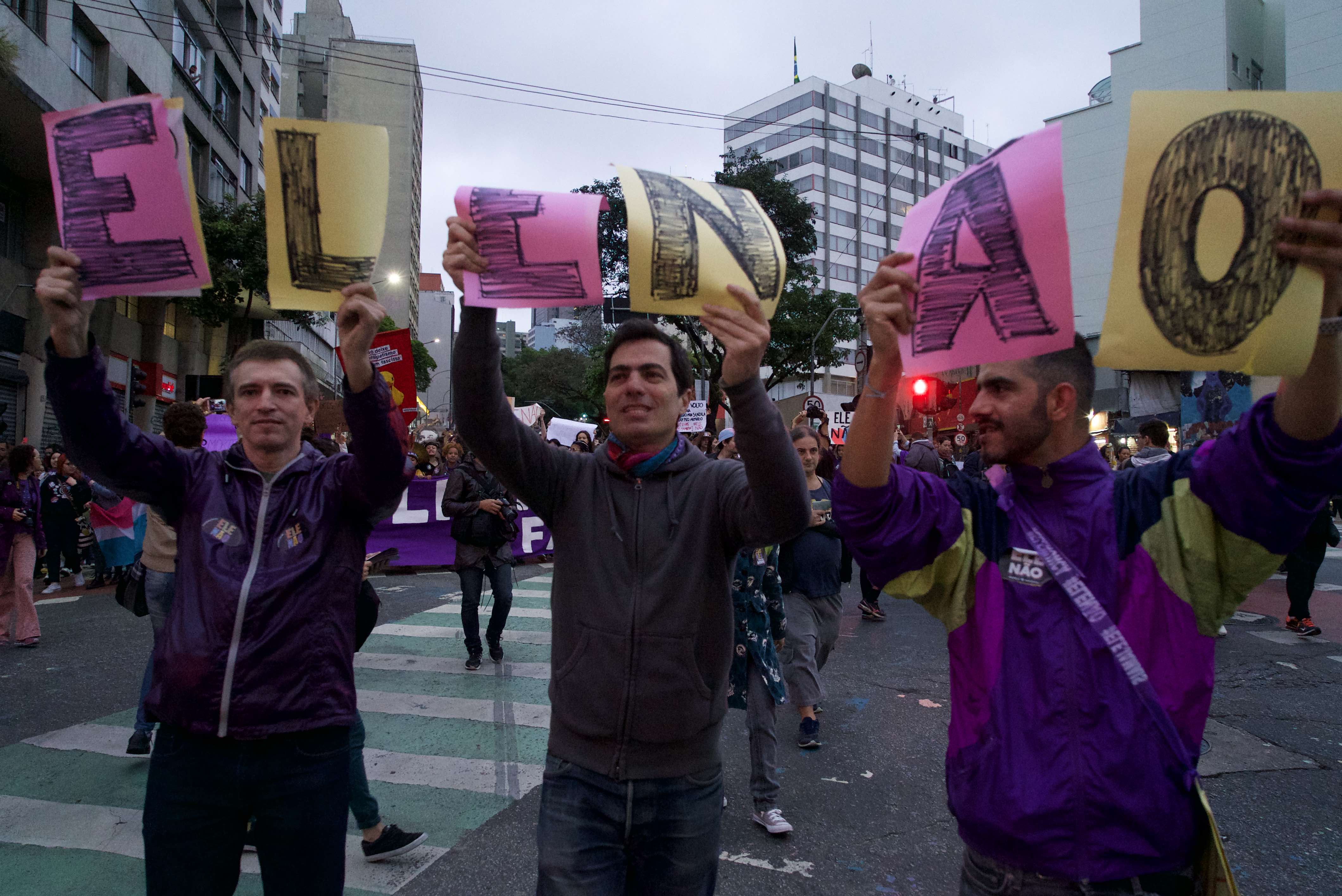 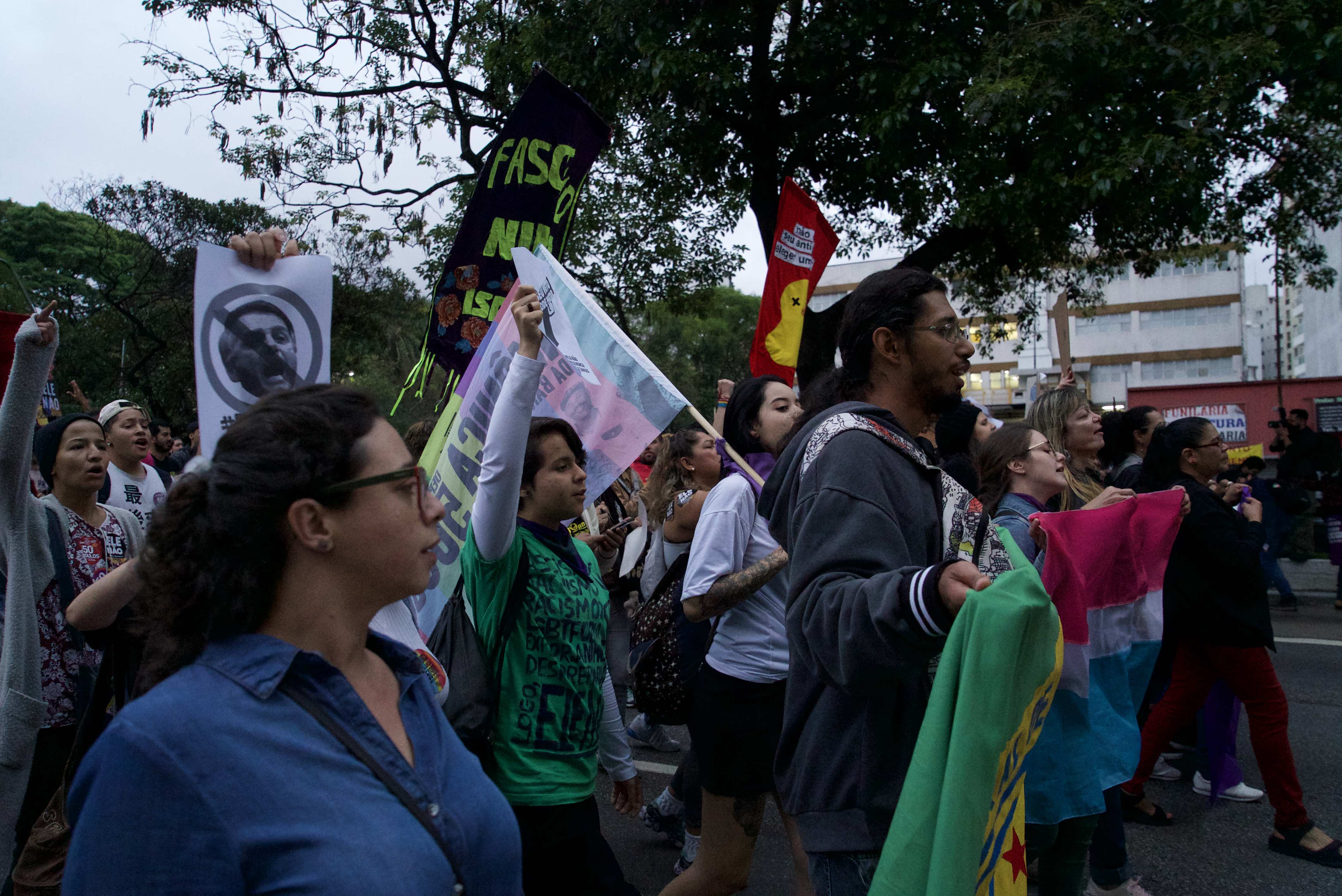 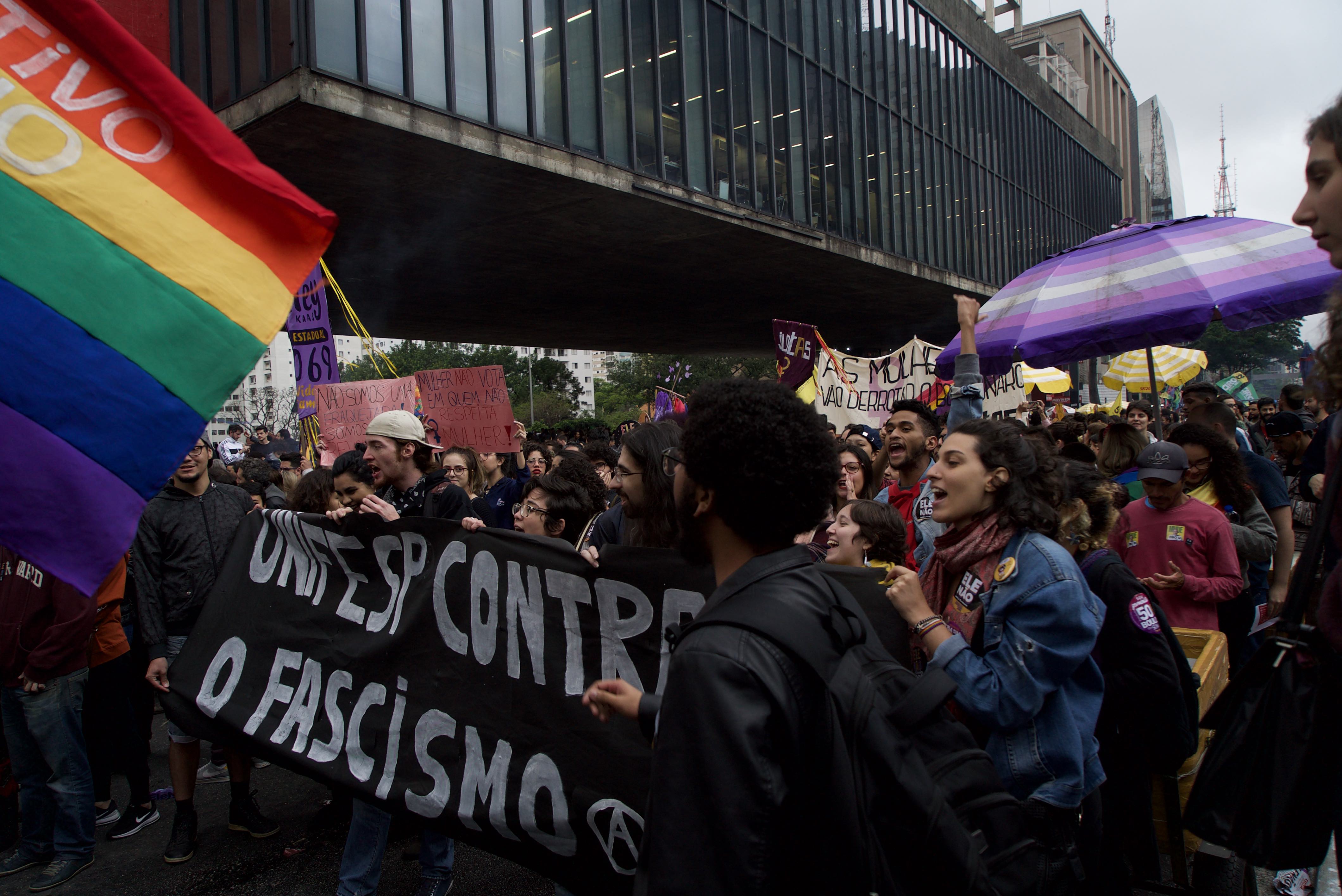 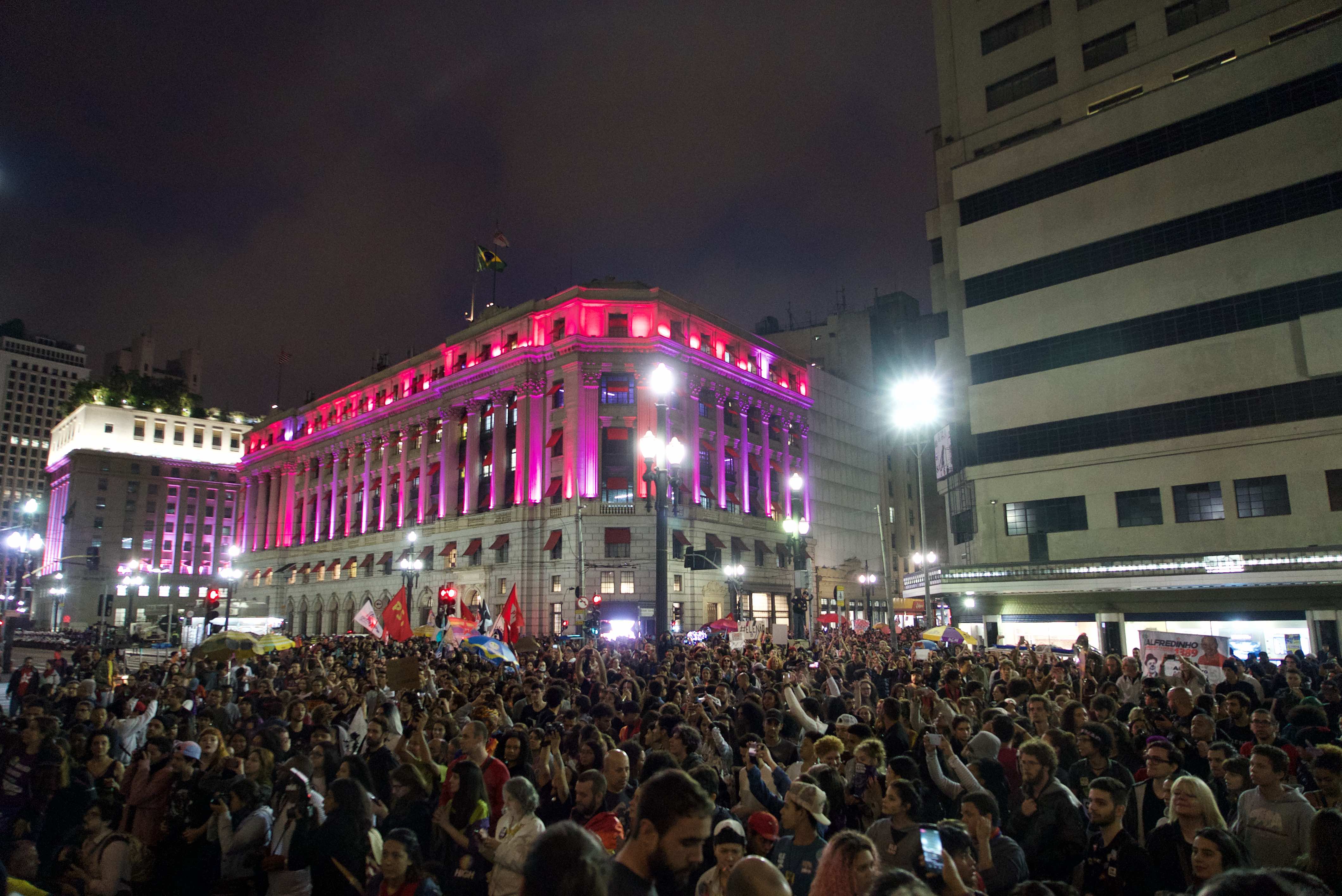 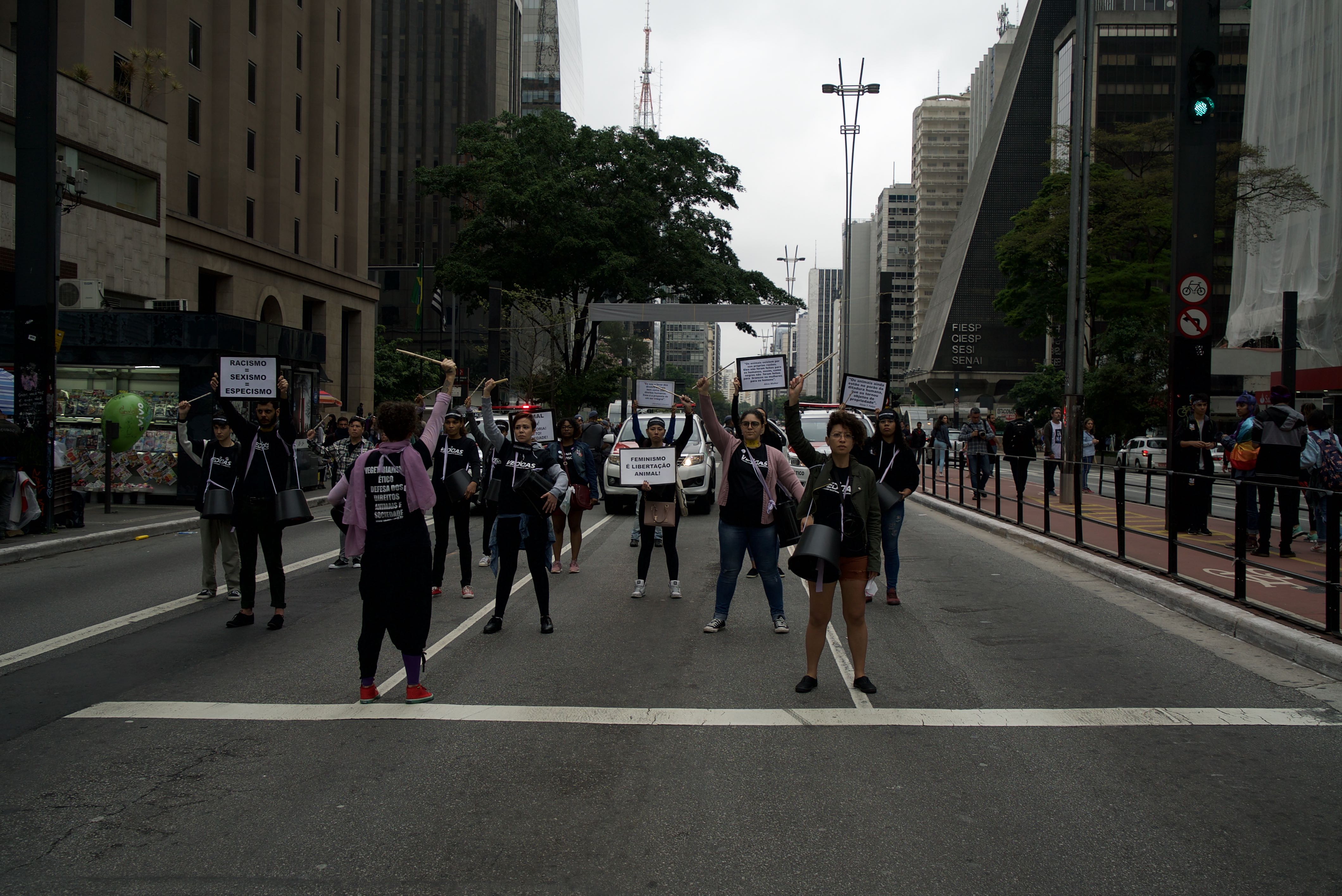 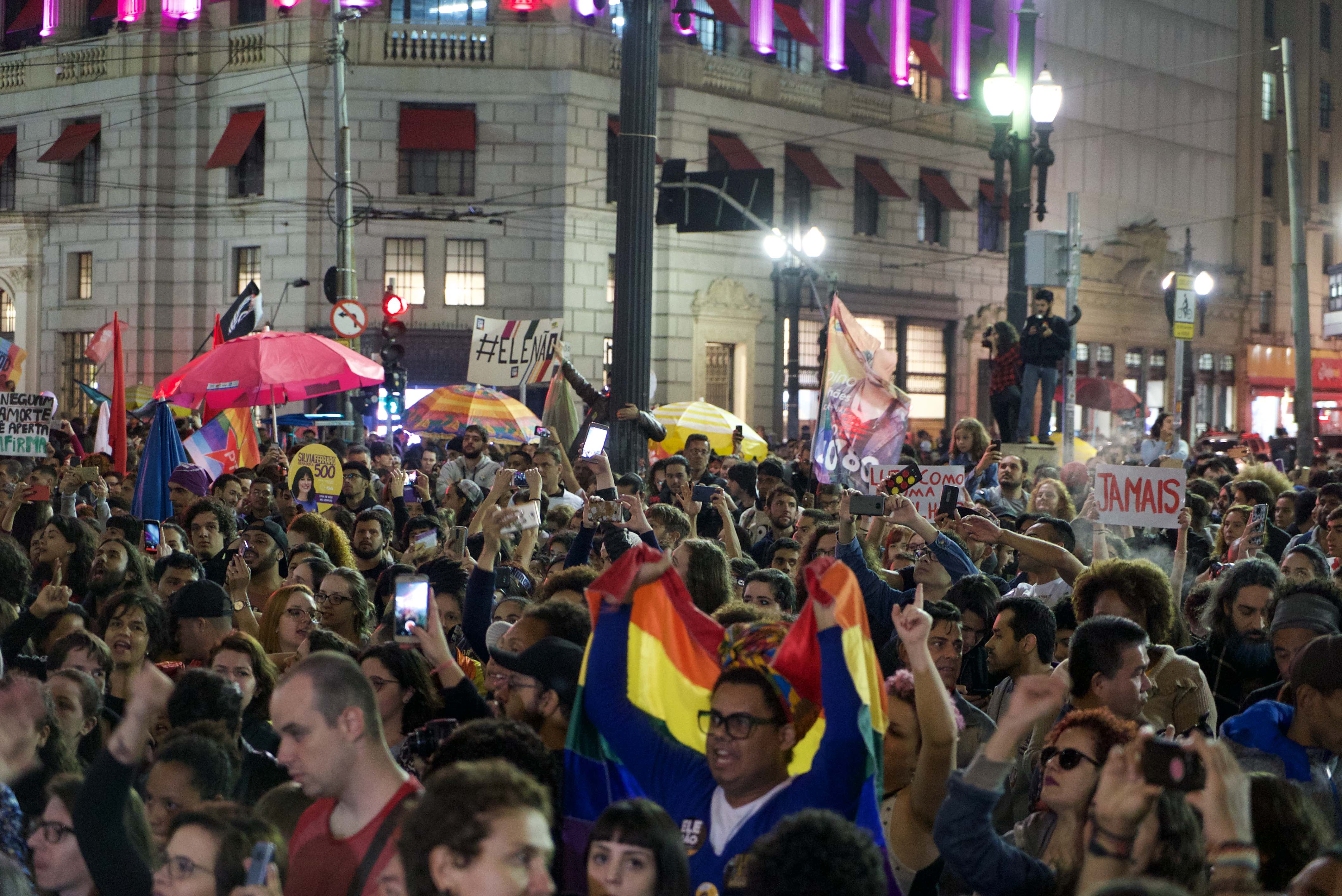 Linkedin
RELATED ARTICLES
OTHER ARTICLES
While protests over abortion rights rage in the US, access to abortion services is still almost nonexistent in parts of the UK.
The situation in Afghanistan remains dire, with many groups facing persecution at the hands of the Taliban.
Following the release of his latest album God Don’t Make Mistakes, the rapper talks horror villains, police brutality and being unafraid to show his vulnerable side.
In the last of our dispatches from OFFF Barcelona, Rufus Deuchler and Vincent Gault discuss the future of creative process.
The government’s failure to take long Covid seriously has led to the formation of a group campaigning for the thousands of forgotten victims of the illness.
In the latest OFFF Dispatch, the enigmatic designer dives into his process, connecting the dots between his unique and varied creative output.