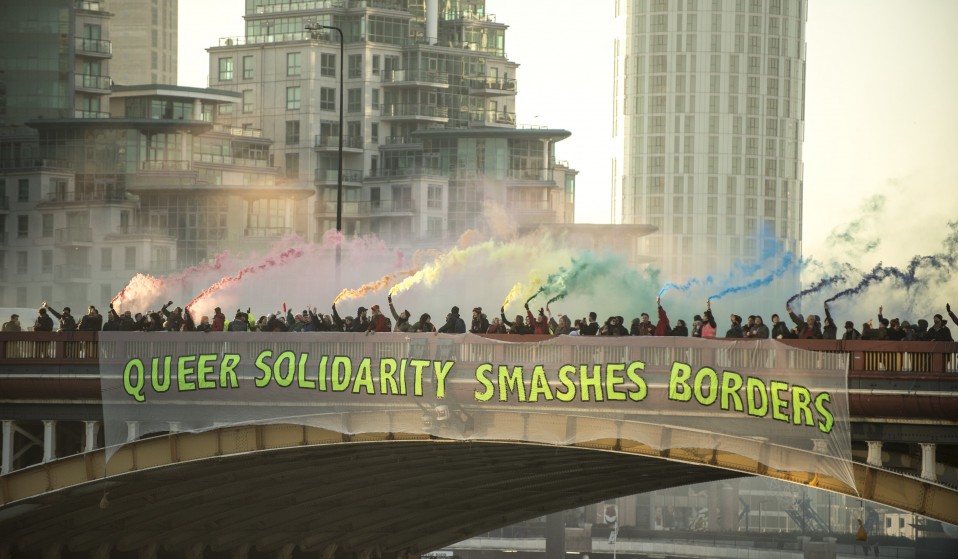 As the world wakes up on the day that Donald Trump is inaugurated as President, hundreds of activists take to London's bridges in defiance, with one simple message: Bridges not Walls.

It’s all too easy to feel hopeless right now. The world is veering sharply to the right, and as much as we’re desperate to grab the steering wheel and do what we can to change our collective course, this ship just keeps on going.

It’s not just the Trump inauguration. Across the globe we’ve seen a shift to divisive and hate-filled politics: the Brexit vote, far-right parties rising up across Europe, hate-crimes and prejudice skyrocketing to levels not seen in most of our lifetimes. But just hours before Trump is sworn in in Washington, activists in London are starting to fightback. 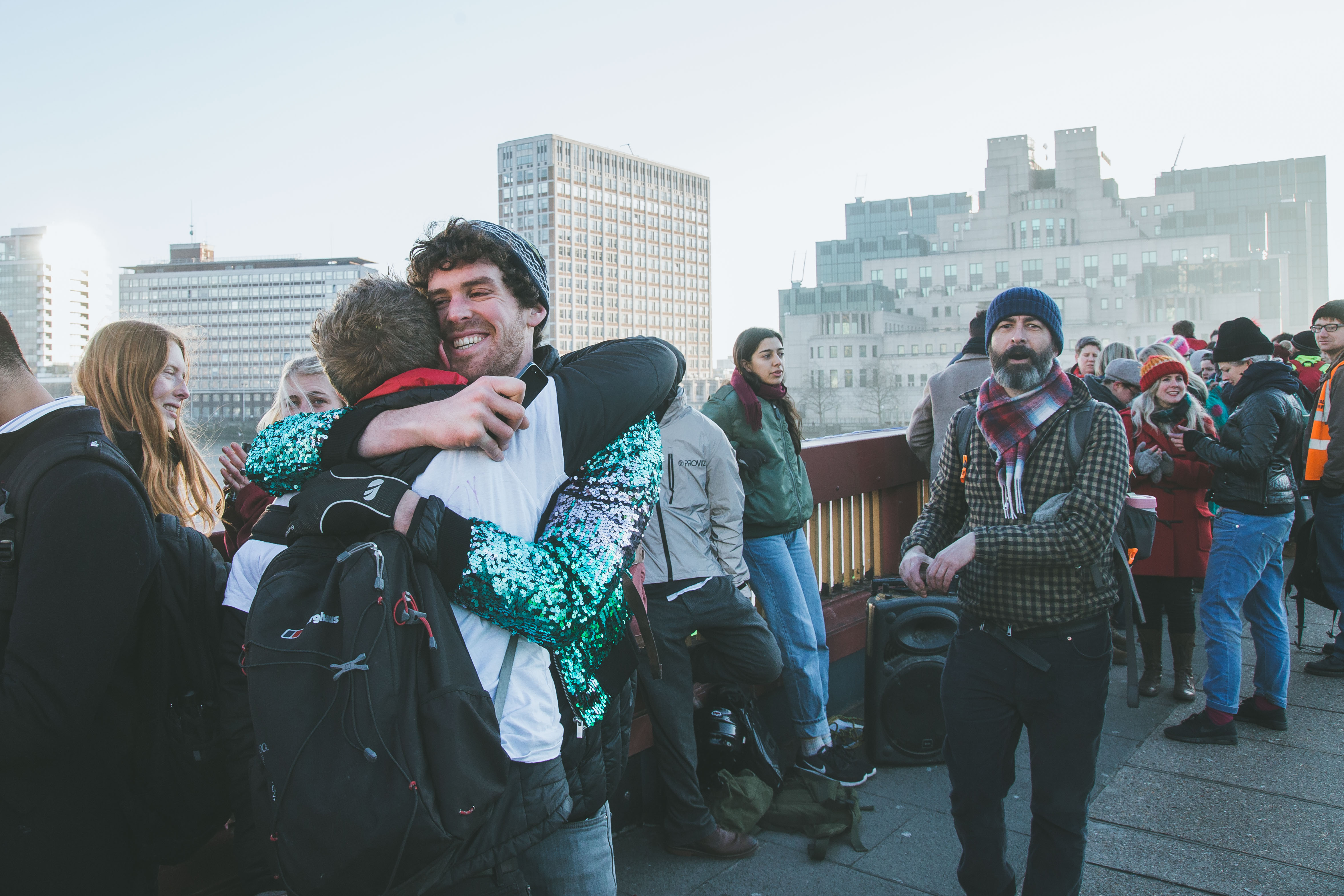 “This all actually started with a guy called Will”, explains Dalton Valeria, as we stand in the brisk morning sunlight on London’s Vauxhall Bridge. “On the day after Trump got elected he was like ‘we need to do something about this, we need to send a message of hope to the world’”.

Will contacted some friends, desperate to show some act of defiance, of outrage, as the reality dawned on him that Trump would be the next President of the USA. Word spread, and that’s when Dalton, born in New Mexico now living in London, got involved. 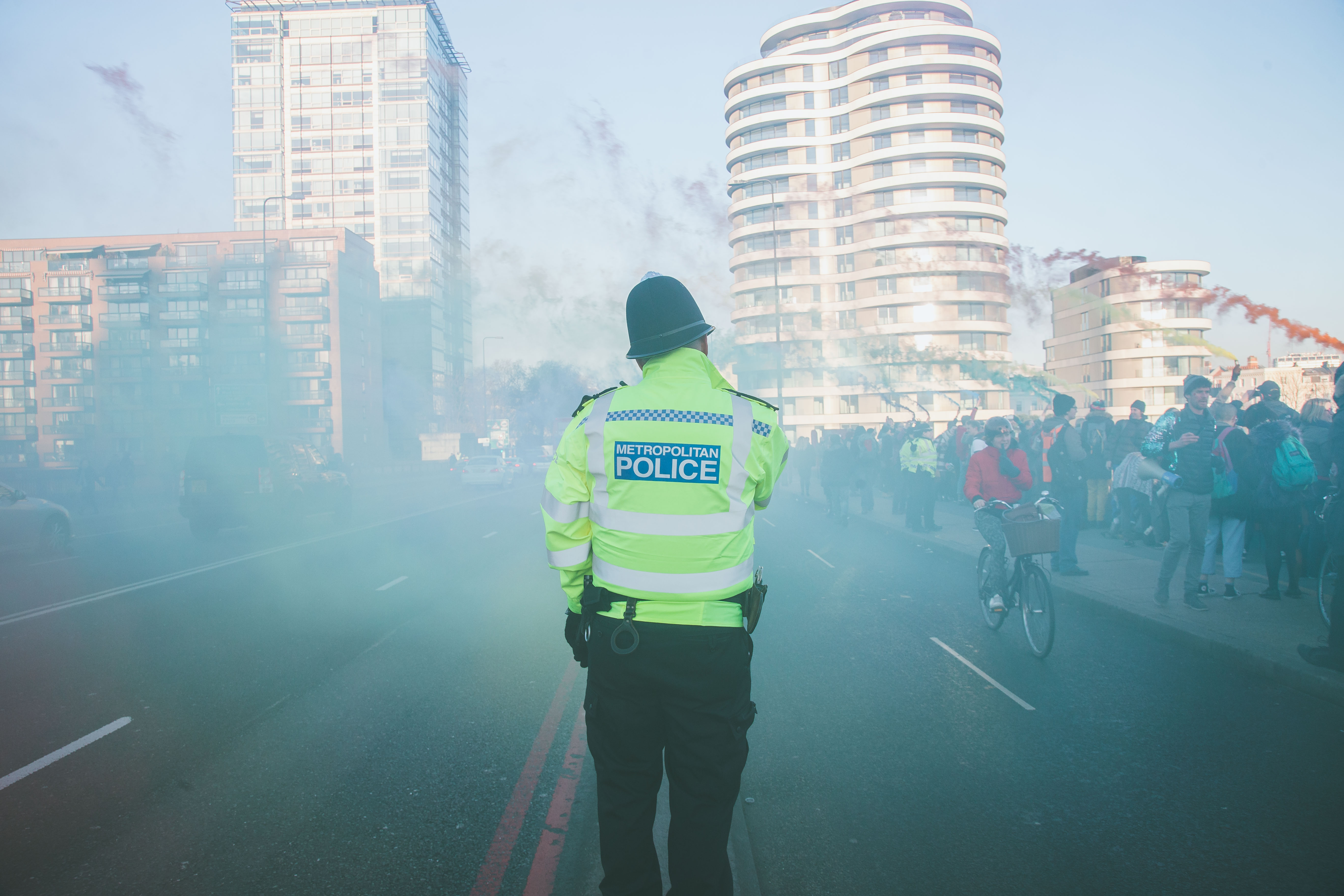 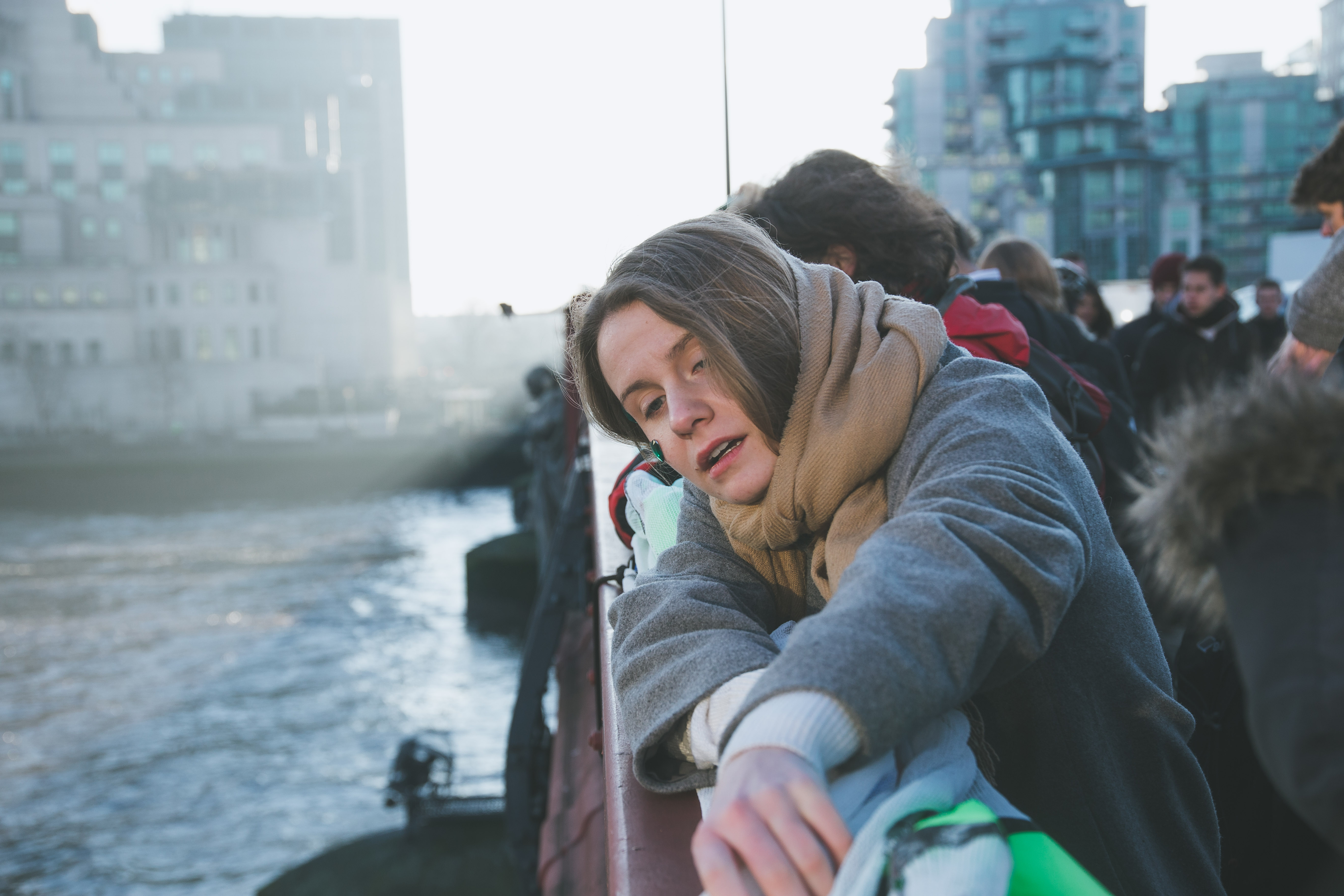 Over the following months, plans formed for #BridgesNotWalls, an action coordinated across London and beyond to mark resistance to the incoming presidency. In the end it was decided that banner drops across bridges were the answer, the opposite of Trump’s wall-building mantra, these campaigners keen to highlight that unity and solidarity is needed more than venomous hatred. Meetings were held on a weekly basis, early morning craft sessions saw hundreds get involved, and this morning it’s finally come together.

It’s about 8:30am when the call comes out for the banners to be unfurled on Vauxhall Bridge. This one has been co-ordinated by LGBT groups across the capital, the vast banners reading “Queer Solidarity Smashes Borders”, swinging proudly as commuters shuffle pass. 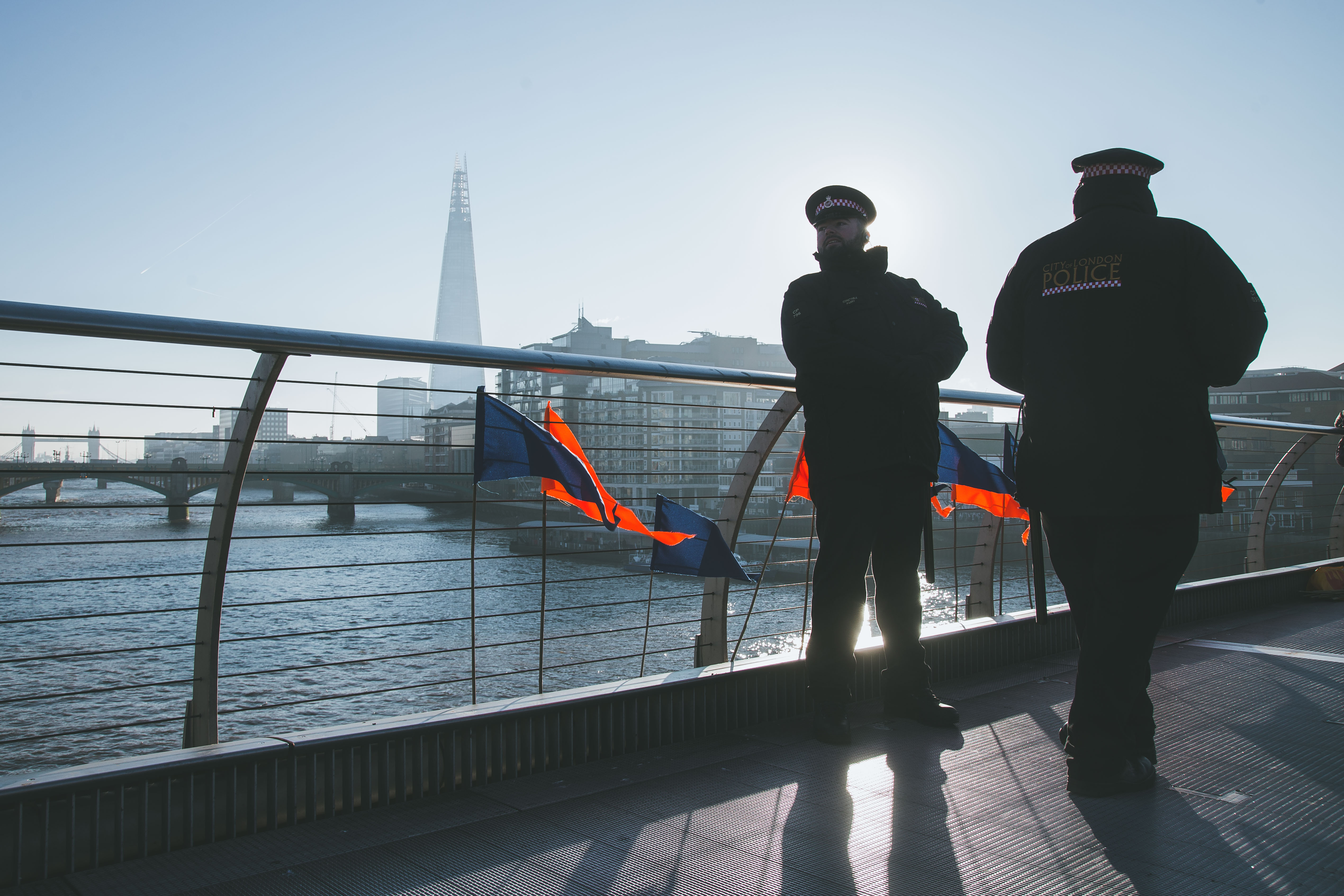 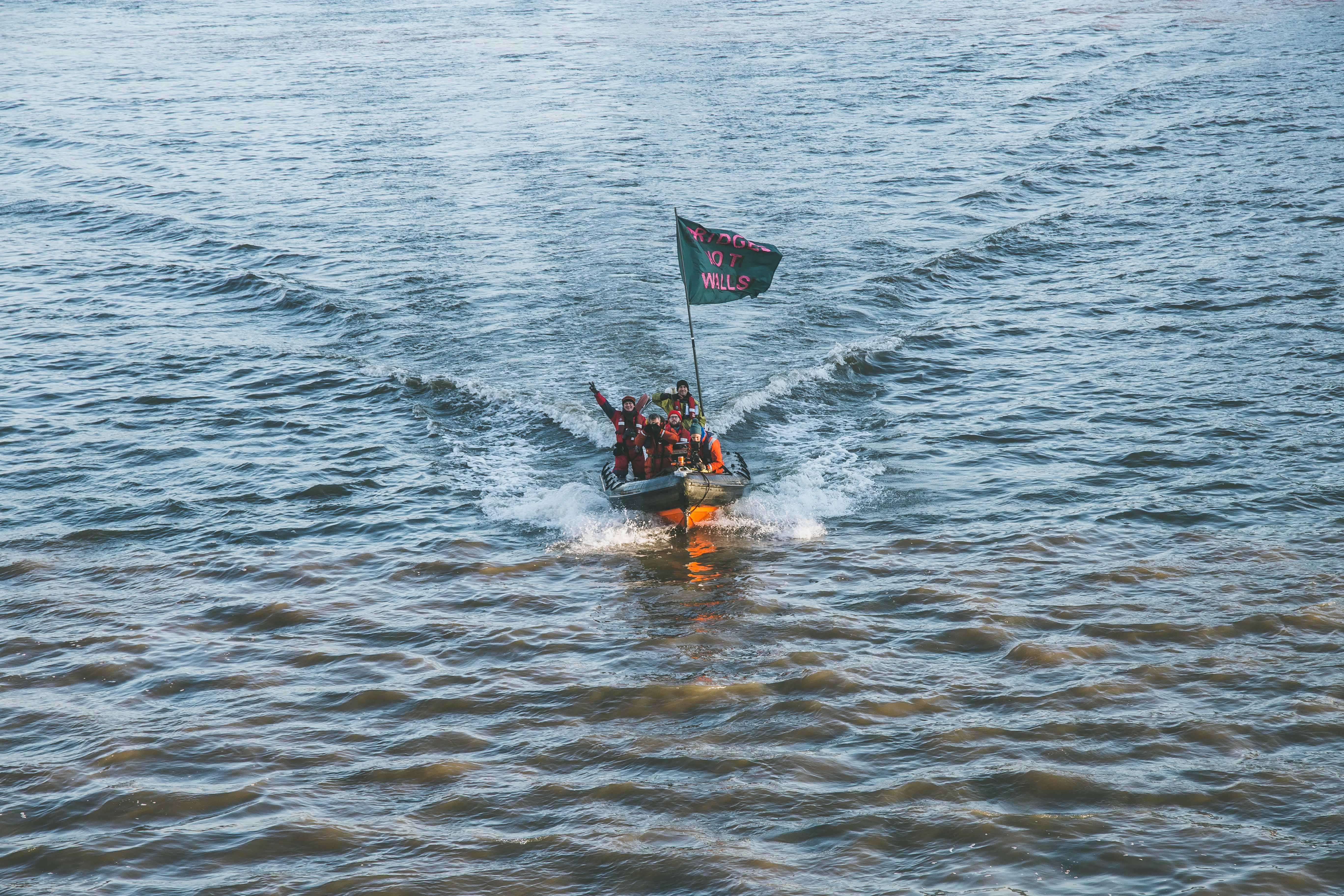 Between Tower Bridge on the other side of the city and where we’re all gathered, different messages and campaign groups have ventured out into the cold. There’s an anti-racism bridge, an anti-Islamophobia one too, one’s focussed on the environment and another making a stand against sexism, and these are just the ones that I can see.

“We’re here to show solidarity with all LGBT people in the USA who are at risk of being further marginalised”, says Harry Jefferson-Perry, a member of Lesbians and Gays Support  the Migrants, one of the groups who’ve helped organise the day. “We’re going to see many having their rights taken away in the light of Trump, but this also an act of defiance in the face of the rise of the far right that we’ve seen in the UK, USA, Europe, everywhere really at the moment.” 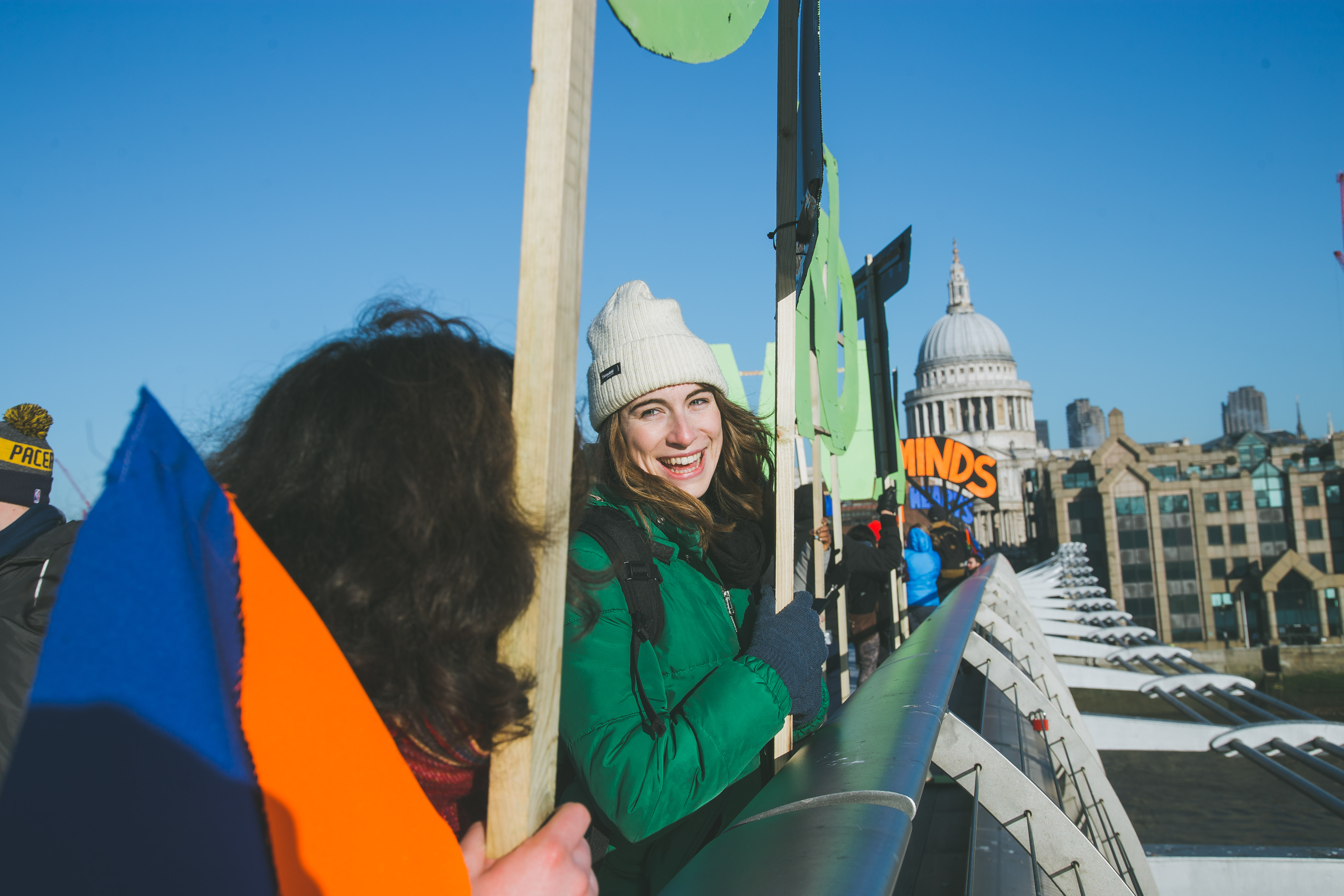 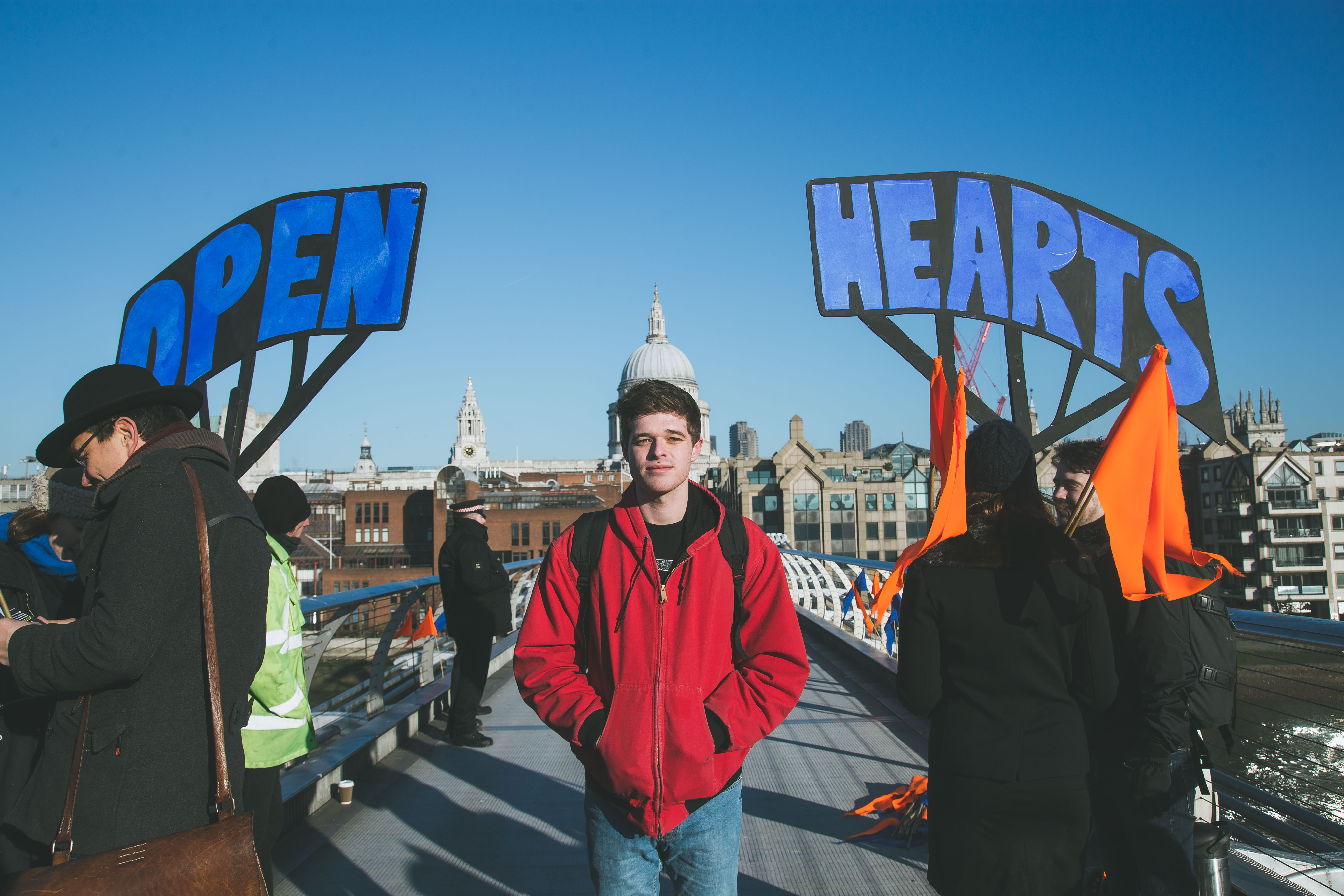 As we stand talking, a small boat speeds along underneath us, filming each of the bridges from the river below. A rainbow of flares are let off all around me, it’s an image that’ll no doubt reach people despairing all across the globe. “The great thing about Bridges not Walls is that it’s given loads of different campaigning and activist groups the chance to come together with one common goal”, Harry continues, “and I think that from now on we are going to use this network of people to work together to challenge what’s happening and change things.”

It’s a pretty impressive coalition, and with the rise of far-right populism this may well be the only antidote. Activist and campaign groups on both sides of the Atlantic work tirelessly, but often they’re fractured, working solo. In the coming years if this tide is to be countered, it’s this that’s going to have to change. And looking out over London this morning, it’s looking like it might be possible. 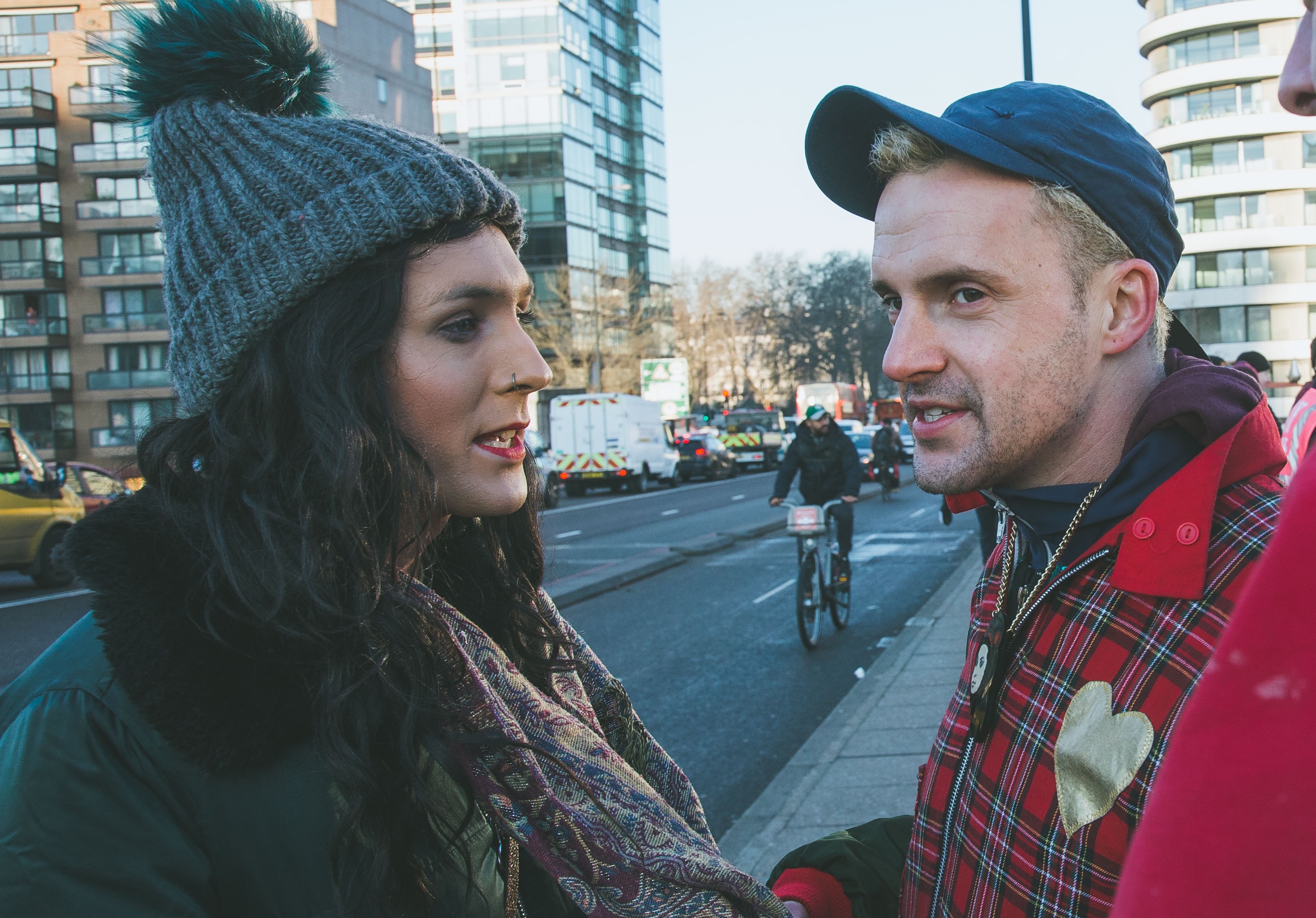 With Beyoncé’s bangers blaring from a set of portable speakers, the crowd starts to make a move to head further East. By the time I make it to the Millennium Bridge, which crosses the River Thames in the shadow of St Pauls Cathedral, flags are waving, massive letters are being held aloft spelling “Bridges Not Walls” for passers by to salute, and there’s a jovial atmosphere that I’m not really expecting.

Flags are being presented to tourist walking past, “show you have an open mind”, says one of them, beaming.

I weave my way past the drum-circle and a group of children, and get talking to a Texan woman named Sherese who now lives in the UK capital. I ask her why she’s here.

“Because I’m an American living in London. Because I think that what’s happening in the country that I’m from is really sad, and it really hurts my heart, and there’s nothing that I could do other than vote right… and I did that and that didn’t work so I’m just out here trying to do something else”, she explains. 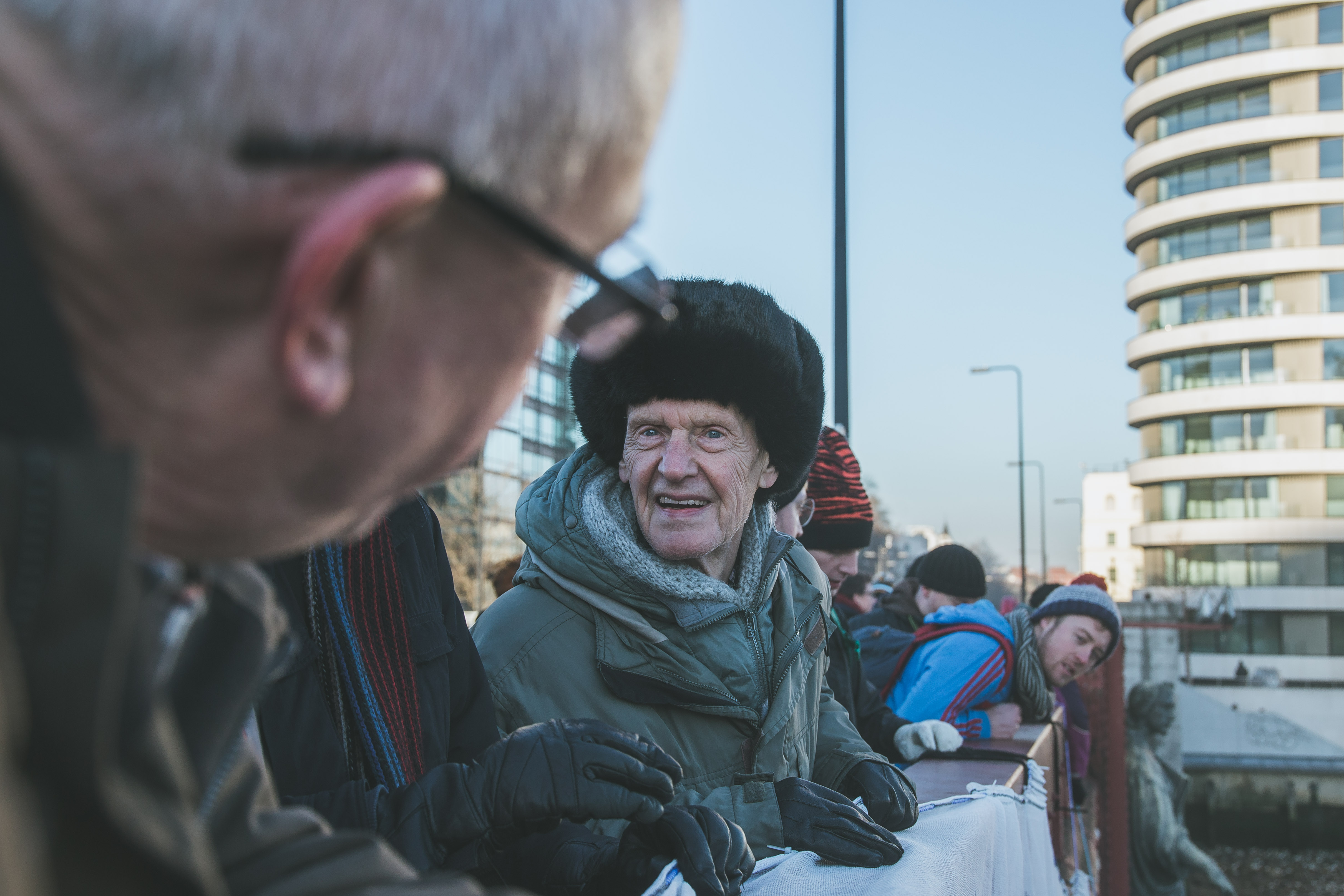 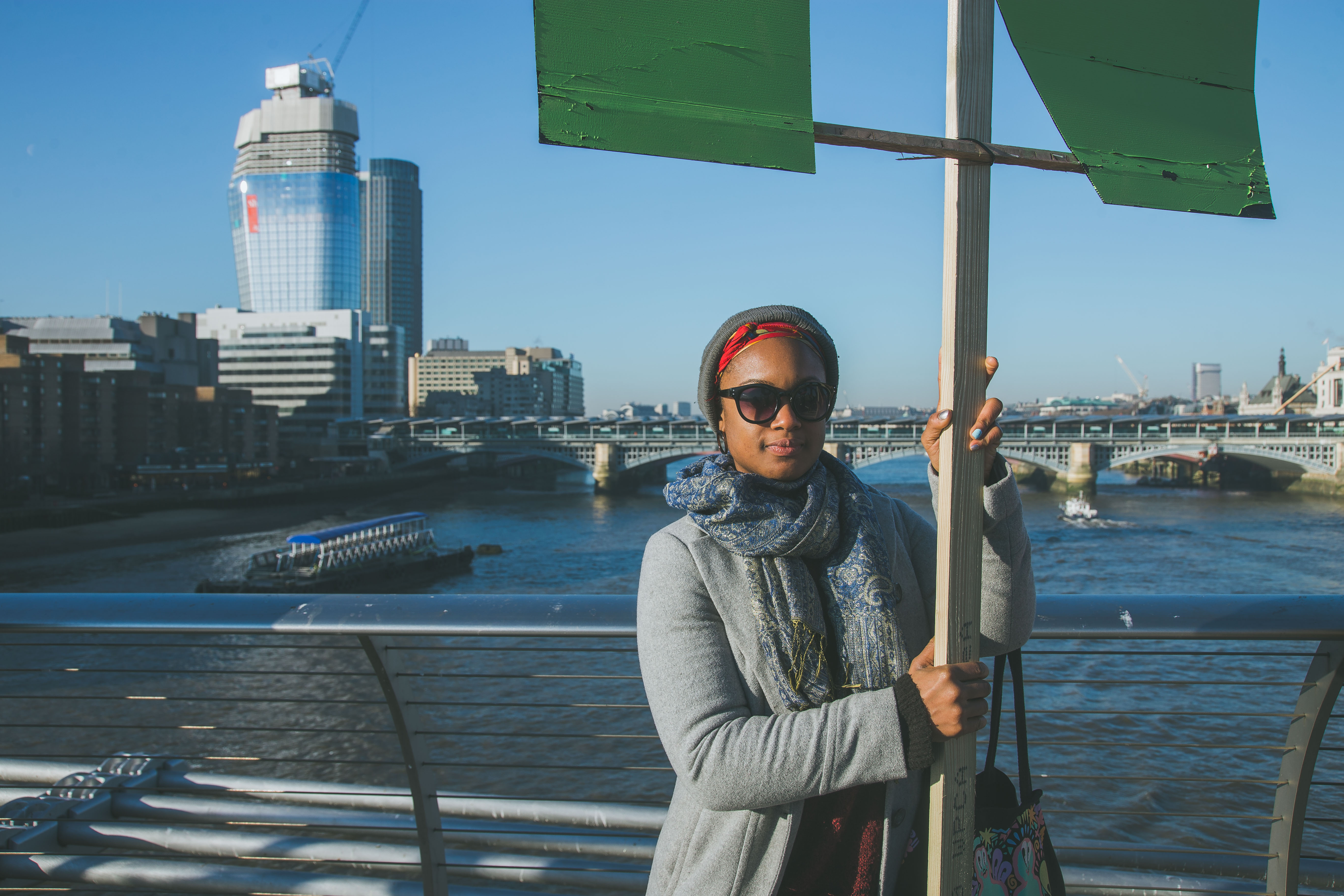 “We’re building bridges not walls”, Sherese continues. “It’s important for everyone to support every nation, every person, every heart. I think that’s basically what this protest and what other protests around London are trying to do, is just to support people. Supporting humanity really.”

By now Dalton is standing just opposite me and he’s smiling, clearly proud of what he and so many others have managed to pull off.

“The whole point of this was to use the bridges as symbols”, Dalton tells me. “As symbols for actually building bridges between people and communities, between organisations who are fighting the same fight against racism and bigotry and sexism. Today is just the beginning.”

Linkedin
RELATED ARTICLES
OTHER ARTICLES
Tristan O’Neill’s shots of dancers caught in moments of reverie at the height of rave’s golden age are a testament to the UK’s legendary club culture.
Theo McInnes’s photos of the annual event provide an intriguing snapshot of contemporary Britain.
Filmmaker Laura Poitras discusses her new documentary which traces the remarkable life of the artist-activist and the impact of her battle against the US opioid crisis.
Since 2007, Gideon Mendel has made 20 trips to document floods in 13 countries. The result is an alarming record of what has already been lost to the climate emergency.
After blocking the Scottish government’s gender recognition reform bill, Westminster is now devising further changes to the law to make it harder for trans people to self-identify.
The action took place in response to the 200 asylum-seeking children who were placed in hotels run by the Home Office who have gone missing.