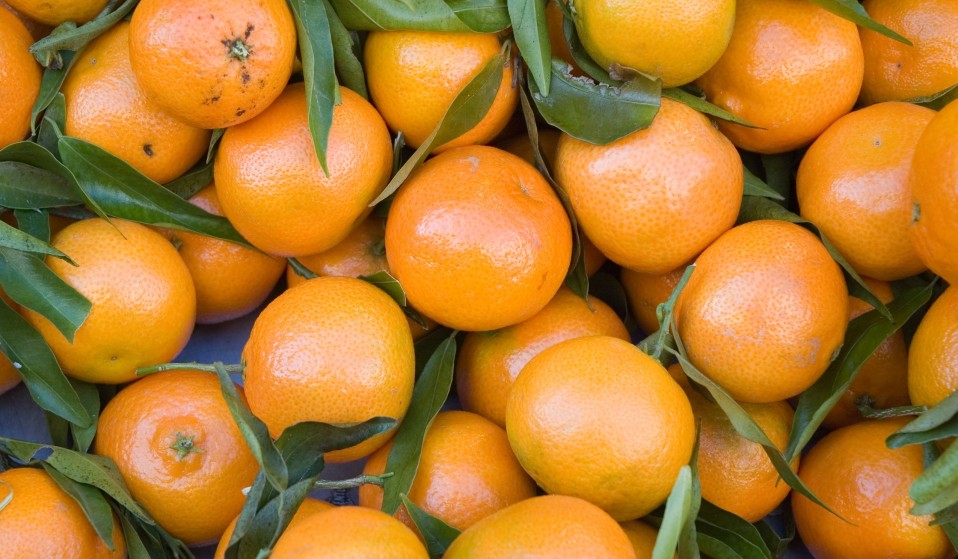 Details have recently emerged of Californian agriculture’s dirty little secret: for the last twenty years, oil companies have been selling their wastewater to farmers, used to water crops for some of America’s best known food brands.

Details have recently emerged of Californian agriculture’s dirty little secret: for the last twenty years, oil companies have been selling their wastewater to farmers, used to water crops for some of America’s best known food brands.

Outside a group of demonstrators have gathered – some dressed as enthusiastic tangerines – and are flagging down bag-ridden shoppers with a simple message: keep oil-field wastewater out of our food. Throughout 2016 they’ve been engaged in a campaign to reveal that beneath the saccharine skin of the Californian food industry there exists a reality altogether more sour.

“It’s just one more straw on the camel’s back”, says Walker Foley of campaigning organisation Food and Water Watch, who are leading a state-wide day of action across eleven locations similar to the one I’m witnessing in Santa Monica. “Who within state legislature is going to have the courage to stand up to this?”

Foley is referring to the recently uncovered business by which major oil companies, including Chevron and the Californian Resources Corporation, capitalise on the waste produced by their local oil-drilling processes. That waste is, overwhelmingly, water. With nearly twenty percent of Chevron’s local drilling taking place on top of fresh water zones, the corporation sometimes extracts more than ten times as much water as it does oil; 760,000 barrels of water a day in the Kern River oil field, for instance.

For the last twenty years Chevron has sold this water at a heavily discounted rate to drought-battling farmers in the Cawelo Water District, a 45,000 acre area of farmland in southern California. Diluted with fresh water, this mixture is used on crops that grow into the Halos, Cuties and Bee Sweet Citruses cheekily lining fruit bowls in millions of American homes.

The catch in all this? You can bet your last Cutie that this ain’t just H2O. Current testing of the contents of oil waste-water is chillingly inadequate. A practice so shady that its gone unseen for two decades has meant that regulation has been happily left to the Cawelo Water District and, err, Chevron. “There’s something to be said about trusting an oil company to regulate itself”, Foley tells me while handing out bagels to his fellow campaigners. No prizes for guessing what that ‘something’ is.

Chevron’s sophisticated regulation involves turning oil waste into ‘processed water’ by running it through walnut husks, (yeah, me neither). As for the Cawelo Water District, its own testing follows outdated protocols that can only detect naturally occurring elements like salts and arsenic. It doesn’t bother with tests for carcinogenic and toxic chemicals used in modern extreme oil extraction techniques, like steam injection, fracking or acidisation. 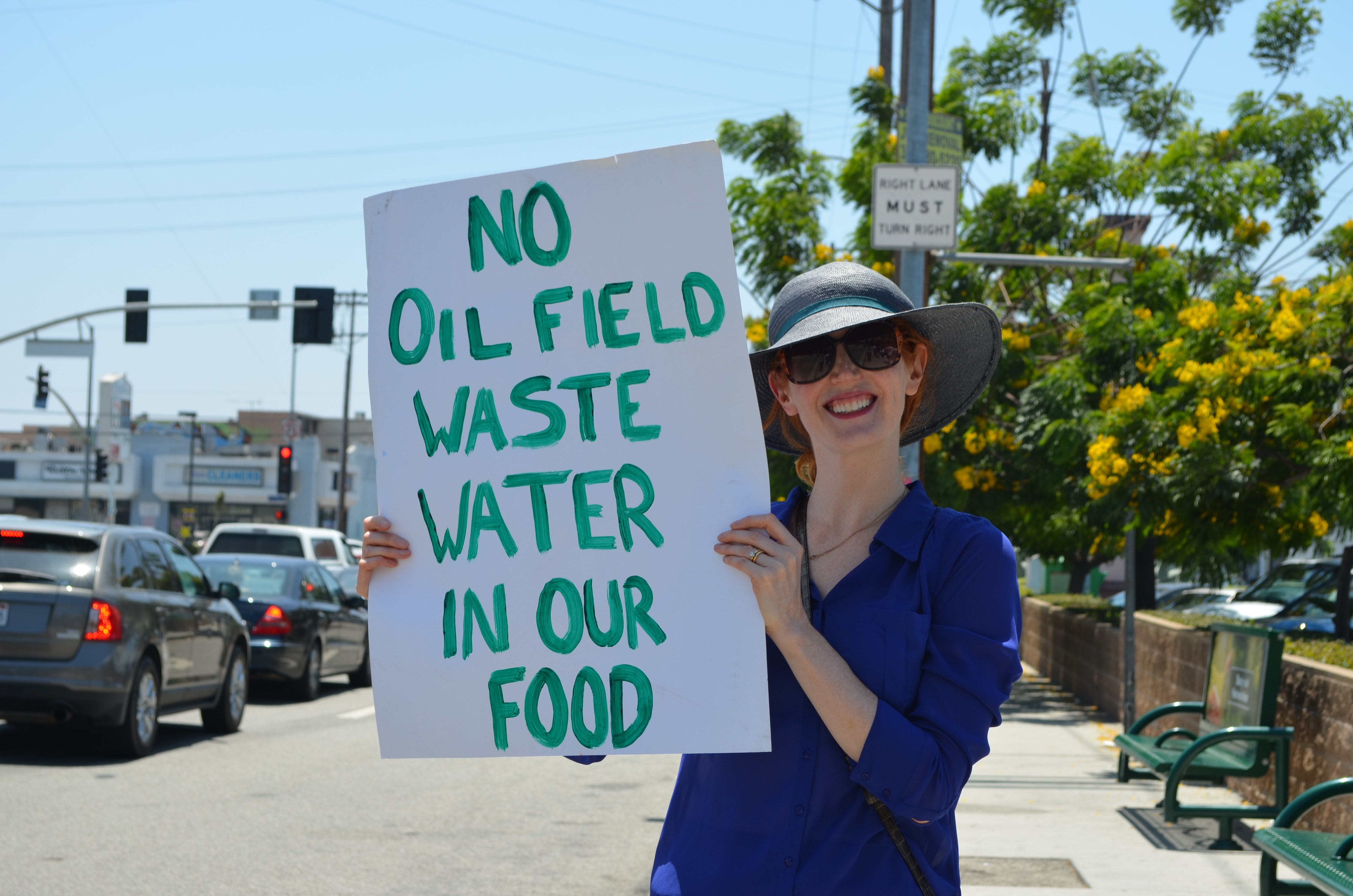 Incredibly, current Californian state law says that this is all gravy. Companies are neither required to test oil wastewater nor make that information public. Heightening the sense of parody, some food products relying upon wastewater still carry the ‘organic’ tag because there is no organic standard for irrigation water. “California regulators and lawmakers are asleep at the wheel”, Foley says. “We’re tired of waiting for them and the Governor to do their jobs. What we have is the total collusion and corruption of our government agencies who are not holding these industries to any kind of rigorous scrutiny.”

California occupies a vital position in America’s food chain. Two thirds of the nation’s food is produced by the state. Still further amounts find their way to supermarkets overseas. Maintenance of these huge production quantities relies upon an unfathomably water-intensive agricultural system, in a sun-scorched land that endures permanent drought worsened by climate change.

And that’s the bitter irony exposed by the wastewater campaign. It’s corporations like Chevron, largely responsible in the first instance for the worsening drought, who profit by selling bizarre, potentially poisonous solutions for solving that drought. This amounts to a well-oiled, lucrative one-two punch inflicted upon California’s inhabitants. In the eyes of Food and Water Watch, it’s a race to the bottom that has just stepped up a gear. Since January the North Kern Water District has joined Cawelo in adopting the practice, while still more are interested in it.

If the presence of fossil fuel excrement at our dinner tables seems like a shocking new nadir, an afternoon spent with Foley makes you question why we should feel surprised at all. The assumption, even the expectation of corporate wrongdoing for the sake of profit, is perhaps the most distressing thing. It influences the shoppers who disinterestedly turn away from the campaigners to go and buy more fruit.

“There are just so many implications for the global systemic nature of what this industry does”, Foley says, with a weariness matched by the now-sunburnt tangerines still doggedly giving out fliers. “If we want to adhere to the standards that our leaders set in Paris, there are so many things that we need to do, one of them being to stop feeding our children crap grown with oil wastewater. It’s 2016. This industry has got to go.”

Linkedin
RELATED ARTICLES
OTHER ARTICLES
After blocking the Scottish government’s gender recognition reform bill, Westminster is now devising further changes to the law to make it harder for trans people to self-identify.
Campaigners reflect on what the supreme court’s decision to allow buffer zones in NI means for the future of reproductive rights in the UK.
Photographer Sean Maung reflects on documenting a small town in Pennsylvania afflicted by high levels of unemployment, poverty, violence, crime, and addiction.
Jeffrey Henson Scales intimate portraits and protest images of the BPP and its leaders offer a rare insight into organisation at a time of societal upheaval.
After a two-year hiatus and a new album, the Nigerian artist is riding high. Now, he wants to bring his alternative, genre-bending sound to the world.
Zsófia Sivák’s ongoing project documents the country’s tavern culture, preserving a once defining part of rural life.