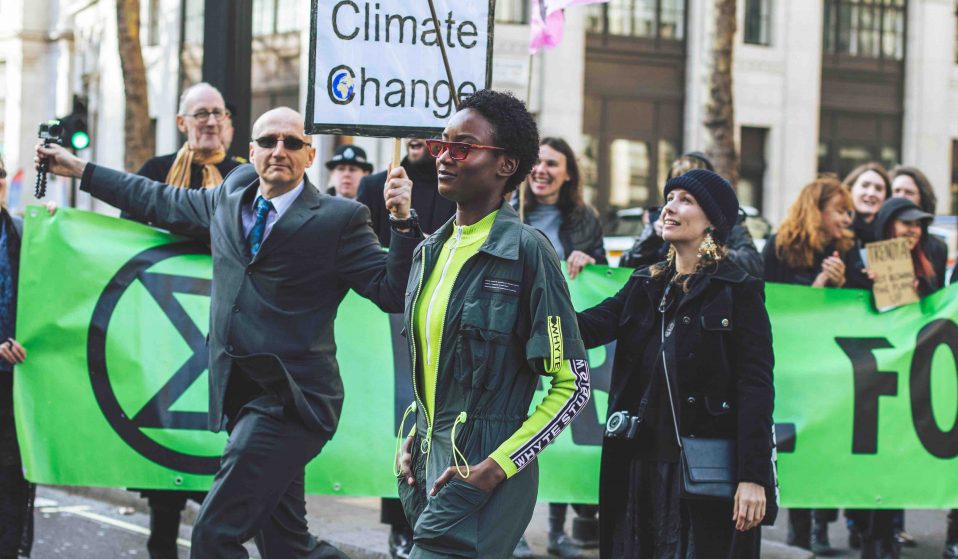 This weekend, Extinction Rebellion blocked the roads around London’s Fashion Week venues in a bid to ‘disrupt business as usual.’

This weekend, Extinction Rebellion blocked the roads around London’s Fashion Week venues in a bid to ‘disrupt business as usual.’

A small crowd of climate change activists huddled outside Temple tube station yesterday morning, under a clear, cloudless sky. An unusual sight for London in February, the sun seemed to have invigorated those attending London Fashion Week – including campaign group Extinction Rebellion (XR), who protested outside event venues to “Disrupt Business As Usual.”

As hordes of street photographers ran around to snap the well-heeled Fashion Week attendees, the “rebels” – as some of the activists call themselves – blocked roads near the Strand to pressure the British Fashion Council into declaring a climate emergency.

Clare Farrell, a designer and the co-founder of XR, told Huck: “An industry that’s in the business of inspiring people, in my opinion, should ask itself what its responsibility is in times like this.”

Demonstrators – ranging from students to retired pensioners – cheerfully passed banners and flags around before splitting into groups. “Please dress as though you are going to the most glamorous funeral,” read the Facebook event’s description. Protesters wore black in mourning for the hundreds of species facing extinction, and the human lives affected by climate breakdown. 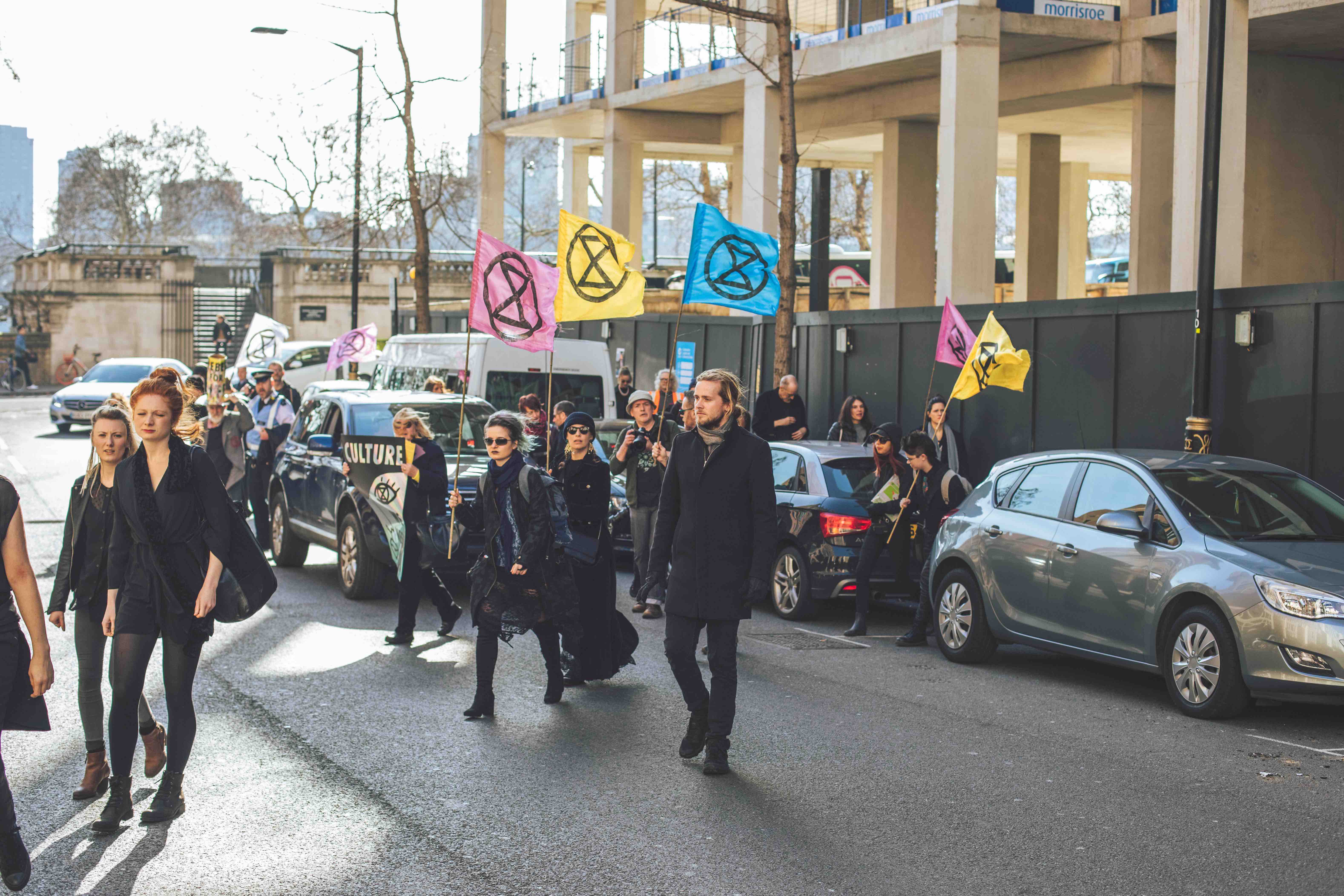 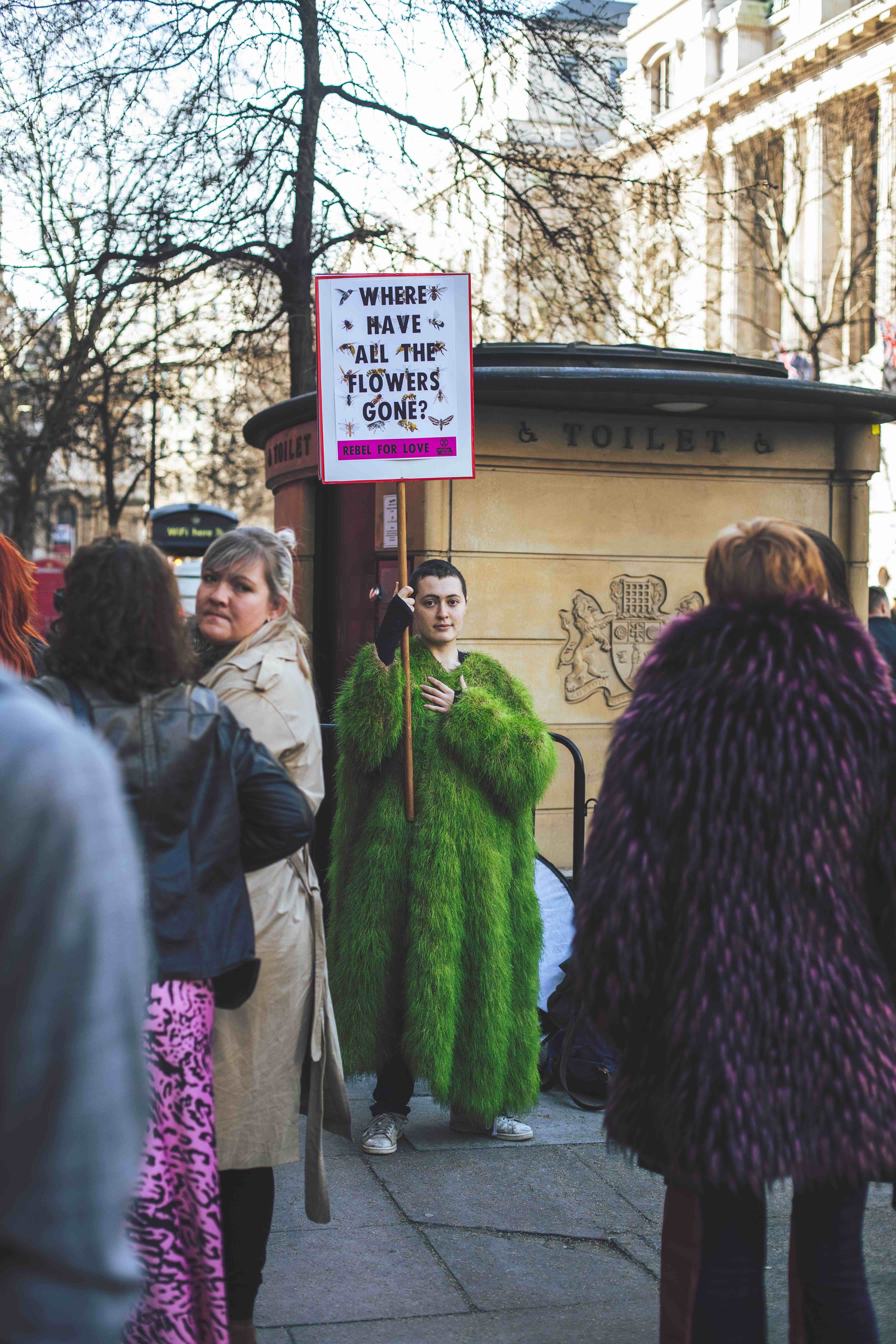 “It’s important to us that we don’t appear to be in a combative relationship with institutions,” Farrell said. She explained that XR, which advocates for non-violent direct action, met with the British Fashion Council on Thursday, February 14 to discuss the industry’s potential “to transform itself to be a cultural and creative force that stops the trend of excessive consumption”.

Amongst those in “glamorous funeral” attire was Andrew, 51. He opted for a blue tie and grey suit. “I’ve been very concerned by climate change for the past 20 years,” he said. “I’ve given up my car, given up meat, having baths, flying… Everything!”

A few cars honked as the protestors stood in the roadblock by the disused Strand station – although demonstrators agreed with police to block roads for seven-minute intervals, so as not to entirely stop the traffic.

For Andrew, eco-activism will only be successful if it gets the support of the general public. “If you go too radical, you’ll put people off,” he said, “so there’s a very thin band between not being noticed and being too noticed.” 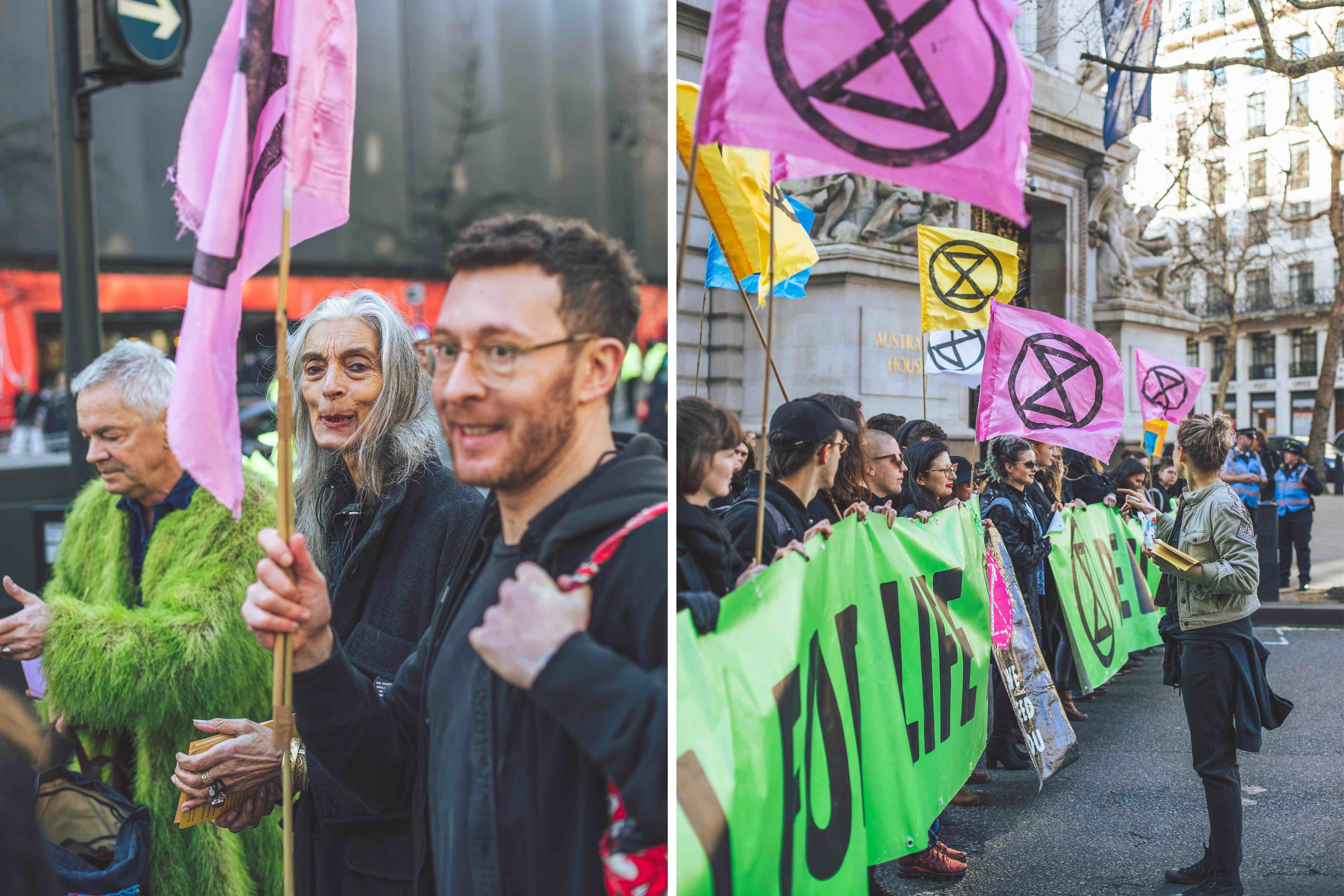 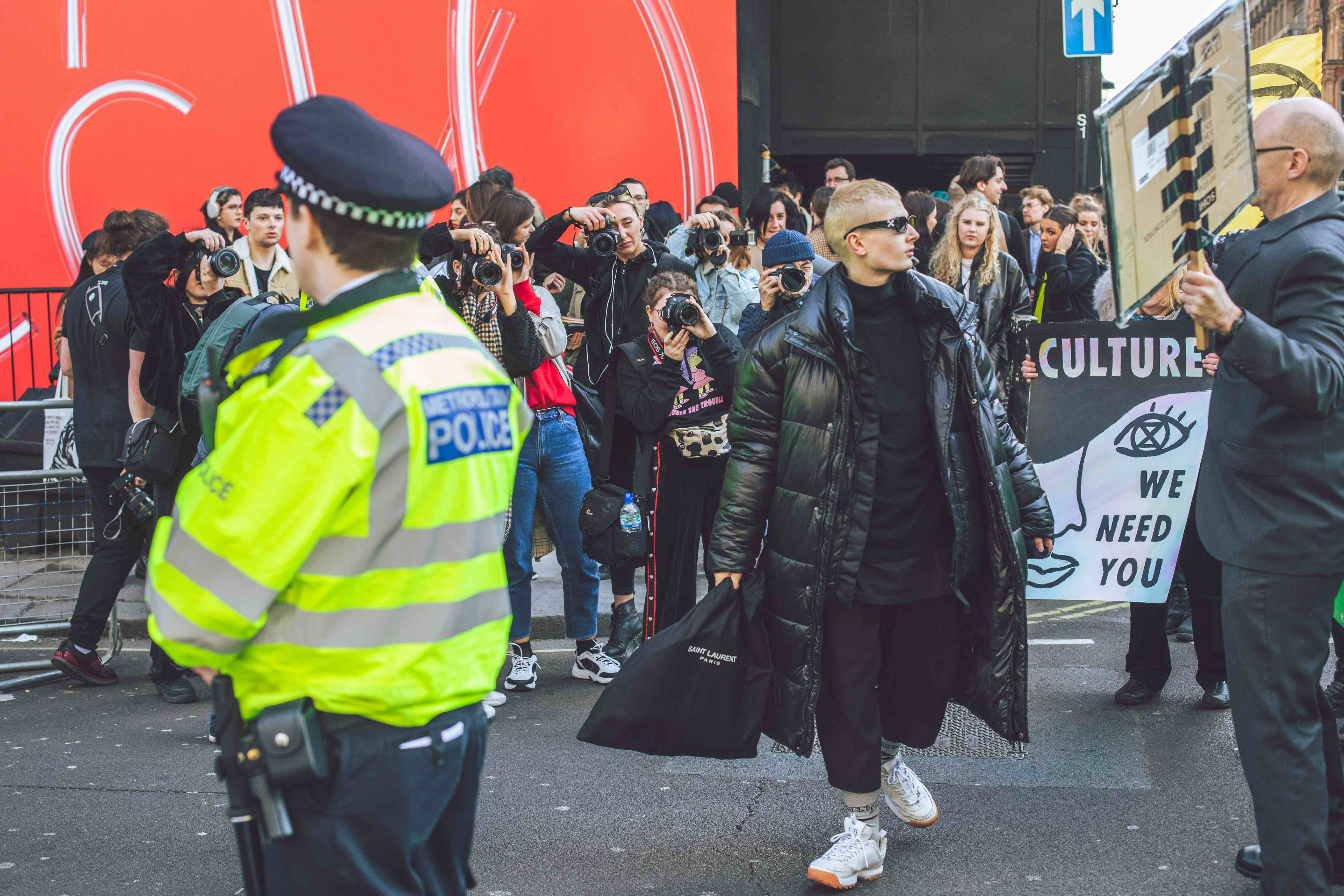 Some fashion show attendees walked nonchalantly past the protesters. When asked for comment, a woman in a fur jacket said dismissively: “we’re just trying to get in,” while the 13-year-old with her shrugged: “I think it’s good.”

Others read the leaflets and a group of models even staged a spontaneous catwalk along XR’s blockade. An activist, who wished to remain anonymous, described XR’s logo, the shape of an hourglass sand timer, as a metaphor for time. “It’s about how time passes very quickly. We have 10 years if we want to stay alive.”

Fellow protestors Heather and Dan, 60, also known as artists Ackroyd & Harvey, did not wear black, choosing instead to don flamboyant green coats. “They’re real living seedling grass coats,” Heather said. “We have grown these beautiful, sensuous grass coats because the beauty of the planet should never ever be ignored, and should never ever be abused.”

Though the need for change seems widely acknowledged across fashion, most of the industry maintains destructive practices – with its constantly refreshing seasons encouraging fast fashion rip-offs and throwaway culture. What is stopping them? “Complacency!” Heather cried. “The expertise is there, the knowledge is there, the research is there. Use it, move it, act now.” 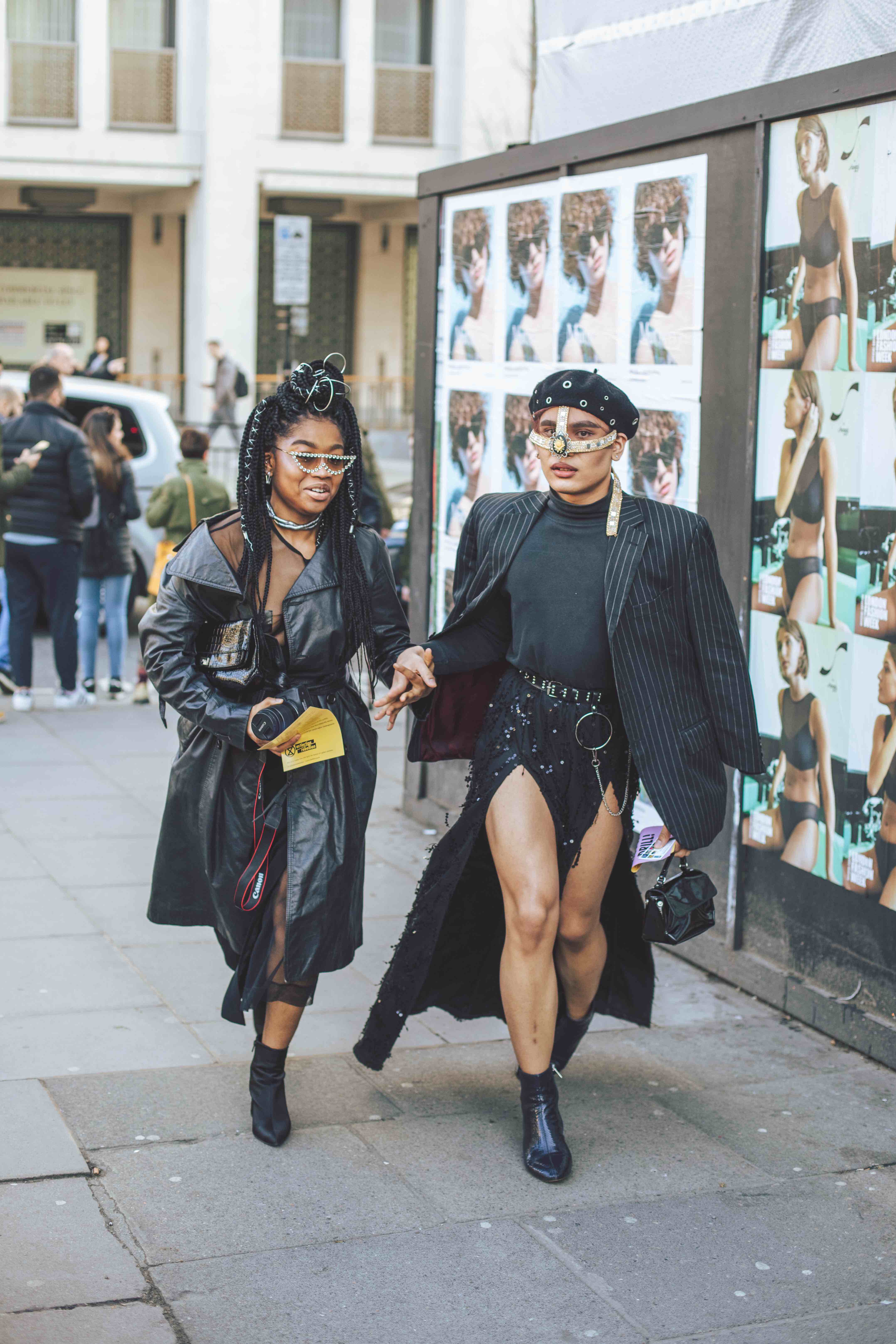 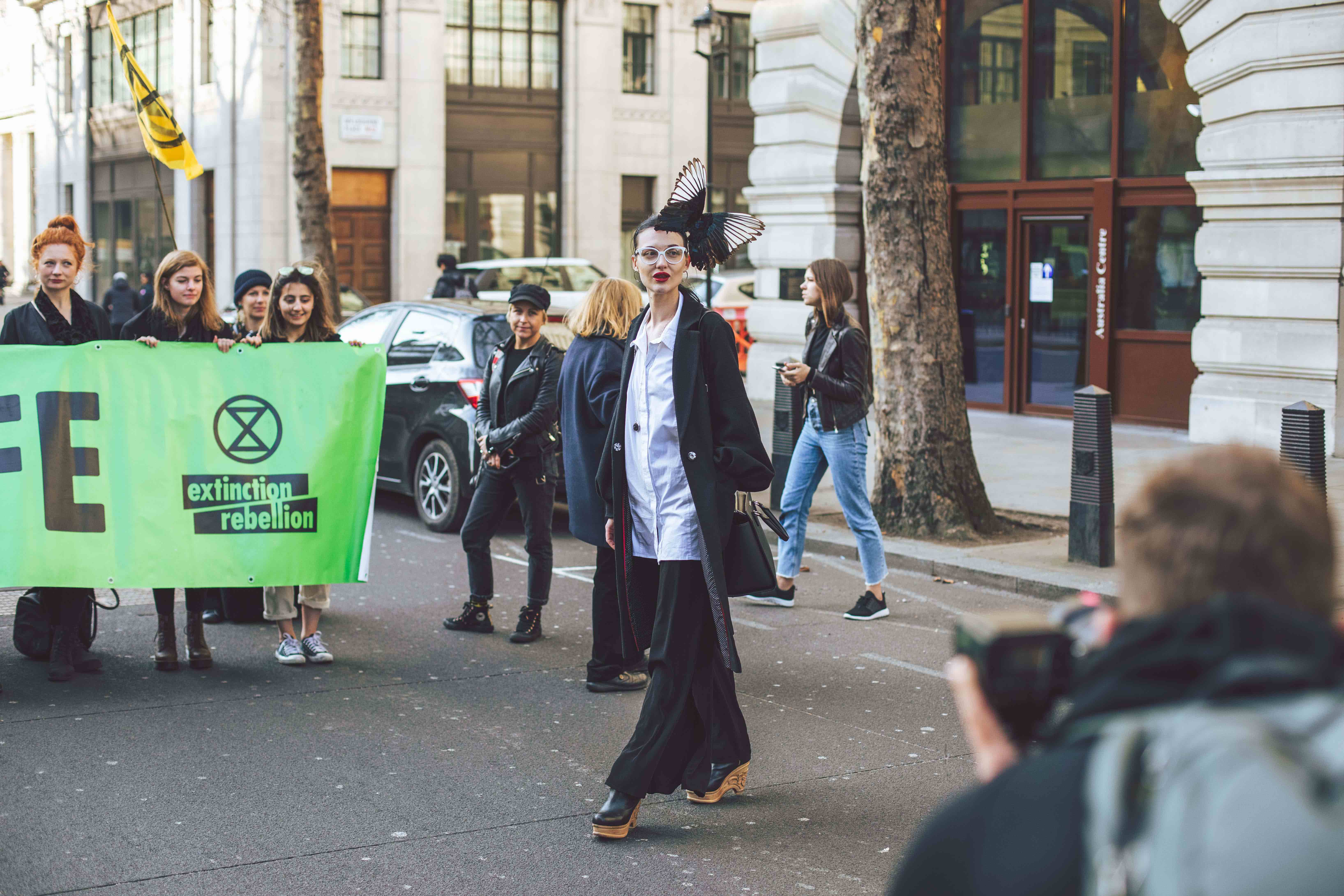 Sharon, a 20-year-old fashion student and first-timer with XR shared similar thoughts. “We are kind of caught up in like a bubble sometimes,” she said of her experience in the field, “and it’s kind of corrupt in some ways.”

“Nowadays, technology is so advanced that there are so many ways we could do it,” she went on. “But we don’t do it because money is in our mind… And we are so used to our traditional, money-making ways.”

Pairing a torn jacket with mirrored sunglasses and a black mask, Franck, a menswear designer, watched the protest from the pavement. As the creator of a small streetwear label called Palette, he also sees it as a “money problem”.

“Designers that just begin, they don’t have the technology, so, they’re using the resources that they can use,” he explained. “It definitely comes down to the bigger brands to lead ahead,” his friend Tashan added. “We’re not the big players yet, due to be,” the young creator said, “when that day comes, we gonna change stuff.”

For XR’s Clare Farrell, asking the fashion industry to “clean itself up” is not the most relevant question. “We need to get that elephant out in the room and say: Ok, people need to consume less. And that’s not an easy conversation.” 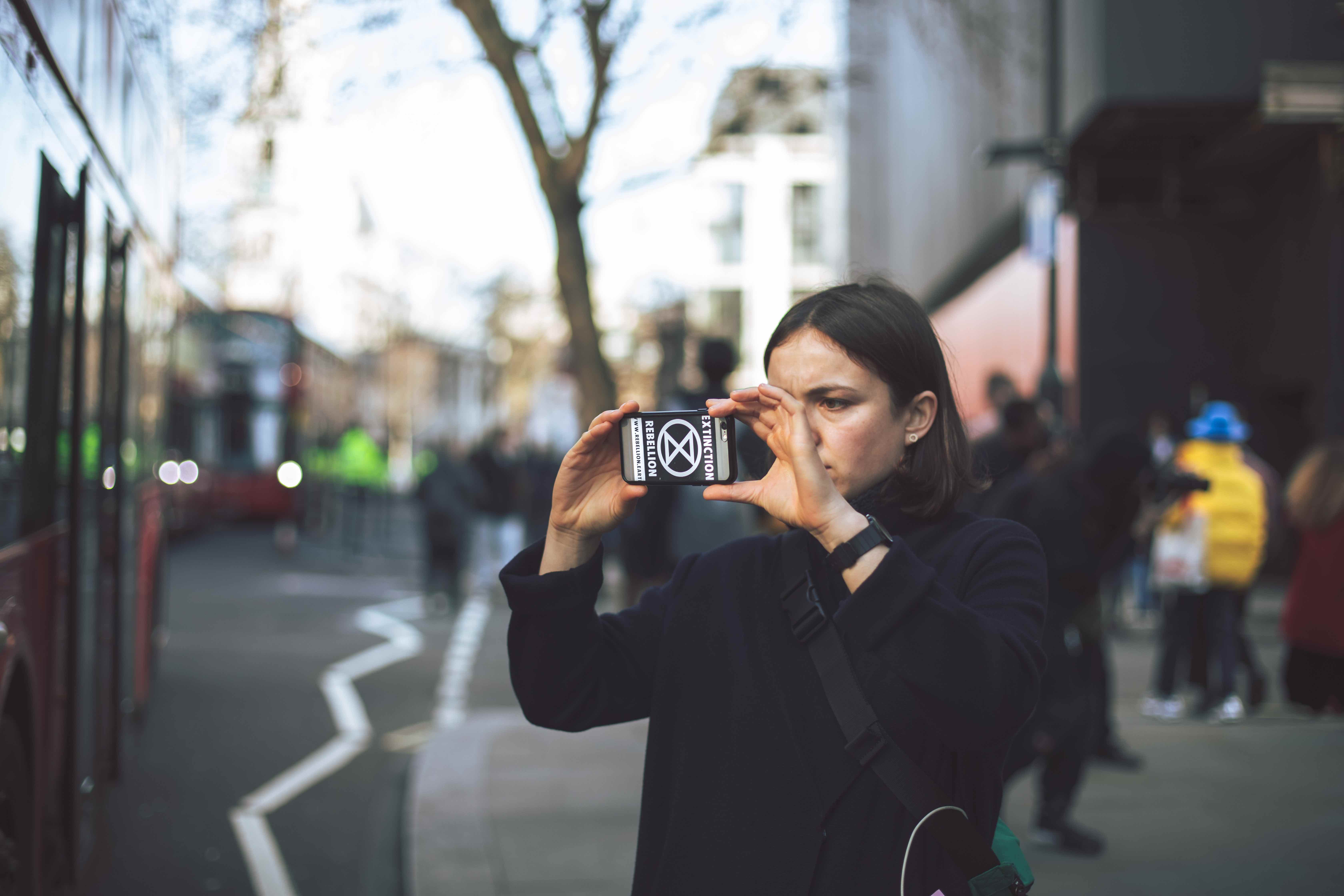 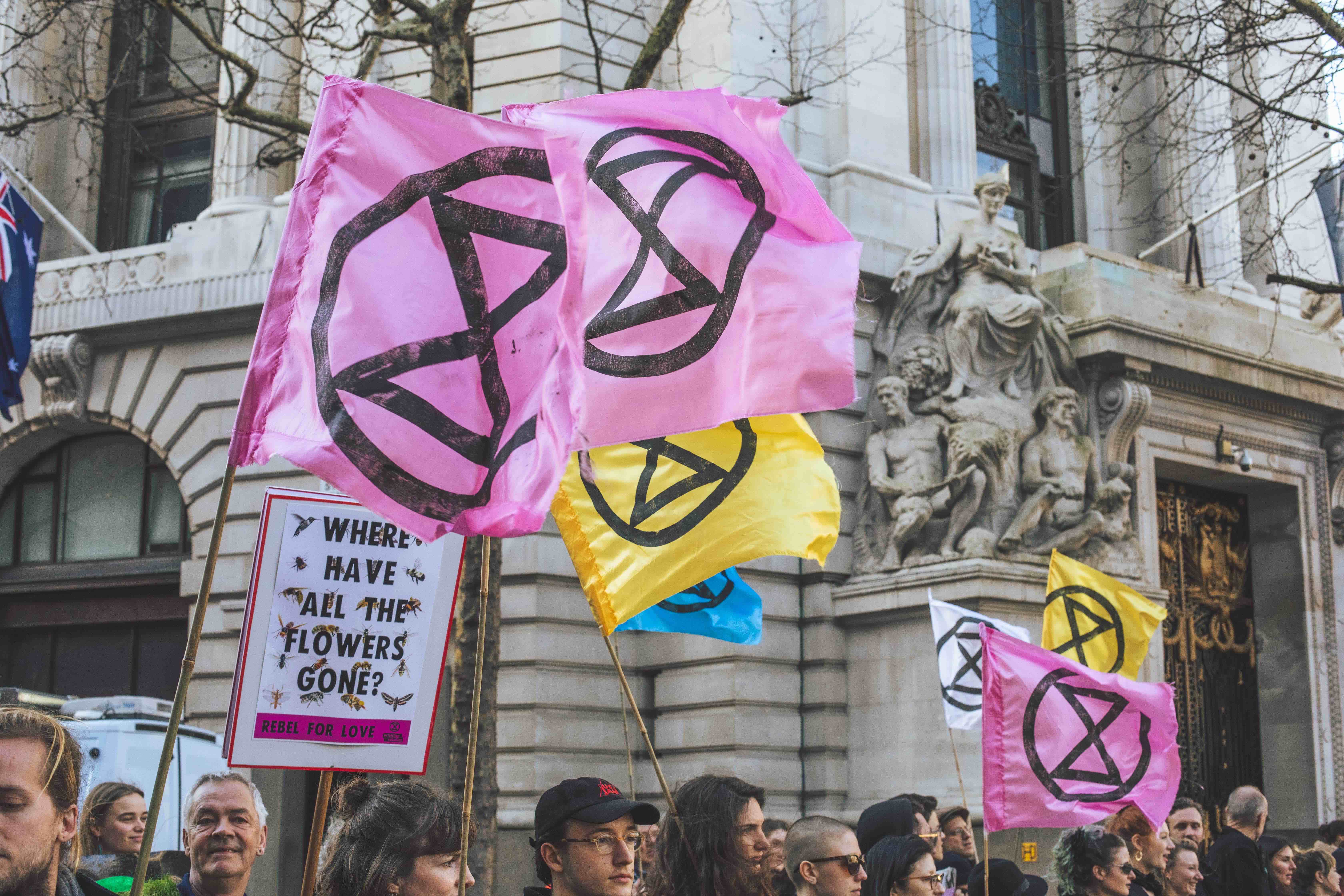 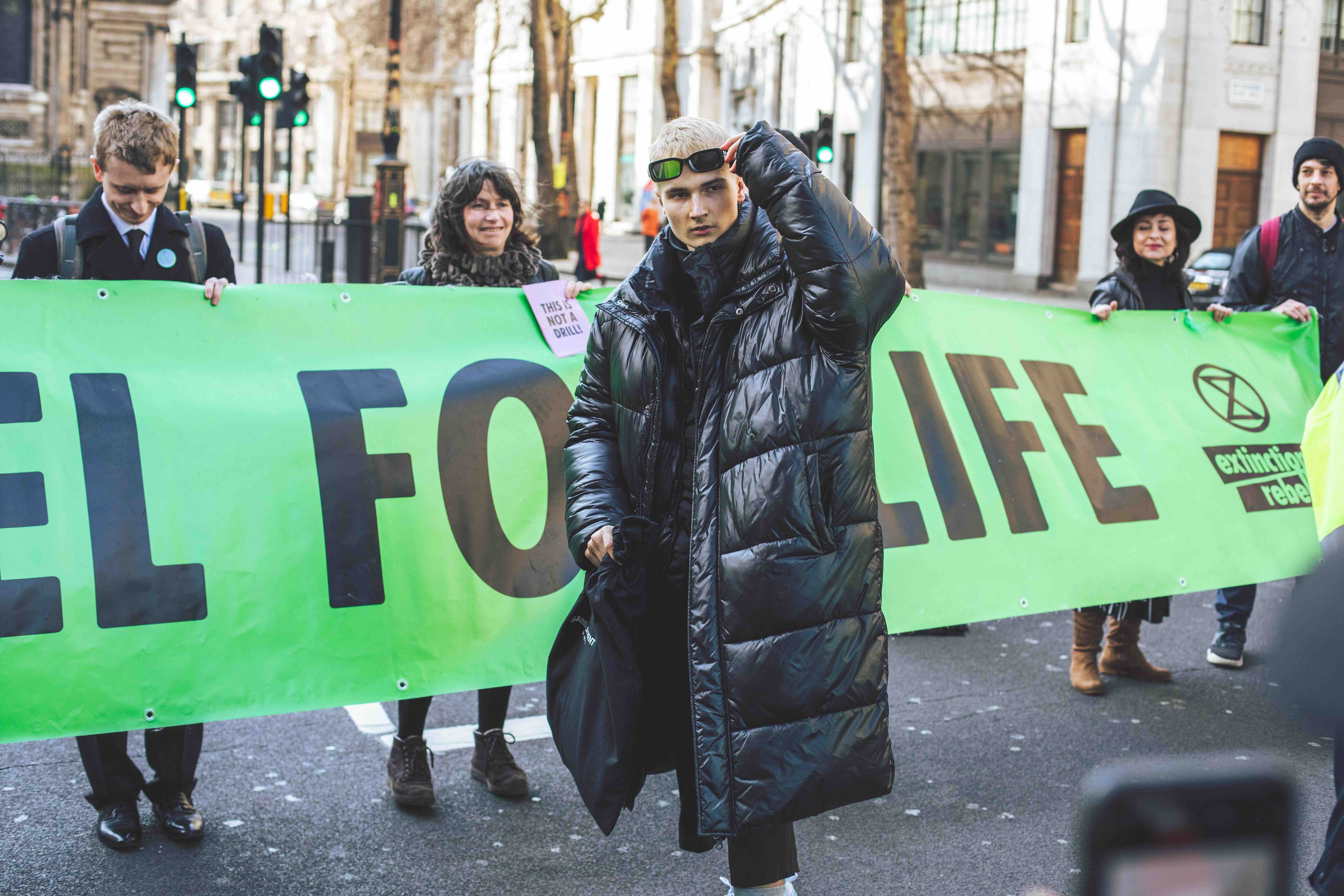 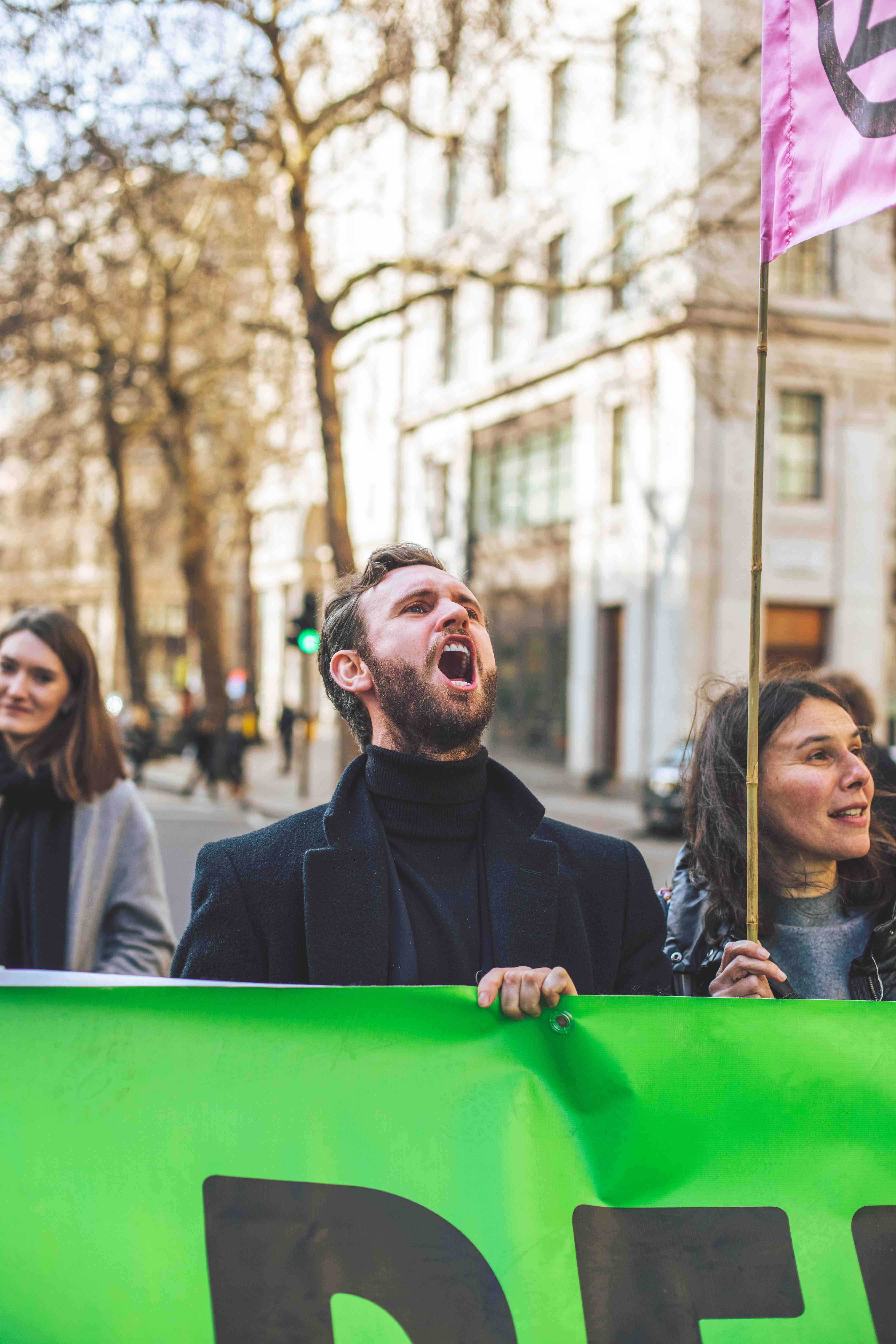 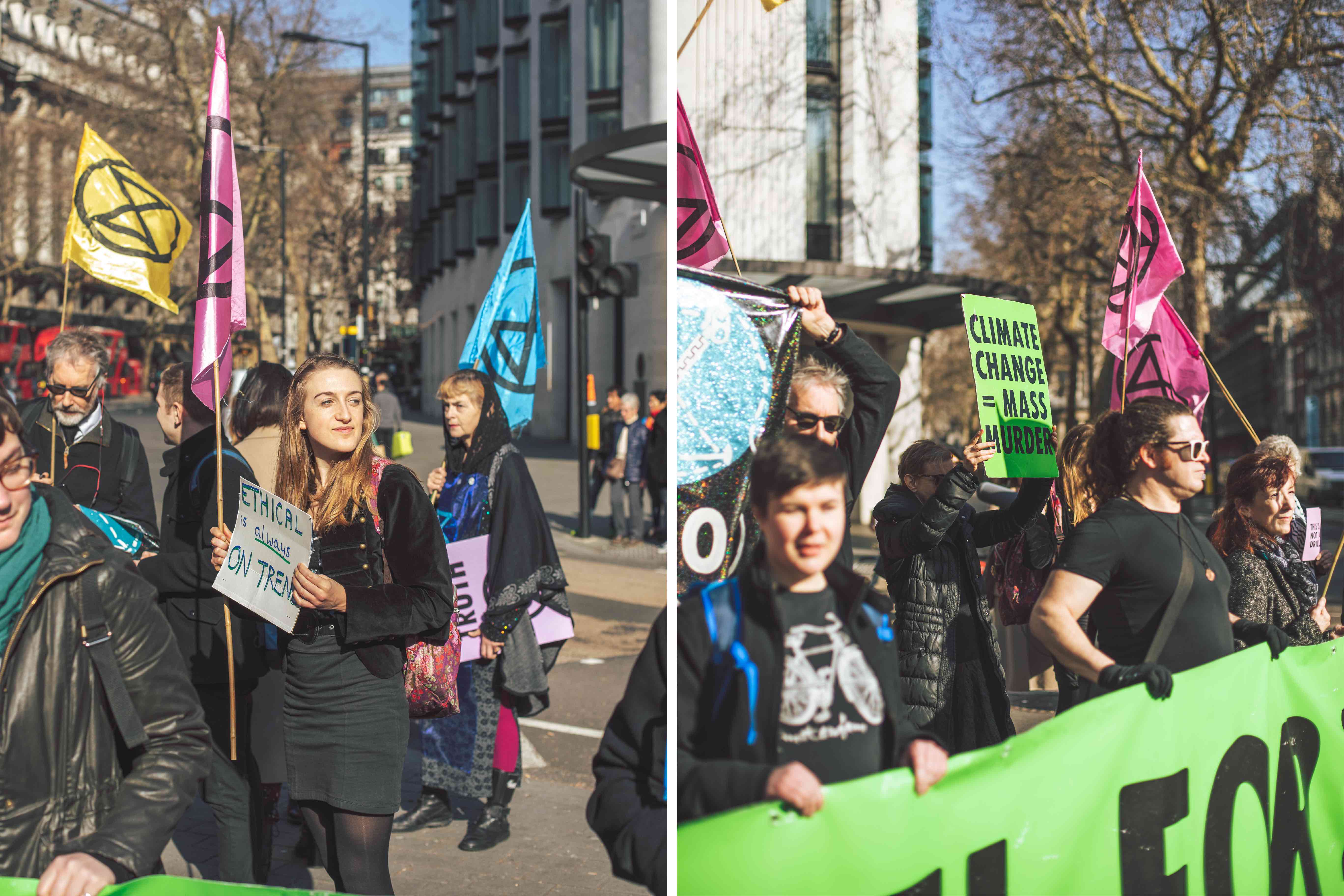 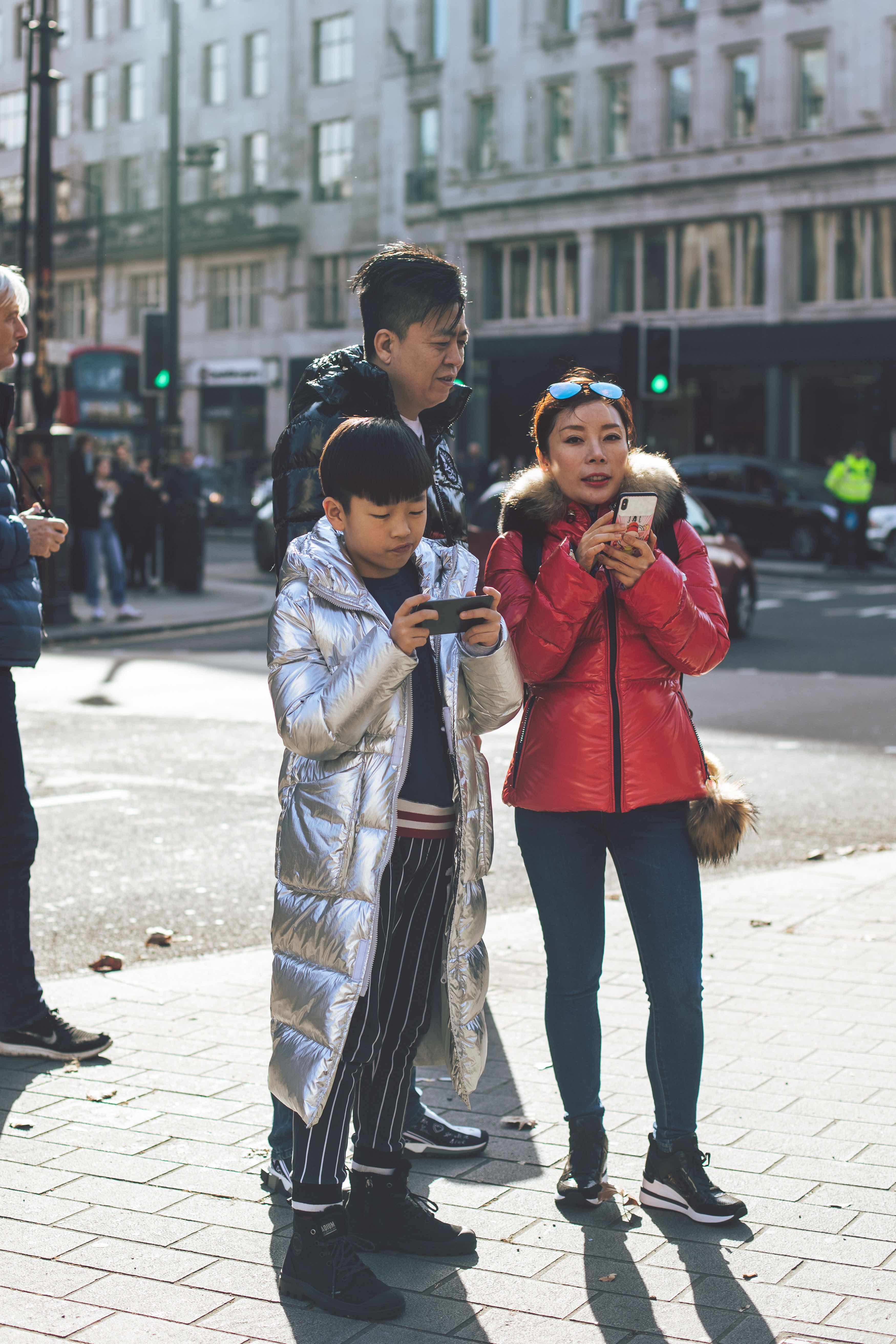 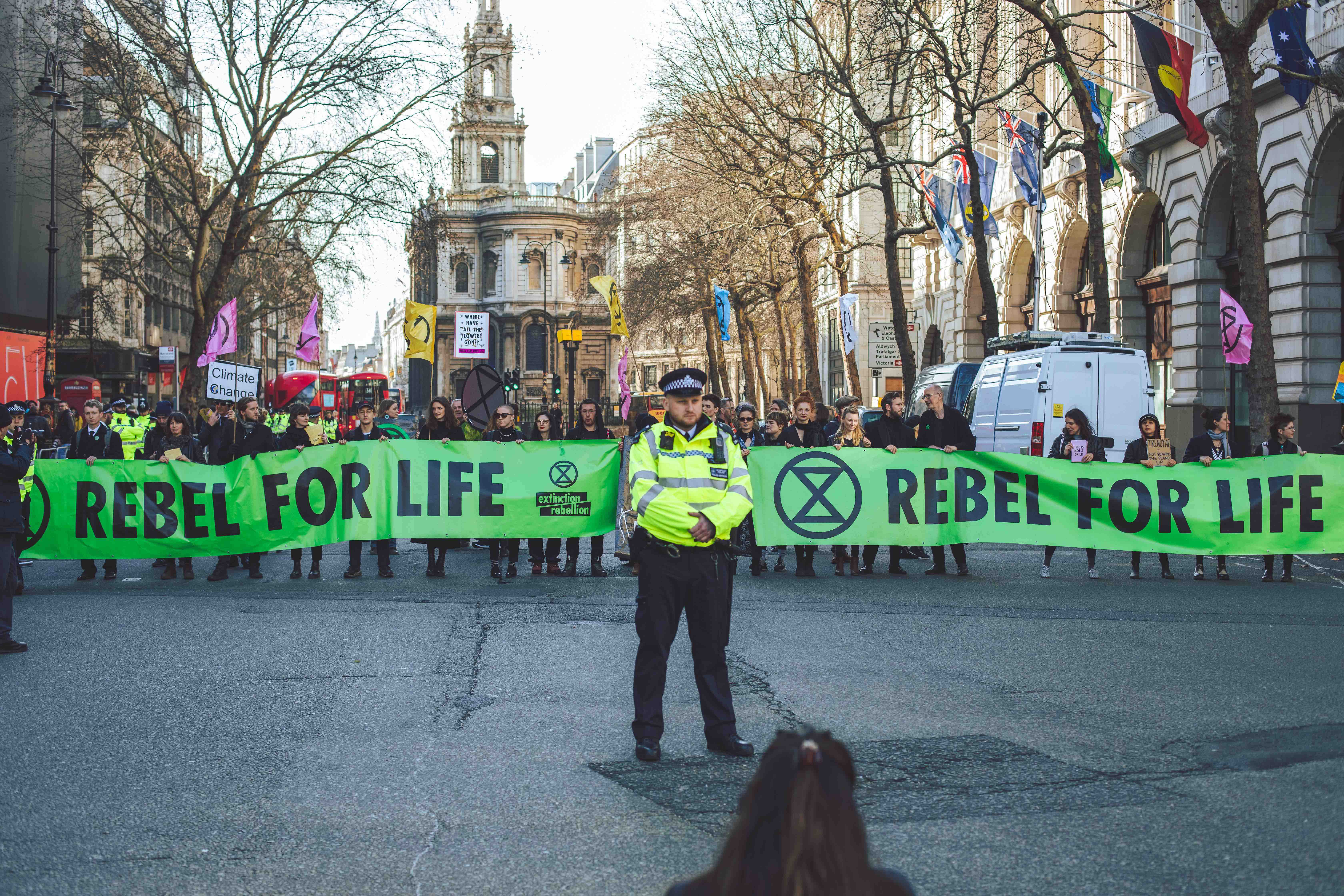 Linkedin
RELATED ARTICLES
OTHER ARTICLES
In Glasgow, life expectancy is reduced by 15 per cent. In a new project, photographer Kirsty Mackay reflects on the lives cut short.
In Sheffield, food delivery drivers are fighting back against one of the giants of the gig economy.
Leading art critic Robert Storr reflects on the photographers – from Seydou Keïta, to Malick Sidibé, to Carrie Mae Weems – who helped to transform and redefine the medium.
Welcome to the Death Well: a gravity-defying display of fearlessness that reimagines what’s possible on a two-wheeled machine.
During the pandemic, Made In Hackney launched a meal service that has since proved vital for many, made up of vegan dishes that reflect the borough‘s cultural diversity.
Ahead of the policing bill reaching its final stages in the Lords, protestors came together to rally against the legislation.