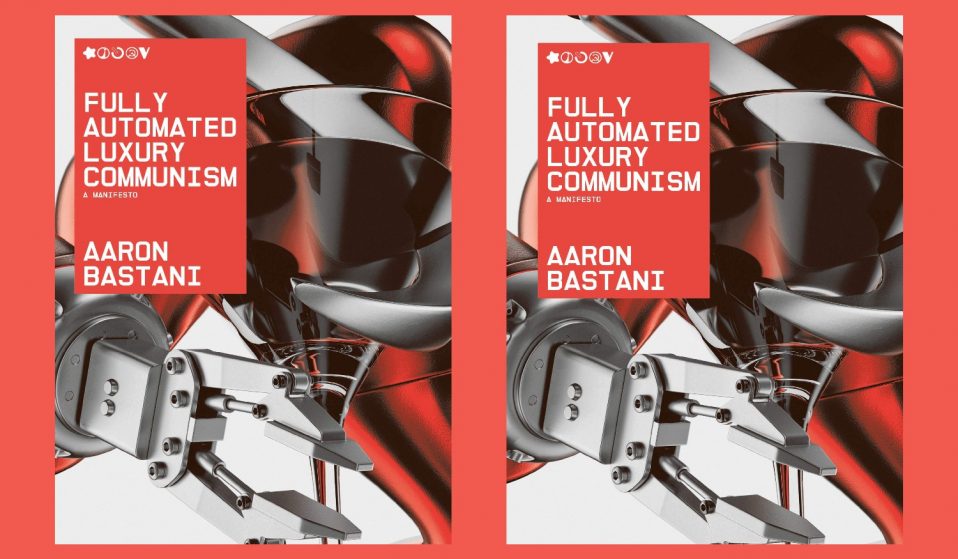 Do we allow technological innovation to be directed towards profit and social control? Or can we somehow re-route towards emancipation? We talk to Novara Media’s Aaron Bastani about his vision for the future.

Do we allow technological innovation to be directed towards profit and social control? Or can we somehow re-route towards emancipation? We talk to Novara Media’s Aaron Bastani about his vision for the future.

It’s 2019: neoliberal orthodoxy is collapsing, and digital platforms are becoming the predominant locations of cultural production. An explosion of news sources, opinion and ideological friction on social media has given rise to an emerging class of political influencers. Through a blend of socialist critique and self-branding, Aaron Bastani and his Novara Media colleague Ash Sarkar have become eminent figures of the pro-Corbyn left.

But while this sea-change in political discourse is unfolding, the profits are being reinvested. Having achieved a seamless, pervasive commodification of online sociality, Big Tech companies have turned their attention to infrastructure. Attempts by Google, Amazon and Facebook to achieve market leadership, in everything from AI to space exploration, risk a future defined by the battle for corporate monopoly.

This underpins the central challenge of Aaron Bastani’s first book, Fully Automated Luxury Communism (FALC): Do we continue to allow technological innovation to be directed towards profit and social control? Or do we instead re-route towards emancipation?

For Bastani, the problem is essentially an ideological one. Fully Automated Luxury Communism outlines how proximate developments (automation of labour, cheaper renewable energy) and more speculative ones (asteroid mining!) may endanger the imperatives of profit and scarcity essential for capitalism’s survival. Moving beyond our present situation, he argues, simply requires making the case that these advances should be put towards collective rather than private gain.

The major obstacle to this vision is the joint demand of national governments and Big Tech for complete knowledge of our desires, purchases, conversations and movements. Exploitation of what Shoshana Zuboff terms “behavioural surplus” – the use of datafied human experience to make predictions of future behaviour – seems to provide a durable dynamic for both capitalist expansion and governmental control. Having codified a sprawling surveillance architecture in the Snooper’s Charter, the UK government’s racialised application of facial recognition software exemplifies this prospective danger.

So could FALC offer a viable alternative? Or is it just wishful thinking? We spoke with Aaron Bastani to find out more about its prospects in a datafied economy.

What is Fully Automated Luxury Communism? How would you summarise it?
What the book is trying to summarise is effectively an observation. We see a number of technologies already unfolding in the present: renewable energy, automation, machine learning, artificial intelligence, synthetic biology and cellular agriculture which will create the possibility of a very nice world to live in.

The premise that this engages with is a world of crisis. Climate change, demographic aging, the end or collapse of neoliberalism. I look at these technologies and I say not only can they remedy these problems, but they can actually create the possibility for a much more sophisticated, much more civilised society.

That’s not communism. You could say that’s a variant of 20th century social democracy. So why have I called the book Fully Automated Luxury Communism? Because while in the short-term we should look to a progressive political project akin to socialism or radical social democracy, I believe that as these tendencies unfold they will undermine some of the core characteristics of capitalist production.

It would mean that selling your labour for a wage would no longer be the case. It would mean you would no longer have production for profit and exchange. And Marx says that it would basically be the end of any difference between leisure and work, between mental and physical work.

This is not inevitable; it has to be politically contested. But these technologies should orient us in the present, and in the longer term, we should have our eye on a post-work, post-scarcity society.

June was the hottest month on Earth in recorded history.

We need big action to decarbonise the world economy over next 20 years in a way which reduces inequality within & between nations.

I explain how that can be done in FALC. We have to do this!https://t.co/462inDpJgU

Your book argues that through technological advances in the areas of labour and energy, we will reach a point where scarcity is replaced by abundance. Does this perspective ignore the monitoring, measuring and prediction of user behaviour as a new source of profit?
Data is a hugely interesting area. For instance, in the allocation of Universal Basic Services if you want to roll out a free universal bus network, Big Data would be a hugely important part of that. I think that basically feeds into a broader debate about politics.

The technologies are coming. They’re already here in certain instances. It’s the politics that surrounds them. We have alternatives: we can have public ownership of data in the citizen’s interest or it could be used as it is in China where you have a synthesis of corporate and state power. The Chinese government has access to WeChat, which is a payment system as well as a social network. If you jaywalk, through facial recognition you will be immediately fined through the WeChat system through your phone.

To me, the two alternatives that big data allows is an all-consuming surveillance state where you have a deep synthesis of capitalism with authoritarian control, or a reinvigorated welfare state where more and more things are available to everyone for free or very low cost.

One of the consequences of governments partnering with Big Tech firms is that it encourages exploitative practices. Many of the technologies suggested in FALC would require a greater collection of citizen data. Do you regard this as a necessary evil?
Clearly, Big Data can create incredible social innovations. But potential is one thing and actuality is another. Can you give the state all these powers, all this intelligence, all this data and expect it to act benevolently? I’d imagine you can’t.

So the subsequent question is how do you build fail-safes? That’s how people have been working with constitutions and polities for thousands of years. How do you build the perfect constitution? You probably can’t. Just as people in previous centuries talked about checks and balances, separation of powers, you need to provide something similar.

I would argue this can be achieved through public investment into cryptography, the anonymisation of data and so forth. But again, we can’t begin those discussions until we say, as a society, we want to at least try subordinating these potentials to the democratic project, rather than allow capitalism to do what it wants.

Social media has begun to stratify society in new ways. At its extreme, you have China’s social credit system, whereas in the West, influencer culture belies a kind of informal hierarchy. In a post-work environment, do you see data-driven social capital – the amount of followers you have, your influencer status – replacing economic capital?
It’s perfectly possible. I say in FALC that this isn’t a blueprint for utopia. All I’m saying is that there is a possibility for the end of scarcity, the end of work, a coming together of leisure and labour, physical and mental work. What do we want to do with it? It’s perfectly possible something different could emerge where you have this aggressive form of social value.

The thing about the performance of the self is we’ve been doing it for a long time. Its most obvious manifestation recently was the situation between the  NSPCC and Munroe Bergdorf. Neoliberalism is fundamentally about the performativity of moral values. You don’t really have to believe that LGBTQ people are the same as straight people. You have to perform the belief and the second that performance comes into contradiction with actually having to stand up for an LGBTQ person that disappears. That, to me, speaks to a very sterile normativity.

I think that’s a decent explanation of what’s powering the rise of the far right. Actually, we’re now seeing quite a few people didn’t believe in this stuff, many more than we thought. And, so although that performance of the self precedes digital culture, it amplifies it to some extent.

Lots of people have asked what I mean when I say I’m a communist. What I mean is that in the next 15 years, 1 in 5 jobs in the UK will be automated (1 in 3 in the North, and 40% in Hayes & Harlington). What does that mean for workers?

One of the central appeals of FALC is that it implies an emancipatory society can be reached through personal and collective luxury. How can a collective movement be built around what you term as “luxury populism”? And who is your subject?
I would say it’s fundamentally anybody who has to work to live, or who is out of work, or who can’t work. Basically, anyone who doesn’t live off capital or rents, which is the historic working-class definition.

I think the thing that’s been beaten out of everyone since 2010 is one of the prevailing tenets of neoliberalism: work hard, you can be whatever you want to be, that you’ll get a job, be well paid and enjoy yourself.

In 2010, that disappeared overnight, the rules of the game changed. For the status quo to continue to administer itself,  it had to change common sense. You see this with Jordan Peterson; he’s saying you have to know your place and that’s what will make you happy. To me that’s the only future for conservative thought, how else do you mediate the inequality and unhappiness?

Fully Automated Luxury Communism couldn’t be more different. You could absolutely have it all. If you live in Sunderland or Belfast and you walk through London and see money everywhere, people having fun, there’s no reason that should not be available to you.

An example of luxury populism can be seen in indigenous movements surrounding renewables, green activism in North America. They not only opposed the pipeline and fracking, but also put forward a community-owned renewable alternative.

Fundamentally, I don’t think we can rapidly decarbonise our economies without working people understanding that it’s in their self-interest. A green economy means better quality of life. It means more work. Luxury populism feeds not only into the green transition, but the rollout of Universal Basic Services and even further.

Linkedin
RELATED ARTICLES
OTHER ARTICLES
Over the weekend, the United Families & Friends Campaign organised a protest calling for an end to deaths at the hands of the police.
The campaigning charity are on a mission to increase inclusion, participation and representation of Black people in trail running.
Following the release of their third album, the duo talk collaboration, family and connecting with the dead.
Whether it was seacoalers in Northumberland or the miners’ strike, the photographer was always fully immersed in the story he sought to capture.
The hate Just Stop Oil faced after throwing soup over a Van Gough painting has been immense. Here, they explain why it won’t deter them.
A campaign led by ex-torture survivors and refugee organisations has left the Tories with no planes left to carry out their callous scheme.