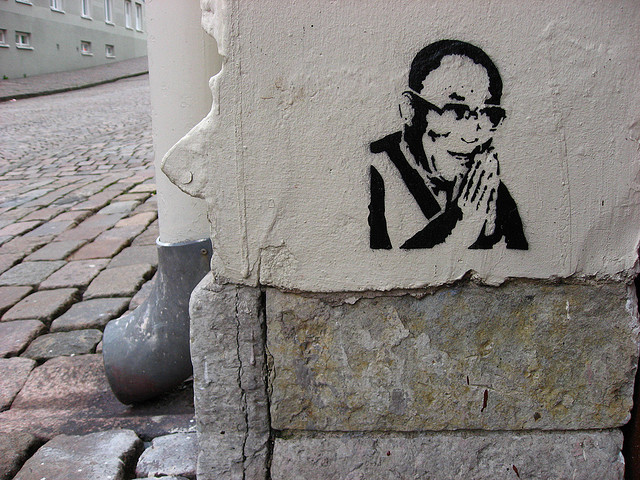 The Dalai Lama may have gotten one up on China with a Glastonbury 2015 spot.

A Glastonbury spot is a natural for Tibetan Buddhism’s leader. And by dubbing him a Jackal, Splittist and Wolf in Monk’s Robes, China has made him sound like the most rock n’ roll monk ever.

The Dalai Lama shot to the top of the list of the most exciting confirmed name on the 2015 Glastonbury line-up over the weekend (sorry Lionel Ritchie). The Tibetan spiritual leader’s new year schedule leaked that he’s giving a talk at Worthy Farm on the final day of the world’s largest greenfield festival, which runs from June 24-28. (His holiness might have prematurely let the news out—it has since been removed.)

The news surprised some, but he’s a natural for Glasto. For years the Chinese government has been hellbent on trying to pin a rock band-esque name to the Dalai, calling the Nobel Peace laureate a “Jackal,” a “Splittist” (apparently a Marxist Chinese insult) and a “Wolf in Monk’s Robes.” (Chinese Communist forces invaded Tibet in 1951 and expelled the Dalai Lama in 1959 after a failed uprising.)

He has also been inspiring global culture for decades. Beastie Boys tunes like “Bodhisattva Vow” and “Shambala” are testimoney to this. The Tibetan monk was a particularly strong influence on the Beasties’ MCA, Adam Yauch, who interviewed him in 1995 (Read the exchange here.) His encounters with Tibetan Buddhism not only expanded the band’s world view but led to them to organise a series of Tibetan Freedom Concerts around the world in collaboration with other musicians including Björk, De La Soul, Rage Against the Machine and the Red Hot Chili Peppers.

A 2015 Glastonbury appearance also comes as Beijing is intensifying efforts to isolate the Dalai Lama from world leaders. Pope Francis refused to meet the Dalai Lama, the Vatican said last month it was due to fears it could hurt relations with China. A summit of Nobel Peace Prize winners in South Africa last October was cancelled because the South African government denied a visa to the Dalai Lama. Beijing put a “freeze” on trade and political discussions with Britain for more than a year after David Cameron met with the Tibetan spiritual leader.

Governments might give into China’s bullying, but appearances at events like Glastonbury could have a greater impact on winning over hearts and minds. After all, what will shake up culture more? Sitting down with David Cameron, or lighting up the next MCA?

Linkedin
RELATED ARTICLES
OTHER ARTICLES
After building his reputation covering the US civil rights movement in the 1960s, the photographer went on to produce some of the most enduring images of the past century.
The pro skateboarder withdrew from the 2020 Olympic Games so he could come out as trans. Now, he’s hoping to encourage others to live as their authentic selves – within the sport and beyond.
After fleeing the war in Ukraine, people are finding it impossible to secure affordable and decent housing in the UK.
A group of aid workers face prison for helping to save people fleeing their homes at sea. If they are charged, it will have a chilling effect on humanitarian efforts.
Jeffrey Henson Scales intimate portraits and protest images of the BPP and its leaders offer a rare insight into organisation at a time of societal upheaval.
Taking us through one of the most dynamic years in recent history, Laylah Amatullah Barrayn new photo book contains tender yet confrontational portraits.