News & Politics / Activism / Dead Women Can’t Vote: Why we chained ourselves to Parliament 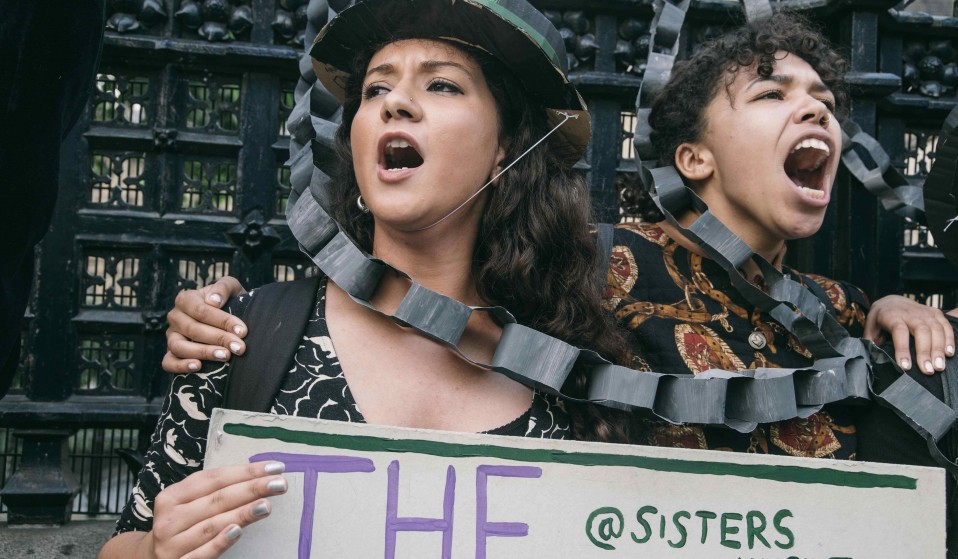 Direct action group Sisters Uncut donned suffragette outfits and chained themselves to the Houses of Parliament last night, as an expensive piece of art was unveiled inside to commemorate the struggle for women's suffrage. Why? Because dead women can't vote.

Direct action group Sisters Uncut donned suffragette outfits and chained themselves to the Houses of Parliament last night, as an expensive piece of art was unveiled inside to commemorate the struggle for women's suffrage. Why? Because dead women can't vote.

Sisters Uncut has often been described in the media as the “modern-day suffragettes” following our invasion of the red carpet at the Suffragette film premiere last year. We have grown fast and become infamous for our disruptive protest tactics: having dyed the Trafalgar Square fountains blood red and barricaded the entrance to the Treasury. 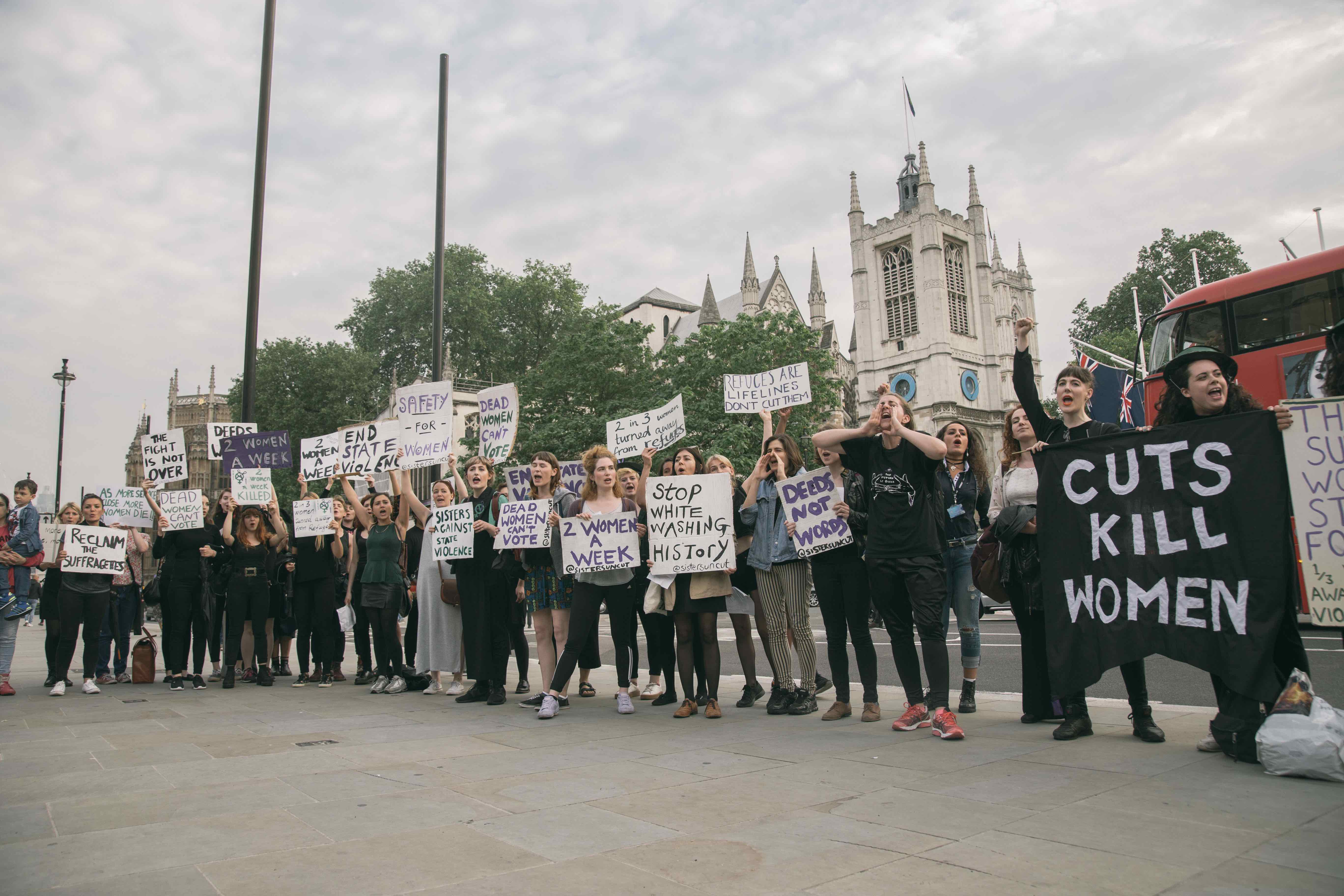 In discovering that an expensive art installation would be revealed in Parliament on 7 June 2016 to commemorate the suffragettes – the women who struggled for the right to vote in Britain – we decided to plan a visual and powerful direct action to target the guests as they left Westminster Hall, the site of many historic suffragette protests. The disruption of this parliamentary launch aimed to highlight that the fight for women’s rights, safety and independence is not over: after all, dead women can’t vote. 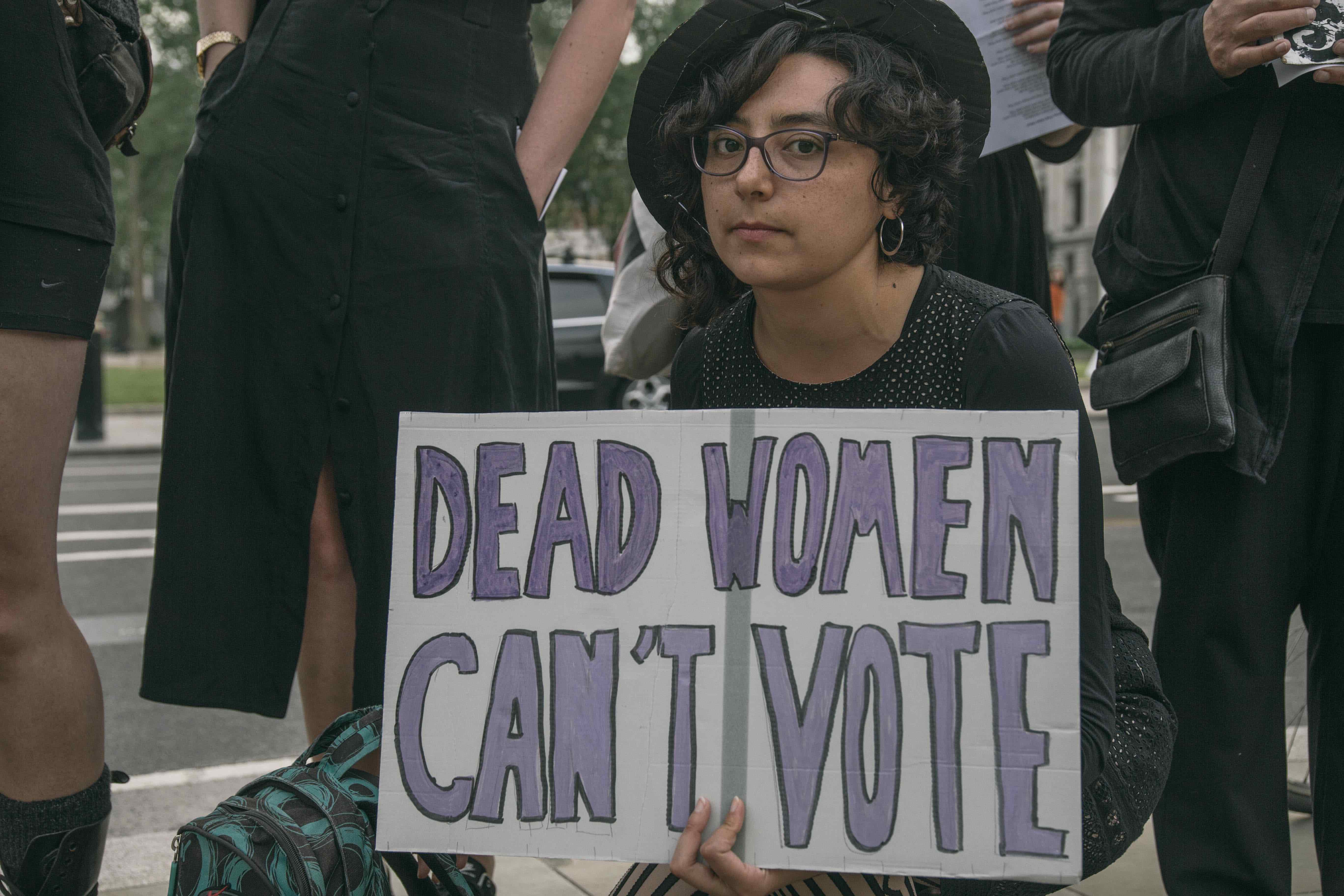 Currently two women a week are murdered by a partner or ex-partner in the UK. Domestic violence services are a lifeline for women fleeing violence, yet brutal austerity cuts mean there are not enough to meet demand. The latest statistics show that refuges are now forced to turn away two in every three women who approach them for safety. 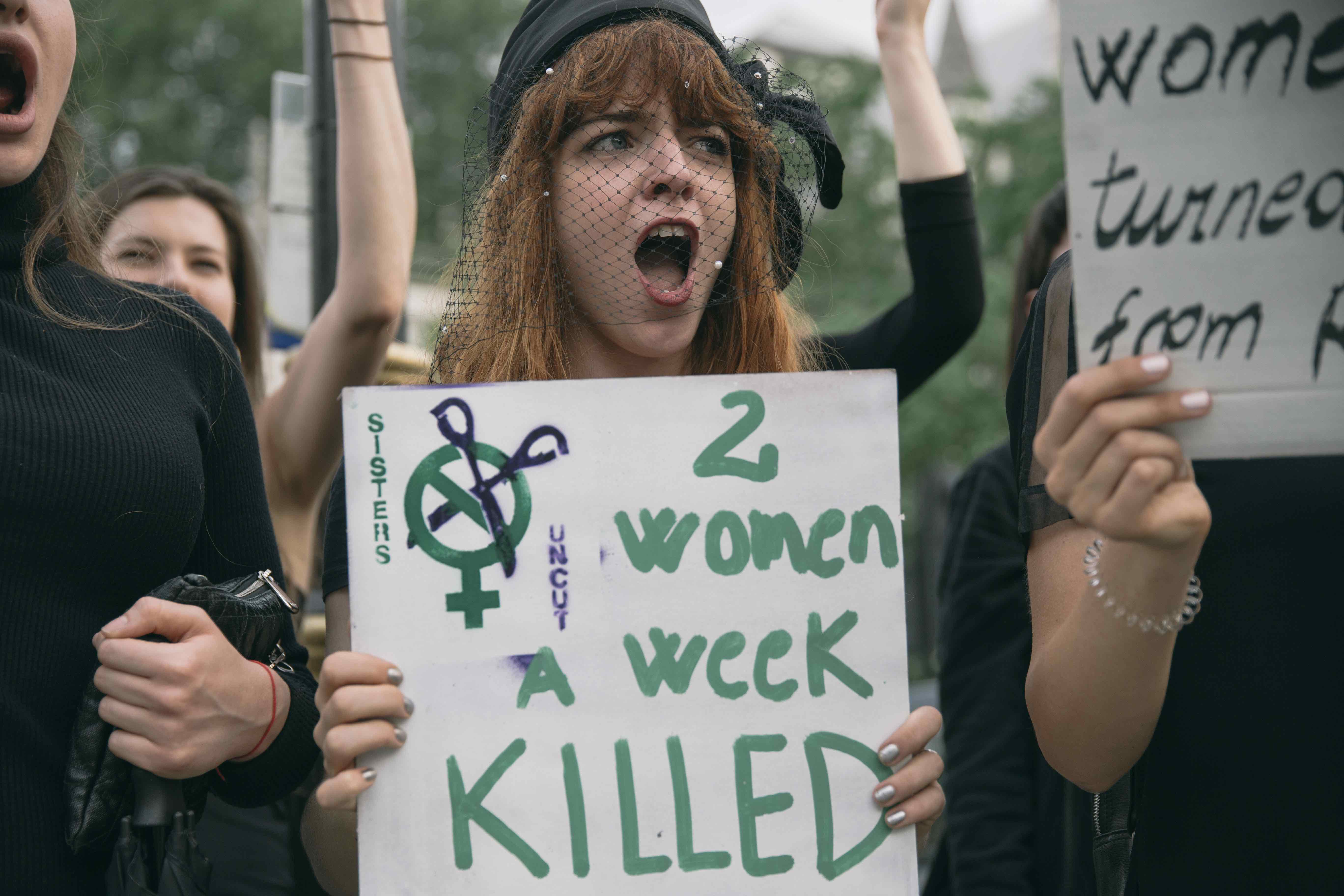 Just this week, Newcastle Women’s Aid is closing its doors after 40 years of service, alongside Broken Rainbow, a specialist service supporting LGBT survivors of violence. Ultimately, if this government wishes to properly honour the memory of the suffragettes, empty gestures are not enough: they must secure women’s rights today by reversing austerity policies and the life-threatening cuts they have made to domestic violence services. 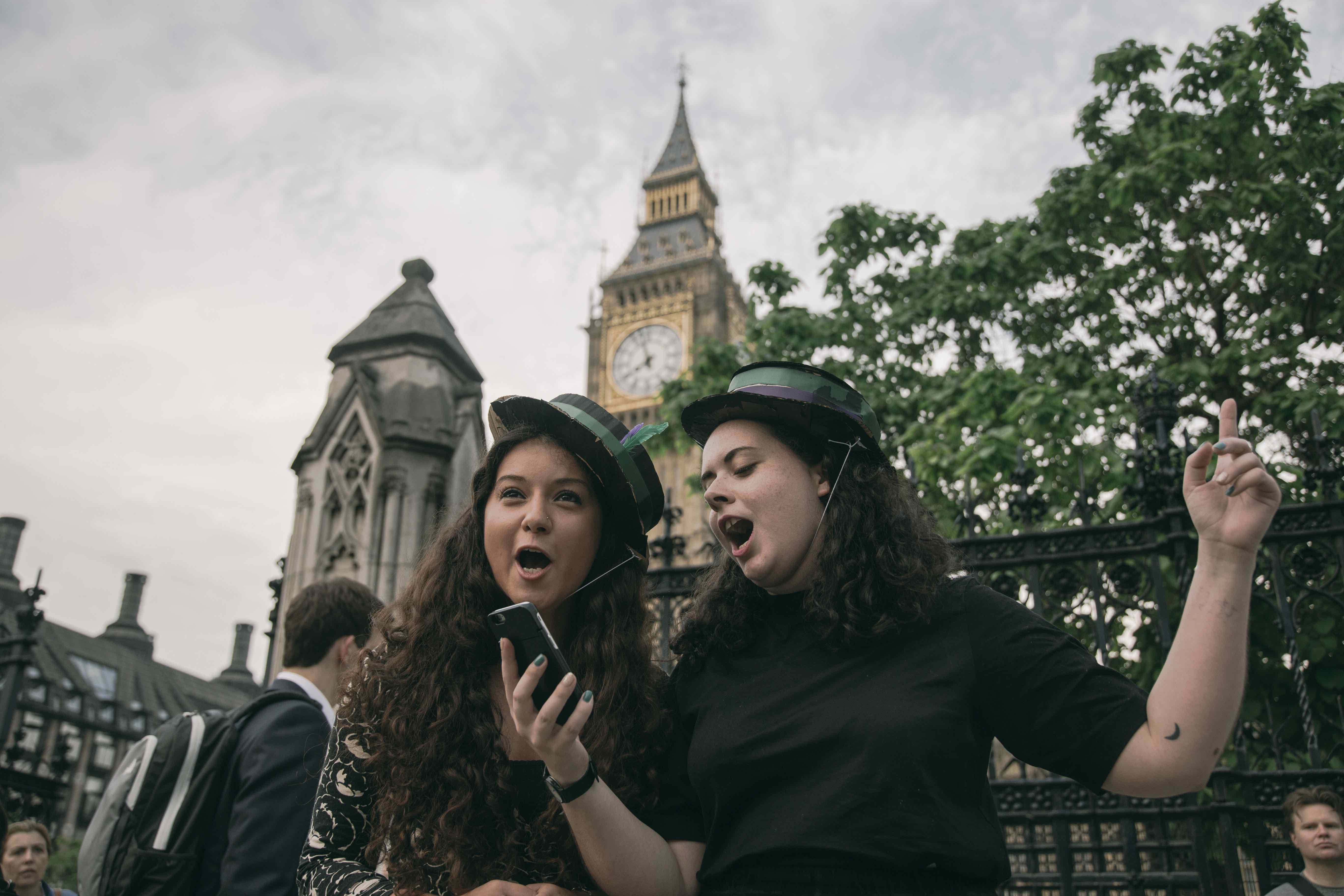 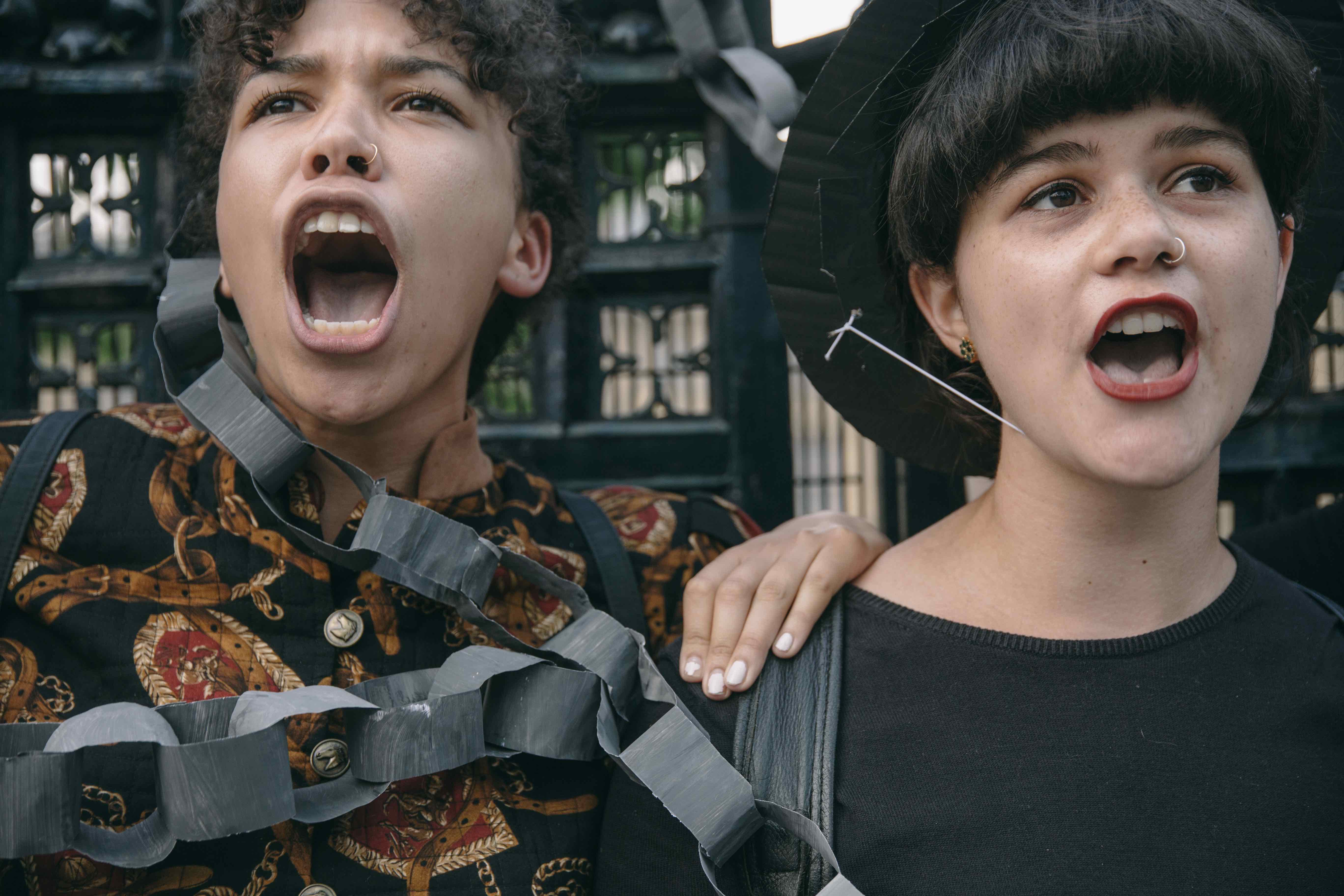 Sisters Uncut activists of all ages and backgrounds wore sashes, placards, old-fashioned hats and even long black skirts, holding smoke flares in the traditional suffragette colours of green and purple. We chanted lines from a Pankhurst speech, which are still relevant today:

“We were called militant, and we were quite willing to accept the name. We were determined to press this question …  to the point where we were no longer to be ignored by the politicians”, (E Pankhurst, Freedom from Death speech, 1913). 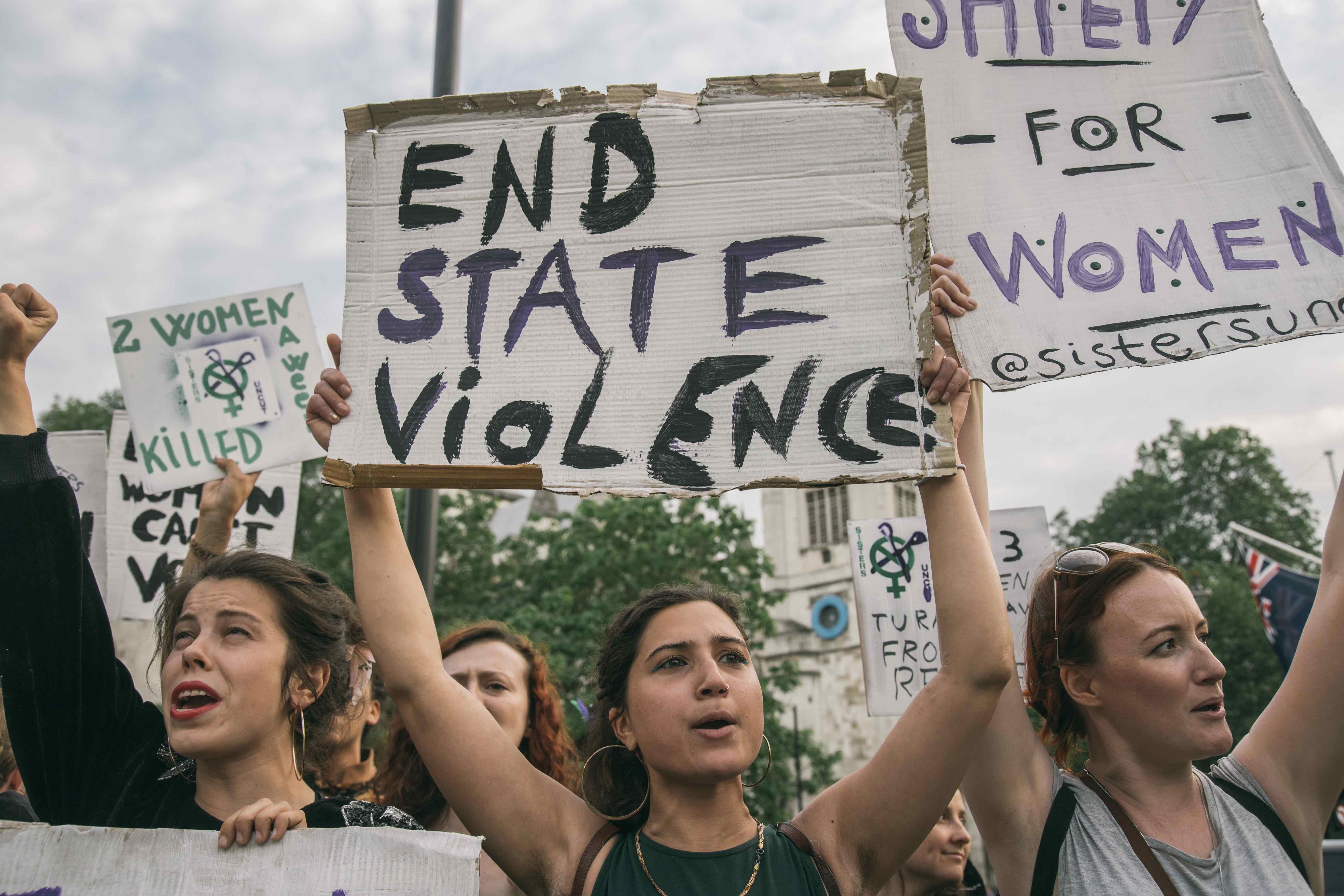 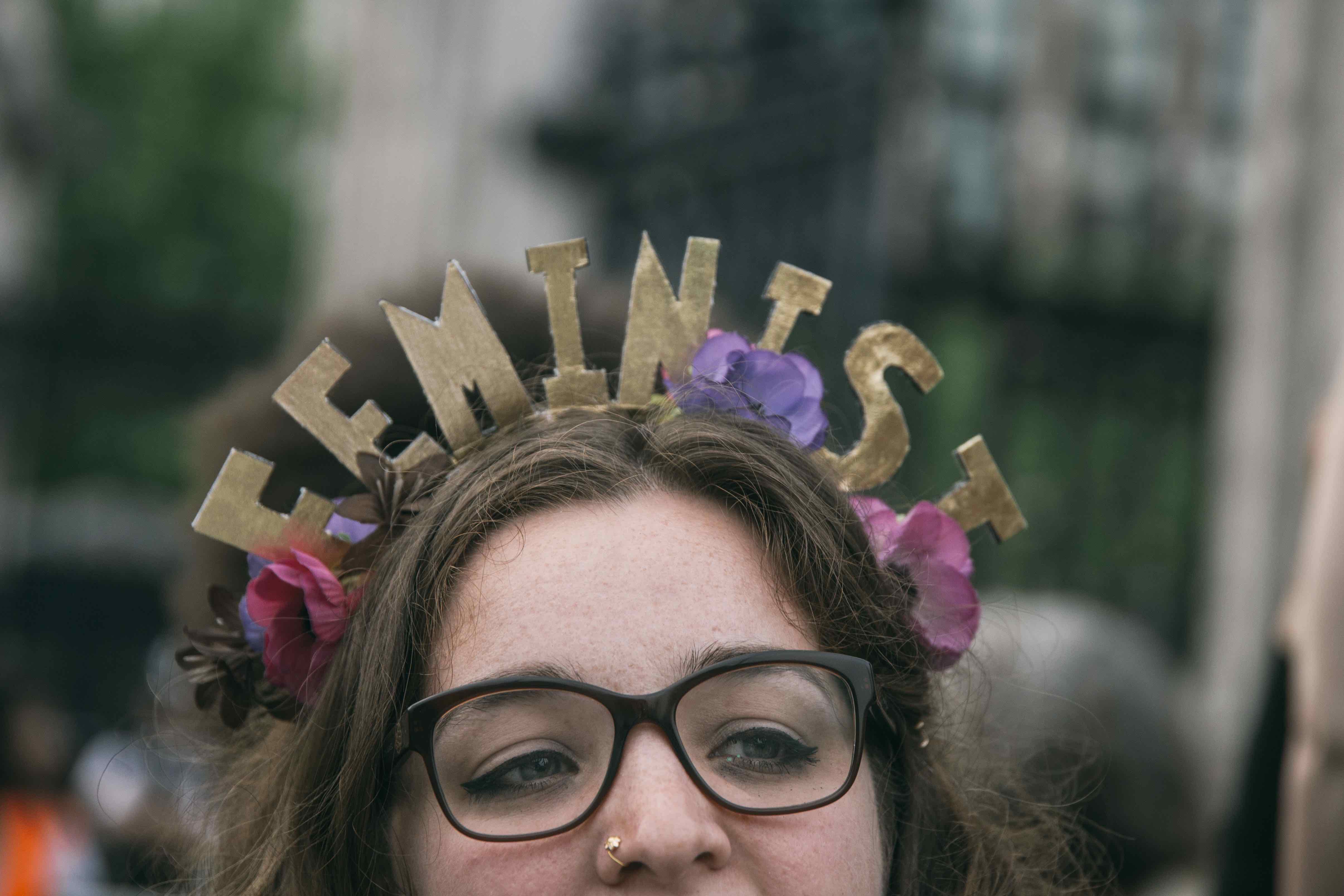 In following in their footsteps, we used suffragette tactics. We chained ourselves to the gates – but with black handmade paper-chains, rather than real handcuffs – highlighting the irony that the direct actions which won women the vote, and which are now apparently being commemorated by the British government, are still illegal and arrestable offences a century on. Demonstrations in Parliament Square are more regulated today than ever. 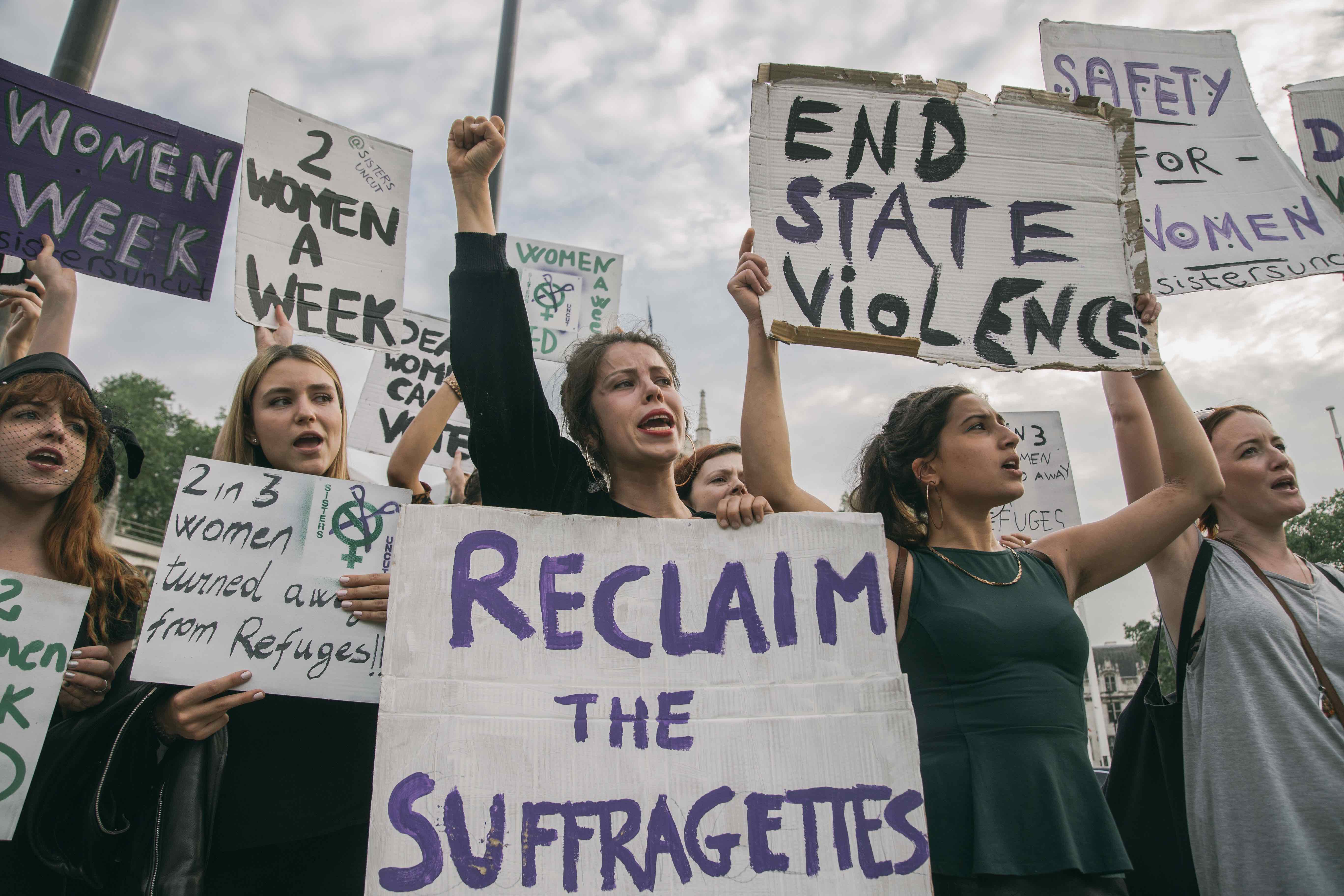 It is crucial to stress that this was not a protest against the artwork itself – and indeed Sisters Uncut welcome and celebrate this artwork, created by a talented female artist, which most importantly, powerfully depicts how women’s right to vote was won through a mass-movement. However, we refuse to allow the current government, whose violent austerity agenda is ruining women’s lives, to use the symbolism of the suffragette struggle to service its own reputation. 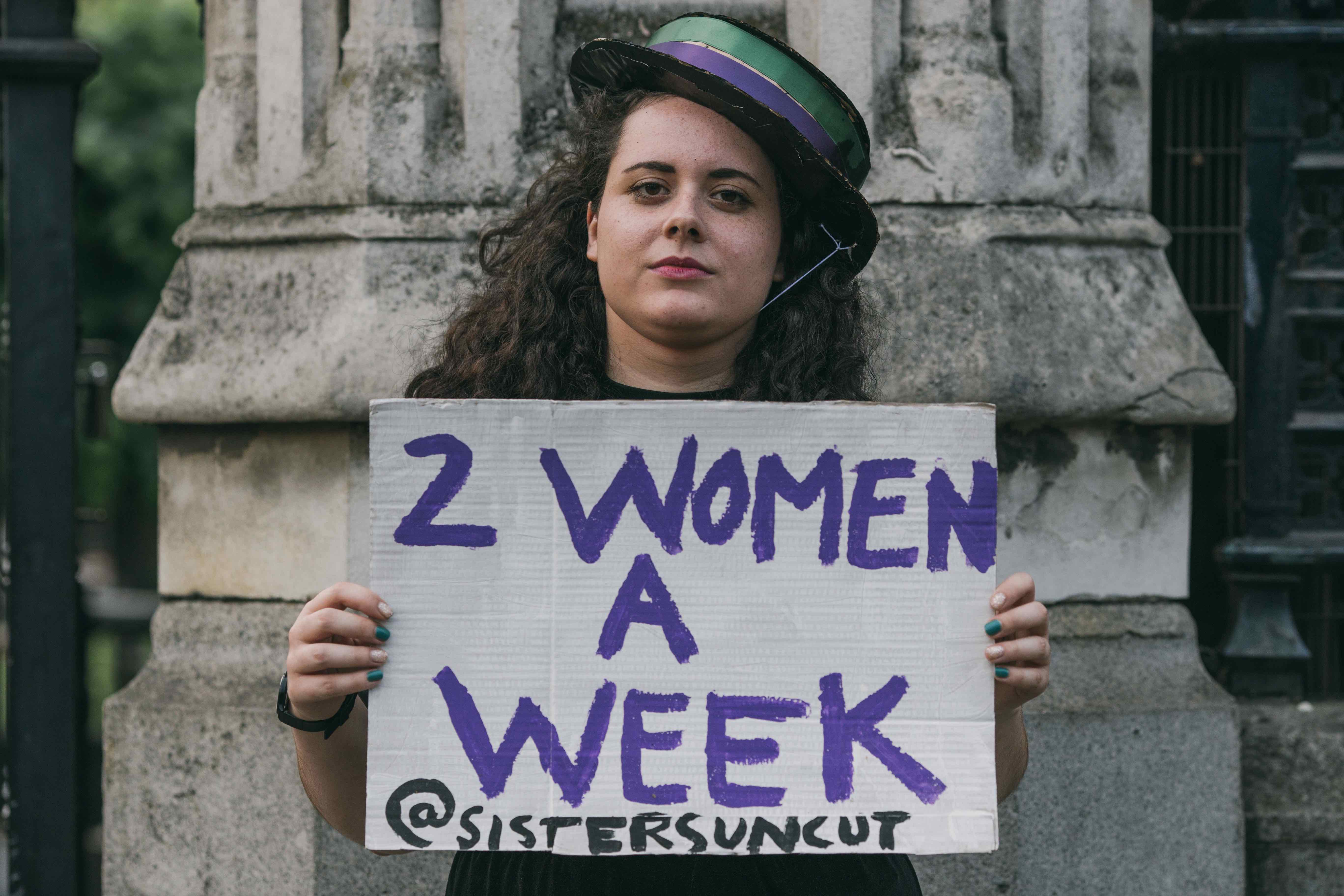 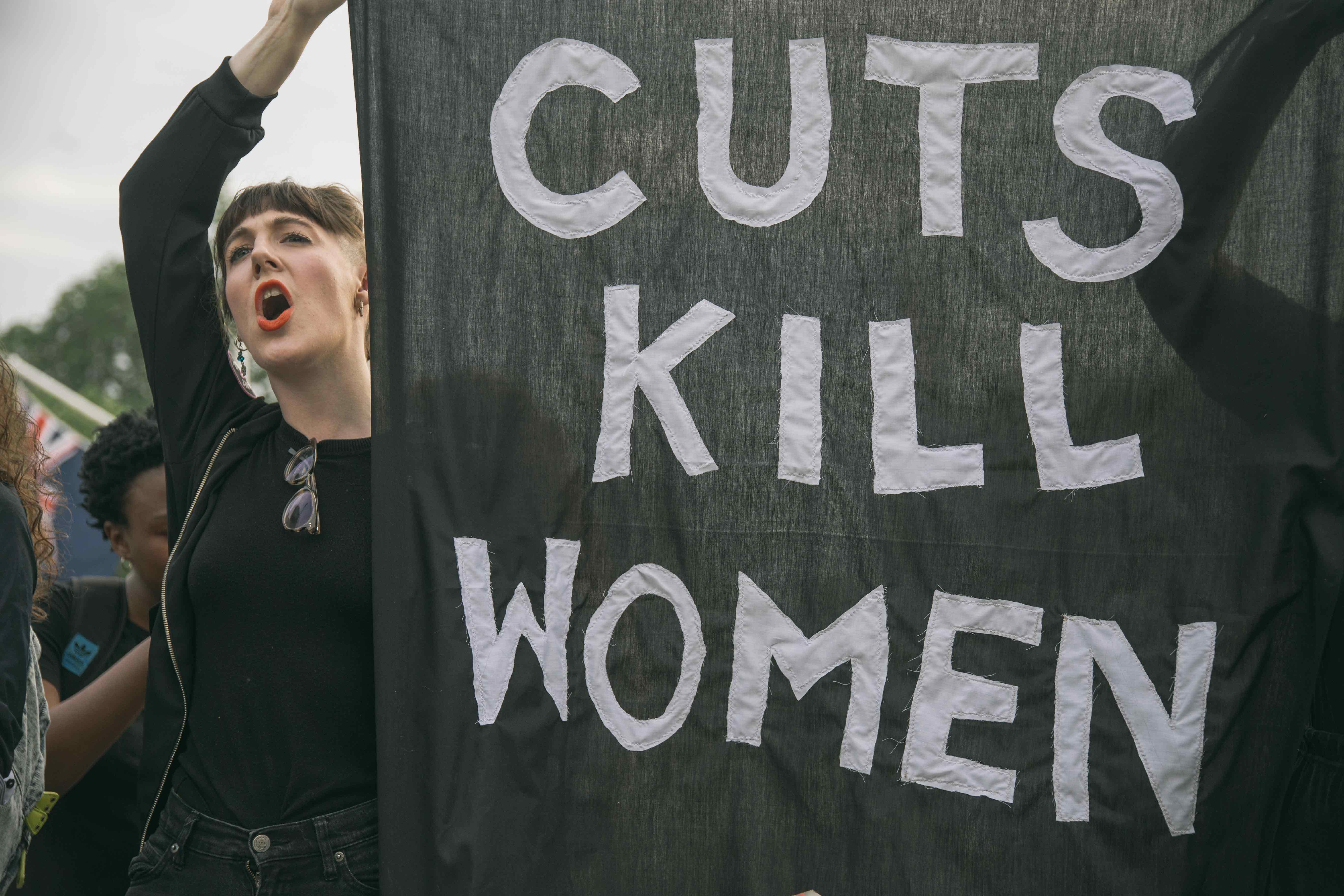 The suffragettes were enemies of the state; they were ridiculed, imprisoned, treated as terrorists and tortured by the state. Today, state violence against women continues in the form of cuts to public services – and so we organise in the spirit of the suffragettes. We are certain that, had they been alive today, they would have been outside Westminster Hall protesting with us, rather than inside with the state that tortured them. 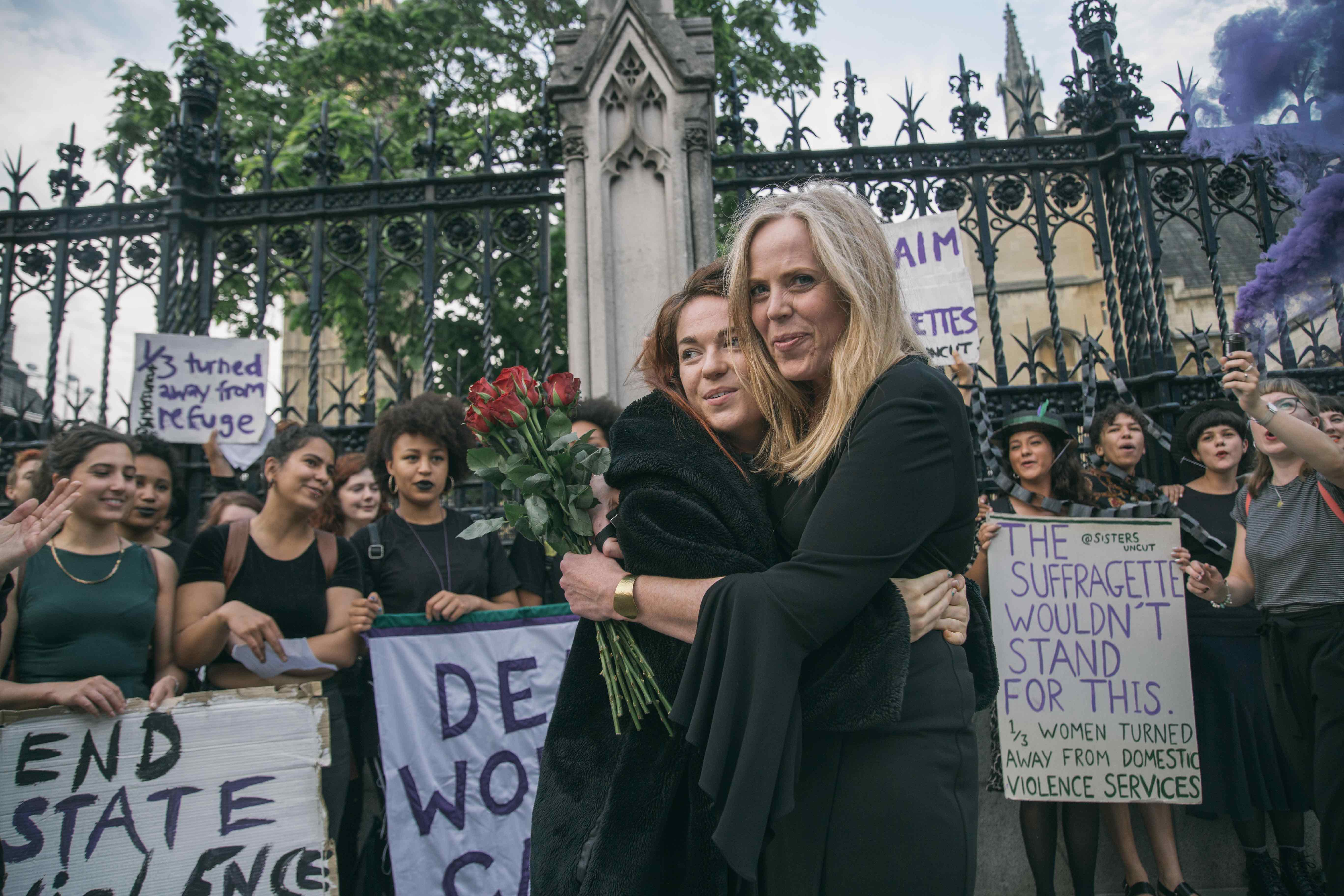 In our efforts to reclaim the suffragettes, we also want to reclaim their diversity, as we recognise that modern day depictions often white-wash history. For instance, the contribution of Punjabi Sikh, Sophia Duleep Singh, is often neglected in mainstream historical accounts of the suffragettes despite being a leading figure amongst the activists who marched to the House of Commons in 1910 and were attacked and molested by the police – an event which became known as ‘Black Friday’. In reclaiming the movement we are determined to ensure that these stories are told. 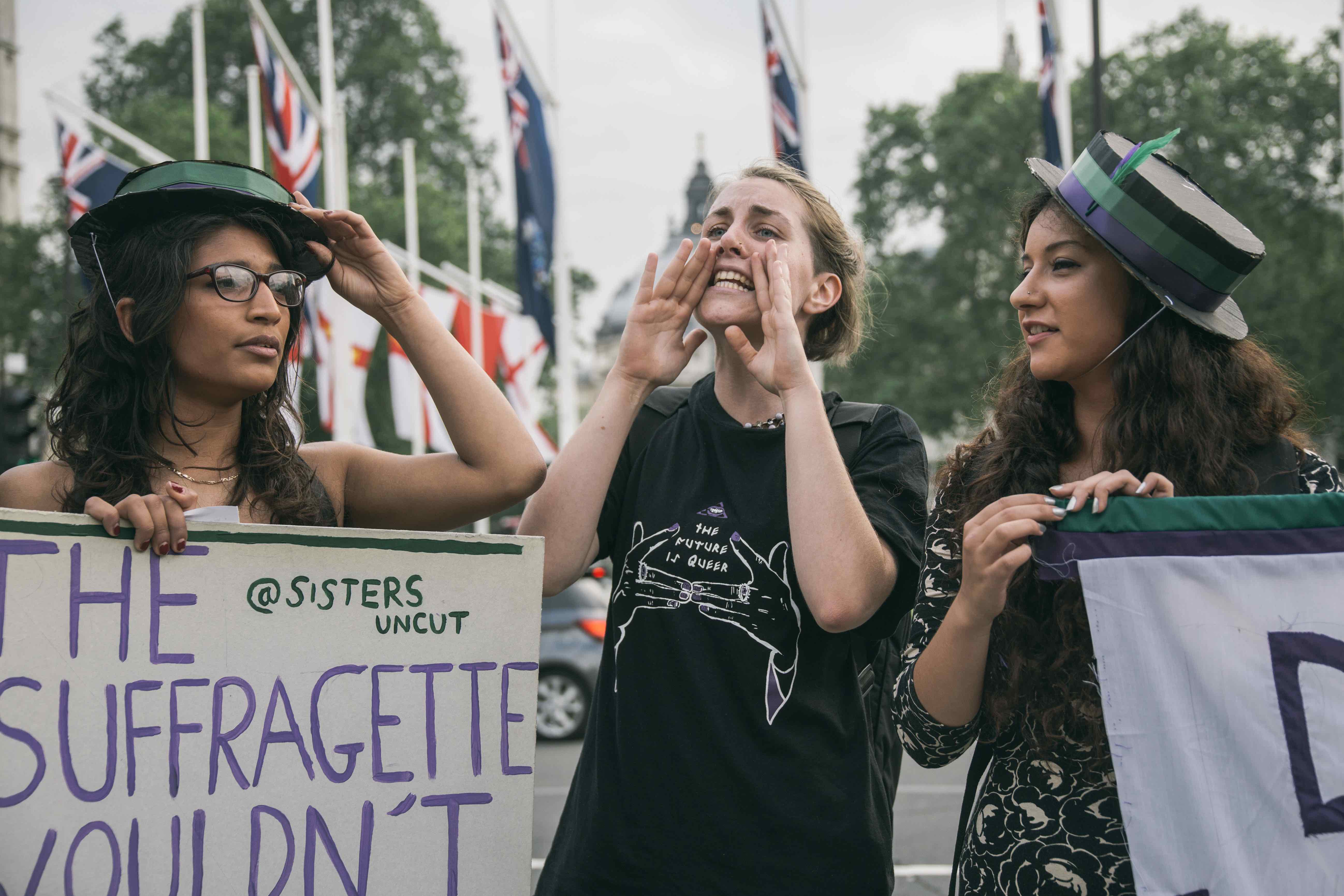 At the same time we recognise that the suffragettes were problematic in a number of ways, with imperialist tendencies and connections to fascism – but in reclaiming the suffragettes, we are making the modern-day women’s movement our own, as intersectional feminism is at the very heart of Sisters Uncut’s work. This is because we see that black, working class, LGBT, mentally ill and disabled women are disproportionately burdened by cuts to domestic violence – with thirty-two of the domestic violence services that have closed since 2010 being specialist services for BME women. 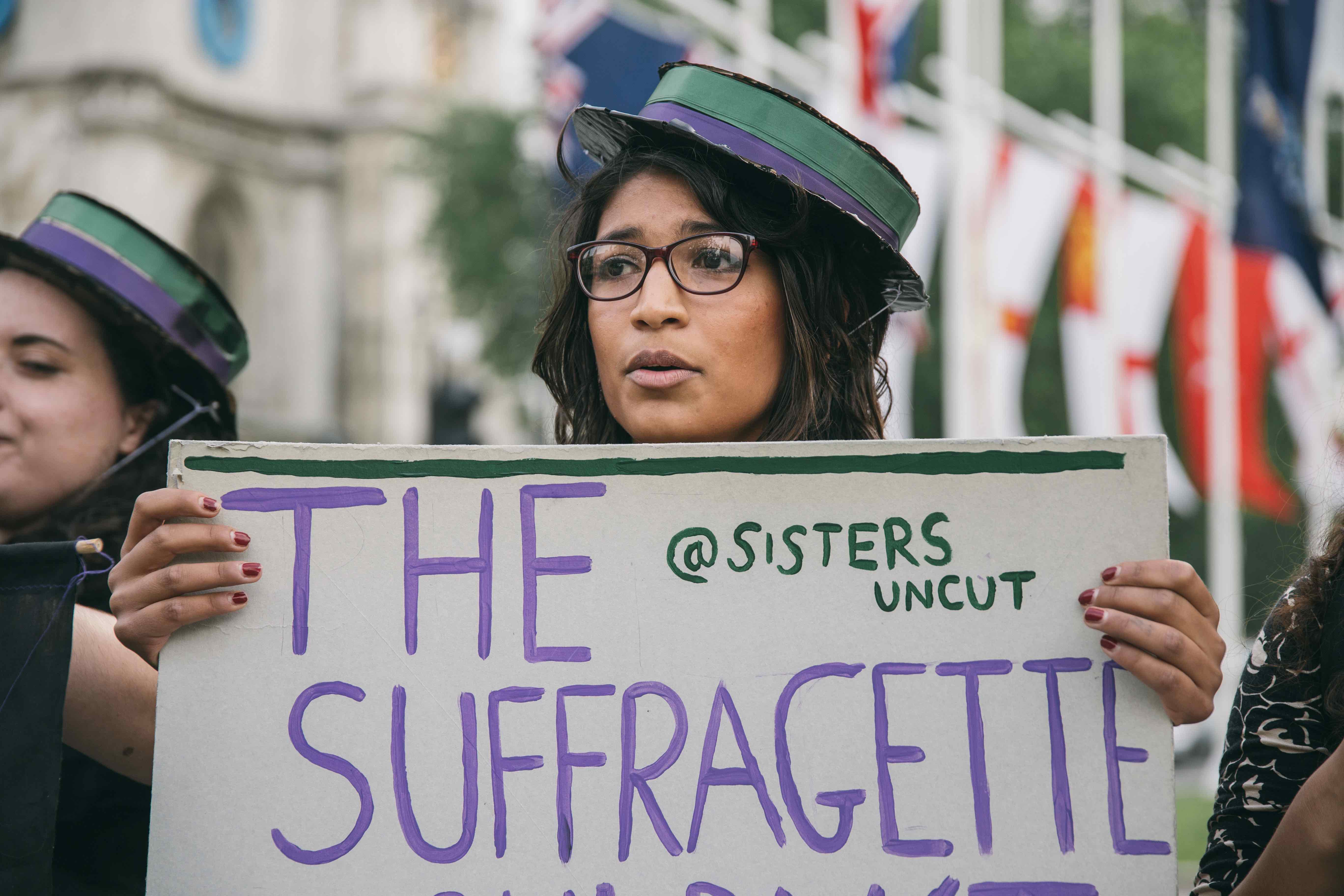 As the artwork unveiled yesterday reveals: the suffragettes were successful because they were a mass-movement. Likewise, Sisters Uncut has quickly become a mass movement; we grew so large that our London groups separated to begin working more within local communities, whilst regional groups have popped-up across the country. If our demands for funding to domestic violence services are to be heard by the political elite, we need to continue growing and continue showing that dead women still can’t vote.

Linkedin
RELATED ARTICLES
OTHER ARTICLES
Thousands attended the annual event this year to wheelie through the city and call for ‘knives down, bikes up’.
Yesterday thousands gathered outside Buckingham Palace after news of the Queen’s death broke.
Rhiannon Adam spent three months capturing an ageing society wracked by division, isolation, and the aftermath of scandal.
The two-day long event returned to London this year, showcasing a spectacular parade, steel bands and Caribbean food.
A group of young Palestinians have found temporary freedom in the act of parkour, reimagining wreckage and ruins as a series of high-octane playgrounds.
Birdy Chu reflects on documenting the historic moment in which the territory was formally passed back from the UK to China.