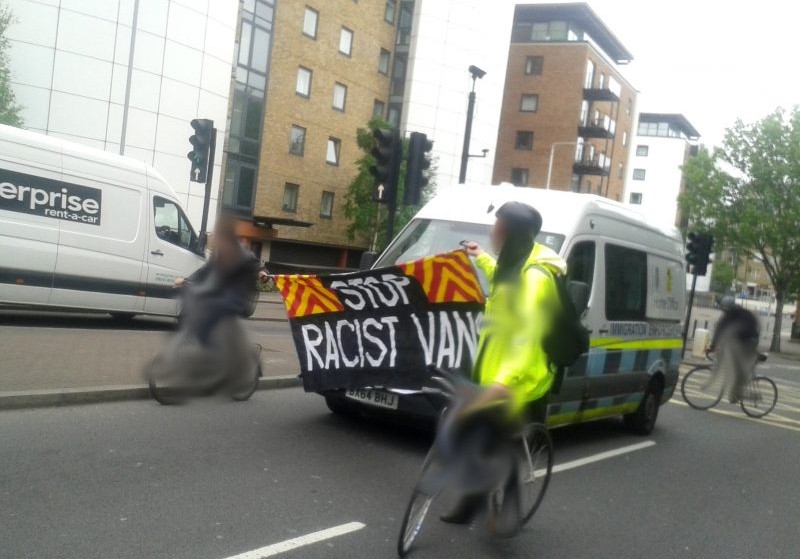 Border enforcement raids have become a regular fixture in Britain, so yesterday activists took matters into their own hands to halt the racist round-ups.

Border enforcement raids have become a regular fixture in Britain, taking to your bike to provide an alternative escort is just one effective way of protecting our communities.

Instead of powerlessly scrolling through their depressing political newsfeeds, a group of Londoners got on their bikes yesterday in a formation of solidarity and everyday activism.

Encircling an immigration enforcement vehicle on its way to carry out a raid, the cyclists carried a banner emblazoned with the message “STOP RACIST VANS” through the capital. The convoy aimed to raise awareness of the existence of these vans, and to disrupt the daily missions to round people up and detain them indefinitely. And it’s about time too.

Immigration enforcement officials work by attempting to infiltrate neighbourhoods, trying to force their way into homes and businesses. Calling attention to raids in such a way as to remind officers that fear mongering will not be tolerated is a way to provide resistance peacefully and simply.

The rise of Western right-wing sensibility can leave many feeling helpless, as people seem to be becoming more and more out of touch with each other. Reading about incidents of xenophobia and hate related assaults brings  a wincing despair. Currently in the UK, the upcoming general election is covered in the press as bickering about leadership, and it’s easy to lose sight of how ordinary individuals fit into that narrative. But there’s no need to throw up your hands. 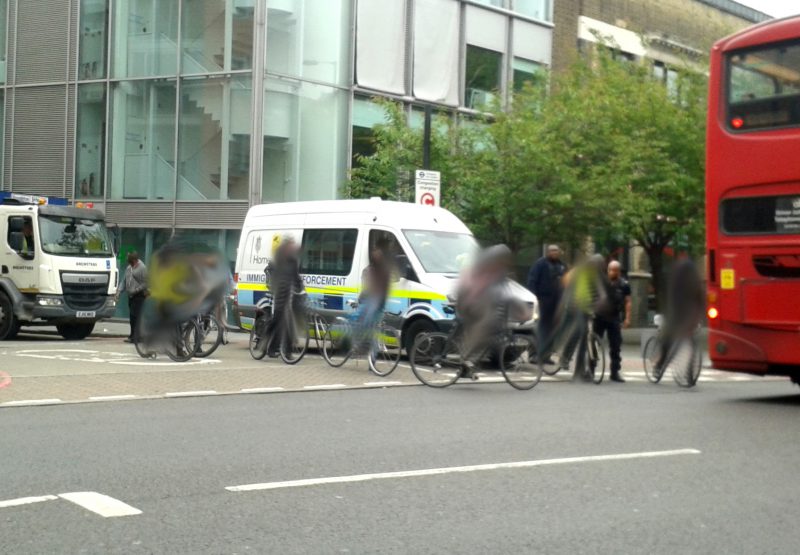 Knowing what to look for and being aware of your surroundings is the first step in affecting immigration raids. Not so much Theresa May’s controversial “Go home” vans of 2013 – instead, watch out for vans marked “immigration enforcement”, or unmarked vans accompanied by police cars.

Officers work in groups, sometimes with plain-clothes police, and while UKBA numbers should be displayed on their shoulders, they are often covered up to avoid detection. Raids can occur at workplaces and homes, as well as spot checks at underground and bus stations, a practice that has been accused of racial profiling.

Acting when officers are attempting a raid is the most critical time to intervene, as it is much easier to prevent immigration detention than it is to support detainees once imprisoned, or contest for their release in court. Activist groups like the Anti Raids Network collate information when raids are kicking off, and they’ll spread the word to get boots on the ground.

If you see someone being stopped by UKBA officers, or police on immigration grounds,  you can make the person immediately aware that according to their rights, they do not have to answer questions, and you can leave the scene with them. Recording the police is an effective deterrent, but ask permission to film the person being questioned if possible.

You can speak to officers directly, challenging their actions, and reminding them of the law. Without a search and arrest warrant, they are not allowed to enter a premises without the express permission given by a person for the stated purpose. Most importantly is getting the word out about what’s happening, for the community to rally behind each other. It’s a tactic that works time and time again.

When people are informed of their rights, and aware of their surroundings, it’s so easy to make a change, and step in to make a real difference. Get out there armed with information, and let’s stand together.

Linkedin
RELATED ARTICLES
OTHER ARTICLES
A new film from Berghaus traces the story of Adam Raja, who left behind a turbulent upbringing to discover the healing power of climbing.
Photographer Sean Maung reflects on documenting a small town in Pennsylvania afflicted by high levels of unemployment, poverty, violence, crime, and addiction.
The action took place in response to the 200 asylum-seeking children who were placed in hotels run by the Home Office who have gone missing.
A new law change is enabling Britain’s donor-conceived children to know the truth about their origins – but campaigners say the fertility industry must do more to protect people.
After blocking the Scottish government’s gender recognition reform bill, Westminster is now devising further changes to the law to make it harder for trans people to self-identify.
Social prescribing connects people with non-medical support to improve their health and wellbeing – but some experts worry it’s just a stick plaster solution.