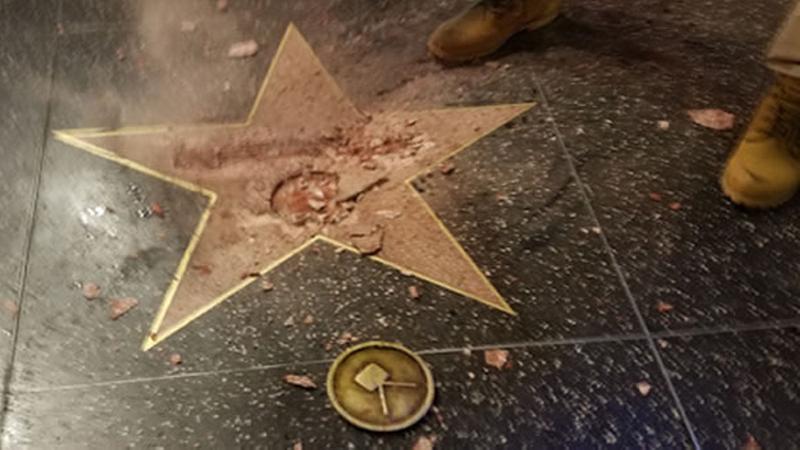 Artist Jamie Otis takes a sledgehammer and pickaxe to Trump’s star to protest against his obscene political campaign.

Artist Jamie Otis takes a sledgehammer and pickaxe to Trump’s star to protest against his obscene political campaign.

Before Donald Trump became the greatest embarrassment to American politics since, well… ever, he was an ego-centric but entertaining reality TV personality. In 2007, he even got his own star on the Hollywood Walk of fame.

When Trump announced his candidacy to this year’s presidential election, the joke got a whole lot less funny.

But it’s artist Jamie Otis who has had the last laugh, by taking a pickaxe to Hollywood’s ceremonial tribute to the the blonde blonde bouffanted grope-monster.

After destroying the star in the early hours of Wednesday morning, Jamie told Deadline that he intended to remove the Trump star and auction it to raise money for women who have come forward to publicly accuse the real estate billionaire of assaulting them.

Just as Trump has managed to push through the fallout of scandals on the campaign trail, from his incessant lying to insulting dead American soldiers and his “grab them by the pussy” remarks, his star proved too belligerent to remove in one piece – so Jamie unleashed his sledgehammer and pickaxe on it.

It’s not the first time Trump’s star on the Walk of Fame has become a site of artistic protest. In July, LA-based street artist Plastic Jesus erected a model border fence topped with barbed wire around it, to protest against the real border wall with Mexico Trump plans to build if elected.

But if Jamie thought his take-no-prisoners approach to removing Trump’s poisonous tribute might have left little trace of the contentious moment for others to desecrate, he’ll be bummed by news that Hollywood Chamber of Commerce’s president has announced the star is already being repaired. Better luck next time.

Linkedin
OTHER ARTICLES
Following the release of his latest album, the rapper talks about finding a new approach to songwriting, attitudes to poverty, and why his music is more than a political statement.
Ahead of the release of his new album, the producer reflects on his battle with drug use, getting into painting and what Madonna taught him.
In the latest instalment of Photographers in Conversation, the creator talks portraiture, platforms and taking inspiration from Little Simz.
As the Criminal Bar Association enters its fifth week of action, criminal barrister Russel Fraser explains why the legal professionals have walked out and how action is likely to escalate.
The author discusses her new memoir, which offers a sobering reflection on the racism and otherness she’s experienced along with a joyful celebration of her culinary heritage.
Photojournalist Fiora Garenzi spoke with people still living in Eastern Ukraine, an area which seen some of the heaviest fighting since the war began.