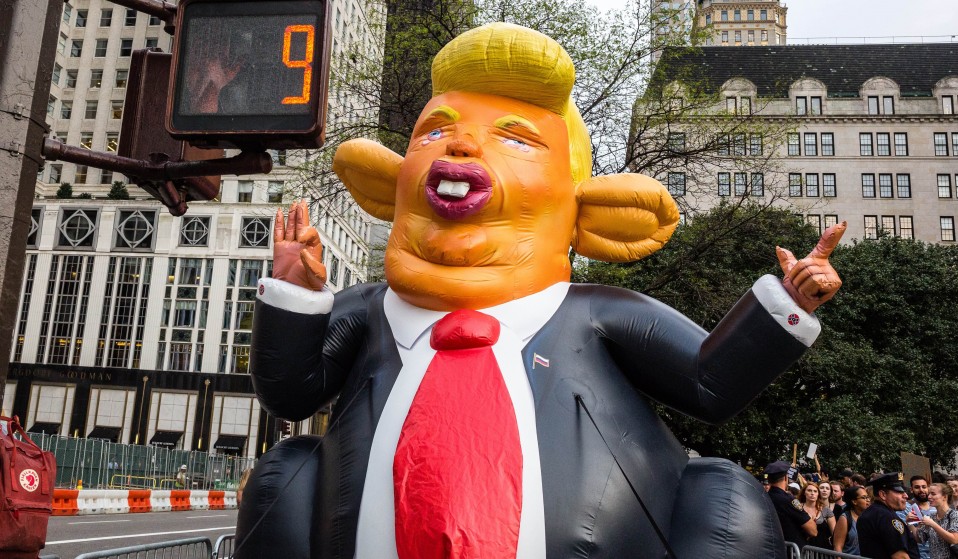 Trump may still visit the United Kingdom, but after mass protests and the promise of more he will no longer get the red carpet and royal treatment.

Trump may still visit the United Kingdom, but after mass protests and the promise of more he will no longer get the red carpet and royal treatment.

On a miserable night on 31 January 2017, the streets of cities across the United Kingdom erupted into mass protests. In London, tens of thousands turned up with next to no notice – blockading the entirety of Whitehall including the entrance to Downing Street – as Theresa May ploughed ahead with plans to invite Donald Trump to the United Kingdom on a state visit.

While world leaders often touch down in nations for meetings, events and summits, state visits take pomp and lavish welcomes to a whole new level. Greeted by members of the Royal family, guests are treated to the red carpet treatment – we’re talking golden carriages and soldiers parading and banquets fit for, well, the queen. Toasts are made, grand speeches are offered, gifts are exchanged in a way that signals mutual respect and understanding. No wonder those living in Britain were so alarmed that Bigot-in-Chief Trump was set receive one.

According to the Evening Standard today, the threat of further mass protests and anger has forced a change in approach from officials on both sides of the Atlantic, reporting the visit – now delayed until 2018 – will be a watered down ‘working visit’, not a celebration. It’s looking likely that such a visit will form part of a wider trip for the internationally disgraced President, and it’s evidence once again that direct action leads to results. Even House of Commons Speaker John Bercow was unhappy with the proposed plans, declaring that the President would not be allowed to address the House of Commons.

A Foreign and Commonwealth Office spokeswoman, however, told Huck that their position on the State Visit has not changed. “An offer has been extended and President Trump has accepted. Exact dates for President Trump to visit have not yet been arranged.”

Writing for Huck back in February this year, author and Guardian columnist Owen Jones explained why the movement to strop Trump was so significant. “Imagine what future generations will think,” he wrote. “They’ll flick through the history books – if the world hasn’t been consumed by nuclear armageddon by then, of course – and ask: at a time when a racist, sexist, war-mongering megalomaniac became the most powerful man on earth, what did people do? Did they organise, protest, confront Trump and the lethal proto-fascism that he represents? Or did they simply tut at the television set occasionally at some of Donald Trump’s more egregious policies and leave it at that?”

No doubt further protests will still go ahead should Trump touch down on British soil, but campaigners will rightly point to this as a victory for direct action and demanding accountability for the US President – even if our own Prime Minister sees no issue with holding his hand.

This story will be updated as information comes in.

Linkedin
OTHER ARTICLES
Campaigners reflect on what the supreme court’s decision to allow buffer zones in NI means for the future of reproductive rights in the UK.
Taking us through one of the most dynamic years in recent history, Laylah Amatullah Barrayn new photo book contains tender yet confrontational portraits.
A new film from Berghaus traces the story of Adam Raja, who left behind a turbulent upbringing to discover the healing power of climbing.
A new law change is enabling Britain’s donor-conceived children to know the truth about their origins – but campaigners say the fertility industry must do more to protect people.
A new podcast is opening up the conversation between trans women and trans amorous men in the hope of building coalitions.
A group of aid workers face prison for helping to save people fleeing their homes at sea. If they are charged, it will have a chilling effect on humanitarian efforts.