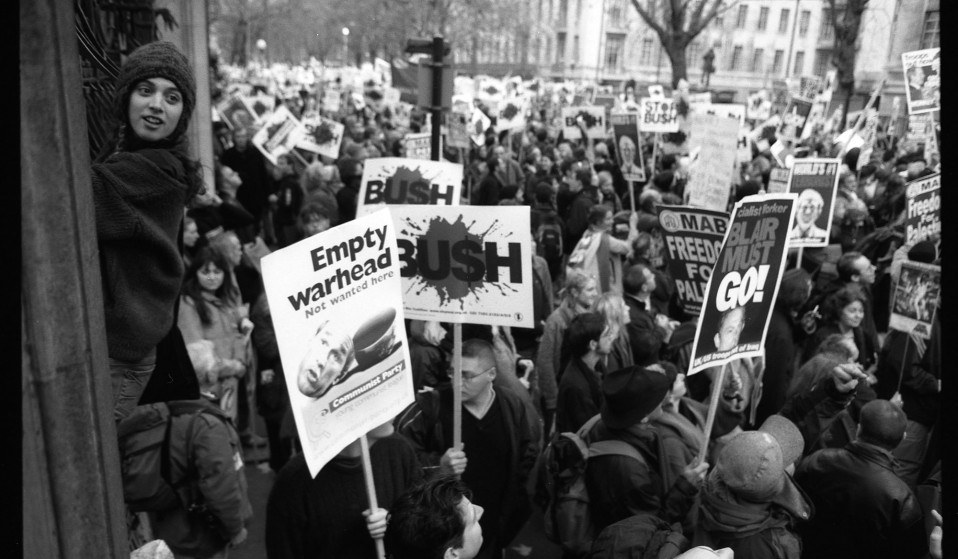 The failure to stop the Iraq war led to years of anger and apathy, but also helped a generation develop new tools to force political change.

When millions of British people failed to stop the disastrous invasion of Iraq in 2003, it led to years of anger and apathy. But those experiences weren’t wasted; they have gone on to shape a bright new generation, who developed tactics to create change when politicians refuse to adhere to the will of the people. But what became of those young protestors? Huck tracks down four activists who were mobilised as teens by the biggest anti-war demonstration in British history.

“This is it, they’re going to listen to us now, there are a million people here,” Shabina Raja remembers thinking when she took part in the London march against the Iraq war on February 15, 2003.

Yet the biggest protest in British history, alongside thousands of smaller actions around the country and co-ordinated protests in cities around the globe, wasn’t enough to stop the disastrous American-led invasion of Iraq in March that year. As the first political act for thousands of young people, the Iraq protests politicised a generation. The indifference of Bush and Blair to popular discontent caused years of apathy and disillusionment for many who took part, but that experience had a profound effect on their political development. Here four people who joined the protests as teenagers share their memories and reflect on how the experience shaped their political lives.

“Even thinking about it now, it just makes me smile because I remember being so excited and just so inspired,” Shabina reflects. Now 27, Shabina travelled from her home in Wolverhampton to meet her older brother, a student from Kings College London who took her to the protest. “When we got there it was absolutely amazing,” she says. “All these people, complete strangers coming together, just to make their voices heard, that sense of solidarity was just so empowering, especially for a fourteen-year-old. It just opened my eyes to something completely different.”

Like Shabina, James Butler, 30, remembers being in awe of the scale of the protests. “It was huge, it was vast,” he explains. “There was this mass of people everywhere you looked.” At 17, James met his friends at the Nelson Mandela statue on London’s South Bank and made his way into the march. He was struck by the diversity of the people who turned out. “It felt like something that had penetrated throughout society,” he remembers. “I passed such an enormous range of people, from pagan hippies with drums to old miners. So many people had spent time making home made protest signs and things, I think that’s one of the ways you tell the depth of feeling on something like this.”

Numbering between one and two million people, the London march took up the majority of media attention. But young people around the country also launched their own protests, like Rosie Huzzard, 29, who helped organise a student walkout in Sheffield. “I don’t know how we coordinated it across the city in the days before social media,” she remembers, “but we all knew we would walk out that day.” Rosie and her schoolmates congregated with a host of other students and activists to take over the city centre, before occupying the huge Park Way roundabout and shutting down all traffic on the M1 in and out of Sheffield, which has never been done since. 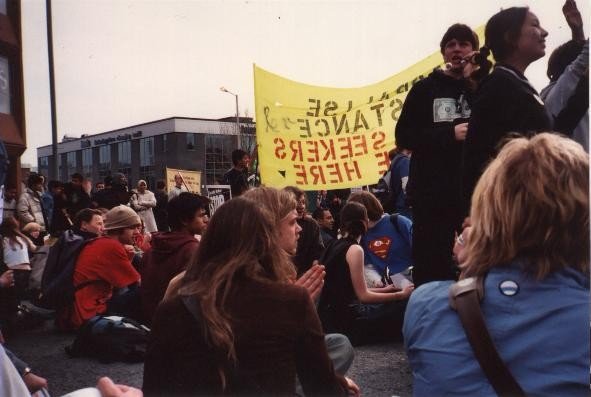 Just like today, young people in the early 2000’s were heavily criticised for their apathy and disengagement. But the Iraq war galvanised thousands of young people to take political action for the first time. Craig, 27, from Barnsley took part in a walkout in his school. He remembers the widespread feeling among his friends and classmates that the war was wrong and protest was the only option. “I was ready for it!” he says, enthusiastically. “I was so totally up for it. By 13, me and my friends were so well-versed in the arguments, taking political action felt necessary, because we really felt informed and politicised.”

But opposition to the Iraq invasion spread beyond those who identified as politically-conscious and reached incredibly young people. “There was a sense the protest was unavoidable,” James reflects. “Friends who have never been political got involved then because it was about war. They might not have known how they felt about large-scale political issues, but everyone knew that this war was a very, very bad idea.”

While Iraq mobilised millions, the movement’s failure to stop the war had a profound effect on how many young people involved came to see politics, and revealed the limits of democracy, very early on in their political lives. “I think we all felt a huge sense of betrayal,” James reflects. Like many others, the disillusionment at seeing the limits of people power caused him to disengage with politics for years, and he only became active once again following the collapse of Lehman Brothers and the onset of the financial crisis.

While the Iraq war protests have often been presented as a failure, in retrospect they’ve had far greater consequences than people at the time could have anticipated. Amir Amirani’s thought-provoking documentary We Are Many argues that the global activist networks created by opposition to the Iraq war led to a new wave of protests around the globe. The same people who came together in Cairo to oppose the war, for example, were the protagonists of the Tahrir Square protests, which helped ignite the Arab Spring uprisings across the Middle East. Elsewhere too, we can see the impact on protest tactics and strategies, such as Occupy and the Indignado’s decision to hold symbolic space, rather than relying on a one-off display of force.

“It was a radicalising moment, understanding that the whole country is against something, but seeing the total inability to force the government to act in the wishes of the people,” Craig explains. “It shaped our political identity and sent me on a different path. Rallies, petitions, writing to your MP or standing in the park, are about awareness, at best, distractions, at worst. I came to see the limits of a political strategy based on voting with your feet, and concluded that direct action is a more effective way of leveraging power – you’ve got to force people’s hands.”

Whatever the direction people took in their lives afterwards and the lessons they took from the movement’s failure, opposition to the Iraq war was the defining event in thousands of young people’s lives. “At that age, there wasn’t much about mainstream politics or activism that would have engaged me,” Rosie reflects. “But as a result of the Iraq protests, I have become an activist for the rest of my life. I am the person I am today because of what we did together to try to stop that war.”

Linkedin
RELATED ARTICLES
OTHER ARTICLES
A sharp increase in officers armed with the electrical weapon is resulting in serious injuries and deaths.
To mark the premiere of his new documentary on surfing giant Gerry Lopez, the filmmaker and former pro skateboarder sits down to share his unique brand of wisdom.
A series of photos by the late Jerry Dantzic taken in 1957 show a tender side to the iconic Jazz musician.
From the early originators to the female writers at the forefront of today’s scene, we talk to the artists redefining graffiti’s consciously macho origins.
Following the release of his latest album, the rapper talks about finding a new approach to songwriting, attitudes to poverty, and why his music is more than a political statement.
The author discusses her new memoir, which offers a sobering reflection on the racism and otherness she’s experienced along with a joyful celebration of her culinary heritage.