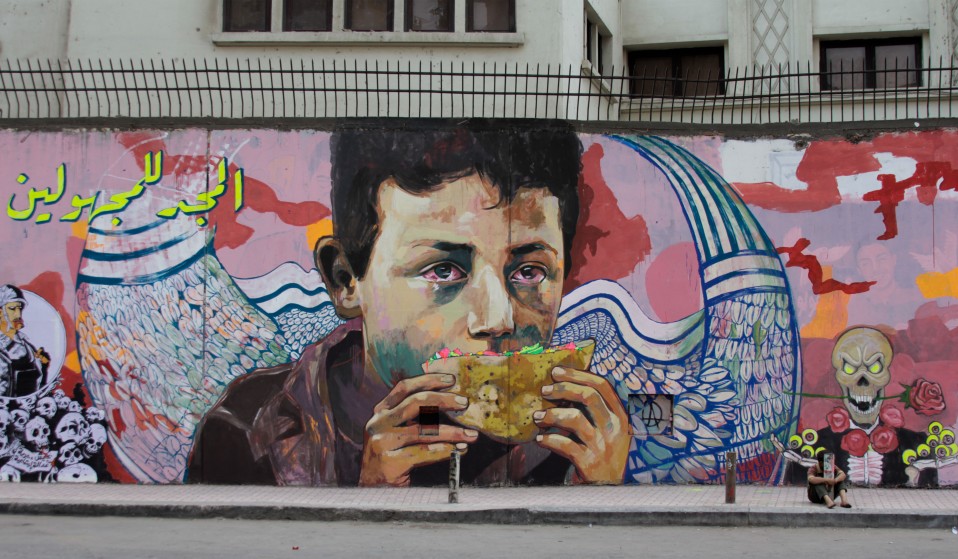 Egypt’s 2011 revolution filled the streets with colour, but now the new regime is stamping out creative resistance.

Egypt’s 2011 revolution filled the streets with colour, but now the new regime is stamping out creative resistance.

“I arrive in Tahrir Square at the exact moment a huge march, the biggest I had seen in my life up to that point, clashes with a deployment of riot police. The security forces are overwhelmed and retreat to the fringes of the square, which has now been taken over by the protest movement. Powerful chants erupt ‘Bread! Freedom! Social Justice!’ and ‘Down, down with Hosni Mubarak!’ There is a billboard in the centre of the square sporting a National Democratic Party advertisement, Mubarak’s ruling party. I climb the billboard and spray the words that people are chanting ‘Down with Hosni Mubarak!’ The crowd in the square erupts with cheers and whistles.”

This colourful snapshot is how Egyptian street artist Ganzeer responds when I ask about the role graffiti played in the 2011 revolution. He shares two similar moments when he was thrust into the flow of unfolding events as artists like him captured the popular imagination. Then he turns the question back on me: “So, did street art play a role? I leave the conclusion up to you.”

As people all over the world tried to interpret the motiva- tions and demands of the crowd that occupied Tahrir Square, the flowering of politically engaged graffiti came as a tangible statement of intent. And that statement was everywhere. At a time when nobody could trust the official media narrative of events, the walls became spaces where ideas and debates within the revolution played themselves out in a cacophony of colours and voices.

The Cairo-born, Berlin-based graphic designer and activist Caram Kapp feels graffiti played an important role within Egypt itself, but also connected the outside world with their internal struggle. “The walls serve as an immediate memory of the last three years,” he says. “Street art served as an easily shareable site for opinions within Egypt, but its visual nature allowed it to become an understandable source of information for those following events outside the country. It created symbols that were used in human rights campaigns and gave the cause a continuing relevance.”

Over eighteen momentous days, protestors occupied one of Cairo’s main road junctions and stood their ground against attacks by security forces until Hosni Mubarak

finally stepped down. This was a time when Egyptians forgot their ethnic, religious and social differences to come together as one, demanding social justice for all. Graffiti was just one of the many forms of expression released as ordinary people found their voices. After years of enforced silence, they rushed to express themselves in political debate, via social media and on the walls of towns and cities all over Egypt.

Although he rejects the activist label, Ganzeer played a huge role in encouraging the use of street art as a revolutionary tool. In January 2012, when it appeared that the military council who governed Egypt after Mubarak’s downfall was resisting protestors’ demands, Ganzeer launched Mad Graffiti Week with this declaration: “Our only hope right now is to destroy the military council using the weapon of art. From January 13 to 25, the streets of Egypt will see an explosion of anti-military street art. If you are a street artist elsewhere in the world, please do what you can in your city to help us.” His call was answered in spectacular fashion, but the ensuing graffiti mobilisation was just one of many efforts that eventually helped to achieve official elections later in the year.

Ganzeer was one of several artists who rose to prominence and became recognised internationally, but all Egyptians who wrote, stencilled on walls, defaced propaganda posters or wrote on army tanks with permanent markers played a role in the revolution by making their voices heard. Basma Hamdy, co-author of revolutionary street art anthology Walls of Freedom, says graffiti provided some of the most important social commentary. “Street art raised awareness,” she says. “It asked difficult questions and exposed truths, becoming a key tool for empowering citizens. The insistence by artists to remain in the street for days and months on end to communicate their message is what I found remarkable.”

Caram Kapp looks back on that period with considerable nostalgia. “Tahrir had the carnivalesque atmosphere of a people who were in revolt and enjoying it,” Caram wrote afterwards. “There was freedom of speech and assembly, camaraderie and food. After thirty years of leaving the rest of Egypt outside as soon as they entered their flats, people came together in this place to celebrate values and rights they barely even remembered under Mubarak’s dictatorship.”

But three years later, the revolutionary movement that toppled one of the Middle East’s longest-serving dictators seems to have ground to a halt. Mohammed Morsi of the Muslim Brotherhood became Egypt’s first democratically elected president in 2012, only to succeed in alienating growing numbers of Egyptians through actions that were perceived as autocratic and a betrayal of the democratic ideals of the revolution. After more street demonstrations, Morsi was deposed in a military coup led by General Sisi in July 2013. Today, the public euphoria that erupted in Tahrir Square is absent and the military are back in power; as this magazine goes to press, the interim government has resigned. No one is quite sure what to make of the current situation but many are asking if anything has been achieved.

Basma Hamdy explains that Egypt is currently going through a dark period. The military have killed hundreds of Brotherhood supporters and in November 2013 introduced an anti-protest law, imposed curfews and drafted an anti- graffiti law. “It is a gradual but consistent repression that will probably get worse,” she says. “I just heard of a man arrested for holding up a sign that was questioning what the coup achieved. It wasn’t even referencing the military but was a general, philosophical question. Many activists are still locked up and there are those who equate any criticism of the military with an affiliation to the Brotherhood. People have become intolerant toward the revolution claiming that activists have alienated the majority of Egyptians by refusing to compromise and clinging to unrealistic and overly idealistic goals.”

So what became of the unity that Caram Kapp once witnessed in awe? Today he is pessimistic. “The love that permeated Tahrir for those eighteen days – this united standing behind a cause – started fading soon after the ousting of Mubarak,” he explains. “There remains a strong emotional bond between individuals involved in various stages of the uprising, but the love quickly gave way to the various interests of political parties and individual factions. When the people took to the streets they never thought they were unleashing a political process, and they were apparently not quite ready for that outcome.”

The process set in motion by the revolution has been complex and the future for Egypt is unknown. But when I ask Ganzeer how he feels about the current situation, he is surprisingly upbeat. “Buddy, the revolution is far from over,” he says. “Ever since it took off in 2011, we’ve been going through a series of ups and downs. Right now, at this particular moment you ask me this question, we’re experiencing one hell of a major down. But the struggle against the military will continue, because it is their grip over the nation that frustrates the goals of the people: ‘Bread! Freedom! Social Justice!’ The revolution will continue until those three things are achieved.”

The people interviewed in this article contributed to Walls of Freedom, a collaborative book project that tells the story of Egyptian revolutionary street art, published by From Here to Fame, out March 2014.

This article originally appeared in Huck 43 – Street Photography with Boogie.

Linkedin
RELATED ARTICLES
OTHER ARTICLES
Thomas Hoepker‘s images taken during a road trip across America provide a searing social commentary about a divided country.
Photographer David Hoffman recalls documenting the extreme wealth inequality around Tower Hamlets and Hackney int the 1980s.
The last few years have seen an increase in LGBTQ-led initiatives to feed the hungry, with many finding ways to stay afloat despite the challenges.
Proposals to introduce a minimum GCSE threshold for student loans will disproportionately affect those from marginalised backgrounds.
Finland-born photographer Sirkka-Liisa Konttinen looks back on her decades-long documentation of life in Northern England.
Yesterday queer activist group Lesbians and Gays support the Migrants staged a die-in at the Pride in London parade to protest the inclusion of police in the march reports Huck politics editor Ben Smoke.