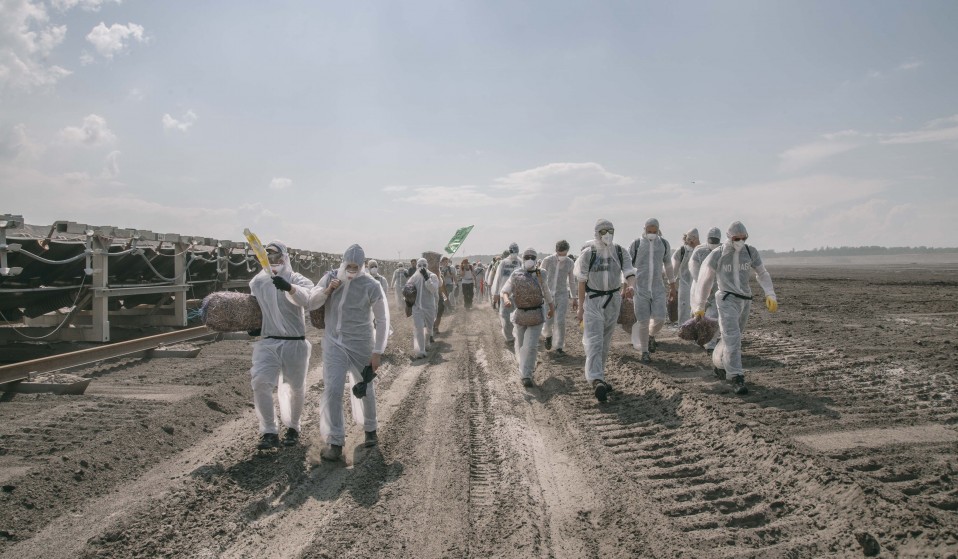 As perpetrators of climate chaos collude across borders, a new wave of activists are forming their own international web. They’re reclaiming our right to self-determination – before it’s too late to act.

Climate change is the greatest threat facing our planet – and it doesn’t give a damn where you live. As perpetrators of climate chaos collude across borders, a new wave of activists are forming their own international web. They’re reclaiming our right to self-determination – before it’s too late to act.

There’s something eerily beautiful about a coal mine in the evening. The vast expanse, the giant machinery, the haze of smoke and dust that floats above a golden, man-made desert. Beneath the surface, though, something dark is stirring.

It’s the evening before Ende Gelände, Europe’s biggest climate action for a generation. Just under 150 kilometres south of Berlin, the German village of Proschim is a hive of activity. Activists from all across Europe are descending on this sleepy hamlet with a singular goal: to shut down a coal mine that, as one of the continent’s greatest polluters, spits out an average of three million tons of CO2 per year. 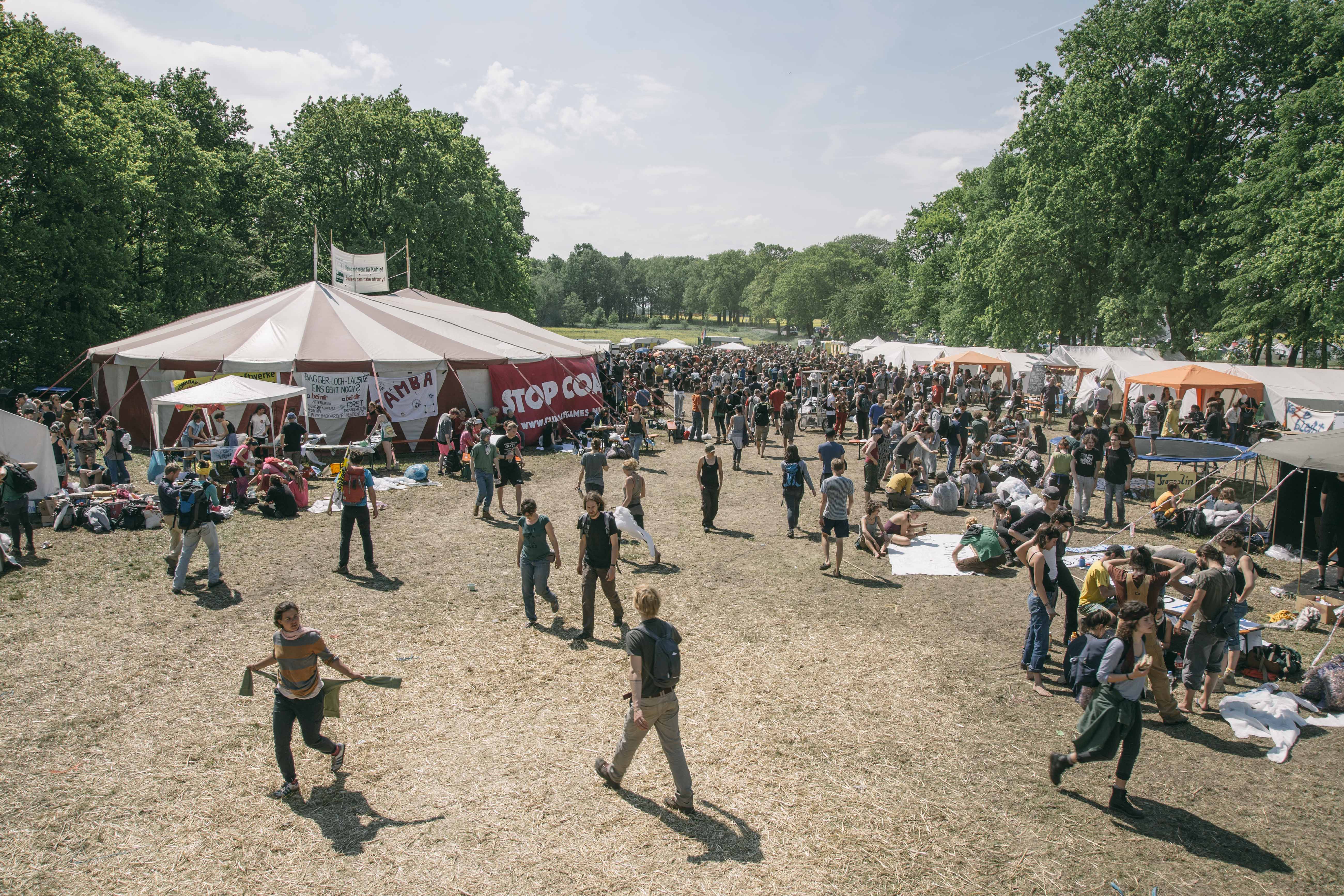 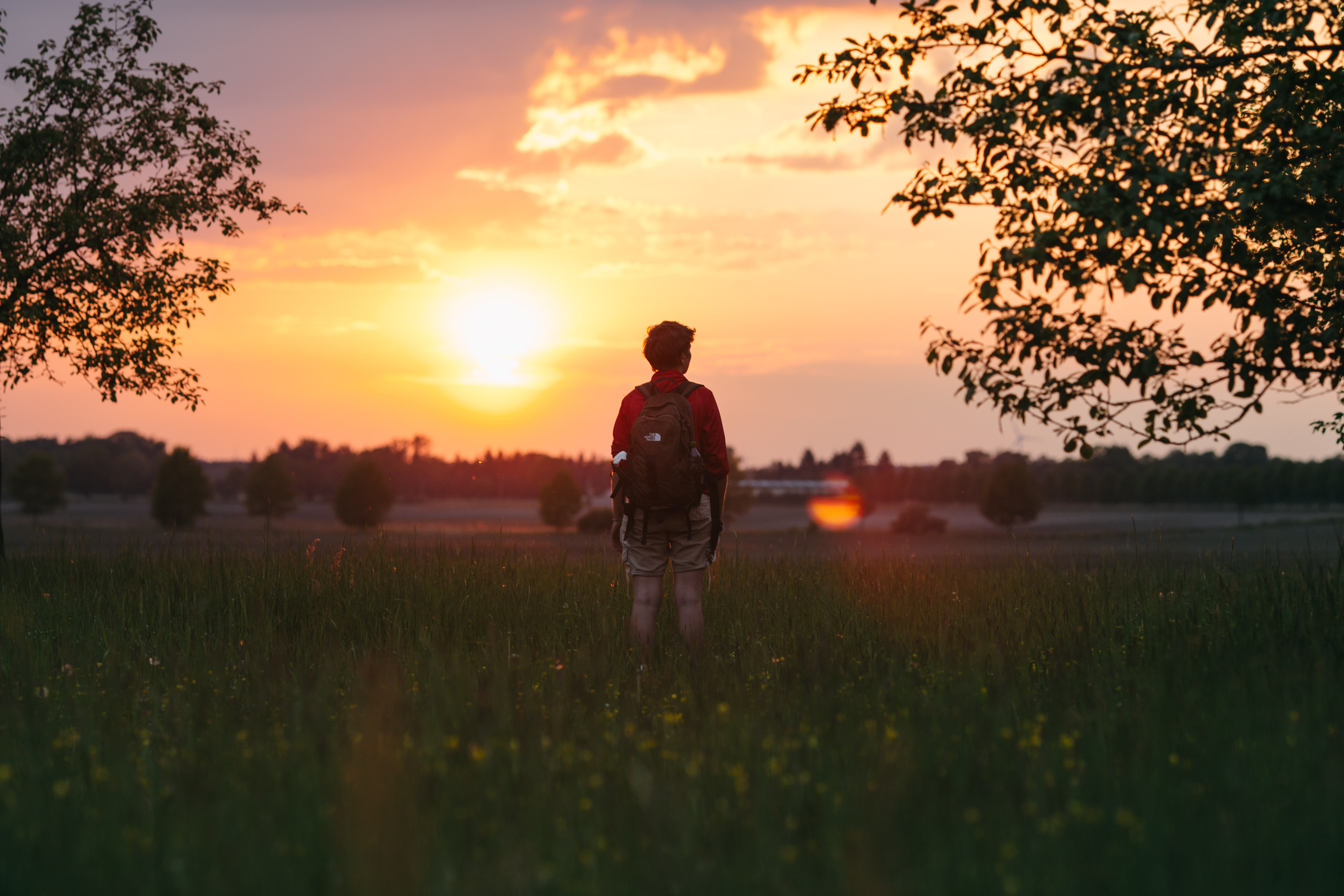 “I just think about the future, when I’m sat down one day with my children,” says Bethan Lloyd, a 29-year- old musician from North Wales, now living in Berlin. “I imagine them asking me, ‘Mum, what did you do about all this?’ And I can’t face the idea of telling them that I sat down quietly and did nothing.”

Bethan’s anxieties – triggered by “all this” – may sound undefined, but the impending climate armageddon facing our planet is an all-too real threat. It’s a question we should probably be asking ourselves more often. When it comes to climate change, the facts are overwhelming: temperatures are rising, the Arctic is melting and sea levels rose by 19 cm in the 20th century. 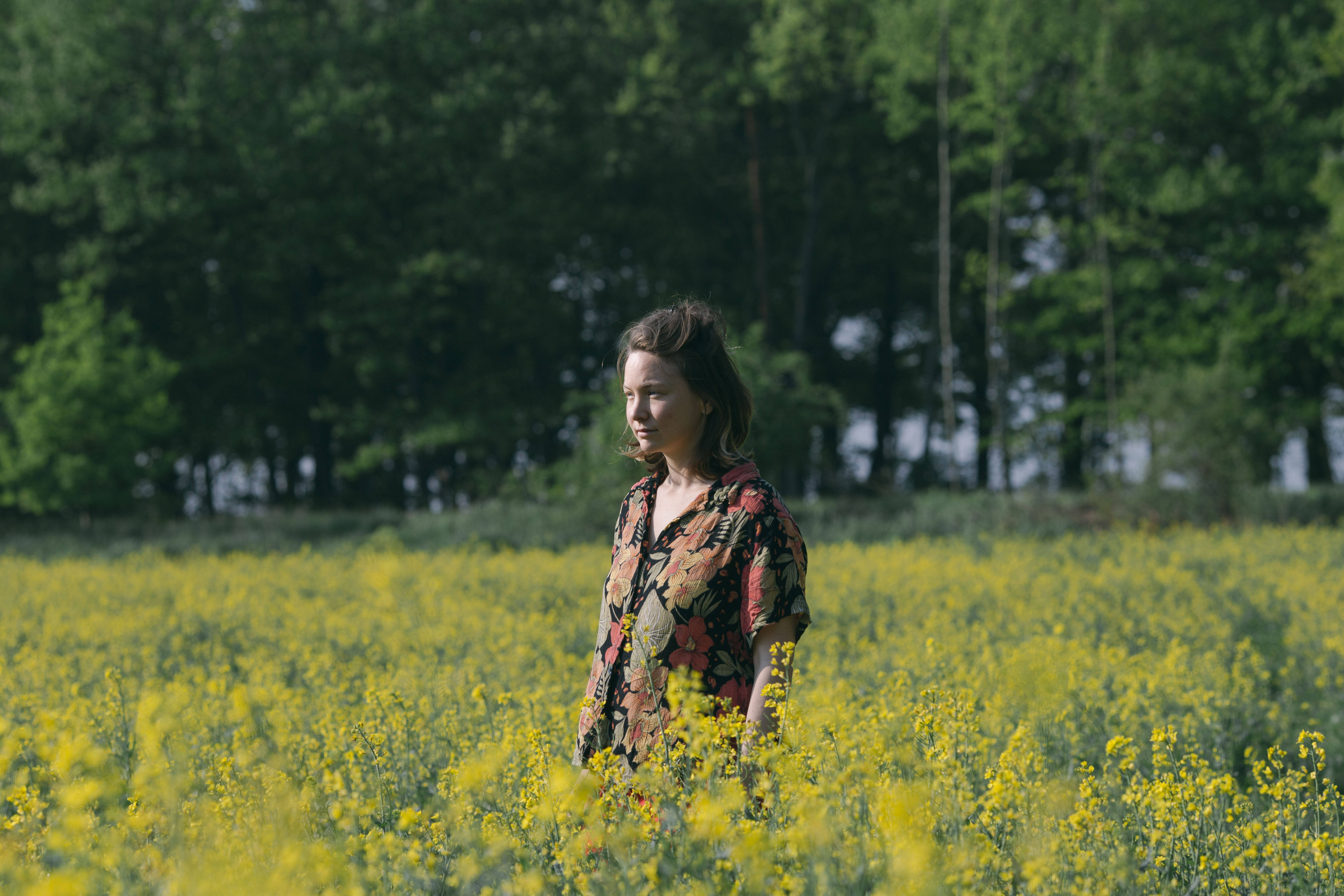 The United Nations has predicted rising temperatures will see 250 million displaced by 2050. And yet most of us sit idly by, occasionally tweeting or signing a petition online.

There is, however, a rapidly growing movement of people who refuse to be passive activists; people willing to put their bodies on the line to take the fight against climate change to its very heart. And on this sunny weekend in late May, nearly 3,000 of them are coming together to amplify their collective voice.

Inside the Ende Gelände camp site, however, the battleground for global survival is surprisingly idyllic. Set back from the winding country road is a tent-lined lake, fields on either side brimming with gazebos, coaches and people. A field kitchen churns out free vegan food for the masses, a sweaty baking tent next door produces loaves day and night. Running down the edges of the site’s central field are smaller structures: a meeting space, a press room, technology hubs and a legal-briefing area to name a few.

Children bounce on a trampoline, while a big-top tent hosts a packed-out rota of screenings, discussions and talks. It’s a festival atmosphere full of conversation and buzz. I make my way towards a row of tables filled with people, and take a seat with two young women who later tell me they first met at a climate protest in France just months before. 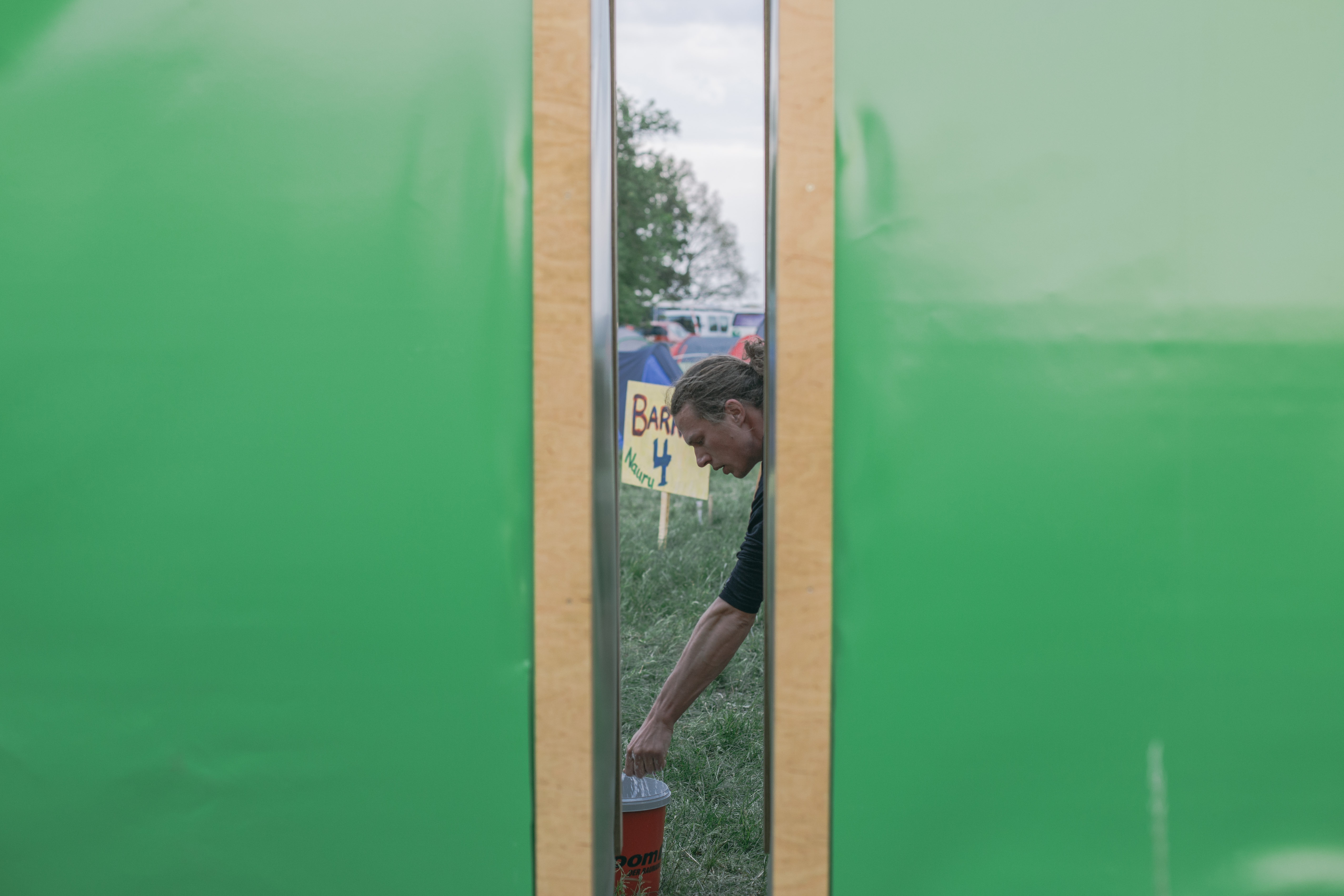 In December 2015, world leaders met in Paris for COP21, an international climate summit tasked with halting global warming. Despite the rhetoric and the headlines, the talks were an abject failure: the agreement isn’t legally binding, the goals have been labelled insufficient and the proposals won’t come into effect until 2020 at best.

“The reality is we went in not expecting anything meaningful to happen,” suggests Melanie Mattauch, as we sit looking out over the campsite after dark. Melanie works in Germany for 350.org, an international NGO determined to mobilise the masses to tackle climate change across the globe. 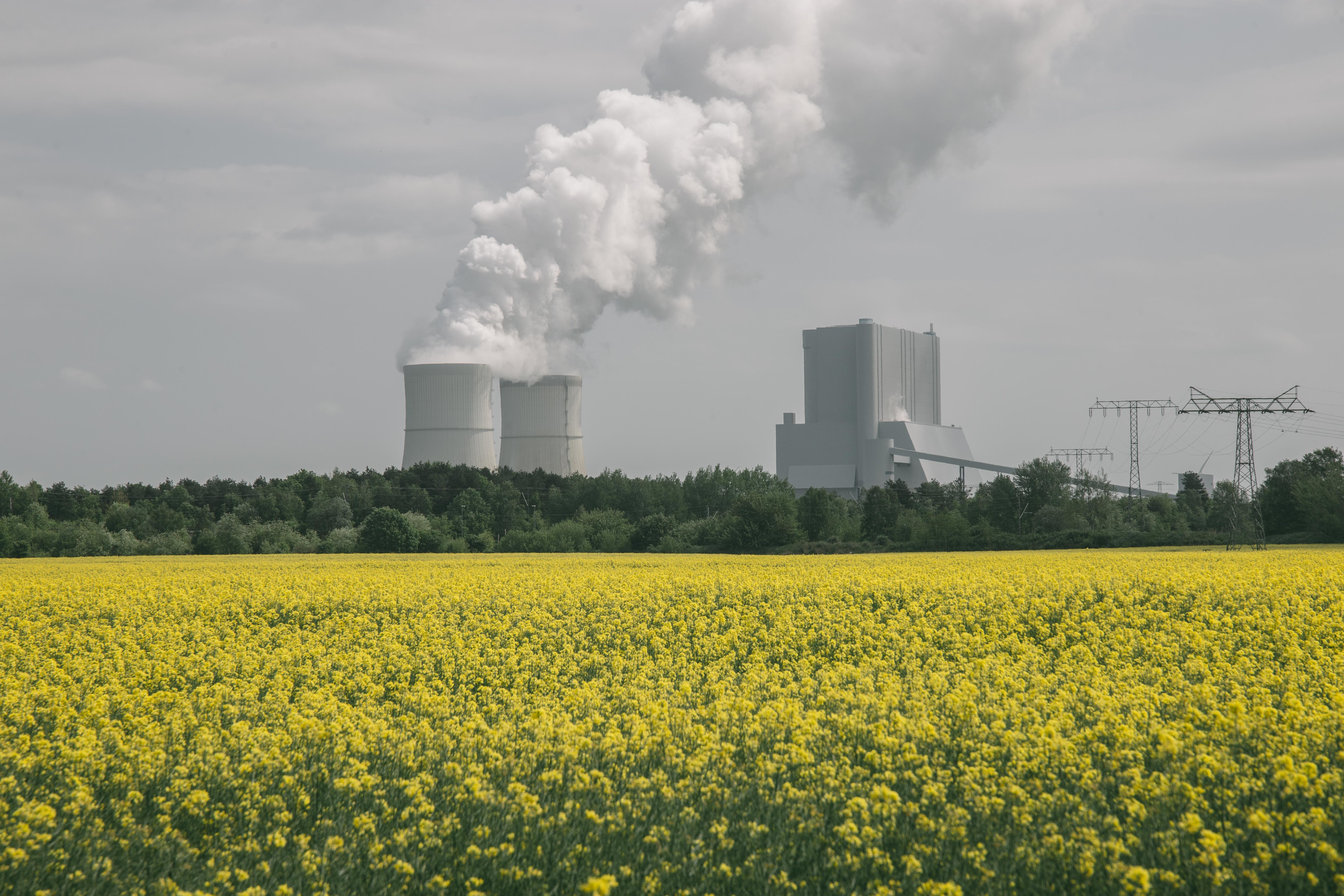 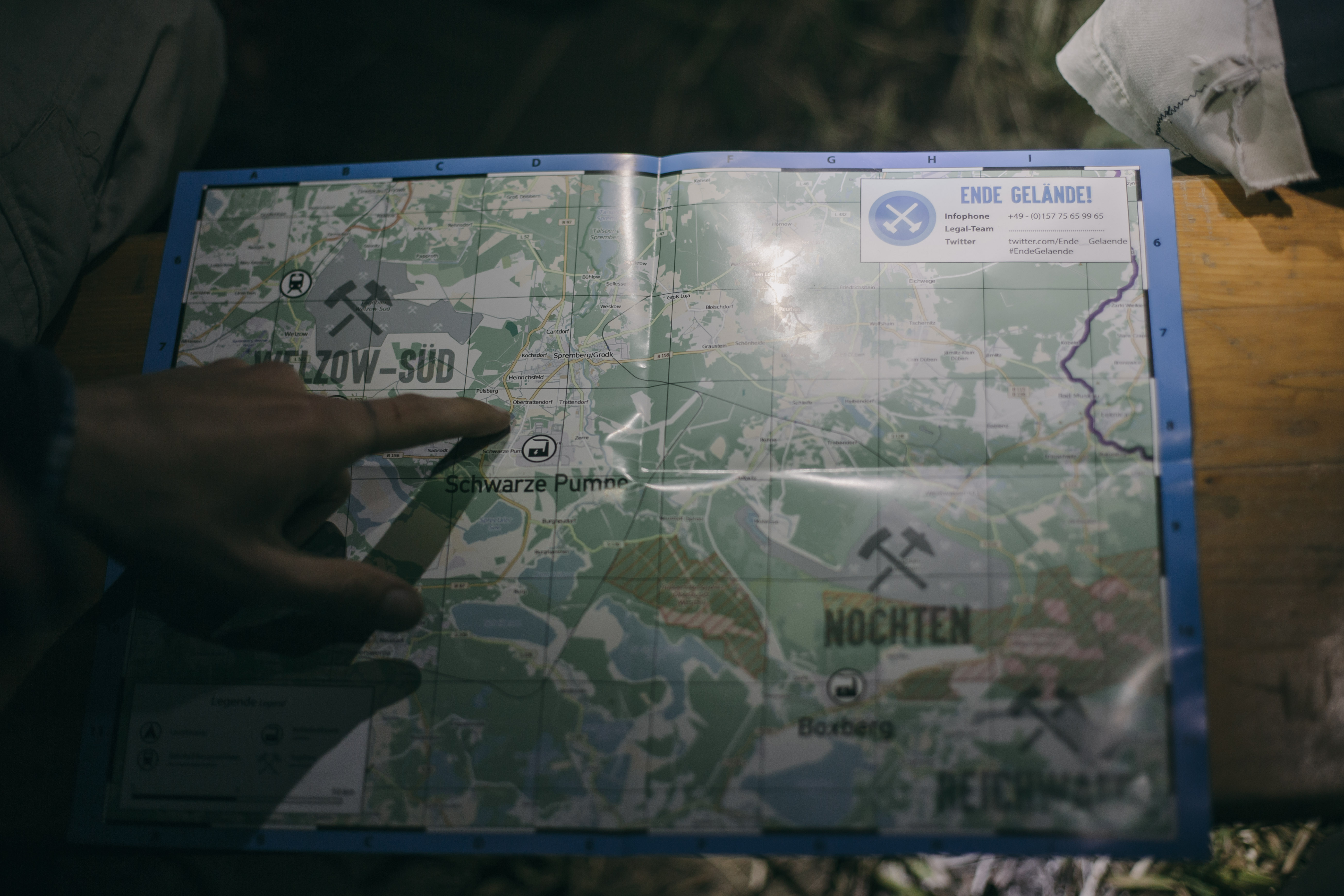 In Paris, while diplomats, bureaucrats and lobbyists sat sprouting hot air, environmental campaigners tirelessly networked and took matters into their own hands. “What we wanted from Paris was for the movement to gather strength,” says Melanie, optimistically. “And it happened.”

The internationalisation of climate activism isn’t just an opportunity to make friends – it’s a tactical necessity. For generations, social justice struggles were fought within national borders. The Suffragettes fought long and hard for the right for women to vote in the UK; the civil rights movement forced change across the USA.

Throughout history, international solidarity has often proven helpful – just look at the boycott campaigns against Apartheid South Africa – but more often than not the target for malcontent has been a state actor or institution. In a globalised world, this is changing. 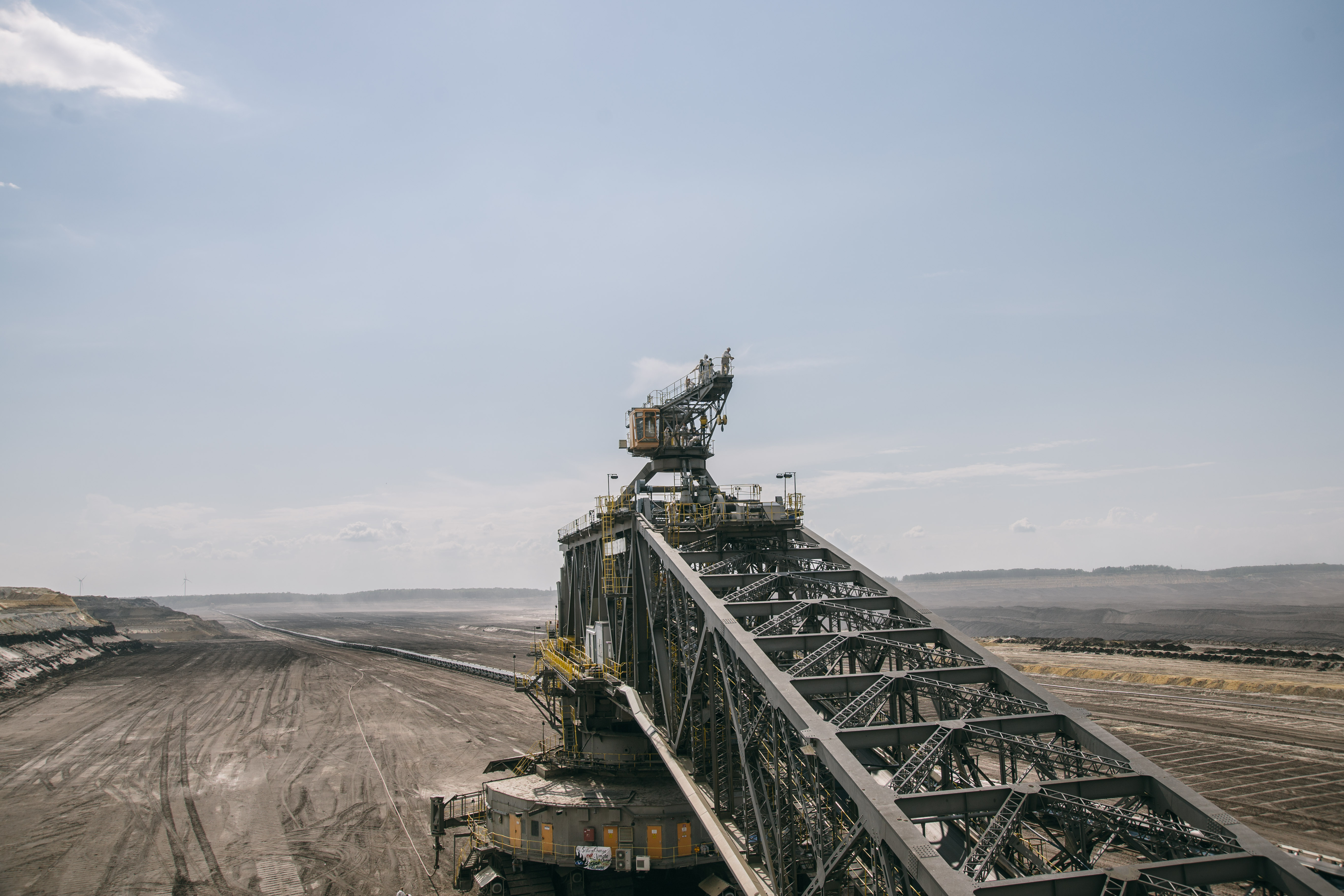 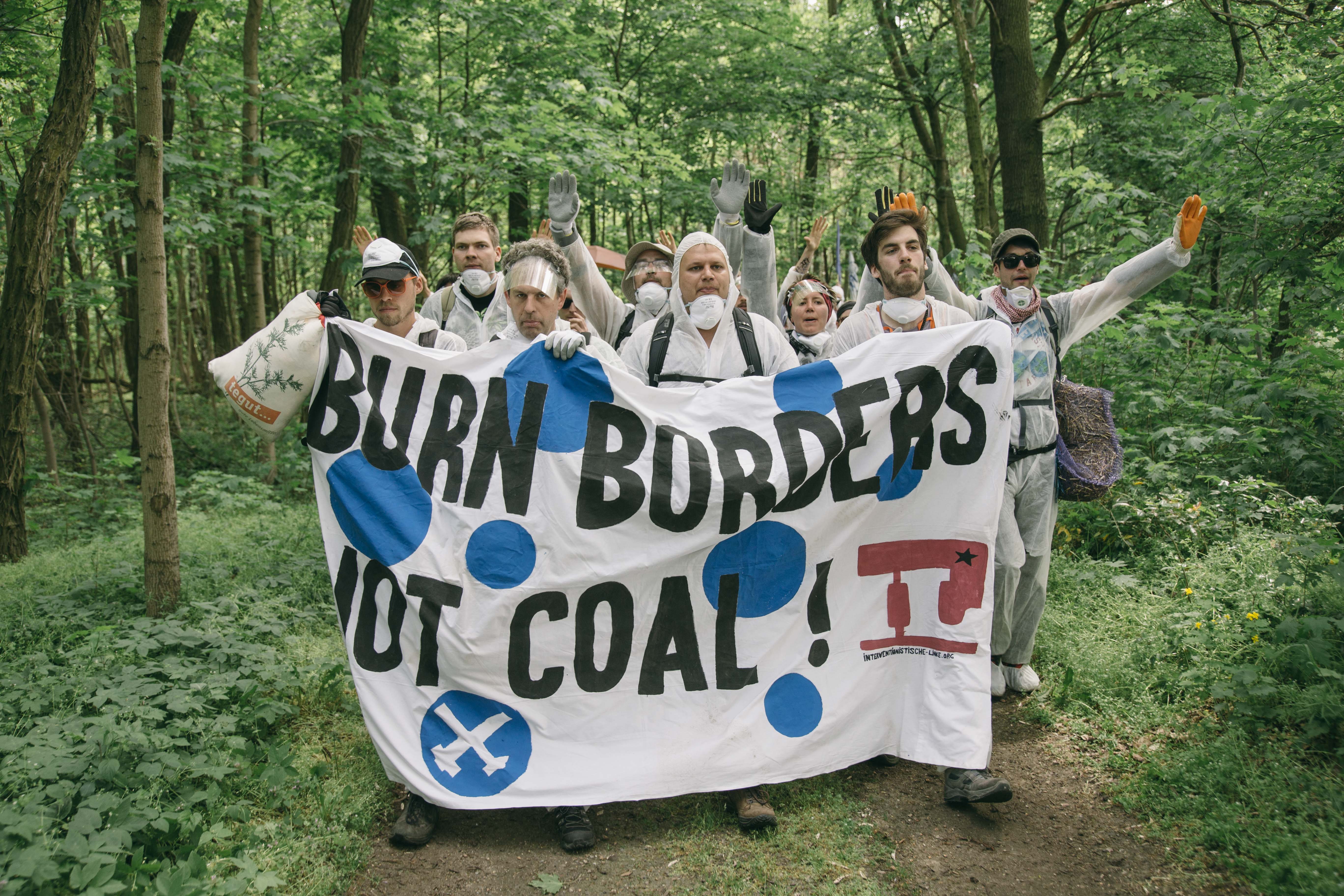 Take the mine where we’re sitting today: barely visible in the distance as the stars shine brightly above. Vattenfall, who owns and operates the coal mine, is one of the largest energy corporations in Germany. In the Lusatia region, which surrounds us today, it’s hoping to cut ties with the coal mines and plants. But instead of ceasing operation they’ll simply sell them on, much to the frustration of anyone fighting for a more sustainable future.

Vattenfall is owned exclusively by the Swedish government, but its newfound buyers are a Czech corporation, EPH. A complex international web is forming, and that’s before we look to the transnational treaties and organisations that serve to regulate the sector, the multinational corporations with secretive tax-havens as their base.

“Climate change is a global issue,” explains Melanie, “It takes a global movement to address it.”

The sun beats down on our temporary community the next morning. It’s only 6am but there is a palpable buzz across the site. A large, open field plays host to “action training” – groups of protesters run into fake lines of police officers, learning how to protect themselves from batons and pepper spray, how to withhold their identities if and when they get apprehended. For many, this isn’t the first time skills like these have been put to good use.

In 2015 a similar protest took place in the Rhineland, West Germany, targeting Europe’s largest open-cast coal mine. The police response was heavy-handed and brutal: mass arrests and bloody beatings leaving physical and emotional scars. Images and videos of the violence spread like wildfire. Thanks to the power of social media and citizen journalism, millions were able to see the horror of what occurred.

Rather than putting people off, numbers this year are bigger: over 33,000 people took part in 20 escalated direct actions across six continents under the banner of Break Free. As perpetrators of climate chaos continue to collude across borders, activists are making use of the technology and tools that come with a globalised world. Hoards of people grab packets containing dust masks, visors and overalls; the numbers having swelled with arrivals overnight. Flares are lit, the coloured groups split, and we’re off.

As we walk through the heat of the afternoon sunshine, weaving through a sandy beaten track, I find myself talking to Danni Paffard, a British activist involved in climate activism for some time. “As a political issue, it’s clear we need an international response,” says Danni, as the rhythm of samba pounds through the forest. “This provides us with an opportunity to expose ourselves to different organising cultures too. It helps us to innovate, to build on the social movements that came before us.”

For campaigners like Danni, working alongside international contemporaries isn’t just a tactical necessity, it’s an opportunity to learn, develop and share. After meeting in Paris, some Dutch campaigners joined a British action in Wales that Danni had built on tactics she’d seen at Ende Gelände the previous year. “It’s a cross-pollination of ideas, and it’s exciting.” 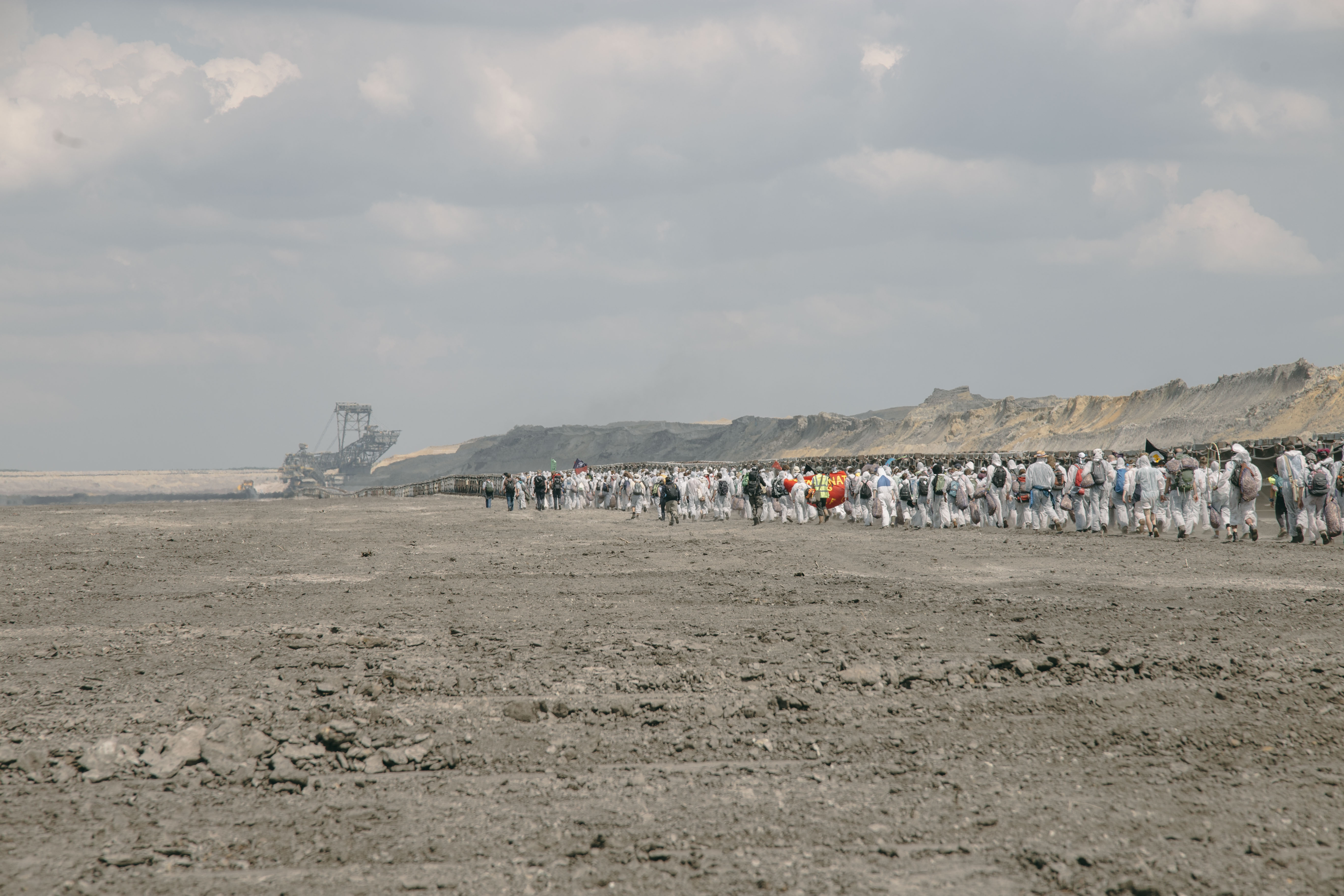 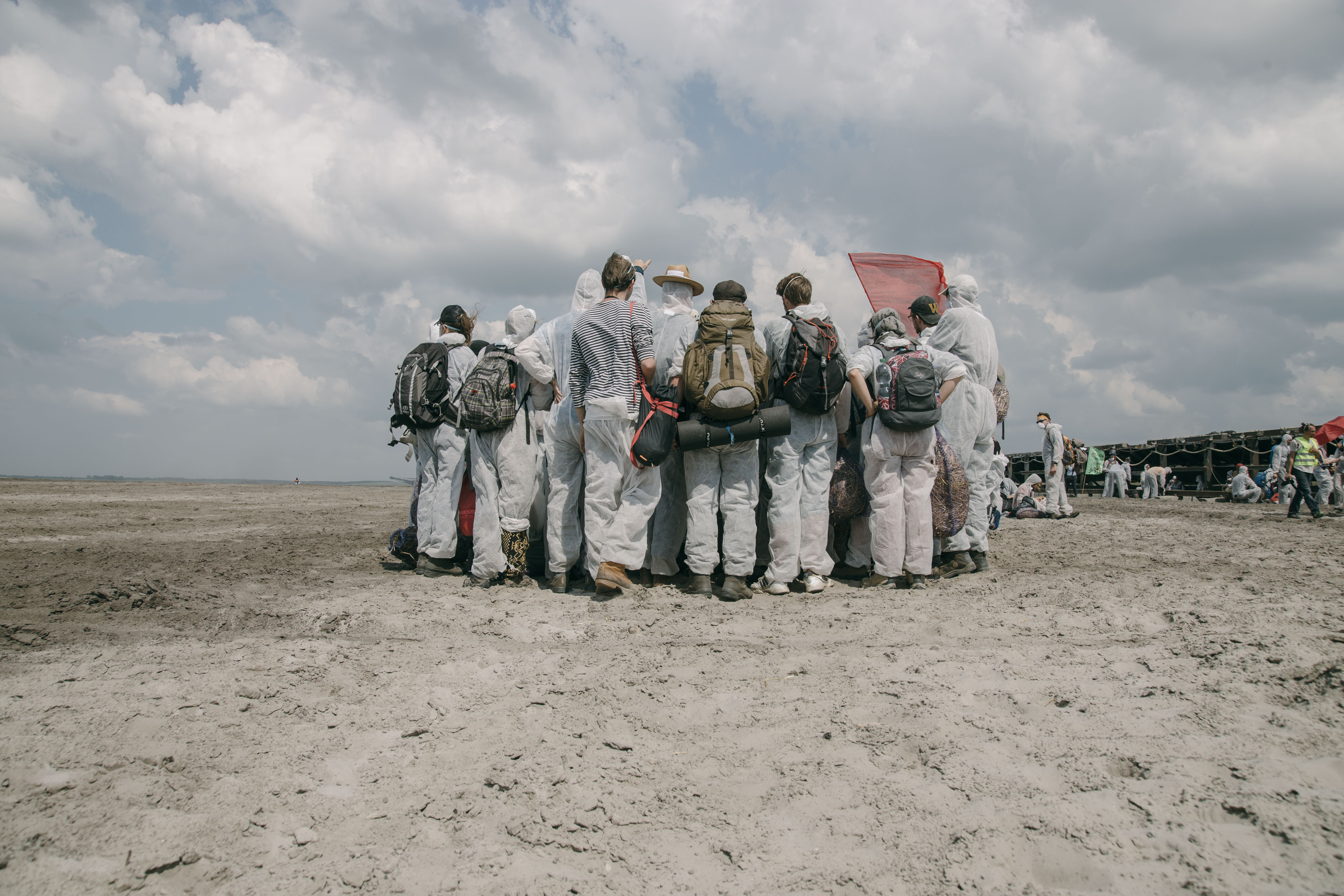 After hours of walking, we emerge from the woods. The coal mine that’s been forced out of operation sits ahead. For the next few hours, as the different groups speed across the site, the police hang back – overwhelmed by the numbers and concerned about the bad publicity from previous years. Train tracks transporting coal from the mine to the power plant are blockaded; the giant equipment is scaled and locked down. It’s a sight to behold.

A criticism often levelled at our generation is that we’re lazy, self-interested, determined to live out our lives online. Sat on a digger looking down on the thousands of activists below, I can’t help but feel that’s not quite true.

Measuring the impact of an action like this is impossible; a calculation nobody is really able to complete. Sure, there’s a real-time material impact on the planet – the coal mine was shut down for a matter of days and coal extraction was halted for a time. But in and of itself that’s unlikely to do anything – as everyone here will readily admit. 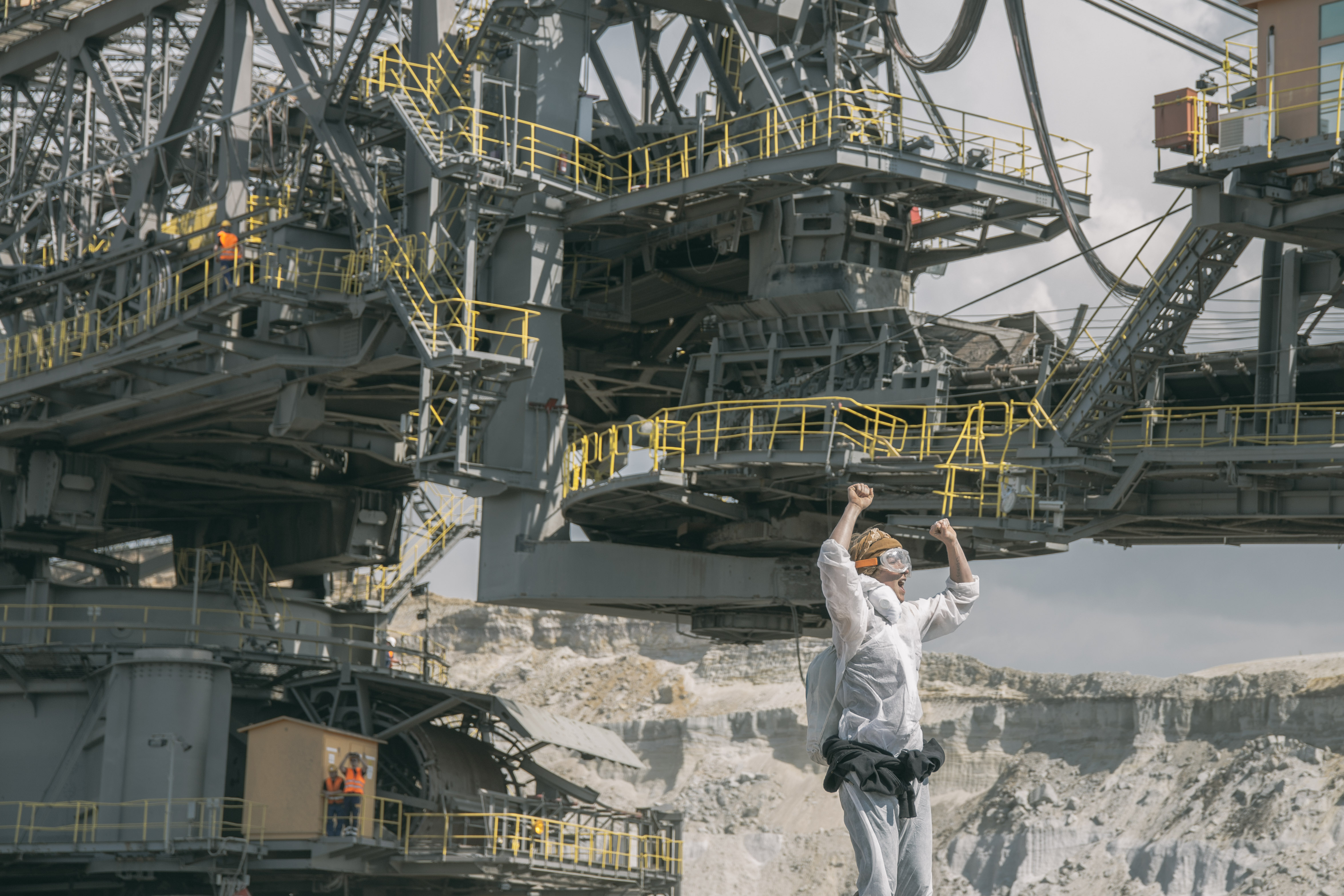 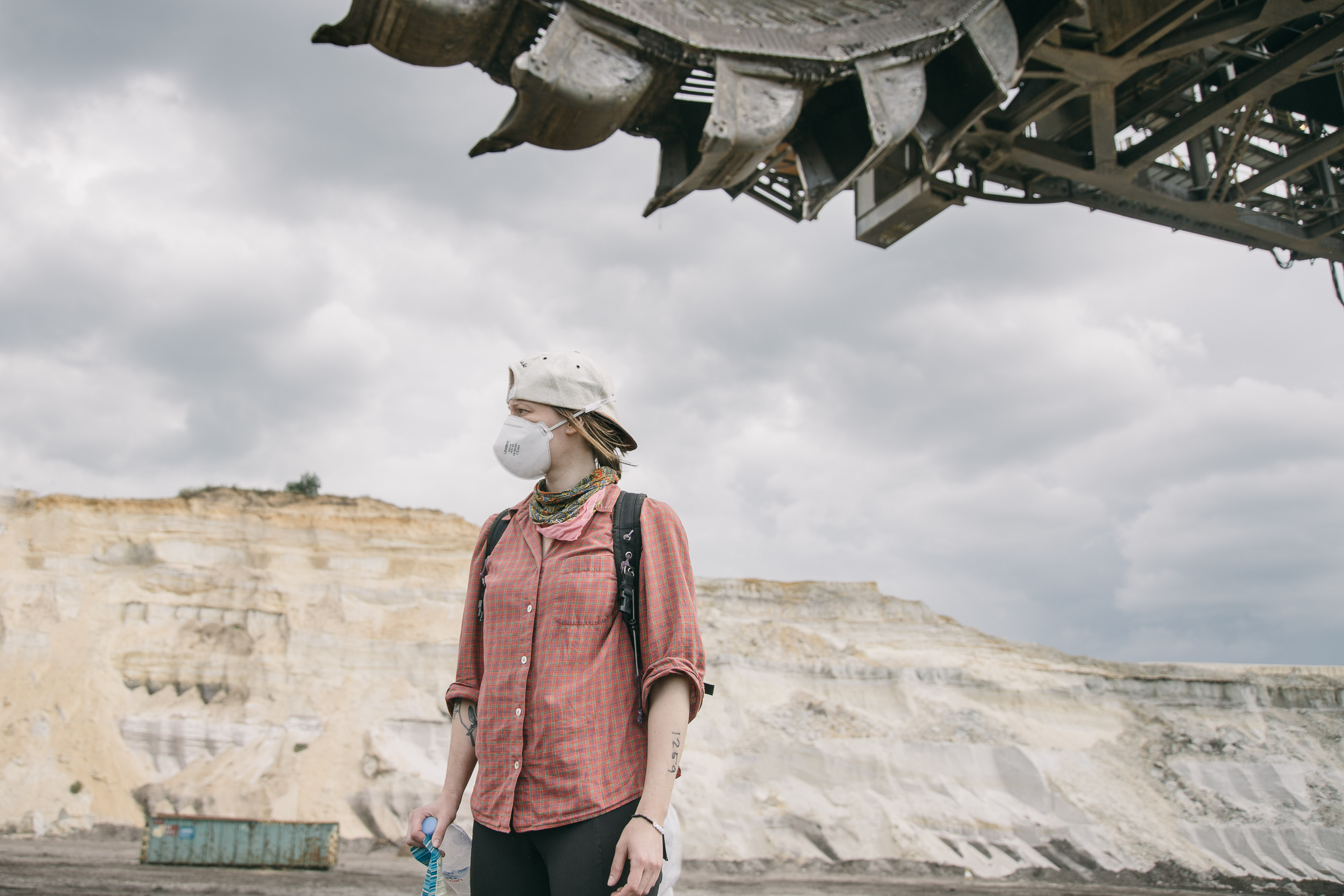 But it’s what this action represents that truly counts. It’s the coming together of people from all over Europe to stand up for a cause we all believe in. It’s utilising the power of the internet and social media to spread a message, to plan together, to turn virtual frustration into boots on the ground. It’s harnessing a world that’s getting smaller and demanding we protect it no matter what. It’s standing up to fossil fuel multinationals, to national governments, to those in power with so much to lose.

If all we do is like and share, then maybe it doesn’t mean much. But if we stand up and we follow, then the potential to shape our future is huge. 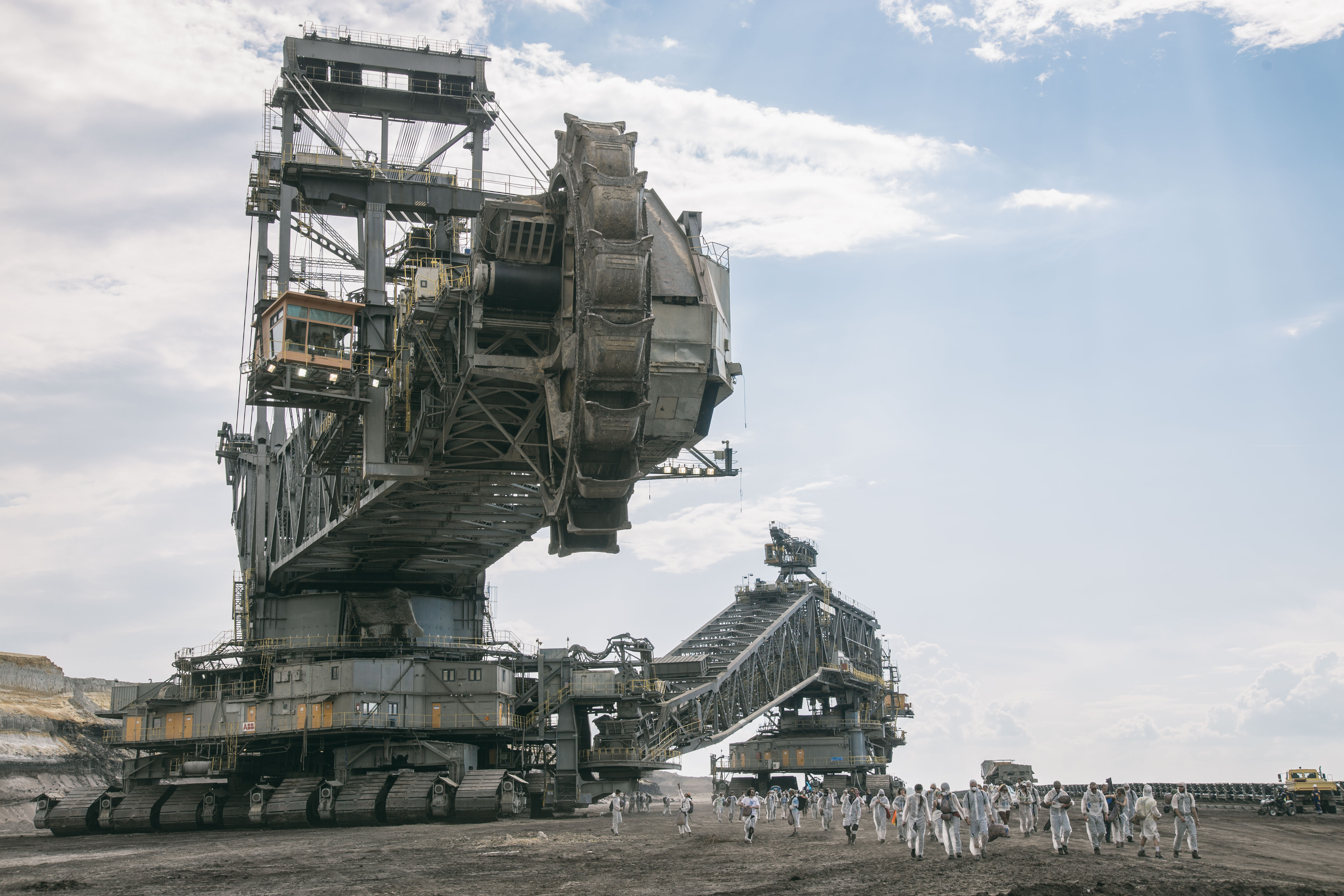 “You can share things online, you can speak to people in person, but I don’t want to have these endless conversations and not do anything,” reflects Bethan, bedding down for the night’s occupation. “I wasn’t in denial about climate change but I think I denied to myself that I could do something – it felt much easier that way. Now I see that by coming together as individuals we can do something. It won’t be easy, but we will be better prepared.”

Linkedin
RELATED ARTICLES
OTHER ARTICLES
Steel City is often overlooked when it comes to the country's cultural radar despite its role in shaping electronic music.
With the virus now a global health emergency, we must take steps to fight misinformation and demand a swift UK-wide vaccine roll out, writes Phil Samba.
Photographer Bud Glick recounts documenting everyday life in the area, and what it taught him about the Chinese immigrant experience.
After rewriting the indie rulebook with her devastating songs about romantic longing, the singer-songwriter is now imagining a future in which the artist is no longer a product.
Following the release of his latest album, the rapper talks about finding a new approach to songwriting, attitudes to poverty, and why his music is more than a political statement.
A series of photos by the late Jerry Dantzic taken in 1957 show a tender side to the iconic Jazz musician.