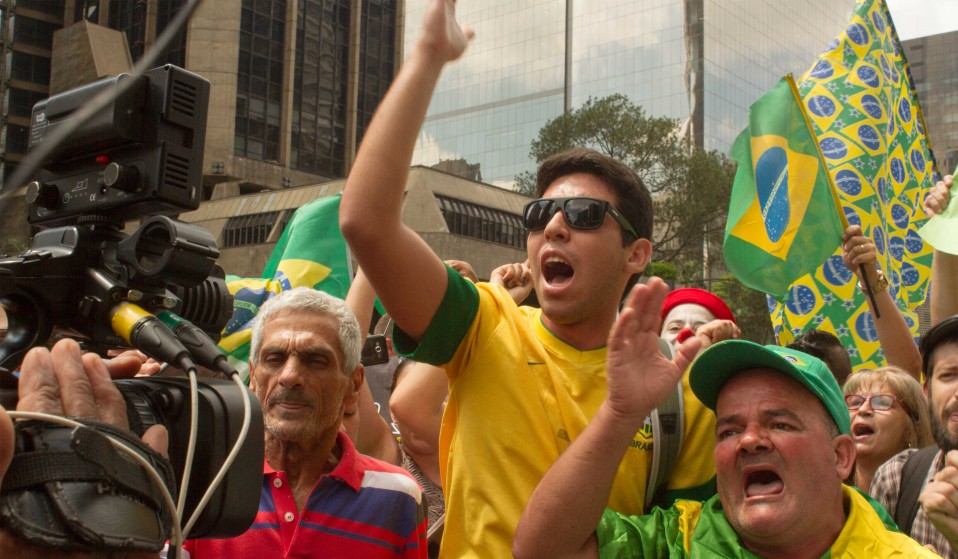 Huck reports from the ground in São Paulo, where right-wing protestors spent the night on the streets calling for the end of Brazil’s most progressive government in history.

Huck reports from the ground in São Paulo, where right-wing protestors spent the night on the streets calling for president Dilma Rousseff, who heads Brazil’s most progressive government in history, to step down.

The noise on São Paulo’s main avenue, Avenida Paulista, is deafening. From a distance, the mass of flags, Brazil jerseys and the thundering wall of noise – the horns, whistles and rowdy chanting – might easily be mistaken for a football match. But moving closer it becomes possible to make out the slogans, “Fora Dilma (Dilma out)” and “Lula vai para a prisão (Lula go to prison)”.

The overwhelming whiteness of the protestors stands out too in the famously diverse nation of Brazil. The people with dark skin are the ones passing through the crowd, selling water, beer, whistles and Brazilian flags, not partaking in the chanting. “The majority of people here are the highest classes, they are the majority.” explains Gustavo, 21, a business student. “We’re in the heart of the commercial district, so people that work here joined the protest.” 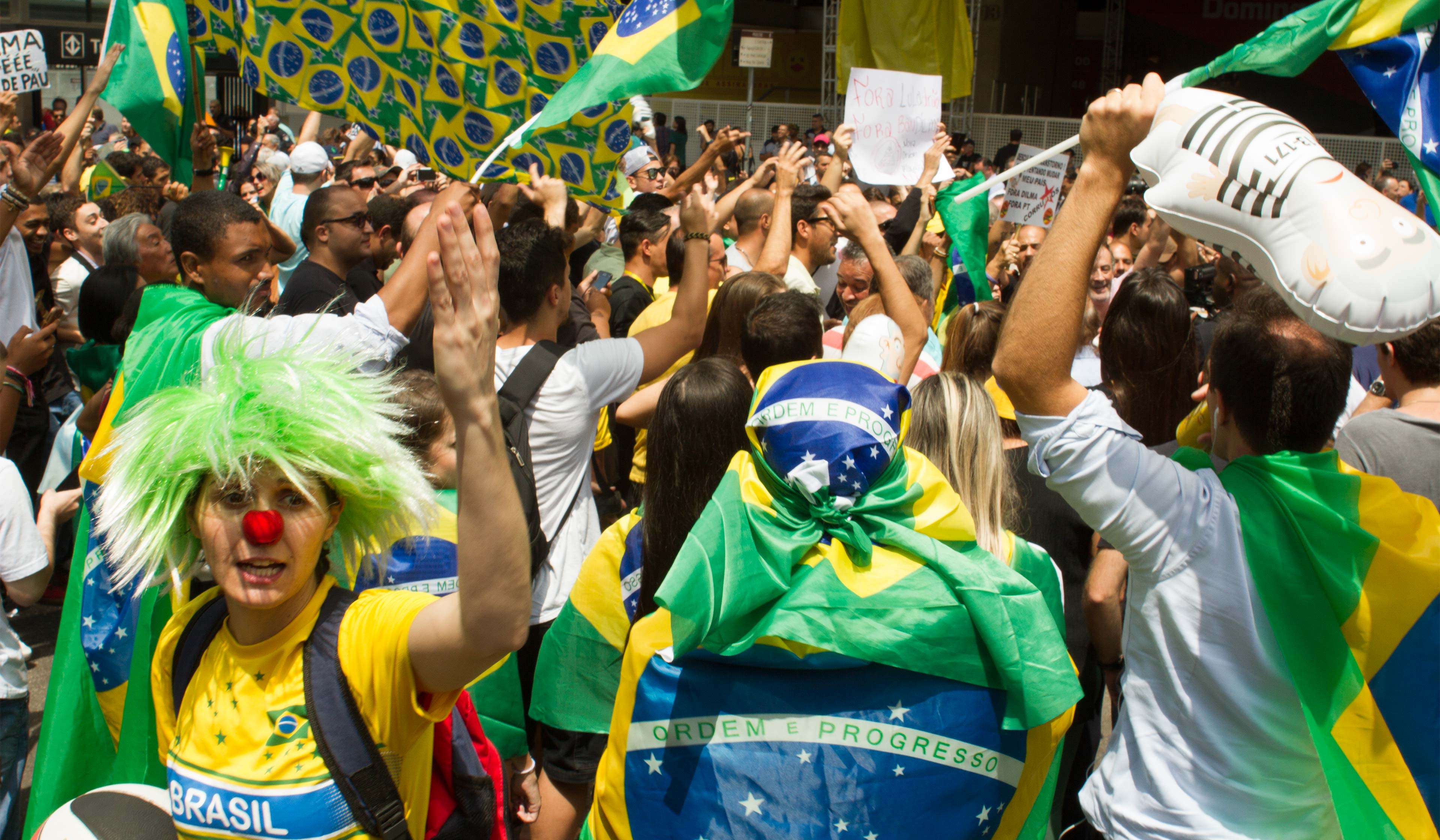 It’s not just geography that dictated these protests are distinctly middle class. Unlike most anti-government protests in the US or Europe (which typically have a leftward slant), this is a well-funded movement backed by the right-wing elite, against a progressive Worker’s Party (PT) government. The incumbents have a solid record when it comes to tackling inequality, and a strong voter base in Brazil’s working and lower-middle classes, their absence here is obvious. Despite limited participation, the unrest is dominating headlines; some would say this is stage-managed by the dominating Globo media network (think Fox News on steroids).

Still going strong into Thursday night, the protest began Wednesday evening, the wave of unrest sparked by a leaked phone call. The recording suggested Brazil’s president, Dilma Rousseff, had given her predecessor Luiz Inácio “Lula” da Silva a role in government to shield him from prosecution on charges of corruption, following his brief arrest in early March. After months of protests and dismal approval ratings, some commentators have suggested this could be the event that unseats Rousseff. 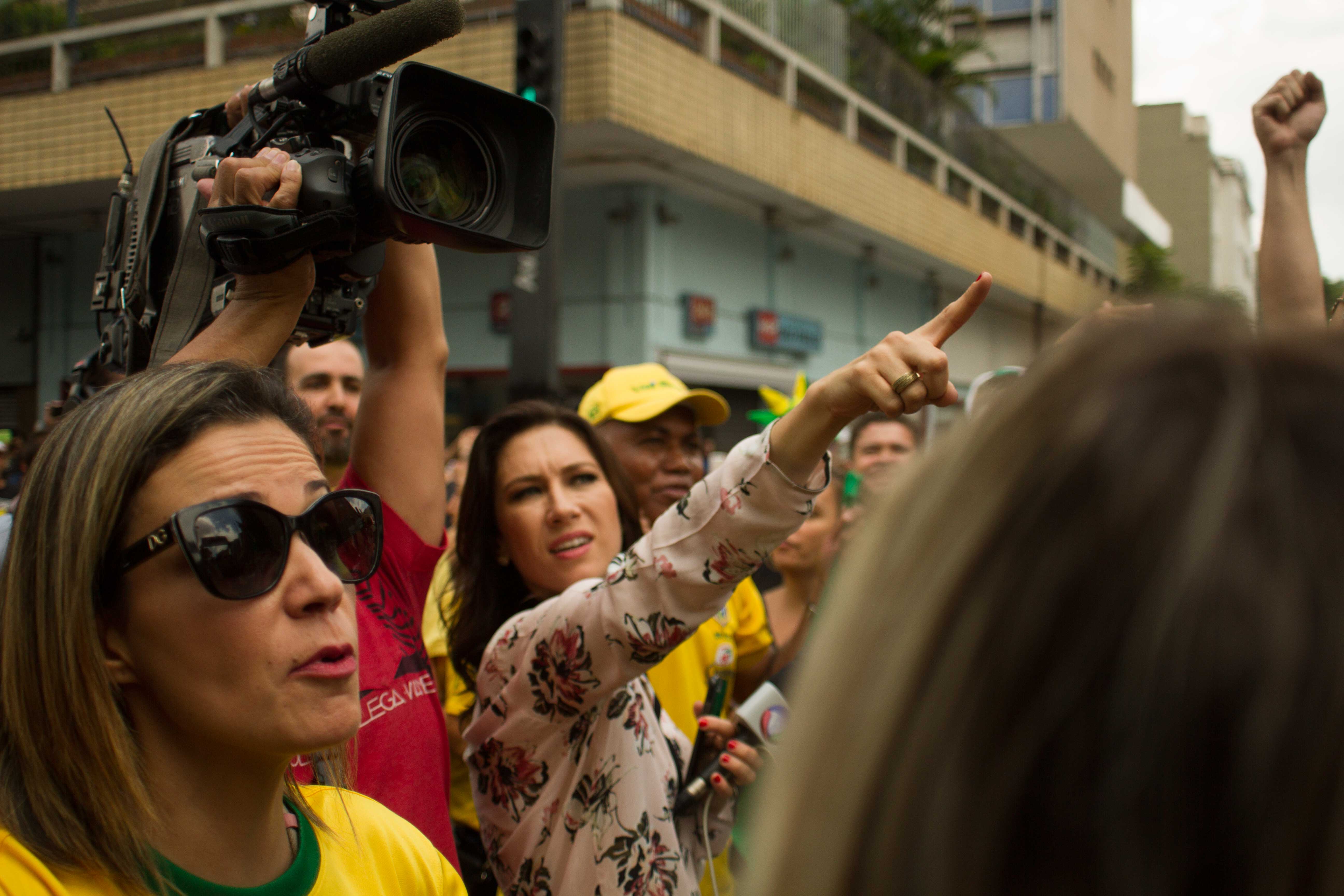 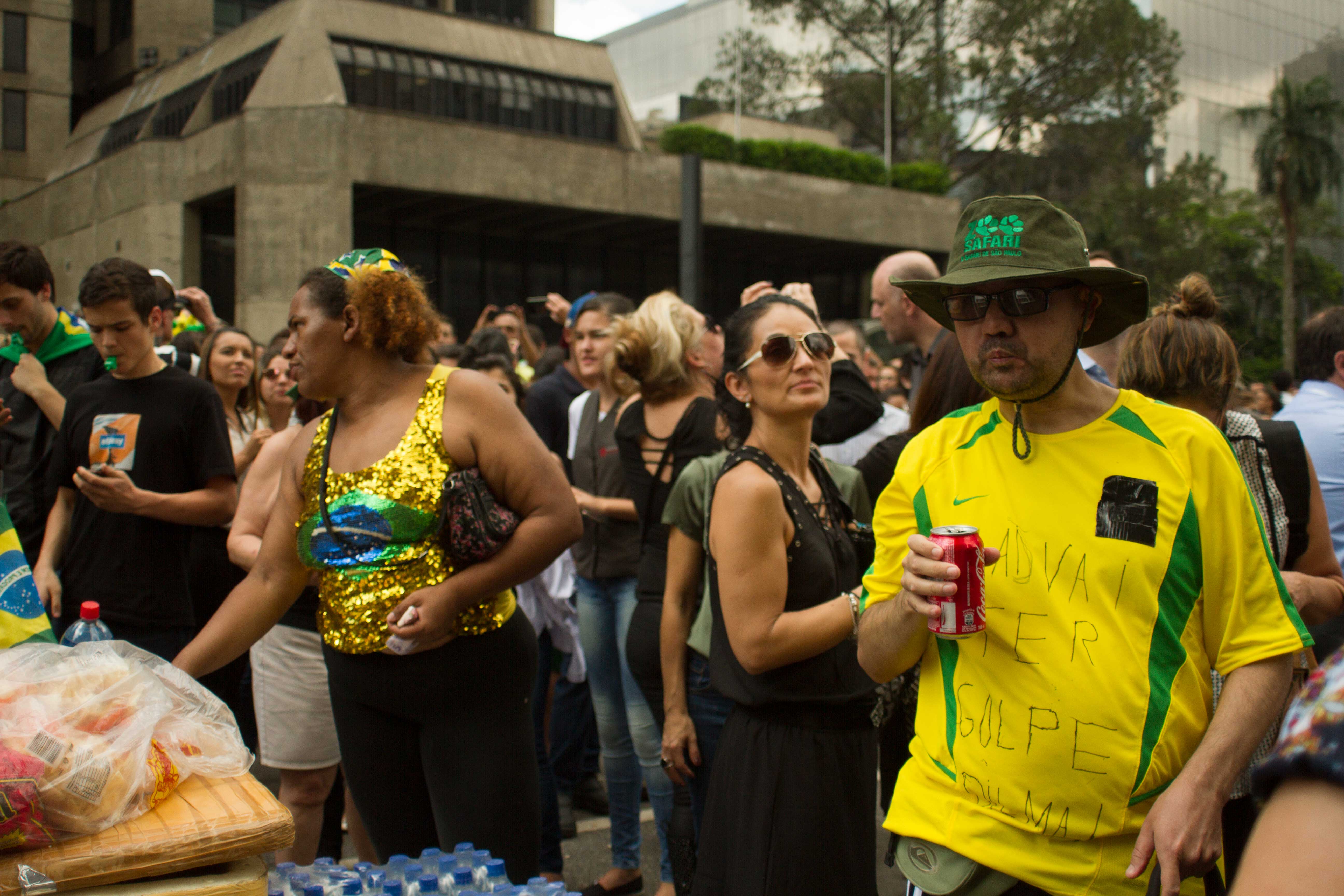 Having held the presidency from 2003, the Worker’s Party are arguably the most progressive government in Brazil’s history. While commentators of all persuasions find much to criticise, they have a strong track record when it comes to tackling poverty, a threat to Brazil’s unequal social order. Redistributing the fruits of commodity-fueled economic boom over the last decade, PT have used pioneering welfare programmes, such as Bolsa Família, a conditional cash transfer to the country’s poorest families, to help lift forty million people out of poverty.

With demonstrations reported in 17 of Brazil’s 26 states on Wednesday, this is the latest in a series of anti-government protests, as the worst recession in decades continues. Brazilians are also confronting the biggest corruption scandal in their modern history; centred on the state oil company, Petrobras, which has implicated much of the country’s political and business elite.

A two-year investigation known as Operation Carwash uncovered a wide-scale kickback and bribery scheme at the company. The findings suggested money was being extracted through malpractice, cash that was being funnelled to political parties, including Lula and Rousseff’s party, PT. Corruption at the state oil giant dates back far beyond this government, and was rife during the regime of former president Fernando Henrique Cardoso (1995-2003) of the PSDB party, who in his memoirs admitted hearing about it during his term in office – but chose not to investigate. Many are asking where the protestors were back then. 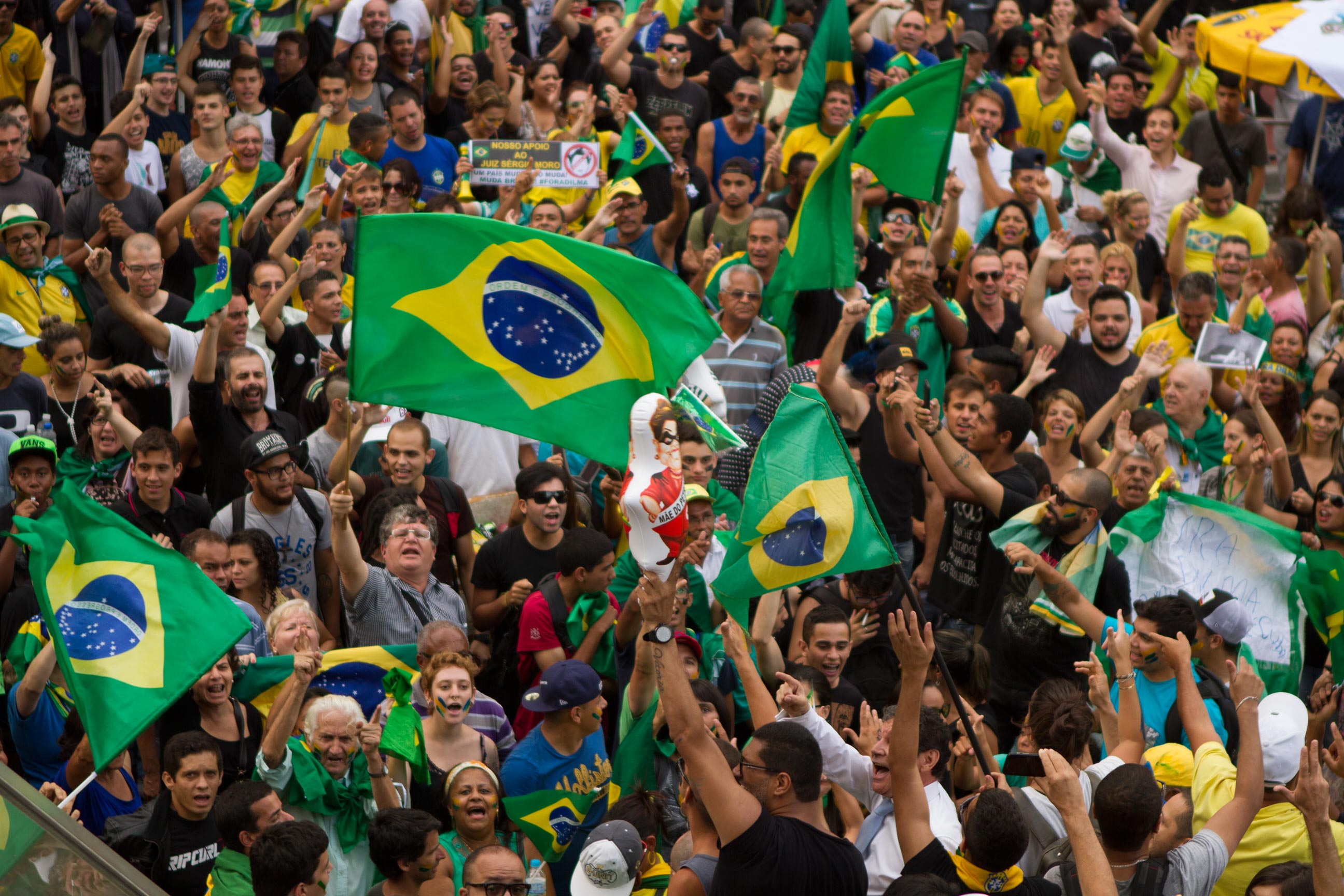 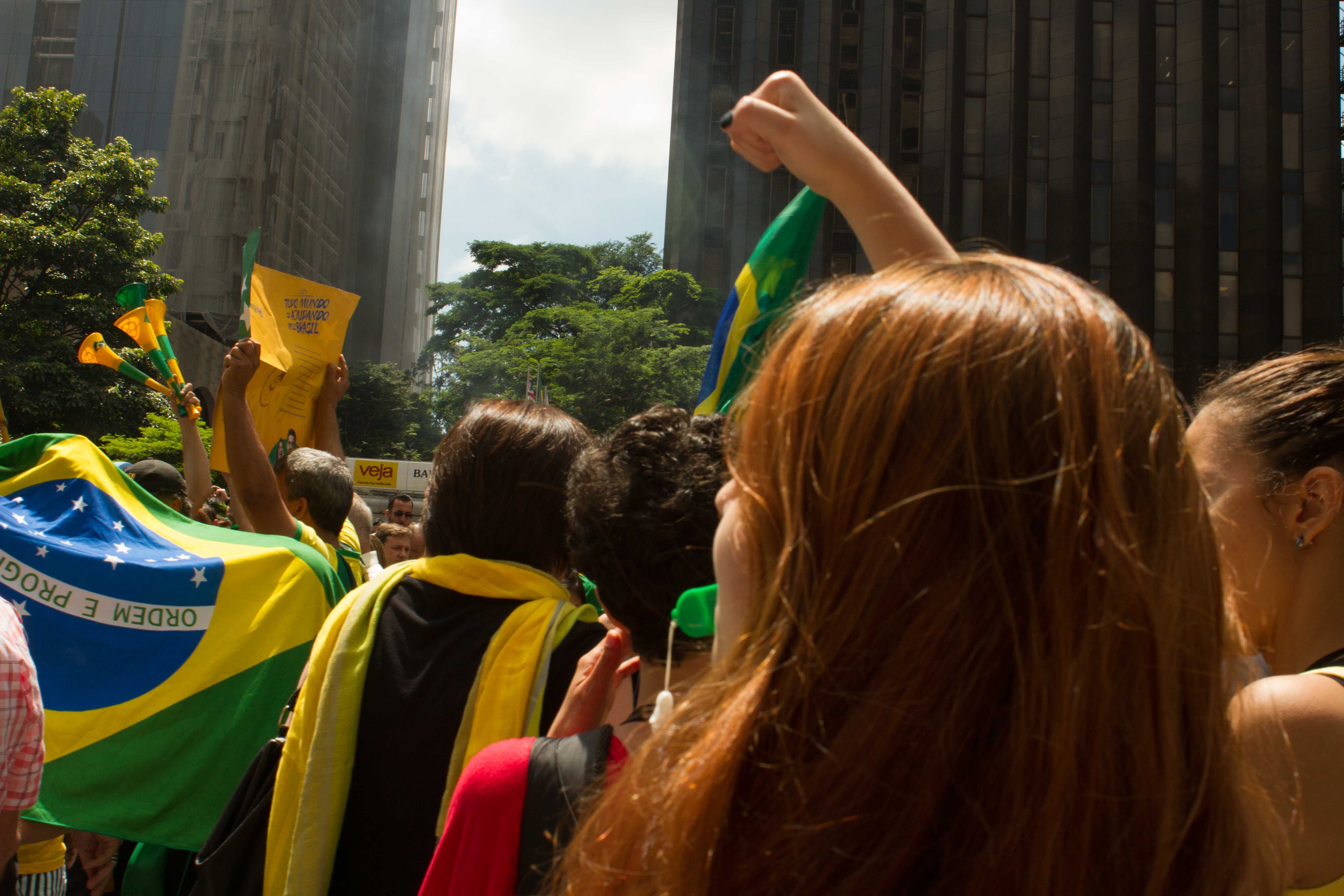 “I don’t know if this is a revolution, but it’s the start. I don’t know if we can do this, but we’re trying,” explains Audrea, 17, an advertising and marketing student at Faculdade Cásper Líbero, a private university in São Paulo. “We want a better country. We need more people, we need the whole country on the street.”

Like many others on Avenida Paulista, Audrea is frustrated with decades of corruption at the top of Brazilian politics and industry. “Most people in Brazil aren’t honest, but I think that the government needs to be,” he frankly suggests. 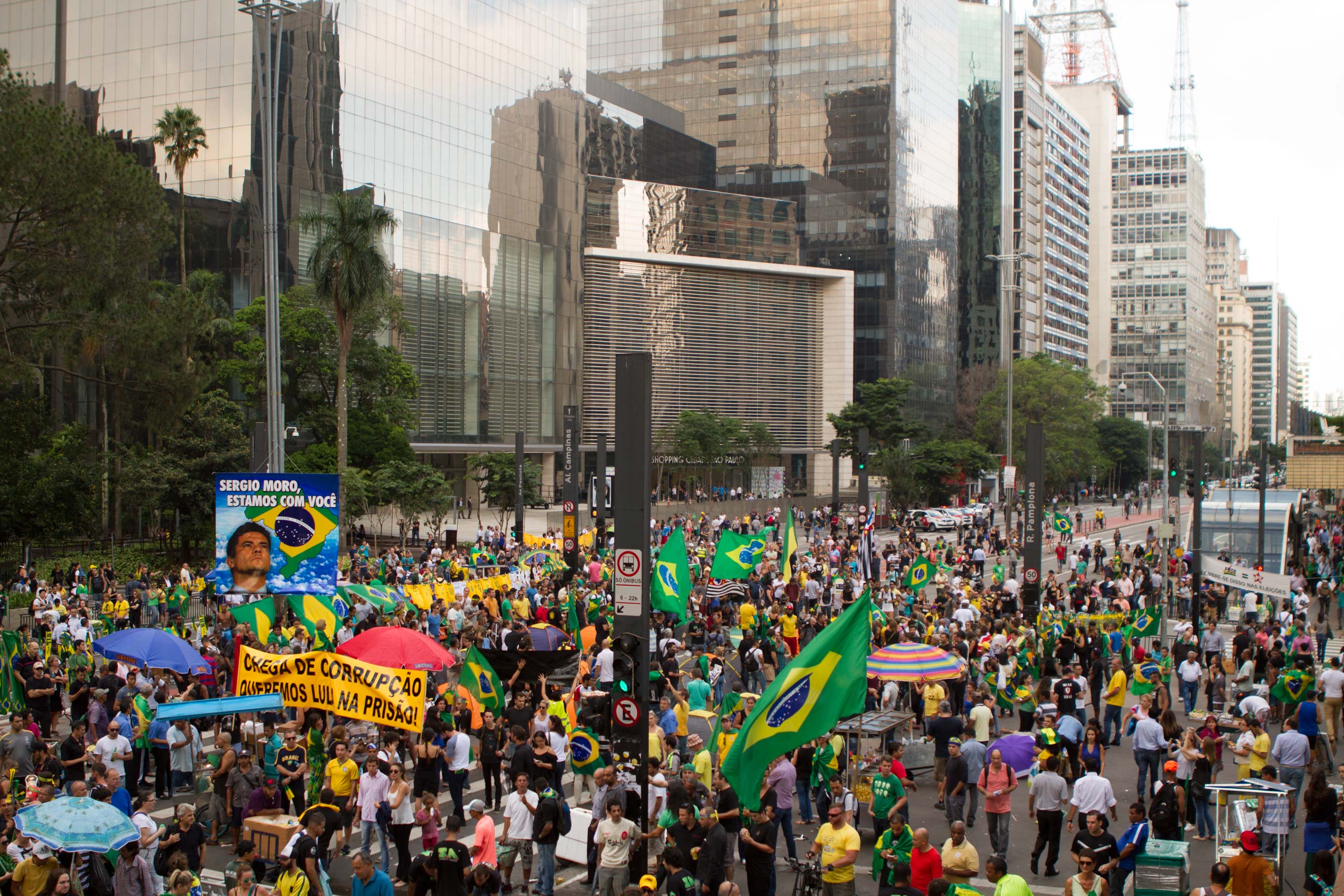 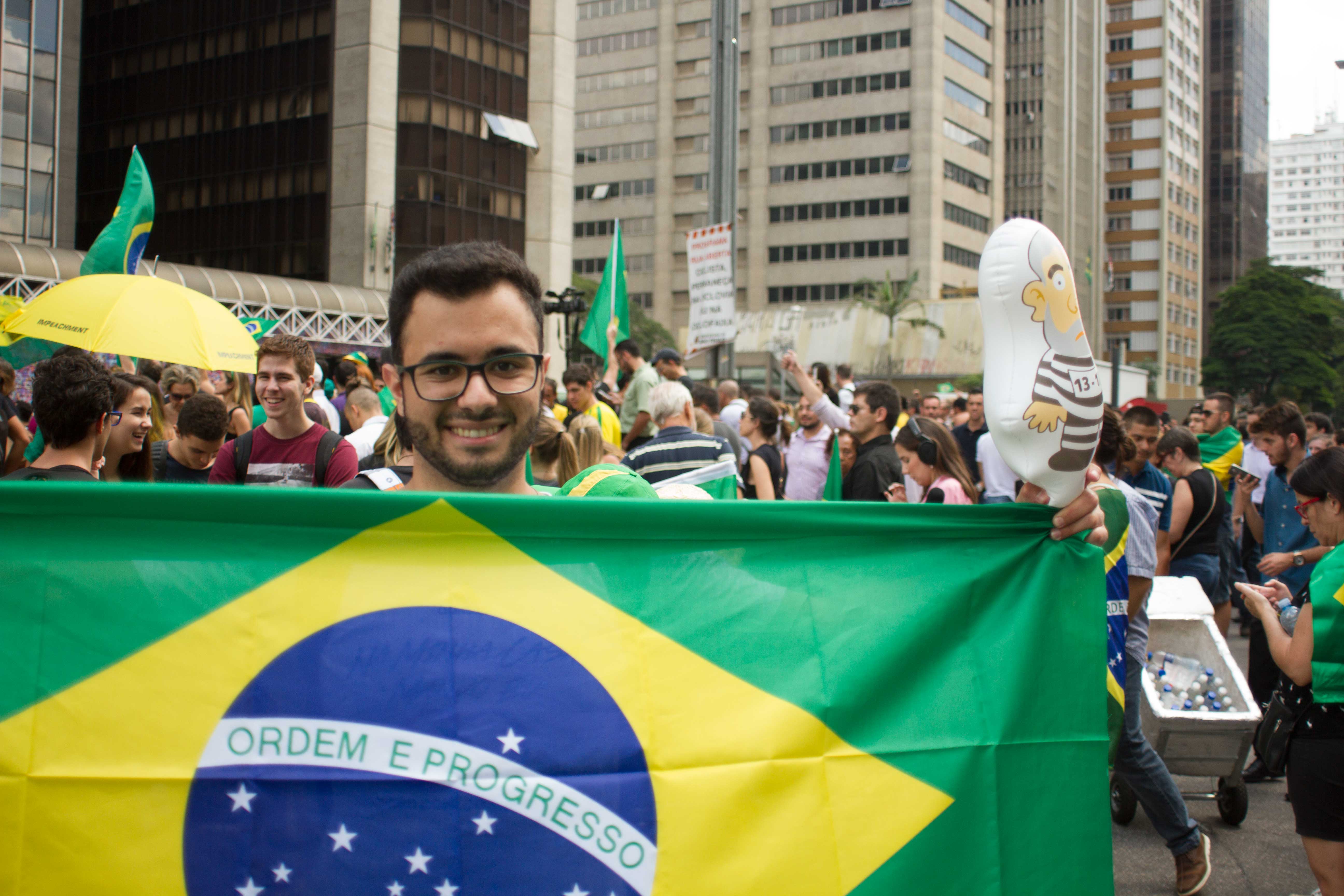 “The stealing of money, the corruption has been institutionalised,” explains Gustavo, 21, a business student. He explains how the biggest opposition party is equally embroiled in the scandal and reels of a list of party acronyms and names of politicians also involved.

“We want a new kind of government, a new kind of politics, a smaller state, more liberal,” Gustavo explains. “The alternative to PT doesn’t exist, so we are lost. We don’t know who will be our leader, who will be our guide in 2018. This movement has no relation with parties, it’s the people. We believe all parties are corrupt, so we don’t want them, we want something new.” 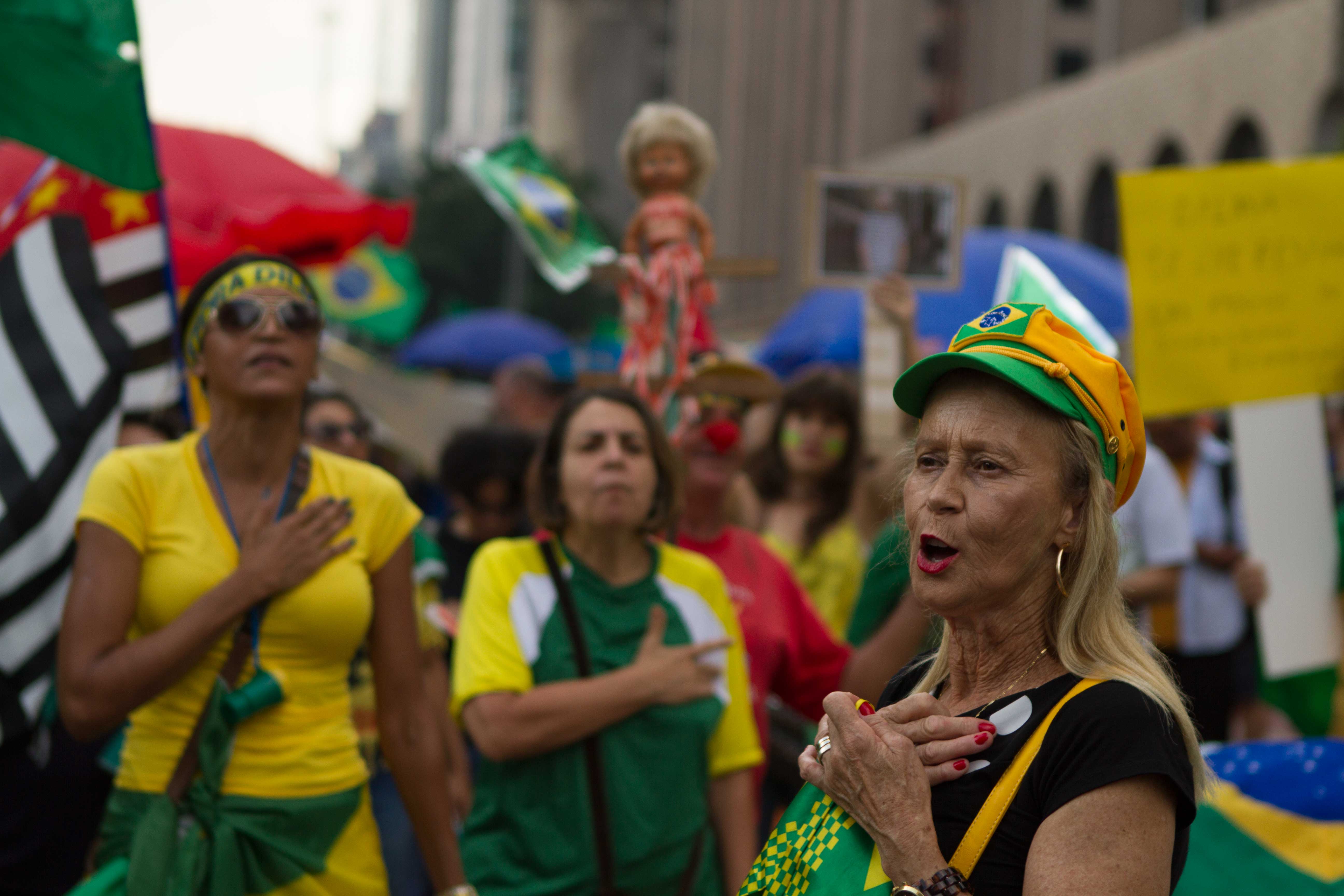 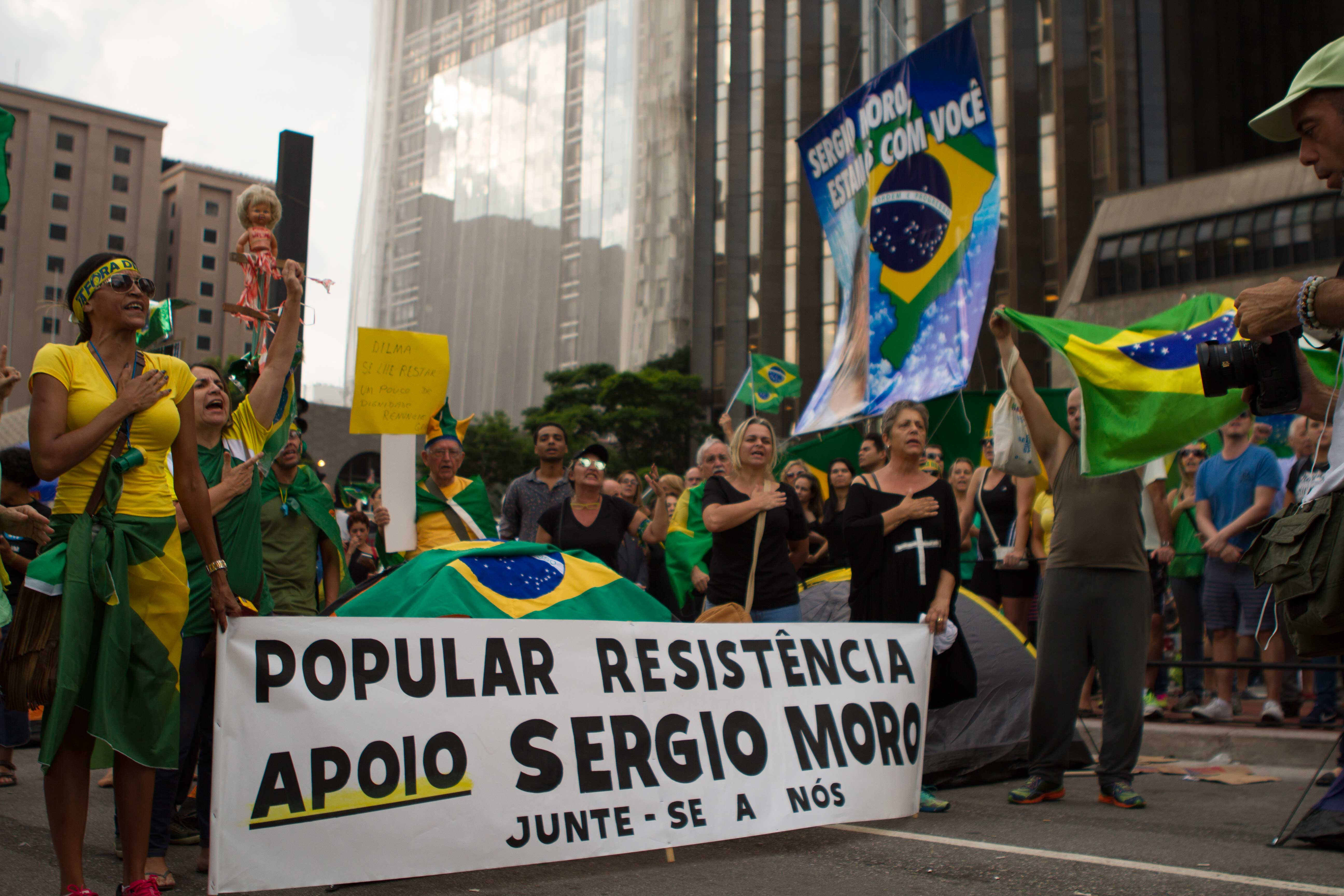 The protest may not be linked directly to any political party, but it’s supported by powerful interests. A visiting artist remarked, “I’ve never seen a protest with so much merchandise.” Protestors brandish inflatable dolls of Lula in striped prison fatigues, miniature inflatable rubber ducks, which have become one of the symbols of the anti-government movement, and other paraphernalia.

The passionate support the anti-government protests have received from media giant Globo has worried many with a sense of Brazil’s recent history. With no media regulation in Brazil, Globo have risen to become the largest media empire in Latin America, and have the second-highest revenue of any media company worldwide. Its reach hits close to half the population (a figure media moguls elsewhere in the world could only dream of), its influence “towers over Brazil like Rio’s Christ the Redeemer statue”, say the The Economist.

In 1964, Globo used its political muscle to enable a military coup against the elected president João Goulart, and Brazil spent the next 21 years under military dictatorship. With Globo reporters given tip-offs on impending police raids and nearly all leaked material appearing there first, some worry history might well repeat itself. 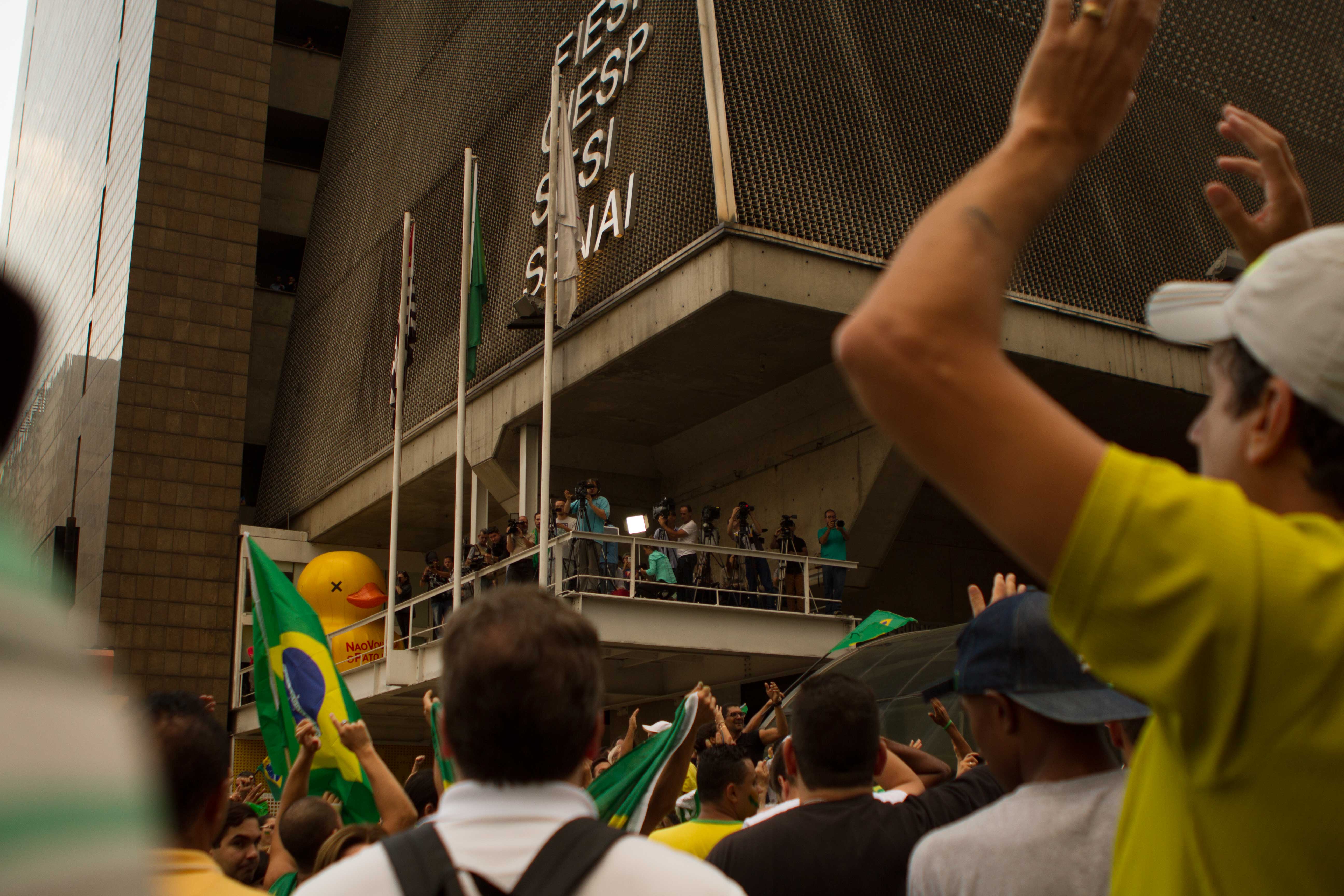 View of the FIESP media pen, from below 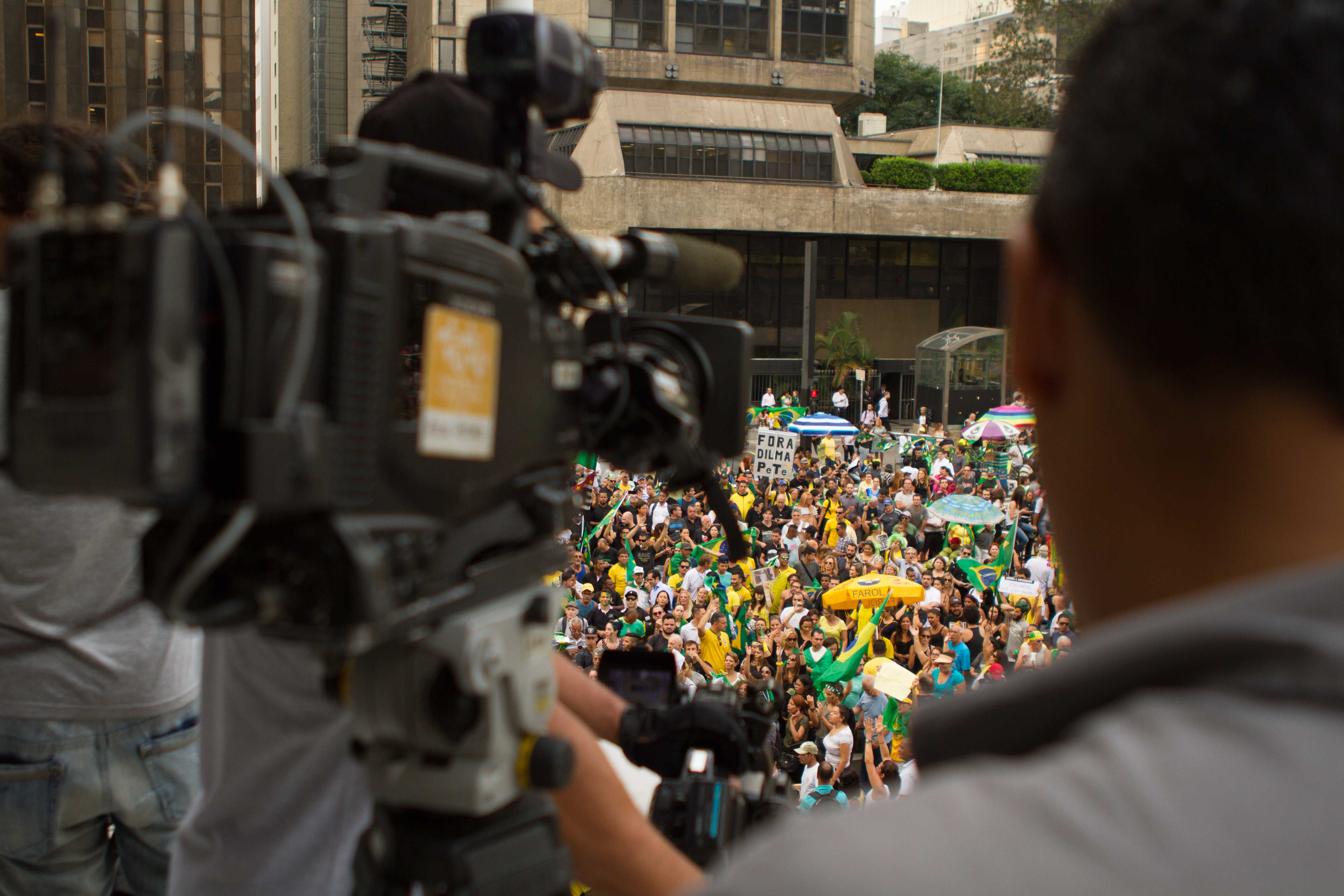 The view from FIESP’s media pen 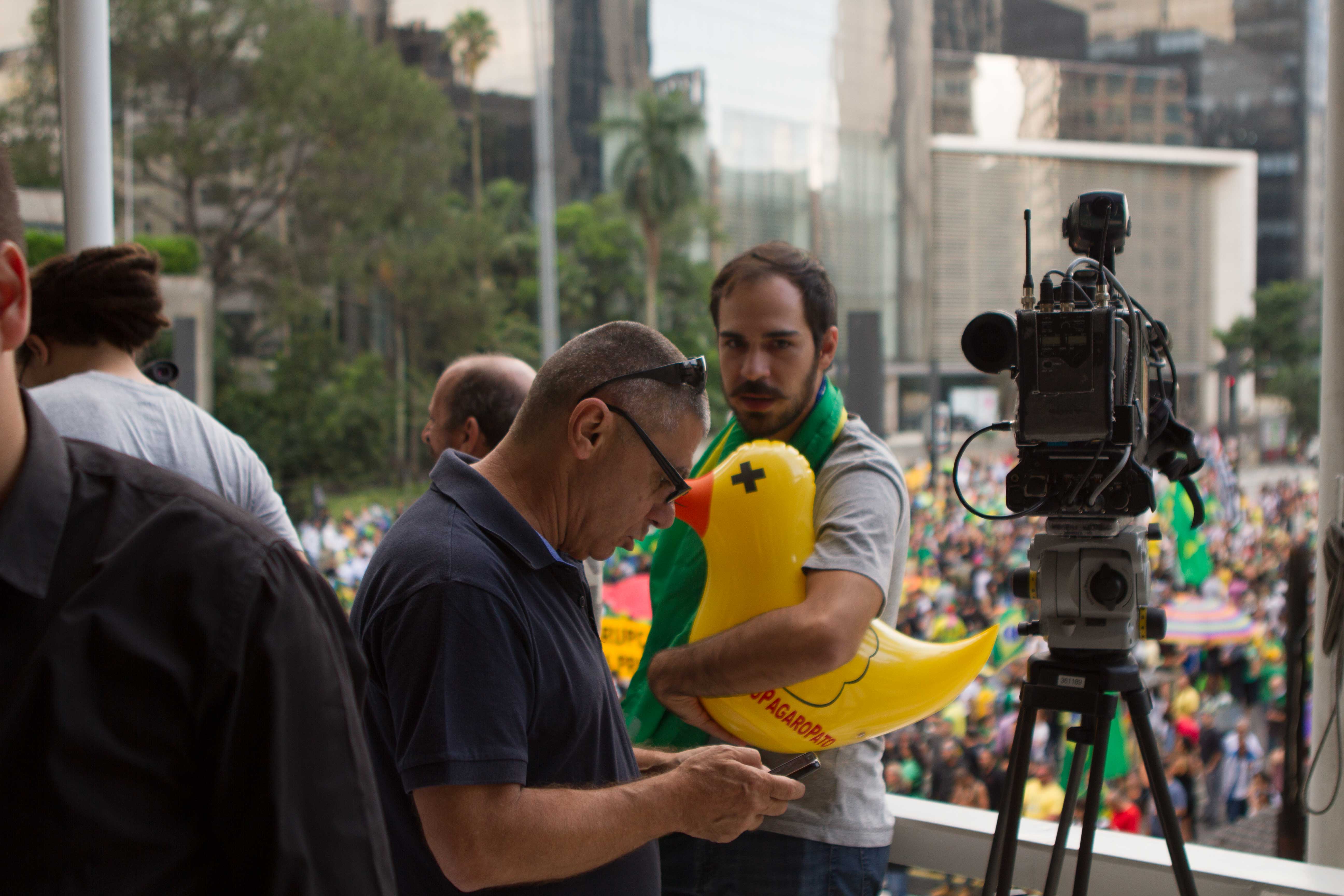 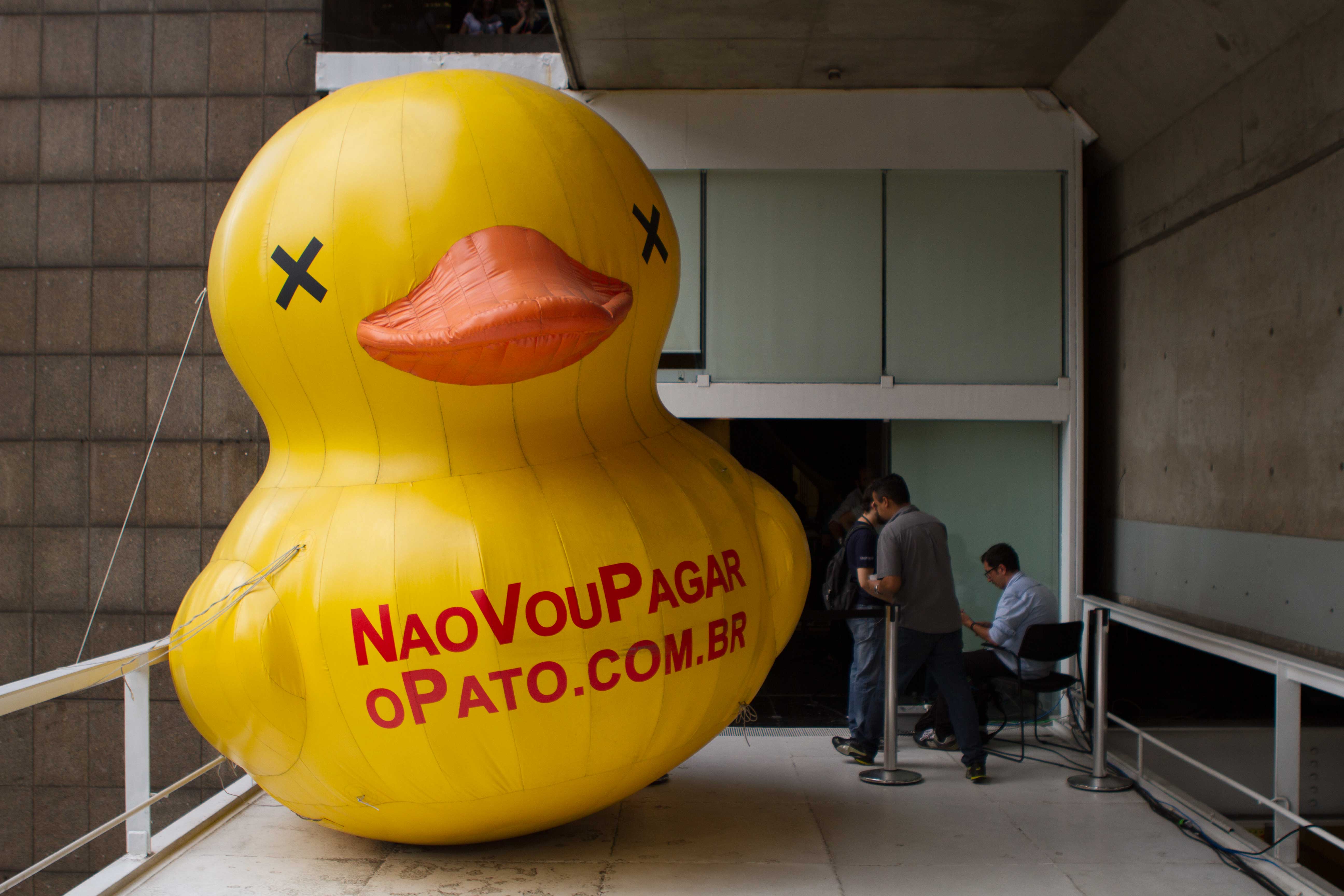 Rather than congregating outside a government building, ground zero is outside the headquarters of FIESP (Federation of Industries of the State of São Paulo – a Brazilian industry body). Due in part to Dilma’s plan to raise taxes to resolve the country’s fiscal deficit, FIESP openly supports the anti-government movement: its elevator doors are covered with ducky vinyls, its mezzanine becomes a buzzing media centre to cover the protest below, and each night a protest occurs outside they illuminate a giant Brazilian flag with a black stripe on the side of the retro-futurist pyramid’s LED screen. Its basement is also used to store the giant inflatable duck that sits outside the building and is where workers store and inflate the miniature inflatables distributed to the crowd. This protest is unashamedly backed by the corporates. 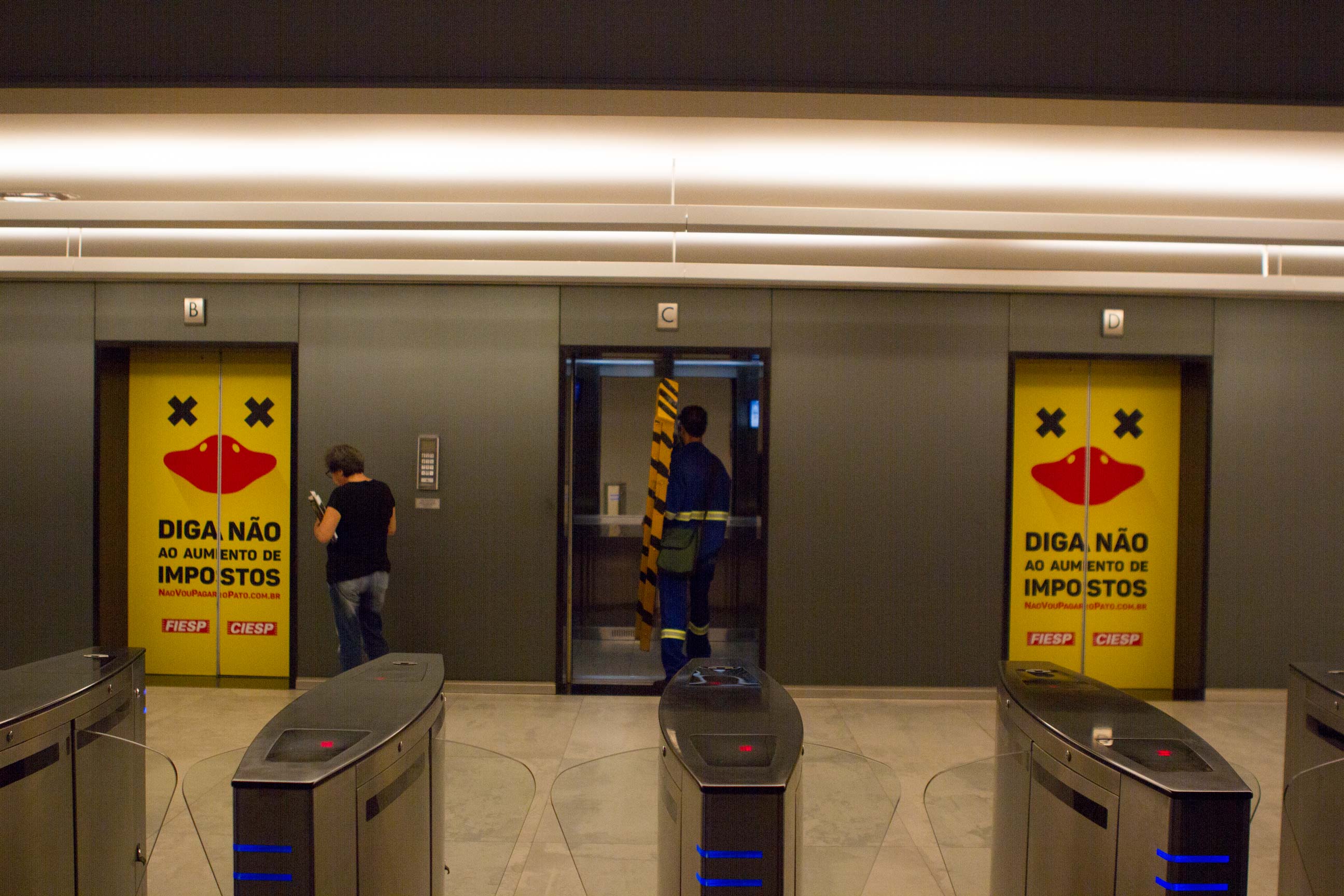 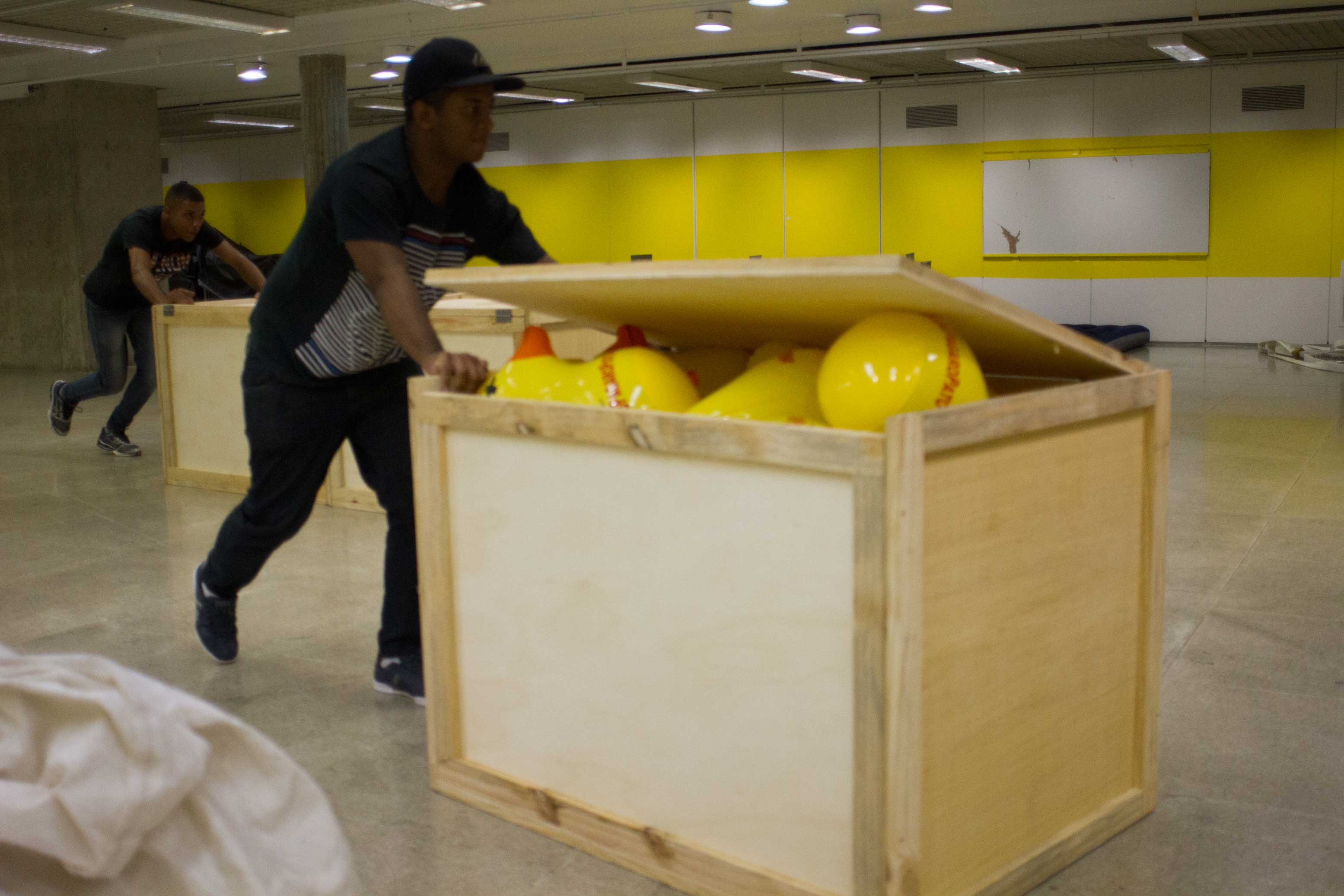 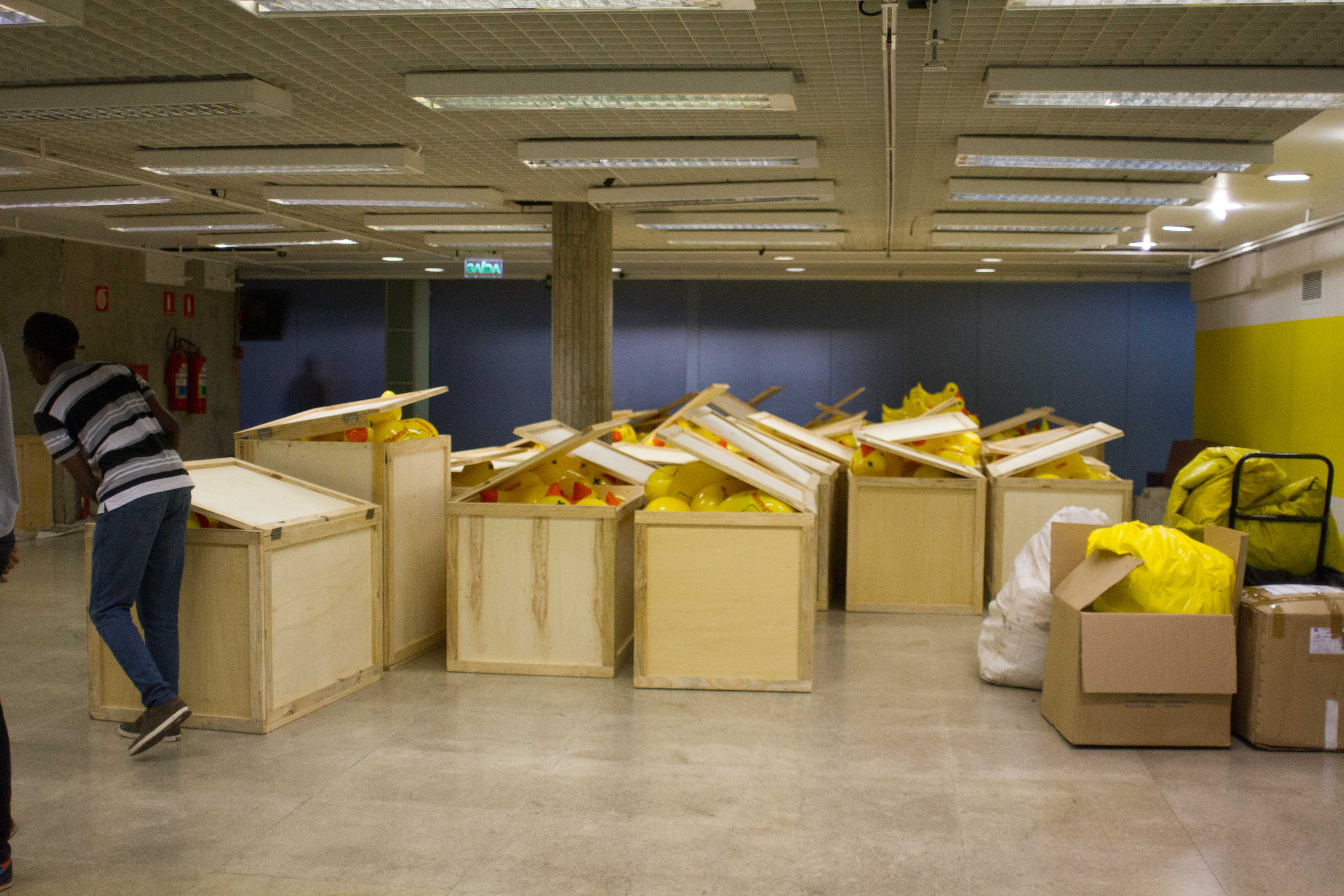 There are a few people on the periphery calling for a return of the military, but the realists in the crowd admit that with few palatable alternatives, there’s little chance of major change just yet. Gustavo is putting his hopes in the judiciary to combat corruption. “Sergio Moro [the judge leading the Operation Carwash investigation] and the supreme court are doing a great job fighting against the corruption, against the politicians,” he explains, “they are the last sign of hope for Brazilian people.” Corruption is notoriously rife where politics and industry collide, yet this operation is too limited in scope to catch all of it. Many are wondering if prosecutions will fall disproportionally on those with connections to PT. 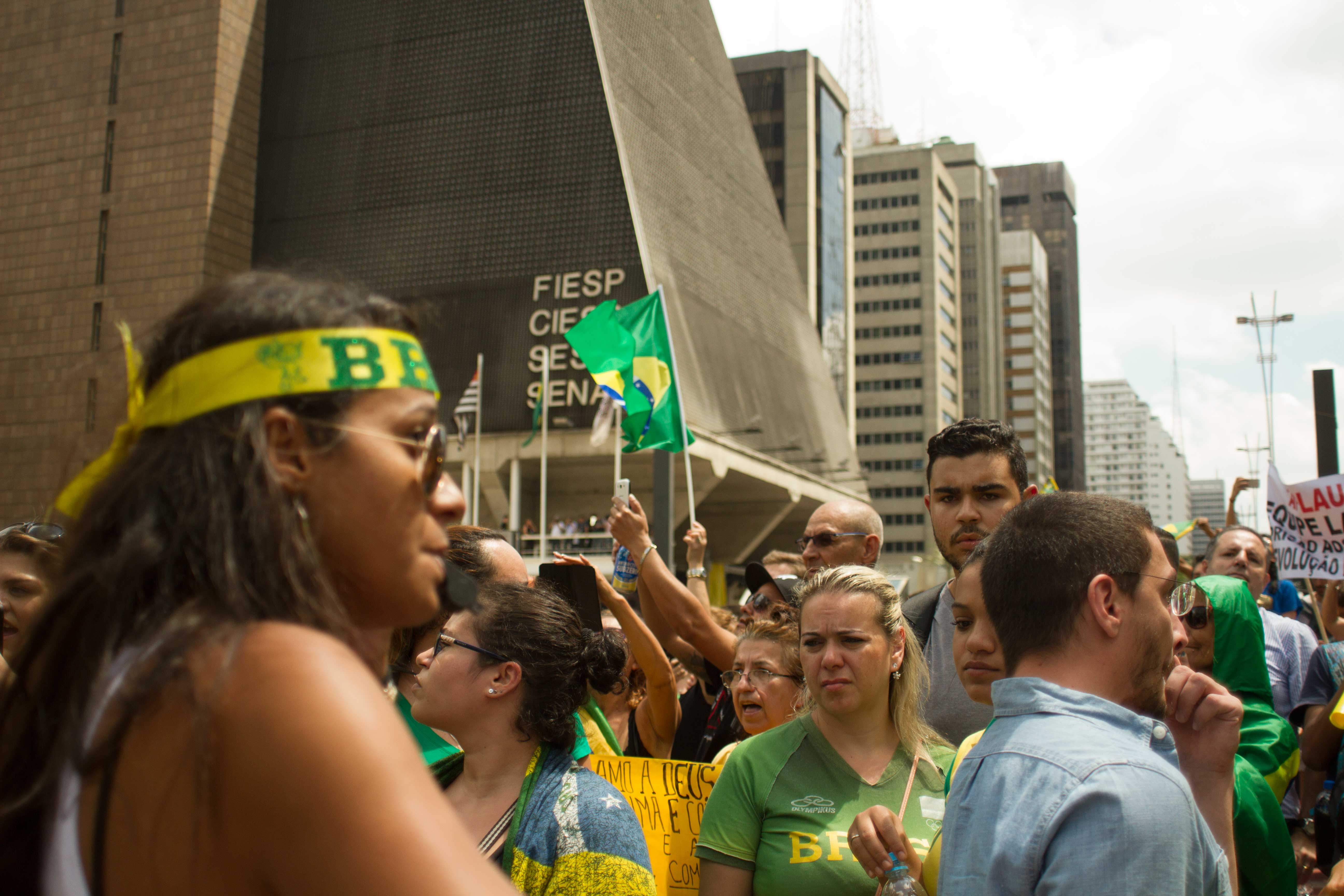 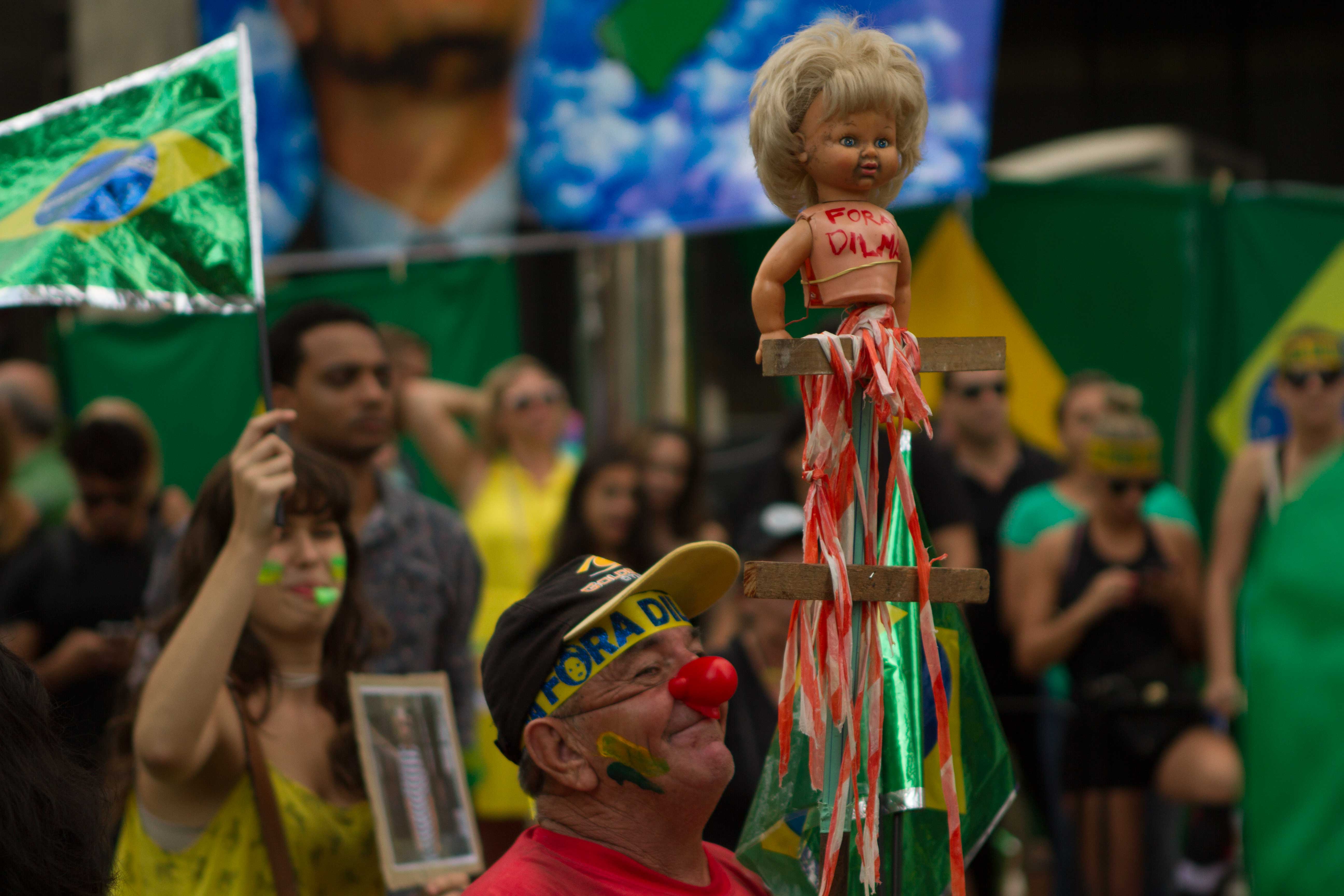 Discontent with the Dilma runs high across the country, as shown by the millions who marched at larger protests on Sunday, but the energy of the thousands gathered here today is unlikely to force her impeachment or resignation – which these protestors desire. They’ve assembled a village of (empty) tents that appeared Thursday afternoon to underline their commitment to ousting Dilma, but she’ll likely ride out this latest challenge to her leadership.

An anti-anti-government protest planned for the following day could be an in important gauge of the government’s support. It may not be a pro-government rally, but they also aren’t keen on this “right-wing bullshit”. Whatever happens, it’s unlikely to defuse tension in this deeply polarised country.

Linkedin
RELATED ARTICLES
OTHER ARTICLES
An account documenting gay men breaking lockdown regulations for holidays has reopened old wounds regarding shame and privilege.
People of colour get little representation in outdoor culture. But Black Trail Runners aims to change that.
Formed as Black Lives Matter protests swept the globe, Color The Water is out to reclaim Californian surf culture – one wave at a time.
In 1959, photographer Bruce Davidson, then 25, embedded himself in a gang of New Yorkers to capture the essence of postwar inner-city youth culture.
As COVID-19 cases soar and calls to close schools grow louder, pupils across England are mobilising online to pressure the government to scrap higher testing.
Youth activist and politician Athian Akec speaks to Caleb Femi about 'Poor' – a poetry collection exploring the strife and joys of young Black boys in 21st century Peckham.